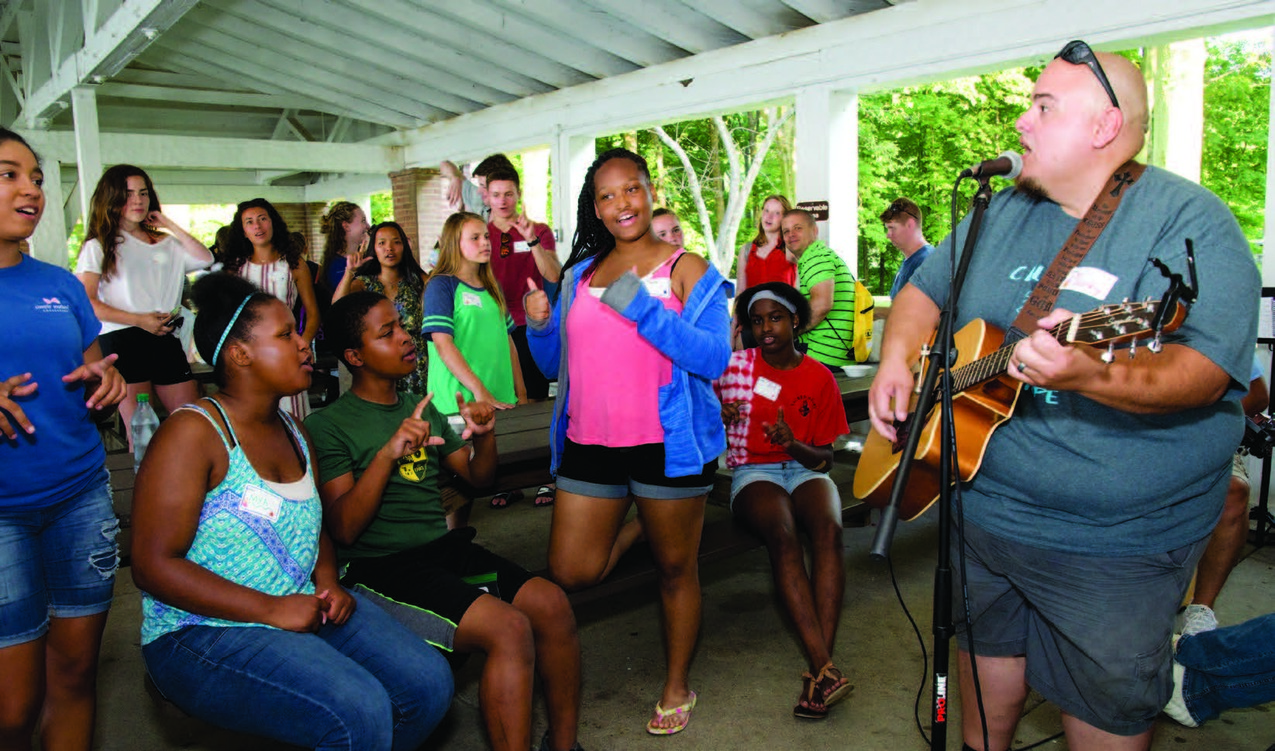 Youth and young adult ministry comes in all shapes and sizes. It’s definitely not one size fits all, say Dobie Mosier, Mark Delsander and Jackie Vigneault. Mosier is director of the Office of Youth and Young Adult Ministry and CYO for the Catholic Diocese of Cleveland. Jackie and Mark assist him.

From prayer services to retreats, book clubs to service projects, social gatherings to speakers, youth and young adult ministry is vibrant throughout the diocese.

“Young people are hungry for this connection,” Mark said.

The office “is committed to forming youth and young adults and those who accompany them into missionary disciples of Jesus Christ,” Dobie said. The staff works with parishes to empower young leaders, host dynamic events, support ministry teams, train adults and build faith-based coalitions with young adult movements and young adult groups. They serve young people up to age 39, helping them stay excited about and connected to their faith. Scouting programs also are overseen by YYAM.

Dobie said it’s important to meet people where they are, so YYAM had a presence at last month’s FEST. For the third year, Jackie said visitors to their booth could page through the Bible, highlight their favorite Scripture passage and jot down their name and the year next to it. There also was information available about programs and resources for youth and young adults.

In July, about 100 teens, youth ministers and family members turned out for a Fanning the Flame youth rally at Huntington Beach in Bay Village that was hosted by St. Raphael Parish, Bay Village. Bishop Nelson Perez mingled with the group and celebrated Mass at sunset on the beach. Fanning the Flame events are offered quarterly, Jackie said.

Young adults gathered at Lakewood Park in July for the annual CYA @ the Park event, coordinated by Coalition with Young Adults. Food, games and a sunset prayer service highlighted the evening.

Christina Hannon Luehring, CYA young adult engagement officer, describes CYA as a network, not an organization. “It’s a grassroots initiative that evolved over the years. The Holy Spirit moved it in a lot of ways since its creation in 2006,” she said.

Books & Beaches, a summer book club/social group, was organized by Father Patrick Anderson. The loosely structured group met for 5:10 p.m. Mass on four Tuesdays in July and August, then had dinner at a local restaurant, went to Edgewater Park for a book discussion and visited an ice cream shop before heading home.

“I talked to a number of young adults and asked what type of things they’d like to do during the summer,” said Father Patrick. “Most didn’t want anything too structured,” he said, so the idea of a book club/social group evolved, with each person paying his or her own way. The group was excited to welcome Bishop Perez, who celebrated Mass, to the dinner portion of the first gathering.

Another option for young adults is Young Catholic Professionals, which was founded in 2010 to help driven, Catholic professionals in their 20s and 30s connect with each other and grow in their faith. The Cleveland Chapter is affiliated with a national organization and the group engages young Catholic leaders with seasoned Catholic professionals. “Working in Witness for Christ” is its slogan and the group calls on the intercession of St. Joseph the Worker, its patron saint, to remind them of the importance of stillness, reflection and prayer. YCP hosts regular speaker series, panel discussions, retreats and other events.

“We can have integrity, lead conversations with righteousness and be evidence of the role that we are allowing God to play in our lives,” said Sarah Yantek, president of the Cleveland YCP Chapter.

The ITE Project, which is based primarily in the Akron area, is gaining traction. Brooke Roberts of St. Francis de Sales Parish in Akron, one of the group’s leaders, said the nonprofit was established in 2014. ITE is based on the closing words of the Mass, Ite missa est. It’s also known as the “go forth project” because Brooke said participants are formed and sent back into the community.

The ITE leadership group plans service projects, retreats, adoration and other events. There is no formal membership in the group. “People come and go,” Brooke said. The fall weekend retreat will take place next month and they are planning a fundraiser in December. The goal is to hire a full-time social media marketer, she added.

“This diocese is alive and we want to see it become more alive,” Brooke said.

Youth ministry is filled with teens and pre-teens who are passionate about their faith, Mark said, and that will be evident when an expected 2,000 to 3,000 middle-schoolers from Ohio and Michigan — including a group from the Cleveland Diocese — gather on Oct. 13 at Bowling Green State University for Holy Fire Great Lakes. There will be Mass, speakers and other activities at the daylong event.

And then in November, about 20,000 high school students — including Bishop Perez and a contingent from Cleveland — will head to Indianapolis, Indiana for the National Catholic Youth Conference, which takes place every two years.

On the parish level, Dobie said youth ministry ranges from locally created programs to meet the needs of young people to national or international programs like Life Teen, which has been very successful at St. Mary Parish in Hudson. The ministry is marking 25 years at the parish. Its goal is to lead high school students and their families into a deeper relationship with Christ. Over the years, Life Teen participants have gone on pilgrimages, ski trips, summer camps and leadership conferences; participated in adoration and more. In May, the parish marked the seventh consecutive ordination of a parishioner — including two brothers, Father Rich and Father Dan Samide, both of whom credit Life Teen with helping them answer the call to their vocation.

TEC, or Teens Encounter Christ, is a movement of spirituality with the goal of offering older youth and young adults an experience of the paschal mystery of Jesus. It began in 1965 in the Diocese of Lansing, Michigan and involves an adult faith community who invite youth to share with them their life in Christ. Witness talks are given by adults, except the “growth and ideals,” during which the young people talk. There is time for discussion, table groups, music and reception of the sacraments.

At Sacred Heart Chapel in Lorain, which has a large Hispanic population, young people help prepare pastelillios — stuffed meat pies that are similar to empanadas— and sell them on the fourth Sunday of each month. Eric Gilles, youth minister, said students prepare the dough and a parishioner makes the meat filling. They also make and sell breakfast sandwiches. Proceeds benefit the youth ministry program.

Sundays are a big day for youth at the parish, Eric said. “We started a two-hour ‘pray and play’ during the summer in the gym so the young people can come together and build community. In the fall it will expand to four hours,” he said. The students break into three groups: junior high, confirmation and high school. Eric said the sessions include game time in the gym, religious instruction and a light meal. Young adults from the parish assist with the program.

“We have a goal this year: to learn the Hail Mary in Spanish,” Eric added.

St. Ambrose Parish in Brunswick involves youth in its hospitality ministry. St. Francis of Assisi Parish in Gates Mills, which uses Life Teen, regularly attracts a large group of young people for its First Fridays at Francis, which include adoration, praise and worship, confession and social time.

“Young people start to make decisions at about age 13,” Mark said, stressing the importance of having a foundation in place to help them make the best decisions.

Dobie said parishes may lose students at the junior high level if they don’t invest in programs to help them as they transition to high school. “Parishes that invest in this reap the benefit,” he added.

“This new generation is not our future. They’re here now,” Bishop Perez said. “We need to listen to them and find a place for them at the table.”

This story was featured in the September-October edition of Northeast Ohio Catholic magazine. Click HERE to read the entire digital edition.