“RUN WITH ME,” Caryn Kornaker calls out to people along the route as she runs with the Sacred Heart of Jesus CYO cross country team. Caryn loves to run and also participates in the 100- and 200-meter events and the long jump with the Sacred Heart School, Wadsworth track team. She’s a Special Olympics athlete, too. Her dad often accompanies her on the 2-mile CYO cross country runs to ensure she follows the course.

“At the end of a race, I wind up crying because everyone looks out for her and cheers her on. They accept my child and give her a normal life,” Catherine said. “CYO families are accepting of her and she is just like everyone else,” said Catherine Kornaker, Caryn’s mother.

Caryn, an eighth-grader with strawberry blonde hair, blue eyes and a broad smile, is the youngest child of Catherine and Greg Kornaker of Wadsworth. By all accounts, it’s a miracle she’s here — let alone an athlete.

Caryn-Anne Lillian was born by emergency caesarian section about a month early — with complications for both mother and baby. “We had her baptized immediately because she had so many issues. The priest even put a pink rosary in her bassinette,” Catherine recalled. 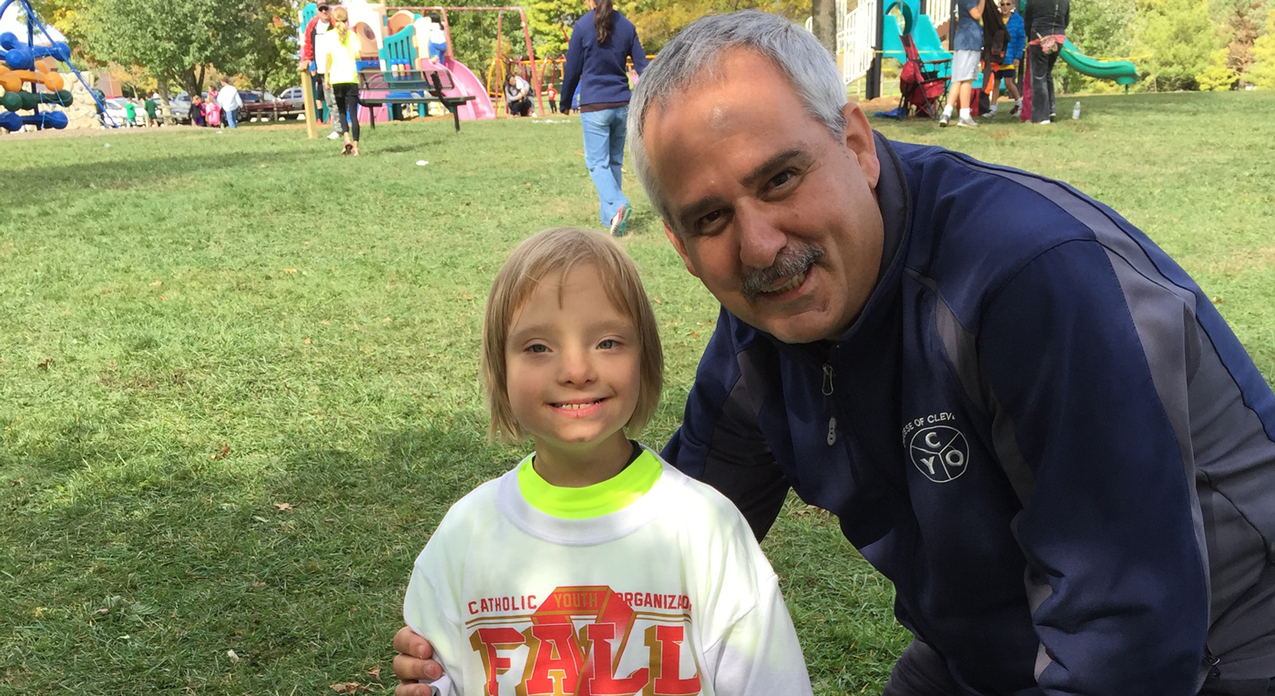 After her birth, the Kornakers learned that Caryn had Down syndrome. “It was nothing but bad news for the next few days,” Catherine said, as they learned that their daughter also had a heart defect and thyroid problems. Caryn spent about a month in the hospital, but rallied. Her parents are devoted to her care. “My husband said we brought her into this world together and we will care for her together.”

She sees a cardiologist twice yearly and takes several medications, but Caryn is a high-functioning special needs student who has attended Sacred Heart School since kindergarten. She has an aide, an individualized education program — also called an IEP — and a Jon Peterson scholarship that helps with her education expenses.

“We don’t spoil Caryn. She’s treated like a regular kid. She has to learn that she’s like everyone else,” Catherine said.

“We’re hoping she can continue her education at a Catholic high school,” Catherine added, noting all of their children — Christie, 30, a school psychologist in Wisconsin who was married recently; Matt, 26, an actor/comedian who lives in Chicago; and Aaron, 17, a senior at Archbishop Hoban High School in Akron — are products of Catholic schools.

Caryn loves singing, dancing, books, watching “The Brady Bunch” on TV, school — where she is an excellent student — and sports. Because of her medical conditions, she cannot participate in contact sports, but after watching Aaron run with CYO, she decided to try. They hope she can continue running with CYO in high school.

“Caryn never met a stranger. Everyone knows her,” Catherine said. “She loves going to the Knights of Columbus fish fries. They spoil her and give her extra fish,” she said. Caryn also loves ethnic foods like pierogi and cabbage rolls, as well as Italian food.

And she enjoys dancing with the Brecksville- based Living Traditions Folk Ensemble, an ethnic dance group that often performs at church festivals. Catherine said the troupe welcomed Caryn and made her feel at home. For a time, Catherine danced with the troupe. Caryn and Aaron were partners when she was younger, but Caryn also dances alone.

Caryn attends Mass regularly and sometimes takes up the gifts. Her mom said she likes going to church: “It’s what our family does.” She’s also made her confession and first Communion.

“I don’t believe Caryn is an angel by any means. Caryn is a seeker of angels and saints here on earth. She helps God mark those angels on earth and when those people arrive in heaven, Jesus knows they were marked by Caryn and they go
straight to heaven.”