More than 100 high school-age boys and their fathers or mentors participated in the first Young Catholic Men’s Conference on Feb. 2 at the Center for Pastoral Leadership in Wickliffe. 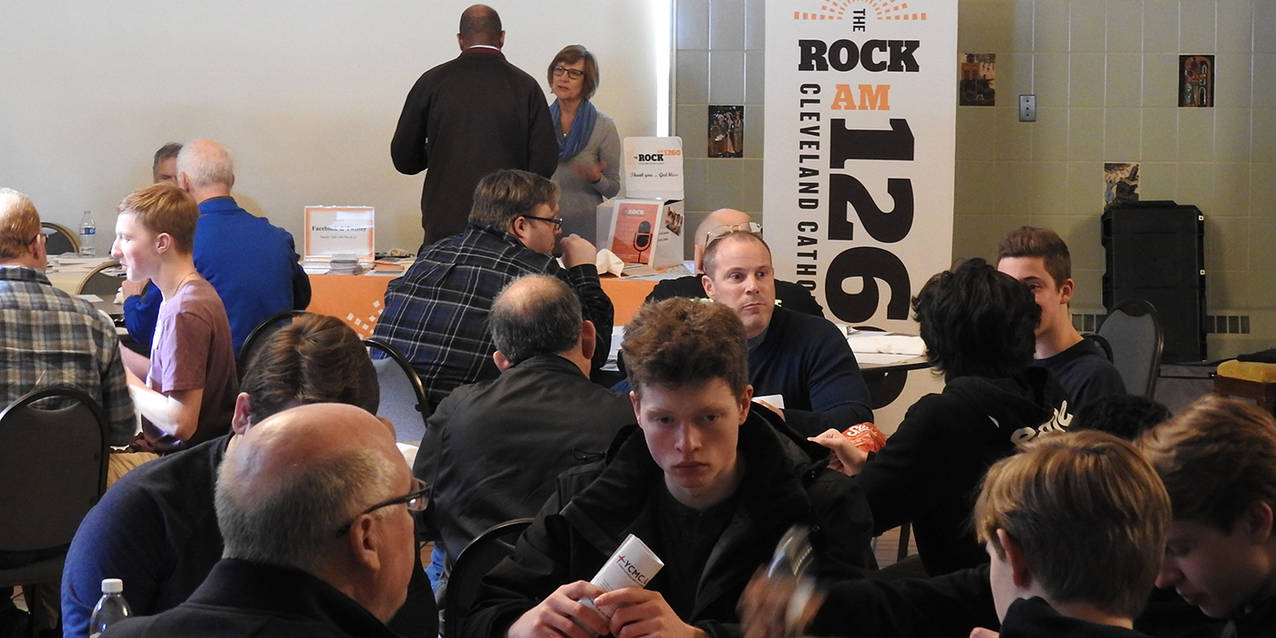 The conference, which took more than a year to plan, was a day filled with speakers, prayer, fellowship and food. The event was produced by a group of committed lay Catholics with the cooperation of religious in the diocese. Organizers said they recognize the vast challenges of Christian manhood. The young men in the community are not just the future of the Church, they are today’s Church, they added. YCMC is the Church reaching out to these young men to fortify their manhood and empower them in the world.

The day began at 8 a.m. with check in and a continental breakfast, followed by keynote speaker Chris Padgett’s presentation. Paul Koopman, a youth minister who was a member of the organizing committee, served as emcee for the day.

The group split into two tracks: dads/mentors and the boys. There also were some general sessions. In the morning, the adults heard Father Patrick Schultz, parochial vicar at Communion of Saints Parish. He was ordained in May 2016 and discussed his vocation and discernment. The boys could choose three breakout sessions from among four topics.

“I remember sitting in holy hour and reflecting,” Father Schultz said, recalling that he heard Jesus calling him to the priesthood. “I was terrified at the knowledge that he was calling me,” he admitted, adding “we are afraid of letting Jesus into parts of our lives.”

Father Schultz compared Jesus’ call to an angry landlord trying to get in – but you don’t want to let him in. Once he finally opened the door, “it was the Christ Child. The powerful and mighty Lord was willing to become a small child to not frighten us,” he said.

Trusting in the Lord as St. Faustina did is the key. Father Schultz said we may be afraid to let Jesus in because we fear the vulnerability. “But we need to trust him.”

He shared two video clips to help illustrate his point: one from the 1990 movie “Awakenings” and another showing British Olympian Derek Redmond who tore his hamstring shortly after the start of the 400 meter race in the 1992 Olympics in Barcelona, Spain.

In “Awakenings,” catatonic patients awakened for a short time after receiving the drug L-Dopa. The movie looked at how a patient and a researcher dealt with their vulnerabilities. In Redmond’s case, his father saw his agony and darted from the stands to help him finish the race. 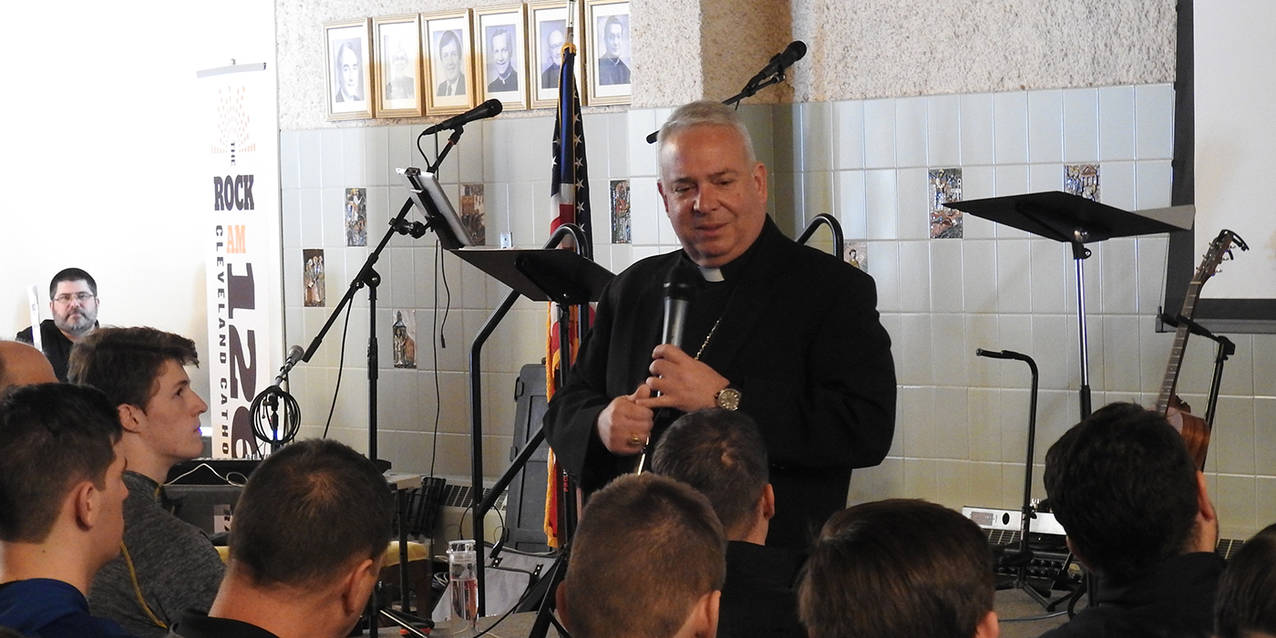 “No one remembers who won that race but everyone remembers the father running out to help his son,” Father Schultz said. “And no one was more proud of Derek that day than his dad.”

He said you don’t know you’re loved if you’ve never been that vulnerable. “This could be the day that changes your life,” he added.

Father Mark Latcovich, president and rector of Borromeo and Saint Mary seminaries, introduced Bishop Nelson Perez who addressed the entire group. Father Latcovich also shared a story about discerning his vocation. He wanted to enter the seminary but his father, a welder, was concerned about the cost. Then one day he saw his father nearly in tears as he prayed. He learned that his father had bought a parish raffle ticket from a friend and won first prize, which was more than enough to cover his first year at the seminary.

He said Bishop Perez asks priests to do three things: be good Christians, be good disciples and be good priests. He also helps them to achieve these goals. “Part of the formation process is accompaniment and the bishop accompanies us,” he added.

Bishop Perez told the gathering that there is a difference between hearing and listening. He said it’s easy to hear the wrong thing, but if you listen, you will know the difference between right and wrong. The voice we should be listening to is Christ, who accompanies us all the time. “And that voice – Christ -- is also calling us to accompany others, to encounter them with generosity of heart; to be there.”

He said the apostles, whom he called “misfits,” had a tough time because they never really understood what Jesus was trying to tell them. “He poured his heart out trying to get them to understand. We’d have never hired them, but look at what they did. One betrayed him, one denied him and the rest ran for the hills,” yet the message they shared lives on more than 2,000 years later among millions of Catholics.

He said Jesus acknowledged that the apostles made mistakes, but he had a plan for them. “Sometimes we don’t know what’s happening, but God does. He has a plan.”

The bishop also shared the story of a woman he encountered during his years as a priest in Philadelphia. She was a single mother struggling with substance abuse. He lost touch with her but they reconnected recently and he learned that she earned her high school equivalency certificate, a college degree and eventually a PhD in education. She credited him with helping her to find her way. 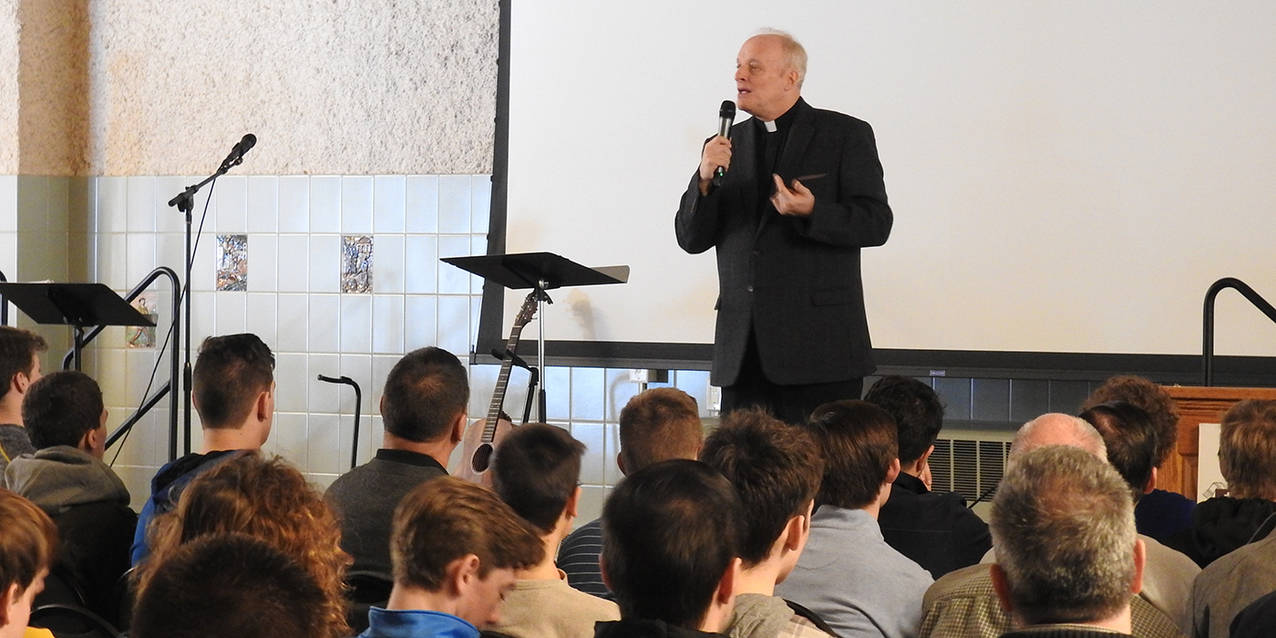 “God writes straight with crooked lines,” he told the group, as he urged them to connect and share with those around them.

Other speakers/presenters included Father Eric Garris, parochial vicar at St. Raphael Parish, who was ordained in 2017; Father Ryan Mann, parochial vicar at St. John Neumann Parish, who was ordained in 2014; Sister Natalia, who has been a tonsured nun with Christ the Bridegroom Monastery, a Byzantine Catholic monastery, for two years; Martin Dybicz, a retired high school theology teacher; Jim Hogan, a theology teacher and author; Jen Ricard, a pastoral associate at Immaculate Heart of Mary Parish in Cuyahoga Falls; and Erin Hogan, a youth minister at Immaculate Heart of Mary Parish.

Breakout sessions focused on science and religion, dating, Theology of the Body, “How to be Catholic in this World” and “Stress and a Sense of Self.” There were sessions for the boys, the dads/mentors and general sessions.

Attendees had an opportunity to go to confession, enjoy open gym time, attend Mass, enjoy a Texas barbecue dinner and play the seminarians in a basketball game.

Pete and Susan Cipriani, two of the event organizers, credited many of the younger diocesan priests and seminarians who volunteered to speak and help at the conference. They said the St. Joseph’s Businessmen Network, AM 1260 The Rock Catholic radio station, Deacon Keith Walcutt, Marriages of Grace and others made key contributions to the conference.

Dick Russ, a board member of AM 1260 The Rock, also has a son who is a Jesuit priest. He helped organize and support the program and said there was a need for something like this.

“We have two teenage sons and we know there is so much culture to fight,” Susan Cipriani said, adding that the conference was envisioned as a way to help the boys and their mentors get the tools they need to follow the right path. “Everyone brought talents to the table and we all worked together to make this happen,” she said. 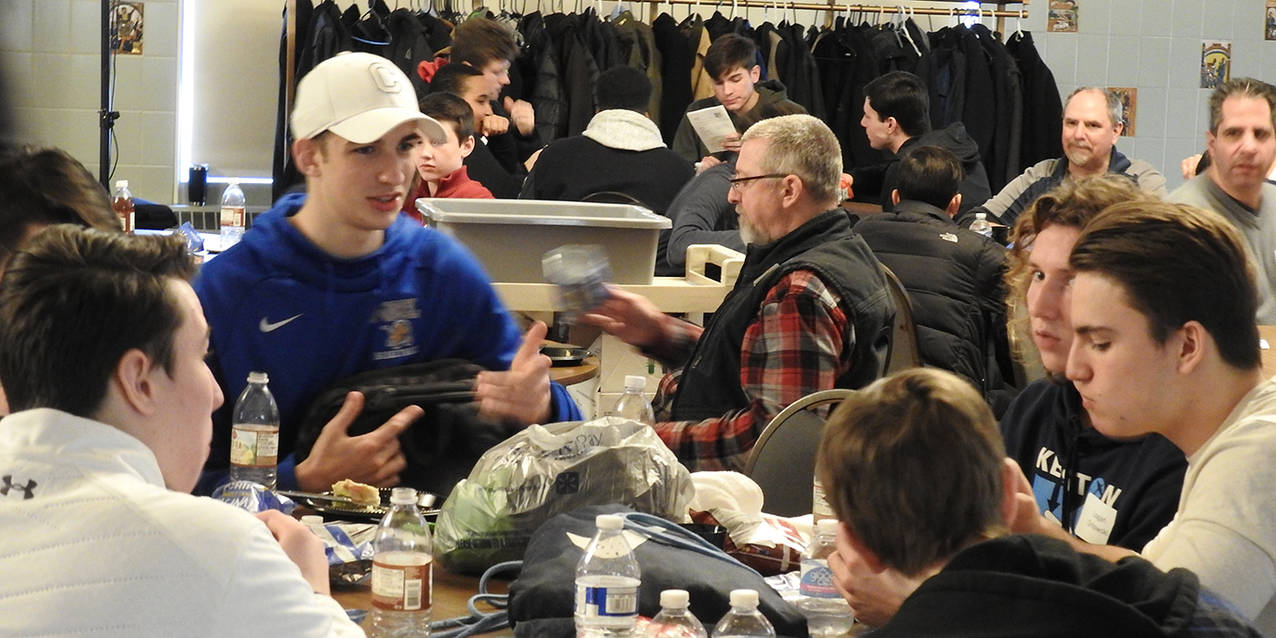 Bill McCarron, who has a son at Borromeo Seminary, was another member of the organizing team. He said there was a lot of positive energy at the conference. “This is the first time something like this has been done here,” he said, adding it was received well.

“We hope to make this an annual event,” Pete Cipriani said.

Visit ycmc.us for more information on the conference.