Life was good for Brooke Taylor – she had a job she enjoyed, friends and loving husband. But there still was a void in her life until she rediscovered her faith. “The world needs to be in love with the Lord and we need to share that,” she said. 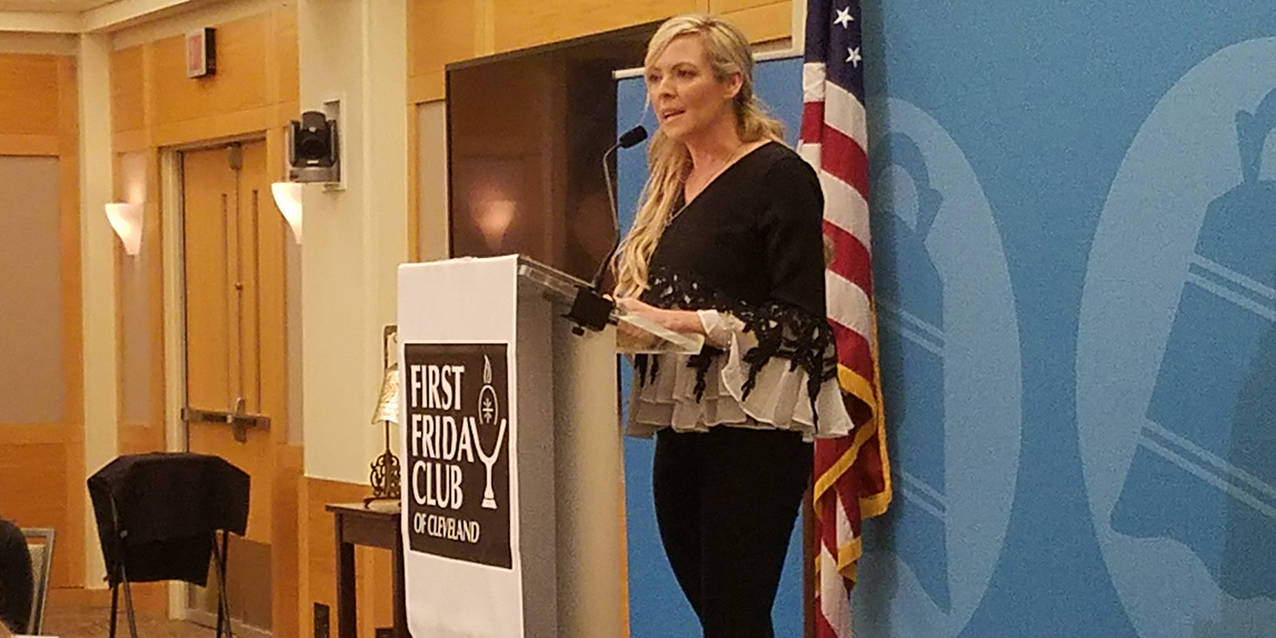 Taylor talked about her “reversion” story with attendees at the Feb. 7 First Friday Club of Cleveland meeting at The City Club in downtown Cleveland.

She recalled being bullied in middle school and feeling insecure. It was difficult for her to find out where she fit. “I thought maybe we could move,” she said. That happened when her father took a job transfer from Ohio to Northeast Wisconsin.

“At 14, I was ‘discovered.’ I got a chance to be on the radio,” Taylor said, explaining how she fell in love with music and the medium. “Radio is in my blood.”

Taylor said she’s shy and it can be hard to let your guard down when you’re facing a room full of people. However, it’s much easier on the radio. “The girl who was bullied became prom queen. But I was empty inside.”

Her mother joined the Sisters of Notre Dame as a young woman and progressed through the stages of aspirant, postulant and novice before leaving due to illness. Taylor said her mother expected to rejoin the congregation, but met her father and her life changed course. However, she remained religious and deeply rooted in her faith.

“I think the faith gene skipped a generation,” Taylor quipped. She recalled both her mother and grandmother being devoted to their faith. “My mother would sing Marian songs to me,” she said, songs that she had sung in the convent.

Taylor was at the top of her game as a morning host on a popular radio show in Wisconsin, but something was missing. She said she still had her faith, but admitted she said some “awful things” on the air, explaining it was the era of “shock jocks.” But she’d go to Mass and was a lector at her parish despite what she did and said on the radio.

Her emptiness continued, so she thought maybe she needed a man in her life. Soon after, she met her husband, an Army veteran. The couple have been married nearly 19 years and they have five children. 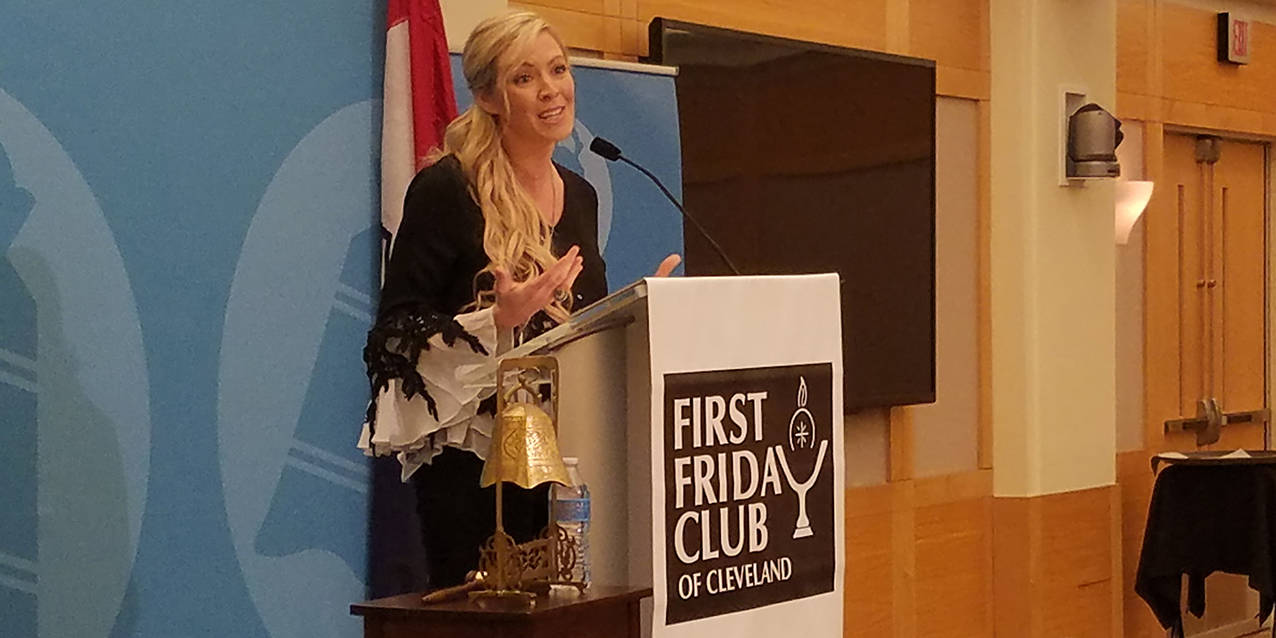 She’s Catholic and he’s Southern Baptist. He attended Mass with her and questioned things like why they knelt so much. “I received all my sacraments but I didn’t really understand my faith. I couldn’t answer his questions,” she said. “I wasn’t tethered in my faith.”

Despite her personal and professional successes, “in my interior life there was poverty,” Taylor said. About this time she was offered the chance to become the morning show host at The Fish, a popular Christian radio station in Cleveland. She spent the next decade on the air at 95.5 FM, where she said listeners would call and ask questions or make requests. It was a Christ-like challenge, she said, and led to what she calls “the great Pentecost in my life.”

During her hour-long commute in the early morning, Taylor said she listed to Catholic radio and prayed.

“My prayer changed everything. The sky was bluer and the grass was greener; everything made sense,” Taylor said. “My car became a mobile chapel where I offered my prayers. She said she realized she needed to make reparation for some of the things she had said earlier in her career and that involved confession.

“Everything takes work, even your faith life,” Taylor said. She said she used to believe that her mother and grandmother were born into their faith lives, “but now I realize my mom works at it daily.”

Since her faith has been renewed, Taylor said she realizes we are never alone or lost in a crowd – God is always with us. She said that spark makes her “want to be on fire” with her faith and to share it.

“There is no better thing that giving the gift of our faith. That gift is one thing that will never fail us, she said. “Our kids need to see how God see us. There is nothing we can’t do once we see that. When you’re ready and you tell God that you’re all in, he’s ready.”

After 10 years at The Fish, Taylor said she left because her family needed her at home. One of her daughters, who was adopted from Poland, is severely autistic. She quipped that she went from a huge radio audience listening each morning “to five kids who never listen to me.” 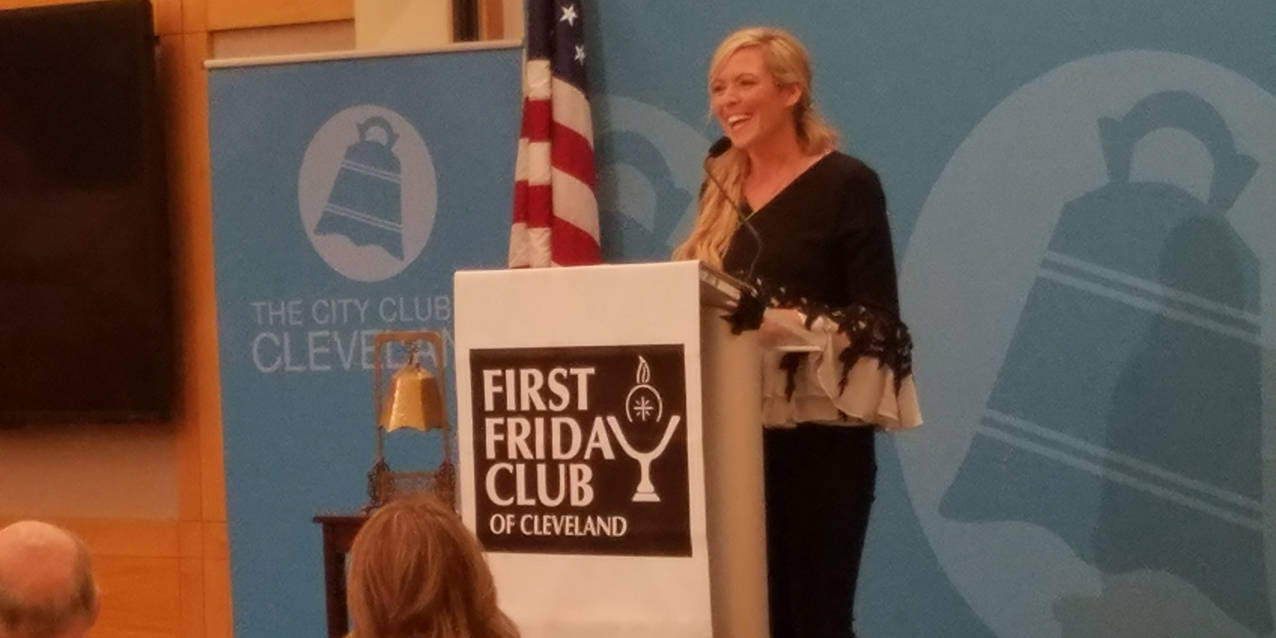 Taylor produces “The Sacred Sink” blog. “The sink is my home altar. It’s where I pray,” she said.

Taylor said she’s had many opportunities to share her faith, including working with Father Bob Stec on The FEST each summer, as well as on the radio, through public speaking engagements and more. She also leads pilgrimages.

She recalls visiting Haiti where she met a woman who had lost everything after a disaster. The organization sponsoring the visit helped build a new home for the woman. It was very simple, Taylor said, but the woman was thrilled. We need to be more like that woman Taylor said, “filled with wonder, joy and zeal and to thank God for everything we have.”

In closing, she offered a “Catholic rap,” which was more like a poem. “We need to be Catholic rap stars,” she said.

The next speaker will be Michael Johnson, president of John Carroll University, who will speak at the lunchtime meeting on Feb. 28 at The City Club. For more information or reservations, visit firstfridayclubcleveland.org or call 216-589-9852.