There are some simple -- but important -- words that must be used in order to have a happy marriage: please, thank you and sorry, Bishop Nelson Perez told a gathering of Regnum Christi members. His talk included a discussion of love, marriage and the role of the sacrament in the Church. 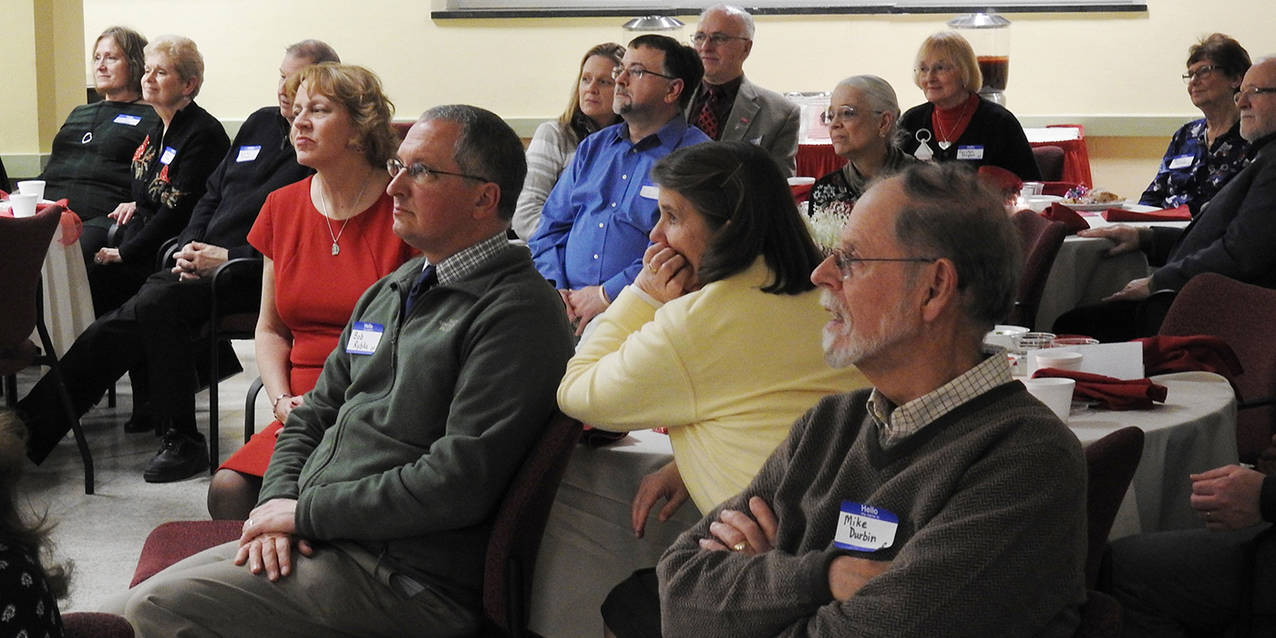 The movement has a Christ-centered spirituality that is lived together in communion with the members of all four vocations in union with the whole Church, and through a mission to build the kingdom of Christ.

There are about 30,000 Regnum Christi members in 38 countries worldwide. In the United States, the movement is active in 27 states and the District of Columbia. Rich Amiot, assistant to the local director for Northeast Ohio, coordinated the Feb. 13 event.

“No hay rosa sin espina,” Bishop Perez told the group, asking if anyone understood the meaning of the Spanish idiom. “There is no rose without a thorn,” he said.

Using the phrase, the bishop explained that love and marriage are like that – they can be warm and fuzzy when all is going well, but couples also will face thorny, difficult and painful times because that’s human nature.

During his years as a parochial vicar and pastor, the bishop said he helped many couples prepare for marriage and celebrated hundreds -- if not thousands -- of weddings over the years. As a bishop, he doesn’t celebrate too many weddings but he did witness one recently. He has known the bride all her life.

“She Facetimed me after finishing Pre-Cana and I asked her what she had learned, what was the takeaway. She told me, ‘I learned I am Nick’s way to heaven.’ Wow. No other bride or groom has ever told me that,” he said, adding it is true. 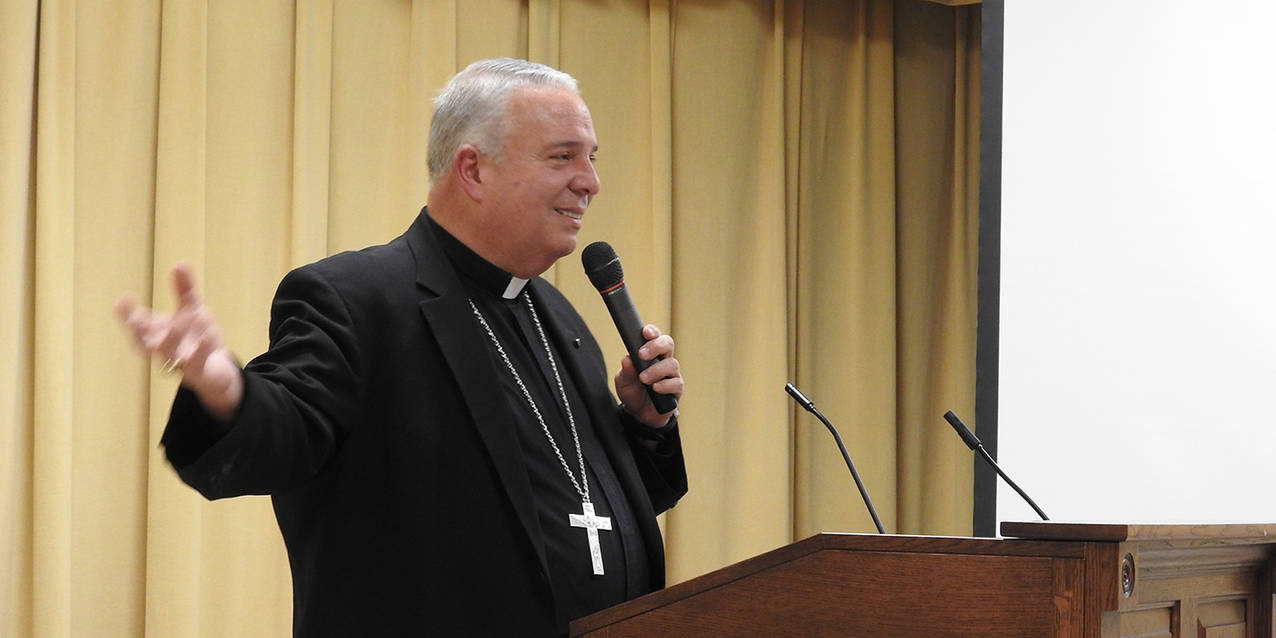 He quoted Pope Francis who said that marriage is not a social convention or an empty ritual, it’s an outward sign of the sanctification of spouses which is the same relationship that exists between Christ and the Church.

Bishop Perez discussed the difference between symbols and signs, explaining that a symbol – like a ring – can have multiple meanings. As a bishop, he has a ring that symbolizes his spousal relationship with the Church and the diocese. When he was elevated to bishop, he had to create a coat of arms that showed who he was with symbols of his family and the Church. When he was appointed bishop of Cleveland, his coat of arms was “wedded” to the diocesan coat of arms. “You can’t see one without the other,” he added.

However, a sign usually has only one meaning he said, using the example of a stop sign.

“Marriage points to only one thing. The married couple becomes a sign of Christ’s relationship with his Church -- a symbol of how he loves the world. And that’s an awesome responsibility,” he said.

Using the illustration of a priest celebrating Mass, Bishop Perez said that for most of the Mass the priest prays in the Church’s place, except when he confects the Eucharist. “Then he is in first person, as Christ,” he said.

Most of what we do as Catholics is tradition, the bishop said. Engaged couples who want to be married in the Church are not just interested in tradition or in a ritual that unites a man and a woman. “There is something that they feel or need or they wouldn’t be there. And we have a great gift to offer them – a gift they yearn for.” Marriage also includes accountability – a commitment to each other. In addition, the bishop said Scripture tells us to “be fruitful and multiply,” which is one of the responsibilities of marriage – to take the union to a higher level. Marriage includes a mutual self-giving that incorporates sexuality according to God’s plan, he explained, which can mean the gift of children. 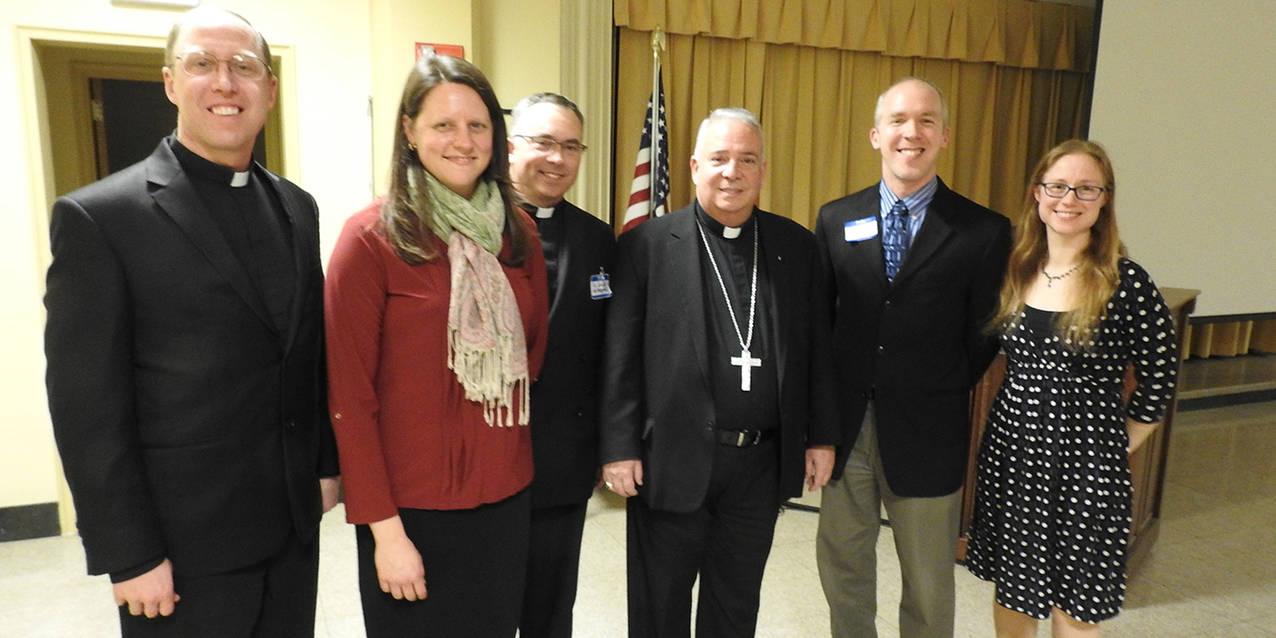 As a priest, he is in a spousal relationship with the Church and the Church is the bride of Christ. The bishop told the married couples that the next time they have a disagreement they should think about Christ who has had the same spouse – the Church -- for more than 2,000 years. “We humans can be pieces of work but the Church is holy because Christ is holy. Jesus became man – with all our imperfections – and incardinated divine love,” he said.

Reflecting on Pope Francis’ “Amoris Laetitia,” he said marriage is defined as a community of life and love, with love placed at the center of the family. Spouses are consecrated with a special grace and build up the body of Christ – the domestic Church, he said, adding that the Church looks at a Christian family to see who they are.

“You are a community of love and life. That’s why you must be life-giving. Love desires good for the other,” Bishop Perez said. He asked those in attendance to close their eyes and think about what the love for their spouse looks like as he read from St. Paul’s letter to the Corinthians describing love as patient, kind and enduring.

He shared a story about a young married couple who came to talk to him about problems they were having. Even though they bickered, he said each still loved the other and was willing to give his or her life for the other.

“Love must be freely and generously expressed in words and actions,” he said.

For more information on the Regnum Christi movement, visit regnumchristi.org.