Catholic students learn about Holocaust at Face to Face program

About 90 eighth-graders from three Catholic elementary schools: All Saints of St. John Vianney, in Wickliffe and St. Adalbert and St. Aloysius, both in Cleveland, spent the morning of Feb. 26 learning about the Holocaust.

The three-hour Face to Face Holocaust Education Program, part of Kol Israel’s Holocaust education program, was presented at Congregation Shaarey Tikvah in Beachwood. Kol Israel Foundation is a nonprofit that was established in 1959 by a group of Holocaust survivors who settled in Cleveland. Its mission is to educate people about the Holocaust and to help people learn to identify the dangers of intolerance and bigotry. Hallie Duchan is executive director. 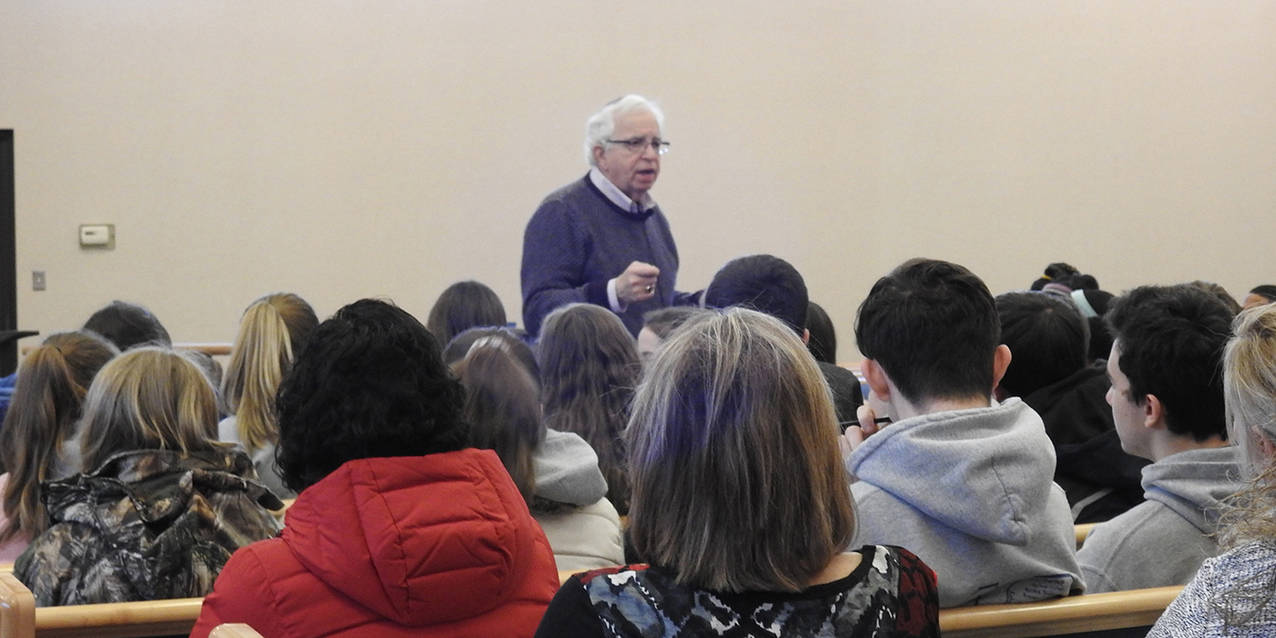 All Saints social studies teacher Sharon Pusateri said the field trip was sponsored by All Saints with support from Face to Face. All Saints sponsors a field trip with the other two schools each year, generally during Black History Month, which is observed in February. She said after learning about Face to Face, it seemed like something worth pursuing.

The students arrived by bus, van and car on a snowy Tuesday morning. They entered the Shaarey Tikvah sanctuary and were greeted by Face to Face volunteers and Louise Freilich, Face to Face director.

Rabbi Daniel Roberts, emeritus rabbi of Temple Emanu El, gave the students an overview of the Jewish faith. He showed one of Congregation Shaarey Tikvah’s sacred Torahs, a scroll that contains the five books of Moses plus writings of the prophets, psalms and more. The Torah is written in Hebrew by a sofer, someone dedicated to the sacred work, on parchment using a special ink in a process that takes a year to complete. Portions of the Torah are read at services throughout the year.

Several items related to the Jewish faith were displayed on a table in front of the sanctuary. Rabbi Roberts also showed – and demonstrated -- a shofar, a ram’s horn, that is blown during certain services. The students also saw a Tzedakah Box, which is used to collect money for charity. Rabbi Roberts explained that Jews believe they have an obligation to give to charity and to do good works in order to be righteous.

“It is us and God working together, sharing to help make things better for someone else,” he said. 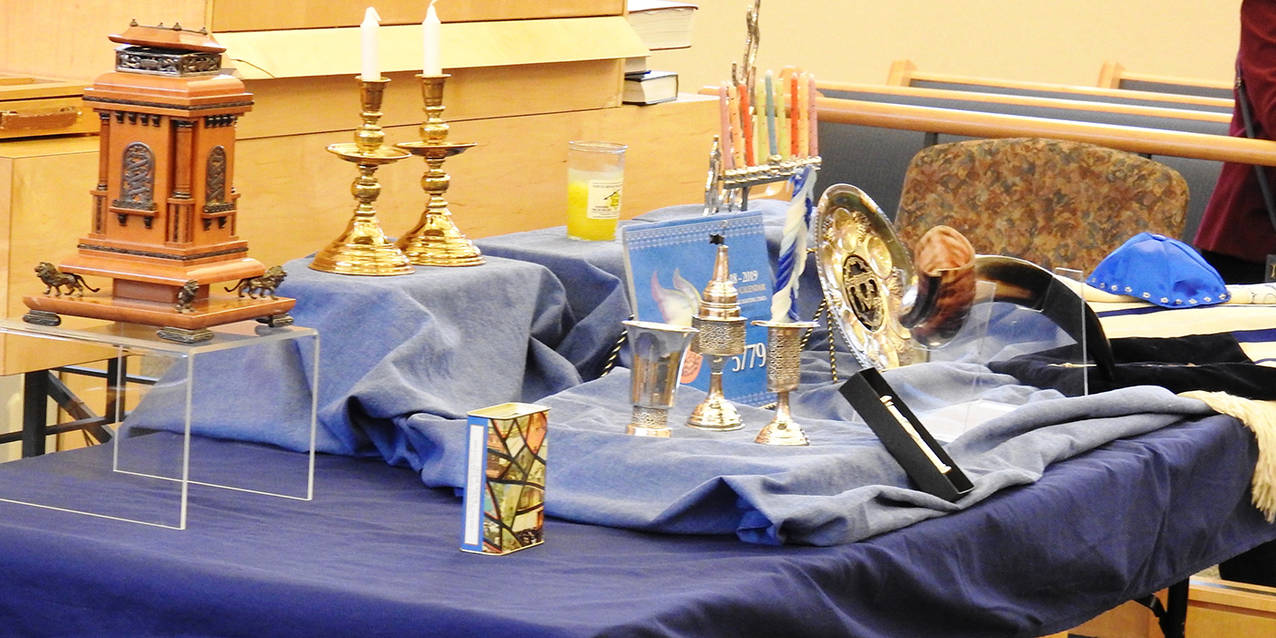 Freilich said Rabbi Roberts is one of a team of Jewish educators who volunteer their time with Face to Face to share an overview of the faith.

After the rabbi’s presentation, Freilich set the stage for the Holocaust, explaining conditions in Germany during the early 1930s, when Adolph Hitler came to power. He became chancellor of Germany in 1933 and fuhrer the following year. His dictatorship lasted until 1945, near the end of World War II.

Freilich told the group that an estimated 6 million Jews were killed during the Holocaust, including 1.5 million children. In addition to the Jews, Polish Catholics, gypsies, blacks, prisoners of war, Jehovah’s witnesses, political dissidents, members of the resistance and male homosexuals also were targeted.

“It was a genocide,” Freilich explained. Holocaust survivors include anyone who was alive during that era and survived the war, she said.

She discussed how the Nazis used propaganda to spread and reinforce their message that the Jews were a threat to German society. There was discontent among the lower and middle classes in Germany after World War I, with many people suffering during the Great Depression. The Nazis used the opportunity to feed on the discontent and to spread their beliefs. 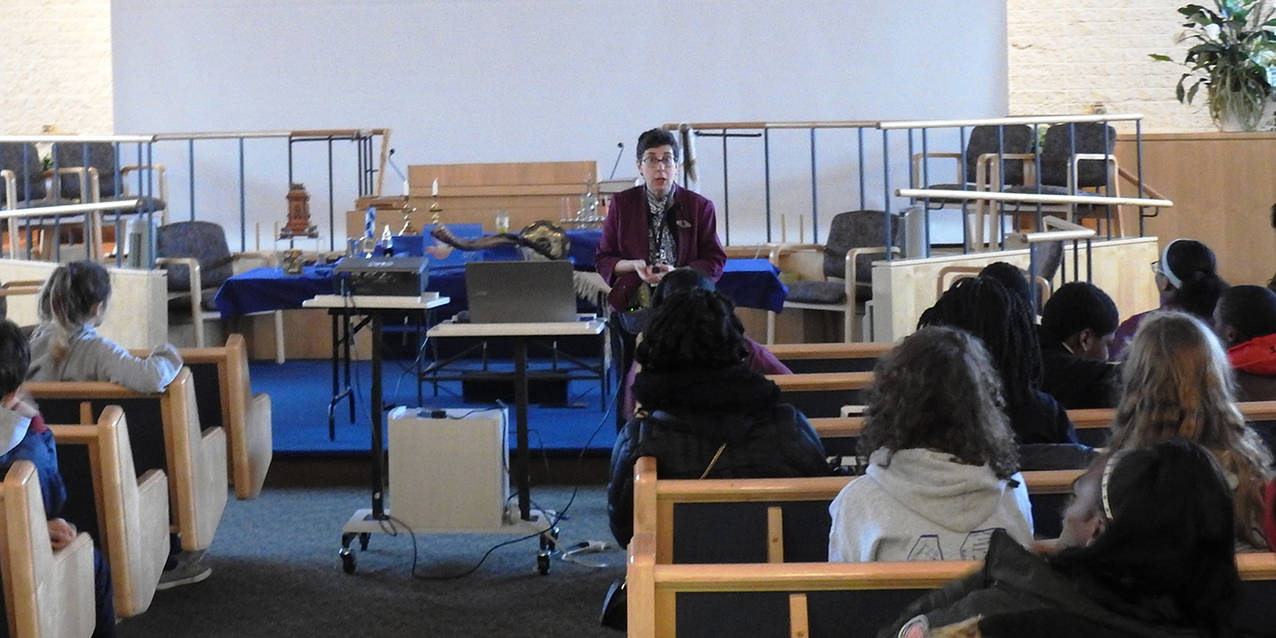 Jews were identified and the Nazis systematically began seizing their property, imposing more than 400 strict laws including curfews, refusing to allow Jewish children to attend school and forcing the Jews into ghettos.

Freilich used slides and a series of questions to help students understand anti-Semitism and how it grew during that time in Germany. On Sept. 1, 1939, Germany invaded Poland, which is regarded as the beginning of World War II.

Two months later -- on Nov. 9, 1939 -- the Nazis coordinated a night of anti-Semitic terror known as Kristallnacht or the Night of Broken Glass. Synagogues were set on fire, 30,000 Jewish men were arrested and sent to concentration camps, Jewish businesses were looted, homes were vandalized, Jews were beaten and abused and more than 200 Jews were killed. It was the beginning of the Holocaust.

The students were asked what they would think about their churches being burned and what actions they might take the next day and how that compared to what the Jews could do in 1938.

They learned that after Kristallnacht, the United Kingdom agreed to take in 10,000 predominantly Jewish children in a program called Kindertransport. The youngsters, ages 2-17, were sent by their parents to be placed in British foster homes, hostels, schools and farms. They came from Nazi Germany, Austria, Czechoslovakia, Poland and the Free City of Danzig. Often these children were the only members of their family to survive the Holocaust. 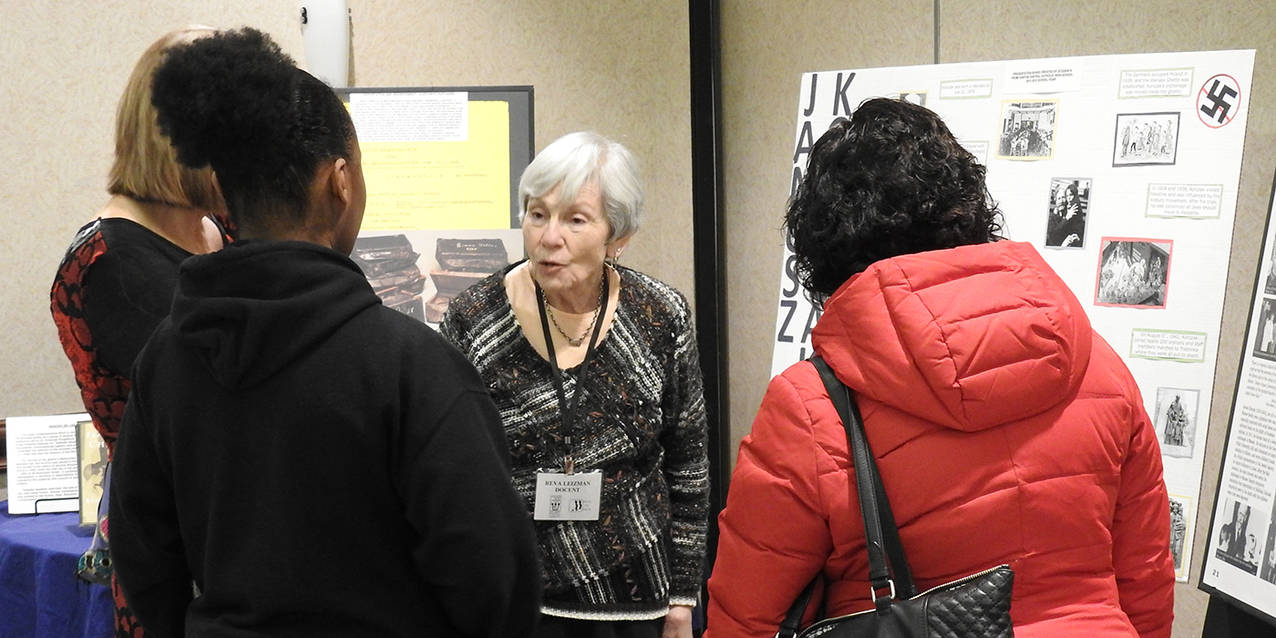 The students saw pictures of Jews being forced onto trains that would take them to camps where many were killed immediately and others were forced to work as slaves. Conditions in the camps were brutal.

“But each of these people had lives. They had families; they were loved, they had businesses, homes and possessions,” Freilich said, adding that many were scholars, accomplished artists, musicians and writers, doctors, engineers, teachers, bankers, business owners and well-regarded members of society until the Nazis came to power.

She also talked about how some people helped rescue Jews during the war by hiding them and helping them to escape. Many of these people have been dubbed “righteous” for aiding Jews during the Holocaust.

When the war in Europe ended in spring 1945, Allies liberated the camps and were horrified at what they saw. After the war ended in Europe, there were an estimated 10 million displaced persons, known as “DPs,” who needed help to re-establish their lives. Most of these survivors had no place to go because their homes were destroyed or taken over, they were unwelcome because of lingering hostility, food, clothing and medical supplies were scarce and many were suffering from grief and other problems. Many landed in DP camps. They gradually rebuilt their lives -- marrying, starting families, learning new languages, moving to new countries like Israel, England, the United States and to places in South America and Australia.

The students were able to see and learn more about various aspects of the Holocaust during a visit to a small museum curated by Face to Face at Shaarey Tikvah. Numerous photos, artifacts and displays helped portray life in the ghetto, the camps and how the Jews persevered through the Holocaust. There also was a Kindertransport display, as well as Holocaust resources. 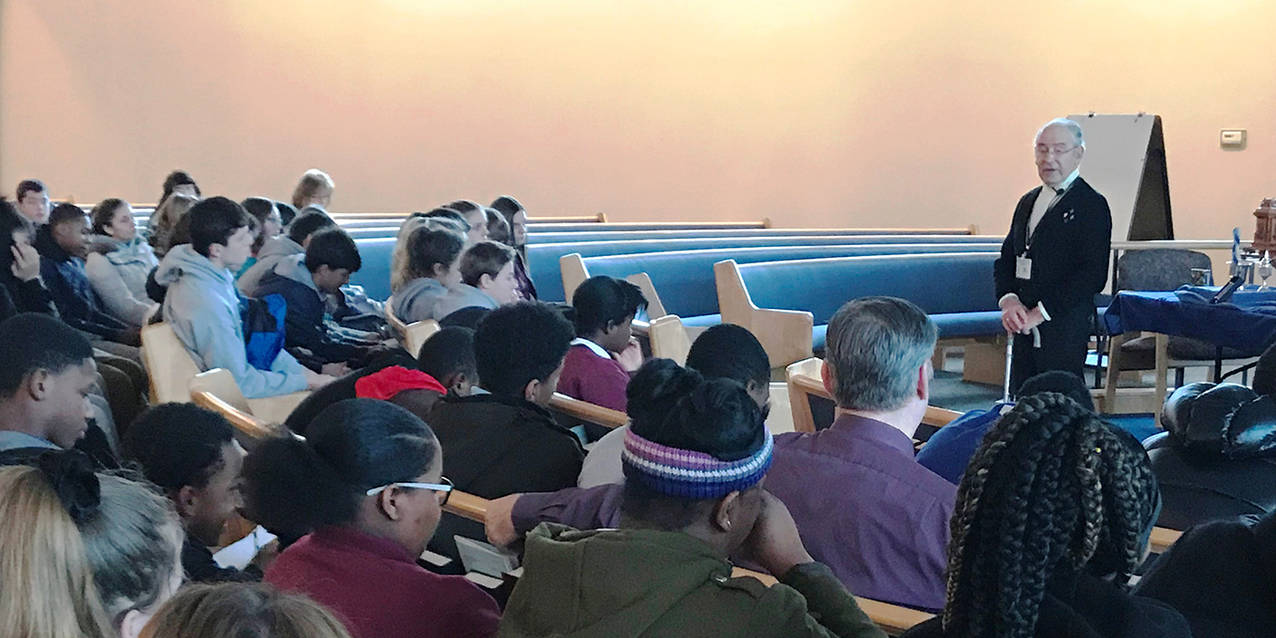 George Kronenberg, a Holocaust survivor who was part of the Kindertransport, shared his story. Kronenberg said he and his twin sister were 10 when the war began. Their father was arrested on Kristallnacht but was released. However, their apartment was destroyed. Their parents were concerned for the twins’ safety and when they learned about the Kindertransport, they arranged to get them on the second trip. They went to England and were separated for six years – George living in a hostel, attending school and getting a job. His sister was sent to live with a farm family where she worked as a domestic.

“I had it better than she did,” he said. For a time, the siblings had limited communication with their parents, who had been sent to a camp. Later they learned that their parents, other friends and relatives died in the camp.

After the war, the twins lived briefly in Israel before being invited by an aunt and uncle to come to the U.S., where they began new lives. He talked about how emotional it was to attend the 50th Kindertransport reunion in 1989. Kronenberg also said he and his wife returned to Germany for a visit several years ago so he could show her where he was born. Although initially reticent, he said he was glad he had the opportunity to return. 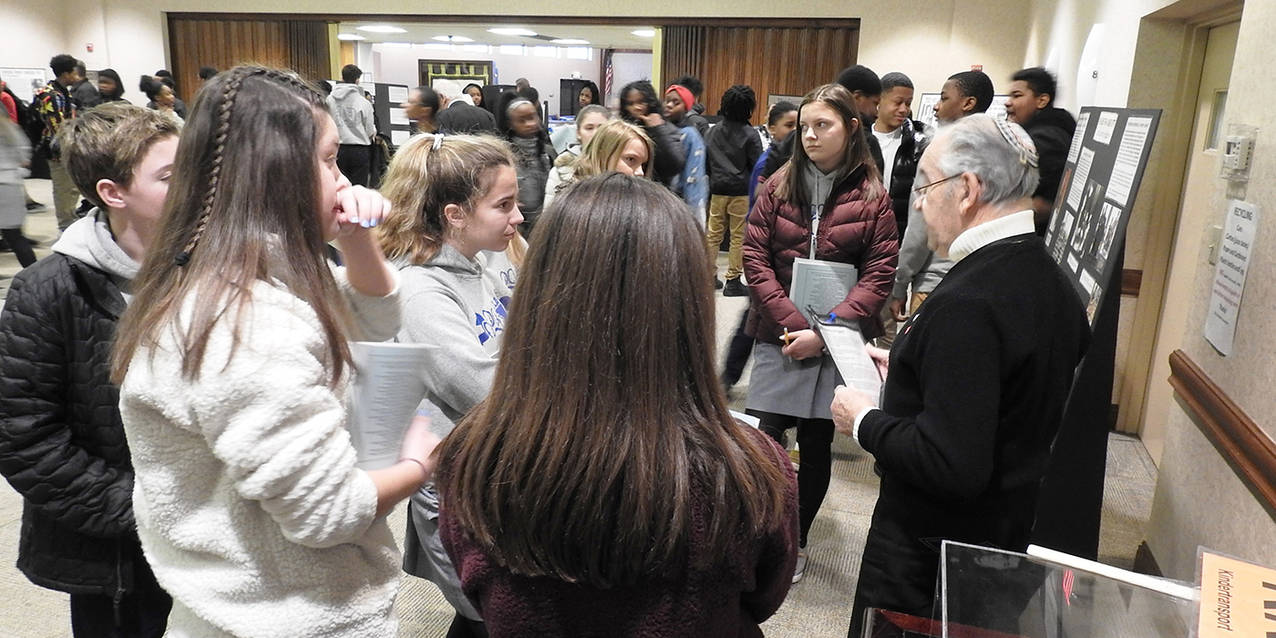 “No one is born with hate,” Kronenberg said. “That comes later.”

In parting, Freilich told the group that anti-Semitism remains a problem today and it is growing.

“Its’s up to you young people to speak out against it,” she said.

For more information on Kol Israel Foundation and is Holocaust education program, visit kifcle.org or call 216-831-3754. The group will host a Holocaust Remembrance Day program with the Jewish Federation of Cleveland at 7 p.m. May 1 at B’nai Jeshurun Congregation, 27501 Fairmount Blvd., Pepper Pike.