Michael Johnson, who became the 25th president of John Carroll University last June, shared the story of his journey from a small North Dakota town to the head of the Jesuit university in Cleveland with attendees at the Feb. 28 meeting of the First Friday Club of Cleveland (view video at the bottom of this story).

He credits his parents for leading by example and teaching him about diversity and the value of service, as well as others in the academic and professional worlds with whom he crossed paths. 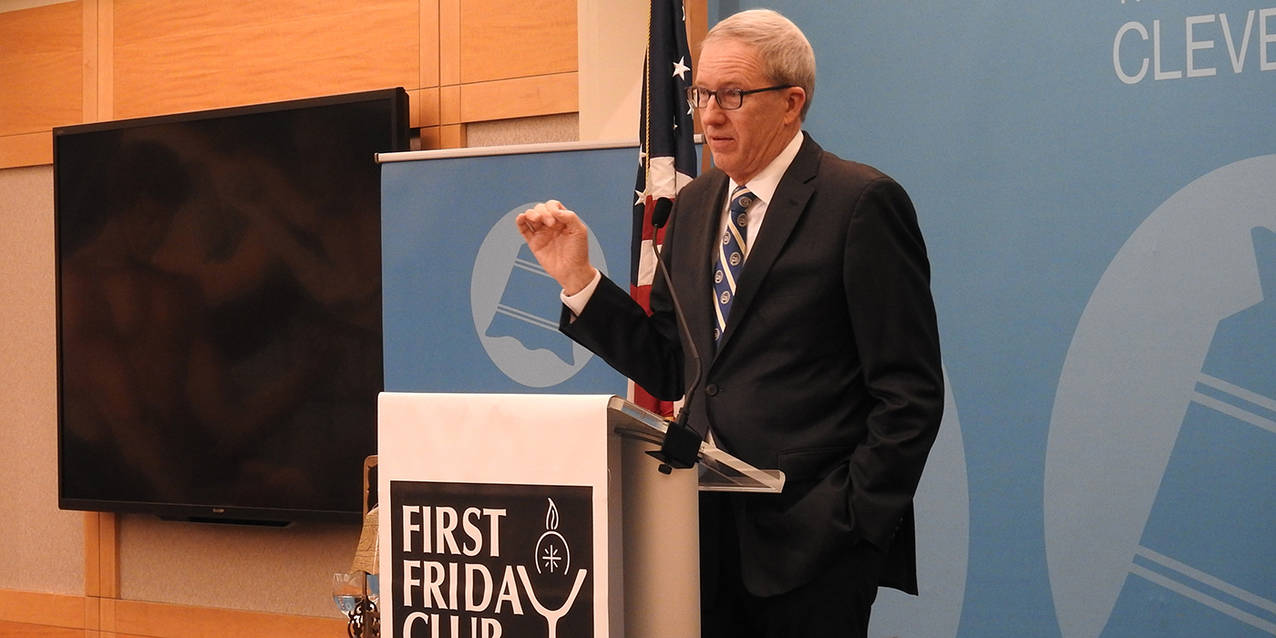 Johnson is the first lay person to lead the Jesuit university – one of 28 in the country -- since its founding in 1886.

Ed Peck, JCU vice president of mission and identity, introduced Johnson. He said Johnson brought “inspired leadership” to the campus, where he “leads by example, not by authority or power.” Peck said in the business world, management might call Johnson’s philosophy the creation of high-performance teams.

Johnson said he’s lived in North Dakota; Madison, Wisconsin, were he grew up; Chicago, where he attended college; Ann Arbor, Michigan and Ithaca, New York, where he taught and worked in the academic world, before moving to “the tropical Lake Erie shores,” quipping that “Cleveland is the southernmost place we’ve lived.”

Prior to accepting the JCU presidency, Johnson served as provost at Babson College where he also was professor of marketing. He was appointed in 2016 and was senior academic officer at the college, leading all academic affairs -- including oversight of the undergraduate school, the F.W. Olin Graduate School of Business and the Babson Executive and Enterprise Education division. 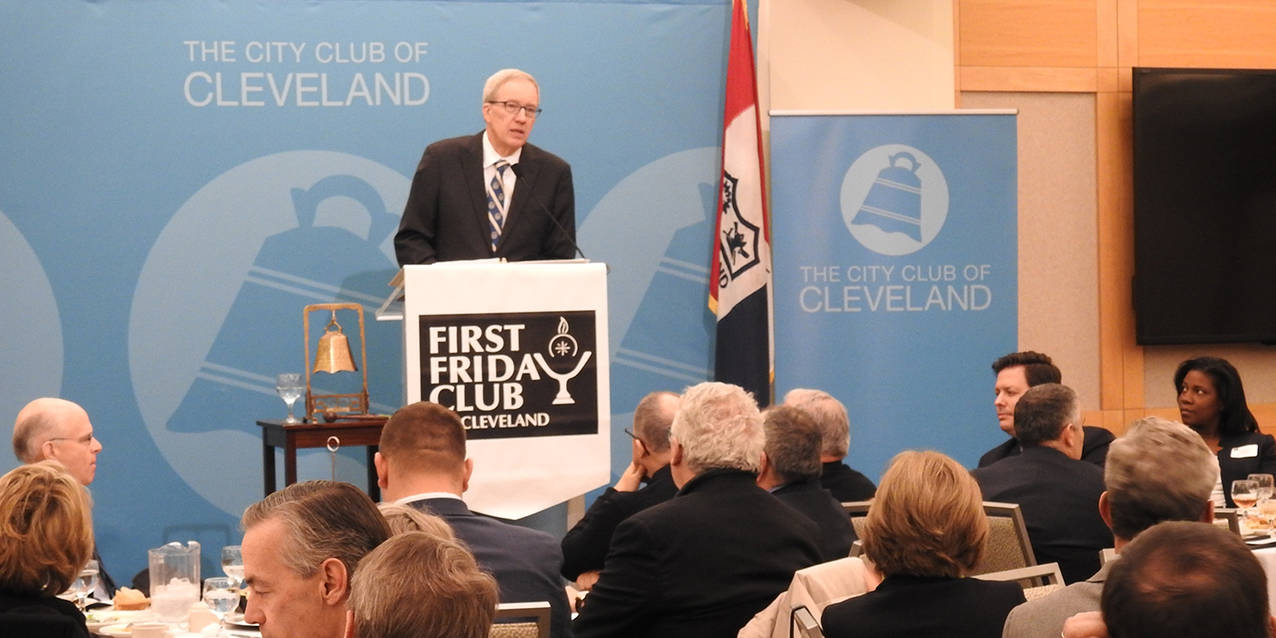 For a decade before that, he was dean, E.M. Statler Professor and a professor of marketing at Cornell University’s School of Hotel Administration. His role as dean included investing in faculty, expanding students’ learning and career opportunities, increasing diversity, building an effective fundraising organization and growing the school’s global platform.

In addition, John spent 24 years at the University of Michigan where he was the D. Maynard Phelps Collegiate Professor of Business Administration and professor of marketing at the Stephen M. Ross School of Business. He published more than 100 academic articles and books and taught undergraduate and executive programs. Johnson also was a consultant for many companies and public agencies.

He said he was born in Bottineau, North Dakota – about 10 miles from the Canadian border – where his father was a doctor. Although his parents died while he was in graduate school, Johnson said he watched them and learned valuable lessons.

He also credits his wife, Jill, an attorney, for instilling the importance of the family to him and their three sons. “We love all people,” Johnson said.

He said it’s important to always place students and the university first, something he has learned from multiple sources. “The key people – influencers – lead by example and have a clear mission, vision for their team,” Johnson said.

The mission of St. Ignatius of Loyola was to save souls – a clear mission, Johnson said, adding that the techniques he used still are relevant today.

“At John Carroll University, we draw inspiration from St. Ignatius Loyola and his Spiritual Exercises to form leaders who are characterized by self-awareness and reflection, effective decision-making, inclusiveness, a commitment to the greater good and a deep care and respect for others,” Johnson said.

During the development stage, investment is important as students focus on themselves to prepare for their careers. As they grow, they learn leadership during which their life purpose turns to focusing more on the success of others, which is followed by service in which their lives are more about being of service to others.

“John Carroll is a place where we prepare men and women for service to others,” Johnson said.

He said it is important to take time to understand, learn, reflect and lead. “Thinking forward and working backward is the key to life,” Johnson said, a lesson he learned from a friend who was a professor and dean.

“It’s not about us – it’s about the position we hold. Our job is to leave the institution better than we found it,” he added.

And that means finding ways to help others. Johnson said the Labre ministry at JCU and St. Ignatius High School, the Jesuit high school in Cleveland, is one example of service to others.

“I watched students go to feed the homeless – people they know,” he said, describing the ministry in which student-led groups travel to places where the homeless live, bringing them food, clothing, other necessities and companionship. Those in the Labre ministry meet the homeless where they are and develop a relationship with them, he said.

Empowerment is a major plank in Johnson’s leadership style.

“When decisions are made without input from the stakeholders – those affected by the decisions – there is little chance for success,” he said, adding it is important to practice leadership in all we do. “Don’t rush to judgments and decisions. But once a decision is made, implement it and move on.”

Johnson reminded the group that leaders are temporary managers.

“In inspired leadership success is measured by the success of others,” he said. “The greatest rewards are the people you meet – those affected and those who led us, walked with us and those who are helped.”

Bob DiBiasio, longtime senior vice president – public affairs for the Cleveland Indians, will speak at the next First Friday program at noon April 4 at The City Club, 850 Euclid Ave., Cleveland. Cost of the lunch program is $25 or $250 for a table of 10.