With the start of the Major League Baseball season this week, it was fitting that the First Friday Club of Cleveland welcomed Bob DiBiasio, Cleveland Indians senior vice president of public affairs, at its April 4 meeting at The City Club in downtown Cleveland.

DiBiasio has spent 41 seasons in Major League Baseball -- 40 of them with the Cleveland Indians. “Baseball is one of the oldest institutions in the city of Cleveland. It is in the fabric of who we are,” he said. 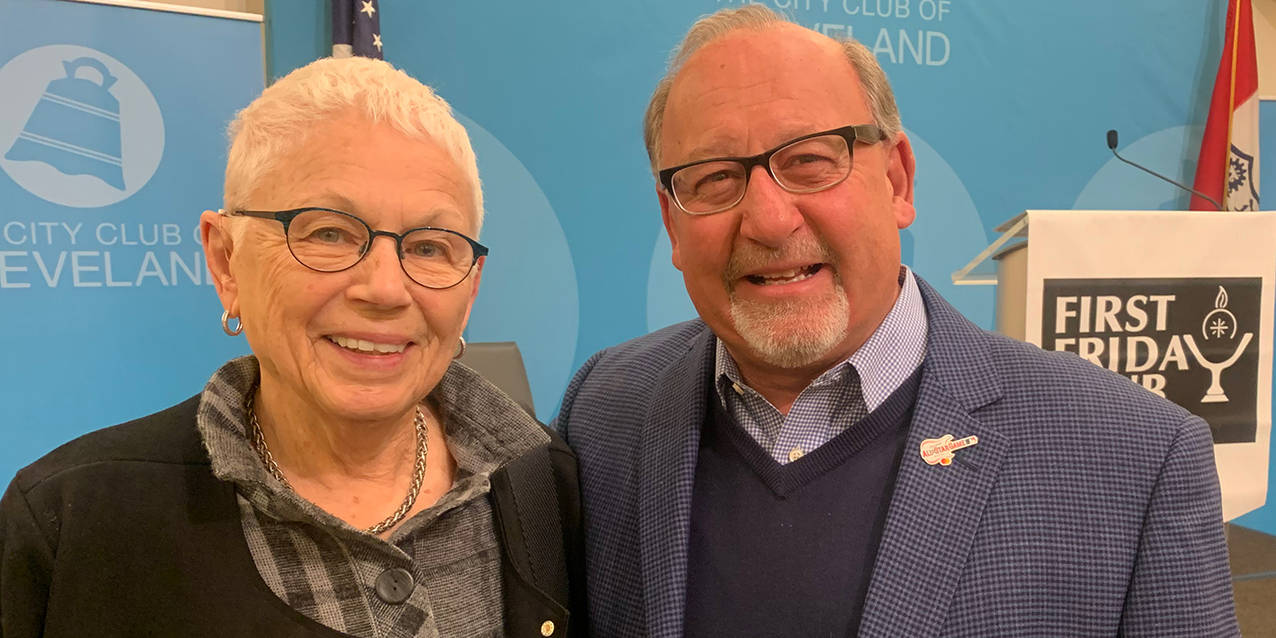 As he talked all things Tribe, DiBiasio gave the room a lesson on baseball by the numbers. He dug into the unique stats of the Indians offseason and the latest hot topic: revenue vs. payroll.

“Last year there were more strikeouts than hits for the first time ever in baseball,” DiBiasio said. “This has our analytics guys reviewing every piece of data on launch angle.”

With a complexity of data available, major league hitters are focusing on getting the ball in the air. Launch angle represents the vertical angle at which the ball leaves a player’s bat after being hit, he said. Batters can be evaluated by their average launch angle which becomes valued information for pitchers. 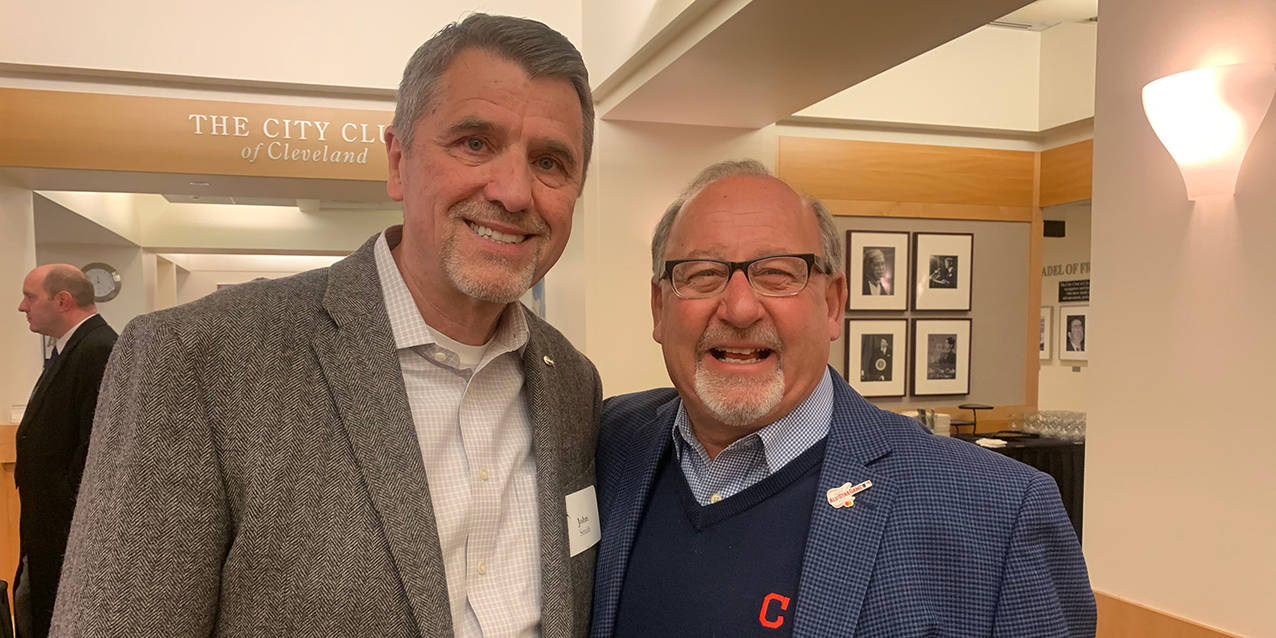 That led to a transition on the overall commitment from ownership, staff and baseball operations in providing the best resources possible for players.

“There are 21 different countries represented in athletes that play Major League Baseball,” DiBiasio said. “We have just completed a training facility in the Dominican Republic to support all athletes from Venezuela, Puerto Rico and the entire Caribbean region.”

The Cleveland Indians are committed to developing and maintaining an environment that embraces diversity. From enriching the franchise’s core values to enhancing the competitive position, the team’s diversity initiative fosters an appreciation for the local and global community to which the Indians conduct operations, he said. 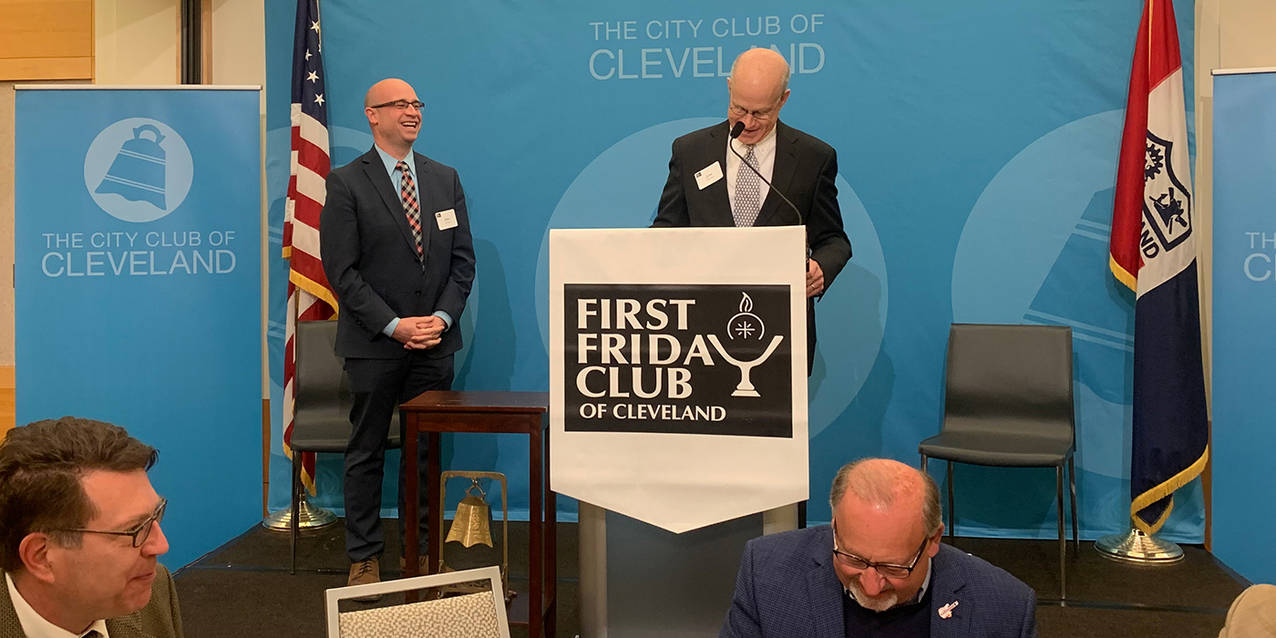 Before closing, DiBiasio answered questions about the team and individual players. He wrapped up by highlighting the 2019 Major League Baseball All-Star game on July 9 that will be hosted at Progressive Field. 2019 is the 90th anniversary of the All-Star game.

John Diemer, First Friday Club president, acknowledged that in observance of Lent, no desserts would be served at the luncheon. Diemer explained that the typical catering expenditure would be used in an act of almsgiving. Diemer then presented a $250 check from the club to John Litten, Westside Catholic Center executive director.

Bishop Roger Gries gave the final blessing highlighting that the season of Lent allows for everyone to feel enlightened and striving to reach all goals both spiritually and professionally.

The next speaker will be Alex Schadenberg from the Euthanasia Prevention Coalition, who will speak on the topic “Caring Not Killing,” at the meeting on May 2 at The City Club. For more information or reservations, visit firstfridayclubcleveland.org or call 216-589-9852.