Chilly, drizzly weather did little to dampen the enthusiasm of the crowd gathered to celebrate the dedication of the new St. John the Baptist Recovery Outreach Center on April 5 in Akron. 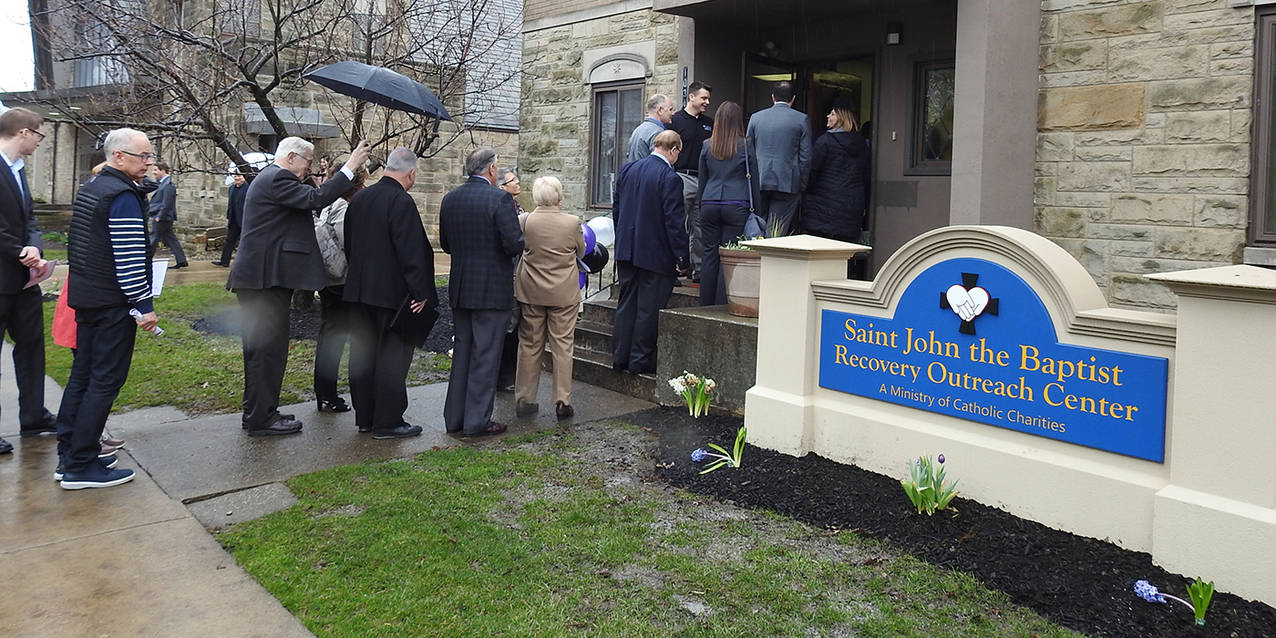 Father Jonathon Zingales, pastor of St. John’s and nearby Visitation of Mary parishes, said the St. John’s community had been discussing what kind of legacy the parish, which was founded in 1907, wanted to leave for the community.

“We had been talking about what kind of footprint we could leave on Brown Street,” he said. The outreach center is at 1034 Brown Street in Akron. The old rectory had been empty since about 2006, he said. The parish was among those closed during a reconfiguration of the diocese in 2009-2010, but it appealed successfully and was among about a dozen parishes that reopened in 2012. However, the rectory remained empty and was boarded up.

Patrick Gareau, CEO and president, Catholic Charities, Diocese of Cleveland, offered his thanks to Father Zingales, noting that he and the parish were cooperative in providing affordable space and support for the project. 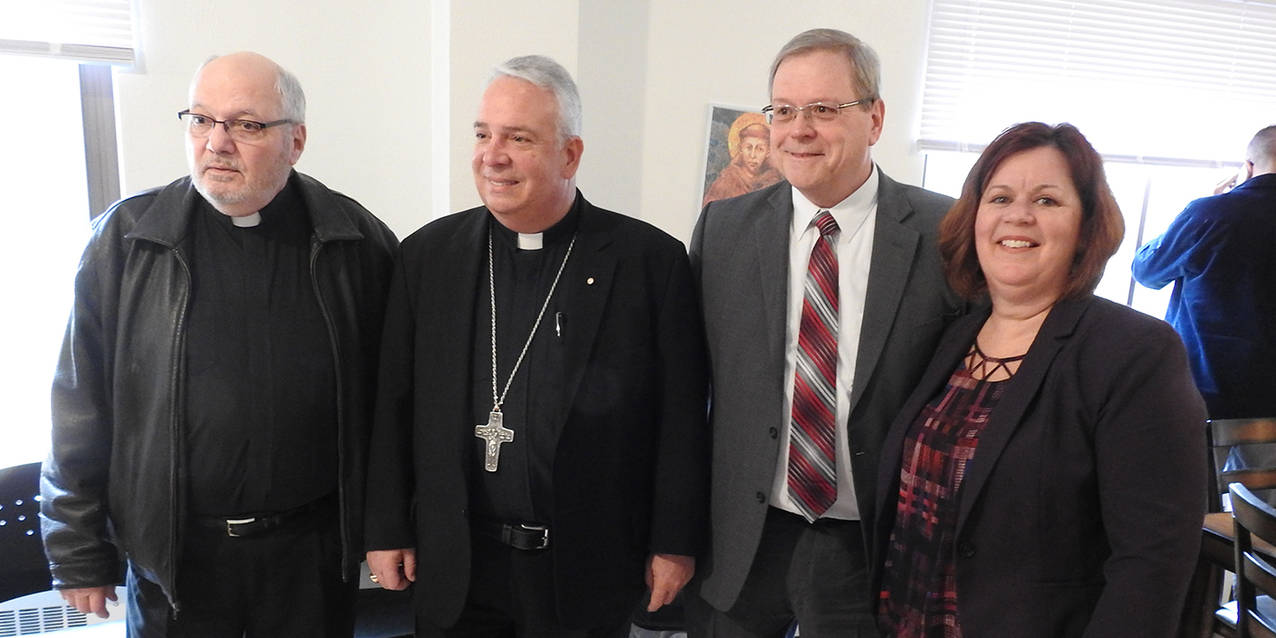 “The need is there and Catholic Charities always responds to the need of an emerging community,” Gareau said. The second in-pew appeal of the 2018 Catholic Charities’ Annual Appeal was earmarked for expanding substance abuse programs throughout the diocese, Gareau said, including the new center in Akron.

“Nearly $700,000 was raised in that appeal last May,” Gareau said. “We are fortunate to have such faithful donors.”

Catherine Thier, director of Summit County Catholic Charities, Diocese of Cleveland, said there is a great need for an outreach center in Summit County. A large number of people reported they had participated in binge drinking in the past 30 days, she said. She also credited Father Zingales with allowing Catholic Charities to redevelop the old rectory. 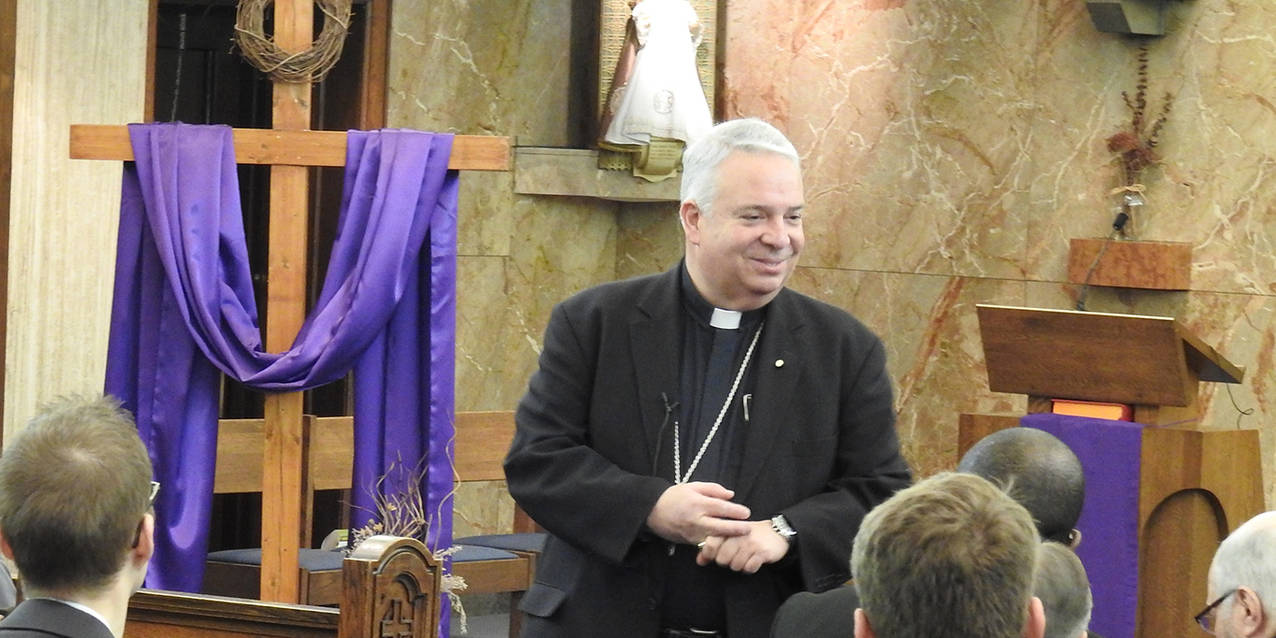 “The seed was planted, that plant grew and we’ve been tending it ever since,” she said of the project. Eight new, certified peer recovery coaches have been added in Summit County to help those struggling with substance abuse issues. “These coaches are on their own path of recovery,” she said, adding they are a key factor in reaching and helping others who are affected by substance abuse. They are on call 24/7, Thier explained, and will go to a hospital to meet a client whenever they get a call. In the past month there have been 85 cases, she added.

She also mentioned support services made possibly by partnerships with Akron-area hospitals and the United Way. Thier said St. John’s Outreach Center plans to offer additional supplemental fitness programs like yoga as another way to help those in recovery. And a second location is expected to open this fall at Blessed Trinity Parish in Akron, which also houses a variety of social outreach programs in its former rectory.

“We have many community partners including the Summit County Alcohol and Drug Addiction & Mental Health Services Board, United Way, Summa Health and more,” she said. The Women’s Board of Catholic Charities of Summit County also provided a grant to help with the purchase of furniture for the new outreach center, Thier said. 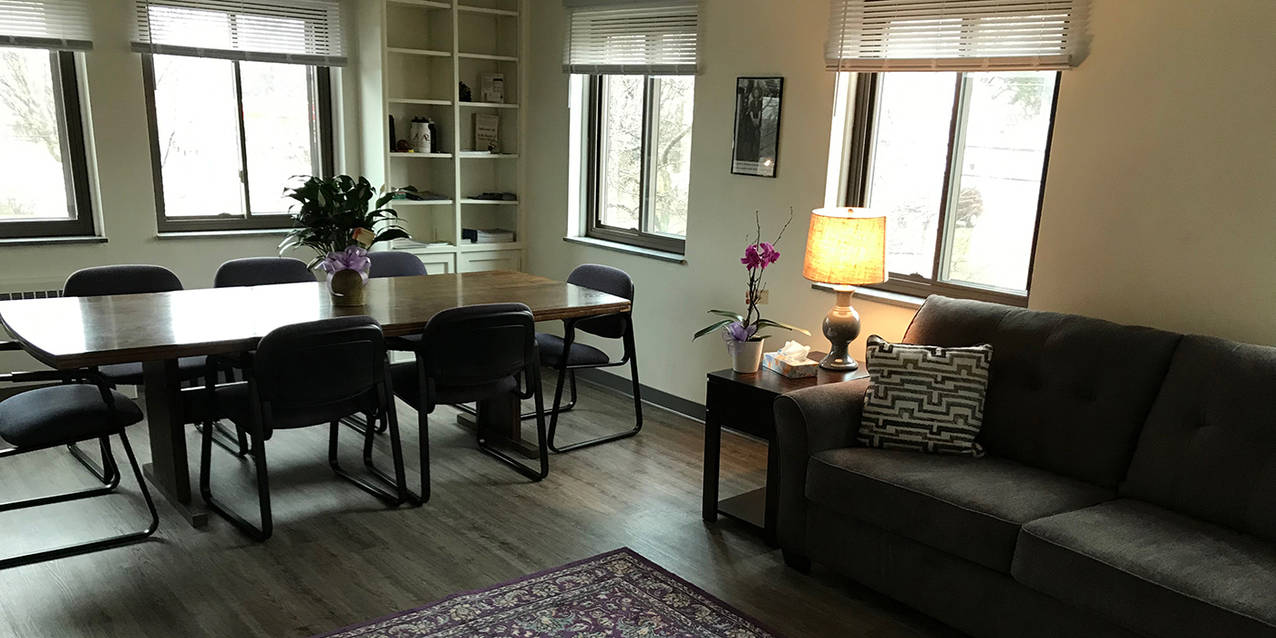 “The building went from a flooded, boarded-up, vacant, damaged facility to the beautiful center it is today, thanks to the support of so many,” she added.

Gerald Craig, ADAMHS board executive director, said his agency’s partnership with Catholic Charities is important to Summit County. About 35,000 residents are touched by their services. “Our goal is to see that no one is left behind when they are seeking help in their darkest days,” he added. Craig said peer support like that provided by the certified peer recovery coaches is important to those in recovery. “They provide a credible image and show that you can overcome your struggle and build loving relationships. The peer recovery program helps rebuild lives.”

Craig also pointed out that Akron is the birthplace of recovery. Alcoholics Anonymous was founded in 1935 in Akron by Dr. Bob Smith. Sister Mary Ignatia, CSA, who was a nurse, worked with him and was instrumental in treating alcoholics at St. Thomas Hospital, also in Akron, and expanding the AA program to St. Vincent Charity Hospital (now St. Vincent Medical Center) in Cleveland when she was assigned there by her congregation. 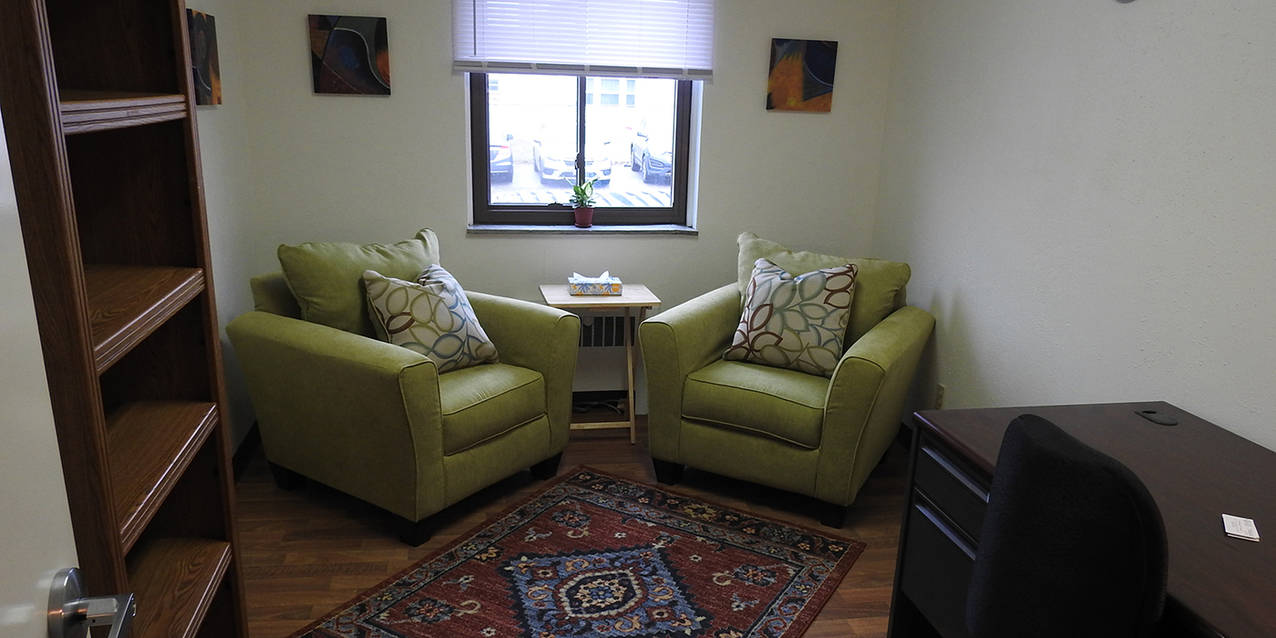 “Congratulations to Catholic Charities for building this legacy of hope in Summit County,” Craig added.

“Thank God for this center which will help people in incredible ways,” said Bishop Nelson Perez. He mentioned Rock and Recovery.com, a nonprofit, locally produced community support program that is delivered through The Summit’s public radio platform. It is designed to help those in recovery and their loved ones.

“They call it a rock,” the bishop said. “Sometimes, when we’re falling, we need to grab onto something like a rock, which becomes a lifeline. For us Christians, Christ is the rock. There goes the Church again – hearing the cry of the poor,” he added. 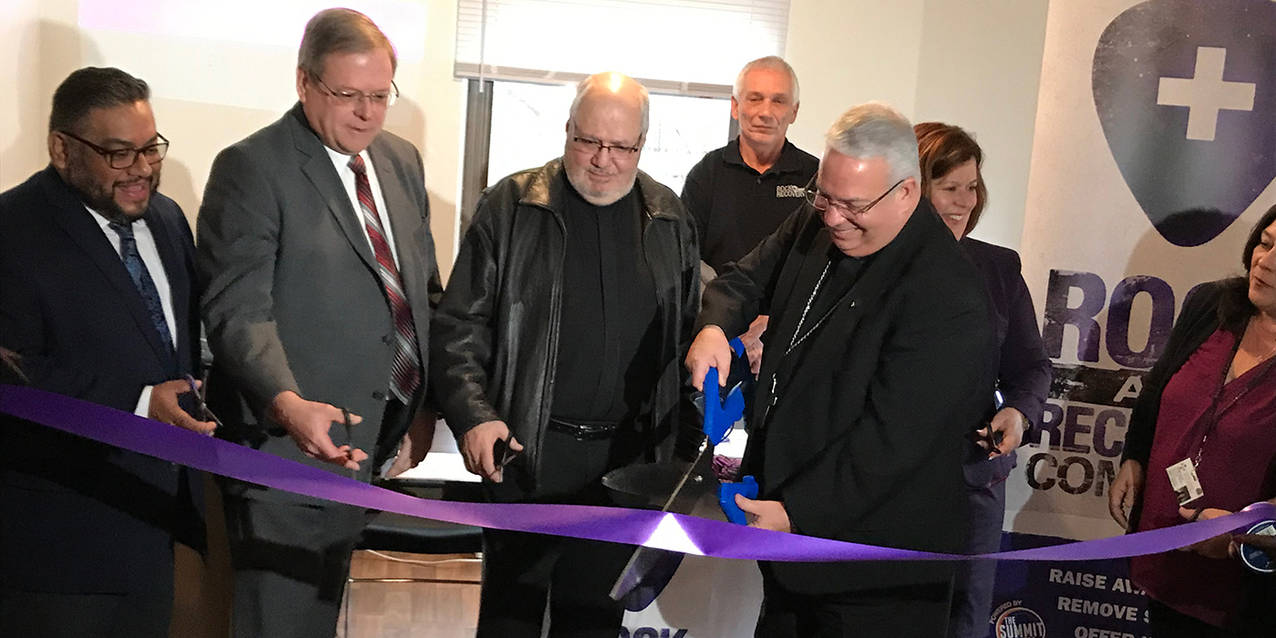 After the new outreach center is out of the news and has settled into its work, he said that work will continue “quietly, compassionately and with great love.” He said the work of Catholic Charities is like that, calling it “the Church’s best-kept secret.”

“We do this work because it’s good and it’s the right thing to do,” he added.

Although the weather prevented the planned outdoor ribbon-cutting ceremony, officials improvised and gathered indoors where Bishop Perez, Gareau, Father Zingales, Thier and others stretched a length of wide purple ribbon and cut it, symbolizing the official beginning of the new outreach center. 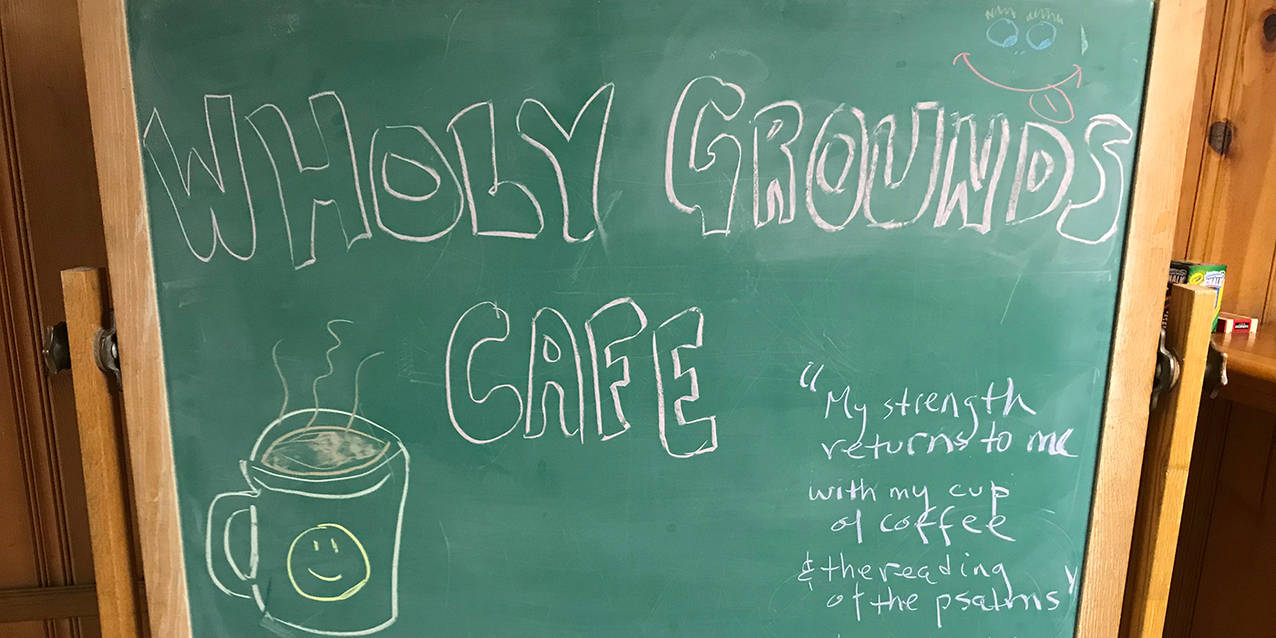 Guests were invited to tour the facility to view the new meeting rooms, offices, treatment space, “safe space” and more. “Wholy Grounds,” a coffee café, is located on the lower level of the building. Outreach center staffers said coffee is important to those struggling with substance abuse – particularly alcohol.

For more information on the programs and services offered by Catholic Charities, Diocese of Cleveland Community Services of Summit County, visit ccsummitcounty.org or call 330-762-2961.