Members of the Akron Bar Association and supporters, including judges, attorneys, law clerks and paralegals, gathered for the annual Red Mass at noon on May 3 at St. Bernard’s Church in Akron.

In his homily, Bishop Perez offered his thanks to those in the legal profession for all they do on a daily basis to ensure justice is delivered. “It’s not always easy and it’s not always black and white,” he added.

In the day’s Gospel, the bishop said we are encouraged to ask for help. “But we’re not wired for that because we think it could make us seem vulnerable, not knowledgeable, weak or insecure.” He recalled feeling embarrassed when as a first-time pastor he had to ask a longtime parishioner for a large donation to the parish capital campaign. “I had to do it for the good of the people of the parish I served,” he said. The parishioner willingly made the donation, he added.

“The Gospel tells us to depend on others – and God – and to ask for help when we need it,” he said.

The bishop also pointed out that the beginning of the Gospel speaks about truth. “You lawyers and judges are involved in the search for truth and justice,” he said, explaining that the Gospel talks about a different truth. Jesus is the source of that truth. In the end, Bishop Perez said the truth in capital letters will be the only one that counts.

“Jesus tells us, ‘I am the way, the truth and the life.’ Remember that,” he added.

Father Rosing presented the award to Heintz, sharing some of his accomplishments during his career.

Heintz, a Silver Lake native, graduated from the University of Akron School of Law in 1975 and worked with Blakemore, Rosen and Norris before joining Browse McDowell in 1984. His practice included corporate counseling, commercial transactions and litigation, real estate matters and title insurance issues. He served as managing partner of the firm 2004-2012. 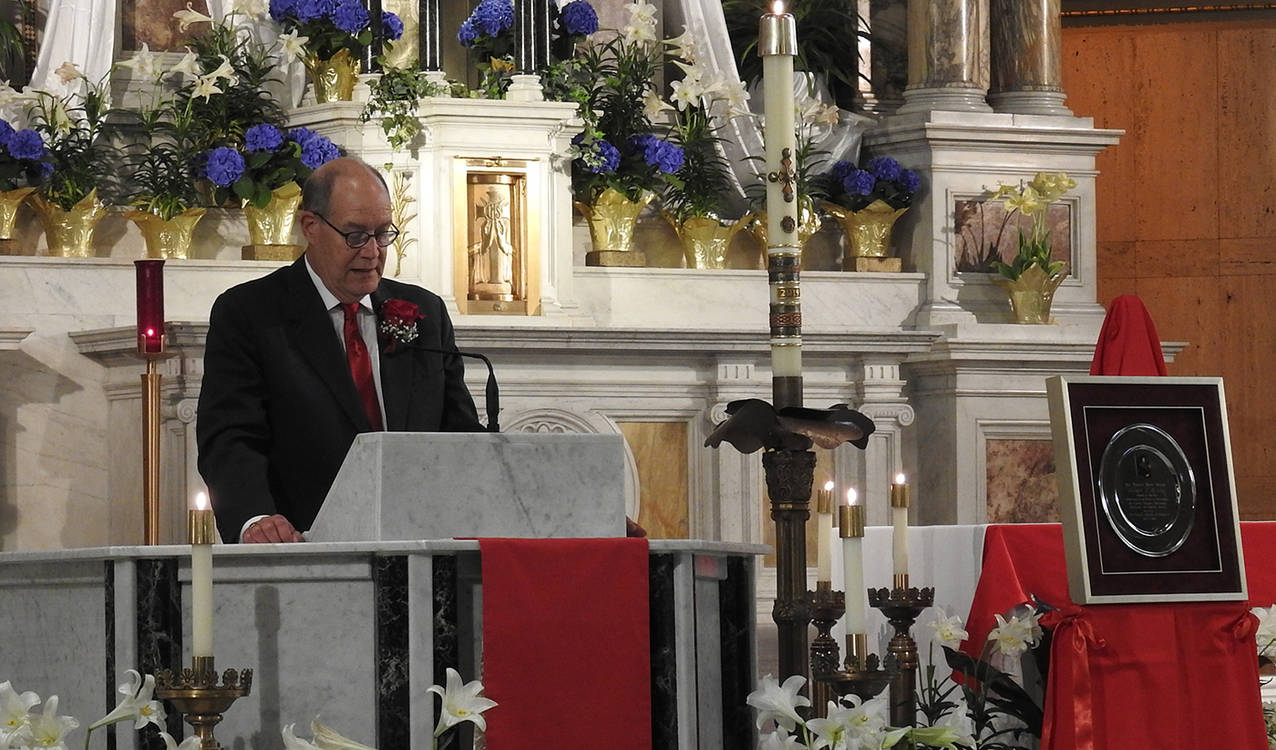 A member of the Akron, Ohio State and North Carolina bar associations, Heintz served as president of the Akron Bar in 2002 and as a member of the board of governors of the Ohio State Bar Association 2009-2012. He also is a past chair of the Ohio Supreme Court Commission on Continuing Legal Education and the Supreme Court’s Board of Professional Conduct, a Distinguished Life Fellow of the Ohio State Bar Foundation and has been an expert witness in cases involving issues of professional responsibility and ethics. He also serves as an arbitrator of fee disputes among lawyers for the OSBA.

In addition to his work in the legal community, Heintz is a past member of the Summit County Alcohol, Drug Abuse and Mental Health Services board, the Summit County Social Services Advisory Board and he chairs the planning commission in his hometown of Silver Lake. He has served on the boards of Junior Achievement, Akron, the Community Hall Foundation, Inc., Boys Hope-Girls Hope of Northeastern Ohio, the Greater Akron Chamber and North Akron Savings Bank.

In 2014, Heintz was named the outstanding alumnus of the University of Akron School of Law and in 2018 he received the Harold K. Stubbs Humanitarian Award for Distinguished Service in Law.

Heintz and his wife, Rose, have two sons and two grandchildren.

“This award is elevated by having Bishop Perez here today,” Heintz said. Throughout his career, Heintz said he “was taught by the best.” He also said he has “watched young lawyers mature into the best lawyers” and acknowledged the role the support of his family played in his success.

During his 47-year marriage, Heintz quipped that he has been a “life partner, but from time to time I was demoted to associate.” However, he added he “always was able to be promoted again.”

Heintz said the Sir Thomas More Award “occupies a place of great honor among lawyers. In closing, he recited the prayer of St. Thomas More.

Criteria for the Thomas More Award includes membership in the bar and/or bench in Summit County or a record of public service; a high degree of intelligence and professional competence; demonstrated concern for the needs of the community evidenced by contributions to the legal profession, service in public office or personal involvement in community affairs; a private life and public career exemplary and in general accord with the religious traditions of our country and this community.

The annual Red Mass is part of the Akron Bar Association’s observance of Law Week.

After the Mass and award presentation, there was a lunch in the church hall.