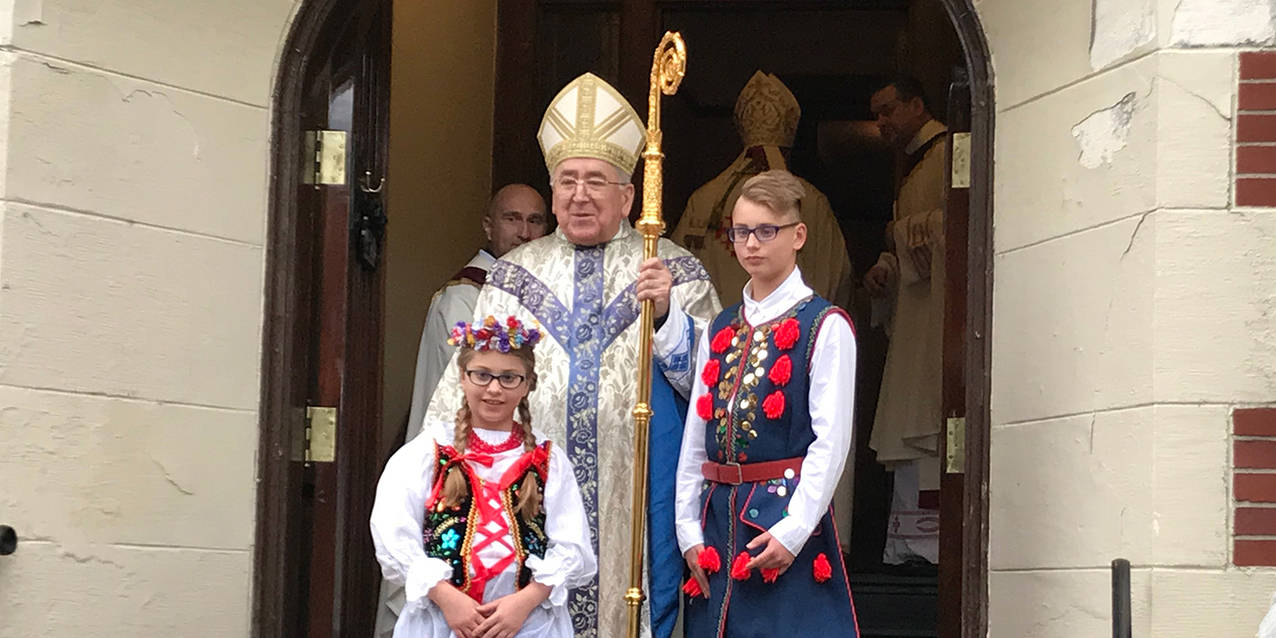 The cardinal, who was born near Krakow, Poland, was ordained in 1969 by then-Cardinal Karol Wojtyla who later became Pope John Paul II. His close affiliation with the late pope continued as he served in seminary formation in Krakow and then with the Polish Bishops’ Conference. He was called to Rome by Pope John Paul II in 1987 to serve in the Pontifical Council for the Laity and helped to organize World Youth Days. In 1992, he was transferred to work at the Secretary of State and in 1995 he was elevated to archbishop and named secretary of the Laity Council, becoming its president in 2003.

Pope Benedict named him a cardinal in 2007 and he served in a number of curial positions. In 2016 Pope Francis named him archpriest at St. Mary Major. He was accompanied by Father Christopher Wielicko, OSPPE, administrator of the John Paul II Foundation, who helped with translation.“Your eminence, thank you for being here,” Bishop Nelson Perez said at the May 21 Mass that he concelebrated with Chorbishop Anthony Spinosa, rector at the Basilica and National Shrine of Our Lady of Lebanon in North Jackson. 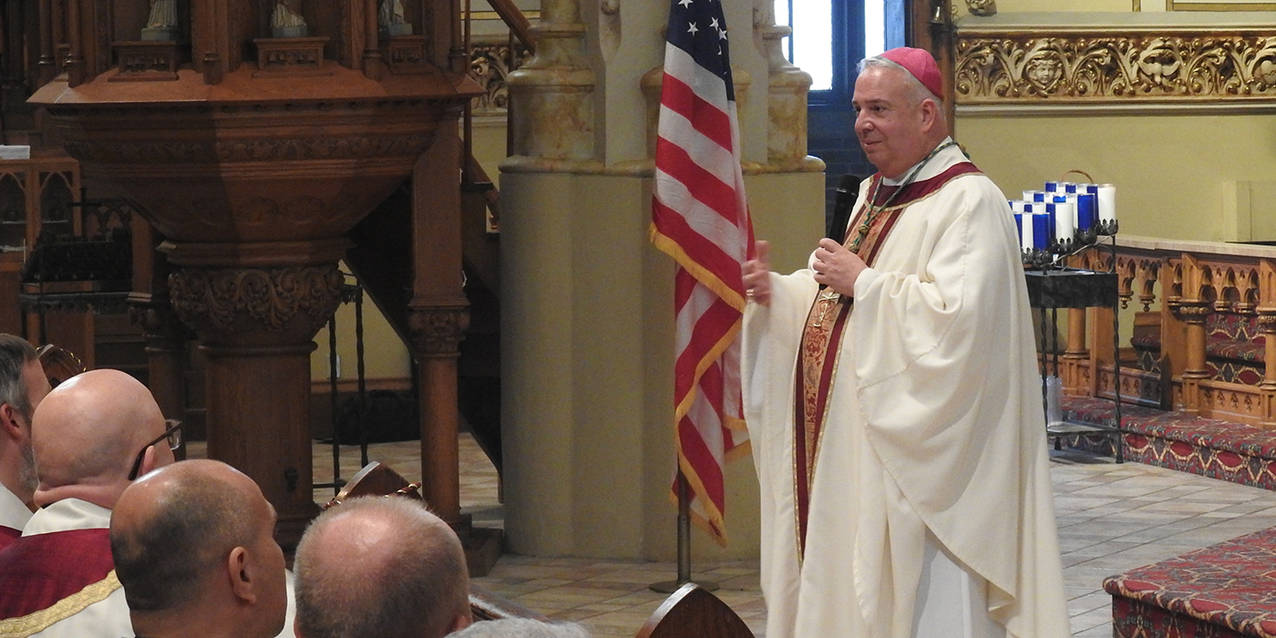 Representatives of the local Polish community in native dress presented the cardinal with the traditional gifts of bread, salt and flowers.

In his homily, the bishop noted that St. Paul had to contend with many cultural issues in the early Church, including the friction between Judaism and the Gentiles. “In the first chapters of Acts, you see that Paul addresses this with patience and perseverance. He went to communities and tried to sort out their lives, to teach, challenge and reprimand them.”

He said Paul followed what Jesus said in John’s Gospel: “do not let your heart be troubled.”

Bishop Perez recalled visiting Krakow for World Youth Days a few years ago, calling it a beautiful city and sharing some of its history. He also recalled hearing that then-Cardinal Wojtyla had been elected pope in 1978 – the first non-Italian pope in four centuries – and shared some of his personal encounters with him. The first was when Bishop Perez was a high school student and he saw the pope at Madison Square Garden in New York City. He said he remembered Pope John Paul II, who had been athletic and whom he described as a very strong man, picking up a young girl.

“Years later, during his last visit to New York, that girl – now an adult – brought up the gifts at Mass,” he said. 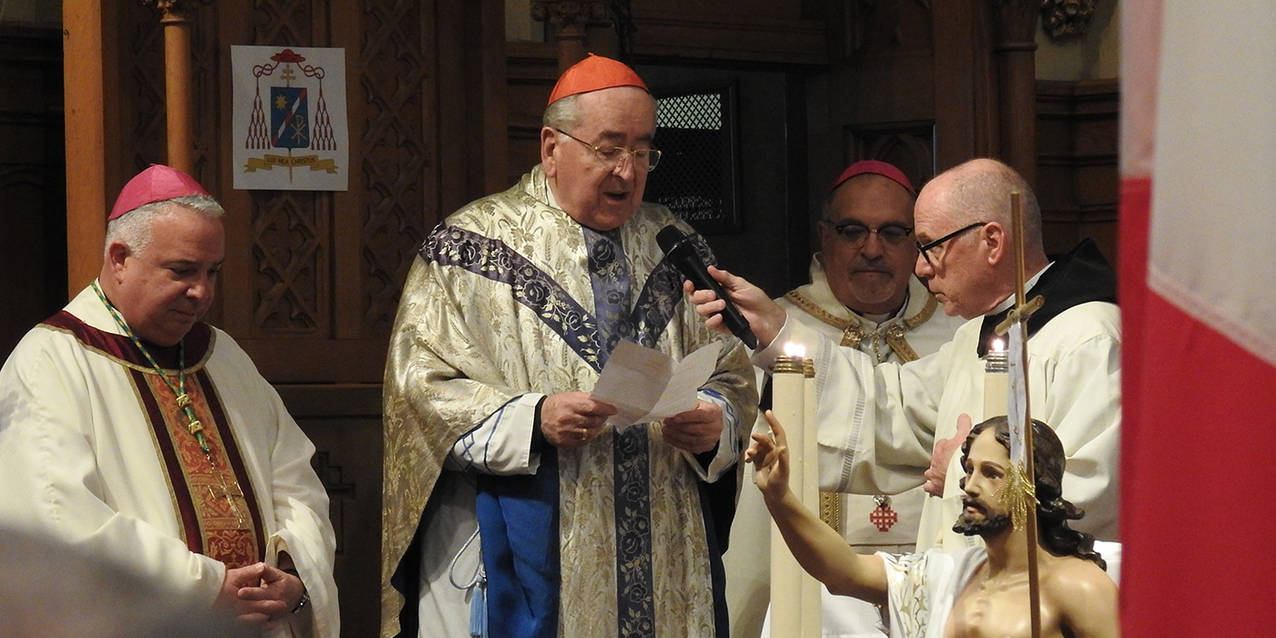 He also encountered the pope in Puerto Rico and Cuba, his parents’ homeland. During one visit to Shea Stadium in New York, the bishop said it had been raining but the rain stopped when the pope’s helicopter landed and during the Mass. As he left, the rain resumed.

“He traveled the world. He loved being among young people,” Bishop Perez said, recalling one time when the youth chanted that they loved the pope and asked him not to leave.

Pope Paul VI called us to evangelization and Pope Francis tells us to be missionary disciples, he said. “Our faith is not to be kept locked away. It needs to be shared and proclaimed with passion and joy,” Bishop Perez said. “The last word of Jesus before he ascended to heaven was ‘go.’ He told the disciples to baptize in the name of the Father, Son and Holy Spirit. We must give as a gift what we received as a gift. If the disciples hadn’t done what they did, we wouldn’t be here today.” 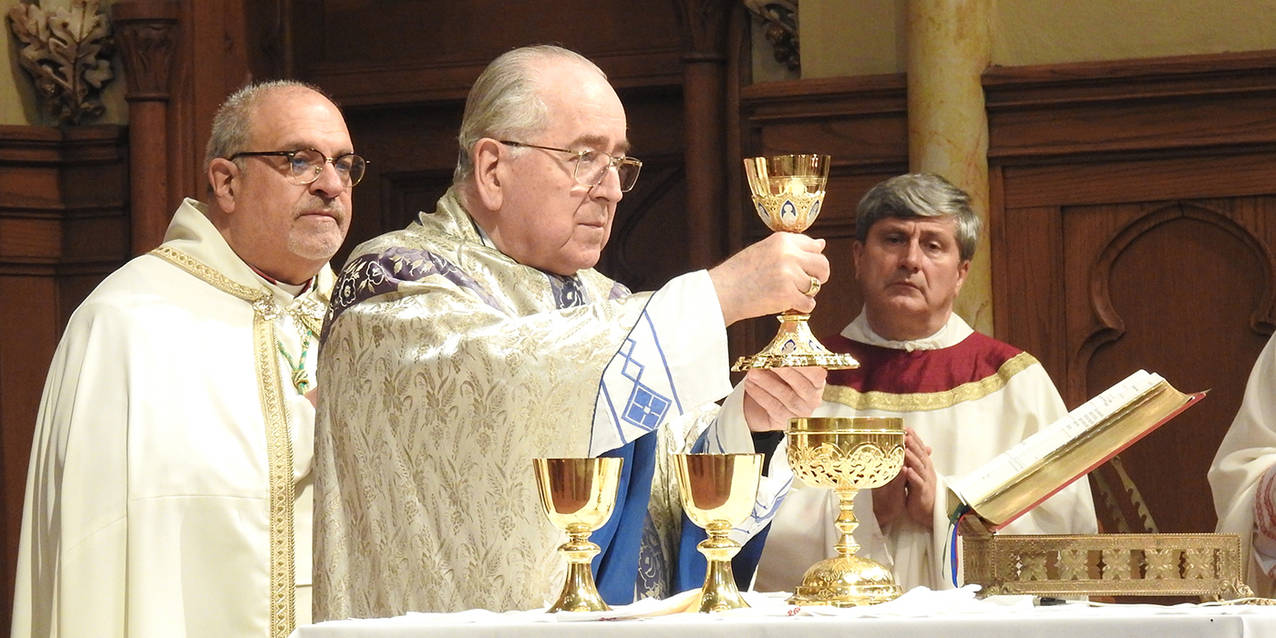 The world is changing and sometimes the Church faces pressure to conform, the bishop said. “But the Church must be steadfast to the truth.”

A banquet at the historic Bohemian National Hall in Slavic Village followed the May 21 Mass. Father Orzech offered congratulations and a toast to the cardinal, who is celebrating the 50th anniversary of his ordination.

Independence Mayor Anthony Togliatti, president of the local Friends of John Paul II Foundation Ohio, made brief remarks after dinner sharing successes of the foundation, including its growth. Chapters were started in Mexico and Jakarta, Indonesia and a representative of the Indonesian chapter attended the Cleveland events. 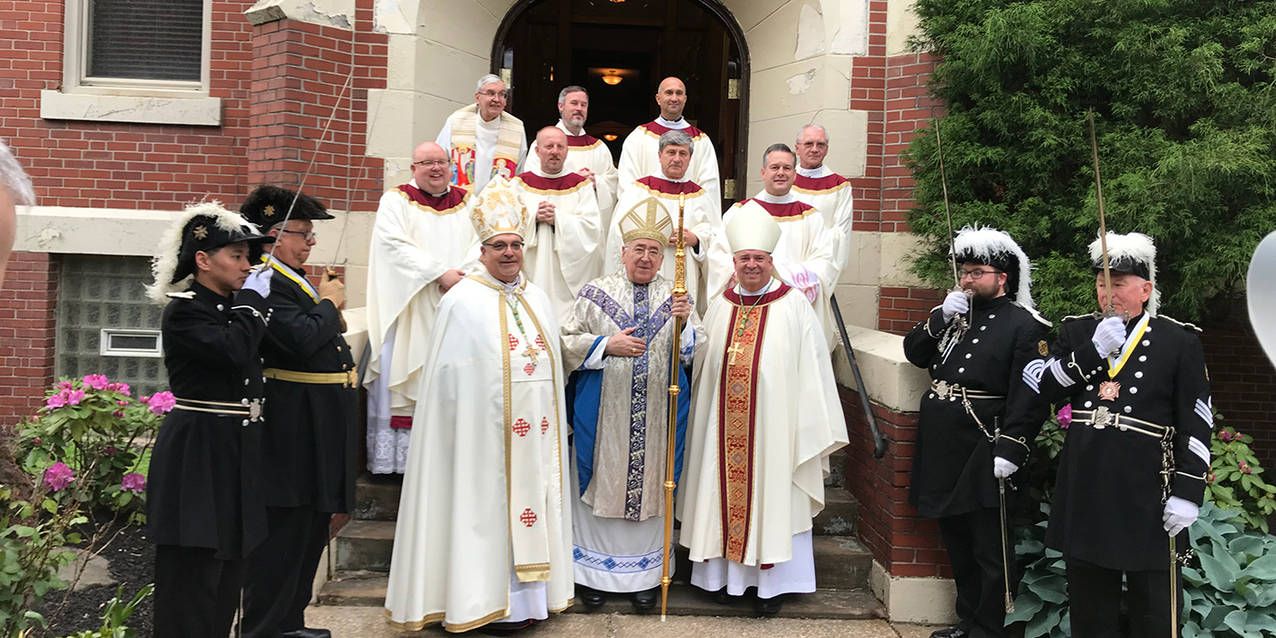 “Next year, we will be celebrating the 100th anniversary of John Paul II’s birth with a pilgrimage to Rome April 24-27, 2020,” Togliatti said.

The cardinal made brief remarks noting that the late Popes John Paul II and Paul VI were great missionaries. “This world needs that,” he added.

Referencing a book, “A Pope Who Doesn’t Die: The Inheritance of John Paul II” by Italian author Gian Franco Svide, the cardinal said St. John Paul II had one of the longest pontificates at 27 years and his teachings are still relevant. Preparation for the 100th anniversary of his birth began on May 18. The late pontiff was born on May 18, 1920 in Wadowice, Poland.

The cardinal’s visit continued on May 23 with a Mass at St. Stanislaus Church and a fundraising lunch at the Polish American Cultural Center in Slavic Village. Prior to the Mass, students from St. Stanislaus School presented the cardinal with some gifts and sang a special song. He thanked them and offered a special blessing. 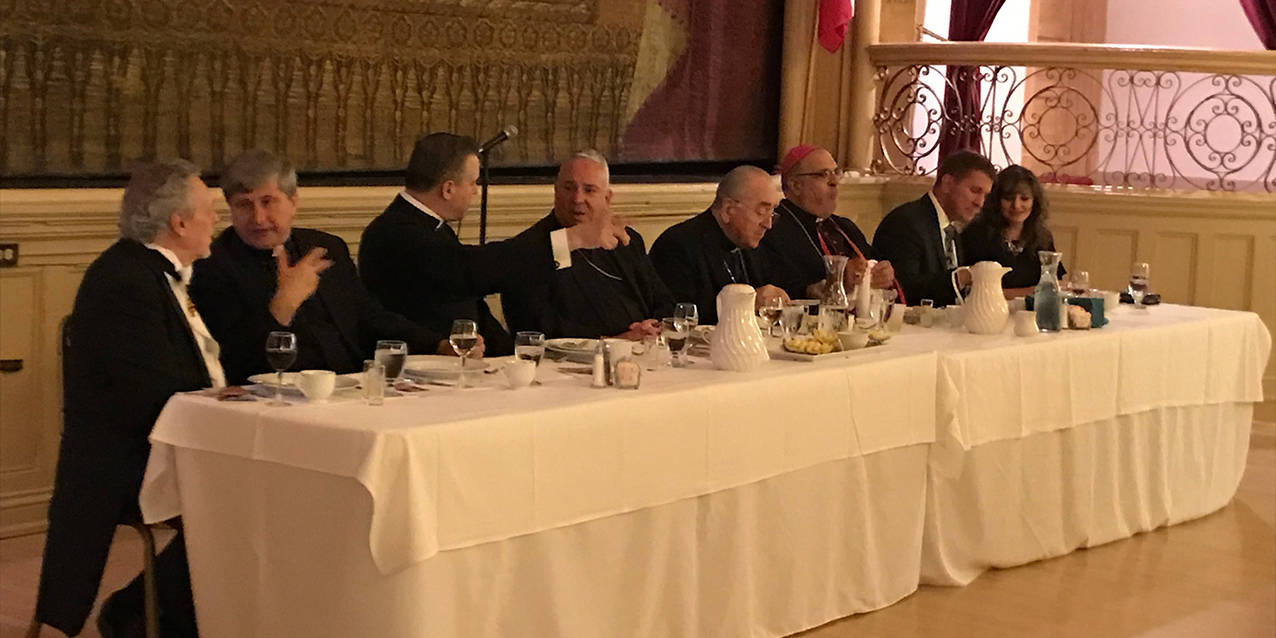 The John Paul II Foundation, which was established by the late pope by papal decree on Oct. 16, 1981, is a religious, educational, charitable and nonprofit organization that is based in the Vatican. It was charged with carrying out his vision for the new evangelization.

The main goals of the foundation include providing educational assistance and scholarships to young intellectuals from Eastern European countries to study at the Catholic University of Lublin and the Pontifical University of John Paul II in Krakow; preservation and development of the spiritual heritage of St. John Paul II as well as Christian heritage and culture; collection and preservation of documents and propagation of the late pope’s teaching and assistance to Christian pilgrims on visits to the Holy See.

For more information on the foundation, visit forlifeandfamily.org.

Visit jp2ohio.com for details on the local foundation, including how to join and make donations.