A group of Emerald Village residents gathered in the building lobby early on July 15, anxiously awaiting a visit from Bishop Nelson Perez. He was accompanied by Patrick Gareau, CEO and president of Catholic Charities, Diocese of Cleveland.

Emerald Village, 30344 Lorain Road -- at the western end of North Olmsted -- was developed in 2007 as a collaborative of Catholic Charities, St. Augustine Health Ministries and Vista Prairie Communities. The modern facility has 100 independent living units and 30 assisted living units for active seniors older than 55. 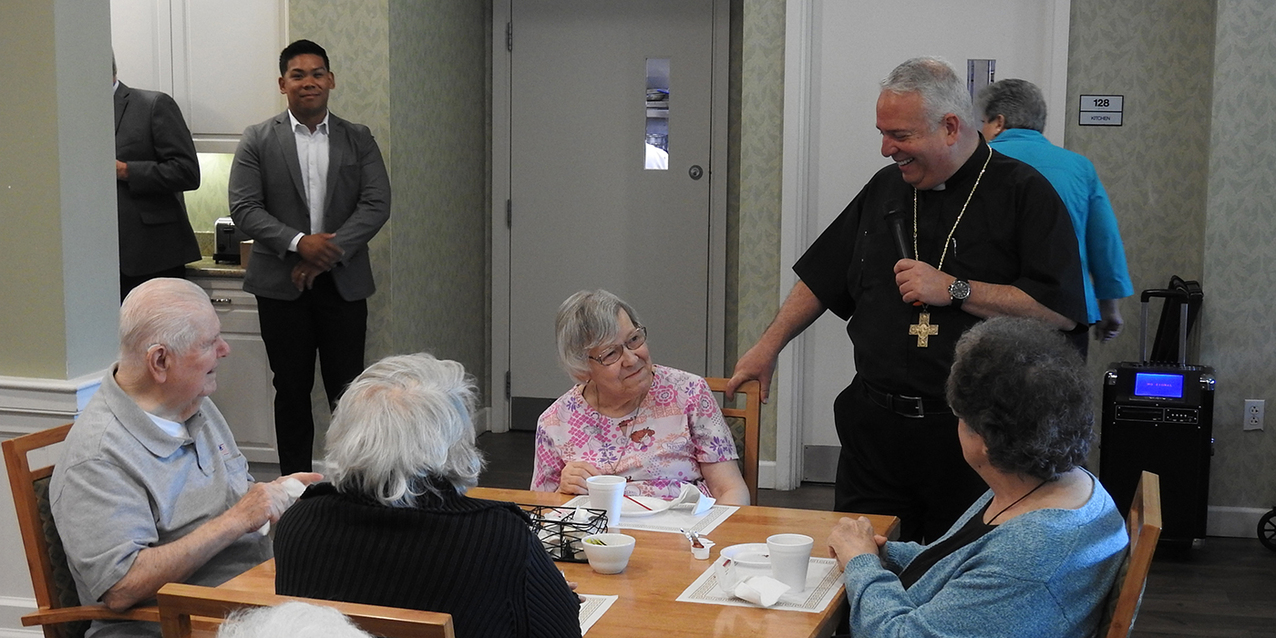 The bishop greeted residents, shaking hands and asking about them before MJ Giovanetti, Emerald Village director, led him on a tour. The first stop was at the apartment of Rosemary Link, grandmother of Father John Betters, pastor of SS. Robert and William and St. John of the Cross parishes in Euclid. She was one of Emerald Village’s original residents and showed the bishop around her immaculate two-bedroom unit.

“I just love it here,” she said, adding that she likes the fact that it is next door to St. Clarence Parish. Residents can attend Mass there or in the building’s small chapel and the rosary is led by residents during the week in the chapel.

The tour included stops in a common area, the recreation director’s office which has a balcony and a great view of the Cleveland Metroparks’ Bradley Woods Reservation, which abuts the Emerald Village property, and the facility’s library. 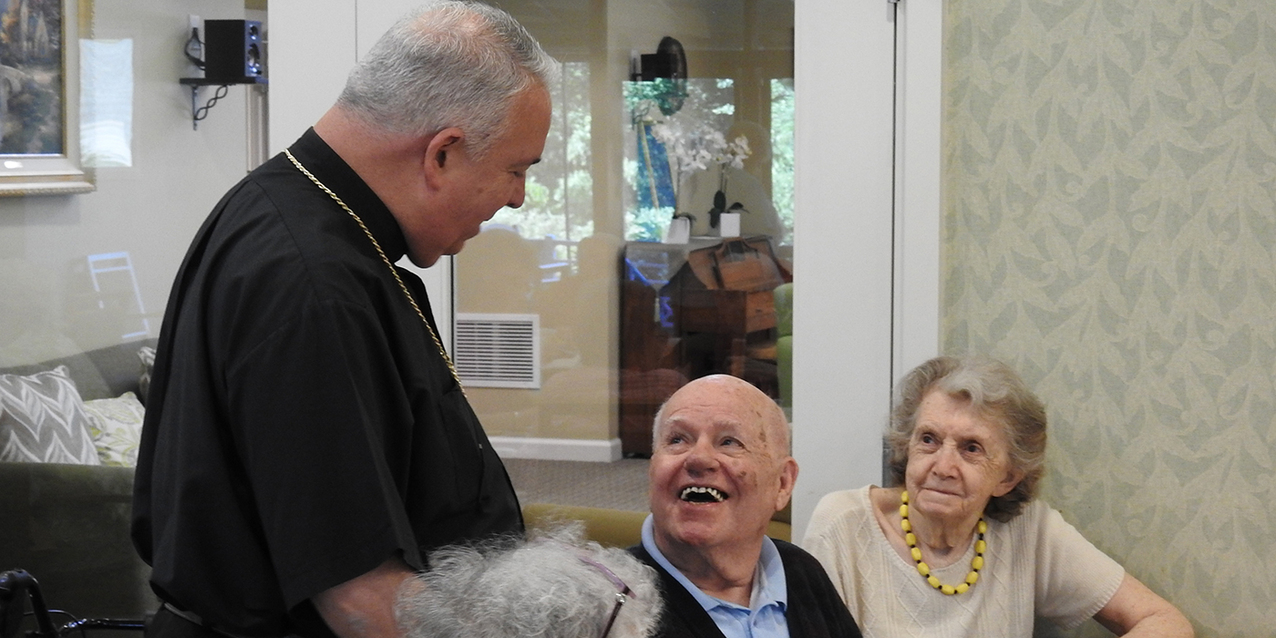 The group also visited the assisted living wing, where the bishop greeted several residents who were finishing breakfast.

Next was a stop in the main dining room on the first floor where dozens of residents gathered for coffee, donuts and conversation with Bishop Perez. He made the rounds, greeting residents individually and then he addressed the group and took a few questions.

One woman who has a connection to the Sisters of Charity of St. Augustine mentioned that the congregation is experiencing a decline in vocations and asked how she and others could help. 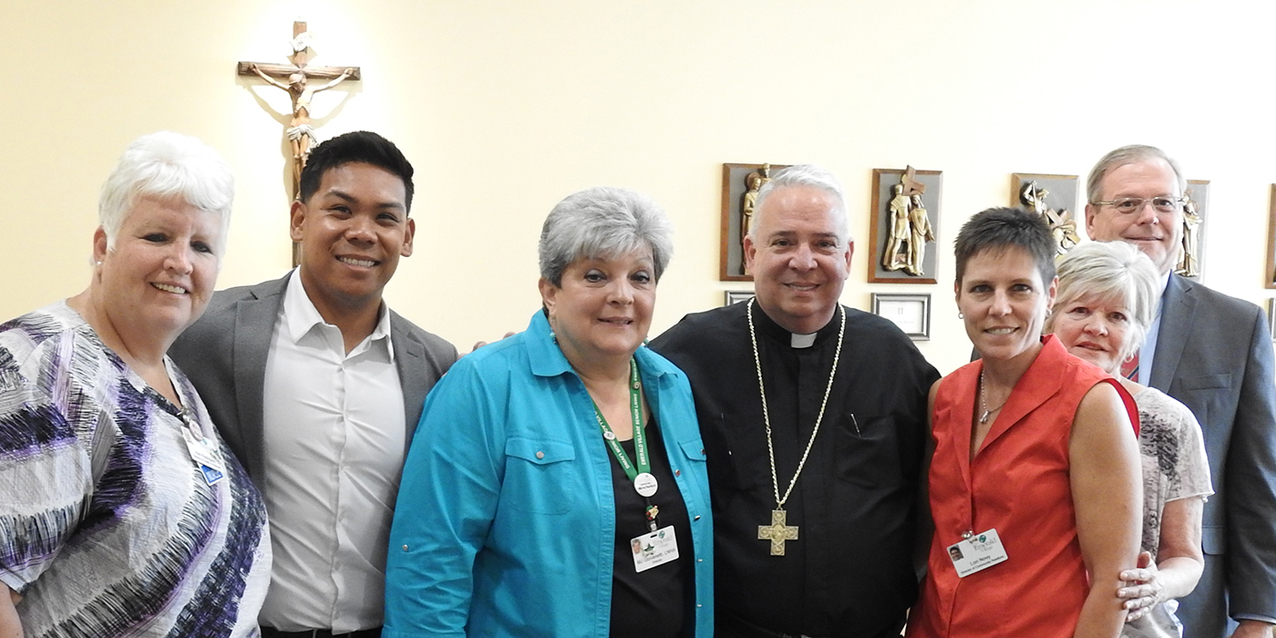 The bishop encouraged the residents to talk to their grandchildren and others about considering a vocation in religious life.

He told the group about St.Therese of Lisieux, whose religious name was St. Therese of the Child Jesus and the Holy Face. She entered the Carmelite convent in Lisieux, France at age 15 to give her life to Jesus. She lived a simple life of prayer. After a long battle with tuberculosis, she died at age 24. 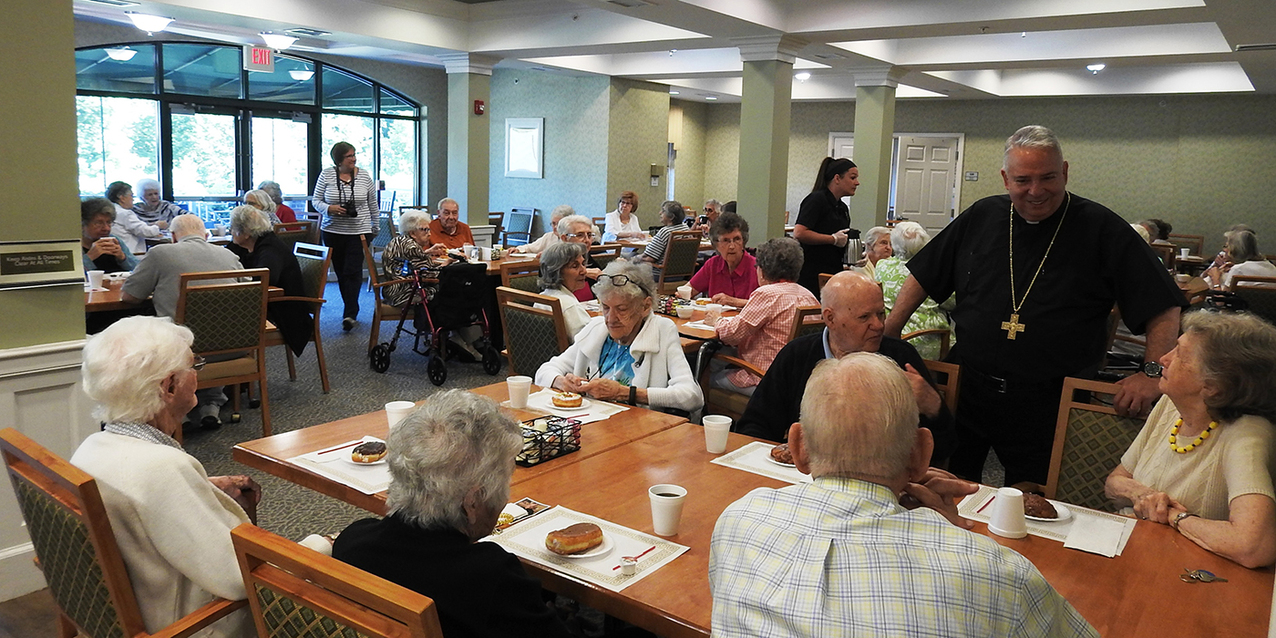 “She never left her monastery, but she is the patron saint of missionaries,” the bishop said, explaining that she prayed for missionaries and their work.

Another person asked if there was any more conversation about possible canonization of the four churchwomen -- three nuns (two Maryknoll sisters and one Ursuline sister) and a lay woman -- who were murdered in El Salvador on Dec. 2, 1980, during the country’s civil war. He said yes, there has been more conversation.

The bishop recalled celebrating a Mass at the Cathedral of St. John the Evangelist in downtown Cleveland on Oct. 14, 2018, the day of Archbishop Oscar Romero’s canonization. He had been murdered while celebrating Mass on March 24, 1980 in El Salvador. There was talk of the churchwomen’s cause for sainthood at the time of his canonization, the bishop said, adding that the Maryknoll and Ursuline communities also have had some conversation. 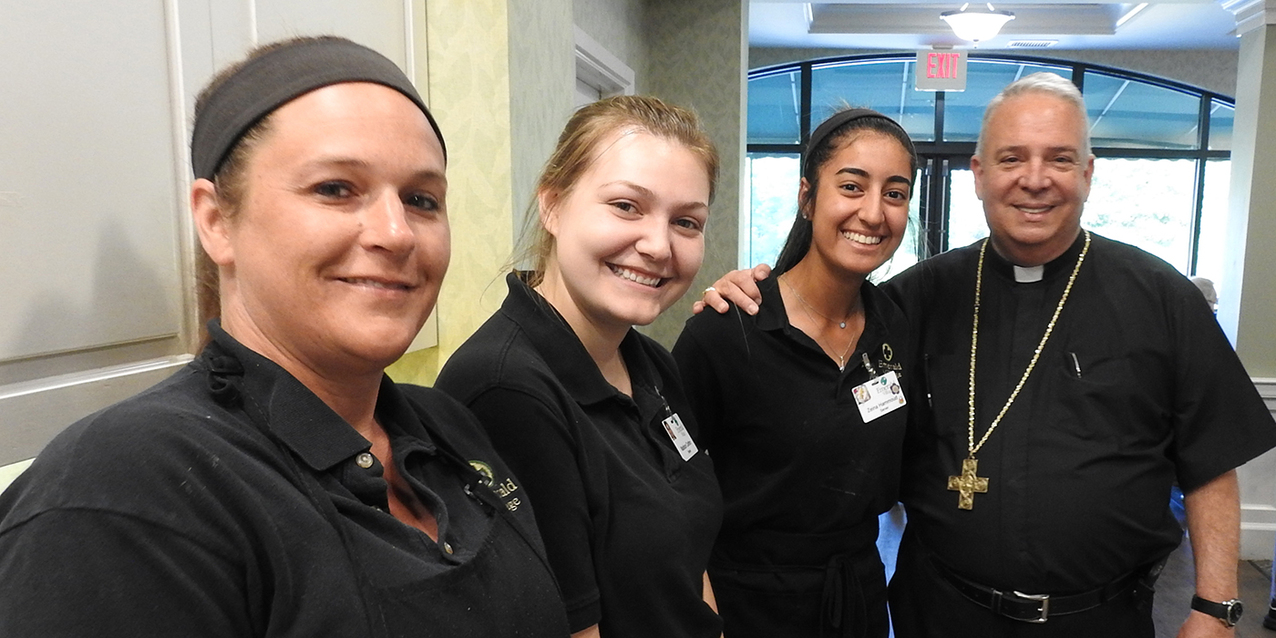 “Pray for their cause. I’d love to see the cause for sainthood of these women proceed,” the bishop added.