The priesthood wasn’t even on the radar for young Bryan Norton while he was a student at St. Michael School in Independence and St. Ignatius High School in Cleveland. But things were taking place that later would lead him on a path to the Society of Jesus and eventual ordination as a Jesuit priest.

Father Bryan Norton, SJ, was one of four priests ordained in the Jesuits’ Midwest Province on June 8 at the Church of the Gesu in Milwaukee, Wisconsin. He shared his story, “From Pupil to Priest: A Wildcat’s Jesuit Journey,” with the First Friday Club of Cleveland at its Aug. 1 lunch program. 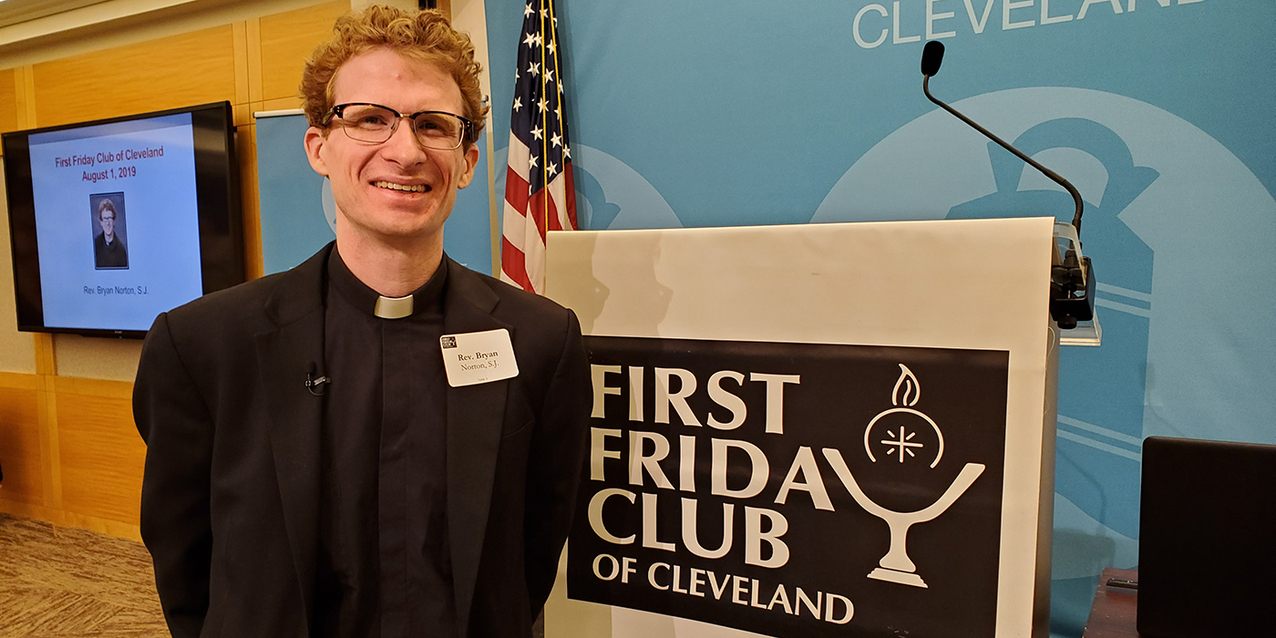 “I’ve known him since second grade,” the deacon said, adding, “I think of him as a son. I mentored him and sometimes the role reverses. We did that,” he added. As he recounted Father Norton’s accomplishments, Deacon Primozic made another observation: “He always graduates at the top of his class.”

Deacon Primozic recalled how thrilled he was to assist at Father Norton’s June 8 ordination Mass and at his Mass of Thanksgiving. 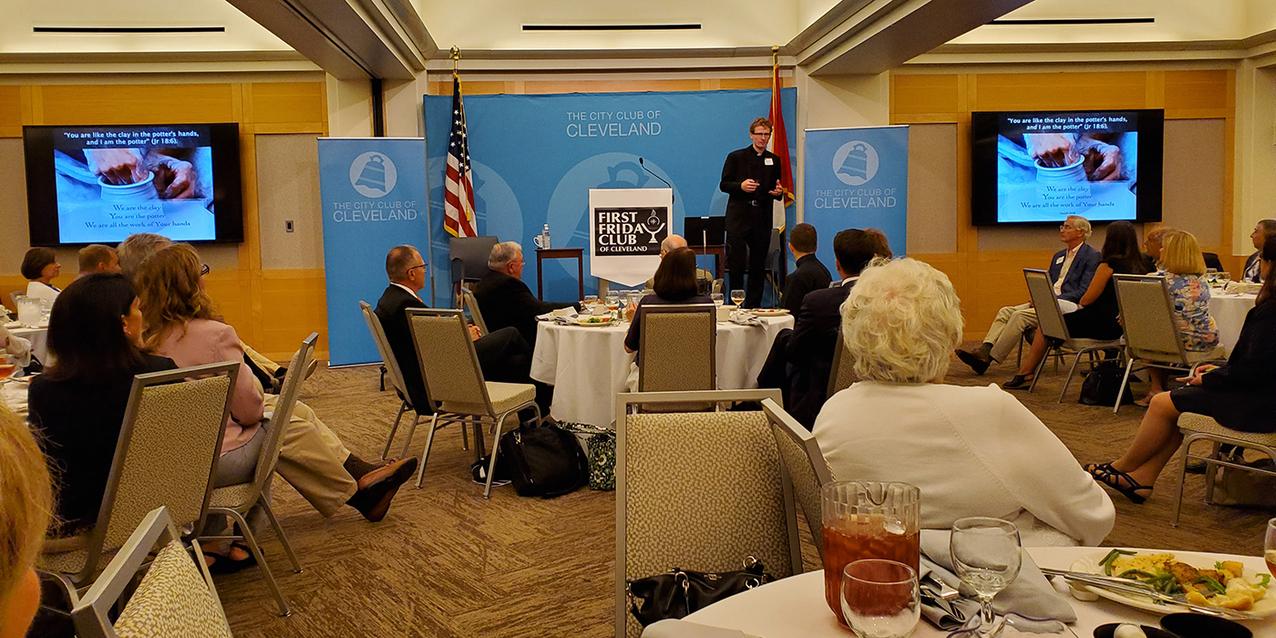 “Here’s something you won’t learn in his CV (curriculum vitae): he gets along with everybody. He’s always accommodating and serving others. You’ll only read about his academic achievements and his successes,” the deacon said, suggesting that Father Norton add a few things to his CV: “St. Michael School and your mother, Barbara. Both were important in your formation.”

Father Norton said there are five “Fs” that were important in his journey: formation, friendship, fullness, fragility and freedom.

The youngest of three children, he first encountered the Jesuits at St. Ignatius, a place he loved and found difficult to leave. He spoke fondly of several priests and teachers who helped with his formation prior to his graduation in 2003. In addition to a solid academic program, he learned about service. He recalled being a member of the initial Labre Ministry group that went into the streets of Cleveland meeting the homeless where they are, bringing them food and developing a relationship with them. The program just completed its 864th consecutive Sunday night ministry and has expanded to other high schools and colleges.

Father Norton said he always wanted to be a teacher, something that could be attributed to the example of his mother, who was a teacher. His high school academics helped foster that desire and he decided to attend college at Williams College, a small liberal arts school in Williamstown, Massachusetts.

He knew no one when he arrived on campus and said the adjustment from his beloved high school was tougher than expected. However, after visiting the Newman room on campus – at the suggestion of his mother – Father Norton said things began to change. “I found a sense of community in Christ. I began to pray and I began to think that maybe God wants me to be a priest. That was never on my radar,” he said. 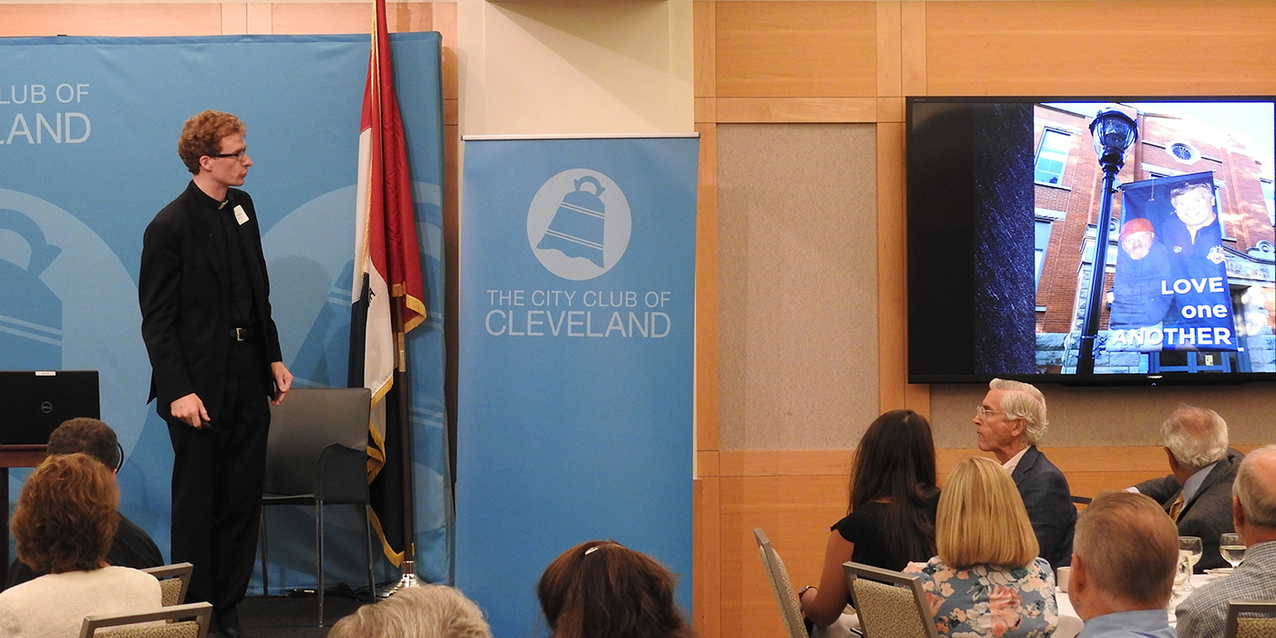 He dealt with his loneliness through prayer and reflection, developing a friendship with the Lord and taking time to develop that relationship.

That led to the third “F,” fullness, he said, explaining, “God wants us to be happy.”

After hearing his call to the priesthood, he said he had to decide what path he wanted to follow – diocesan priest, Jesuit or some other order. “I realized that I could do what I loved – teach – and still be a Jesuit priest. It took a while to realize that maybe God gave me these gifts and desires so I could use them to serve him,” he said, something that provided him with fulfillment and fullness. After graduating from Williams with a degree in philosophy in 2007, he joined the Jesuits in 2008 in Detroit, Michigan. “And I never looked back,” he said. 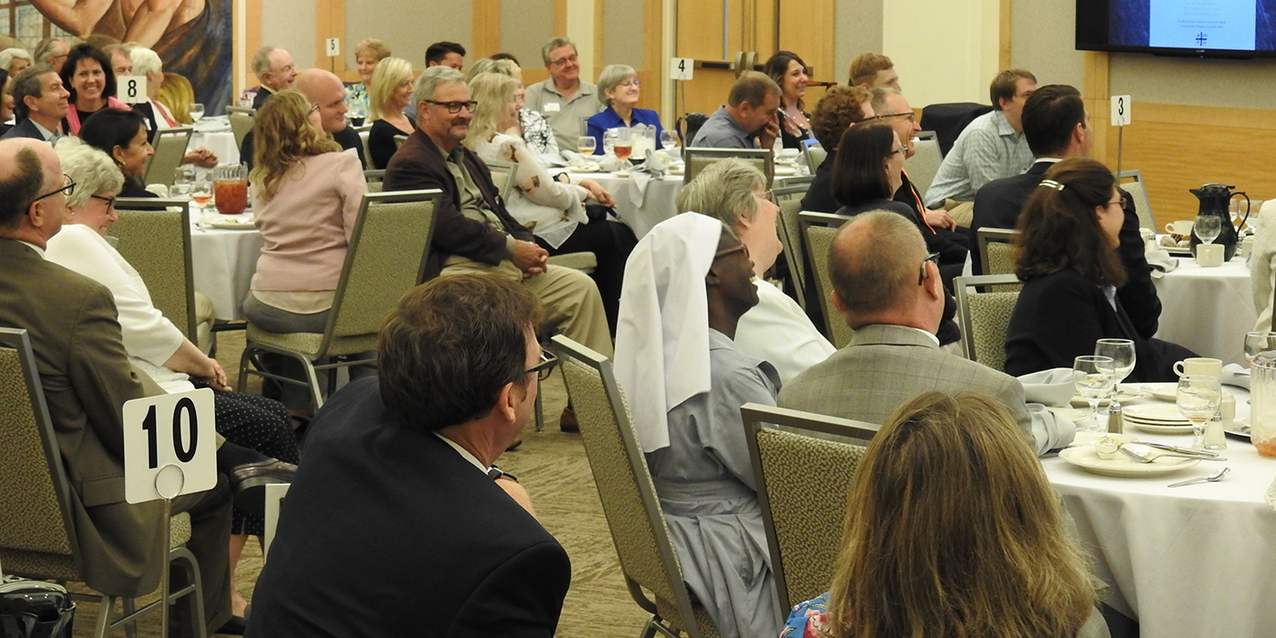 As a novice, he worked extensively with adolescents in Detroit. After professing his first vows, he spent four years studying in St. Louis, Missouri, including earning a master’s degree in classics – Latin and Greek -- from Washington University.

As he progressed in his Jesuit formation, Father Norton taught classical languages and literature at Xavier University in Cincinnati 2014-2016.

“My cup was overflowing at Xavier,” he said. 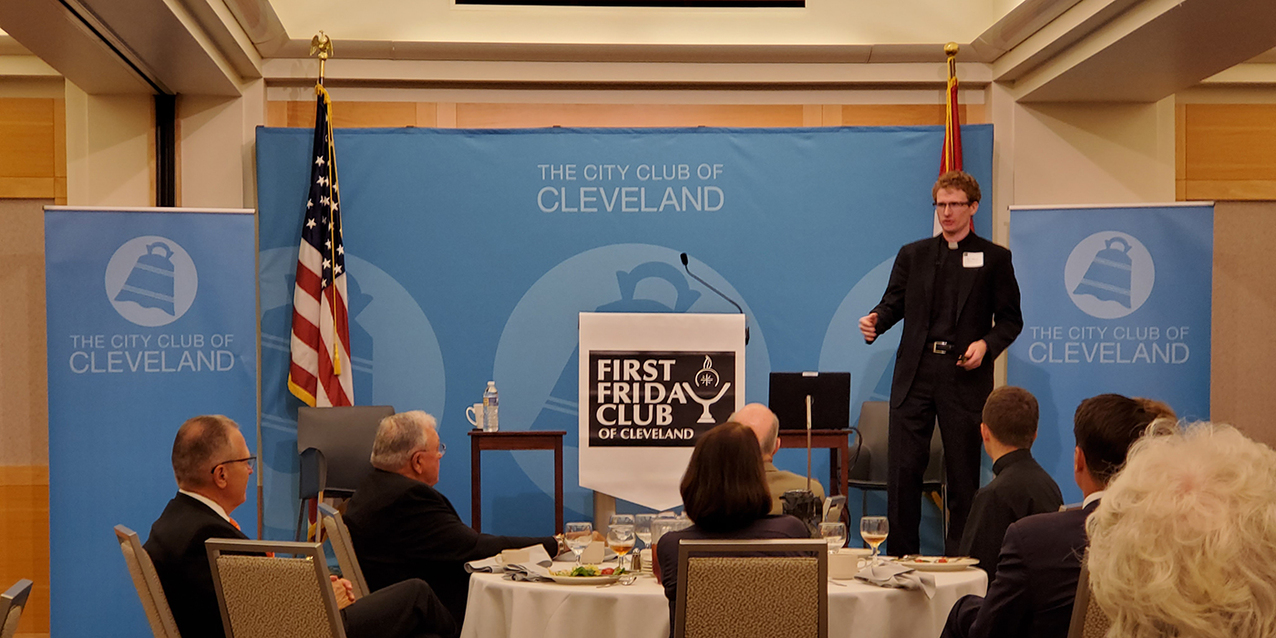 He also recalled how he confronted fragility, another of the “Fs,” when in 2012 he embarked on a five-week, 3,000-mile journey accompanying migrants from Honduras to El Paso, Texas. “There was so much suffering,” he said. Father Norton encountered his own suffering and fragility after falling ill – possibly from drinking tainted water -- in Mexico. His condition deteriorated to the point where he had to spend a few days in a clinic before resuming his journey.

The fifth “F,” freedom, was something he encountered after being assigned in the summer of 2016 to study theology in Paris. “Going abroad was like being born again,” he said. 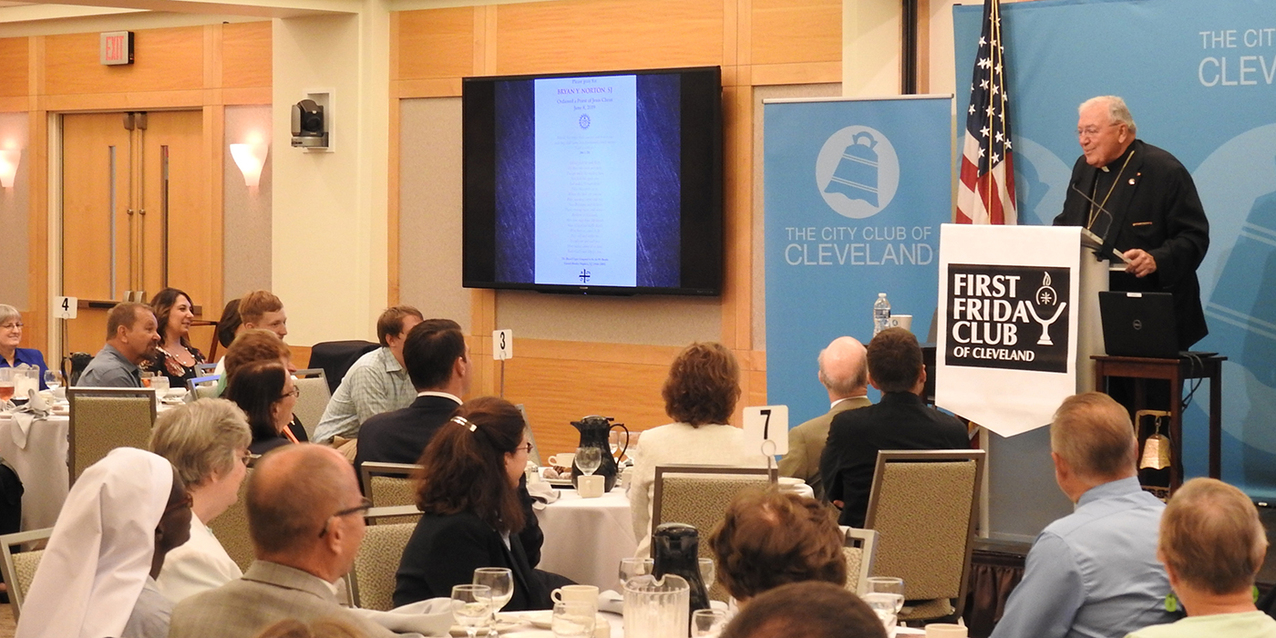 Father Norton worked closely with the Brothers of Saint John of God caring for the sick. “I learned to embrace limitations,” he said, and the experience also helped him prepare for his priestly ordination. He spent his diaconate year before ordination to the priesthood serving at St. Ignatius Church in Paris and St. Peter’s Church in Saint Denis.

“Freedom is a gift from God. Nothing can separate me from the love of God in Christ Jesus. Knowing that God has my back means I can surrender to him,” he said, adding that the grace of freedom is the realization that God is with us always.

Attendees at the program each received one of Father Norton’s ordination holy cards with an icon of Mary caressing baby Jesus. He described Mary as, our icon -- the receiver and bearer of Christ. “We are receivers and bearers of the word of God; we are the fruit of Christ himself. Each day is Christmas. May Christ be born again in you and may he be in your hearts for the greater glory of God,” he said. 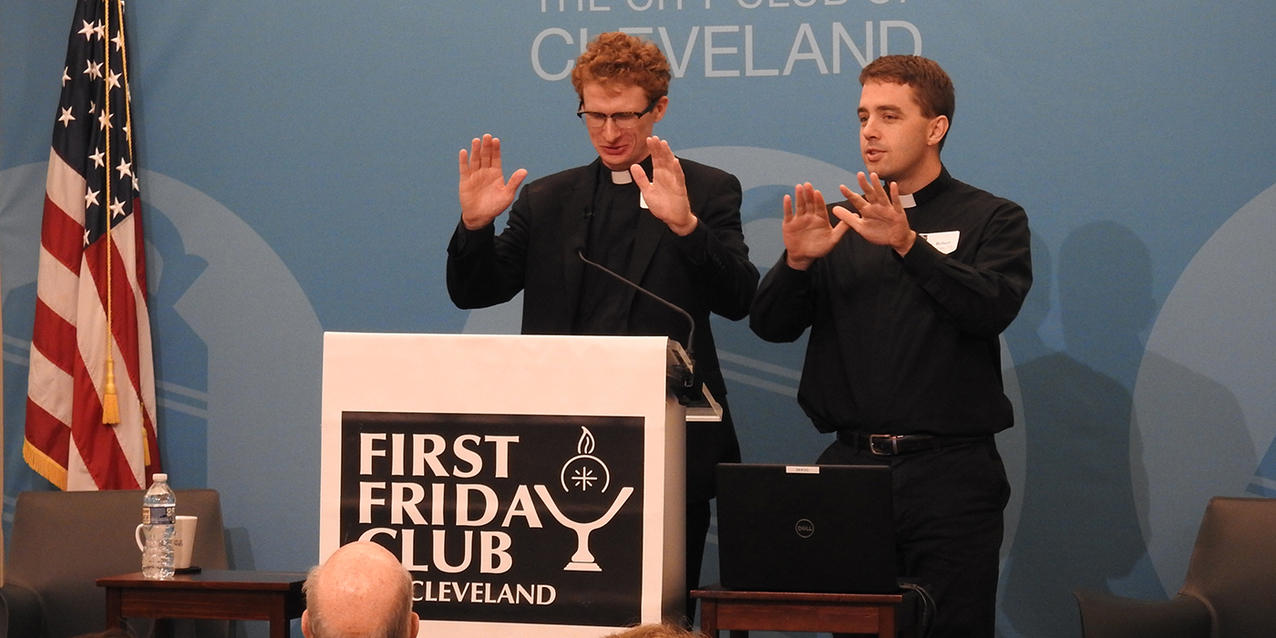 After the program, Auxiliary Bishop emeritus Roger Gries offered a closing prayer and asked Father Norton and his friend, Father Rob Van Alstyne, SJ, another recently ordained Jesuit priest, to offer a final blessing for all.

The next program will be at 11:30 a.m. Aug. 29, when Notre Dame Sister Cecilia Liberatore will speak on “Human Trafficking: Human Tragedy, Human Hope.” Tickets are $25 or $250 for a table of 10. Click HERE for more information or to make reservations.