“Buona festa (happy feast),” Bishop Nelson Perez said as he greeted the faithful who filled every nook and cranny of Holy Rosary Church in Cleveland’s Little Italy neighborhood on Aug. 15.

The bishop, who was joined by Auxiliary Bishop emeritus Roger Gries, Bishop emeritus Anthony Pilla and Archbishop Timothy Broglio, who heads the Archdiocese for the Military Services, celebrated 10 a.m. Mass on the feast of the Assumption. Several other priests, including Holy Rosary pastor Father Joseph Previte, concelebrated. Deacon Bruce Battista, who serves at Holy Rosary, assisted. The archbishop is a native of the diocese and has attended the Assumption Mass many times. 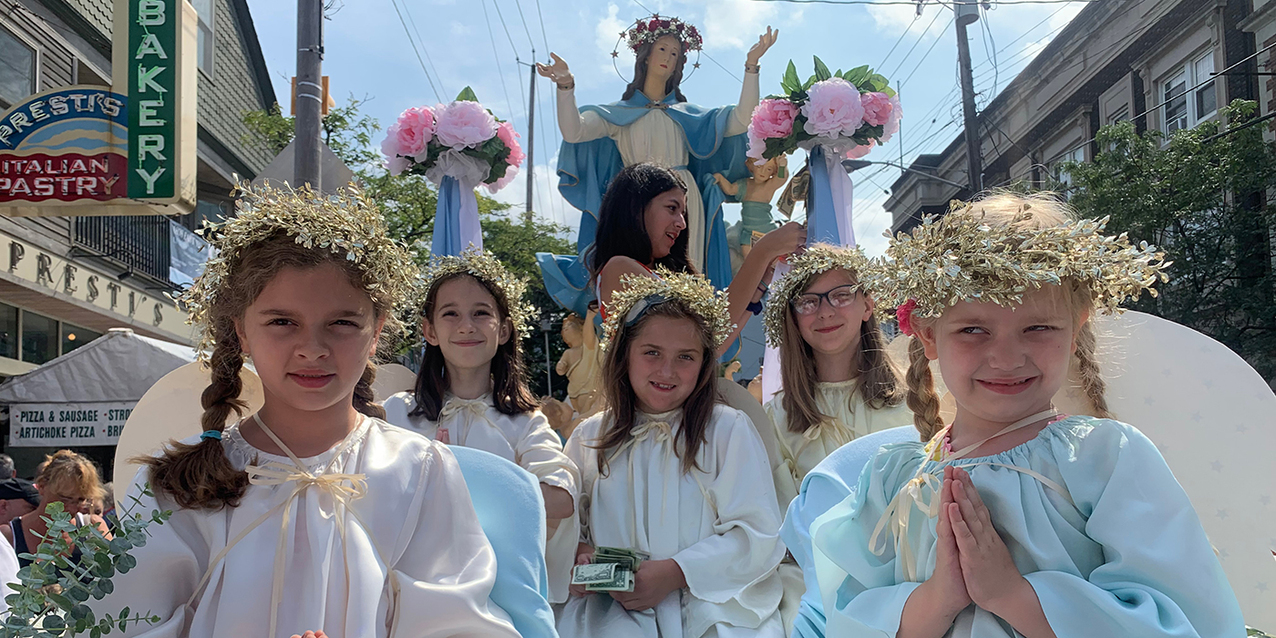 Parts of the Mass were recited in Latin and Deacon Battista proclaimed the Gospel in Italian.

Following the Mass was the traditional procession through the neighborhood, which kicked off the four-day celebration known throughout Greater Cleveland simply as “The Feast.” Father Previte said this is the 121st year for the festival.

Father Mark Latcovich, president/rector of Borromeo and Saint Mary seminaries and one of the concelebrants, was the homilist. 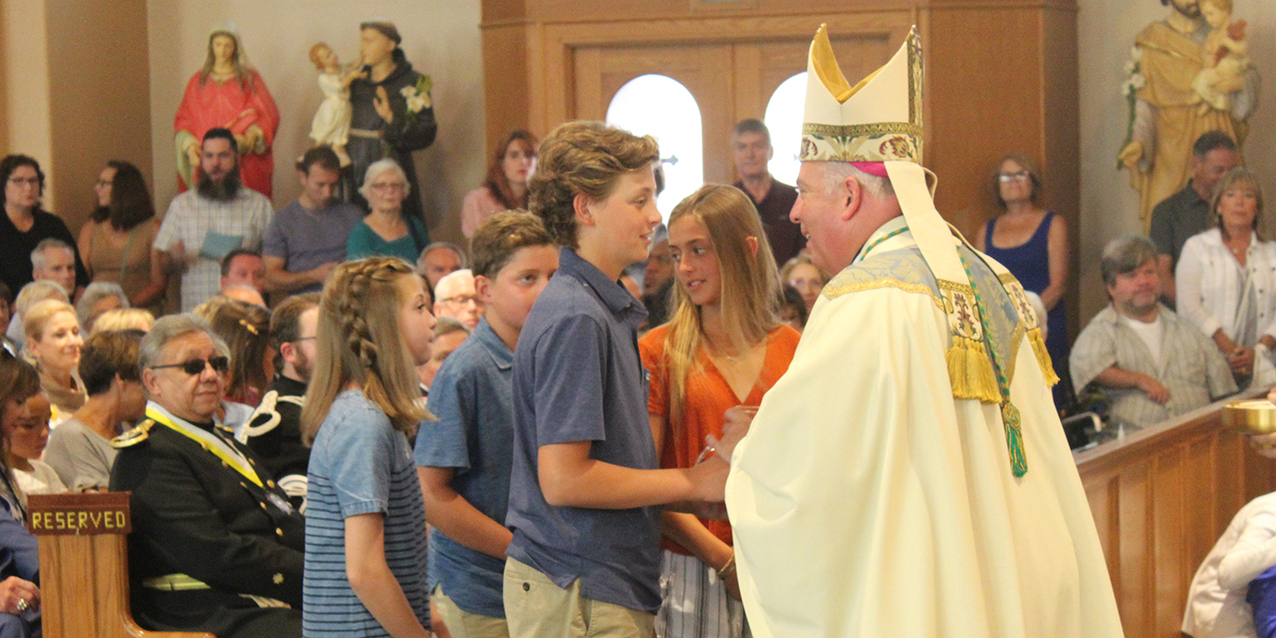 “I’m honored that Father Previte asked me to be the homilist, even though I’m half Croatian and half Polish,” he quipped. Father Latcovich greeted the congregation with a few words in Italian before beginning his homily, which focused on the Blessed Mother.

The Assumption marked the end of Mary’s mission on earth, Father Latcovich said. God had a special bond with her because of her role as Jesus’ mother. He said her first words were a question: “How? Be it done unto me as you say. That began her journey of faith,” he said. 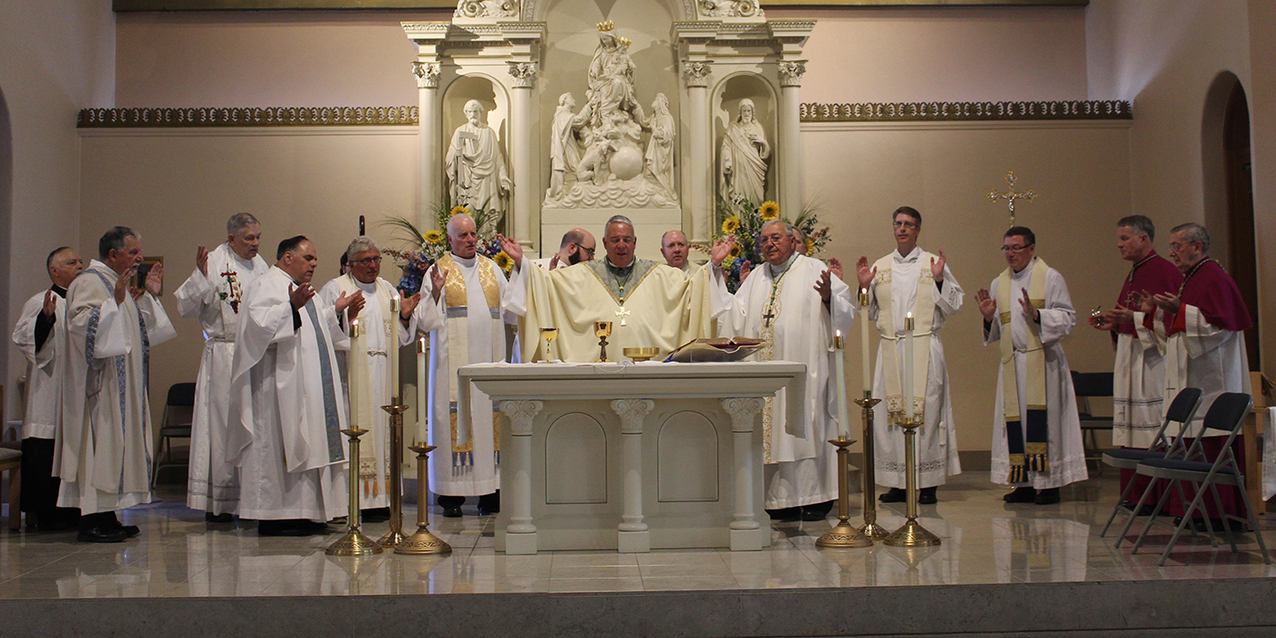 At that point, she didn’t know or understand everything her journey would entail, he said, but she was willing to accept whatever was in store when she said “yes” to God. “That requires faith, courage, hope and surrender. Imagine what it must have been like announcing her ‘special’ pregnancy to Joseph and her family -- and her conversation with Elizabeth. Mary surrendered to God’s plan and her spirit rejoiced,” he said. As a result of her willingness to do God’s will, he had a plan for her – but she had no idea what to expect.

As the years went on and she watched Jesus grow, there were times when her heart was torn apart he said, referring to events like Jesus’ disappearance in the temple, his Passion and Crucifixion. 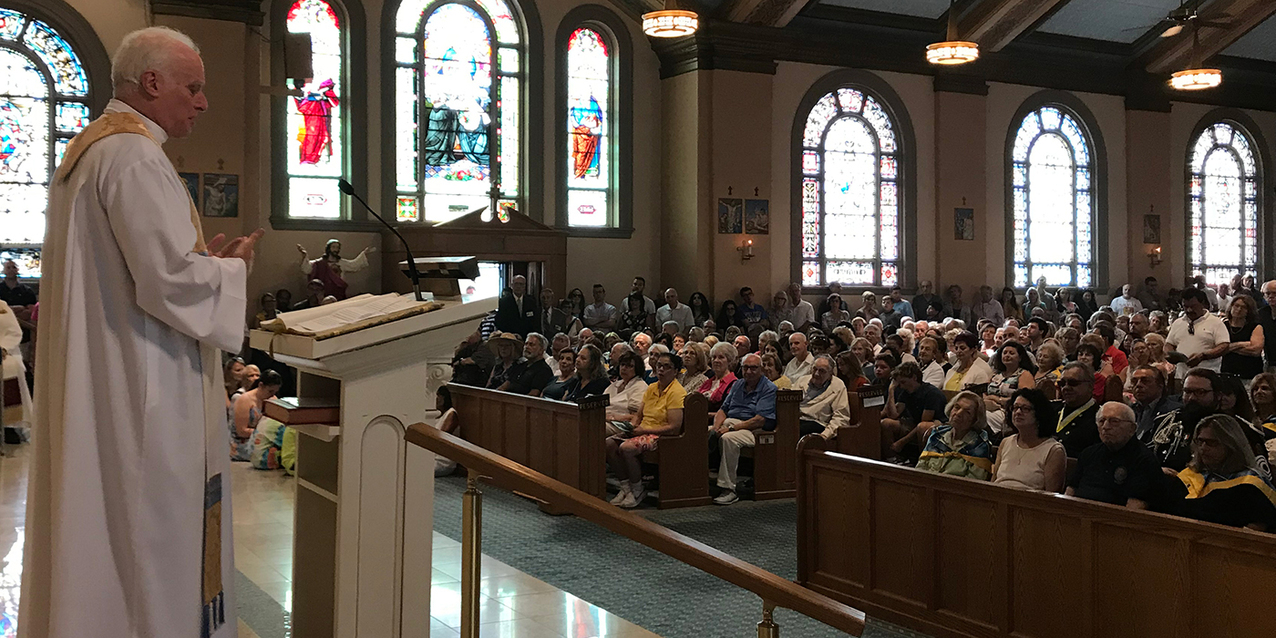 She teaches us that a life we didn’t choose can be filled with uncertainty and suffering, it could be a downfall or it could be filled with moments of grace, Father Latcovich said. As Jesus suffered and died, Mary experienced his pain. But she also received words of hope when from the cross “Jesus told the disciple he loved, ‘behold your mother,’ and said to Mary, “Woman, behold your son.’ She is the mother of the Church – our mother,” he said.

“When Jesus said, ‘Father, into your hands I commend my spirit,’ she surrendered also,” Father Latcovich said. “God’s spirit never left her. She became our mother, our intercessor.”

He said that when Mary died -- in the presence of the apostles -- they wanted to go to her tomb but it was empty because she had been taken to heaven, body and soul, he said. Jesus ascended into heaven himself but it took the power of God for Mary to be assumed into heaven. 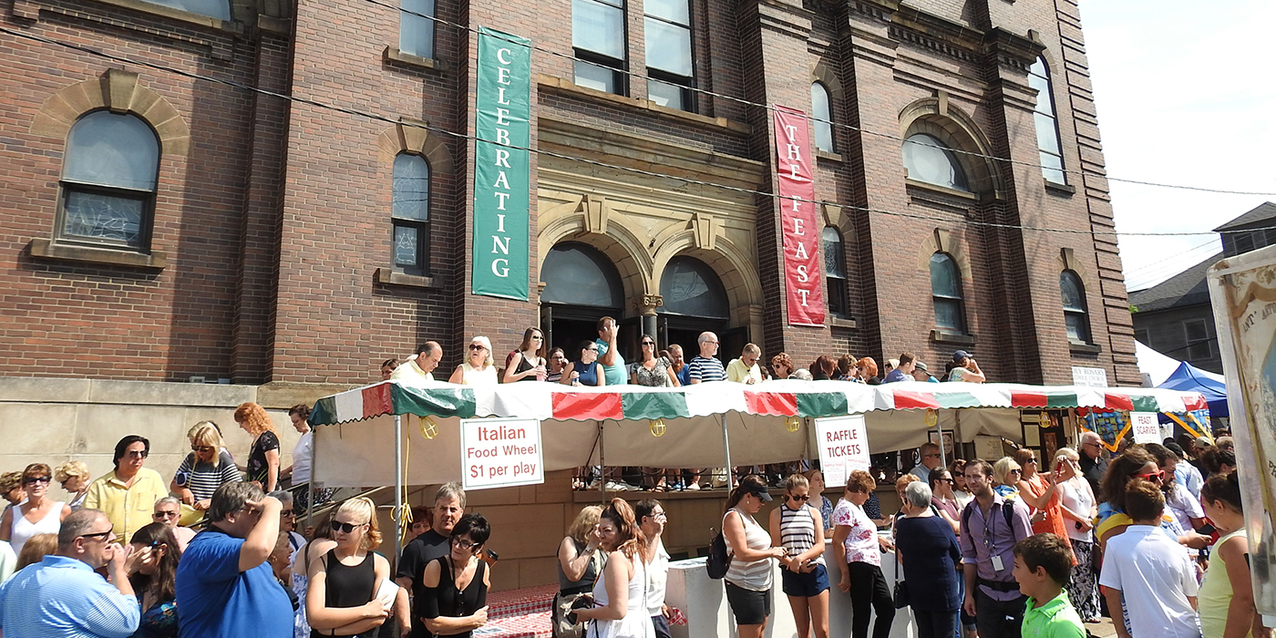 In 1950, the dogma of the Assumption that states that “the Immaculate Mother of God, the ever-virgin Mary, having completed the course of her earthly life, was assumed body and soul into heavenly glory” was issued by Venerable Pope Pius XII.

Father Latcovich said Cardinal John Newman, who will be canonized in October, called Mary “a mystical rose.” He said for centuries we’ve venerated saints, but if anyone deserves veneration it’s Mary. “She’s that mystical, hidden rose through her obedience – in contrast to Eve, the first mother. Mary’s faith, humility and her trust in the Lord makes her that mystical rose because she gave her all to the Lord,” Father Latcovich said. 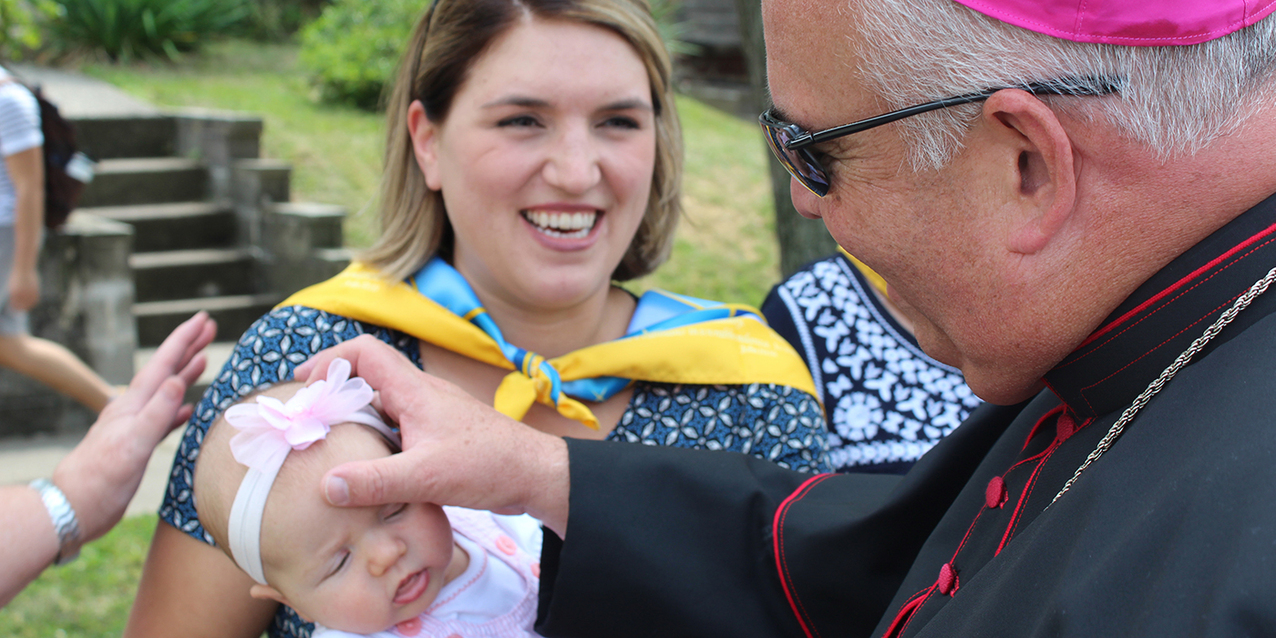 After Mass, Father Previte thanked the bishop, concelebrants, city officials and others who helped make the celebration possible. He also invited all to participate in the approximately two-mile procession through the streets of Little Italy near the church.

Bishop Perez thanked Father Previte for his dedication to the parish and Church. And he acknowledged a longtime Holy Rosary parishioner who is 100 years old and was sitting in the front row with his family. 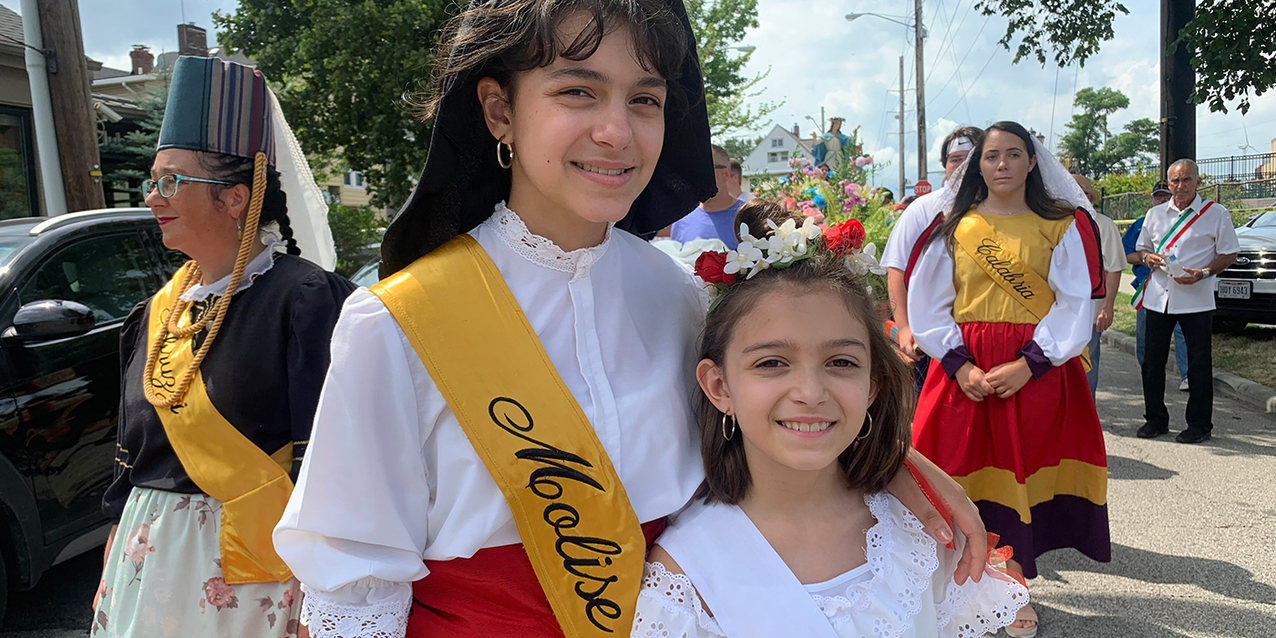 Hundreds of people gathered on Mayfield Road outside the church to watch or participate in the procession. It featured people in native dress from various regions of Italy, members of the clergy, community and parish organizations and others who sang and prayed as they walked. Focal point of the procession was a statue of the Blessed Mother. Donations were collected and attached to the statue. After the procession, the statue was returned to a special shrine area on the side of the church where the faithful can light votive candles and pray throughout the weekend.

The celebration continues through Aug. 18 on the parish grounds and on Mayfield Road near the church. Visitors can purchase religious items, jewelry, special Assumption scarves, books, holy cards and other items, as well as bakery and food. Festivities also include live music, rides and games in the church parking lot. Many of the restaurants and businesses in the area are offering specials.

Watch video from the procession with Bishops Perez and Broglio.