Principals, high school presidents, Newman campus ministers, youth ministers and parish catechetical leaders spent the morning of Aug. 16 attending Mass, hearing an address from a national religion consultant, sharing information at breakout sessions and learning more about The Culture Project, which is coming to the Catholic Diocese of Cleveland in October. 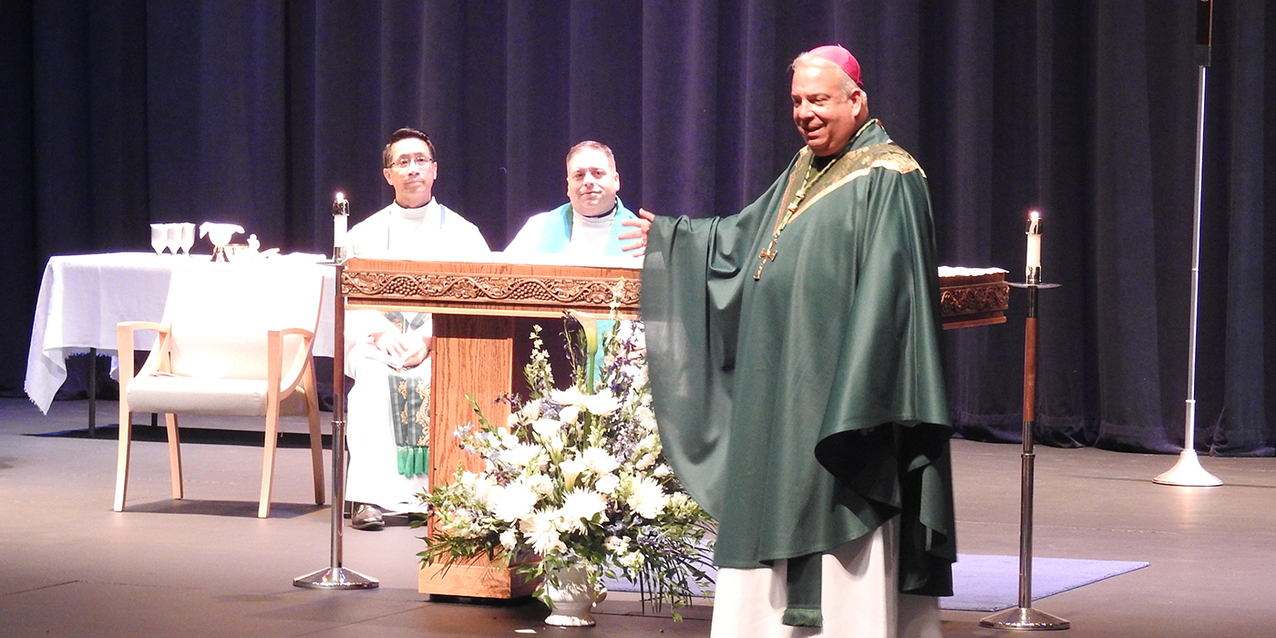 “God is good,” the bishop said. “All the time, the audience responded. “And all the time, God is good. Welcome to another year of possibilities,” he said.

The bishop told the educators that life is full of surprises. “Some of those surprises are pregnant with grace,” he added.

“Stages are everywhere,” he told the audience. “Your classroom is a stage. This stage,

he said, pointing to the performing arts center stage, “can be used for theater, drama, performances. Today it’s being used for theology.”

He told the story of celebrating Masses on Pentecost weekend seven years ago at the parish where he was pastor in suburban Philadelphia. Soon after, he got a call that his mother was ill so he rushed to be with her. A few days later, he got an unexpected call telling him that the Holy Father had named him a bishop. That meant leaving behind all that was familiar and moving someplace where he knew no one. 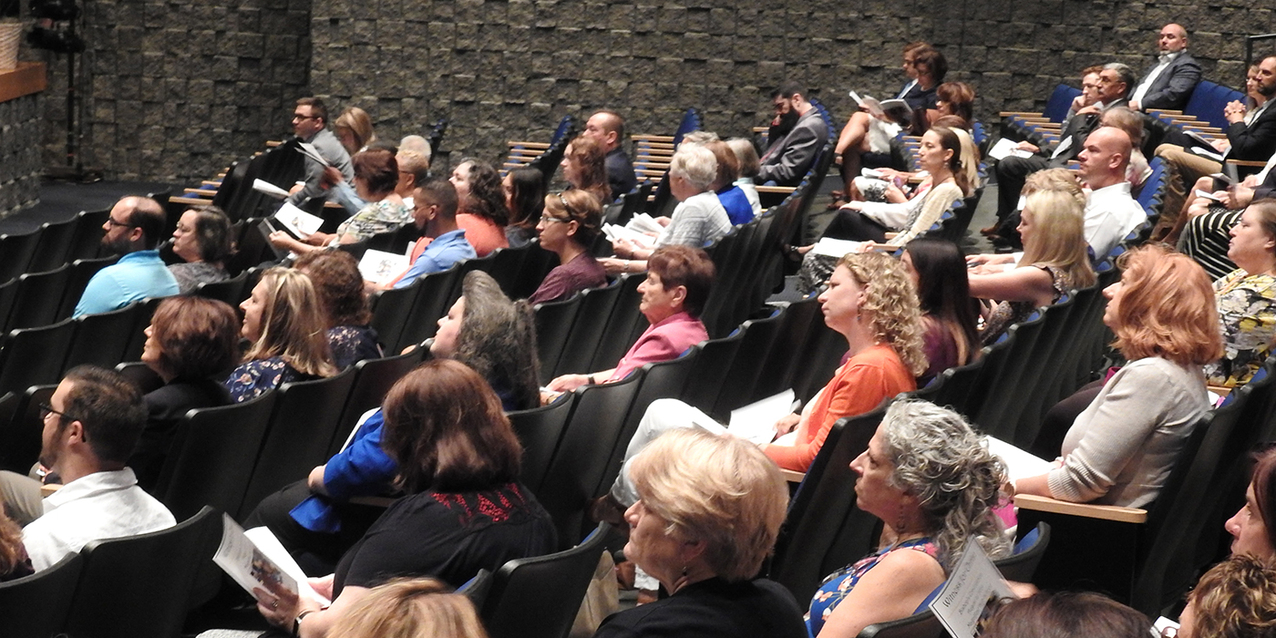 “Drama was unfolding,” he said, adding, “some things don’t unfold according to the lesson plan. You teachers would understand that.”

He said as Christians, we have been witnesses through generations to the fact that Jesus Christ died and saved us by rising from the dead. When Christianity began 2,000 years ago, the bishop said there were people with a passion for proclaiming the message of how Christ died and rose for us. “That ‘surprise’ happened 2,000 years ago. The fact that a dead man rose gives us real hope for the future, he said.

A year ago, the top leaders in the diocesan education department left within a short period of time, bringing a period of change. The bishop said he understood what was happening because people come and go and for various reasons, people decided to move on and accept other opportunities.

But it opened the door for change, he said, noting that Frank O’Linn stepped in as acting superintendent. “He acted, did well and he got the part,” Bishop Perez quipped. O’Linn was named secretary of education and superintendent of schools earlier this year. 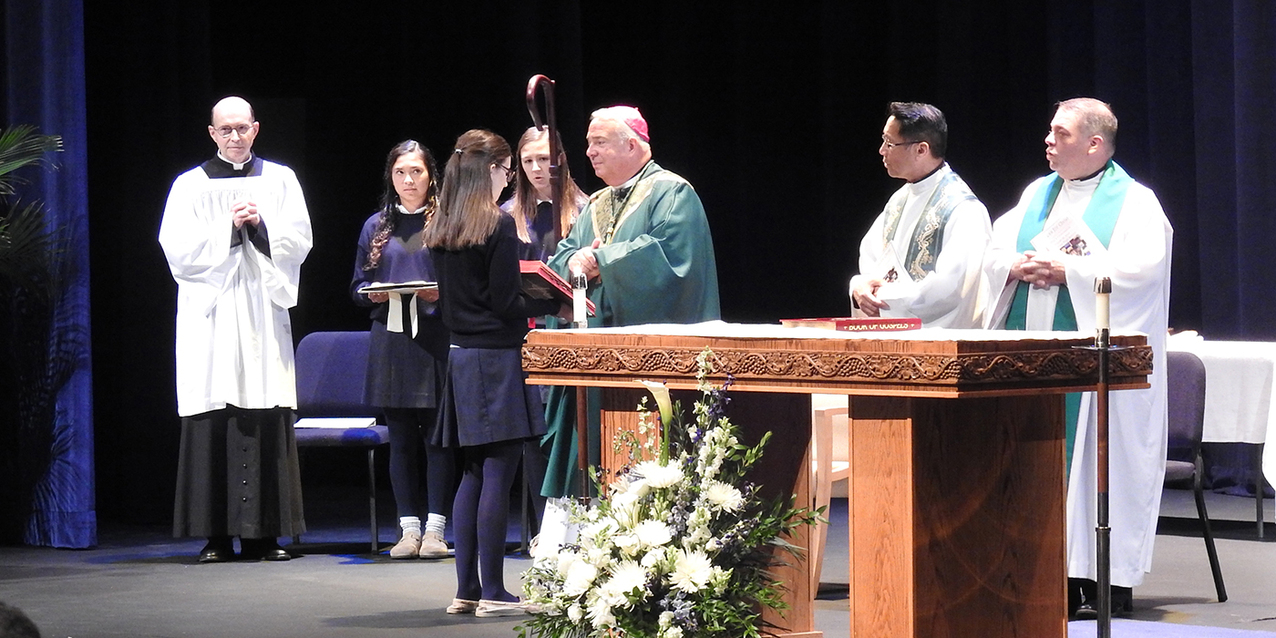 “The campus ministry was held together by one man and now we have Father Vince Hawk, Joann (Piotrkowski) and seven campus ministers. We’re also interviewing some very good candidates for the catechetical leadership position,” he added.

The world is a complex place, the bishop said, with a creative tension between the church and the rest of the world. He talked about societal changes over the past few decades and how a court decision allowing abortion impacted the beginning of life. “Then we redefined marriage. We don’t have the right to change that truth because it wasn’t our truth to begin with,” he said.

The Culture Project will be coming to the diocese in October – at his invitation, the bishop said. The missionaries from that ministry proclaim the dignity of the human person – the truth as God proclaimed it.

He told the educators they should be open to the surprises that God has in store for them. “Many of these surprises are pregnant. Allow them to speak to you, to change you and to make you grow. Be open to the word,” he said. 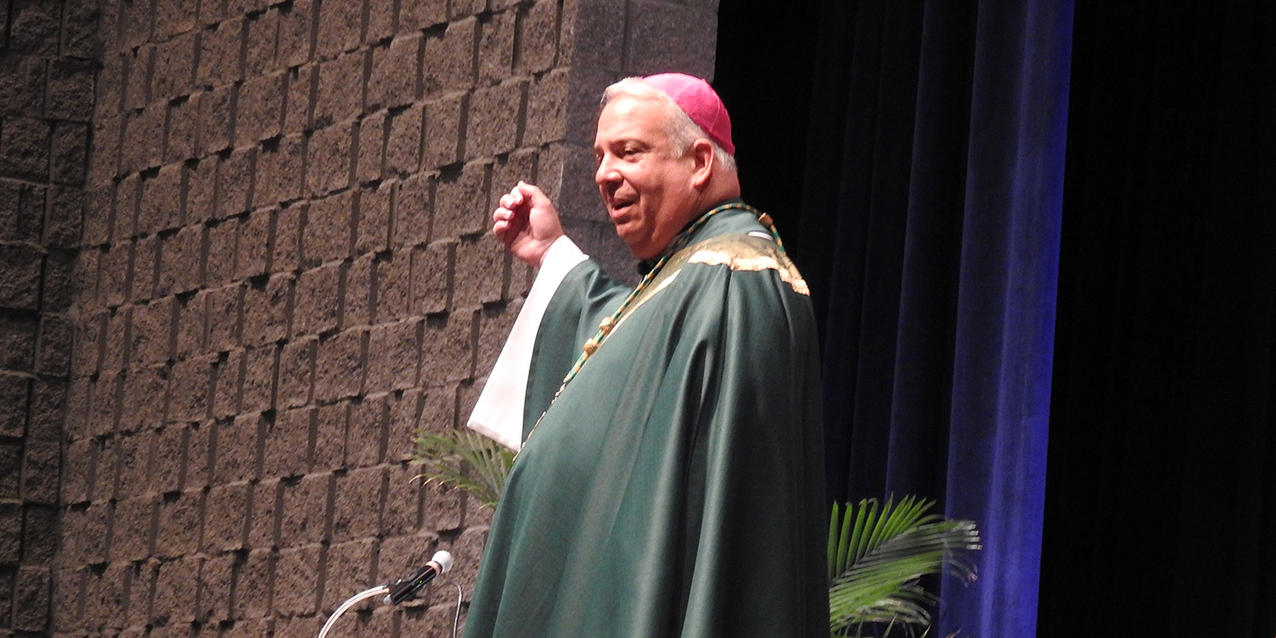 Bishop Perez said it’s worth remembering what St. Francis de Sales said. “If you go before the Lord to pray and you can’t, just go and let yourself be seen – particularly before the Blessed Sacrament.” He said there is a chapel near his office and he frequently pops in and out. “I can’t stay for hours because my schedule won’t allow it. But I go in often – just for a little while – and it’s refreshing.”

Attendees viewed a brief video about The Culture Project and had the opportunity to meet and speak with a representative. TCP is available – at no charge to parishes, schools, youth and other groups – to speak and make presentations. For more information or to inquire about a presentation, pastors and principals can visit dioceseofcleveland.org/cultureproject.

The keynote speaker, Carole Eipers, is a national religion consultant for Wm H. Sadlier and the pastoral associate at Queen of All Saints Parish in Chicago. She also served in parish ministries for more than 25 years as a teacher, director of religious education, youth minister and pastoral associate. In addition, she was director of the office of catechesis for the Archdiocese of Chicago for nine years and served as president of the National Conference of Catechetical Leadership.

Eipers was an adjunct faculty member at Mundelein Seminary, Loyola University Chicago, Loyola University New Orleans and the Catholic Theological Union in Chicago. She has presented nationally and internationally on evangelization, catechesis, and leadership and has led retreats and professional days for a variety of groups. Her latest books are “Wade Don’t Dive: Giving New and Seasoned Catechists Confidence”, “Pep Talks for Catholic School Teachers” and “Who Me, Evangelize?” 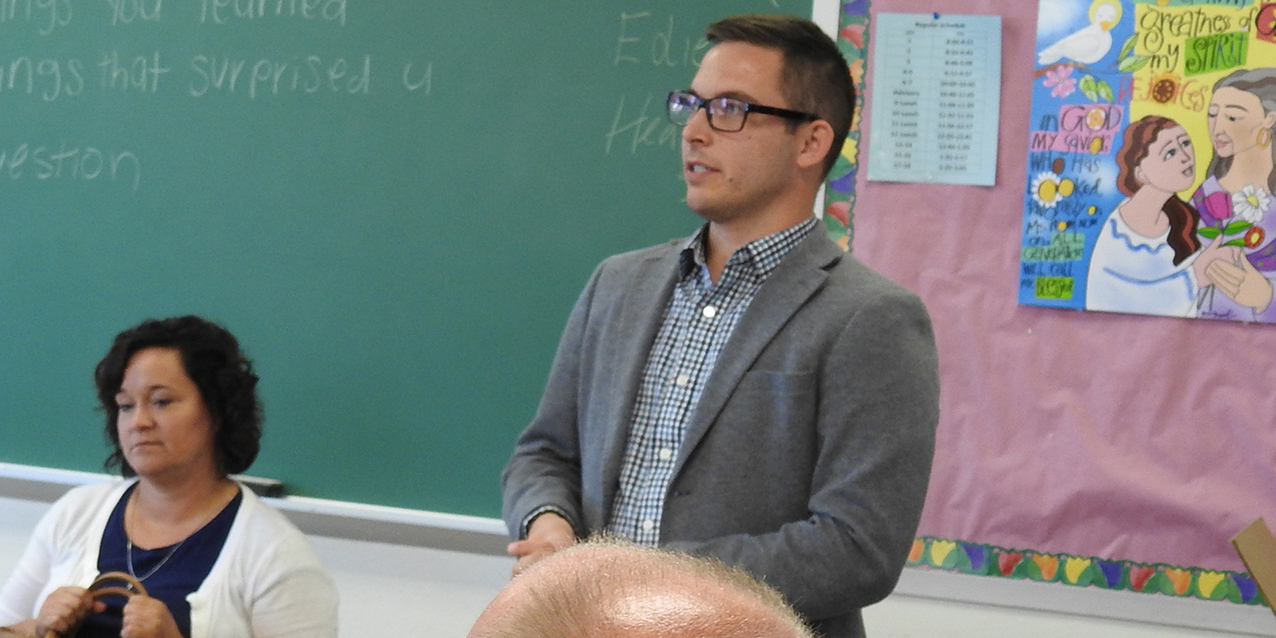 Eipers’ talk focused on witnessing. She reminded the audience to “remember who we’re witnessing for.”

“I think instead of a frilly dress, you should wear overalls for baptism because they say you have work to do,” she said, as she removed her blazer and revealed a pair of white painter’s overalls. She engaged the audience with a story from her childhood about how she’d take a young, non-Catholic friend into a dark closet and reveal her glow-in-the-dark Infant of Prague statue with the message that Jesus was trying to convince him to become Catholic.

Eipers talked about using the word witness as a verb and referred to the mission statement on the diocesan website. This is a Church on mission, she added, showing Bishop Perez’s web page where he encourages people to be proactive, involved, supportive, fruitful and joyful,” according to Pope Francis’ apostolic exhortation “The Joy of the Gospel.”

She said we need to know our story, which tells people about us. But sometimes stories can be difficult to work through. Proclaiming a message and making a connection to life are the keys. 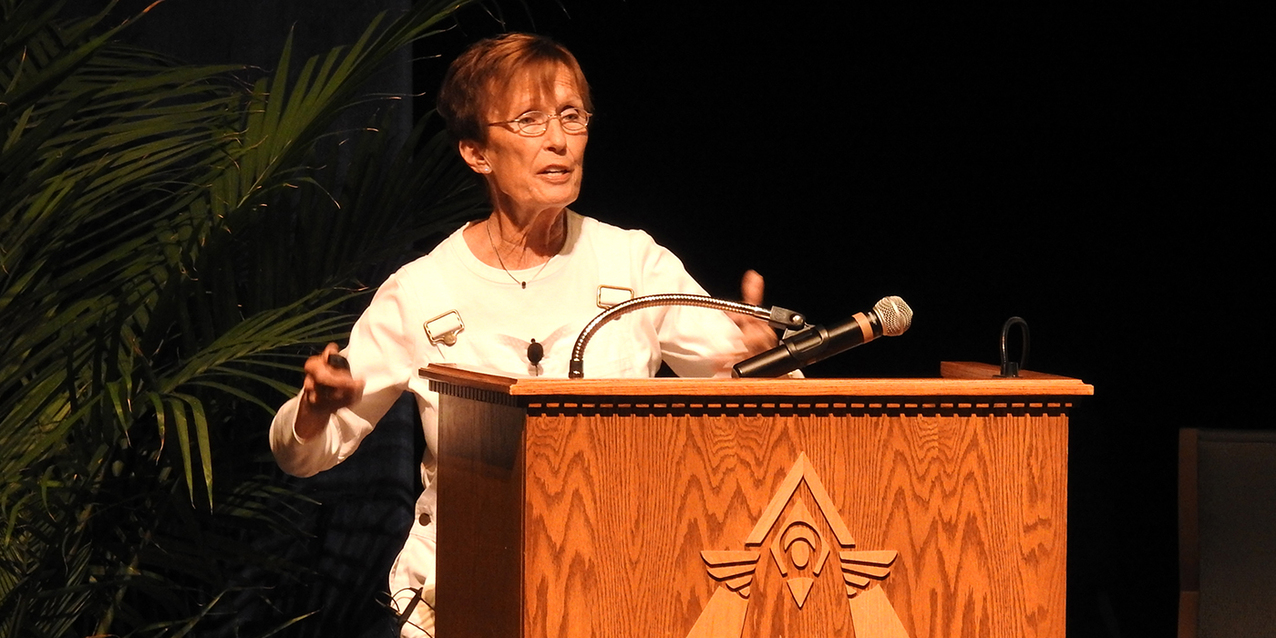 Eipers talked about qualities that can help us be proactive witnesses for Christ: encounter, accompany, community and send.

Encounter involves listening to the stories of others and asking what story they need to hear. “A simple relationship with God is the greatest gift,” she said.

Accompany means going as a companion with someone, walking by faith and not by sight.

Community means sharing truths. For example, morality means there are “nos” that flow from the dignity that God gave each person. Also, she said that prayer is a gift that teaches us we are never alone. 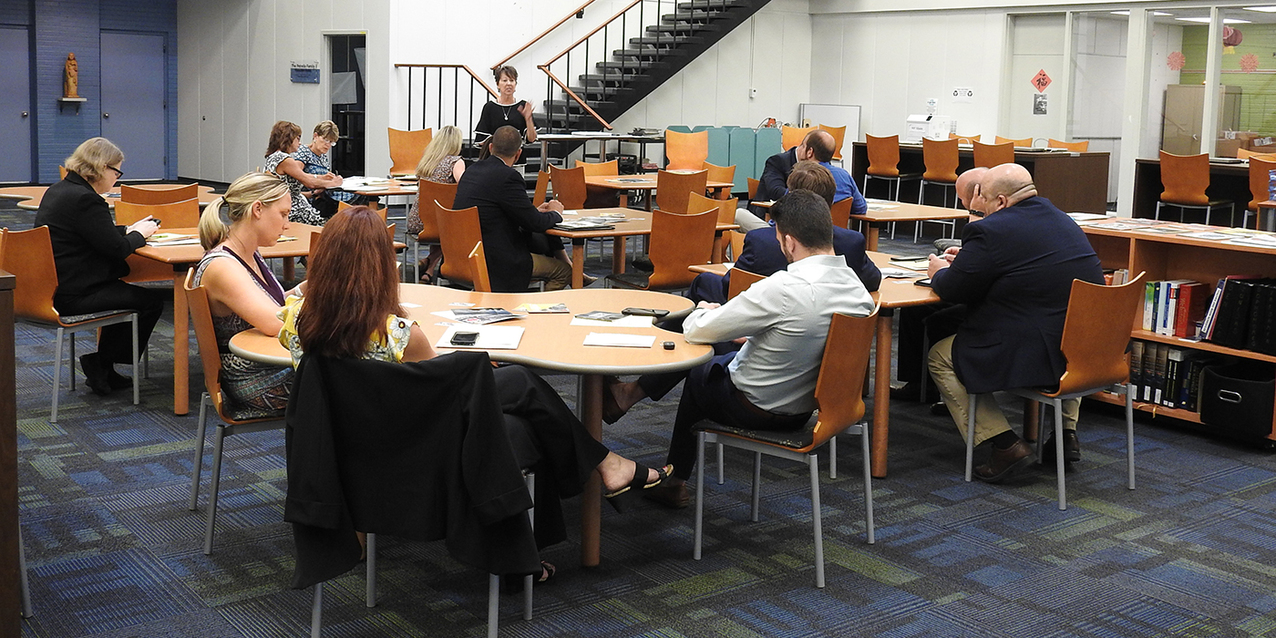 Send is what we do to help spread the word, but this means those who are leading need to step back and remember who taught them the faith when they were the age of those they serve.

“Joy is a fruit of the Holy Spirit and God wants fruitful spirits, not religious nuts,” Eipers quipped.

She encouraged teachers, ministers and others to see the needs around them and craft their own responses to those needs. Instead of adults or youths working separately on projects, she said they should work together.

Also, she suggested looking at circles of service, beginning with your family and expanding the circles to widen the scope. 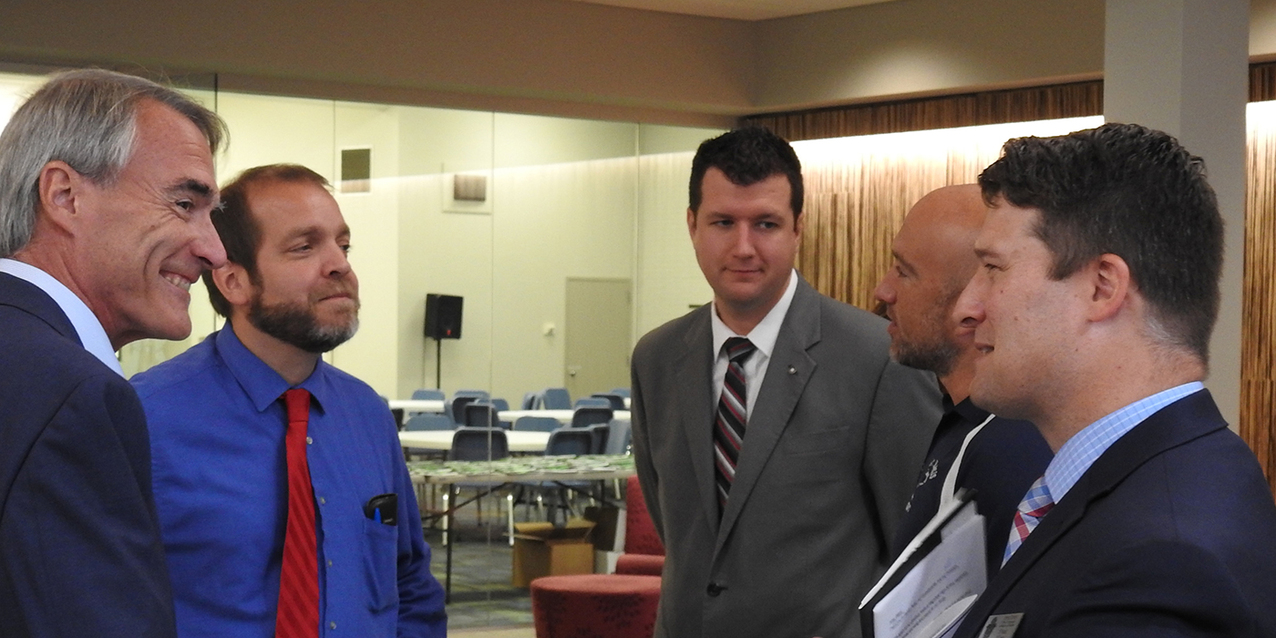 “And get a pair of rose-colored glasses because I think that’s what God uses when he looks at us,” she quipped.

“Today we begin a new chapter. It won’t be perfect, but there’s a crack in everything. That’s how the light gets in. By your witness, you reveal who Jesus is and his dream for the kingdom. Keep forming those who listen and share the stories. Encourage them to serve generously so they can be – as you are – a light for our world,” she said.