James Smith, campus president and former St. Adalbert principal, proudly pointed to the new building during a blessing ceremony and ribbon-cutting on Aug. 20. The 13,000-square-foot, facility houses pupils from pre-kindergarten through second grade. Students in grades 3-8 attend classes in other buildings on the campus. School enrollment has doubled to more than 400 students in recent years, Smith said. Enrollment for the 2019-2020 school year is 478. 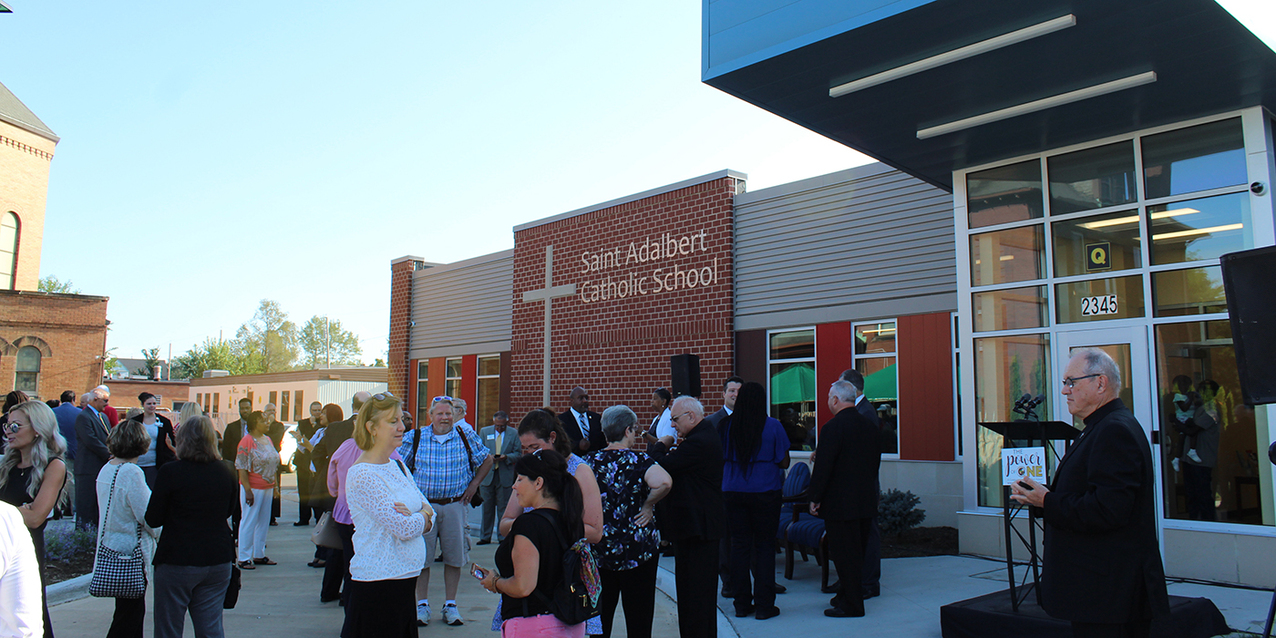 “St. Adalbert is the oldest African-American parish in the state and the second-oldest in the country, Smith said. “We celebrate that history and how God smiled on us.”

St. Adalbert School was established in 1890 as a parish school to serve the Bohemian community in Fairfax. The Sisters of Notre Dame operated the school for 56 years until changing demographics forced its closure in 1946. 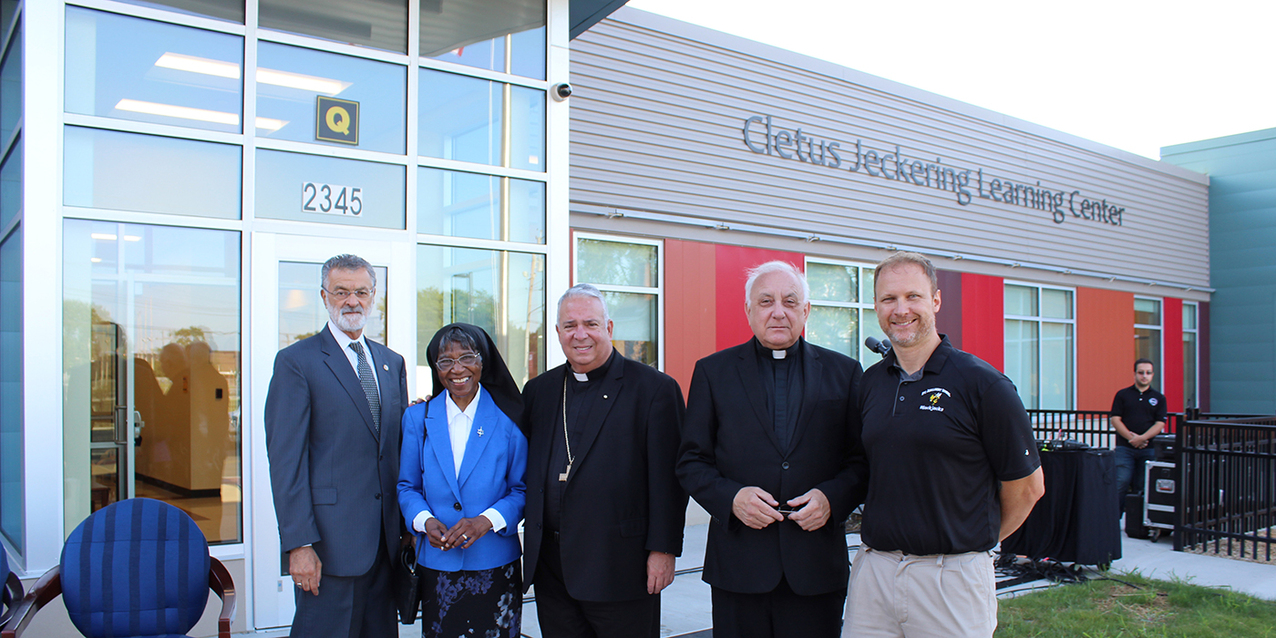 By 1961, Our Lady of the Blessed Sacrament Parish, which was located nearby on East 79thStreet and was the first and only African-American parish in the Catholic Diocese of Cleveland, had outgrown its church and school buildings. It merged with St. Adalbert with the understanding that Blessed Sacrament parishioners would build a new school adjacent to the church. The Sisters of the Blessed Sacrament, who had served at that parish since 1924, agreed to continue serving at the new location. In 1962, St. Adalbert School reopened. It serves students from across Cuyahoga County, with many students the children, grandchildren and even great-grandchildren of alumni.

Father Gary Chmura, pastor of St. Adalbert and Our Lady of Peace parishes, assisted Bishop Nelson Perez as he blessed the new building. A group of second-graders, dressed in uniform, lined up in front of the bishop and Father Chmura during the ceremony. 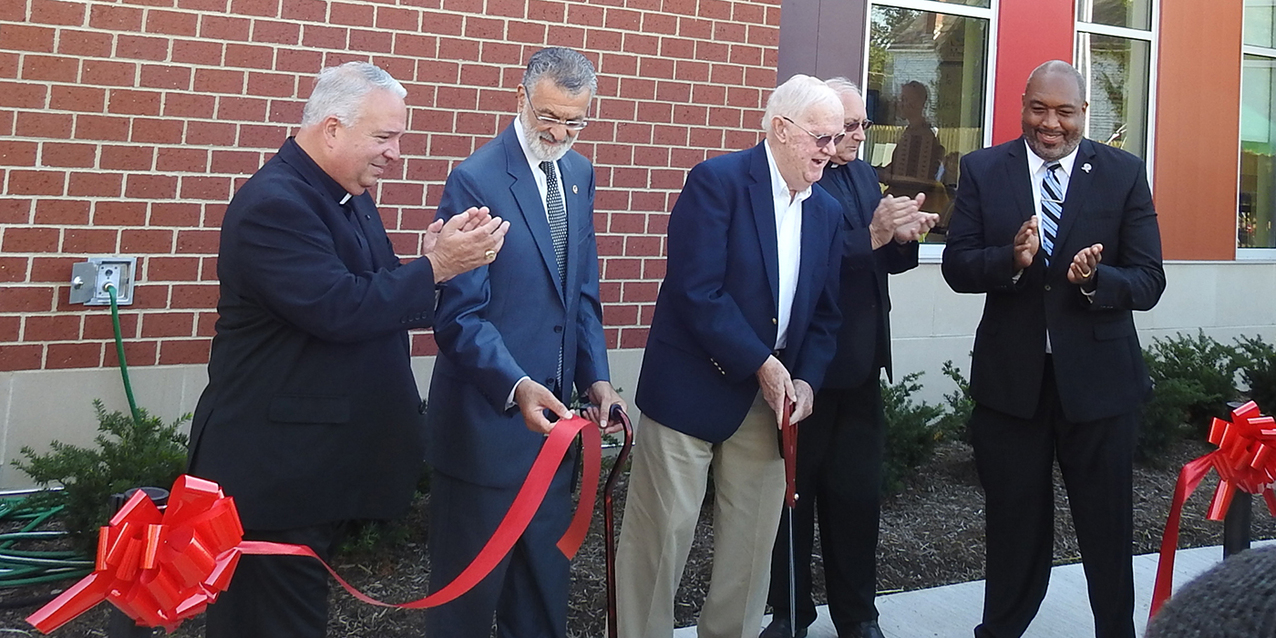 The Jeckering family, longtime supporters of St. Adalbert School, were credited with spearheading the $5 million project, which was part of a $7 million The Power of One campaign. The new building includes nine classrooms, a cafeteria designed for the younger children and an outdoor play area with green space. Furniture is scaled for young children and the walls and floors are decorated with splashes of bright colors.

“Thanks to the Jeckering family and the Catholic Diocese of Cleveland for investing here in Fairfax,” said Cleveland Mayor Frank Jackson. “Education is the key to the students’, their families’, the community’s and the city’s success.”

“This is not just a building,” said Bishop Perez. “You can see the joy in the children’s eyes and in them.” He thanked Sister Juanita Shealey, CSJ, who grew up in the neighborhood and attended Blessed Sacrament School, for retaining her connection to the neighborhood and inviting the Jeckering family to become involved. 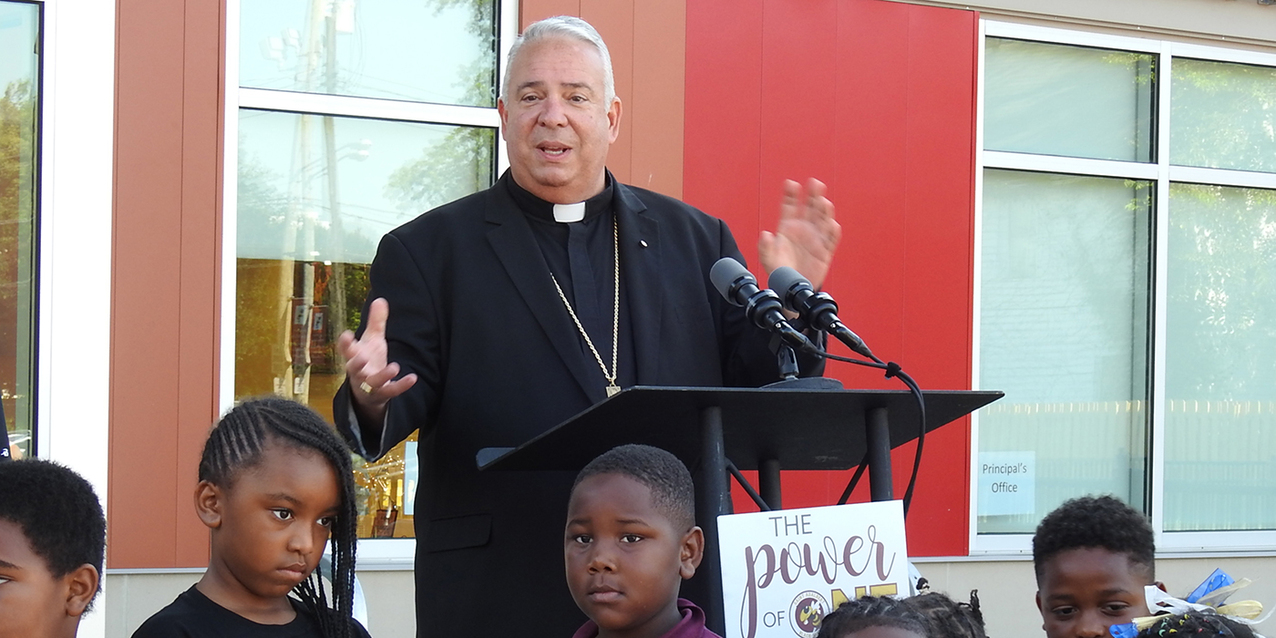 Sister Juanita, in turn, thanked the Sisters of the Blessed Sacrament and the Precious Blood priests and brothers who served the parish for many years for their contributions. She also noted the deep roots many families have in the school and parish community.

“This is the generation that will get it right,” Sister said, gesturing to the second-graders.

Smith said the celebration was not about the building. “It’s about what goes on inside and we wanted the students to be a part of it.”

Tom Jeckering, family patriarch, said the building is named in honor of his late father, Cletus, who died at age 93 in 1995. “He had simple priorities: his faith was first, then his country, then family and friends and then his job.” Jeckering said his parents’ first child was born with a brain hemorrhage and lived to be 6 years old. The medical bills exceeded their annual income, he said. 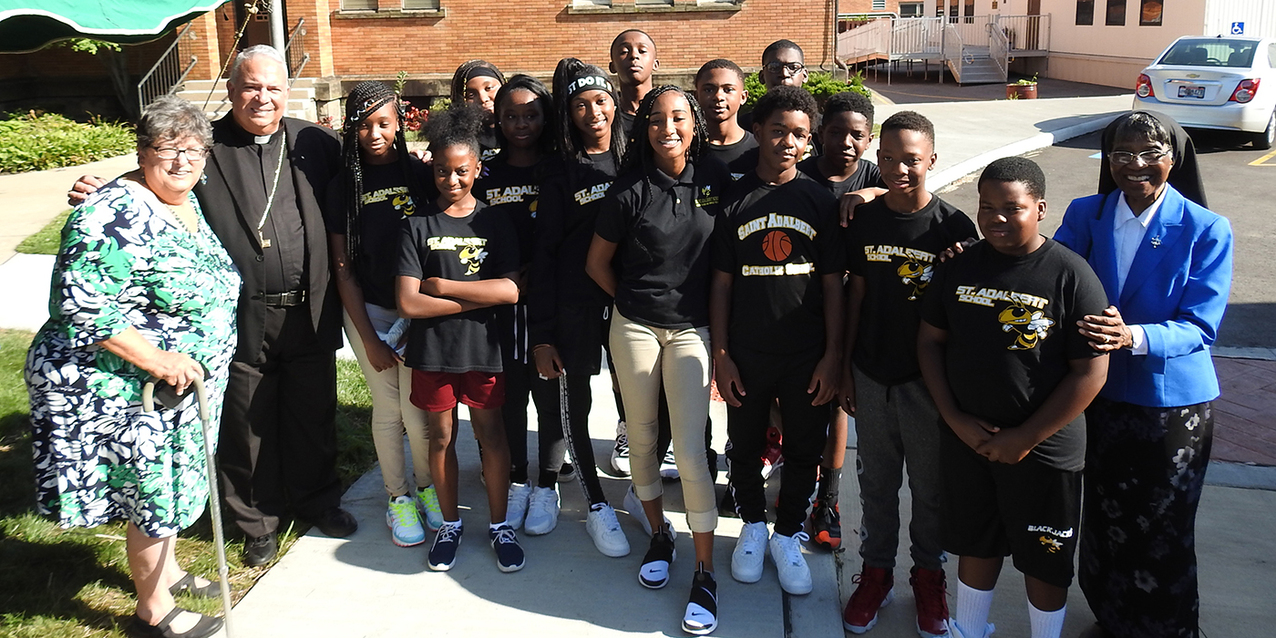 As a testament to his father’s work ethic, Jeckering recalled how he worked double shifts – 80 hours per week – at his food wholesale company throughout World War II. He built the company from nothing to a $100 million per year operation.

“And he received Communion six days a week,” Jeckering said, illustrating the importance of faith to his father.

“He believed that charity should be private. Dad was a good and holy man and I think it’s appropriate to put his name on this building,” he added. Jeckering and his wife, Virginia, were joined by their son, Scott, and other family members at the ribbon-cutting and blessing. 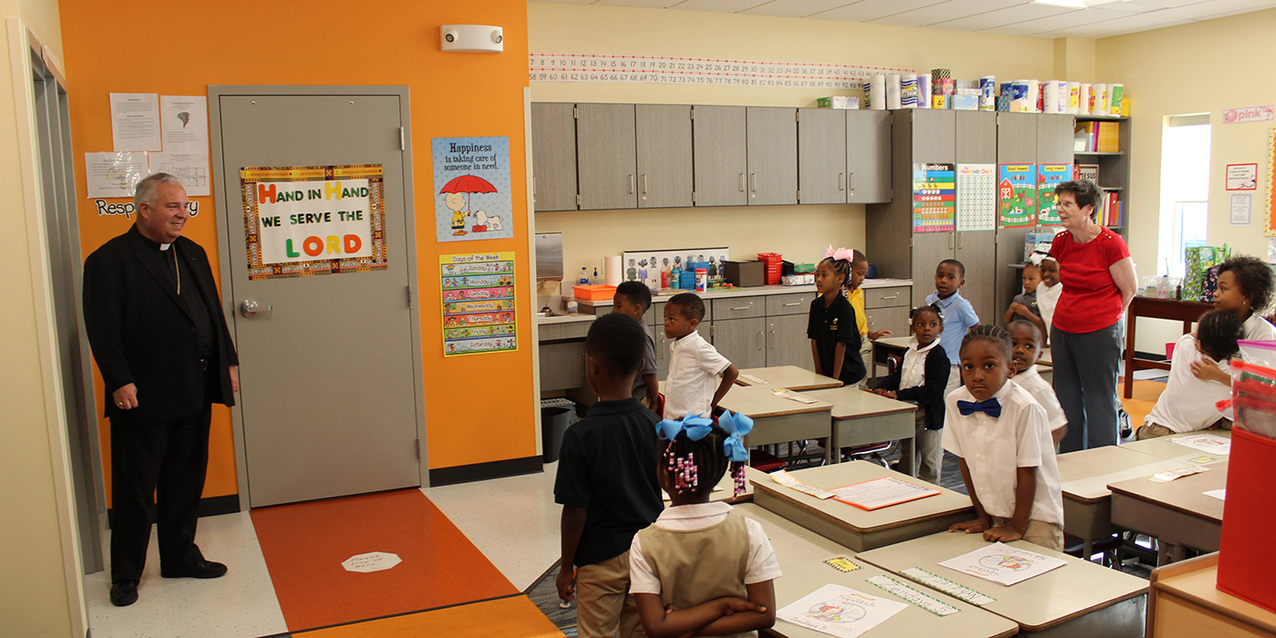 “Without the grace of God and the kindness of many in the community, this wouldn’t be happening,” Smith added.

After the blessing and ribbon-cutting, the bishop and guests visited the new building and enjoyed a reception. 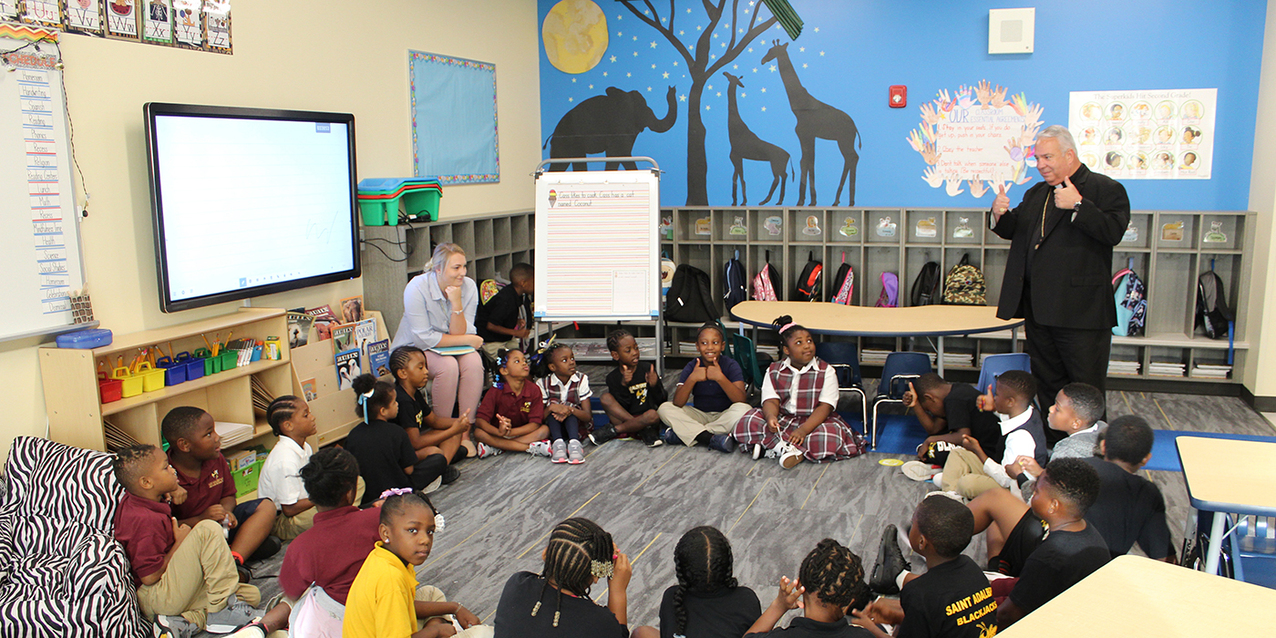 For more information on the Power of One campaign, click HERE.