“This has to be the most beautiful day of the summer,” Bishop Nelson Perez said as he prepared to celebrate Mass at St. Matthew Parish in Akron on Aug. 25. “We need to give thanks to God for this day.”

A large crowd filled the front lawn of the school for the parish’s annual outdoor Mass and picnic. This year’s events were among those planned to wrap up the yearlong celebration of the 75th anniversary of the parish, which was established on Aug. 18, 1943 by Archbishop Edward Hoban. 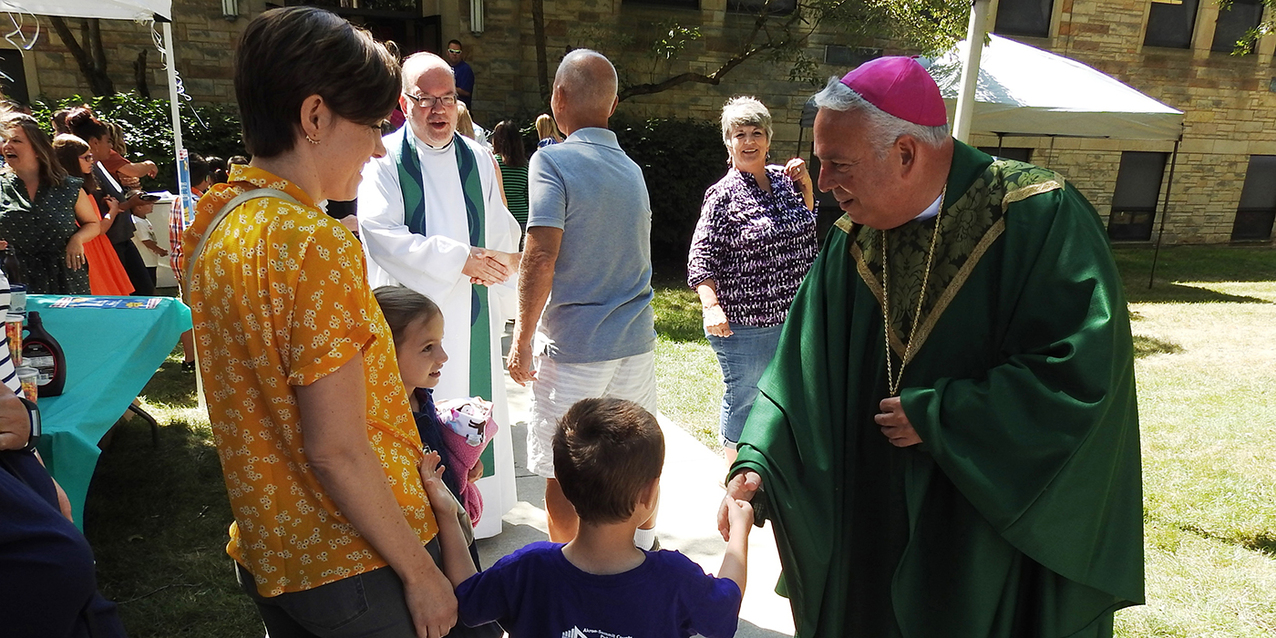 “Were any of you here 75 years ago?” the bishop asked. “None of this existed back then – except for one thing: God.”

He acknowledged some members of the extended Reymann family who were in attendance at the Mass. The late Charles and Salome Reymann donated about 2 ½ acres of land to the parish. Over the years, a church, school, convent and rectory were among the structures erected on the land.

But a parish is more than a church, school or other buildings, the bishop said. He shared some of Pope Francis’ thoughts, explaining that a parish is the presence of the Church in the midst of the homes of her sons and daughters. “This parish is also a sanctuary – a place where people can stop for refreshment on their faith journey,” Bishop Perez said. 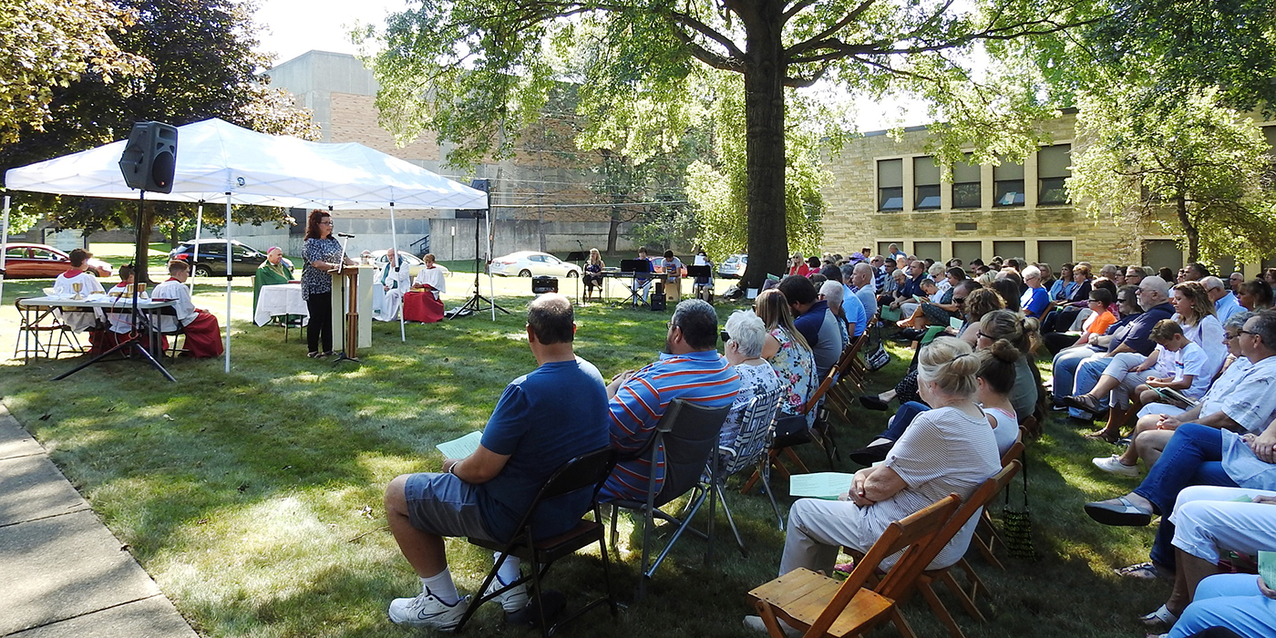 In the Gospel, he explained that Jesus was on a journey – on his way to Jerusalem. “We all are on the way. We look different at different times, he said, pointing out that our appearance changes over the years. Seventy-five years ago, the people who established St. Matthew’s were different. Those who are still around may be near the end of their journey and others have gone to their final destination.

He talked about how things have changed over the years – how we all must learn to adapt and change.

“The ultimate reason that we’re here is to be nourished and sustained by the presence of Christ in the Eucharist. That is the most important thing you do – gather and celebrate the Eucharist,” he said. 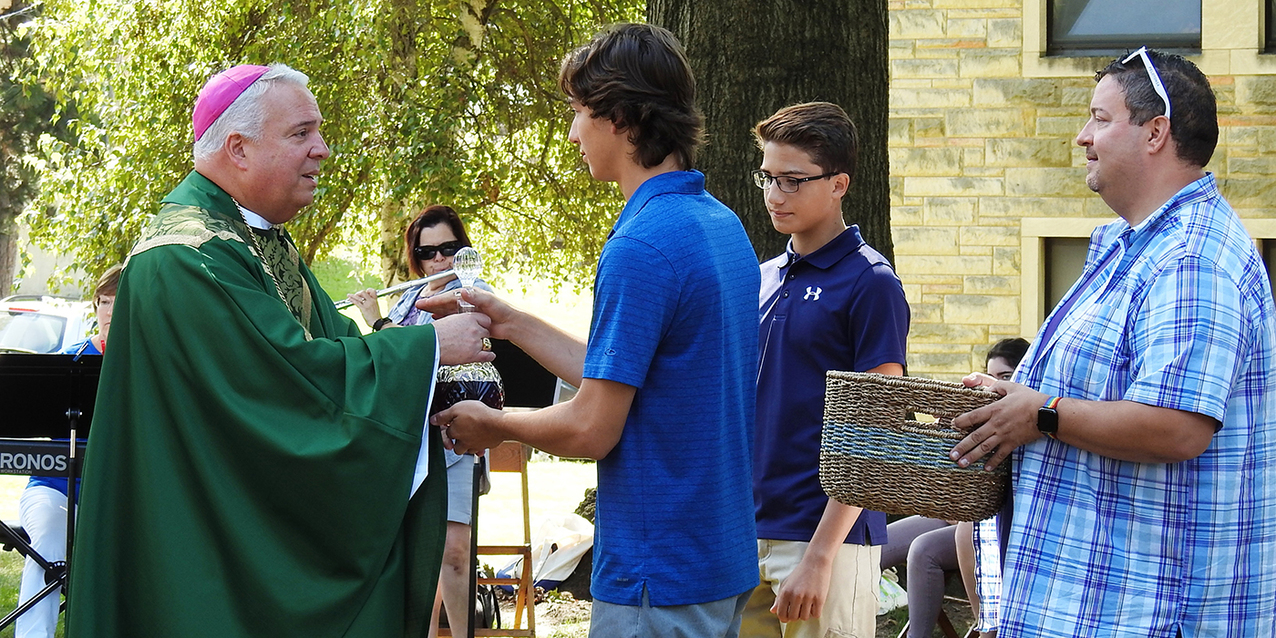 Before the church was built, St. Matthew parishioners gathered at nearby Ellet High School where Mass was celebrated in the auditorium. He said those parishioners worked hard and sacrificed in order to build up the parish and to hand it on. “It was a gift that they handed on to you. As you celebrate 75 years of community and parish life, take time to look back with gratitude. And remember that everything you have is a gift. Even your life was a gift from God,” the bishop said.

“Seventy-five years from now, a different group of people will be here,” he noted, adding that he’s in his third diocese since ordination. “We all come and go – priests and people. Many stay a long time, but eventually they go.”

“Look back and thank God for your gifts but also look forward and know that in 75 more years, people will give thanks for what you’ve given them,” the bishop said. 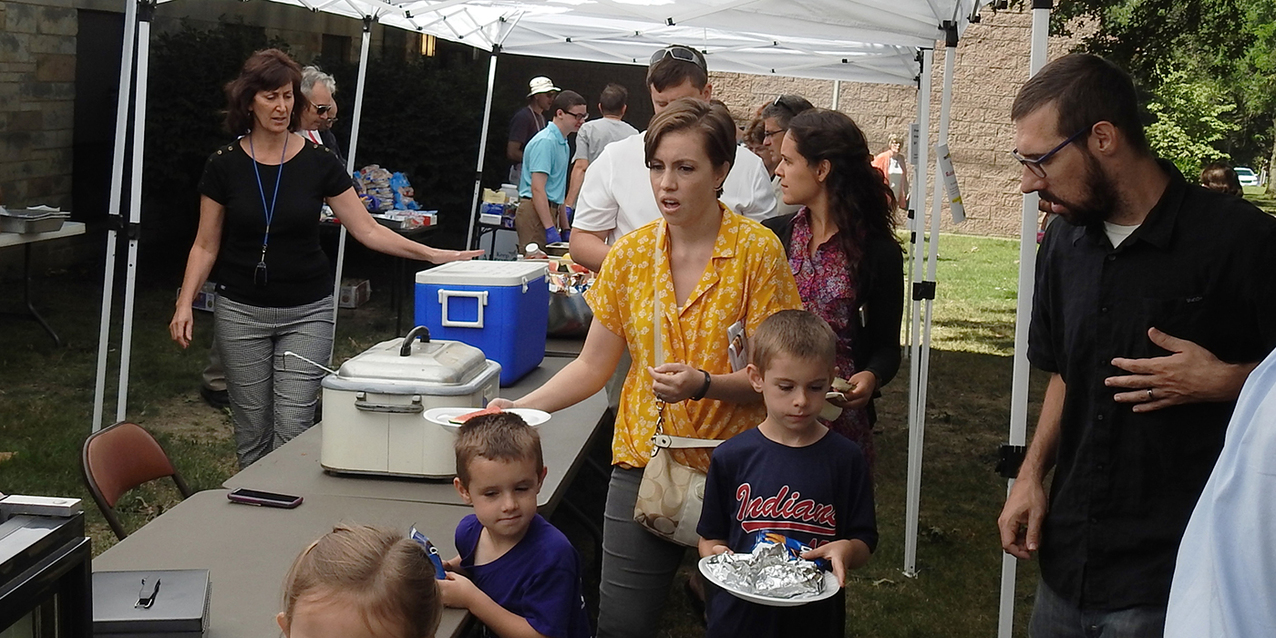 After Mass, parishioners spent the afternoon enjoying fellowship, games and food during the parish picnic.

There also was an open house at the parish school. Principal John Czaplicki and teachers greeted students, parents and other visitors who toured the building. Classes begin on Aug. 27.

St. Matthew’s was the 17th parish established in Akron. The church was completed in the fall of 1946 and the first Mass was celebrated in the church on Nov. 11, 1946. The school opened on Sept. 7, 1949. A convent was built and there was an addition to the school in 1956. The rectory was completed in 1960 and a social hall, named the Father Silva Center in honor of the parish’s fourth pastor, was built in 1980.