Human trafficking is a very real problem around the world and in our own city, said Notre Dame Sister Cecelia Liberatore when she addressed the First Friday Club of Cleveland on Aug. 29 at The City Club in downtown Cleveland. The topic of her presentation was “Human Trafficking: Human Tragedy, Human Hope.”

She was introduced by Helena Piller, a human trafficking survivor, client and volunteer at the Renee Jones Empowerment Center in Cleveland. Piller described Sister as “a prophet among us. She accompanies us,” Piller added. 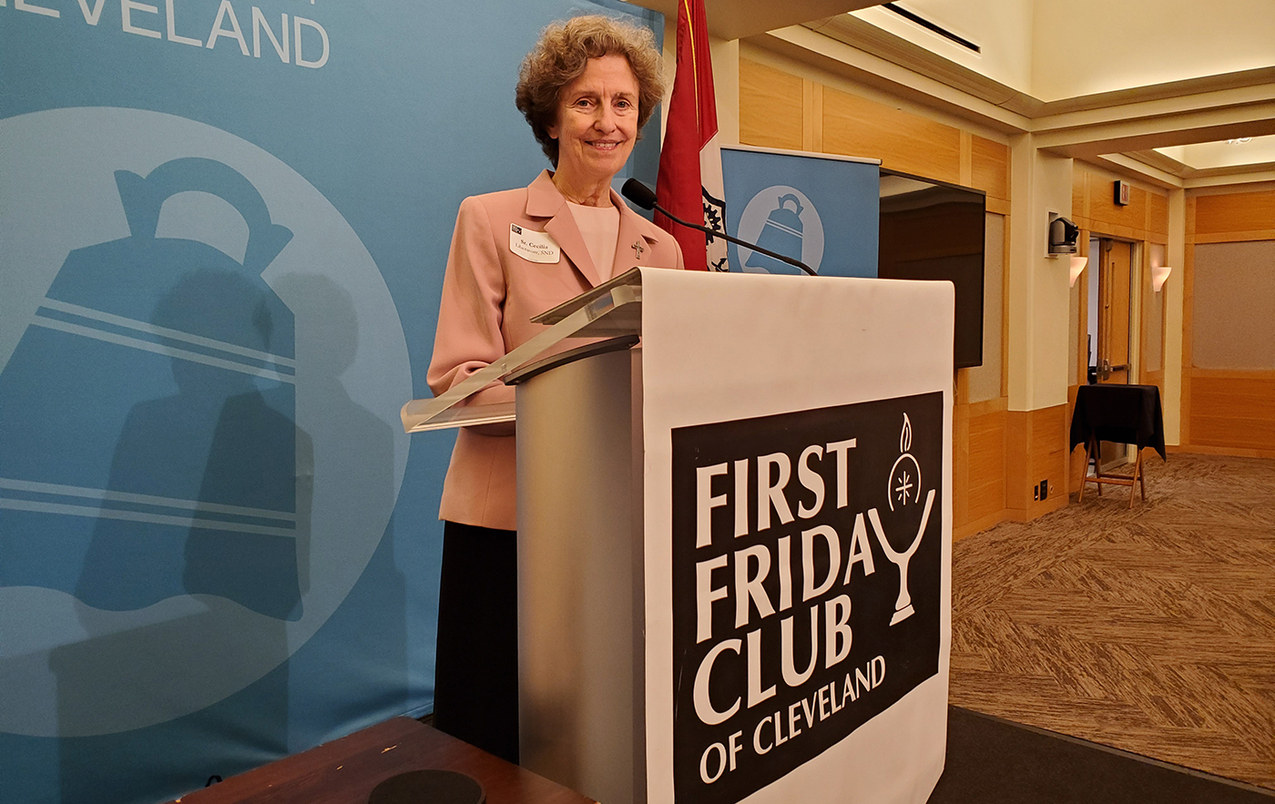 Renee Jones founded the nonprofit center in 1998 as a weekly empowerment program at the Bishop Cosgrove Center. By October 2002, the programs had positively impacted countless people and it expanded into the Renee Jones Empowerment Center with Jones as the president and CEO. The center provides holistic restorative services for minors and adults who are human trafficking and sexual assault victims. Sister Liberatore has worked with the center for more than eight years and serves on its board of trustees.

Recently, the center moved from its office on West 65th Street in Cleveland into bigger quarters in a building owned by the Society of St. Vincent de Paul at 3764 W. 25th St., Cleveland.

Sister Liberatore recounted the tragedy portion of human trafficking, sharing some sobering statistics and misconceptions. For example, she said some people blame the victims, claiming they knew what they were getting into, that the victim committed unlawful acts and was paid for services. Some also believe the victims have freedom of movement and/or chose not to take opportunities to escape. Others mistakenly believe that trafficking involves crossing borders or that United States citizens can’t be trafficked. In some cases, people believe the trafficker’s actions are “culturally appropriate” and it can’t be considered trafficking if the victim and the trafficker are related or married. 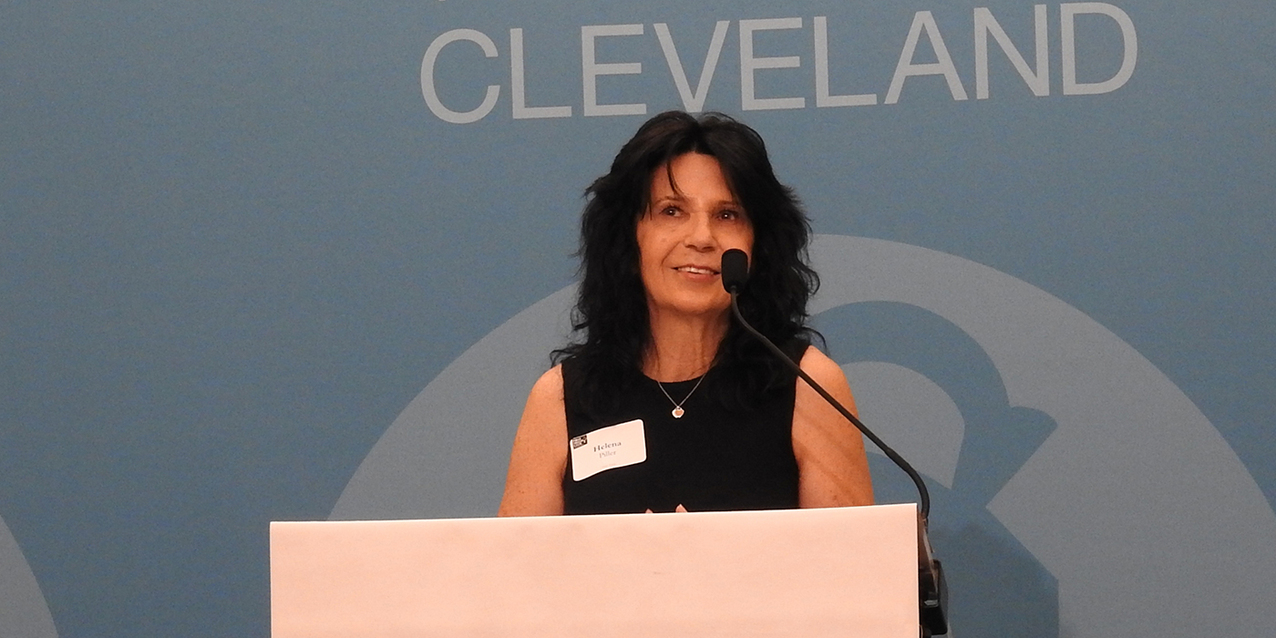 “What is human trafficking?” she asked. “It’s a form of modern-day slavery. It’s the recruitment, transportation, transfer, harboring or receipt of persons by threat of kidnapping, force, fraud, deception or coercion, or by the giving or receiving of unlawful payments or benefits. There is no one picture of what a trafficked person looks like, acts like or seems to be,” Sister said.

Victims may be beaten burned, raped, gang-raped or locked in, she said. Sometimes they are given false promises, lied to about work conditions, restrained or threatened with bodily harm if they do not follow the trafficker’s orders. “The trafficker creates a climate of fear,” Sister said.

Sex trafficking can include prostitution, brothels, massage parlors, websites and truck stops. Sister Liberatore mentioned the recent raids of more than a dozen massage parlors in Northern Ohio – many in the Cleveland area -- that resulted in numerous arrests and prostitution charges. 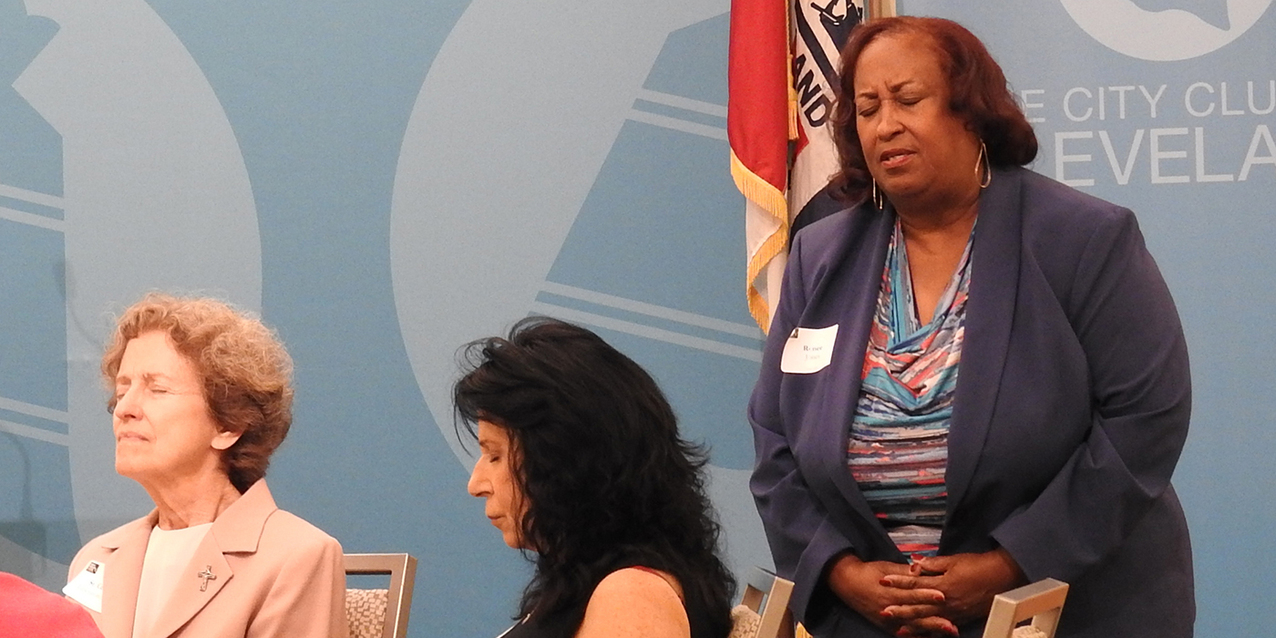 “More than 1,000 children and youths are trafficked each year in Ohio,” Sister said, and another 3,000 are at risk. She said human trafficking ranks second only to drug trafficking as an illegal activity, with gun trafficking third.

“But there is hope,” Sister Liberatore said.

It’s important to be vigilant and to watch for signs or signals that a person could be a trafficking victim, she said. Often victims are very fearful, overly submissive, have no identification or may be accompanied by a controlling person who does the talking. There also may be language or cultural barriers. 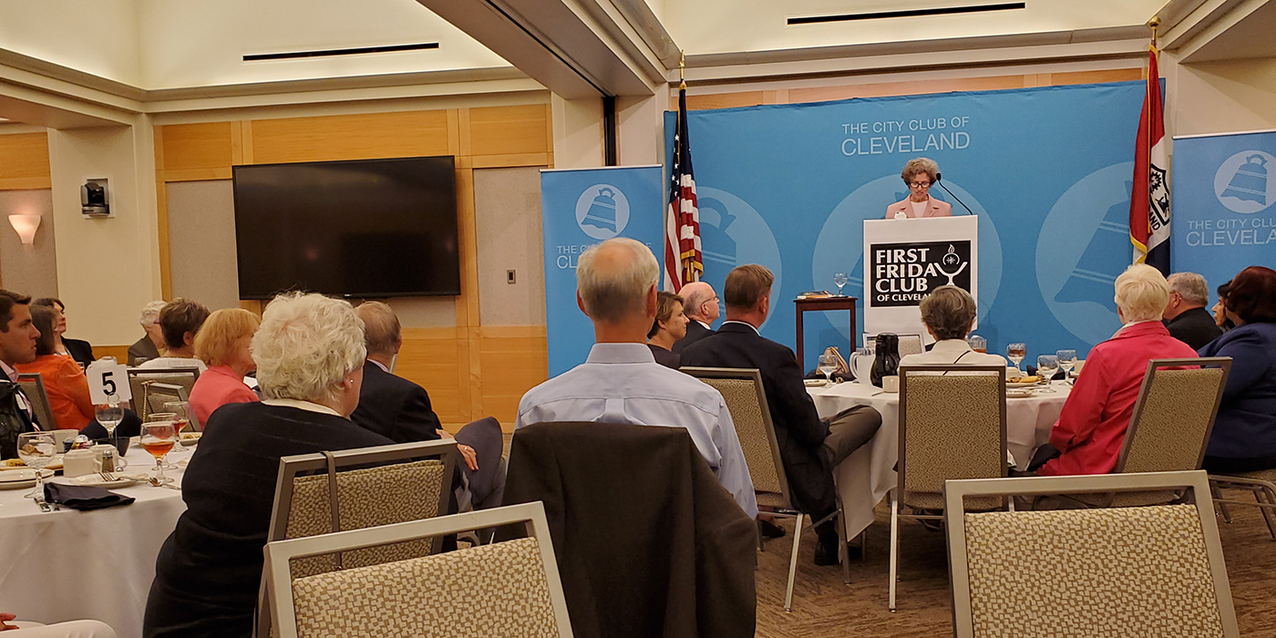 When speaking with suspected trafficking victims, she said there are several questions that can provide crucial information, including asking the person if they can come and go freely, do they need permission to eat, sleep or use the bathroom, do they owe their boss money, did someone take their identification documents and do they get mail.

“It’s important to gain the victim’s trust,” she said, and to report suspected trafficking.

Sister Liberatore said she has developed relationships with law enforcement agencies, prosecutors, lawyers, judges, social workers and others who can help trafficking victims. First responders and medical personnel, including nurses in emergency departments, are being trained to spot and assist victims. 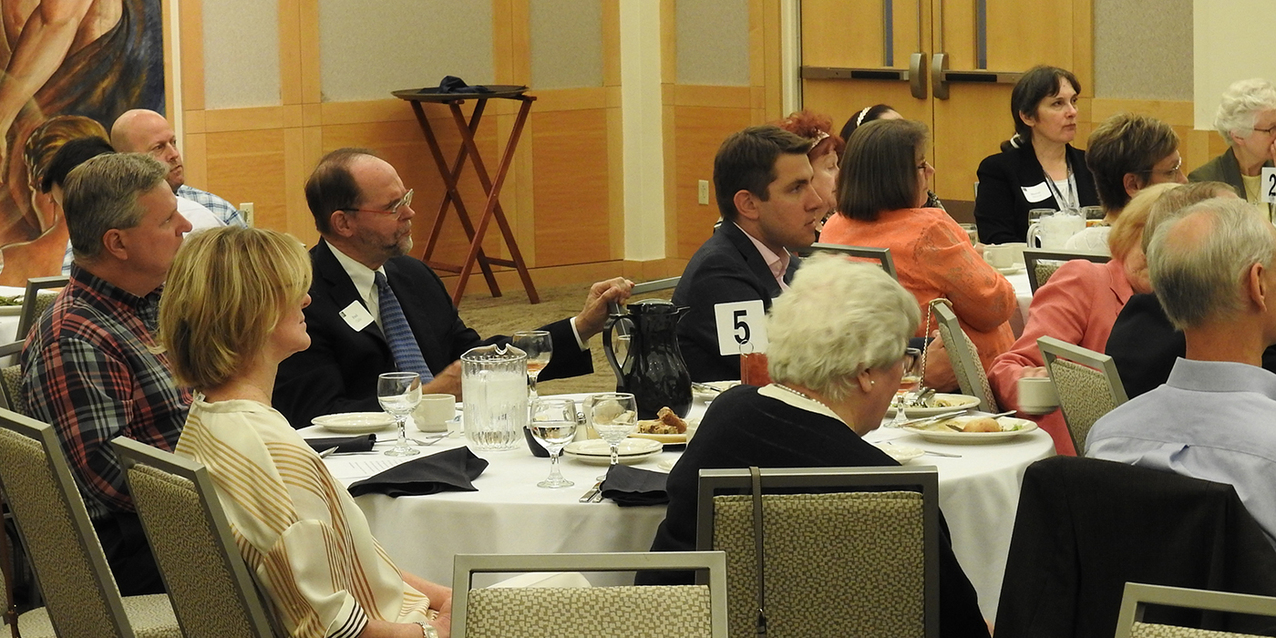 Sister said she spends time attending hearings for the human trafficking docket in Cleveland Municipal Court that is overseen by Judge Marilyn Cassidy. This specialized docket was established in 2014 as an alternative to criminal case processing to address the needs of adult victims of human trafficking. And last year, Cuyahoga County and the Court of Common Pleas, Juvenile Division, joined forces to provide funding for the Safe Harbor docket to provide trauma-informed treatment services for juvenile victims of human trafficking. Catholic Charities, Diocese of Cleveland is one of the agencies that delivers services to victims.

“There is an interagency task force that works to provide services and we are there to be their support for as long as it takes,” she said.

There also are street outreach programs and other initiatives to help identify and assist trafficking victims. Some provide food, clothing, toiletry items and information to the victims. Jones brings red roses and gives one to each trafficking victim. 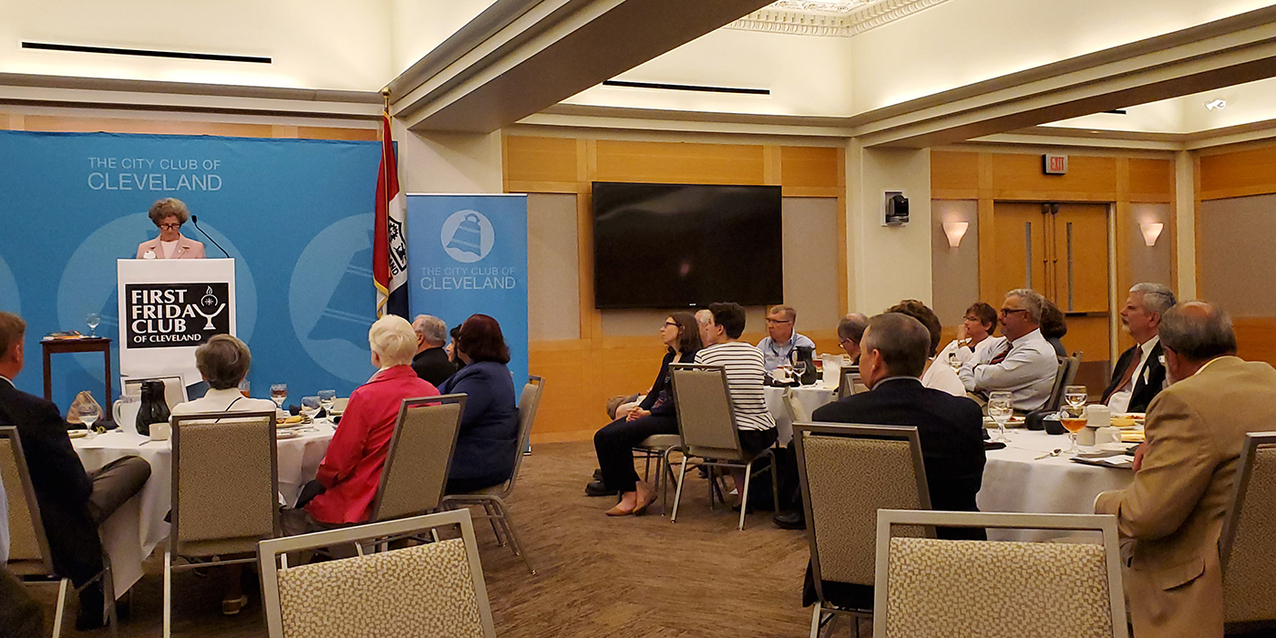 In recent years, the Regional Transit Authority posted “Safe Place” signs on all its buses and trains so youths in crisis situations know they get help immediately. The SOAP Project (Save Our Adolescents from Prostitution) involves attaching stickers containing the National Human Trafficking Hotline number to hotel-size bars of soap and distributing them to area hotels and motels. Sister Liberatore said even if some hotel chains don’t use the soap bars, they may agree to allow some to be left for housekeeping employees who either could be trafficking victims or who might see evidence of trafficking.

“Catholic social teaching enforces and reinforces the dignity of every human being. God is the creator and originator of all life,” she said, noting there are many ways to deprive people of life including enslaving them or denying them human dignity. 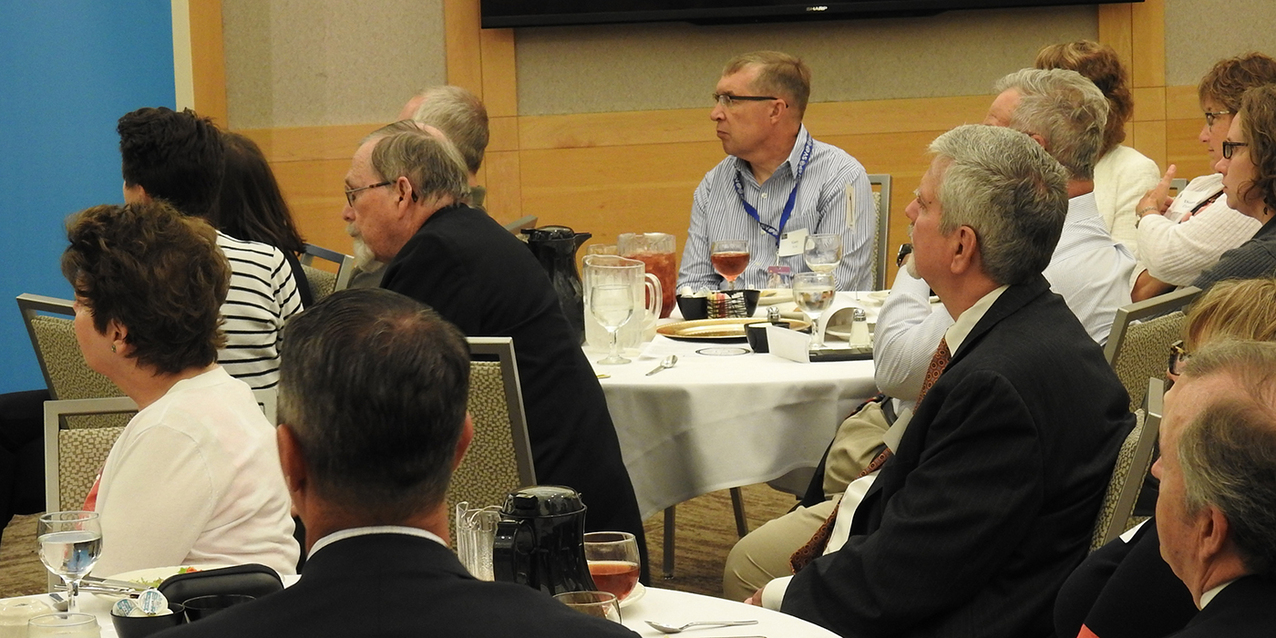 “Don’t look the other way,” Sister said. “We are believers in a God who is good all the time.”

More information on human trafficking is available from the National Human Trafficking Hotline website or by calling 888-373-7888.

Lannie Davis-Frecker, president and CEO, Julie Billiart Schools, will speak at the club’s Oct. 3 meeting at The City Club, 850 Euclid Ave., Cleveland. The buffet opens at 11:30 a.m. and the program begins at noon. Cost is $25.

Click HERE or call 216-589-9852 for reservations or more information on the First Friday Club of Cleveland.