Hundreds of people filled St. Ambrose Church for the noon Mass on Sept. 8. Bishop Nelson Perez celebrated the liturgy, during which he dedicated the recently renovated church and the new altar.

Kevin Yougher, team chair of the parish’s Vision 20/20 team, presented the redesigned church to the bishop. The project, which took about a decade to complete, included improvements to the entire parish campus and cost about $5.6 million, according to Father Bob Stec, St. Ambrose pastor. 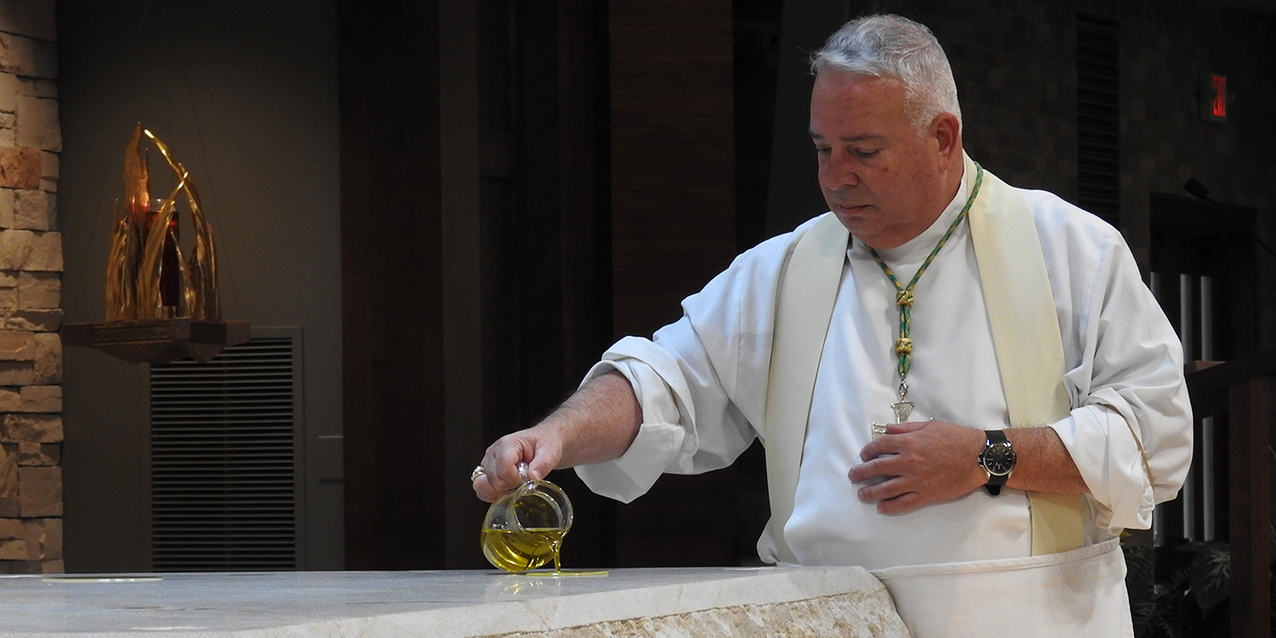 “St. Ambrose is a big, busy parish,” Bishop Perez said. “But the most important thing you do here is the Eucharist.” He said at baptism, we are chosen to be lights for Christ and at confirmation we are to be witnesses of Christ for the world.

The altar is an important part of the church and is to be used for only one purpose: the sacrifice of the Mass, he noted.

“You and I are nourished and strengthened from here,” the bishop said, pointing to the church’s new stone altar. “The altar is a constant in the sacrifice of the Mass despite many other things that have changed. The celebration of the Eucharist for the past 2,000 years has been constant.” 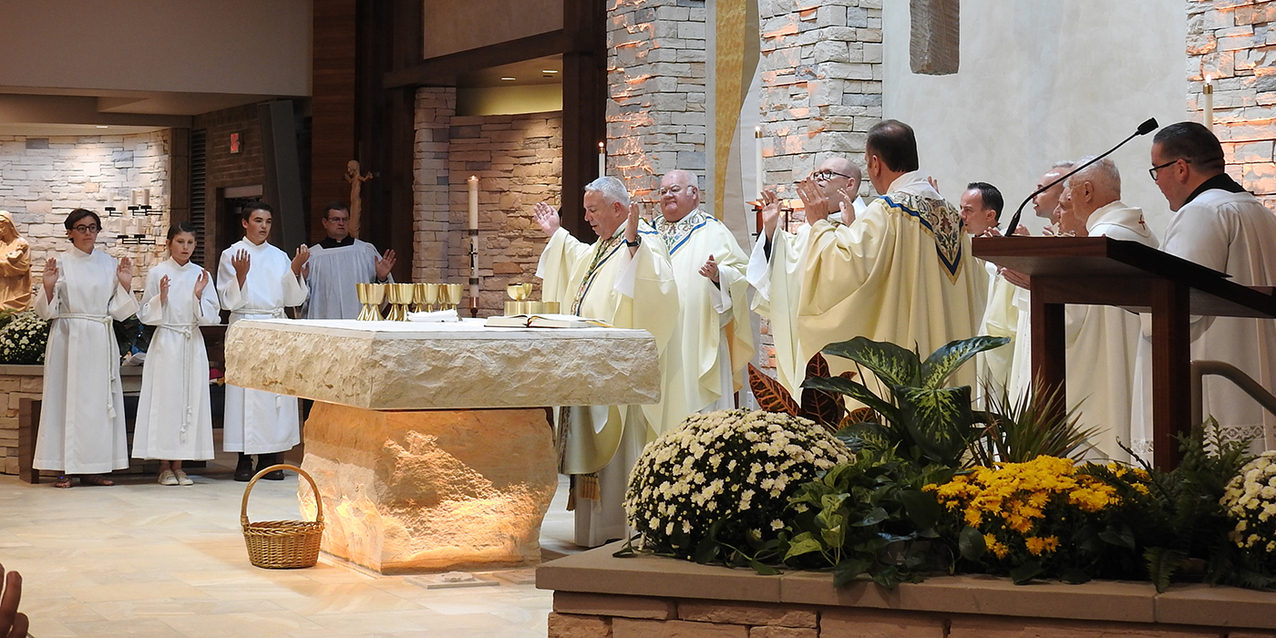 Because we generally have easy access to Mass, Bishop Perez said it may become too familiar to us. In some areas, he said people travel for hours in order to attend Mass.

“The altar unites all of us, from right here in Brunswick, Ohio to the Vatican and remote areas of the planet. God is our refuge and our hope through the ages,” he said. “Ultimately, the rock we lay our head on is Christ. That is why we venerate the altar.”

Bishop Perez poured sacred oil that had been blessed earlier in the year at the chrism Mass on the new altar and rubbed it into the stone. He also incensed the altar. Deacons processed through the church as the walls were blessed and incensed. 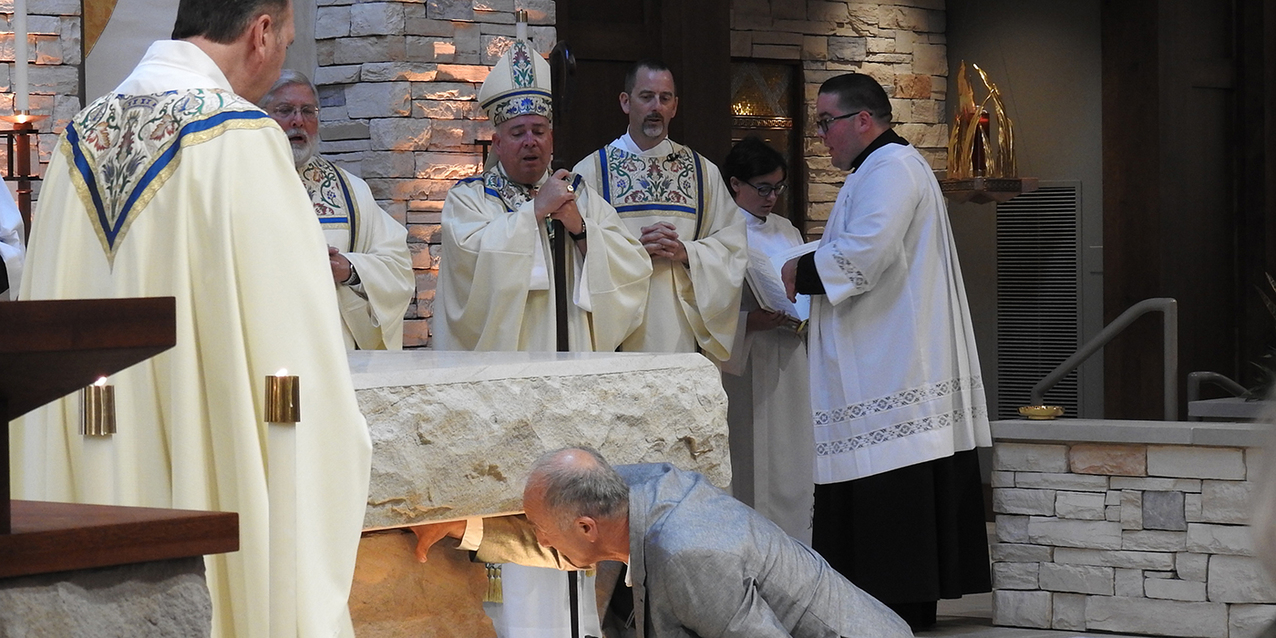 Father Stec said relics of Pope St. John XXIII, St. Teresa of Calcutta (Mother Teresa) and St. Oscar Romero will be placed in the altar at a later date.

After the altar was dedicated, parish representatives cleaned off the excess oil and placed a cloth on the altar. Deacons then prepared the altar for the rest of Mass. 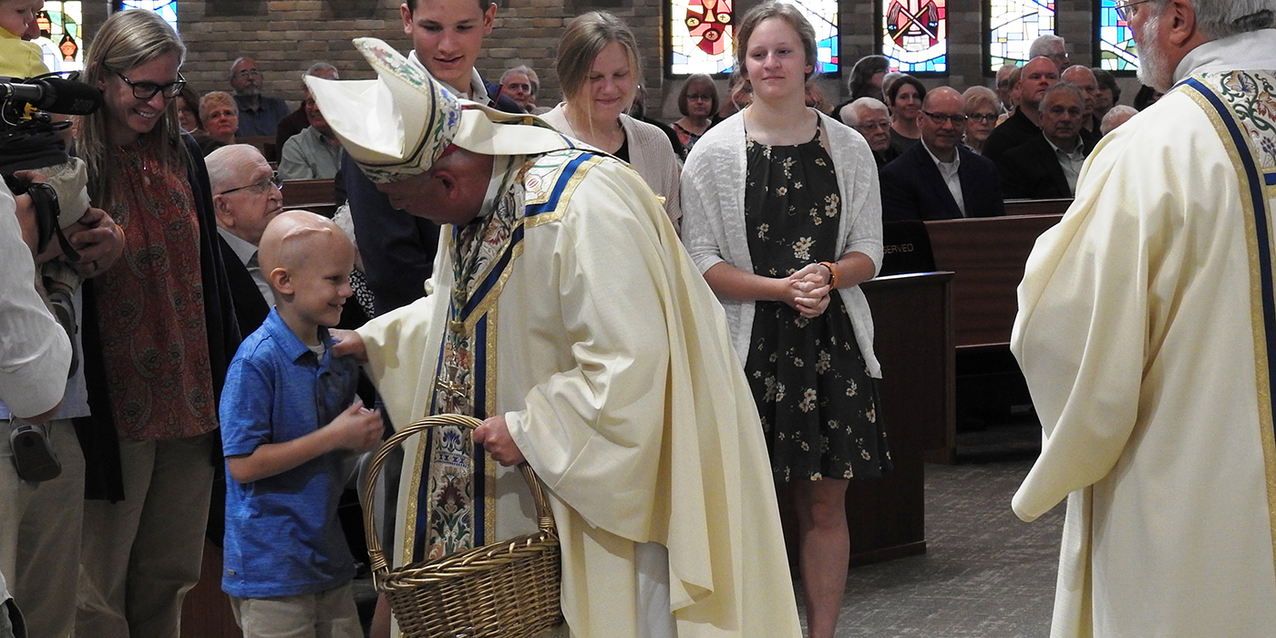 The gifts were brought to the bishop by 10-year-old Collin Nemet and family members. Collin had been seriously ill with cancer and had numerous tumors including in his brain, spine and hips. After what some are calling a miracle, doctors said his scans are clear and it appears he is cancer free.

Father Stec said inviting priests who were involved in the parish’s early years as well as those who are currently assigned there, was a way of connecting generations in the parish. “We‘ve been using this theme of generations,” he explained, noting that also was the theme for The FEST last month, a diocesanwide celebration that he coordinates each summer at the Center for Pastoral Leadership in Wickliffe. 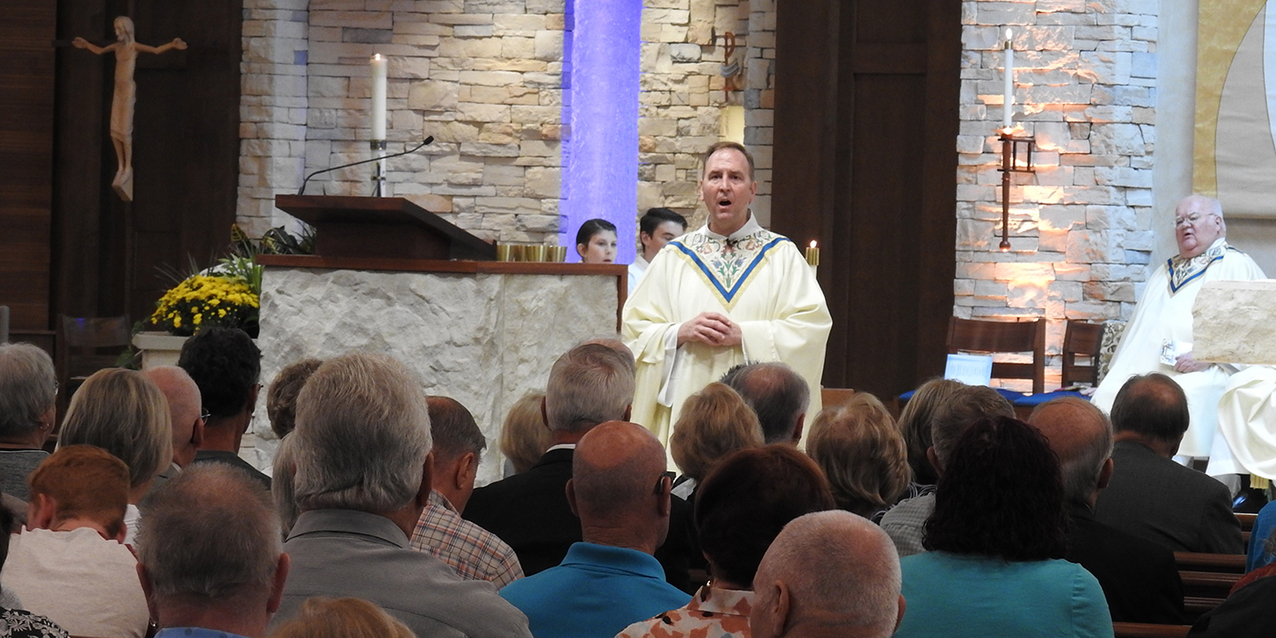 “I talked to Father Carlin, who as a newly ordained priest assigned to the parish, helped Father Hilkert (a former pastor) build the church in 1982 and asked him if there was anything he would do differently, Father Stec said. He also gathered input from other sources and shared that with Marous Brothers Construction, which managed the project. Father Stec said he invited Father Carlin to join him when the cornerstone was removed during the project.

“Generations of Faith Together for the Glory of God” was the theme of the Vision 20/20 project at the parish, which has 5,665 families and about 17,000 people. The reconfigured sanctuary can seat more than 1,100 people.

In addition to the new altar designed by Koehn, he also created a baptismal font, carved a 13-foot wooden crucifix that is a focal point in front of the church and designed and carved a large statue of the Blessed Virgin that arrived just days before the dedication ceremony, which took place the day after the feast of the Nativity of Mary. Koehn spent 700 hours on the Blessed Mother statue and about 2,000 hours creating the crucifix. 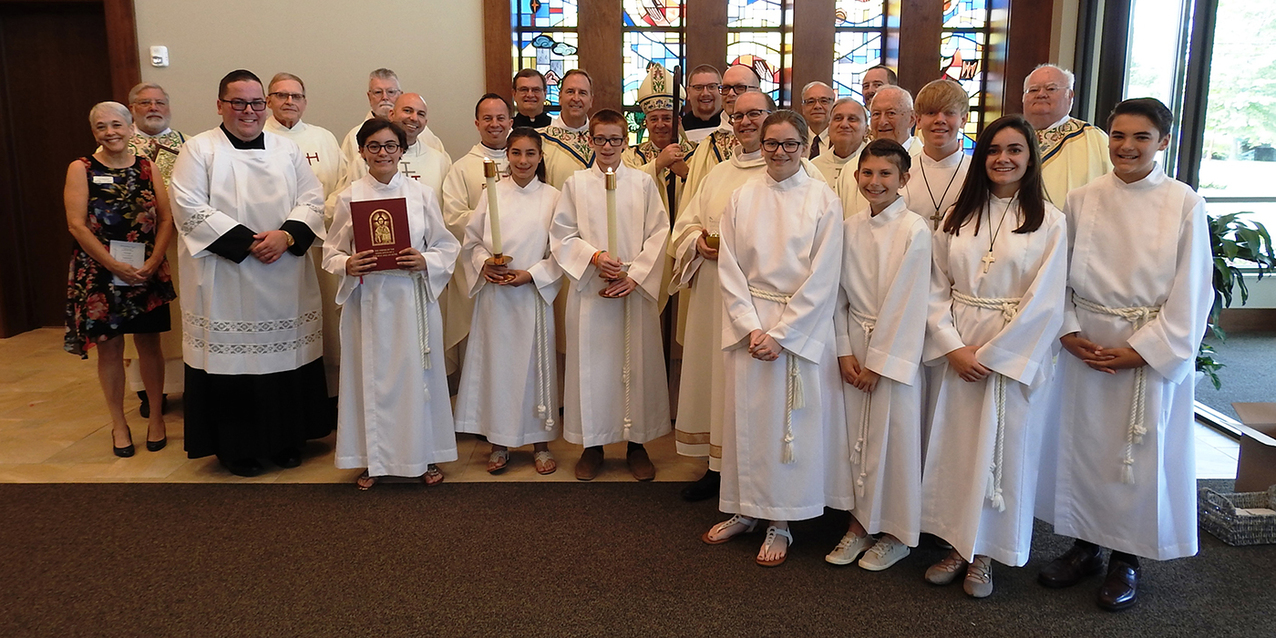 Father Stec said Koehn is working on special images of St. Joseph: a large, five-panel piece that will be installed on a side wall opposite Mary’s statue near the front of the church. He is uncertain when it will be completed.

“We laid out a 10-year plan for our campus,” Father Stec said. Across the street two additional construction projects are under way – one for a gym and preschool and another for senior citizen housing, which also incorporates the generations theme.

“It’s ironic that we are celebrating Grandparents Day today (Sept. 8, the day of the church/altar dedication),” Father Stec said, referring again to the generations theme. “We help each other remember what we inherited and spark the divine imagination.”