Fifty years ago, a plan was developed in the Catholic Diocese of Cleveland for four parish high schools – St. Stanislaus, St. Michael the Archangel, Our Lady of Lourdes and St. John Cantius, all in Cleveland – to merge and create Cleveland Central Catholic High School. Two of the founding schools – St. Stanislaus and St. Michael – were established in 1881. Our Lady of Lourdes was founded in 1883 and St. John Cantius in 1898. Among the benefits of the new school was bringing students together from both sides of the Cuyahoga River.

Nearly 300 people gathered on Sept. 7 under a large tent across from the CCC campus to celebrate its 50-year anniversary and to look ahead as the school envisions its future. CCC is among 20 high schools in the diocese, five of which are diocesan-owned high schools, sometimes referred to as “the bishop’s schools.” The others are Elyria Catholic, Holy Name, Lake Catholic and Villa Angela-St. Joseph high schools. 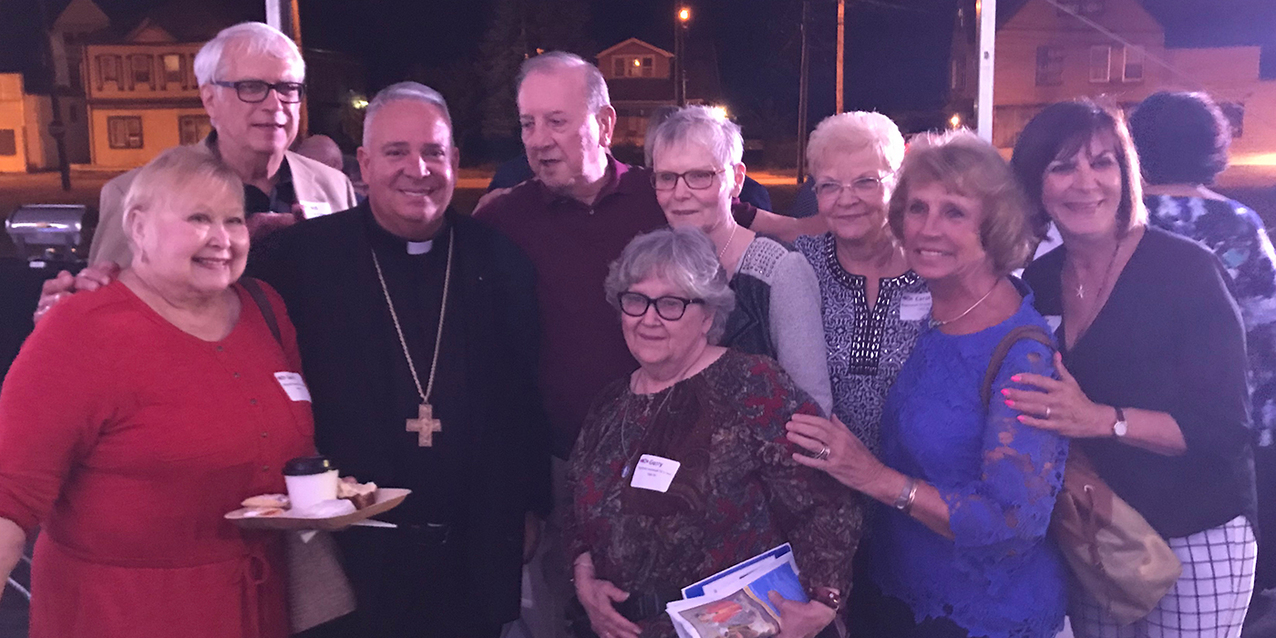 “Tonight we reflect on the remarkable history of our school, celebrate its present successes and the possibilities of this hopeful new school year, and share our vision for an even brighter future,” said Leo Hyland, CCC president.

The vision for the future includes making the Social Center compliant with the Americans with Disabilities Act, adding arts, athletic and meeting space, increasing parking and developing a gathering space, Hyland said. A generous donation from a 1961 graduate of St. Stanislaus High School will help the vision become a reality and help CCC position itself for the future, Hyland added.

“Our mission is to challenge and encourage our students to excel academically, to deepen their faith in God and to live a life of service so they may face the future with confidence and hope,” Hyland said. 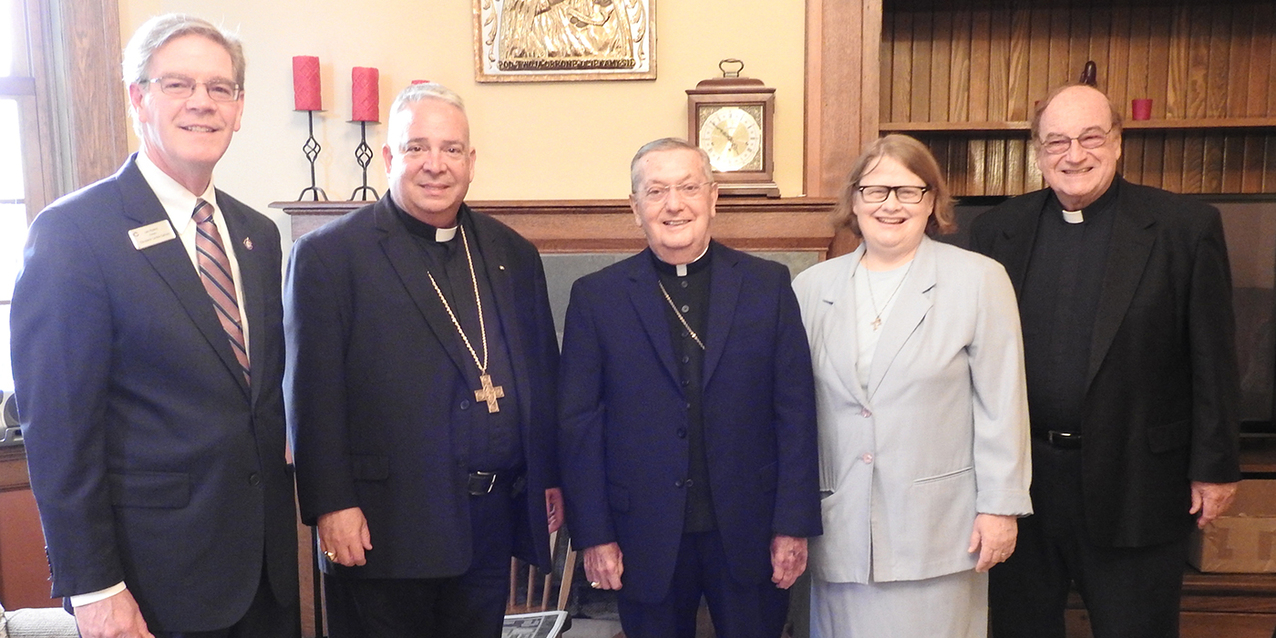 Hyland said this statistic is important since more than 19% of CCC students have a diagnosed special learning need and most come from families that are underserved. The entire student body receives some form of financial assistance and more than 84% qualify for federal free or reduced-price lunch programs. Last year, students received more than $4 million in tuition assistance, including state-funded vouchers. Also, more than 92% of CCC students live in Cleveland and at least 80% do not identify as Catholic.

CCC began the new academic year with an enrollment of about 570 students. 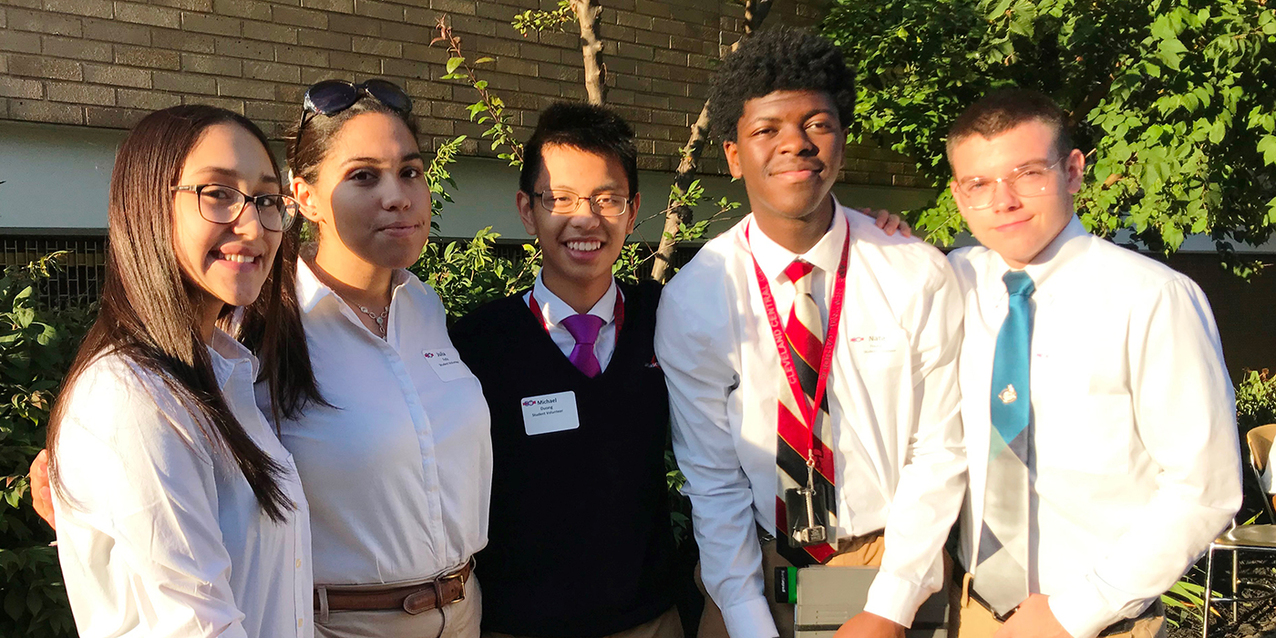 Hyland said the school is large enough to provide a quality education, while being small enough for each student to be known by name. It also offers 10 competitive athletic programs and more than 20 student clubs and activities.

At its founding, CCC had an enrollment of 1,600 students and all four parish high school buildings were maintained, with students and faculty rotating regularly among the campuses that were located on both the east and west sides of the Cuyahoga River.

As enrollment decreased, three buildings were closed: Our Lady of Lourdes in 1976; St. John Cantius in 1988 and St. Michael’s (which had been the location of the Scranton Campus after St. John Cantius closed) in 2003. Since then, CCC has been consolidated on the Forman Campus (St. Stanislaus) with all activities at this location in Cleveland’s Slavic Village neighborhood. 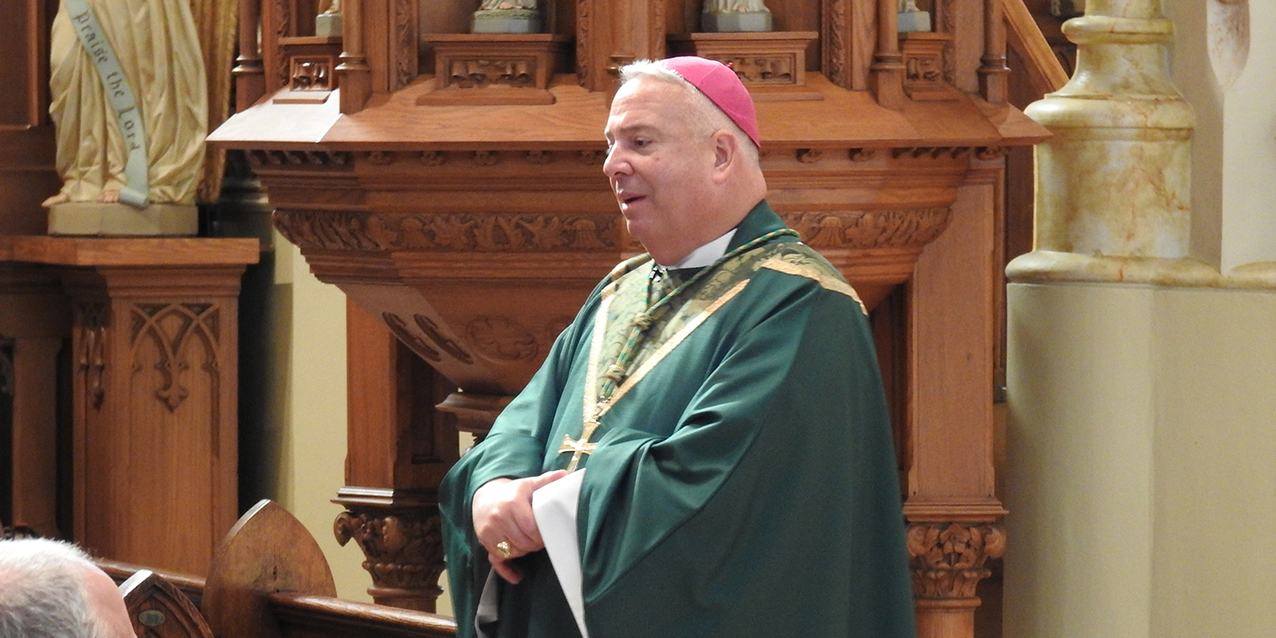 As CCC looks forward, Hyland said the school is well-positioned, but there are needs to be met, which is why the school officials are envisioning its future and accepting financial gifts to help fund its mission.

He had praise for those who helped establish the school, including Bishop emeritus Anthony Pilla, and for those who ensured it would continue, including Bishop emeritus Richard Lennon and Bishop Nelson Perez. Hyland also thanked Frank O’Linn, diocesan secretary for education and superintendent of schools, his staff and Father Eric Orzech, St. Stanislaus Parish pastor, for their support.

Bishops Pilla and Perez attended the gala. Bishop Perez celebrated Mass at the nearby St. Stanislaus Church prior to the celebration. Bishop Pilla was in attendance, as was Father Neil O’Connor, a former CCC principal. 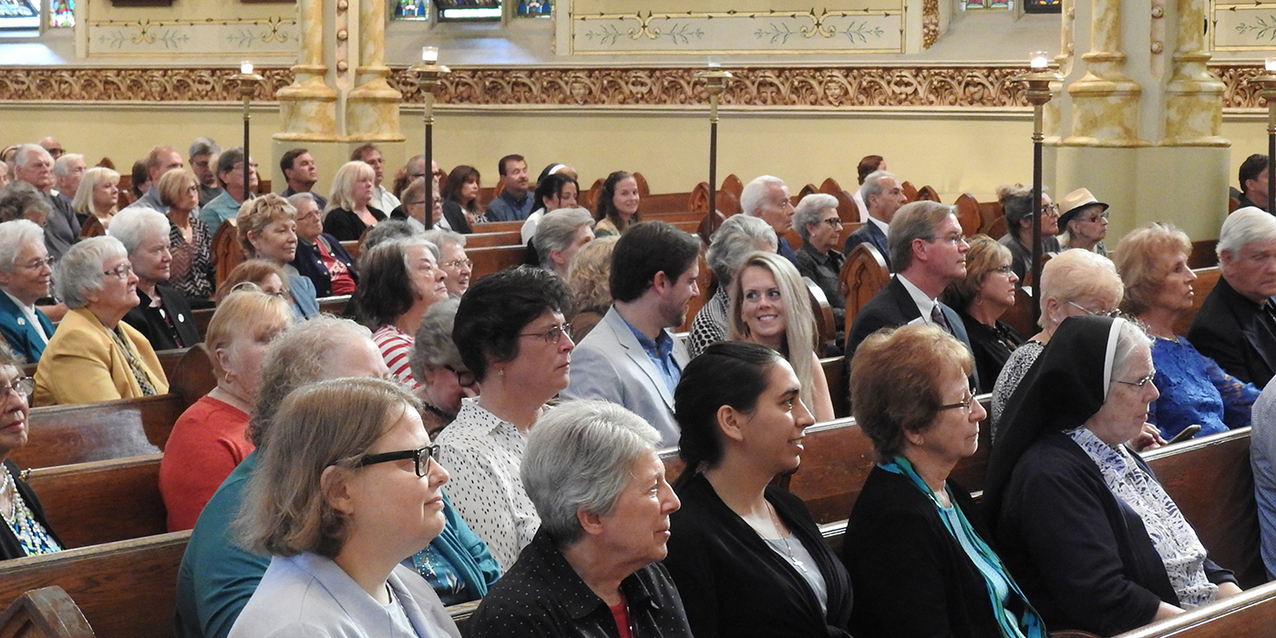 “Fifty years is a long time,” Bishop Perez said in his homily at the Mass. “Education here (St. Stanislaus) began in 1881 and it was flexible enough to adapt as the years went by and needs changed,” he said. Change can be difficult, and we may not always like it, the bishop noted.

“We all change, and sometimes not for the better,” he said, adding that if we have a solid foundation and we build our foundation on mission, it will be strong.

“The mission is what’s important – not the structure. The people of this area built on mission,” Bishop Perez said. “If they had built only on structure, we wouldn’t be here tonight.” He credited the Sisters of Notre Dame and those from six other religious orders who were instrumental in the school’s success. The bishop asked anyone who attended CCC in 1969 to stand and he acknowledged them, the faculty and others who are part of the school’s success story. 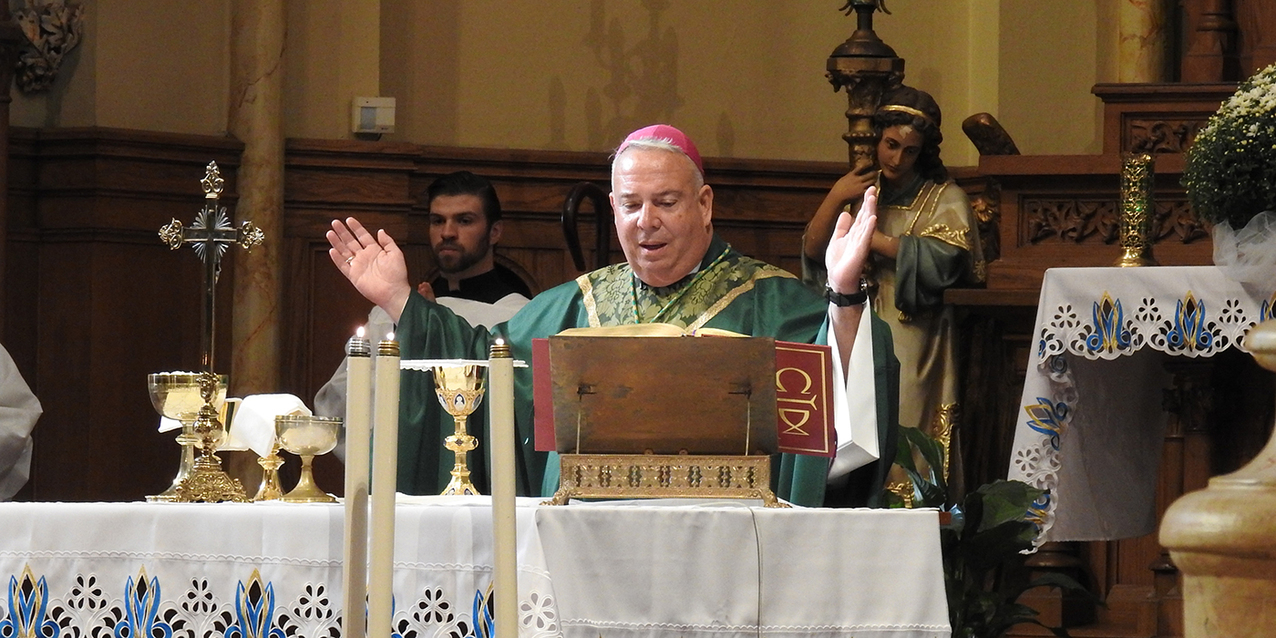 After Mass, Bishop Pilla recalled some difficult days when CCC enrollment was declining and there were concerns the school would have to close. Diocesan and school officials decided to keep it open, “And I’m so glad we did,” Bishop Pilla said. “You are the Church. This is here today because of you.”

Bishop Pilla recalled being with Pope St. John Paul II one time when he remarked that Catholics in the United States are well-informed about their faith – something the pope credited to American Catholic schools. “You do that at Cleveland Central Catholic. God bless you,” the bishop said.

Victor Benton, a 2008 graduate of St. Stanislaus School, a 2012 CCC alumnus and a Kent State University graduate, is a Spanish teacher at his alma mater. He talked about how difficult it was for his family to send him to Catholic schools as they struggled with finances.

“I’m living proof that the donations you make have an impact,” Benton said at the gala. “Nothing about CCC is common; everything is extraordinary. I want to form bonds with my students to let them know things are possible. There is an amazing sense of community here and it’s due to all who support this school’s dream and vision. I was just a kid from Garden Valley at East. 79th and Kinsman. Seeds were planted here and my faith in God was deepened.” 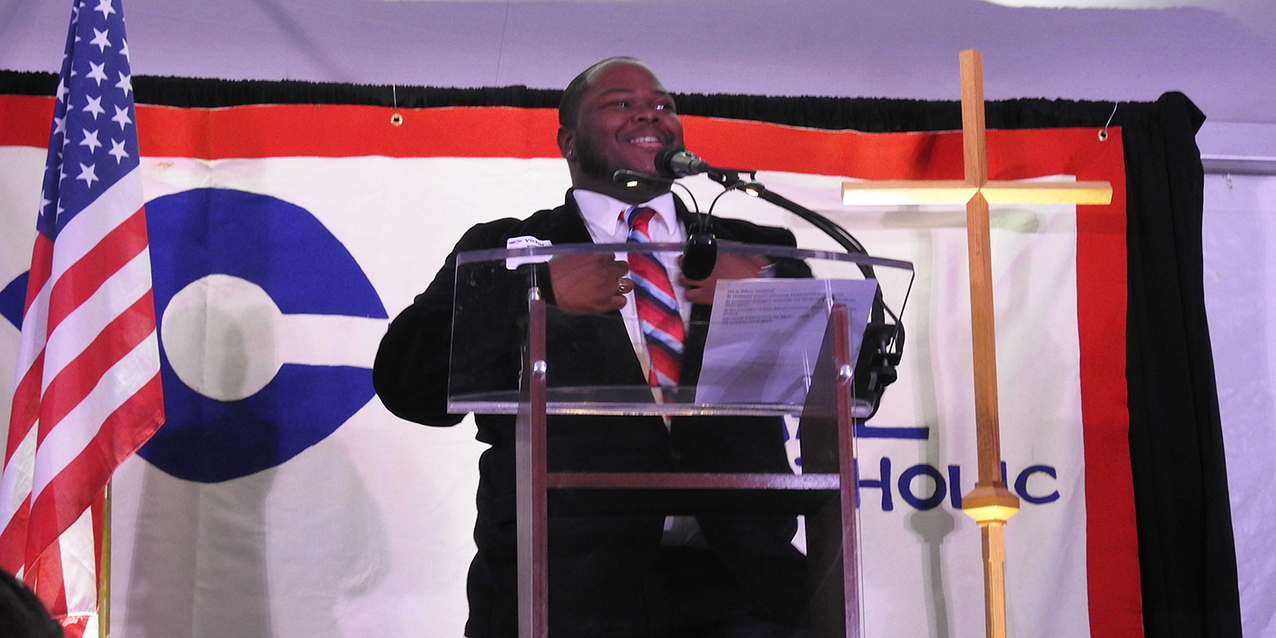 Notre Dame Sister Allison Marie Gusdanovic, CCC principal, was credited for helping to foster the school’s mission. “Our students face the future with confidence and hope and Victor is an example of that,” she said. “Our students become our mission. That’s what we’re all about.”

John Cvetic, CCC advisory board chair, explained that there is about a $2,500 gap between what is covered by tuition, vouchers and work study, so the support of donors is important.

CCC completed a $13 million Vibrant in the City capital campaign that added 25,000 square feet of new construction including classrooms and labs, meeting space, a chapel and multi-purpose practice gym. That addition opened in 2006. The campaign also increased the school’s endowment fund. 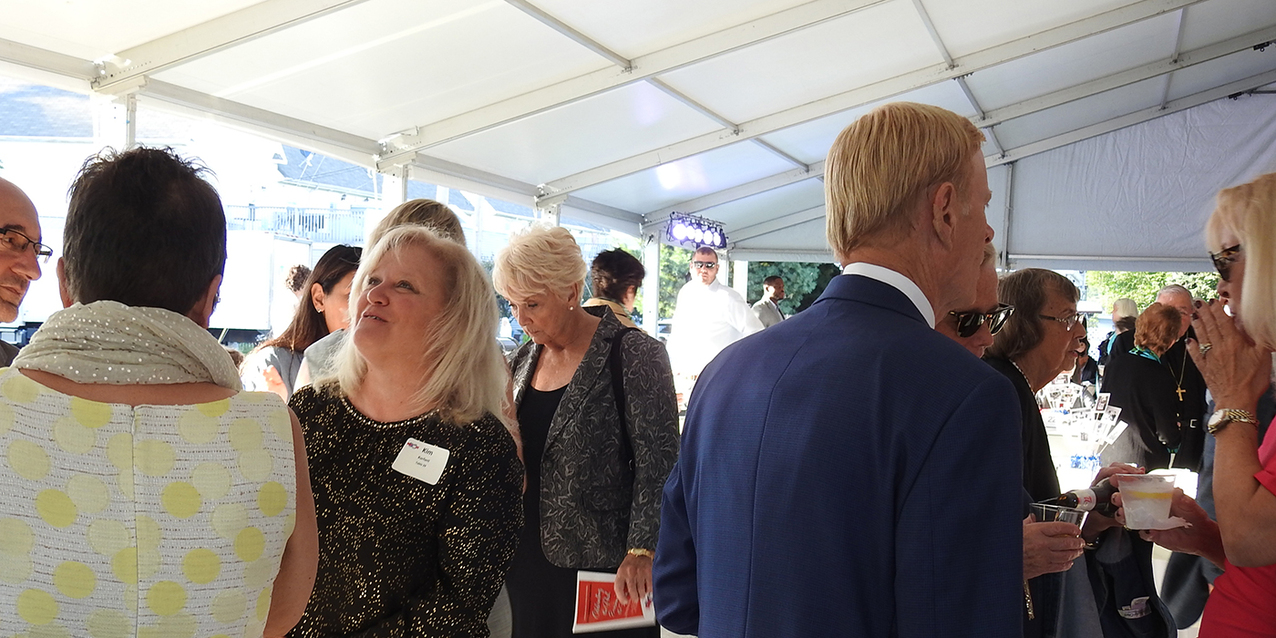 A partnership with the city of Cleveland, the diocese and Third Federal Foundation resulted in the opening of a new athletic facility, Ben Stefanski II Stadium, which was dedicated in 2010.

In June 2018, the Beacon of Hope campaign, which raised more than $5.8 million, concluded. These funds were used for facility upgrades, to increase the endowment, to bolster the special education program and to complete facilities at Stefanski Stadium.

“This is a win, win, win for CCC, St. Stanislaus and the broader community,” Hyland said of the vision for the school’s future.