Oct. 5 was a night to remember as the biennial Alleluia Ball hit a historic fundraising level of $1.32 million to provide tuition assistance for students in Catholic schools throughout Northeast Ohio. Also unveiled at the event was a new initiative, “Fund a Dream,” that supports funding an individual student’s tuition.

Cardinal Timothy Dolan, archbishop of New York, celebrated Mass before the dinner. He also was the keynote speaker at the sold-out event attended by nearly 1,000 people at the Hilton Cleveland Downtown. The event was organized by the Catholic Community Foundation, the fundraising arm of the Diocese of Cleveland.

“You’re like the pope,” quipped Bishop Nelson Perez as people jockeyed for position to greet the cardinal and get a photo with him.

Cardinal Dolan replied to the bishop’s remark during his homily saying, “If I’m the pope, the Peter’s Pence collection goes to the Catholic schools in the Diocese of Cleveland.”

He said he was looking forward to the Alleluia Ball for some time, noting he was intrigued by the theme, “Keeping Dreams Alive.” In the first reading, the cardinal said we heard that a dream has its time. He said memories and dreams are necessary for a community to endure, explaining that dreams are filled with vision, promise and hope. “Memories without dreams will be nothing more than museum pieces. Catholic schools have both dreams and memories,” he added.

In the Old Testament, he said people remembered what God did for them. “We have dreams for our children – dreams of what God still intends to do for them. Our schools exist not only to help students get good jobs but to get our children into heaven,” Cardinal Dolan said.

Concelebrating the Mass were Bishop Perez, Bishop emeritus Martin Amos, retired bishop of Davenport and a native of Cleveland, Auxiliary Bishop emeritus Roger Gries and about 20 priests from the diocese. Assisting was Deacon Dennis Conrad and Deacon Jim Armstrong was emcee.

Radio personality Brooke Taylor was mistress of ceremonies for the evening. Taylor is the mother of five, including a special-needs daughter. She and her husband made the commitment to give their children a Catholic education, Taylor said.

“The sense of encounter with God reminds them that they are loved. The greatest people in the world are givers,” she said.

Lorraine Dodero, Alleluia Ball chair, is recognized throughout Northeast Ohio for her community service and philanthropic involvement. She is the founder and current president of the Ohio Chapter of the Patrons of the Arts in the Vatican Museums.

“Each of us has a personal legacy from everything we do,” Dodero said, recalling how she thought opening her own ad agency would be her legacy. However, her Italian mother reminded her that she had no idea of what her legacy would be. “She told me my legacy would be every life that I touched. We all have the power to help these children have a future,” Dodero said.

Bishop Perez said when he asked Dodero to chair the Alleluia Ball, “she accepted immediately because of her passion and her big heart. Thank you for taking on the challenge and starting the Fund a Dream campaign,” he said. The goal of Fund a Dream is to provide more families with access to a Catholic education. Currently, 3,500 students benefit from tuition assistance at the 108 Catholic schools in the diocese.

“If you could only see what I see; the beauty of the people I see,” the bishop said. In his travels throughout the diocese and beyond Bishop Perez said he sees children “and that’s the reason we do what we do.” He mentioned his recent visit to Julie Billiart School in Lyndhurst, which educates students with a variety of learning differences, and recalled how one student described the school to him. "'It’s like heaven on earth,’ the student said. They are exposed to the gift of heaven on earth through the presence of Christ,” the bishop added.

The bishop also recalled a touching moment during last year’s #WeGiveCatholic event, a 24-hour online fundraising event for Catholic schools, parishes and organizations. One student asked to speak with him privately and explained that he really wanted to continue attending a Catholic school but financially it wasn’t possible. “He asked if there was anything I could do to help. I was touched,” Bishop Perez said, noting he asked Patrick Grace, executive director of the Catholic Community Foundation, to help the student.

“It’s all about keeping the dream of a Catholic education alive for as many children as we can,” Bishop Perez said, before introducing Cardinal Dolan, who was his metropolitan archbishop when he was an auxiliary bishop in the Diocese of Rockville Centre, New York. “He’s a super kind, generous, loving man. And don’t underestimate his heart and his love for the Church. Thank you for being here, your eminence, and for sharing your love of Catholic education,” he added.

“This is one of the most elegant, beautiful evenings I’ve ever attended,” the cardinal said, drawing applause from the crowd. “I love New York, but it’s good to be out. I’ll go anywhere, any time to support Catholic schools. And to let you know how serious I am, I gave up a box seat at the Yankees playoff game to be here,” he added.

Commenting on the differences between New York and Cleveland, Cardinal Dolan said, “Traffic in New York is incredible. Here I could see traffic moving. And in New York, it’s almost impossible to find a parking space. I bet you didn’t know that Mother Cabrini is the patroness of parking spaces,” he quipped, sharing this limerick: “Mother Cabrini, don’t be a meanie. Find me a parking spot for my machiney,” which drew laughter from the crowd.

On a serious note, the cardinal said he read an article outlining how Catholic schools tower over other educational systems with exceptional test scores, high graduation rates and most students continuing on to college.

“But the most important thing is the development of character and faith. We’re Catholic inside and out,” Cardinal Dolan said, adding that the article pointed out that students who attended Catholic schools have a lower percentage of incarceration and fewer babies out of wedlock. “They are more likely to vote and they have a higher rate of vocations. Catholic schools have all three things: higher test scores, character development and faith. Our goal is not just giving the children a good education, but also getting them into heaven,” he said.

“Thank you for working together to keep the dream alive for our treasure – our beloved children,” the cardinal said.

Attendees also saw a short video (available above) featuring Aiden, a senior at Elyria Catholic High School, who is one of six children – including two with special needs. He shared how tuition assistance is helping his family achieve the goal of attending Catholic schools. 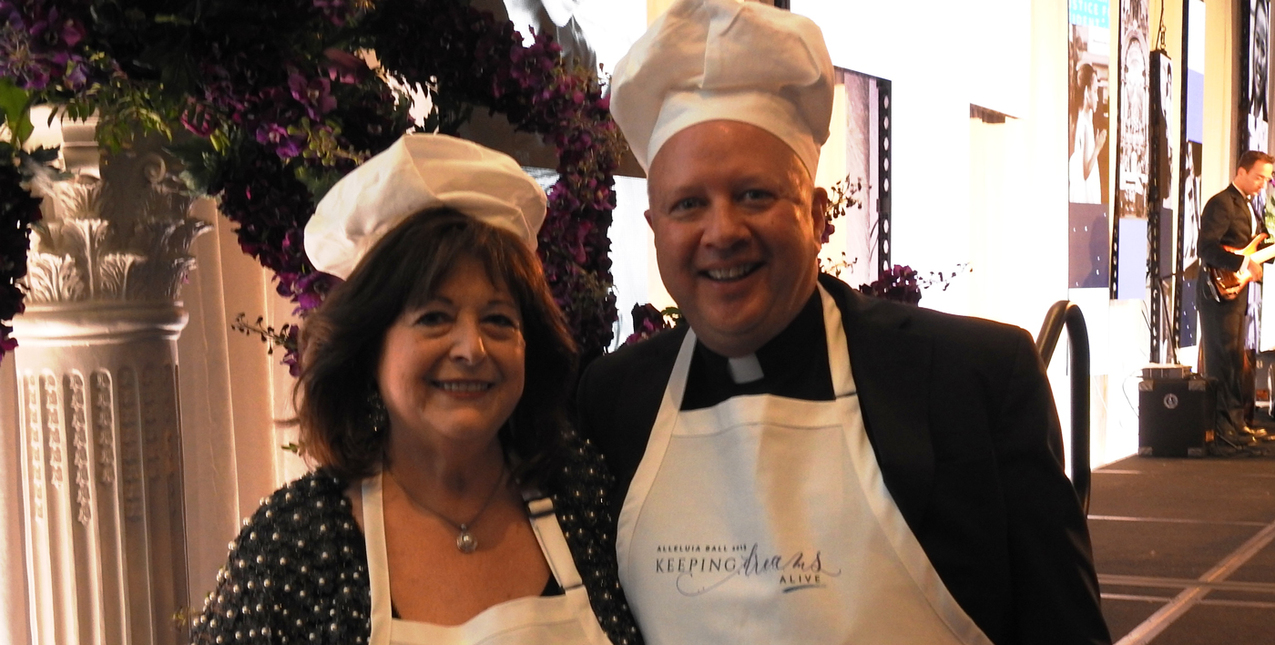 “Dreams don’t just happen, they take a lot of work,” he said.

The event also featured a call to the heart, which offered attendees an opportunity to make a donation at various funding levels. A live auction for a specially planned trip to Italy and an opportunity to win a homemade Italian dinner at the cathedral rectory also were part of the evening. The dinner for eight will be prepared by Father Dan Schlegel, secretary for clergy and religious, and Dodero. Bishop Perez also will attend.

After the fundraising concluded, guests danced to live music and could have photos taken in front of a special Alleluia Ball backdrop.

Since its inception, the Alleluia Ball has raised more than $7 million to support Catholic schools and families who seek a Catholic education for their children. For more information about Fund a Dream, click HERE.