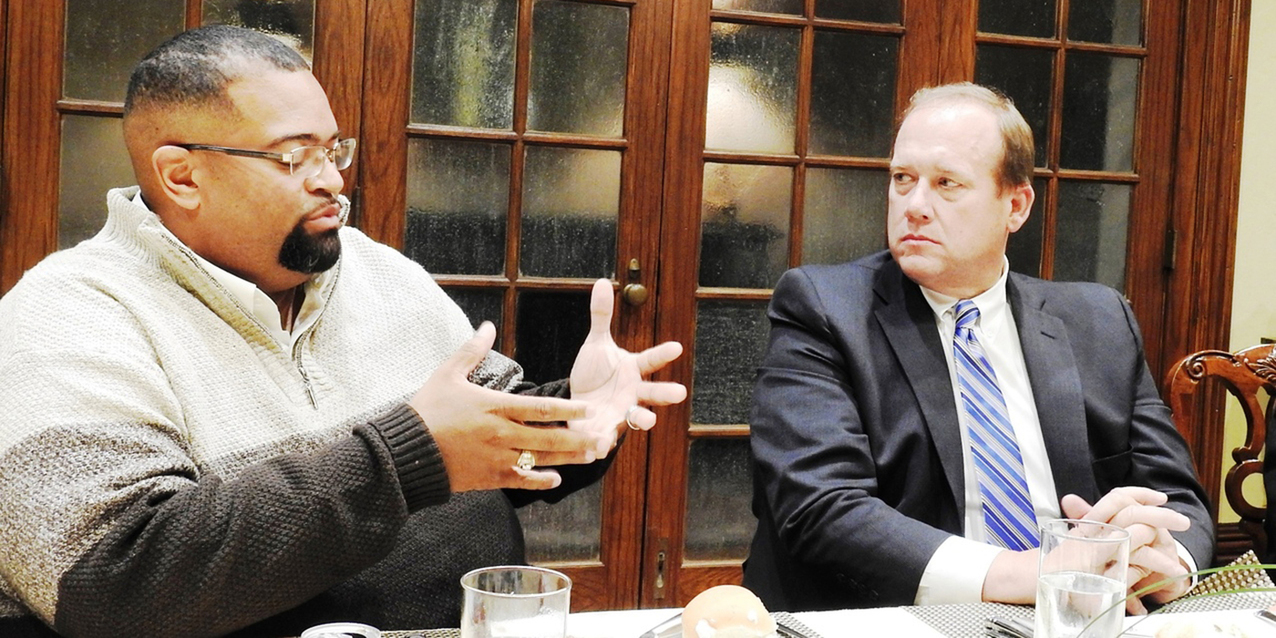 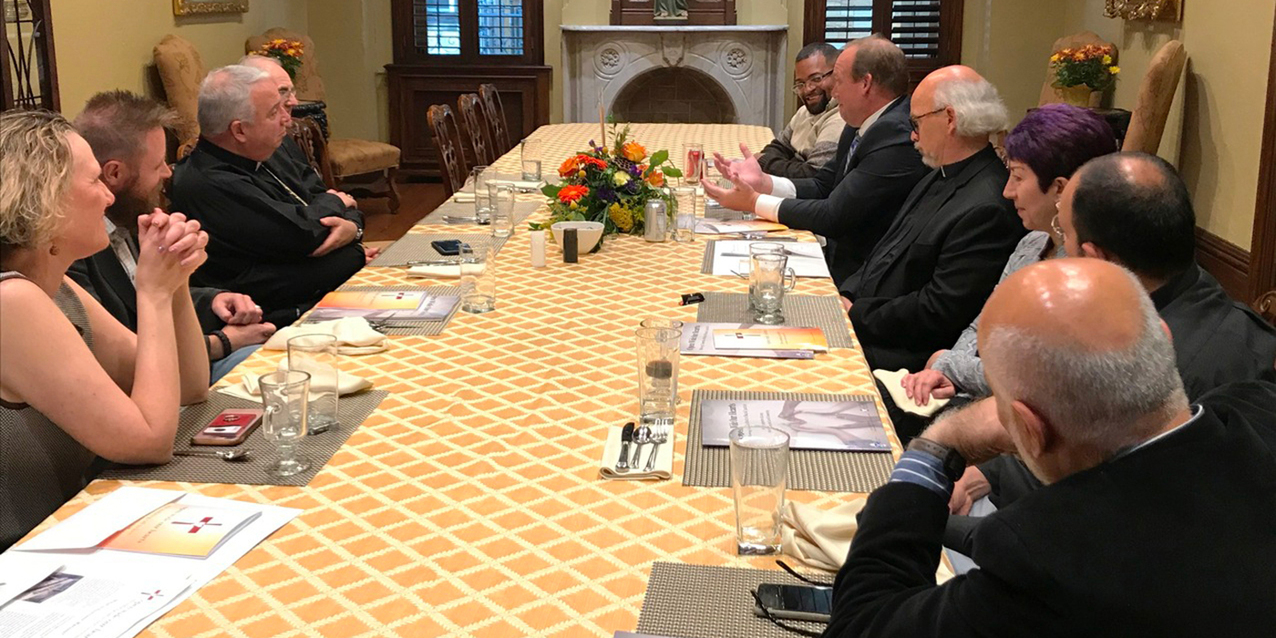 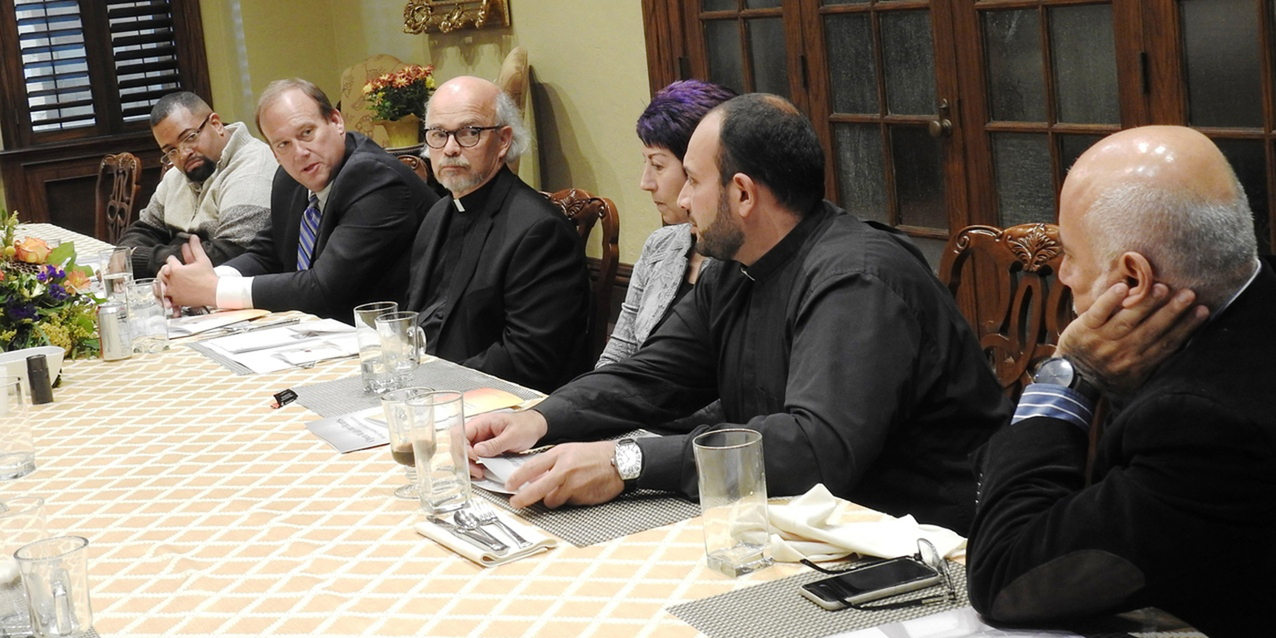 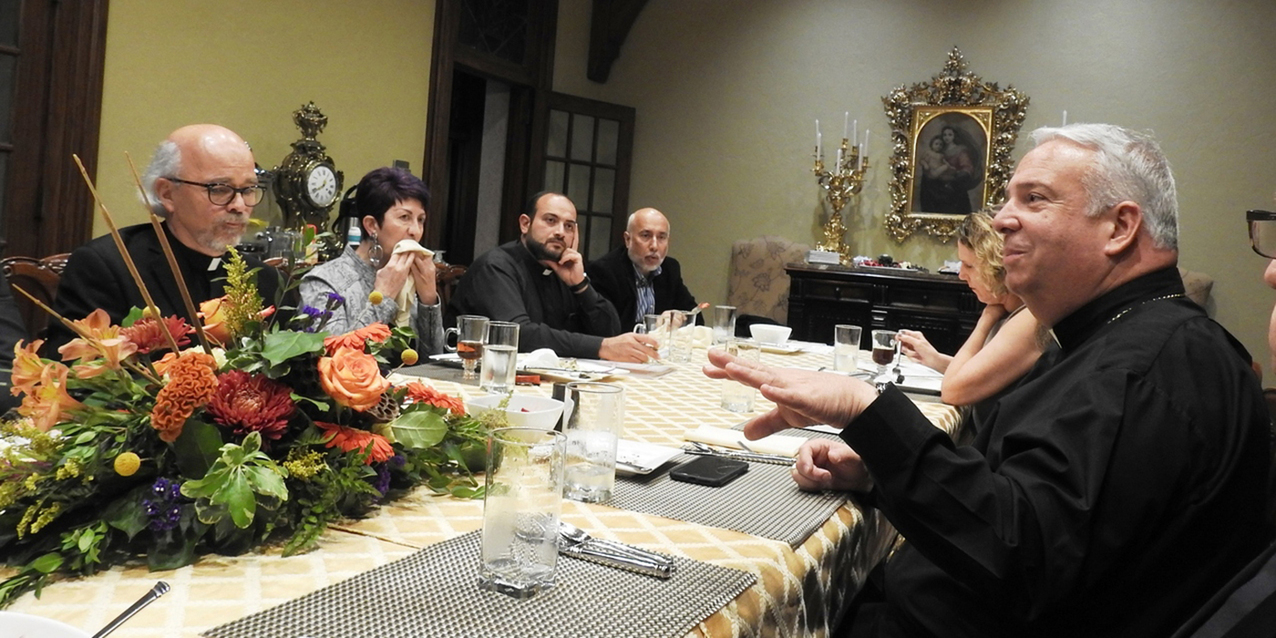 Several leaders of various faith communities in Greater Cleveland took time on Oct. 8 to join Bishop Nelson Perez for a lunch meeting and discussion at his residence, the rectory at the Cathedral of St. John the Evangelist in downtown Cleveland.

Members of the ecumenical group gather a few times during the year to discuss issues of common interest and to build relationships among their faith communities. Father Joseph Hilinski, pastor of St. Barbara Parish in Cleveland and diocesan delegate for interfaith and ecumenical affairs, coordinates the gatherings.

Over lunch, the group chatted about a variety of issues in the country and globally that affect their congregations and the community in general. They also asked questions of Bishop Perez in order to better understand how the diocese functions and his role as bishop. Since he just marked two years as spiritual shepherd of the Cleveland Diocese, the bishop updated the group on what he’s done during his tenure to date.

“The cathedral is the mother church of the diocese,” he said, and he is its pastor. However, Father Sean Ralph is the cathedral rector and handles the operations of the cathedral parish. Bishop Perez said he has visited about 167 of the 185 parishes in the eight-county diocese, all 20 high schools – he’s starting to make return visits; about half of the elementary schools; the hospitals and many other social service providers, especially Catholic Charities sites. He said he enjoys visiting places throughout the diocese and meeting the people.

When asked about how he manages such a large diocese, the bishop credited Auxiliary Bishop emeritus Roger Gries, Bishop Martin Amos, retired bishop of Davenport and a native of the diocese who returned here after retiring, and Bishop emeritus Anthony Pilla with helping him. Benedictine Abbot Gary Hoover also assists with confirmations.

They asked if he would be getting an auxiliary bishop to help. The bishop said it’s a long process that involves permission from Rome, but the process is under way.

After lunch, Cary Dabney, who heads the diocesan Office of African American Ministry, provided an overview of the diocese’s recent daylong forum on racism, “Open Wide our Hearts,” named after a pastoral letter issued by the United States Conference of Catholic Bishops. The event included a listening session attended by representatives of the USCCB Ad Hoc Committee Against Racism. Dabney also is a writer for the ad hoc committee.

He briefed the group on how the USCCB and the Church are working to combat racism, noting the release of “Open Wide our Hearts” offers assistance on how dioceses can advocate and respond to the issue. He said the document can be read online.

“We must recognize the issue and dismantle racism,” Dabney said, adding that there are three sections in the pastoral letter -- justice, goodness and walk humbly with God – which are taken from the Old Testament and offer ways to deal with racism in the Church and beyond. He said several people from across the diocese shared their experiences with racism at a USCCB listening session that was part of the forum. Others from the diocese are invited to send their stories to Dabney. The information will be compiled, shared with the bishop and USCCB and next steps will be drafted to help parishes continue to combat racism.

Dabney explained that much change has taken place in the schools in recent years. Thanks to availability of vouchers and other funding, a number of non-Catholic students are attending schools in the diocese. This necessitated some changes in the way teachers are trained, Dabney said, “Since they aren’t just teaching Catholic students. There are many students who are not ‘typical’ Catholic students in our schools.”

Members of the interfaith group asked many questions about the pastoral letter, the forum and the next steps, as well as sharing their thoughts on racism and how it affects their congregations.

The imam said it’s a problem permeating society, noting that many mosques in Greater Cleveland are segregated – not to be intentionally racist, but because of immigration, people choosing to worship with others from their national background, language and other reasons. He said some mosques have no African Americans, while others have primarily black congregants. Also, at the mosques with a high immigrant population, there are not women leaders, while the opposite is true in the African American mosques.

Dabney said the racial unrest in Ferguson, Missouri in 2014 brought a heightened awareness of the racism issue. “Some people might have thought we’d put racism behind us, but that showed us we still had a lot to do.”

The USCCB was beginning to address the issue soon after the 2017 white supremacist/neo-Nazi rally in Charlottesville, Virginia during which a car intentionally was driven into a crowd and a woman was killed. Dabney said two USCCB committees were discussing the racism issue and their combined efforts led to “Open Wide our Hearts,” the enduring call to love – a pastoral letter against racism, which was approved by the USCCB at its November 2018 fall meeting.

Dabney said there are advisory committees within the diocese for African Americans, Hispanics and Asians, all of which are providing input as the diocese works to promulgate a plan going forward to combat racism. “The pastors can’t do it alone,” he said.

The other faith leaders commended local Church leaders and the USCCB for tackling the racism issue. They asked if Dabney would be willing to address their congregations and he agreed. He also noted that the diocese has a Social Action Office that is working on the issue.

“We need to put our religious differences aside and work to combat this common problem,” the imam said. “It is a blessing to have a gathering like this where we can focus on our commonalities.”