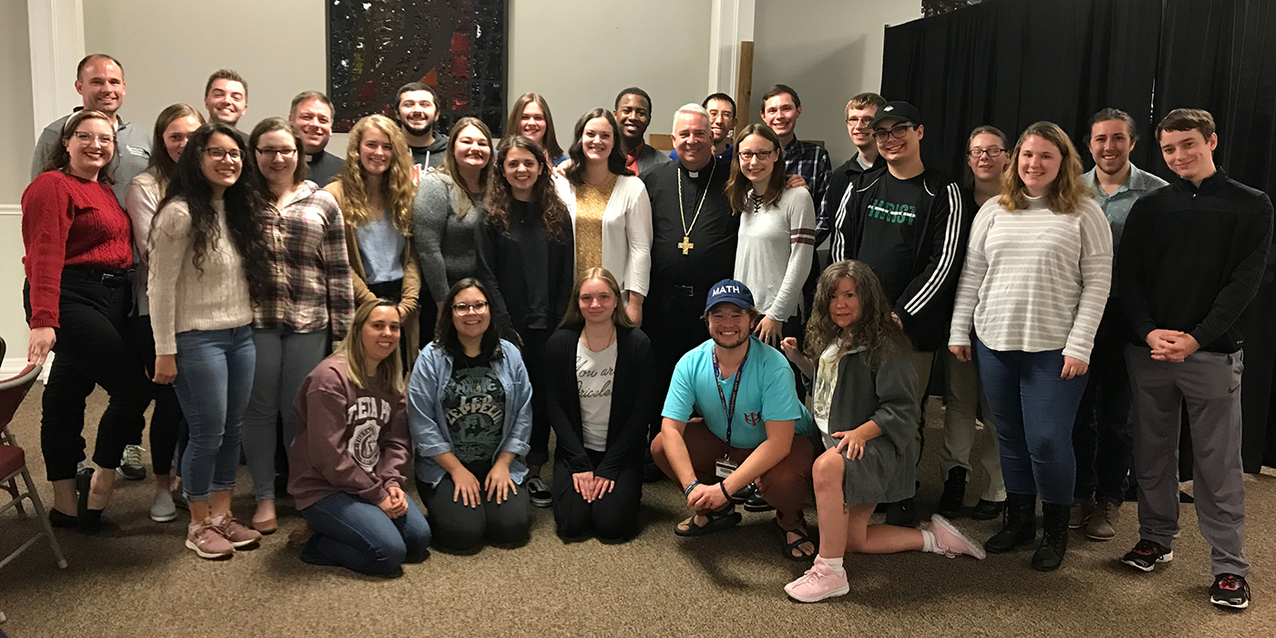 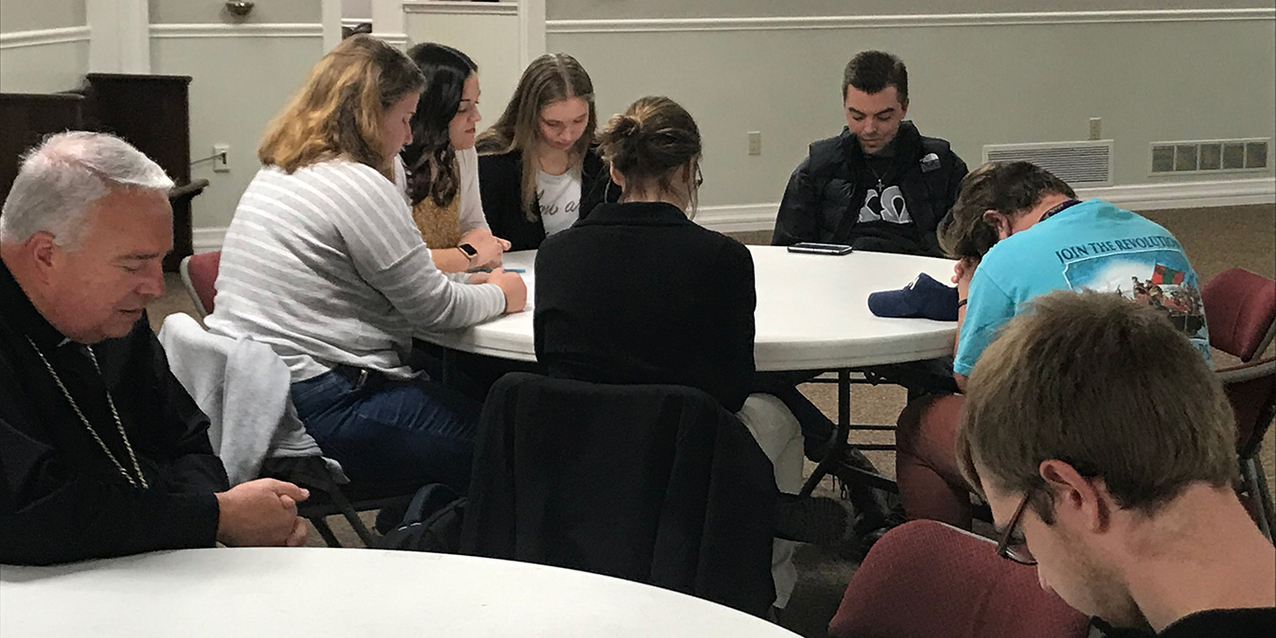 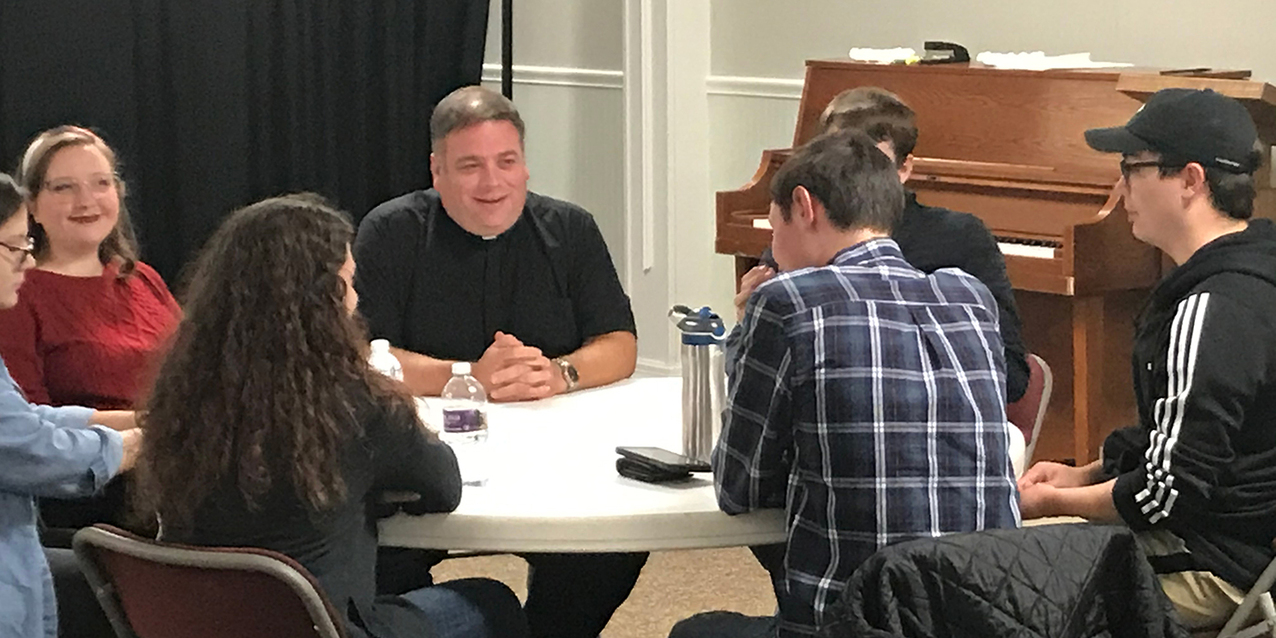 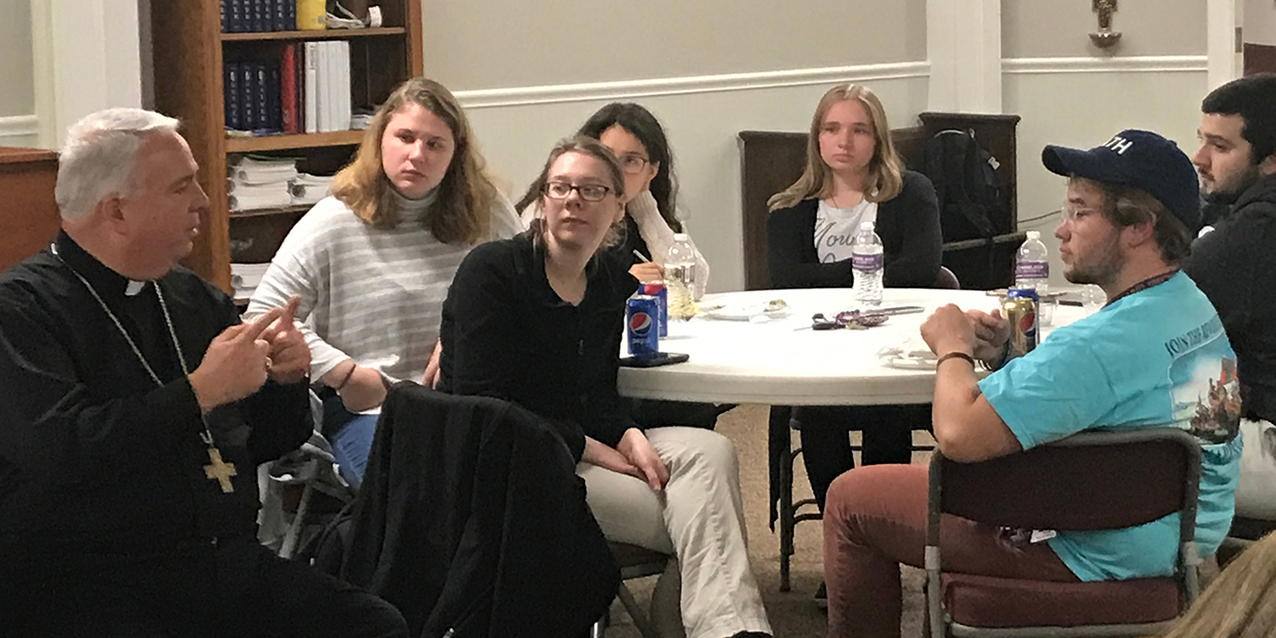 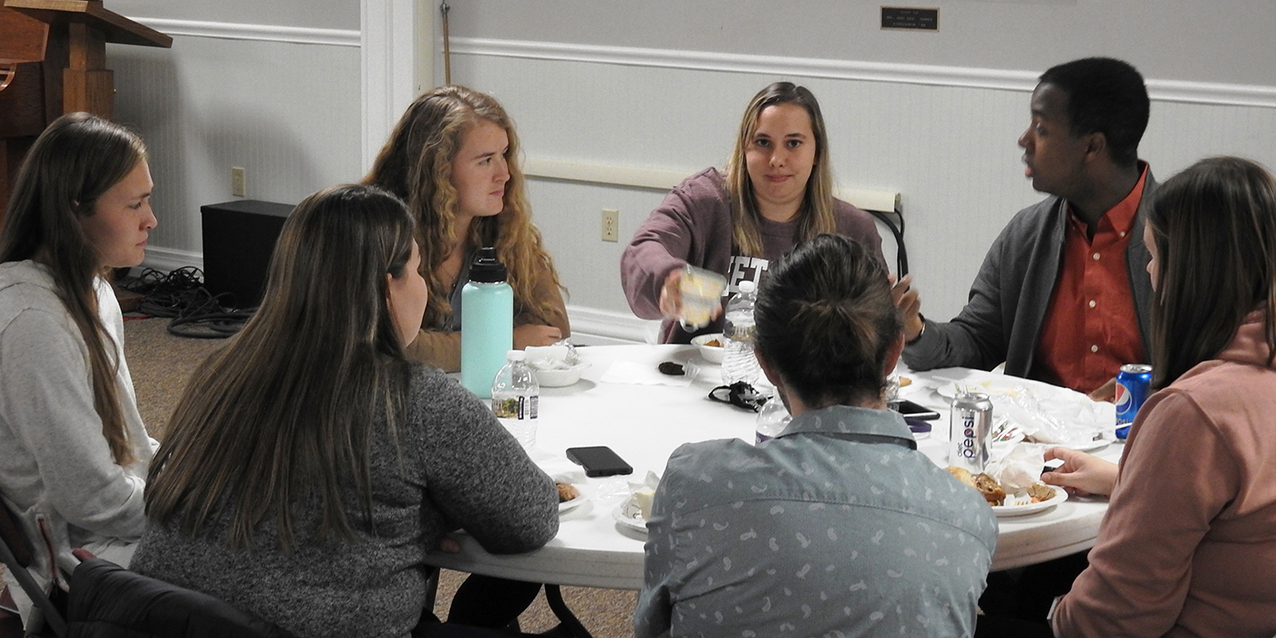 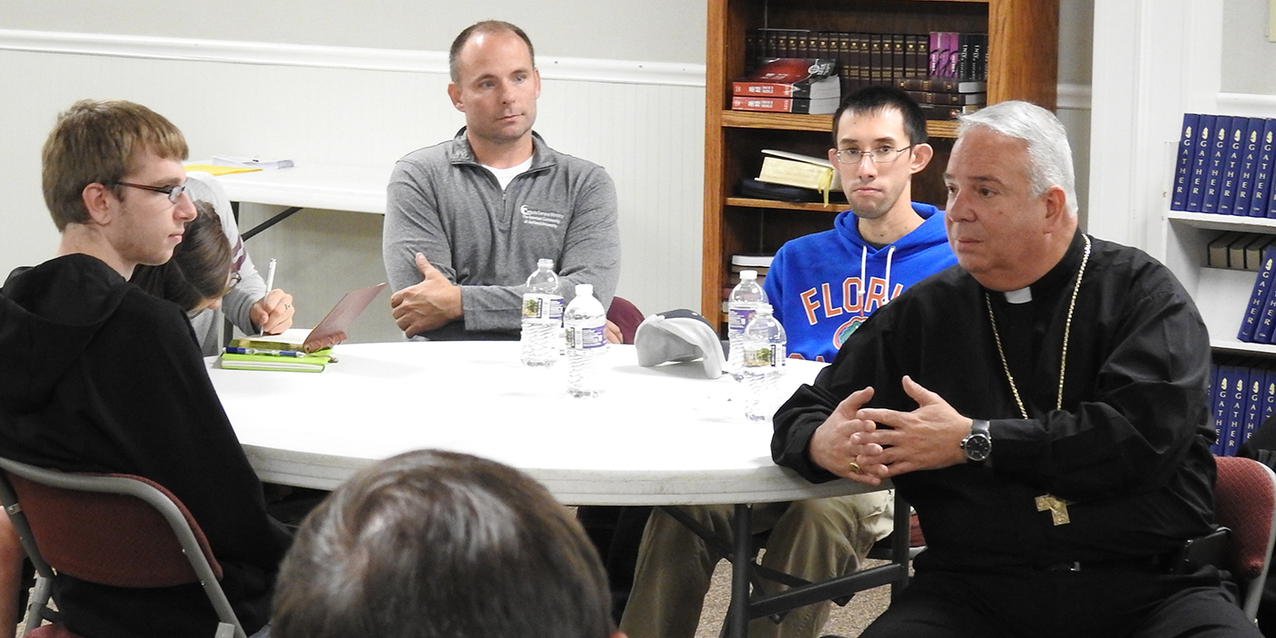 As they concluded a four-week series of discussions on living lives of holiness and “Me, a saint?” members of the Catholic Campus Ministry, the Newman Community at Ashland University heard from a special guest: Bishop Nelson Perez.

The program came the day after St. John Henry Newman, after whom the campus ministry program is named, was canonized in Rome. The Catholic Diocese of Cleveland celebrated his canonization with a Mass at the Cathedral of St. John the Evangelist on Oct. 13 that was attended by many Newman Ministry students from around the diocese.

The bishop traveled to the campus on Oct. 14 to have dinner with about two dozen students, Nate Ediger, the campus minister, and Father Vince Hawk, Ashland University chaplain and director of Newman Campus Ministry for the diocese. After dinner, the group spent about an hour discussing the topic and asking the bishop questions.

Bishop Perez asked the students what they had learned in previous discussions. One student said they can’t love themselves without knowing themselves – and they can’t know themselves without knowing God. Another talked about how knowing and loving yourself helps to spread God’s love – in a pyramid-like way. Spiritual multiplication comes from a happy poverty, another said and yet another student said they discussed the difference between natural talent and charism.

He asked them what their mission begins with, which prompted replies of spreading God’s love as word, their vocation and being the persons God created them to be. The bishop also reminded them that strong faith is essential to being a missionary. In fact, he said a recent daily Gospel reading pointed out that if someone has faith the size of a mustard seed, that person could direct a mountain to move.

The roots of the word faith come from a Greek word meaning trust and from an Aramaic and Hebrew word, he said. “Faith is belief in that which you don’t see. It speaks of a relationship with God rooted in profound trust,” Bishop Perez said. And it is lived out through presence and dialogue, he added.

The bishop also talked about friends, noting they do two things: spend time with each other and talk to each other. He shared some stories about friendship and encounter, explaining that lengthy conversations aren’t always necessary. “The same is true about our relationship with the Lord,” he said.

“Sometimes people get so excited, they want to share the news of a relationship,” he said. The life of a disciple begins with a relationship -- an experience or encounter with the risen Lord -- and it grows from that.

“The genesis of Christian life is a relationship with Christ and nothing makes sense without that,” Bishop Perez said. Holiness and mission are all connected and nurtured through the sacraments, he said, and only someone who has had the privilege of that encounter with the Lord would be willing to give their life for him. He mentioned the bones of St. Christine, a young martyr from the third century, that are displayed at the cathedral. Her parents wanted her to marry someone and she refused, so she was tortured and killed – dying for her faith, he said.

“That’s where the heart of a missionary begins – with that relationship with Christ,” Bishop Perez said. “You can’t be a missionary disciple without encounter and vice versa. A community of missionary disciples takes initiative. They are like yeast that goes into a ball of dough and makes it rise.”

He said missionary disciples encounter, accompany, are fruitful, have passion and are joyful.

He shared a personal story from years ago when his father was diagnosed with leukemia and the encounter he had with a stranger outside the hospital. They had only a brief conversation, but Bishop Perez said the woman was like a missionary to him. She asked him what he had read lately, and he told her he recalled reading a Bible passage that morning saying “Do not be afraid.” The woman reminded him that he had the doctor’s words – saying his father wouldn’t live much longer – on one side and God’s word on the other side.

“Which word will you put your stock in?” she asked him. “I never saw her again. And she was right,” he said, noting that his father died last fall at age 92 – many years after his diagnosis -- and not from leukemia. “She was a missionary disciple. She accompanied me,” he added.

The bishop fielded several questions from students, advising them not to let fear rule their lives as they prepare for graduation, graduate school and their careers.

They also discussed what it’s like to share their faith today, with one student noting it can be very lonely and they can face challenges. The bishop said faith depends on a person’s relationship with Christ. He said the Holy Spirit works through us – we just have to let it happen. In fact, he often reminds people that “God works in us, through us and sometimes despite us.”

Bishop Perez said the Church has weathered many storms in its 2,000-plus years of existence. “It’s amazing that it’s been around such a long time, despite so many things we’ve done to try and destroy it,” he said. “You are a sign of hope to me,” he told the students. “Don’t let fear rule your hearts.”