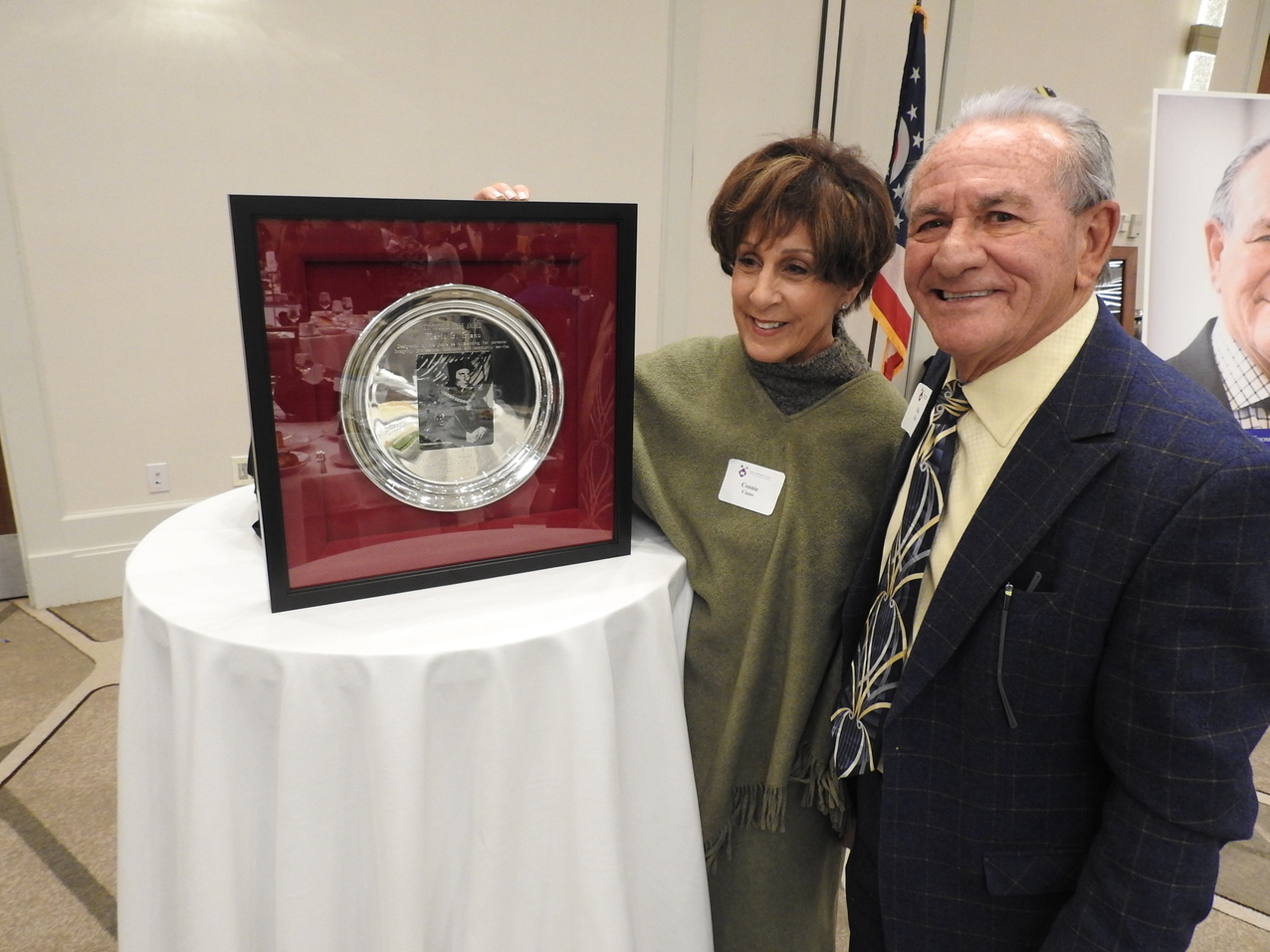 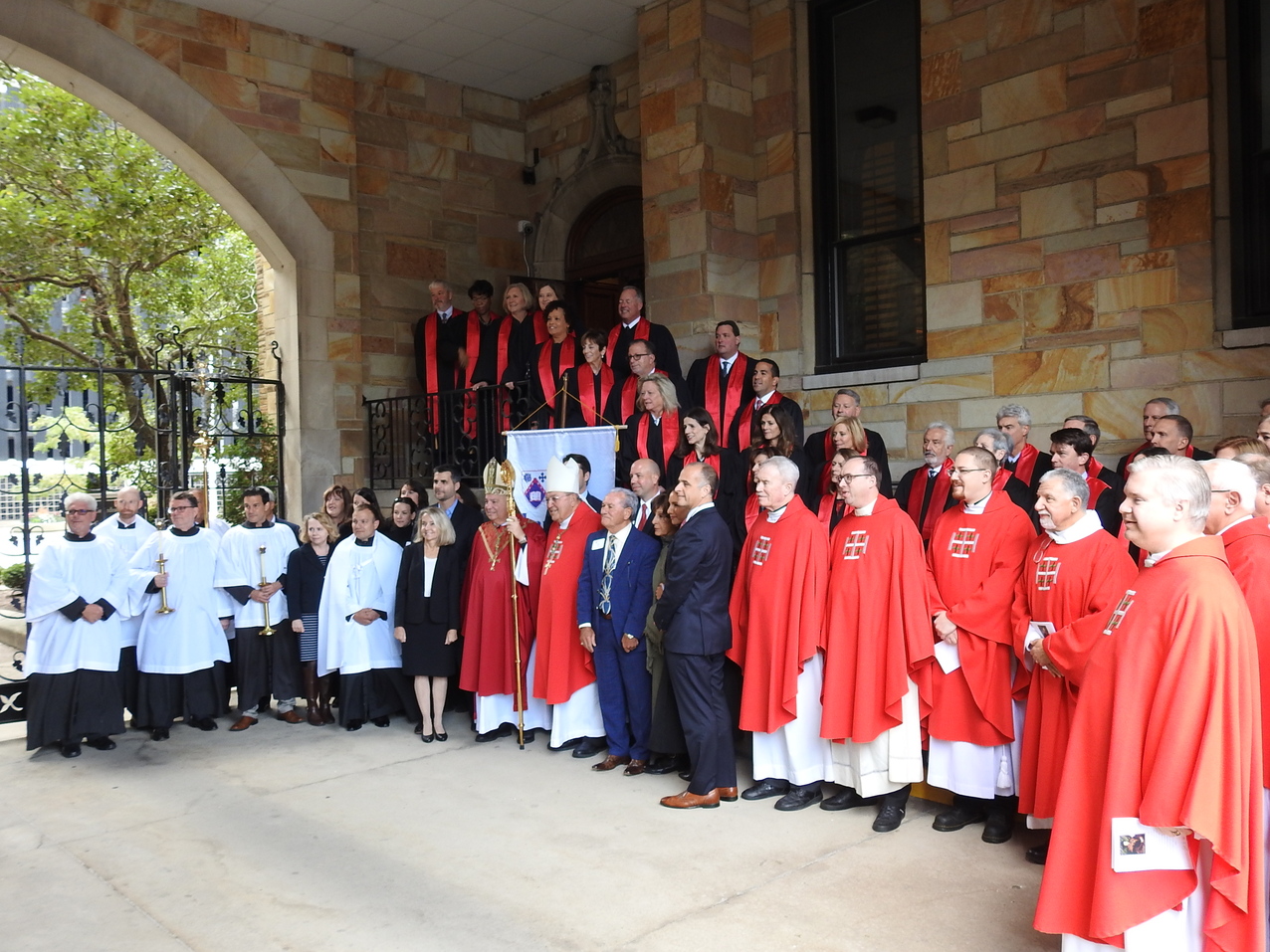 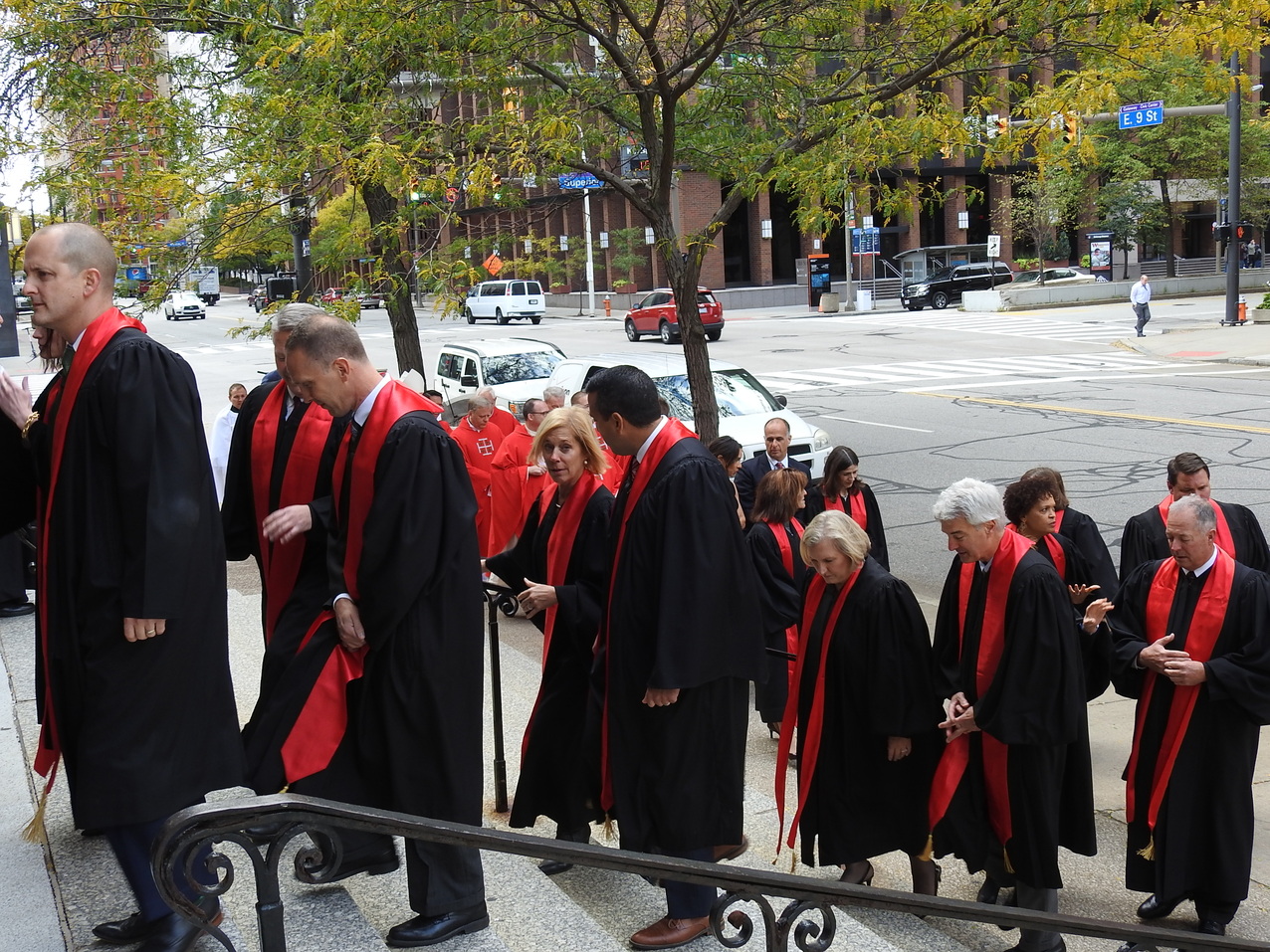 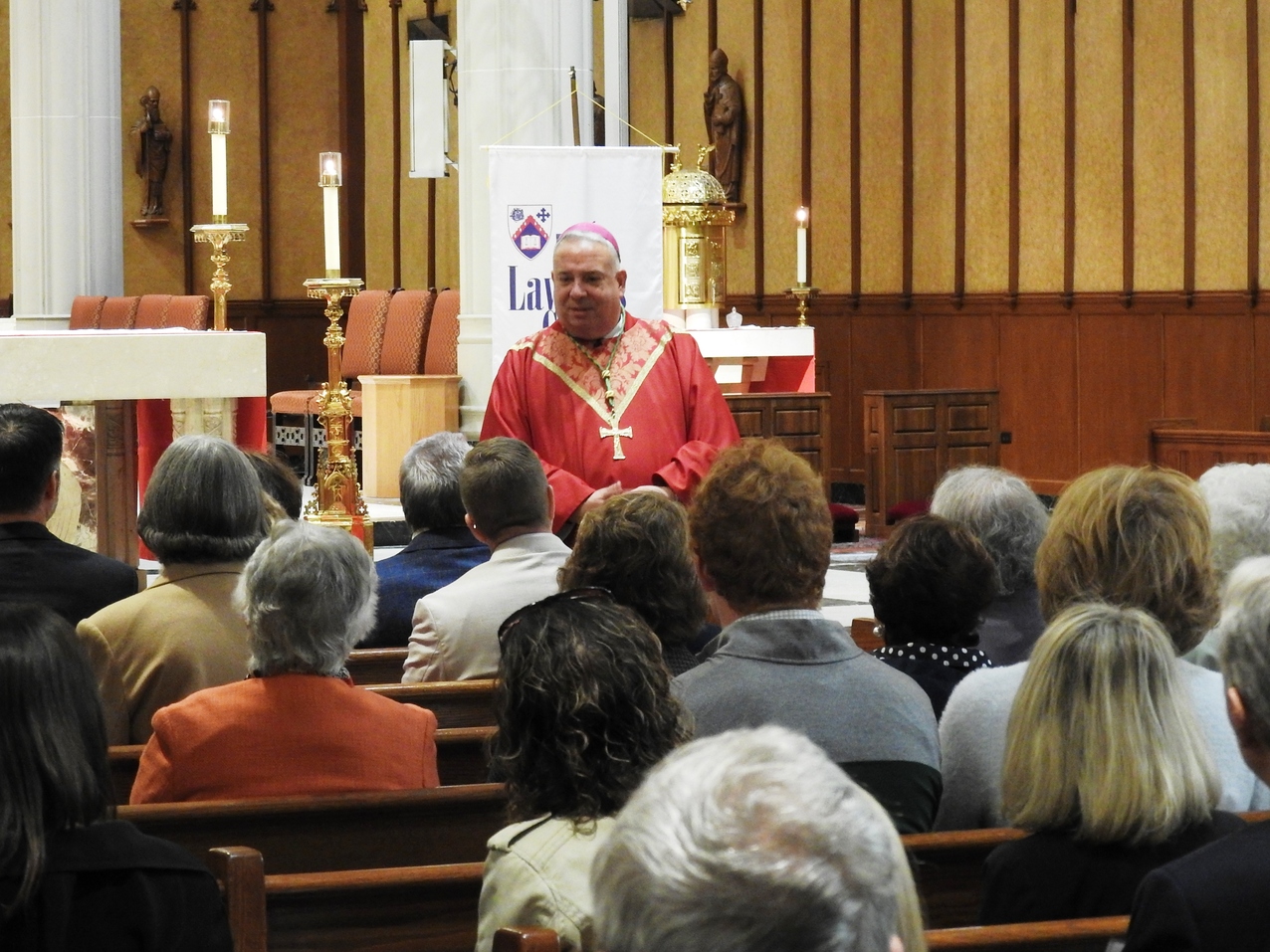 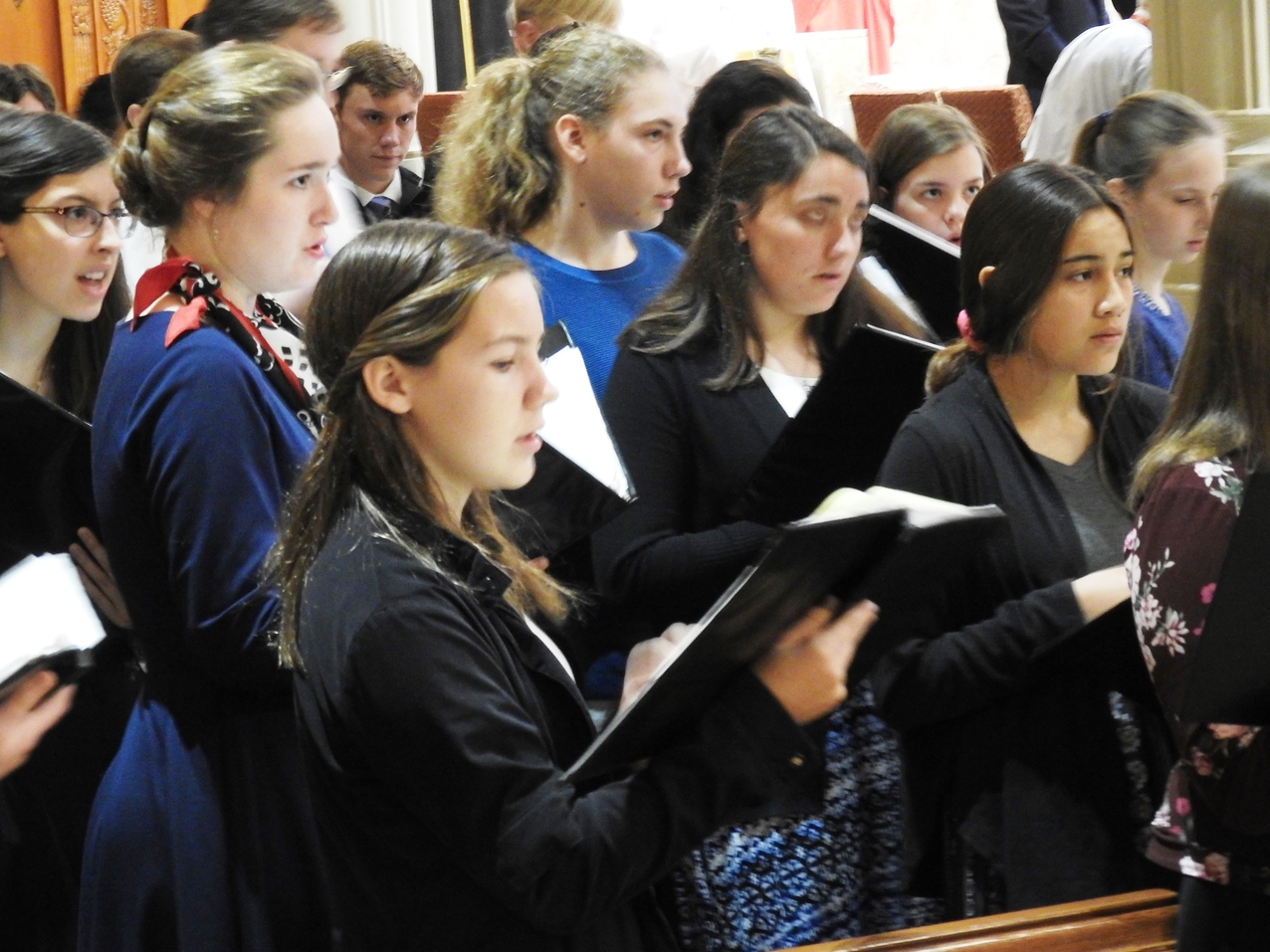 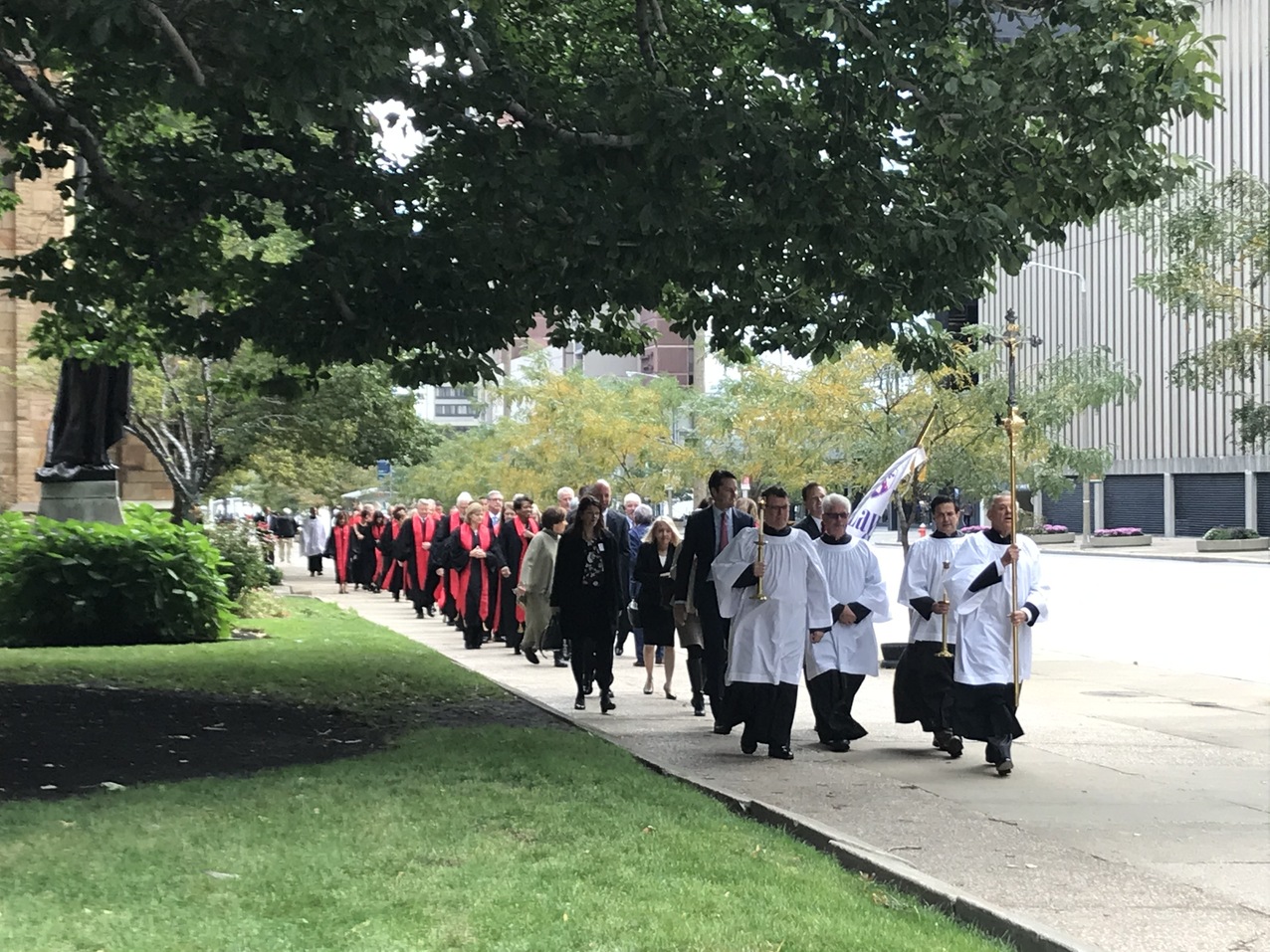 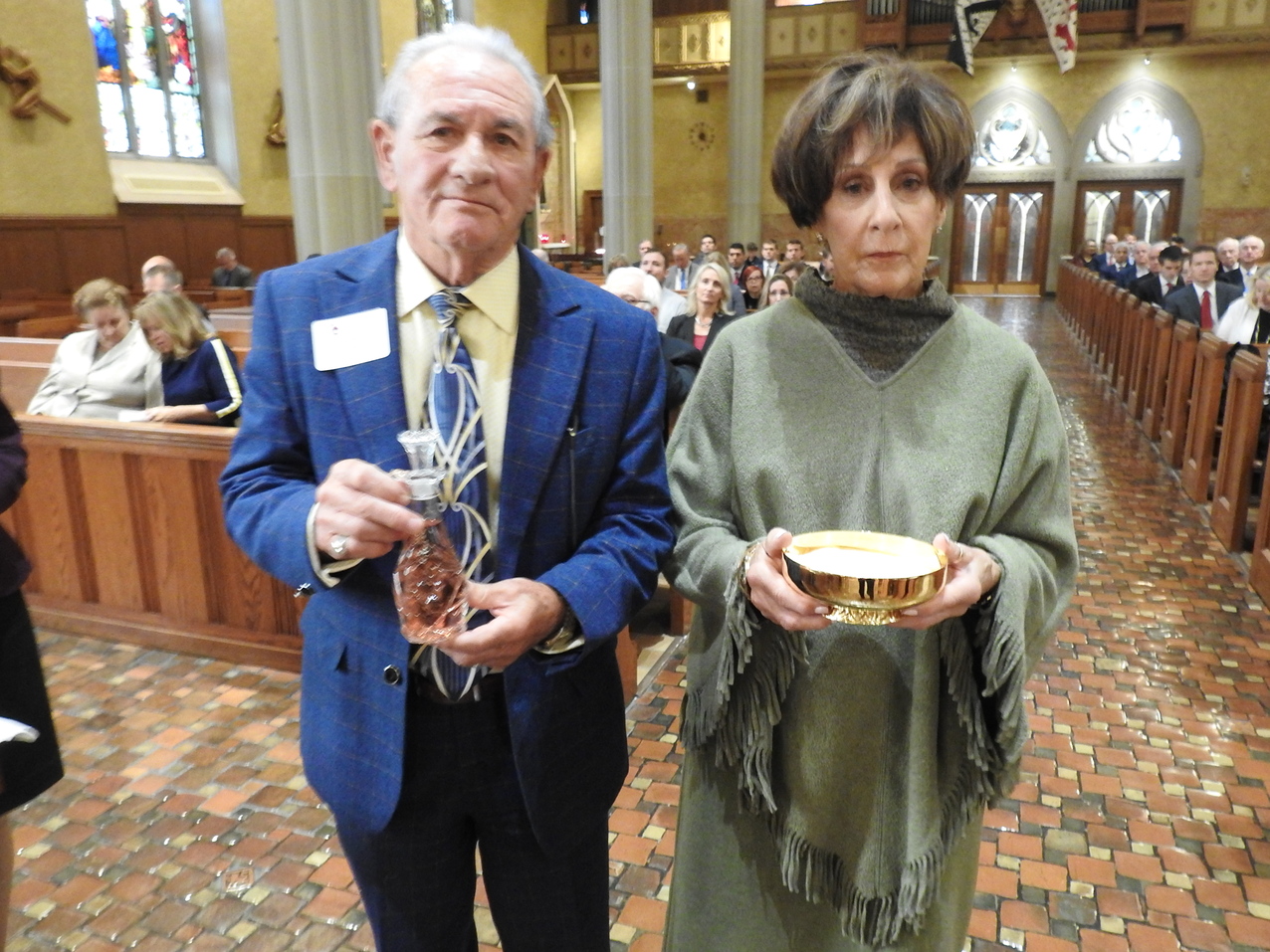 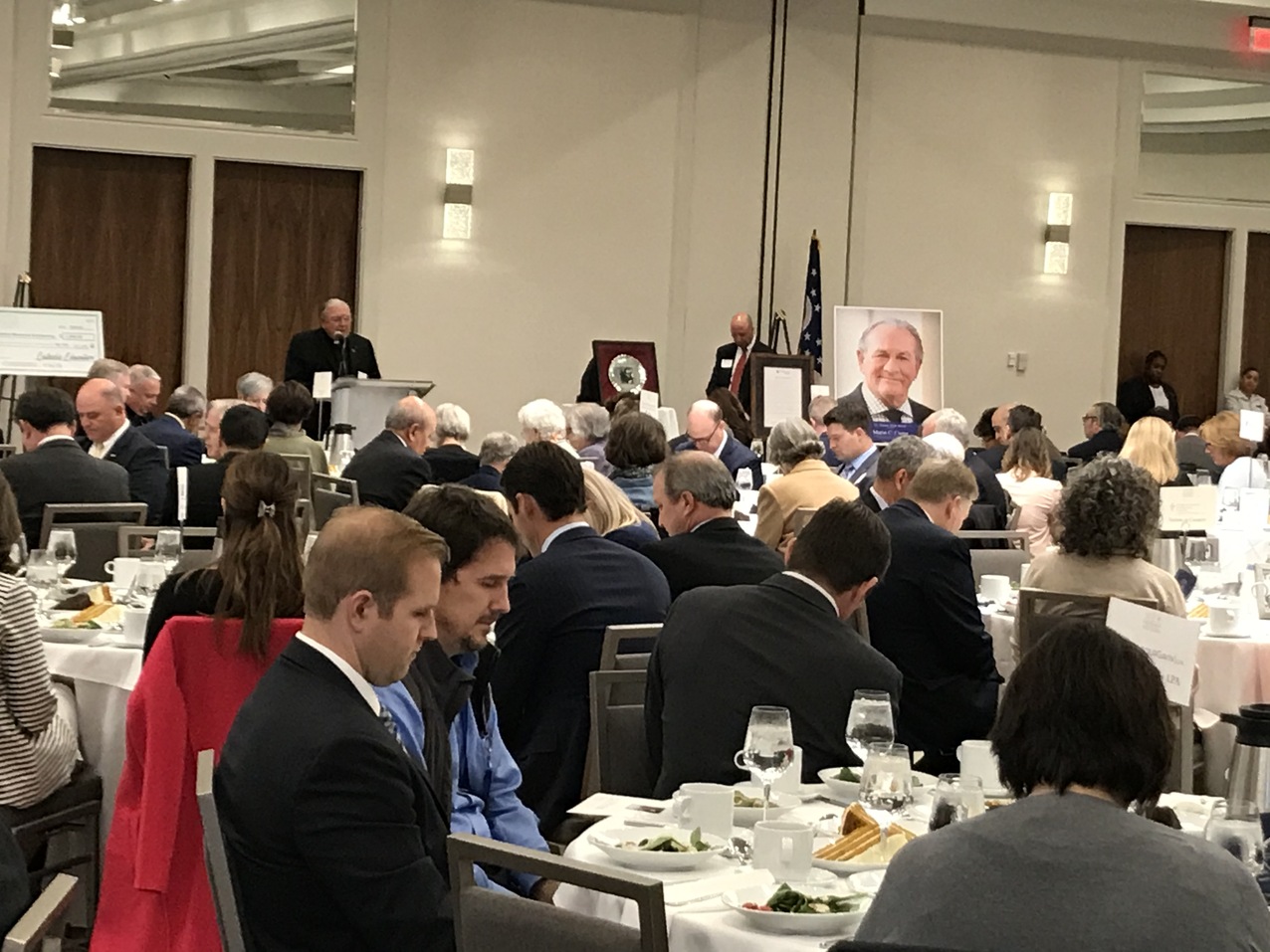 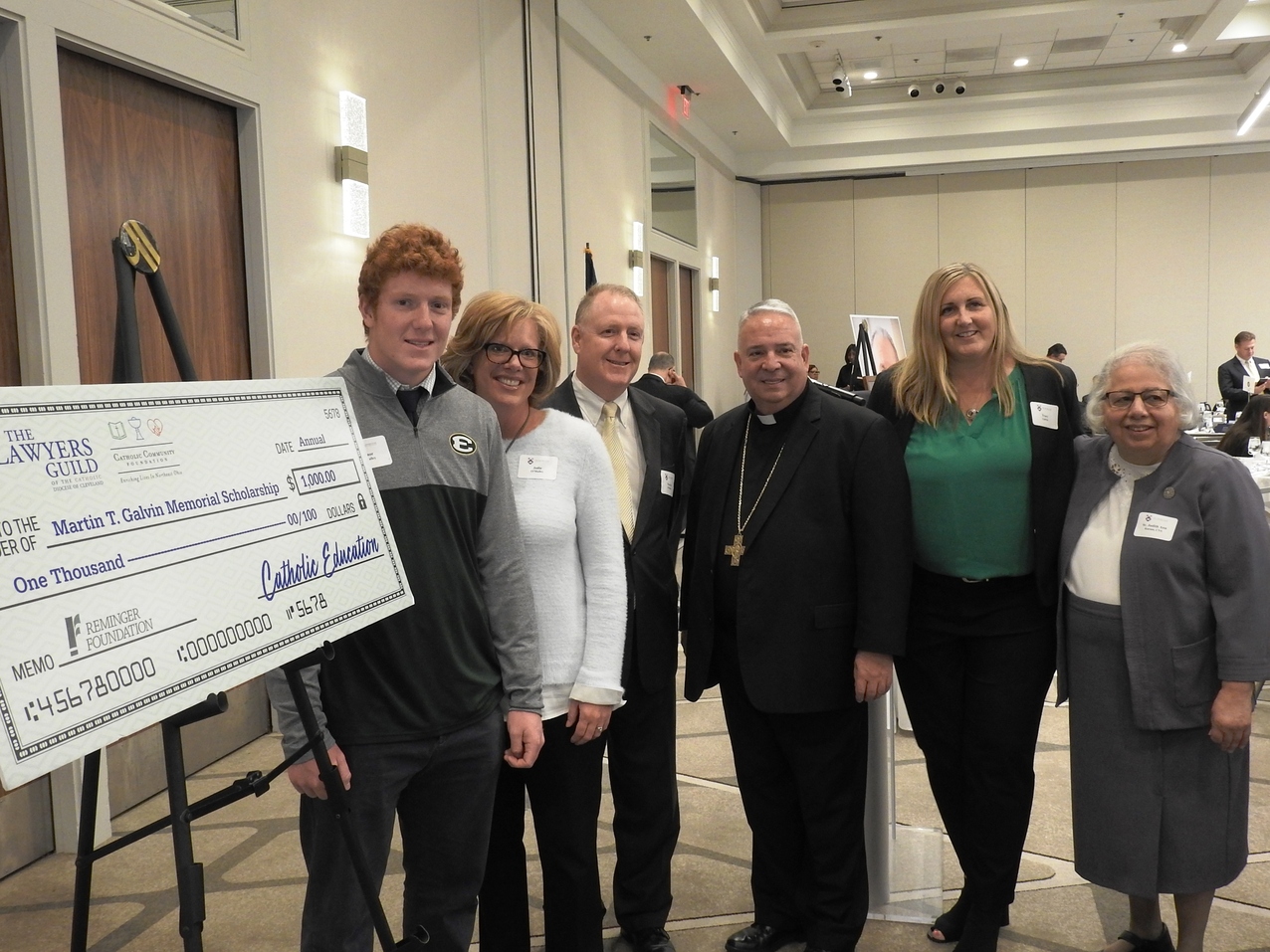 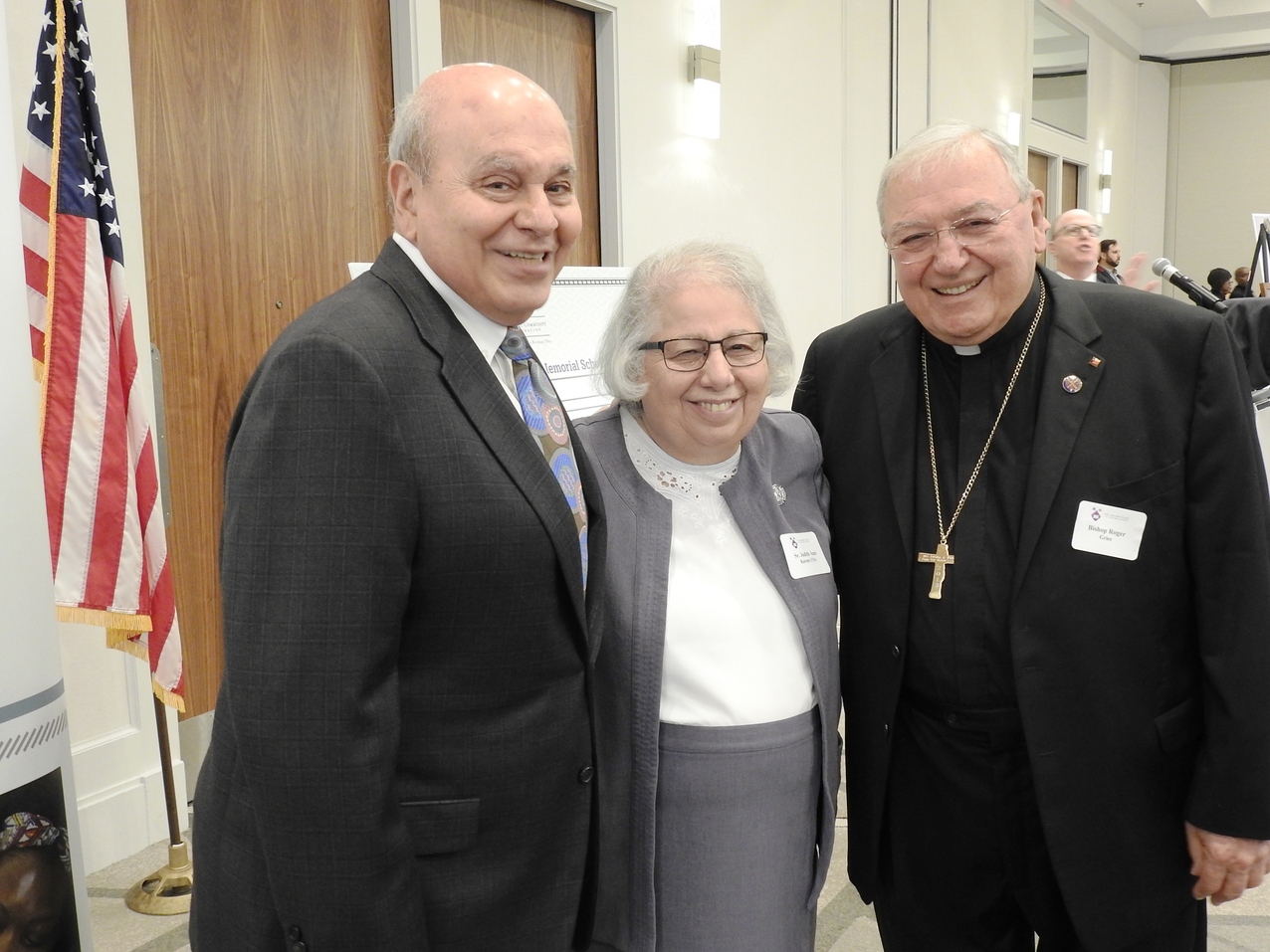 Members of the Lawyers Guild of the Catholic Diocese of Cleveland attended the annual Red Mass on Oct. 18 at the Cathedral of St. John the Evangelist. Bishop Nelson Perez was the celebrant. Auxiliary Bishop emeritus Roger Gries concelebrated along with Father Gary Yanus, diocesan judicial vicar, and several other priests who work in the tribunal. The Lyceum Schola Cantorum, under the direction of Mark Langley, sang at Mass. Members of the legal community assisted as acolytes, miter and crosier bearers.

The Red Mass in Cleveland traditionally occurs near the beginning of the U.S. Supreme Court session, which begins in early October.

Bishop Perez noted that Oct. 18 was the feast of St. Luke the evangelist, who was noted for three things: remembering, praying and mission.

“We remember every time we celebrate the Eucharist,” he said, pointing out the bread and wine cease to be those things and become the body and blood of Jesus Christ. He also asked members of the legal community in the congregation to pause and remember what it was that drew them to their profession. “Why did you become lawyers?” he asked. “Somewhere in your heart you felt the call to serve. But sometimes people and things get in the way and we forget where it all began.”

The bishop said Mario Ciano, who was being honored with the St. Thomas More Award, never forgot what was important in his life: faith, family and work. “That was his mantra,” Bishop Perez said.

Noting that he often goes to the wellspring where he felt the call to his vocation, the bishop shared a story of a mosaic commissioned for a seminary chapel in another diocese in which some of the bishops of that diocese are interred. The artist decided to depict the last judgement, showing human bones with a miter and a broken crosier – symbols of a bishop – in the midst of the bones. Bishop Perez said the artist showed that at the end of time, “That stuff is not important; it doesn’t matter. It’s what you did with ‘that stuff,’ with your life that matters. I wasn’t born a bishop. I was baptized as a disciple of Christ. What did you do with the gifts that you were given?” he asked. “That’s what really matters at the end of time.”

Recently, Bishop Perez said he spent a day in court observing the operations. “It’s not like on TV. I saw compassion. The judges and staff had to make decisions – they had many choices to make. They want to do good,” he added.

The second thing St. Luke is known for is prayer. We should go before the Lord often and ask him for help, the bishop said, “Pray. Understand there’s a power before us.”

St. Luke’s third attribute is mission. “Ultimately, all missions go to one thing – the mission of God,” the bishop said.

After Mass, the group gathered in the ballroom at the Cleveland Marriott Downtown at Key Center for the St. Thomas More Award Luncheon hosted by the Lawyers Guild.

During the luncheon, the prestigious St. Thomas More Award was presented to. Ciano, former managing partner of Reminger Co., LPA. Ciano has appeared annually for 25 years in the Best Lawyers in America for Defendants in Personal Injury Litigation, and he recently received the 2018 William K. Thomas Professionalism Award from the Cleveland Metropolitan Bar Association.

Ciano was brought to the United States at age 9 after World War II by Catholic Charities. He spent time at the former Parmadale until his adoption.

Ciano earned his law degree from Western Reserve University. Already a law clerk at Reminger, he was a managing partner there by 1992. He initiated and oversaw the firm’s expansion from two offices with 45 attorneys to eight offices with more than 125 attorneys.

Ciano is a member of the board of advisors for Lake County Birthright, which helps women in crisis pregnancies. He has shared the Gospel with Ohio inmates as a True Freedom Ministries volunteer and helped the poor in Africa on several mission trips. His most rewarding service has been facilitating dozens of private placement adoptions pro-bono.

“I married the love of my life 54 years and 91 days ago,” he said, noting that he and Connie lived about 1,000 feet apart when growing up. They are the parents of six children and have 17 grandchildren. Members of Our Lady of Mount Carmel in Wickliffe for more than 40 years, the couple has volunteered as Pre-Cana leaders and RCIA educators.

The Lawyers Guild also presented a Special Recognition Award to Sister Judith Ann Karam, CSA, congregational leader of the Sisters of Charity of St. Augustine, for her extraordinary service and Catholic witness, as well as to the CSA Sisters, the Sisters of Charity Health System, and their many co-ministers for their dedication to the most vulnerable, outstanding commitment to the Roman Catholic Church and exceptional service that they and their ministries provide for the betterment of individuals, families and communities of the greater Cleveland area.

The CSAs have been serving the needy and suffering in the Cleveland area since 1851. Their health system now comprises two Catholic hospitals (one, the nationally recognized St. Vincent Charity Medical Center in Cleveland), three grantmaking foundations, two elder care facilities, and six health and human service outreach organizations in Ohio and South Carolina.

Sister Karam thanked those who helped make the ministries of the CSAs possible, including the many lay people who she said serve as “the heart and hands of our ministry. It is our calling to follow Catholic social teaching. To find meaning for the present and hope for the future,” she said. “In all things charity. Our charism is to freely give to all we serve.”

The final presentation at the luncheon was the Martin T. Galvin Memorial Scholarship to St. Edward High School senior Conor O’Malley. The annual scholarship was established in 2018 in memory of the late Galvin, a Reminger partner and past president of the Cleveland Lawyers Guild, who had passed away earlier that year. It is designed to assist families of the legal community who desire a Catholic education for their children.

Conor, quarterback for the St. Edward Eagles football team, took some good-natured ribbing from Brian Sullivan, Lawyers Guild president and a St. Ignatius High School alumnus, because St. Edward defeated St. Ignatius in football. “If we play you again, take it easy on us,” he quipped.

In addition to playing football, Conor is on the St. Edward baseball team and he is a member of the Fellowship of Christian Athletes. He is the son of Jodie and Patrick O’Malley. His father is an attorney with Keis George LLP.

For more information on the Lawyers Guild, click HERE.