Kind, supportive and dedicated to the people of the Catholic Diocese of Cleveland are some of the ways Bishop emeritus Richard Lennon is being remembered. 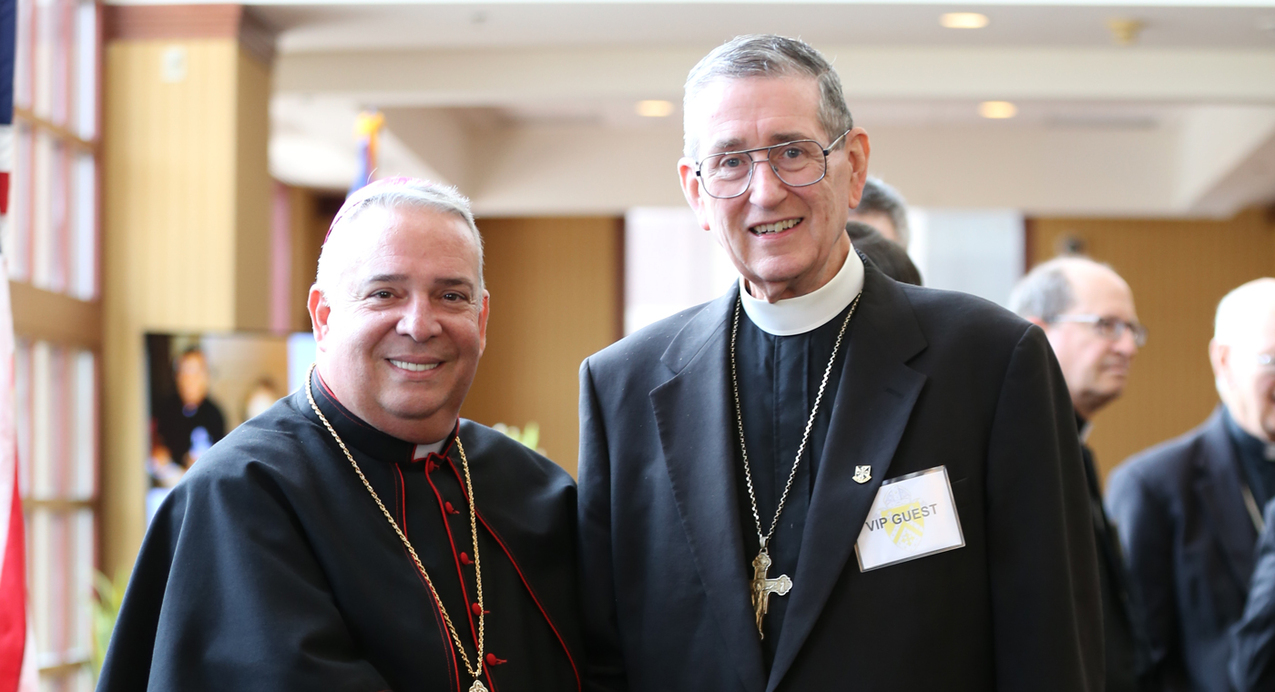 “In his service to the diocese, Bishop Lennon showed a deep dedication to the faithful governance of the diocese and a tremendous love of the Church and the people he shepherded. May the Lord grant him eternal rest,” said Bishop Nelson Perez, who succeeded Bishop Lennon in September 2017. 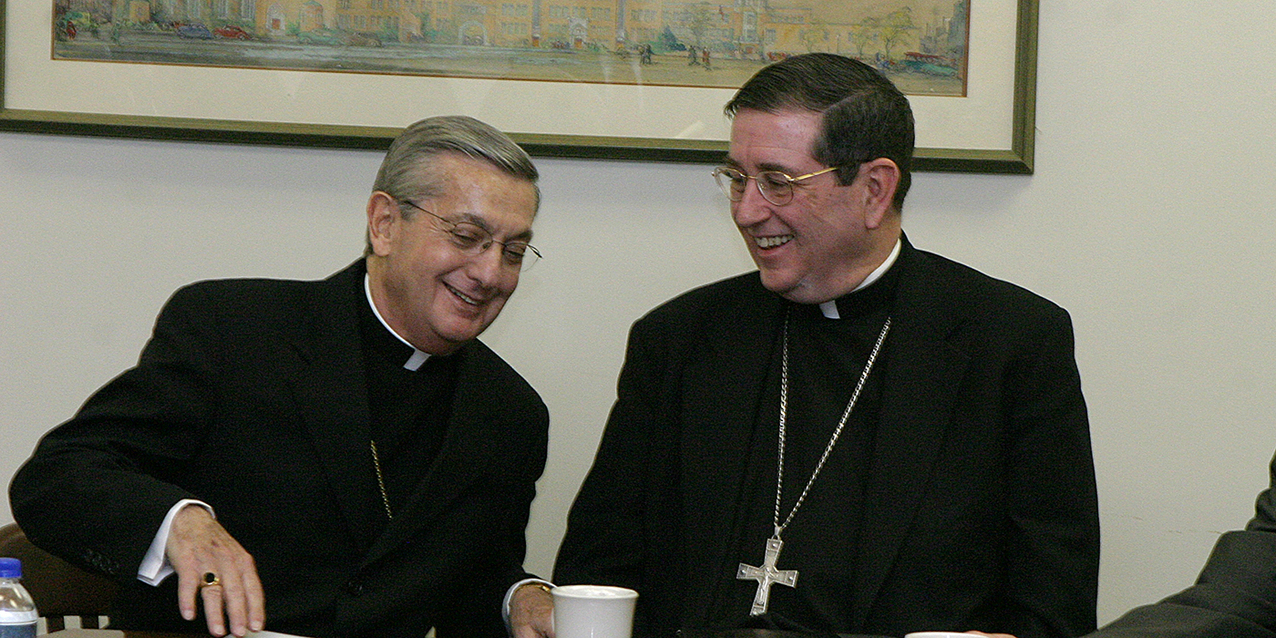 “I was saddened to hear of the death of Bishop Richard G. Lennon. I pray for his peace and eternal repose,” said Bishop emeritus Anthony Pilla, who preceded Bishop Lennon as leader of the diocese. “I am grateful for his dedicated service to this diocese and for all the good people who have given him such good care during his long illness.”

Bishop Milan Lach, bishop of the Byzantine Catholic Eparchy of Parma, also sent his condolences and said he would keep Bishop Lennon in his prayers.

A native of the Boston, Massachusetts area, Bishop Lennon was named by Pope Benedict XVI as the 10th bishop of Cleveland on April 4, 2006. He was installed on May 15, 2006 in the Cathedral of St. John the Evangelist to lead the country’s 23rd largest diocese with nearly 800,000 Catholics.

Bishop Lennon was a strong advocate for Catholic Charities in the diocese.

“He was totally supportive and willing to help spread our message to the parishes,” said Patrick Gareau, president and CEO, Catholic Charities, Diocese of Cleveland. Gareau credited Bishop Lennon with initiating the second appeal that has benefited Rose-Mary Center and its ministry to those with disabilities, increasing substance abuse programs and helping to fund disability services at Camp Christopher.

“I can’t even measure what he meant to Catholic Charities,” Gareau said.

During his episcopacy here, Bishop Lennon established a vision for the diocese that focused on evangelization with an emphasis on the Gospel. He wanted to ensure that the diocese had a way to communicate the evangelization message effectively with the faithful, so he made the difficult decision in July 2015 to close the diocesan newspaper -- the 141-year-old Universe Bulletin -- and launch a new magazine. Northeast Ohio Catholic magazine, which published its first issue in October 2015, is provided at no cost to about 240,000 households throughout the eight-county diocese and is the largest diocesan magazine in the country.

He also determined that the presence of the Church would remain in every setting where consolidation would reduce the number of parishes. The Church would be present in the Eucharist in liturgy, in Catholic education or in social service.

One of his priorities was visiting all parishes and schools in the diocese. After his installation, Bishop Lennon did just that, celebrating Mass and mingling with parishioners and students during each visit. He also enjoyed celebrating liturgies with the Asian Catholic, the Hispanic and African-American communities and visiting with the faithful during the receptions that followed.

As bishop, he ordained many new priests and deacons and celebrated hundreds of confirmation liturgies.

Bishop Lennon also had a fondness for the Daughters of St. Paul and invited them to perform their popular Christmas concert at the cathedral each year. He looked forward to greeting them when they arrived in town and often treated them to dinner at a local restaurant.

Sister Theresa Aletheia, DSP, shared this remembrance of the bishop’s time as chaplain for the order in Boston. “Bishop Lennon was a good friend of our community. Once during a terrible blizzard, the sisters were preparing for a Communion service when Father Lennon came riding up the hill on a snowplow. He was a good and holy servant of the Church. May he rest in peace and intercede for us.”

He also loved sports – especially baseball. The bishop enjoyed watching the Cleveland Indians play and made a friendly wager with Cardinal Blaze Cupich of the Archdiocese of Chicago in 2016 when the Indians met the Chicago Cubs in the World Series. Although the Cubs prevailed, both the diocese and archdiocese were winners because each made good on their promise to help feed the needy. The archdiocese sent a meal to the Bishop Cosgrove Center in Cleveland – which Bishop Lennon and Gareau helped to serve. The Cleveland Diocese reciprocated, with a local caterer driving to Chicago to prepare a meal at a facility there.

Bishop Lennon had a fondness for horses and made a point of offering a treat to the police horses whenever he saw them. One of the high points of his retirement reception was a visit by two members of the Cleveland police mounted unit.

In his capacity as leader of the diocese, he prioritized the institution of parish internal audits, diocesan school internal audits and the establishment of norms on models for Catholic schools and catechetical models for children. The Rooted in Faith capital campaign, which he launched, resulted in the donation of approximately $170 million to strengthen multiple facets of the diocese including parishes, the clergy retirement fund, evangelization efforts, the cathedral and Catholic schools throughout the diocese.

Phil Maynard of Akron, former chairman of the Catholic Community Foundation Board of Directors and founding trustee, the Maynard Family Foundation, has fond memories of the years he worked with Bishop Lennon during the Rooted in Faith campaign beginning in 2010.

“I had the honor and pleasure to get to know and work with him. He was a man of exceptional faith and had an extraordinary love for the Church,” Maynard said.

Bishop Lennon inherited a diocesan reconfiguration process that he continued with careful assessment by the parish clusters. The process also included review by the 31-member diocesan-wide Vibrant Parish Life Committee, the 13-member bishop’s staff and the 25-member Diocesan Presbyteral (priests) Council. Their recommendations to him resulted in the closing of 50 parishes and the establishment of 17 merged new parishes.

Bishop Lennon was born on March 26, 1947 in Arlington, Massachusetts. His father was the town’s deputy fire chief. He attended St. James the Apostle School in Arlington and was an altar boy at St. James Parish. In 1965, he graduated from Matignon, a Catholic high school in Cambridge, Massachusetts. For two years Bishop Lennon attended Boston College before entering St. John’s Seminary in Brighton, Massachusetts, from which he graduated in 1969 with a bachelor’s degree in philosophy. He also earned masters’ degrees in Church history and sacramental theology from St. John’s.

On May 19, 1973, he was ordained a priest for the Archdiocese of Boston. Bishop Lennon served the archdiocese as a parish priest, fire department chaplain, assistant for canonical affairs and rector of St. John’s Seminary. He was named a domestic prelate in April 1998 and was ordained an auxiliary bishop of Boston on Sept. 14, 2001. Bishop Lennon also served as apostolic administrator of the archdiocese from December 2002 to July 2003, when the Vatican appointed a new archbishop to lead Boston.

Pope Francis accepted Bishop Lennon’s resignation from pastoral governance of the Diocese of Cleveland on Dec. 28, 2016 and granted him early retirement. Bishop Lennon made the request in a letter to the pope in late November 2016, citing his ongoing health challenges as the reason for his decision to retire.

His wake will begin with vespers at 3 p.m. Nov. 4 in the Cathedral of St. John the Evangelist. Bishop Perez will be the presider and the homilist. The wake will continue until 7 p.m.

Bishop Lennon’s body will lie in state 8:30-10:45 a.m. Nov. 5 in the cathedral, prior to the funeral Mass. The Mass will be live streamed on the diocesan website.

Interment will be in the Resurrection Chapel at the Cathedral of St. John the Evangelist.