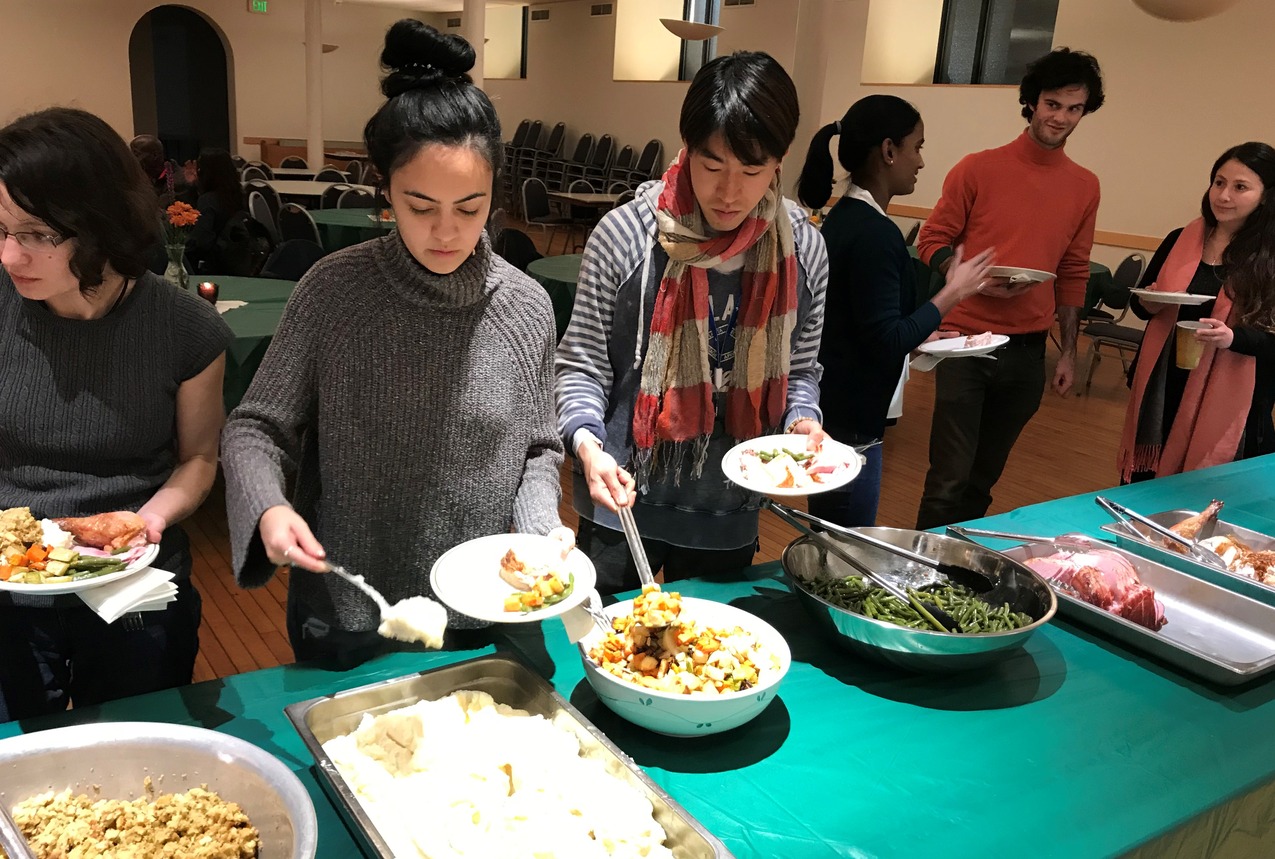 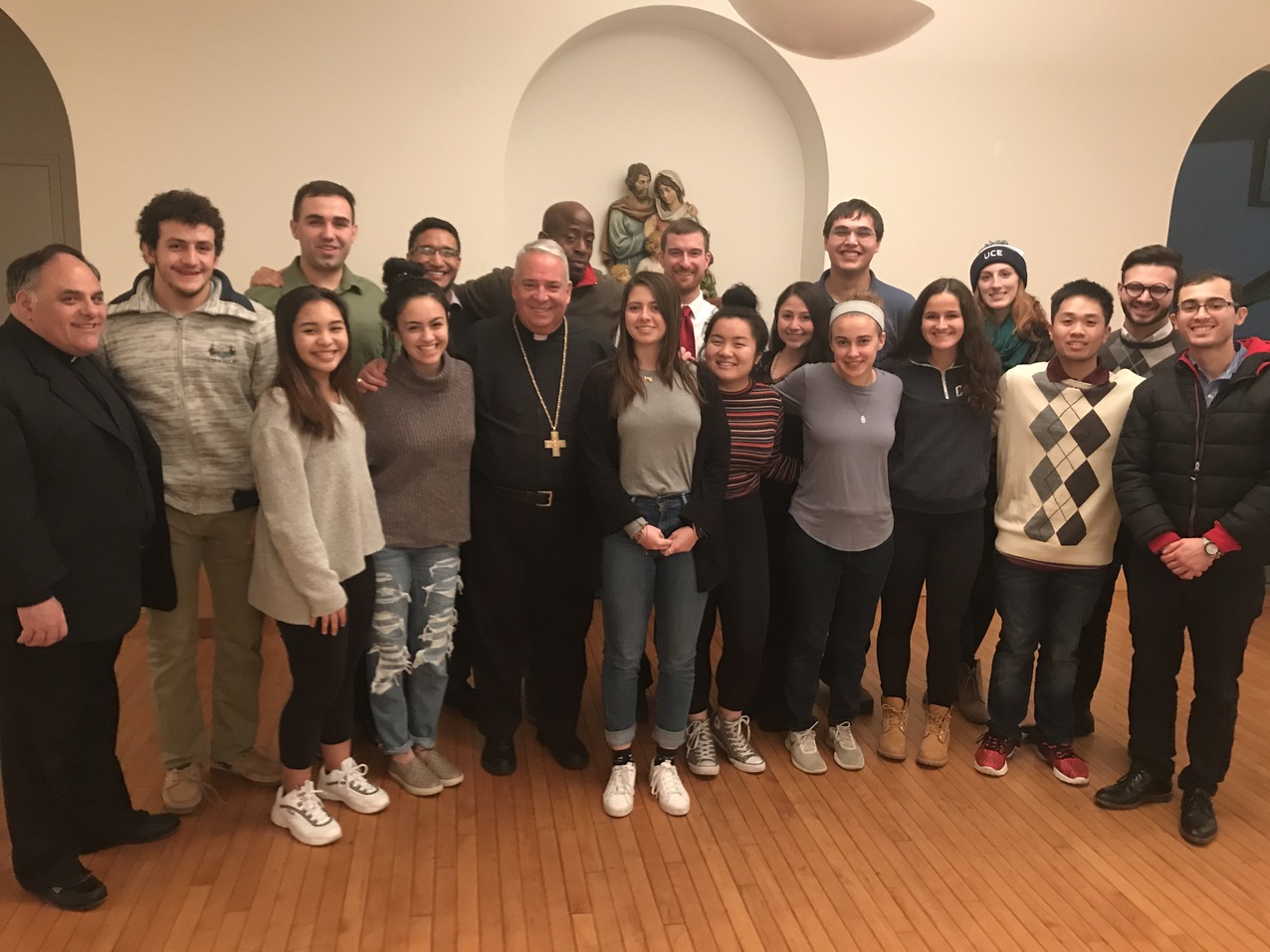 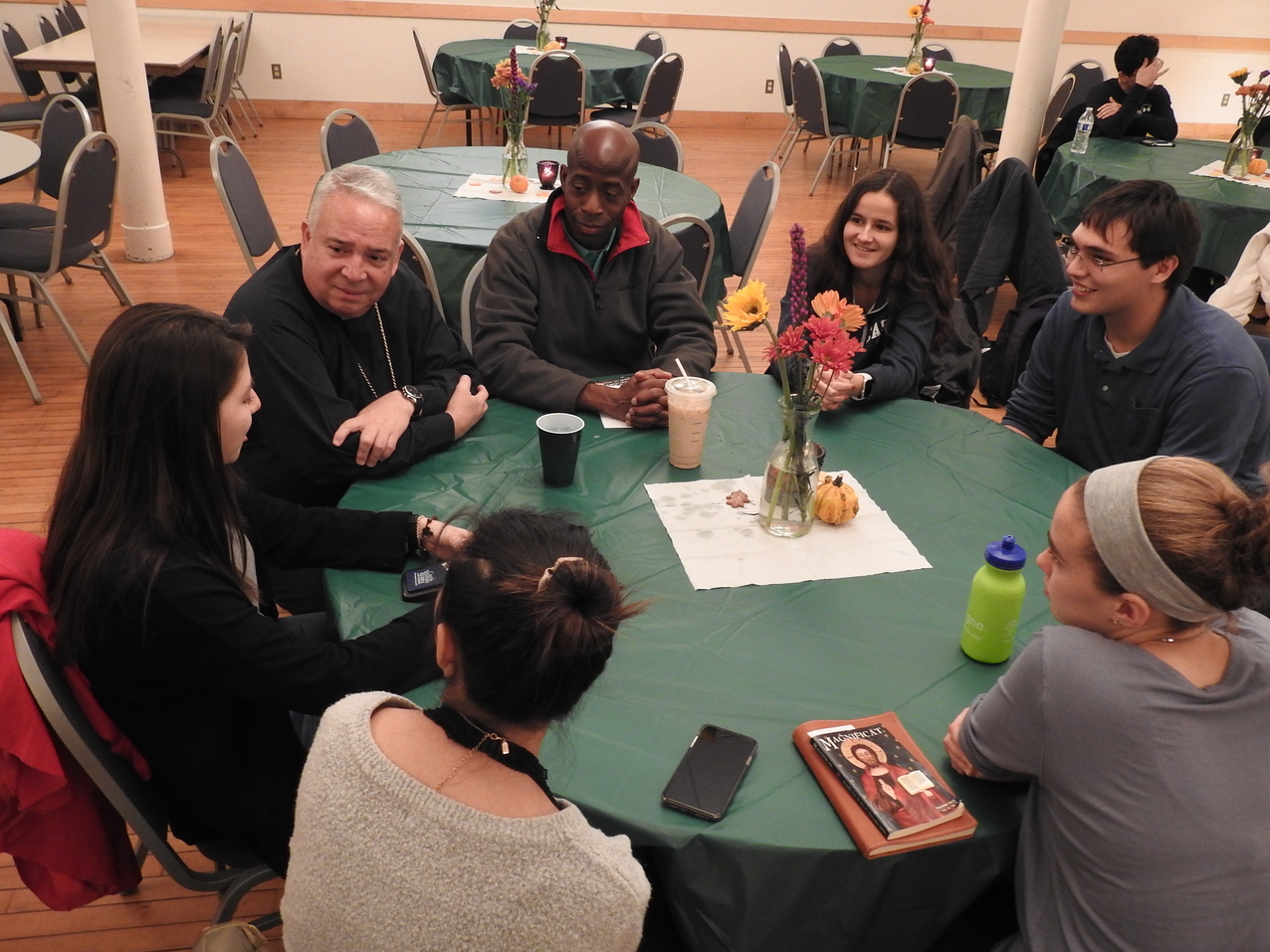 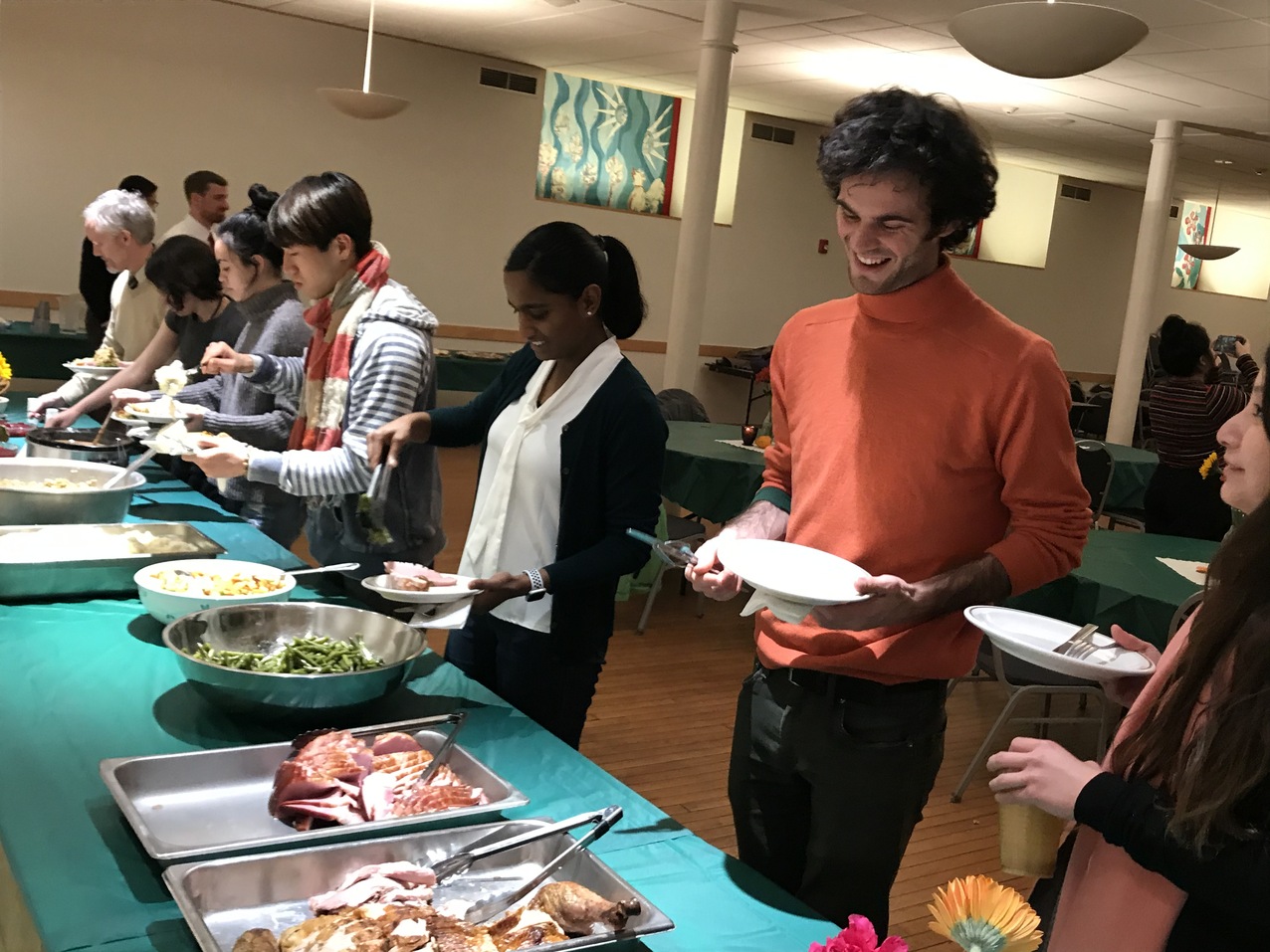 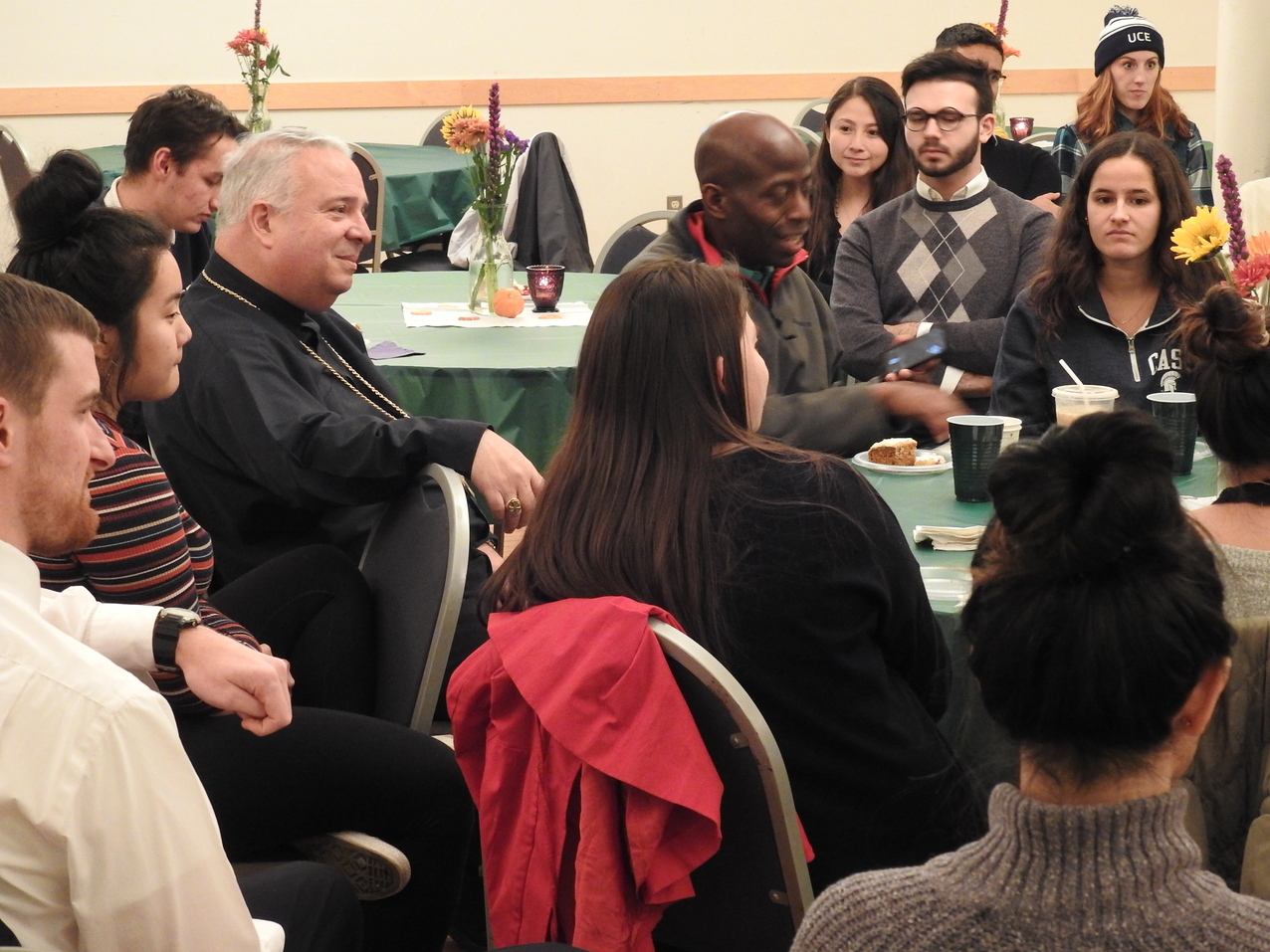 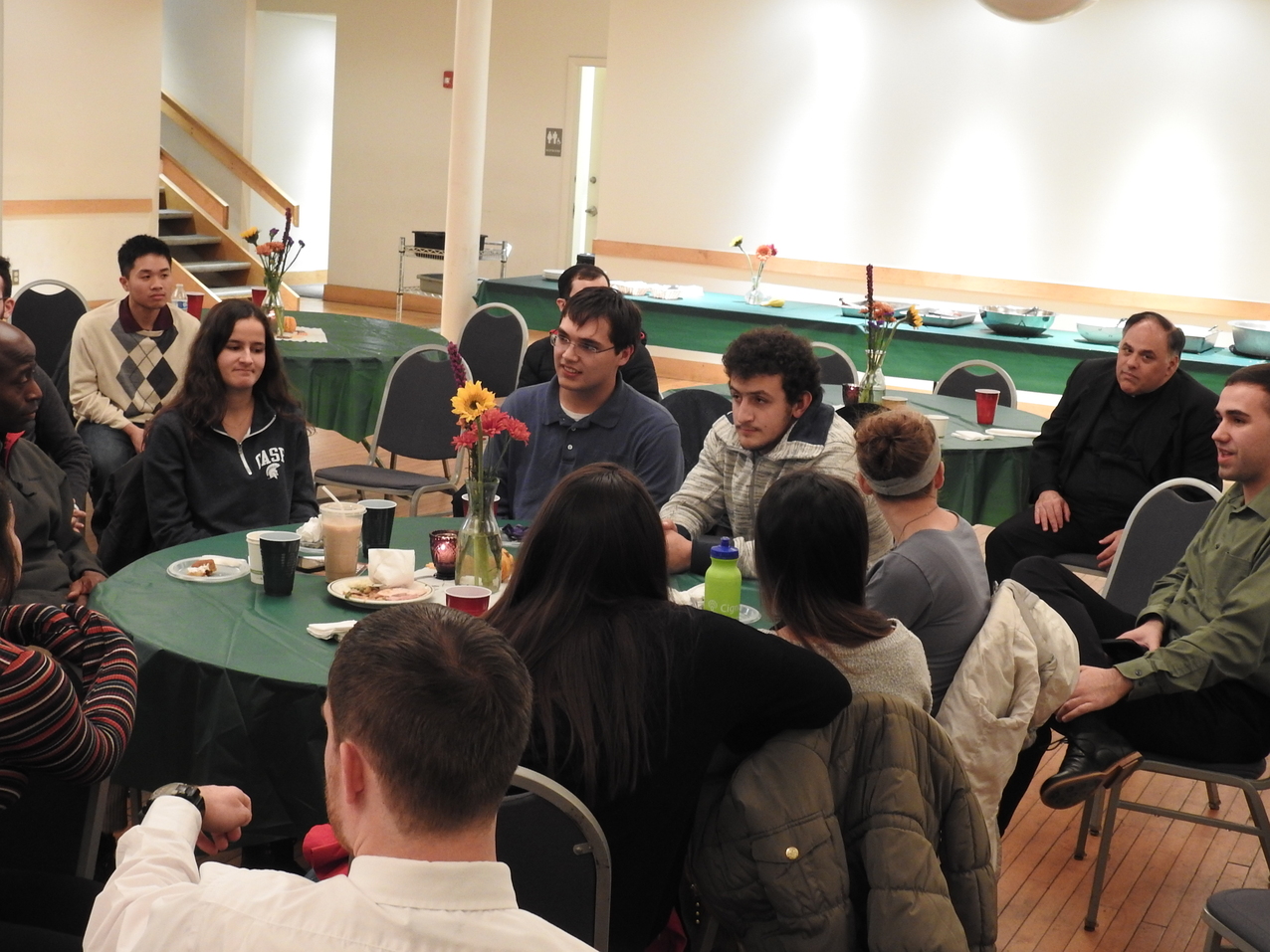 Thanksgiving came a little early for members of the Case Catholic Campus Ministry.

About 30 Case Western Reserve University students who are members of the Newman Campus Ministry program participated in evening prayer on Nov. 19 at Holy Rosary Church in Cleveland’s Little Italy neighborhood. After prayer, they headed downstairs to the church hall where parish volunteers had prepared a Thanksgiving meal with all the trimmings.

The bishop spent time with the undergraduate and graduate students before heading to Indianapolis, Indiana the next day to join more than 20,000 high school students for the National Catholic Youth Conference.

“I want to hear from you,” he told the group. “This is your chance to ask me anything you want.”

For about an hour after dinner, they chatted, shared observations and asked questions of the bishop in a casual conversation.

One student remarked that at times it can be difficult to be a Catholic on a college campus. Some parts of the faith are almost considered to be akin to a fairy tale, the student said.

“It’s a little easier for me,” the bishop said, but he noted that every age in history has had its own heresy. “I think when people look back on this time, radical subjectivism will be our heresy.” Bishop Perez said. “We want to make decisions about our sex, when life begins and even how it ends,” he said. In the Book of Genesis, in the Garden of Eden, God told Adam and Eve they could have access to anything but one tree, but they disobeyed him, the bishop said.

“Our world is becoming more secular,” he added. The bishop recalled that on a recent trip to the Holy Land, he heard Muslims being called to prayer five times a day. When asked about his advice, the bishop replied, “Stay true to your core values; that’s what will guide you.”

When talking about how some people comment that they consider religion to be “stodgy” or “boring,” the bishop aid it’s because those people don’t have a relationship with God. “It’s a matter of perspective,” he said.

He also told the group that he’s heard people say that young people don’t believe in organized religion. Yet, more than 3 million young people attended World Youth Day in Rio de Janeiro in 2013. “The beach was a sea of young people,” he said, recalling the closing Mass.

“The Catholic faith is old, but here we are,” one student quipped.

The bishop posed a question to the group, asking who saved Western civilization. The answer: Catholic monks and the Church. He noted how they saved books, copied documents and performed other crucial tasks to ensure that part of history would survive.

“And now, as bishop of this diocese, I get to see a vantage point of the Church that is national and international,” he said.

One student asked him what was the most amazing thing he’s experienced.

“To me, seeing the breadth of the Church. As a bishop, I roam the diocese and see the goodness, the vibrancy and passion of people. I’m very impressed with the vibrancy of young people like you. It takes a lot of courage to stand up for your faith,” he told the group.

Another student asked what prayer he would say to for the victims of sex abuse.

“I pray for healing. That which broke us also makes us strong. We are starting to see some healing,” the bishop said. He also noted that Adam and Eve’s failure showed us that sin is redeemed. The Church is a leader in unmasking the evil, he said, noting that sexual abuse of minors also occurs in some families.

“The Church has suffered a great deal because of this,” he said, but added that the policies established in the wake of the clergy sex abuse scandal are being adopted by others facing similar issues. “That’s the nature of Christianity. That which breaks us transforms us,” he said.

“The Church has been in crisis before,” Bishop Perez said, and each time it has relied on faith. “What you see happen in the body of Christ – the Church – is no different than in our own lives.”

When asked if there is a particular Scripture passage that sticks with him, the bishop reflected on the previous two days’ Gospels, one that focused on a blind man who knew something was missing in his life and when he heard about Jesus, he began shouting. Although others told him to be quiet, he refused and Jesus told them to bring the man to him. Because of his faith, his sight was restored.

In the other Gospel, Zaccheus also realized something was missing in his life and he climbed a tree to get a look at Jesus. The bishop said his sense of urgency shows us how the Lord responds when he sees our desire.

They also talked about how the bishop discerned his vocation, his thoughts on the different rites in the Church, other faiths and his impression of bishops in the Church.

“There is nothing else I’d rather be doing,” he said of his priesthood. And regarding other rites, he said there is a spirit of respect as the different faiths work together.

As far as the other bishops, Bishop Perez said at age 58 he’s on the younger end of the spectrum. As he’s gotten to know his brother bishops, he said he finds them to be “smart, humble and the cream of the crop” who are faced with great responsibility. “They are incredible people who try really hard.”