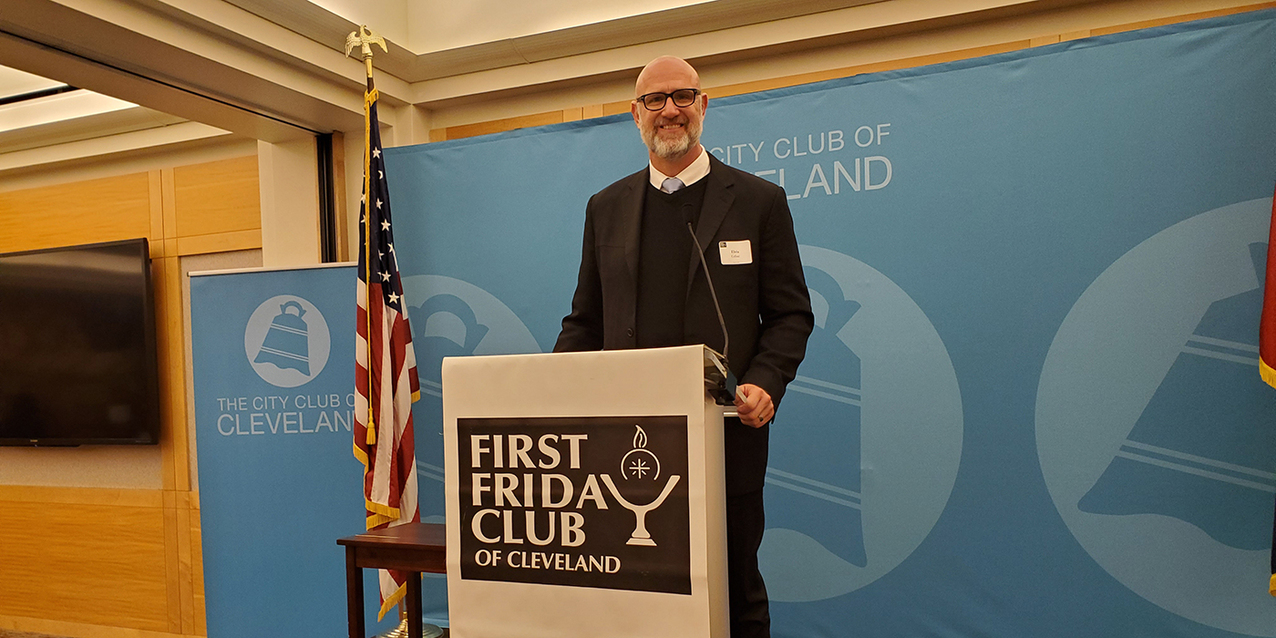 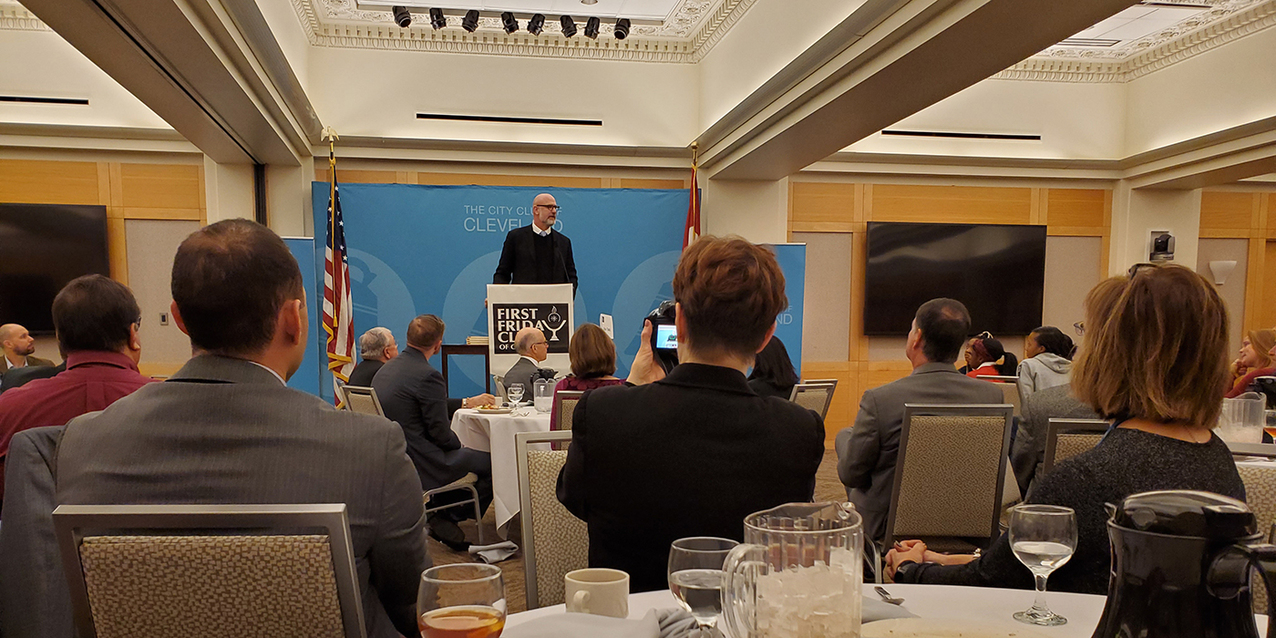 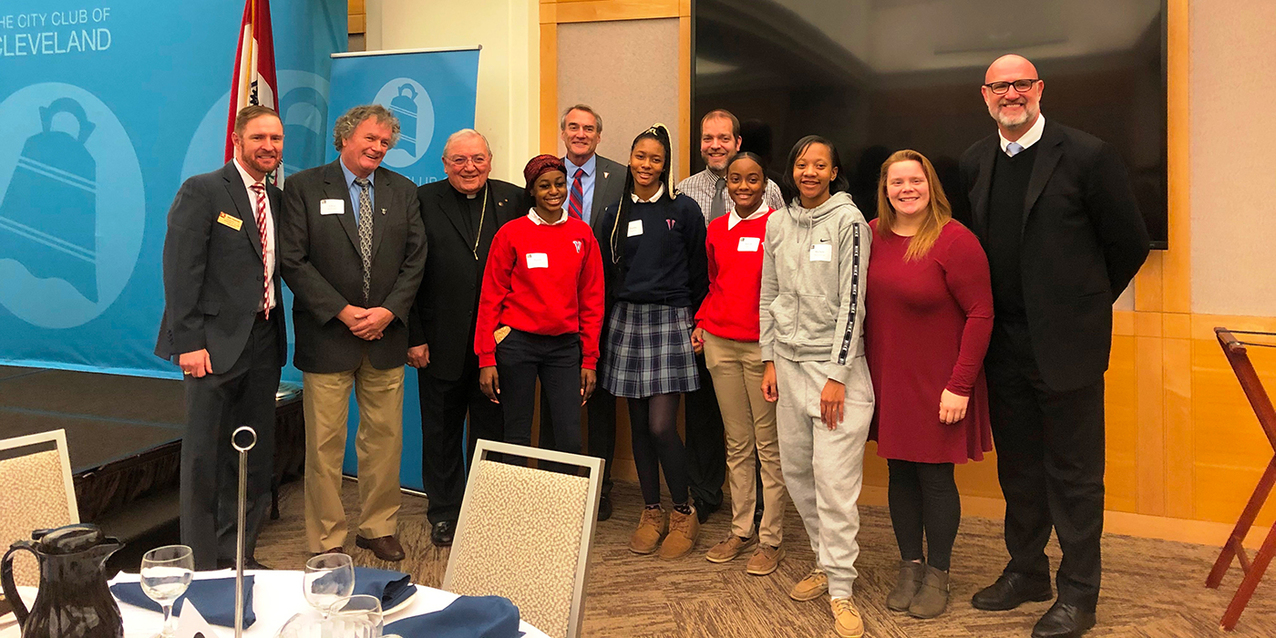 One thing is front and center in Elvis Grbac’s life: Christ.

The former NFL and Super Bowl-winning quarterback shared with the First Friday Club of Cleveland on Dec. 5 how his faith has molded him. Faith and family are his priorities, Grbac said -- and faith is definitely first.

As a 10-year-old, he remembered dressing early for Easter Mass, lying in his bed and contemplating the crucifix.

“I broke down in tears,” he said. “I understood what Christ had done. The Holy Spirit opened my heart and put that into my heart forever. That was God working through a 10-year-old kid.”

As the years progressed, Grbac attended St. Joseph High School (now Villa Angela-St. Joseph) in Cleveland and the University of Michigan before moving on to the NFL.

“I guess I was a pretty good athlete,” he quipped.

Grbac was good enough in high school to be noticed by a Division I football program. At Michigan, he led the Wolverines to five Big 10 championships, four Rose Bowl appearances and a Gator Bowl appearance before being drafted by the San Francisco 49ers, where he played quarterback for four years and helped the team win its fifth Super Bowl. Then he spent four years with the Kansas City Chiefs before finishing his NFL career with the Baltimore Ravens in 2001.

Through it all, his faith sustained him. He recalled how with the 49ers’ team owners -- the DeBartolo family -- had a strong Catholic background and ensured Mass was available each Sunday.

He also credits his wife, Lori, who was his high school sweetheart, for being a strong partner and best friend. They have been married 25 years and have three children. The Grbacs are members of Holy Angels Parish in Bainbridge.

“I wouldn’t be here without her,” he said.

After retiring from the NFL at age 31, Grbac said he had to decide what to do with the rest of his life. Moving back to Cleveland was a no-brainer.

He talked about seeing his grandparents – who lived in Croatia -- only a handful of times. “I didn’t want that for my kids. I wanted them to know their grandparents and what they sacrificed,” he said.

Grbac’s parents, Ivan and Cecilia, immigrated from Croatia in 1968 with his two older siblings.

“They came here with two children, their faith and no money,” he said, adding, “I could never repay them for what they’ve done. They’re everything to me.”

His parents are staunch Roman Catholics and instilled the faith in their children. “Sunday Mass? You were there,” he said, adding his faith is entwined with who he is.

Grbac said he became very involved in his children’s lives after retiring from football. He was present for them at every opportunity, including driving them to school and coaching all sports.

“I took the time to be the best father I could to my three kids,” he said.

One thing both Grbac and his children – ages 19-23 -- cherish is his 1:1 time with each of them. He said he will sit down regularly and each child and just talk – sometimes for hours – about anything and everything in their lives.

“It’s gotten to the point where my daughter (a volleyball player at Northwestern University) already called and asked when her ‘dad talk’ would be,” he said. The day he spoke to the First Friday Club his wife was bringing her home for Christmas break.

When the opportunity came earlier this year for him to return to his alma mater, Grbac said he knew it was where he needed to be. He serves at athletic director, head football coach and director of the Marianist Urban Students Program. Some of his 21 students attended the First Friday lunch, with one offering the opening prayer. He spends time with the students and said he tries to be like Christ in their lives.

Grbac said he knows that as a coach, he has a unique opportunity to make a difference in the lives of the team members. He always opens and closes practice with a prayer.

“A football coach is there to form men,” he said. “I was fortunate to have great coaches who understood who I was. I encourage you men – it’s up to you – to be a father figure.”

He said in his current role, he’s almost been given a platform. “God is using me as a vessel.”

Grbac, who also is working on a master’s degree at Saint Mary Graduate School of Theology, said he’s involved with a group of men at Holy Angels who share their faith. He talked about one time a few years ago when he heard a talk about confession from a priest. Afterward, “I made my first real confession in a long time,” he said, recalling how emotional it was. “I felt beaten up, but I felt the real mercy of God.”

He took a year to reflect on who he was and how he got where he is. “I called up a lot of people to talk, to ask forgiveness,” he said. Grbac also placed his faith in the Blessed Mother.

“I spent a long time venerating the cross,” he said, adding he came full circle from the 10-year-old who realized what Christ sacrificed. “I’m here because Christ truly lives within me – not because of football.”

Grbac said Advent is a good time to open and renew an encounter with Christ. “Christ comes into people’s lives and he changes them,” he said.

He encouraged attendees to find a Scripture passage that affects them, to plant a seed that needs to be planted and to welcome the Lord when he comes into their hearts.

His favorite Scripture passage is John 13, 12-17, where Jesus washes the apostles’ feet and then asks if they understand what he did for them. He set an example for them and told them, “no servant is greater than his master nor is a messenger treater than the one who sent him. Now that you know these things, you will be blessed if you do them.”

Grbac emphasized the importance of making time for the Lord and for prayer. He is a daily Mass attendee and prays throughout the day, including saying the rosary in the car while driving to work and praying the liturgy of the hours.

“My day reflects my relationship with Christ. I take time to spend with him,” he said, adding if you do that, Christ will be at the center of who you are. “Just Sunday doesn’t cut it; you have to put time and effort into it.”

Bishop Nelson Perez will be the First Friday Club's next speaker on Jan. 9, 2020 at the Marriott Downtown Key Center. Tickets are $25. Click HERE for information and registration.