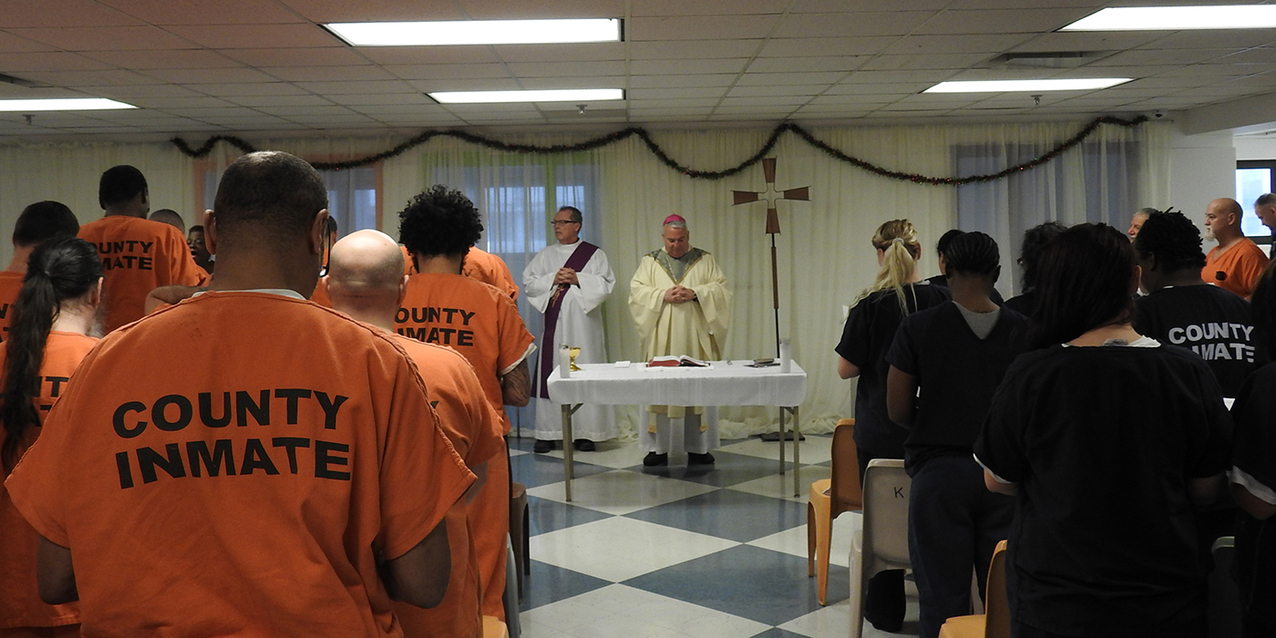 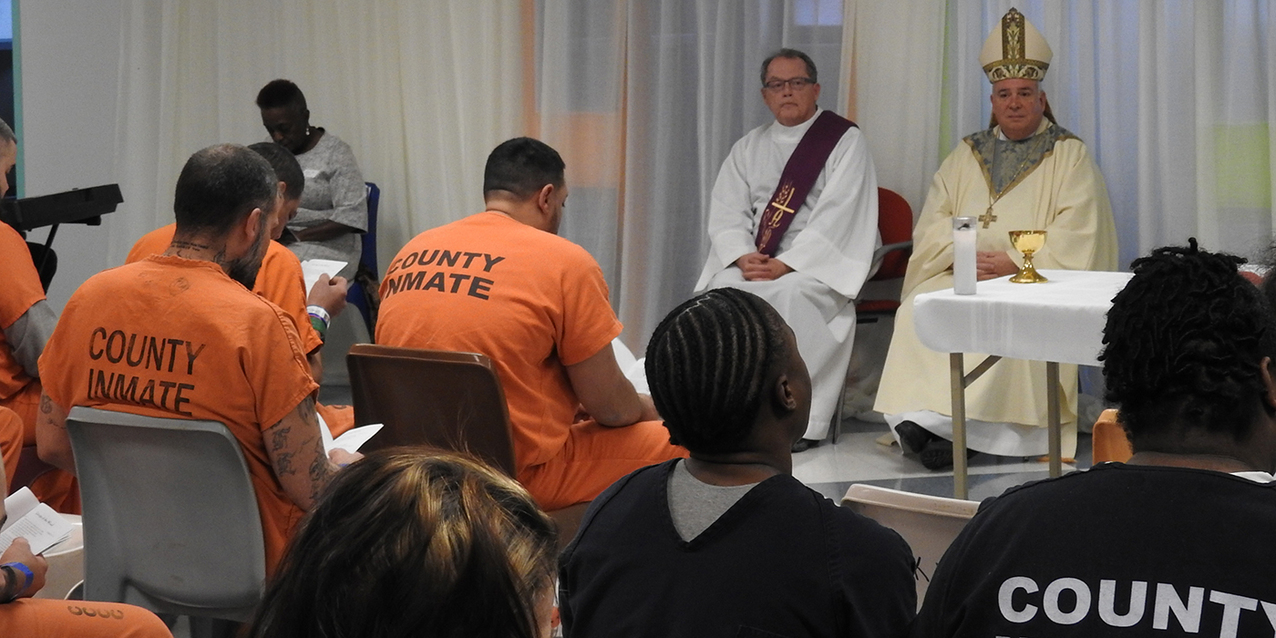 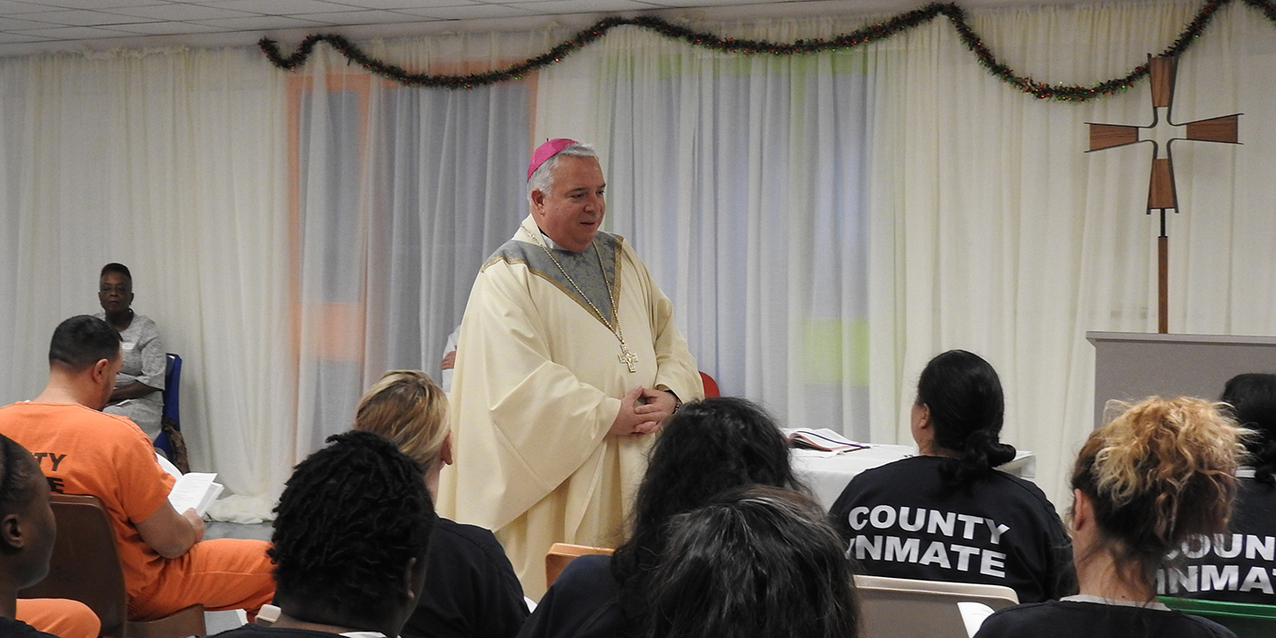 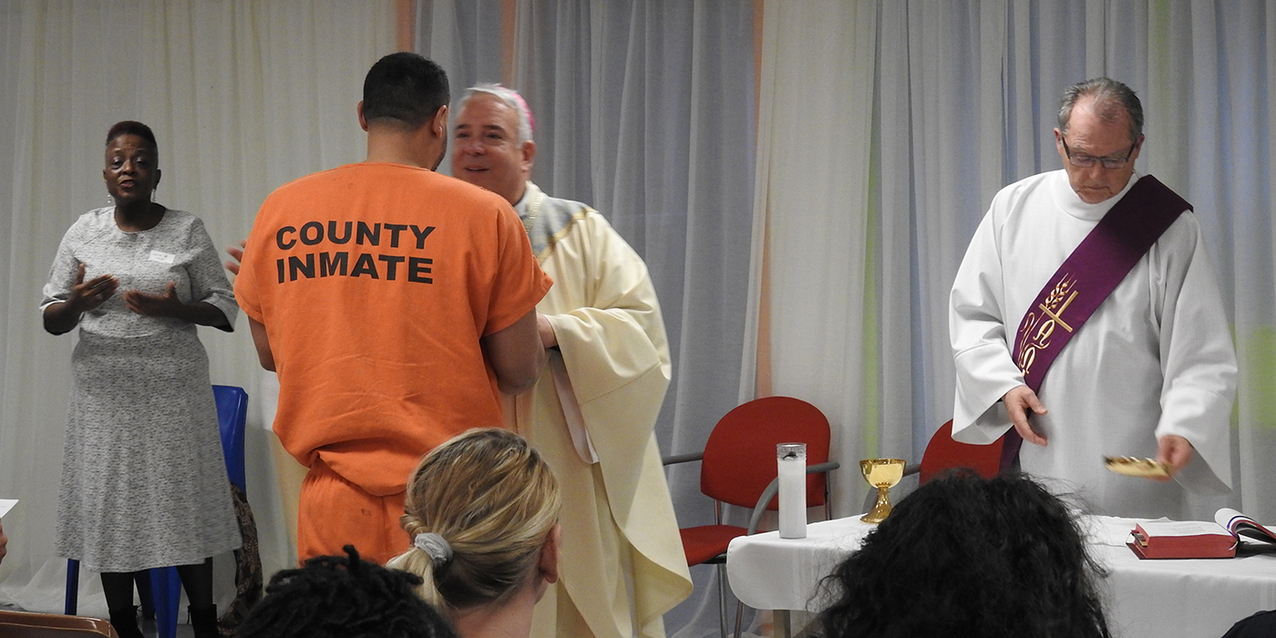 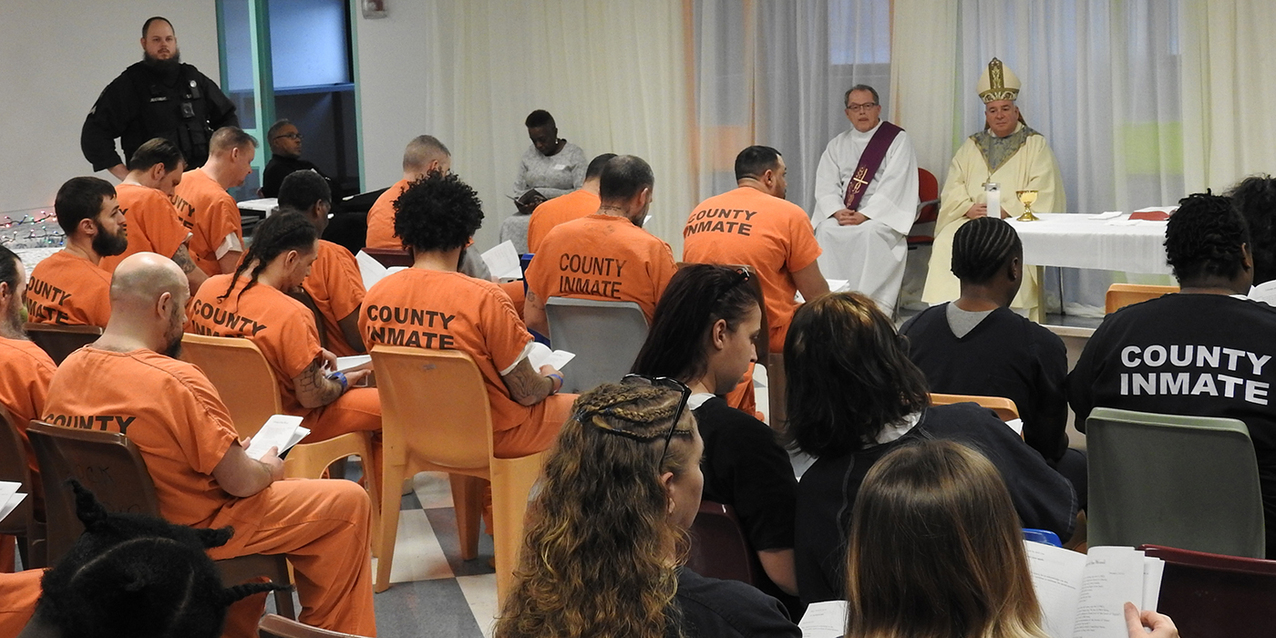 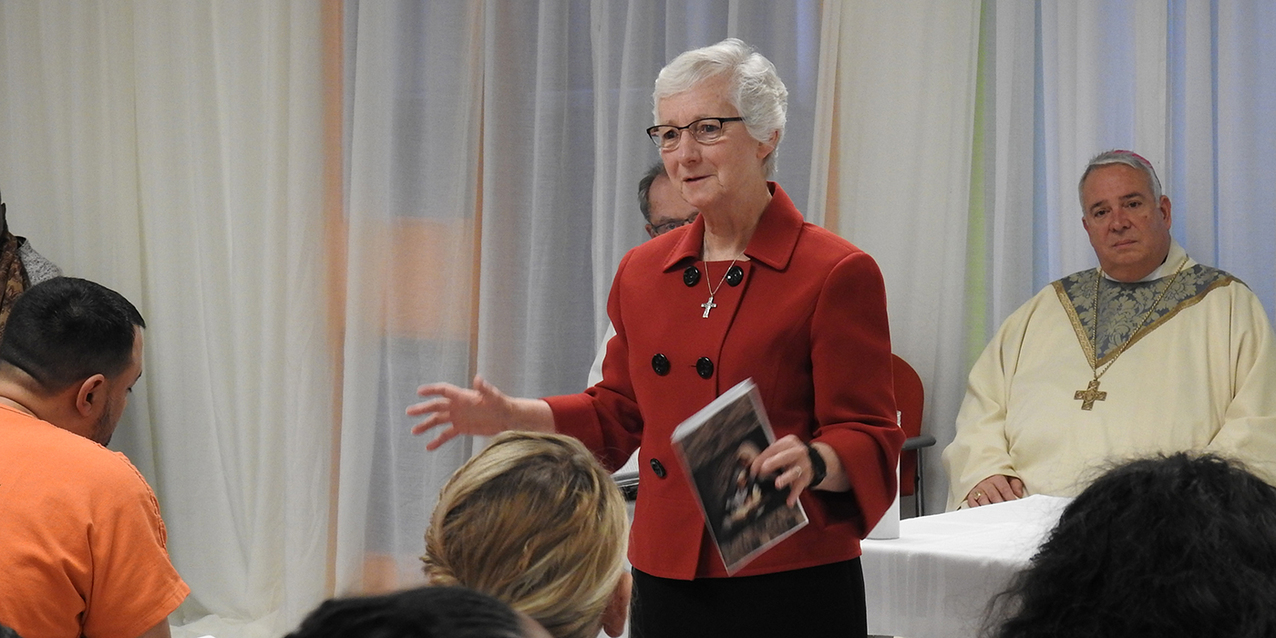 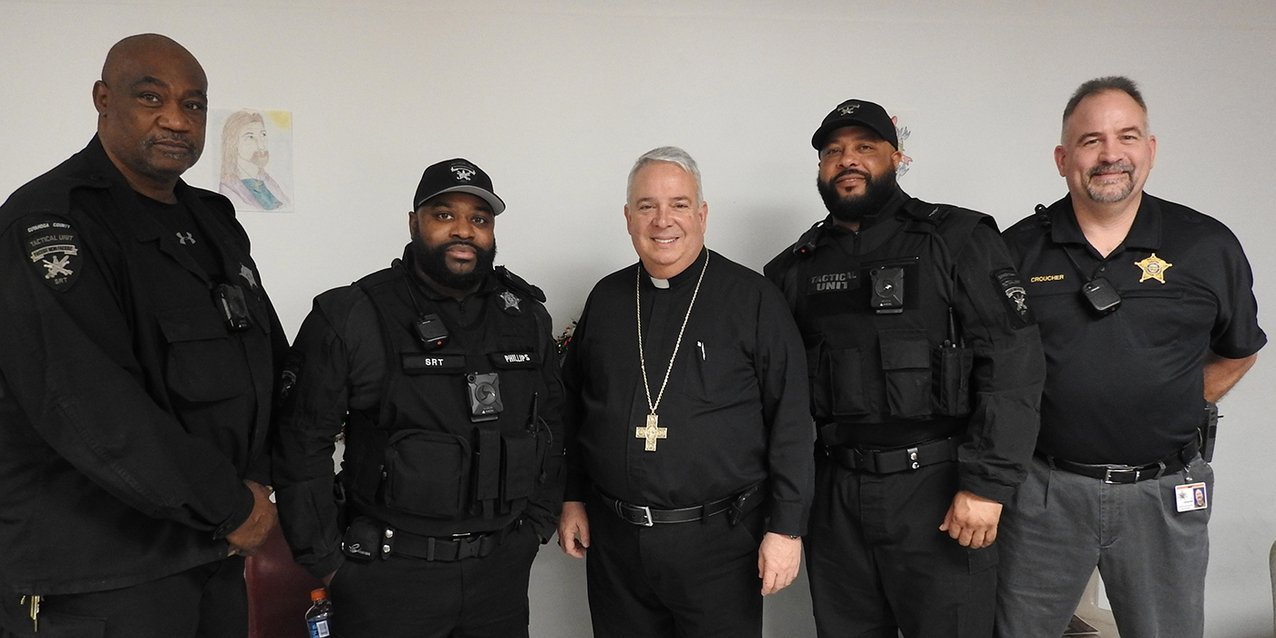 “God has a special place in his heart for each of you,” Bishop Nelson Perez told Cuyahoga County Jail inmates who attended the annual Christmas Mass on Dec. 18.

He also reminded the group that God’s love is shown in tangible ways, including those who minister to the incarcerated like Father Neil Walters, a diocesan priest who serves as the jail chaplain; Sister Rita Mary Harwood, director of the diocesan Parish Life Office, which oversees the prison ministry; volunteers from the Society of St. Vincent de Paul and others.

“They are a visible expression of the love in God’s heart. You are very special and God says that about you through them,” the bishop added. “They walk with you and accompany you at this moment in your lives.”

He told the inmates that while the circumstances of their lives will change, the story of Christmas will not. “It is a sacred story that captured the imagination of human history,” he said. “The story finds you here this year because of certain circumstances in your lives. I’m not here to judge. Next year, the story will be the same but your circumstances may be different.”

Bishop Perez told those gathered for the Mass – including corrections officers, the jail warden and others – that he was in Bethlehem recently and saw the spot where Jesus was born. Although Jesus’ birth is depicted as beautiful in art and song, in reality that’s not what it was like.

“It was messy. Mary was unmarried and found to be pregnant with someone else’s child. Joseph was planning to quietly leave her, but an angel appeared and told him not to fear. She was a single mother with a suspicious pregnancy, they had to travel and had no place to stay,” he said.

As the years went on, their lives were still messy, the bishop said. Even as an adult, he called Jesus’ life “a mixed bag. Some people loved him; others did not and wanted to kill him. And eventually, they did. But God had a plan.”

He said God looked down and saw how things were and he decided that we needed a savior, so he sent his son, Jesus. Hidden in the messiness of our lives is a grace and blessing that we must discover, he said. “These people who are helping you can help you find that.”

After Mass, Sister Rita Mary told the inmates how glad she was that they were there at the Mass. She said that before Mass, some of the prisoners mentioned how beautiful the Christmas decorations are in the room. “But you wish you were elsewhere right now,” she said. Sister also reminded them that while they will return to their cells later, they will not be alone. “God loves each and every one of you deeply. Remember: God doesn’t love junk. Don’t ever forget that. You may be in a mess right now, but it won’t always be that way,” she said.

“This may be a blessing – a time for you to think about your hopes and dreams. Those of us here today want to be here. We see the good in you,” she said, adding that the inmates have the ability to be the presence and the love of Christ for others.

Each prisoner received two Christmas cards and stamps so they could share the cards with someone special to them. They also received a chocolate candy bar.

Sister encouraged them to send the cards to someone they alienated or someone they love, explaining that it could be a special gift to that person. She shared the story of a prisoner a few years ago who sent one of his cards to his estranged mother. He wrote how much he loved her, how she and his father had been good parents, how sorry he was and that he hoped they could repair their relationship after his release.

The mother was overcome with emotion, Sister said, noting she called four times before she was able to stop crying and share the story with her. The woman also took a statue of Mary, placed it on the ground, sat next to it and read her the message from her son. “She said Mary knew what it was like to have a son in jail,” Sister added.

The inmates also were invited to take their worship aids with them and to take a small prayer book that was provided.