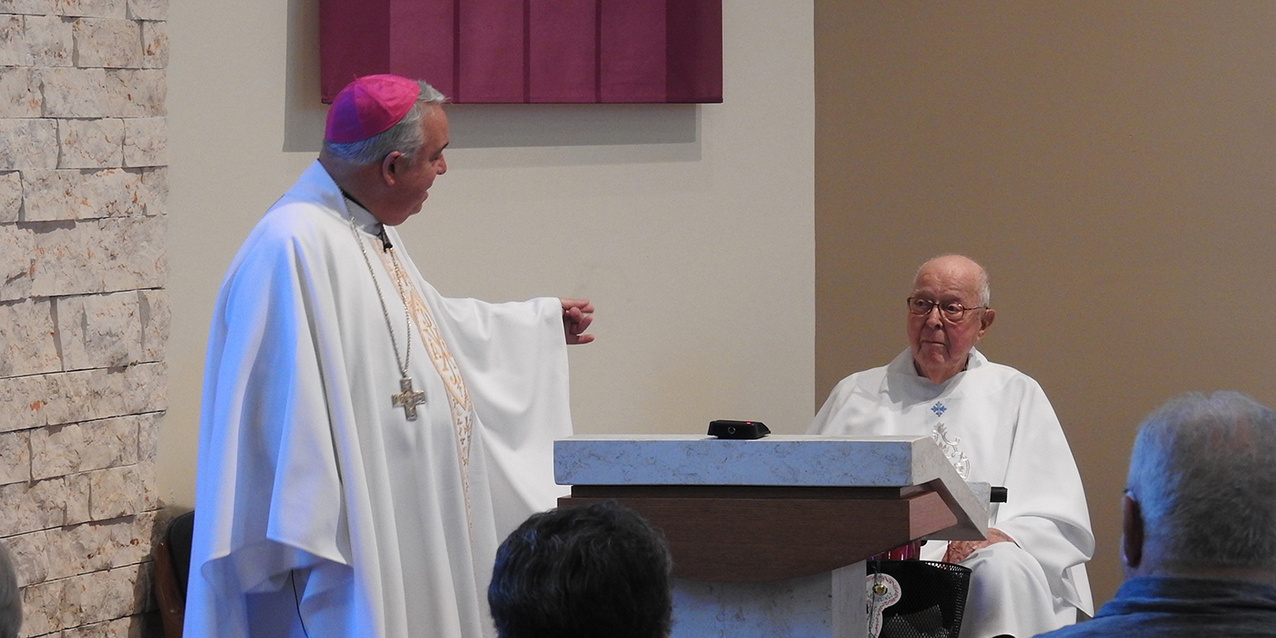 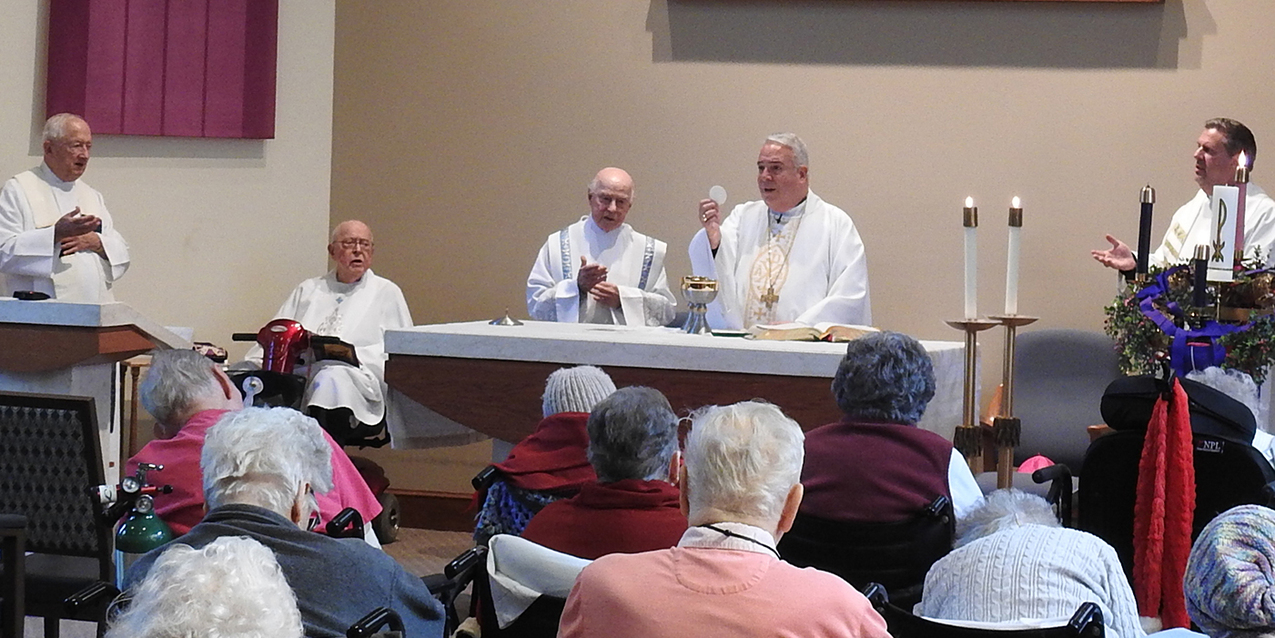 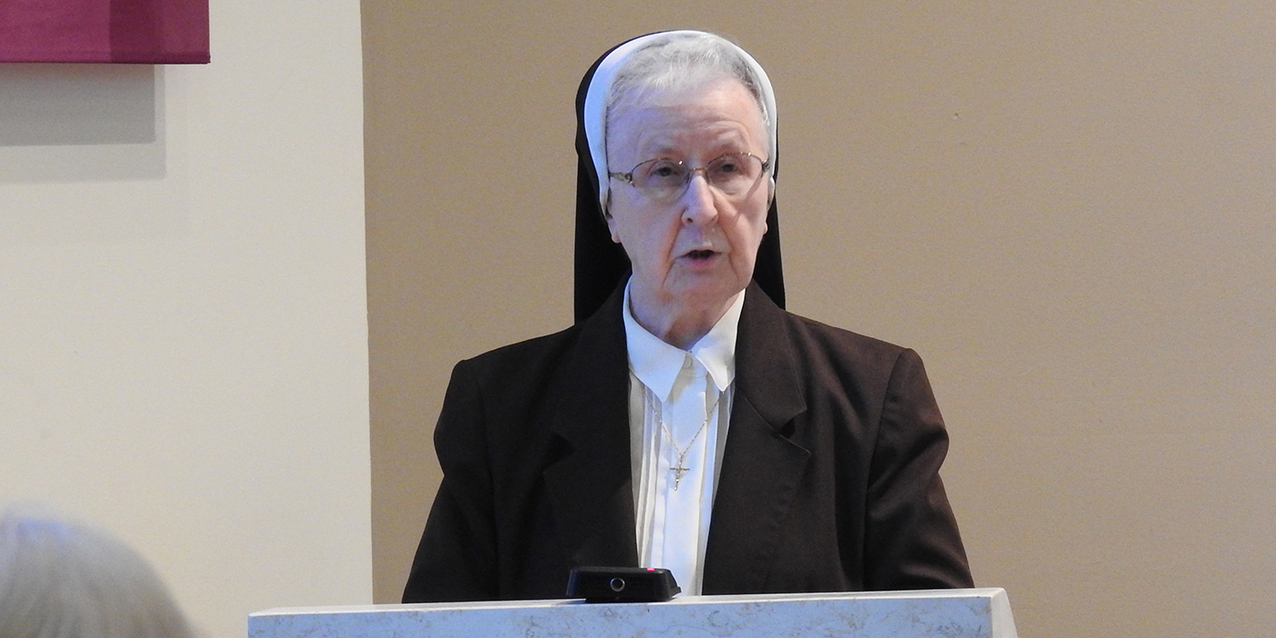 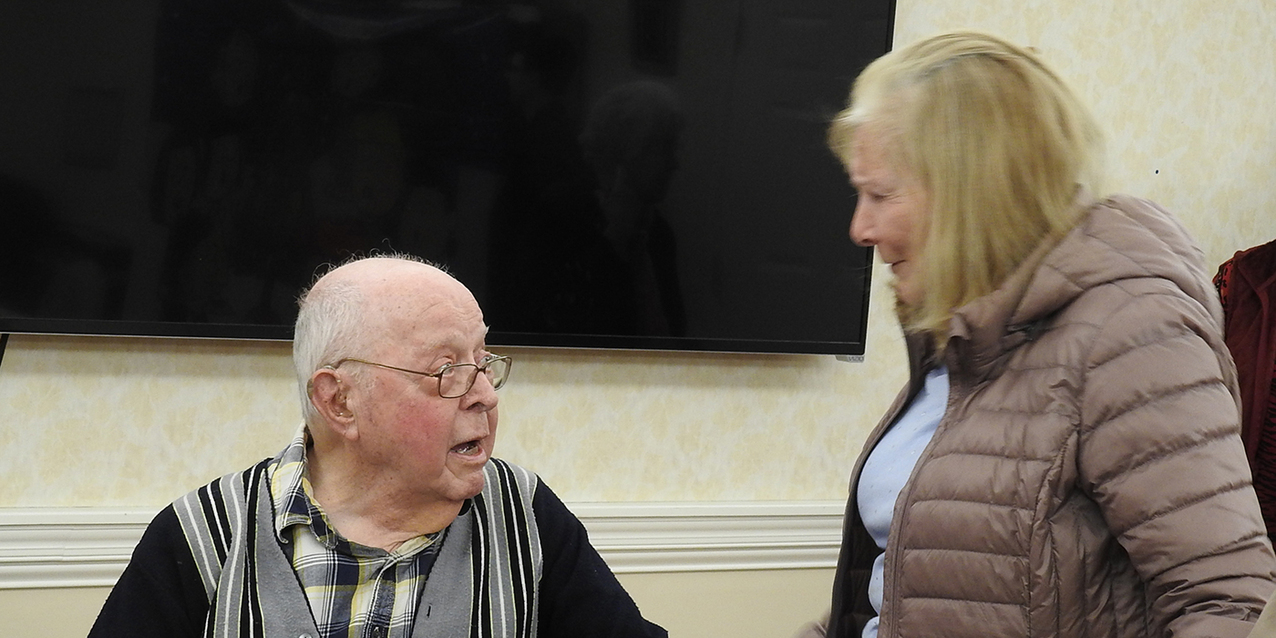 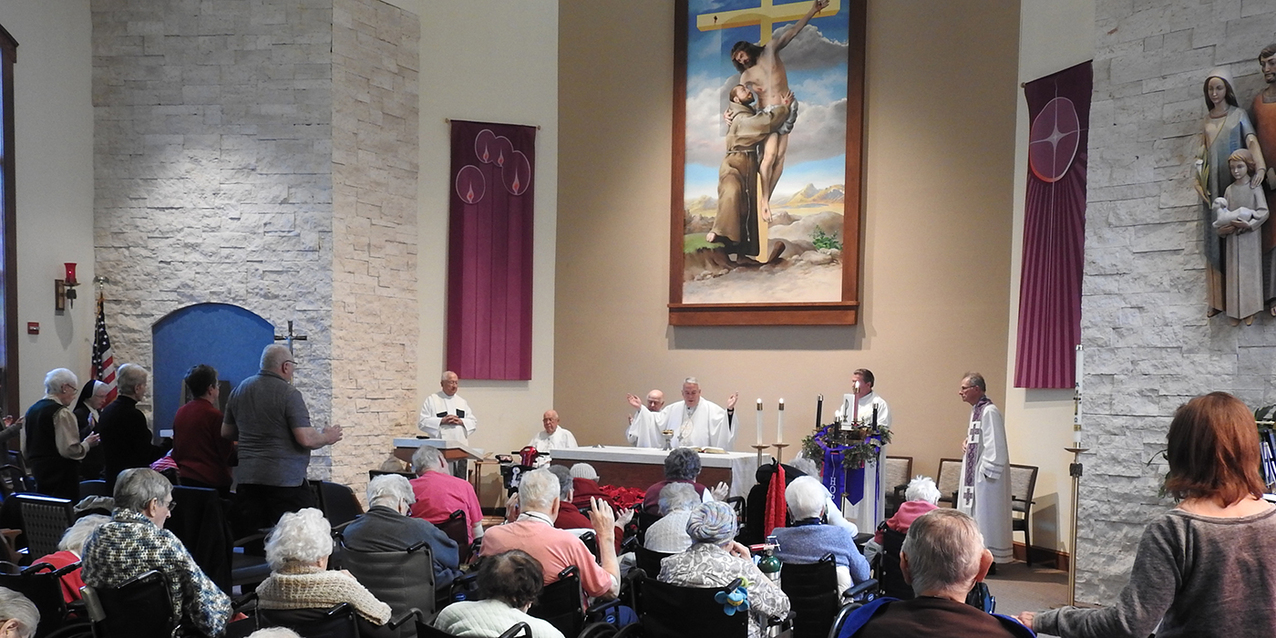 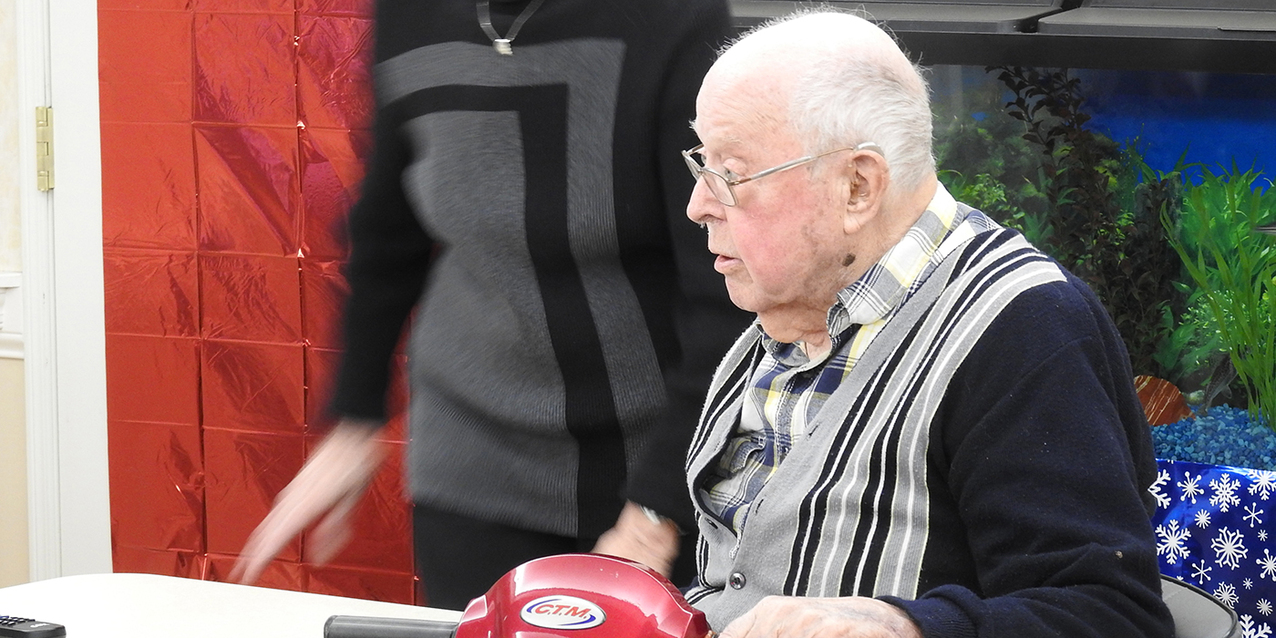 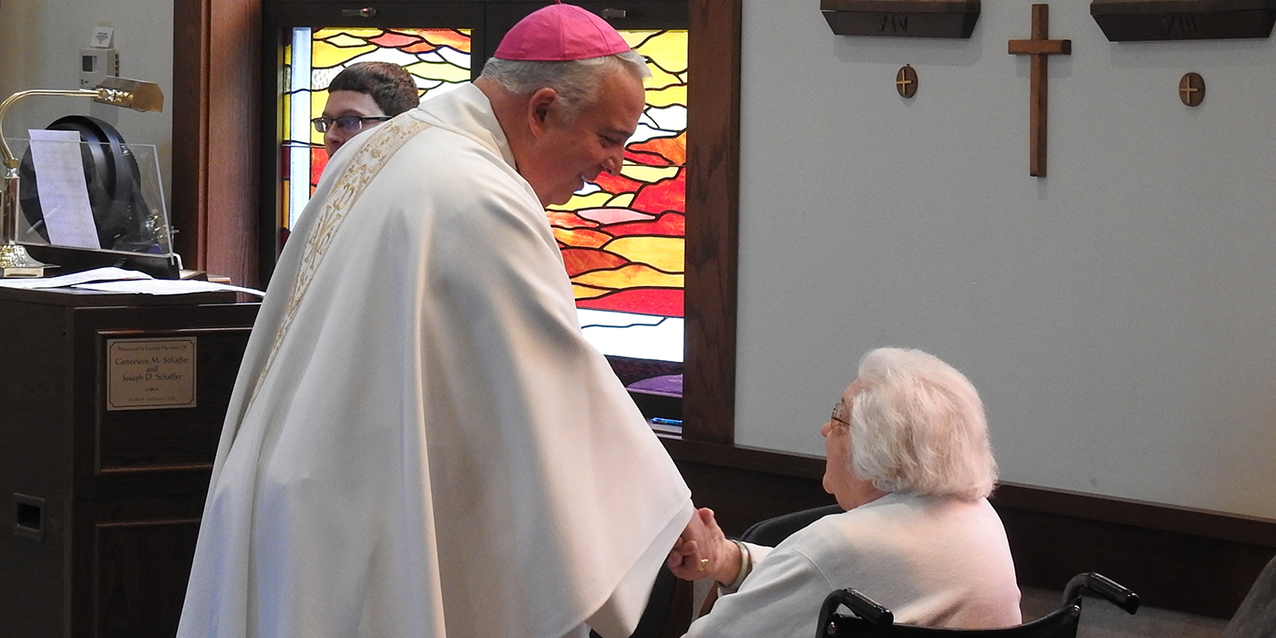 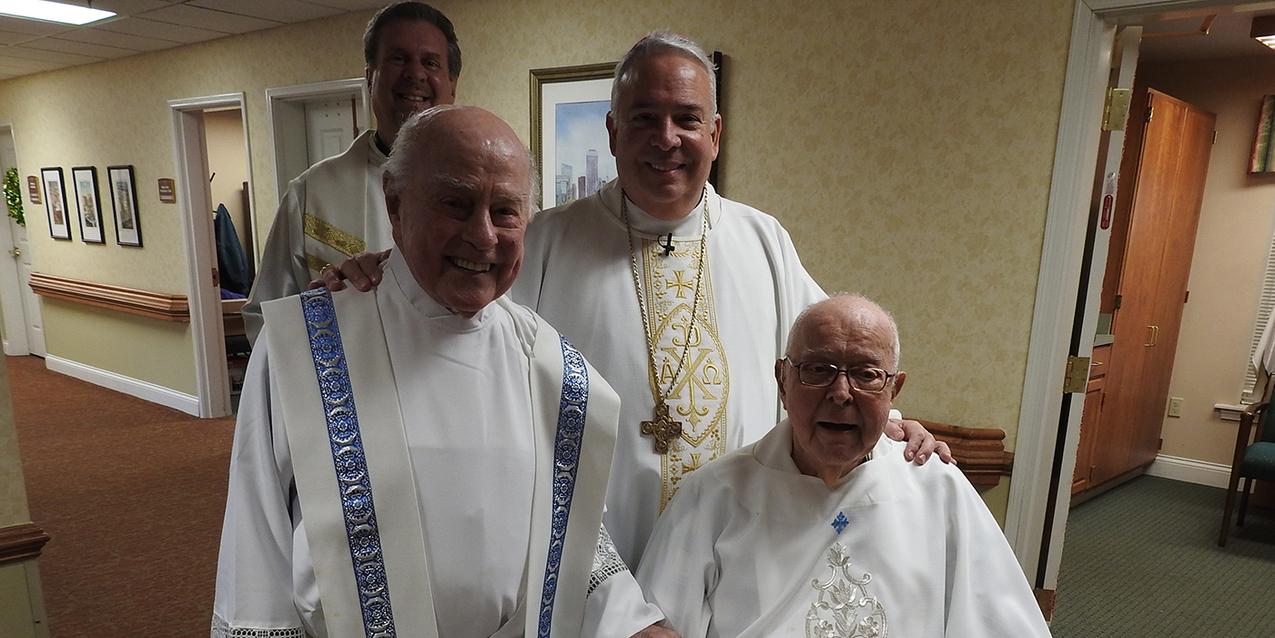 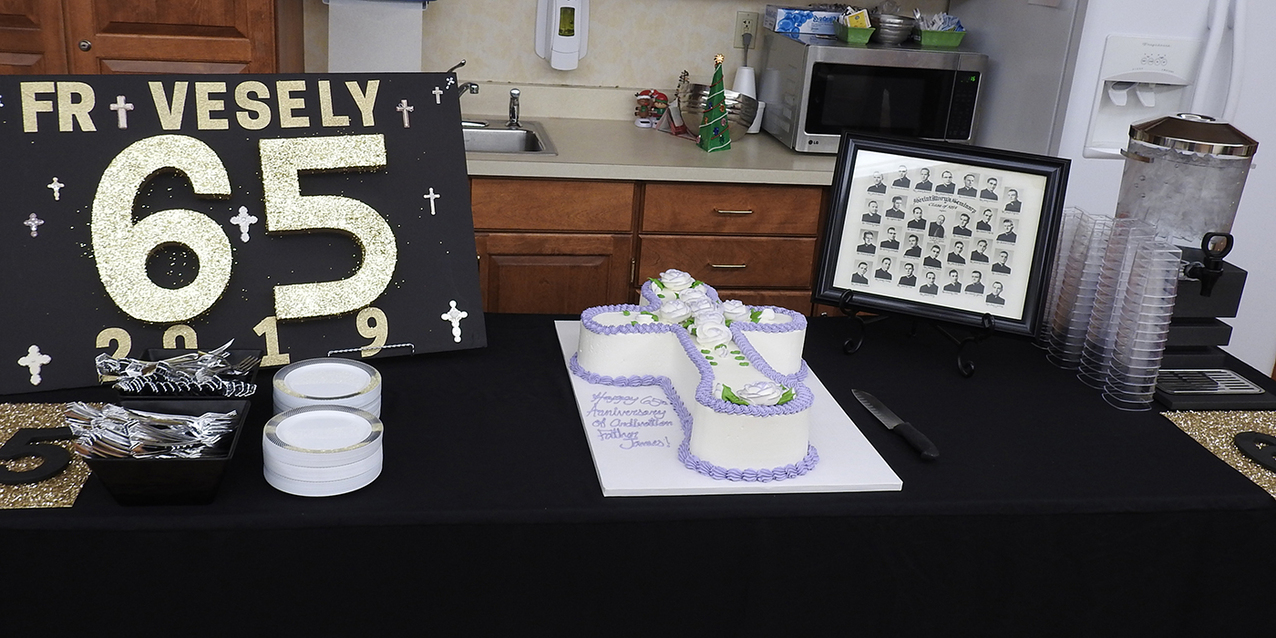 What started as a casual remark recently about celebrating the anniversary of his ordination evolved into a memorable occasion for Father James Vesely.

The 91-year-old priest was thrilled to have Bishop Nelson Perez visit Mount Alverna Village in Parma to observe his ordination anniversary at a Mass on Dec. 16 – just two days before the actual anniversary date of Dec. 18, 1954.

“I wasn’t even born when you were ordained,” the bishop quipped. “You could have baptized me.”

“Yes, I could have – if it was at a Bohemian church,” Father Vesely said, laughing.

He lives at Mount Alverna Village and assists with pastoral care at the facility, which is part of Franciscan Ministries and is sponsored by the Franciscan Sisters of Chicago. Mount Alverna provides independent living, assisted living, skilled nursing care, memory support and rehabilitation.

Even a health issue a few days before the celebration couldn’t stop the retired priest from enjoying the event.

Father Vesely -- who gets around with a motorized scooter -- and a classmate, Father Jim Becherer who is 95, were among the concelebrants at the Mass. Father Norm Gajdzinski, Father Jim Schmitz and Father Larry Bayer, all friends of Father Vesely, also concelebrated the liturgy.

“Imagine what they’ve seen during their priesthood. They learned the prayers and celebrated Mass in Latin. Then there was Vatican II (1962-1965) and Mass was celebrated in English. They’ve seen so much change,” he added.

The bishop also talked about the Gospel in which Jesus asked Peter if he loved him three times and told him to feed his lambs and his sheep. Peter’s response that he loved the Lord was in contrast to his denial – three times – shortly before that and prior to Jesus’ crucifixion, the bishop pointed out.

“The apostles never seemed to get the message straight. They were always slightly off and Jesus had to lovingly correct them. But he chose them – not because they were perfect or better. We don’t know why we were chosen,” the bishop said.

When discerning his own priestly vocation, Bishop Perez said he remembers asking God, “‘Why?’” And then God spoke to me. He told me, ‘I am not accountable to you. I’m not asking you to understand, I’m asking you to follow.’ As priests, we’re called to an intimate relationship with the high priest,” the bishop said. “And that intimate relationship between the priest and Christ overflows to service in the Church.”

He said at the consecration of the Mass, the priest speaks as Christ – in first person. “We say, ‘This is my body,’” the bishop said, noting how intense that is for the priest.

“You are a priest forever. Even death doesn’t take that away. Your soul has a special mark,” he told the other priests. “Thank you for your service. You are a great gift for us.”

After Mass, Father Vesely – in a strong voice -- chanted a litany of thanksgiving and asked the congregation to respond to each statement with “We thank you, Lord.” The intentions included thanking the bishop for making time to celebrate the Mass, for families, for those who live and work at the facility as well as the silent thoughts of thanksgiving from those in attendance.

Father Vesely noted there were more than two dozen men in his ordination class and only four survive: himself, Father Becherer, Father Joe Piskura and Father Art Bacher. The latter two were unable to attend the celebration.

Father Vesely served as parochial vicar at St. Clare, Ascension, St. Charles Borromeo, St. John Nepomucene and Our Lady of Lourdes parishes before he was named pastor of St. Procop Parish, where he served from 1973-1987. He also was pastor of St. Thomas More Parish from 1987 until he retired in 2005. Since then, he has assisted at St. Leo the Great Parish (where Father Schmitz is pastor) and at Mount Alverna.

Father Becherer served as a parochial vicar at Immaculate Conception (Akron), St. Martha and St. Francis Xavier parishes before spending time in graduate studies. He also served more than two decades as head of the family counseling clinic. He retired in 1990.