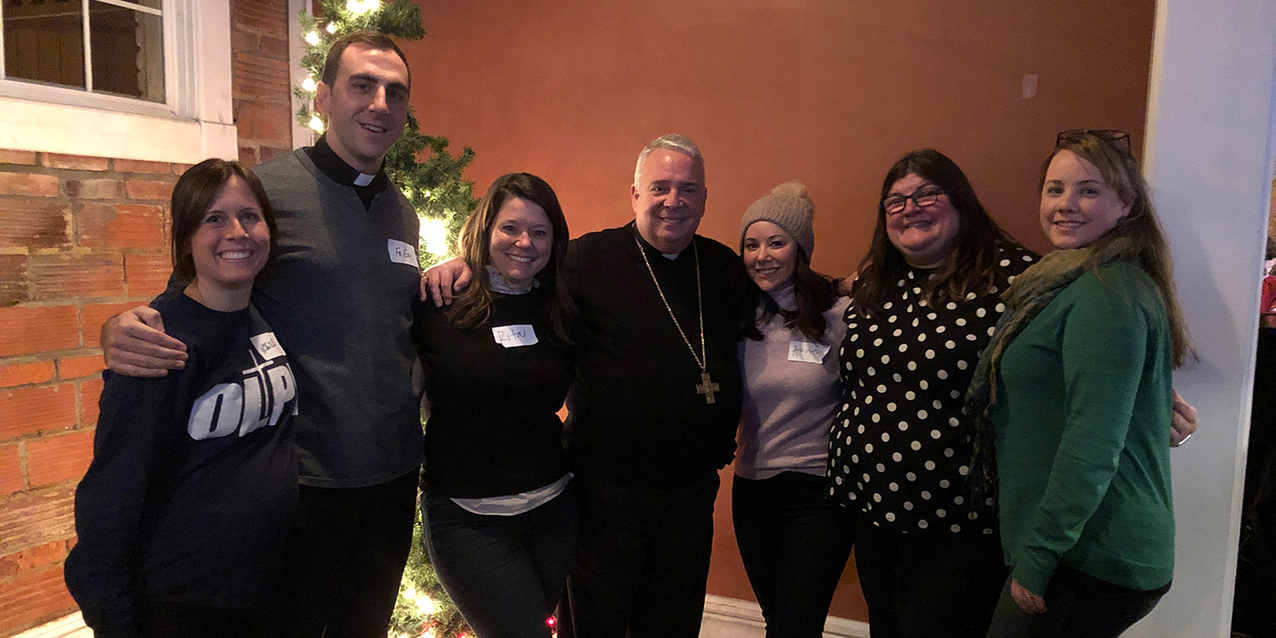 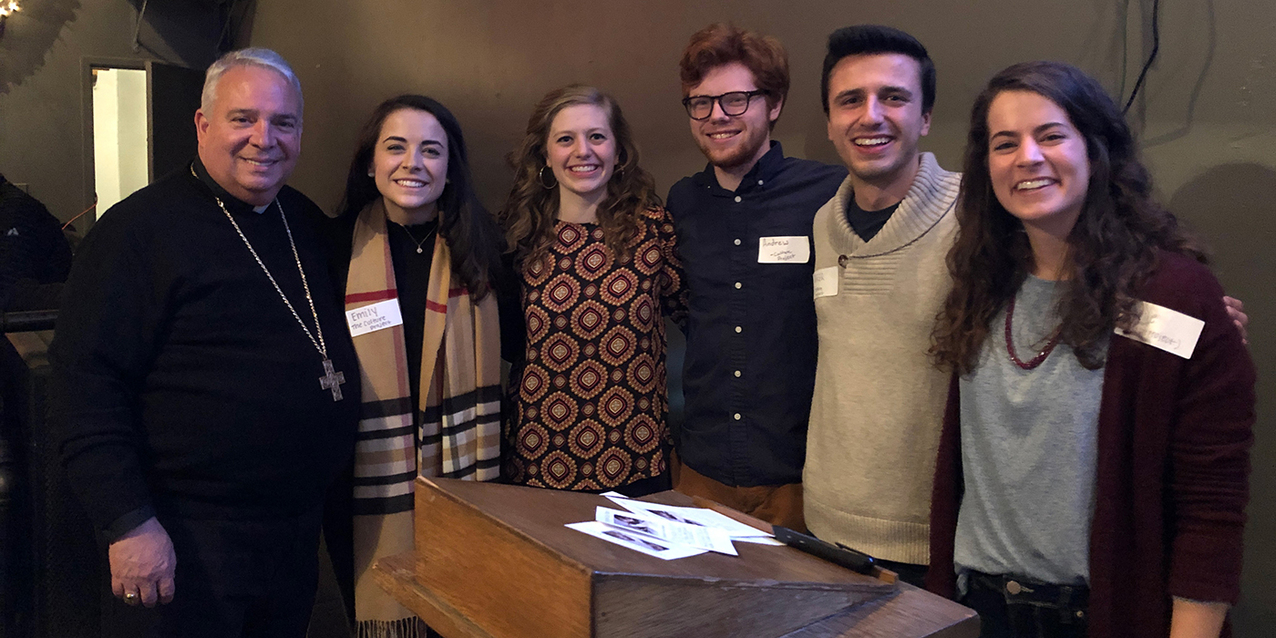 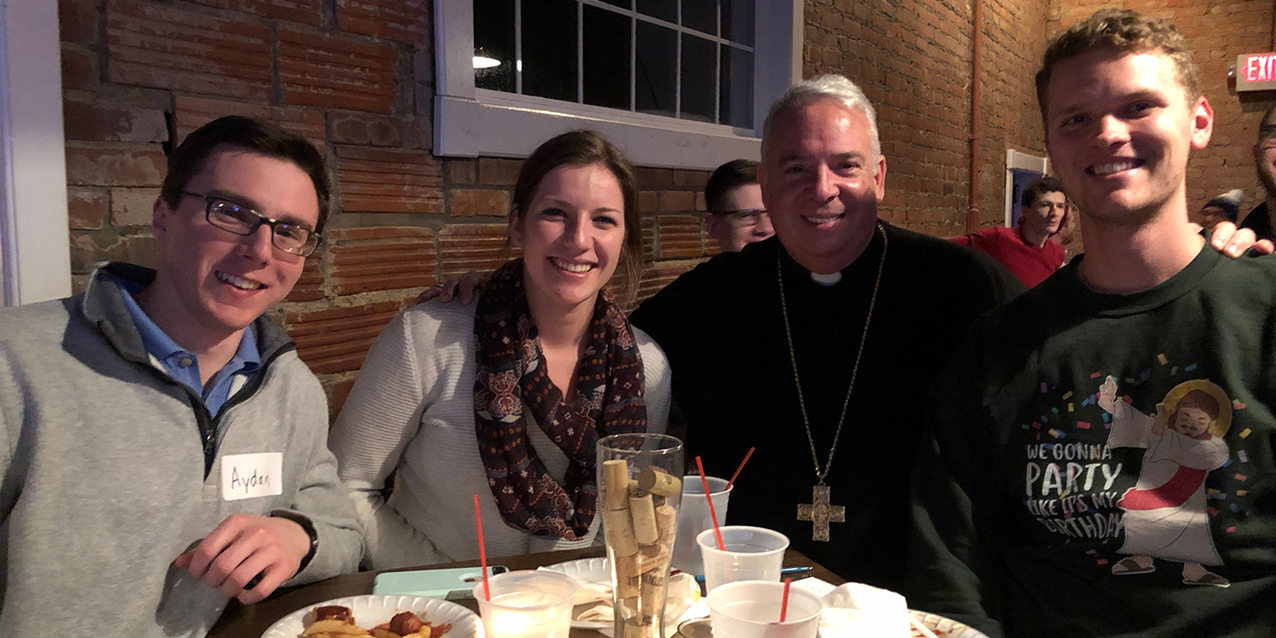 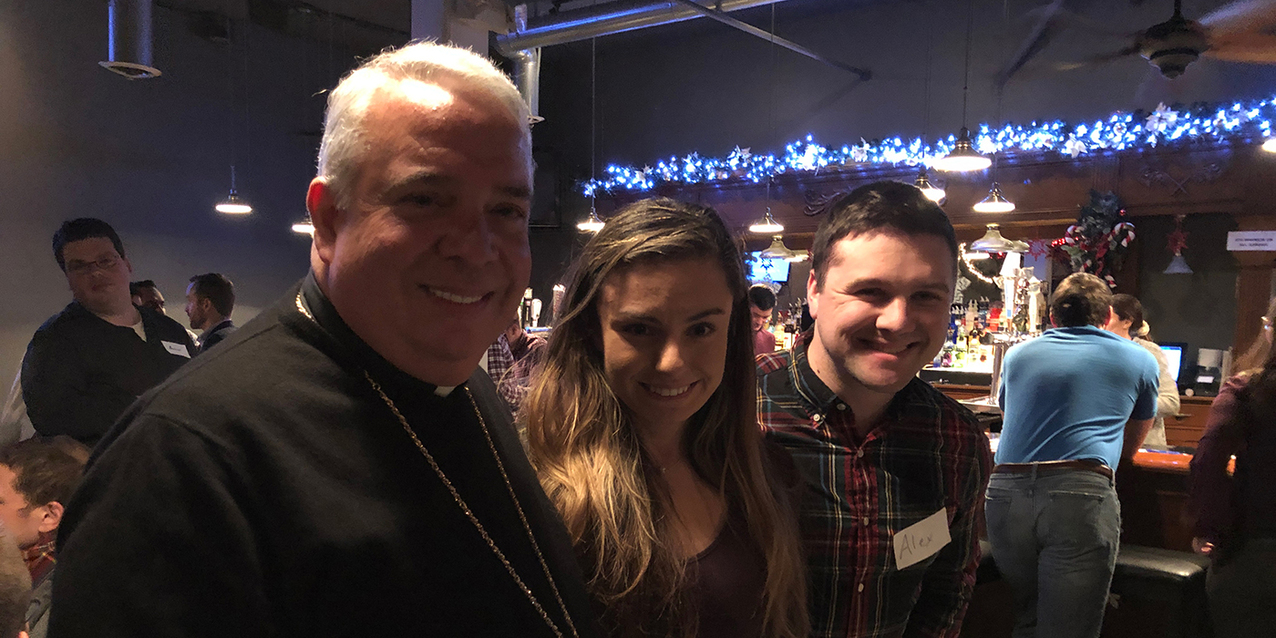 Since arriving in the Catholic Diocese of Cleveland in October, missionaries from The Culture Project have been speaking to students in elementary and high schools across the diocese on a variety of topics including Theology of the Body, social media and human dignity. Their goal is to work with students who are growing up in an “all-about-me culture” and help them to make informed decisions and uphold the dignity and potential of all people, especially with regard to sexuality.

On Dec. 18, local Culture Project missionaries had an opportunity to speak to their peers when they addressed the monthly gathering of the Theology on Tap West group. They discussed why being “in community” is so important.

As they spoke, Bishop Nelson Perez surprised attendees by joining the gathering. The bishop brought The Culture Project to the diocese. He was familiar with the missionaries and their work from his days in the Archdiocese of Philadelphia, where the group originated.

Missionary Andrew Benne talked about his own insecurities; how he is an introvert and how that led to him becoming what appeared to be a self-sufficient individual. While he was in the band in college, his relationships were superficial with the marching band as a common denominator. He wasn’t interested in getting to know anyone on a deeper level, Benne said, explaining that this stemmed from a fear of rejection, of not being accepted and a fear of failure. It wasn’t until he became involved with the Catholic community on campus that he realized his behavior really was all about him.

Benne said that when people are fearful, they think only about themselves and how things affect them. To become a part of a community means giving back to those in the community, he said, with the focus shifting outward to others and how you can help and serve them. Once that happens, fear will begin to dissipate because you are no longer focused on yourself but on others. God’s selfless love for us is what community is about and when we become selfless with our love to our community we become more like Christ, Benne added.

Laura Riebe, a second-year missionary and leader of the Cleveland team, talked about the realities of living in a community and some of the testing and training that Culture Project missionaries undergo. In addition, they adhere to four pillars: work, formation, prayer and community. Daily Mass and a daily holy hour are part of the prayer pillar.

Living in community brings some challenges, Riebe noted, since five people with different backgrounds and life experiences live together, often in small living quarters. That’s where they learn about community and what it means to give of themselves for others, learning to compromise and understanding that it isn’t all about them, Riebe added. In a good community, members will listen and be engaged in the interests of others in the community. True community means being vulnerable and allowing others to get to know you on a deeper level. Ultimately, the goal of a community is to help each other get to heaven, Riebe said.

Bishop Perez also addressed the group, echoing Riebe’s sentiments. He said that God chose to enter into human form in a community -- and in a “messy” way. God could have placed Jesus anywhere and in a perfect setting. Instead, he put him in a community that included Mary and Joseph. Jesus entered the world like any other human: he was born. And his birth wasn’t in nice surroundings; it was in a stable to a woman who had a suspicious pregnancy. Mary had to explain why she was pregnant – not by Joseph, but by the Holy Spirit – before the couple married.

Joseph and Mary worked through all of that because of their faith and their community, the bishop explained. He said this is a reminder and a message that the greatest things happen to us in a community and in the “messiness” of our lives.

Theology on Tap West meets the third Wednesday of every month at Around the Corner in Lakewood.

To learn more about other Theology on Tap groups, click HERE.