John Diemer, outgoing president of the First Friday Club of Cleveland, was beaming as he opened the Jan. 9 lunch meeting.

“Thank you for attending the 61st annual bishop’s address,” Diemer said to the sold-out crowd of 600 who packed the main ballroom at the Cleveland Marriott Downtown at Key Tower. “This is our largest crowd ever.”

A student from St. Martin de Porres, Cleveland’s Cristo Rey high school, offered the opening prayer. He was among dozens of students from elementary and high schools throughout the Catholic Diocese of Cleveland who attended the event. Representatives of the Byzantine Catholic Eparchy of Parma, including Bishop Milan Lach, SJ who heads the eparchy, also attended the program.

“I am thrilled to be here,” said Bishop Nelson Perez, who is in his third year as shepherd of the Diocese of Cleveland. “There is no place I’d rather be.”

The bishop spoke candidly on a variety of topics as he updated the group on what’s new in the diocese since he last spoke to the club a year ago.

“We have new leadership in education,” he said, introducing Frank O’Linn who serves as superintendent of Catholic schools for the diocese. “We are looking at ways to strengthen and ensure the future of Catholic education,” he added.

Also related to education, the bishop said schools throughout the diocese launched the Theology of the Body curriculum this school year. In addition, the diocese welcomed five missionaries from The Culture Project who are travelling to schools, parishes and organizations throughout the eight-county diocese to share presentations on developing relationships, chaste living, sexual integrity and other topics of interest to teenagers, young adults and parents. 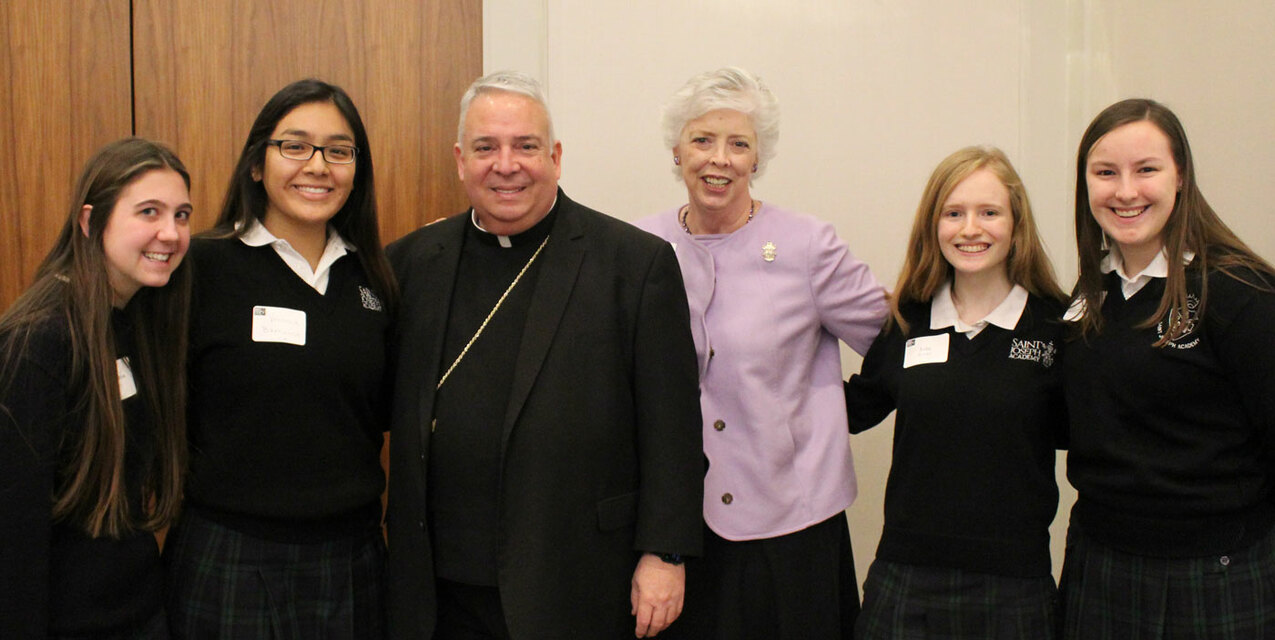 He also acknowledged other groups in the diocese including Marriages of Grace, which works with married couples to strengthen their relationships and build their faith lives.

“We are blessed in so many ways,” the bishop said. “We are preparing to ordain two new priests this spring – God willing.”

Bishop Perez also talked about follow-up from the V Encuentro, a multi-year program focusing on Hispanic Catholics. He played a major role in the nationwide initiative which had events at the local, diocesan, regional and national levels. Bishop Perez was among the Encuentro representatives who were invited to Rome in the fall to present their findings to Pope Paul.

In addition to his visit to Rome, the bishop also accompanied a group of 50 diocesan pilgrims on a 10-day trip to the Holy Land. He talked about how inspiring it is to visit the holy and historic places where Jesus and his disciples walked.

“There are churches built upon churches at these holy sites. It is so powerful to reflect on what happened there. The people and places came and went, but the Church continues to have a presence there,” he added.

Next was another trip to Rome in early December for the regular ad limina visit. Bishops from Ohio and Michigan provided updates on their dioceses, met with Vatican officials and had an opportunity to meet with the Holy Father.

“Everyone left – it was 15 bishops and the Holy Father in the room,” Bishop Perez said, recalling the lengthy, but informal session they had with the pope. He said they discussed a variety of topics and he informed Pope Francis that the people of the United States love him.

“I know,” the pope replied.

Bishop Perez recommended that the group read “Evangelii Nuntiandi (On Evangelization in the Modern World),” written by Pope Paul VI in 1975. He said it talks about reconnecting the Church with the world and its most important mission: evangelization. “You don’t even have to buy it. You can read it online,” he added.

The bishop noted how Pope Francis took the concepts of missionary and disciple and combined them, telling us we should be a community of missionary disciples. As such, he said we should:

“The diocese just opened a new Office of Missionary Discipleship,” he said, introducing its director, Miguel Chavez, who joined the diocese this week. His role will be to incorporate missionary discipleship into the diocese.

And he said the pope also spoke of his love for young people, referencing his post-synodal pastoral letter to the youth of the world, “Christus vivit (Christ lives).”

Bishop Perez said the Holy Father talks about how youth is a state of mind, not just a period of time. The bishop was named to a three-year term as episcopal liaison to the National Federation for Catholic Youth Ministry. He began his term in November at the national conference in Indianapolis, Indiana, which was attended by more than 20,000 high schoolers.

“I had the privilege of opening the conference at Lucas Oil Stadium,” he said, recalling how it was dark inside and he asked attendees to take out their cell phones and turn on the flashlight. “The place just lit up,” he said. “I told them ‘You’re not ‘nones.’ You’re young people of faith.”

Pope Francis calls on young people to be protagonists for change, pointing out they hold the future and encouraging them not to be bystanders in life but to get involved. And we need to stand with them, Bishop Perez said. “We need to help them to be strong and vibrant in their faith – to walk with them.”

He also reminded the group that they should never underestimate the power of God working in them, through them and sometimes despite them. There is an amazing spirit at work in the Church, he said. “And you’re all here because you were touched by Christ.”

In his closing remarks and blessing, Auxiliary Bishop emeritus Roger Gries pointed out that “the Spirit will be with you until you see the face of God. We’re never alone – the Spirit is always with us.”

Brandon Chrostowski, founder, president and CEO of EDWINS Leadership & Restaurant Institute, will address the club on Feb. 6 at the City Club of Cleveland. For more information or reservations, visit firstfridayclubcleveland.org or call 216-589-9852.