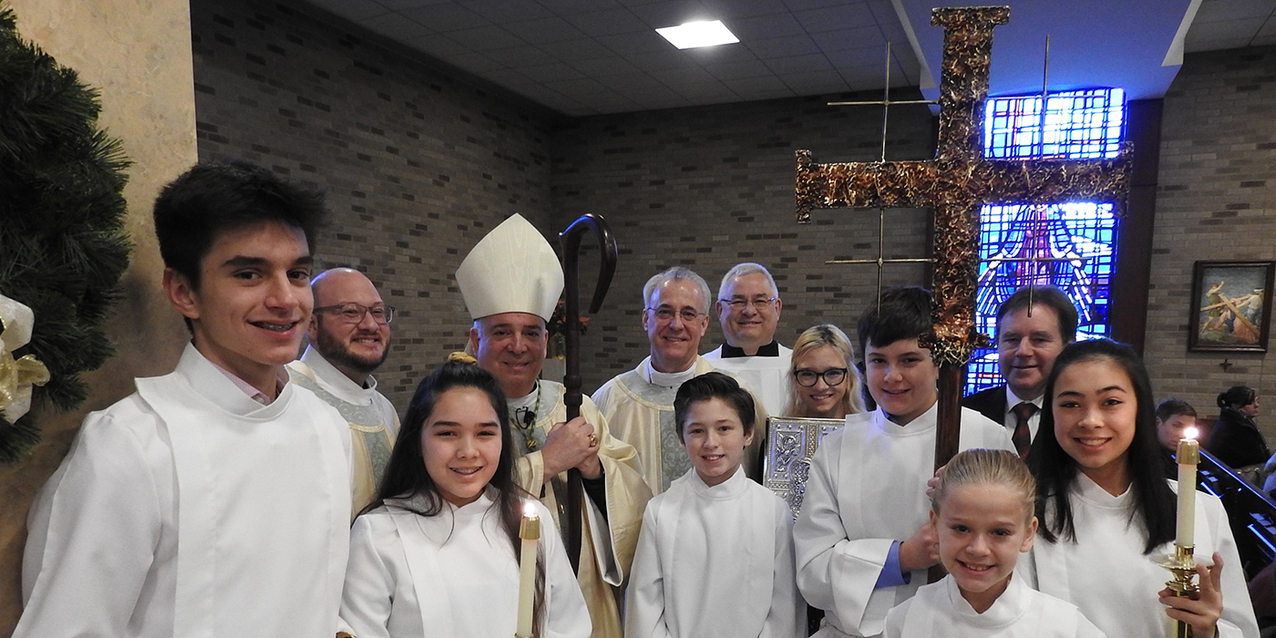 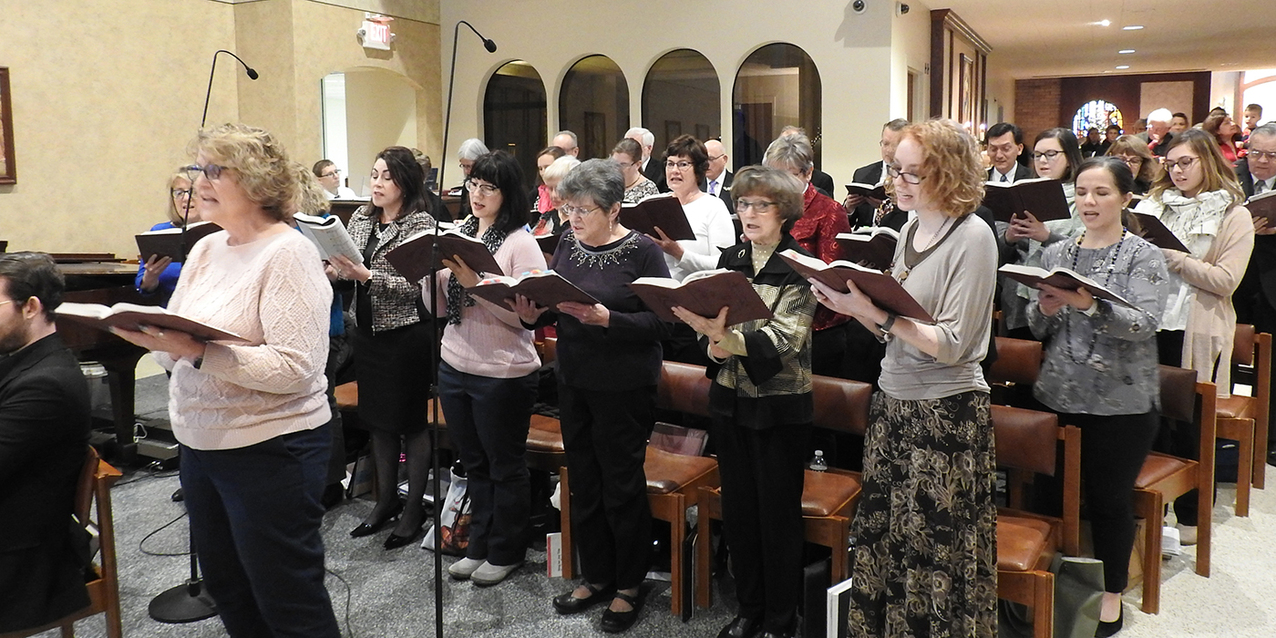 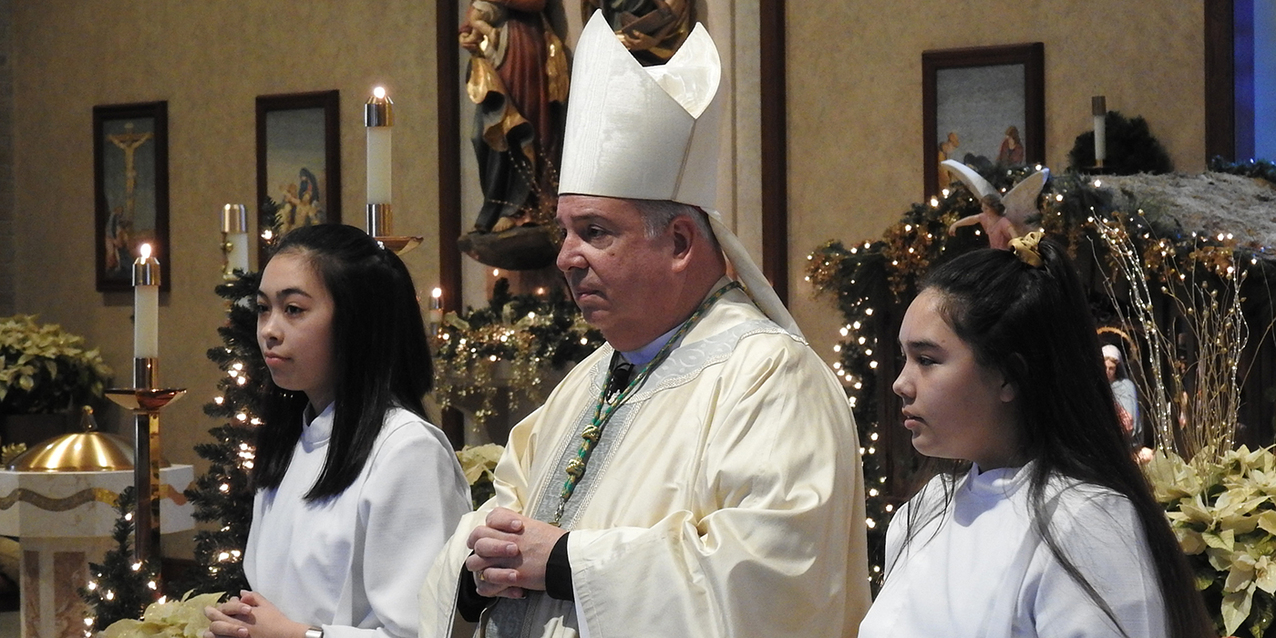 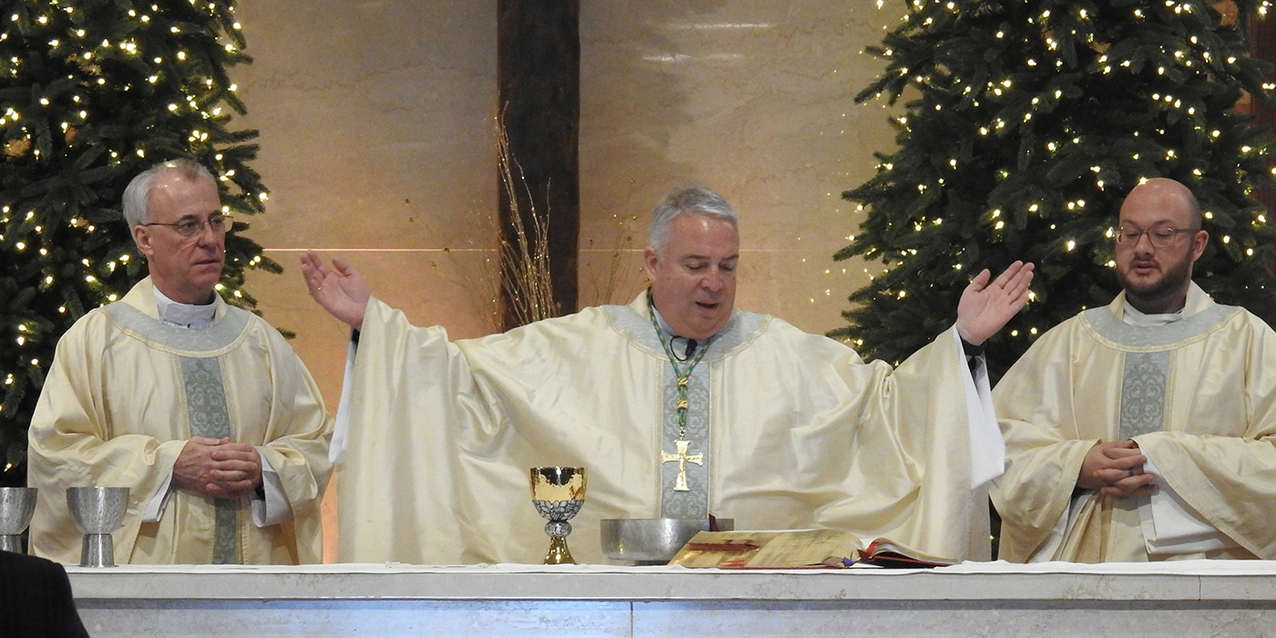 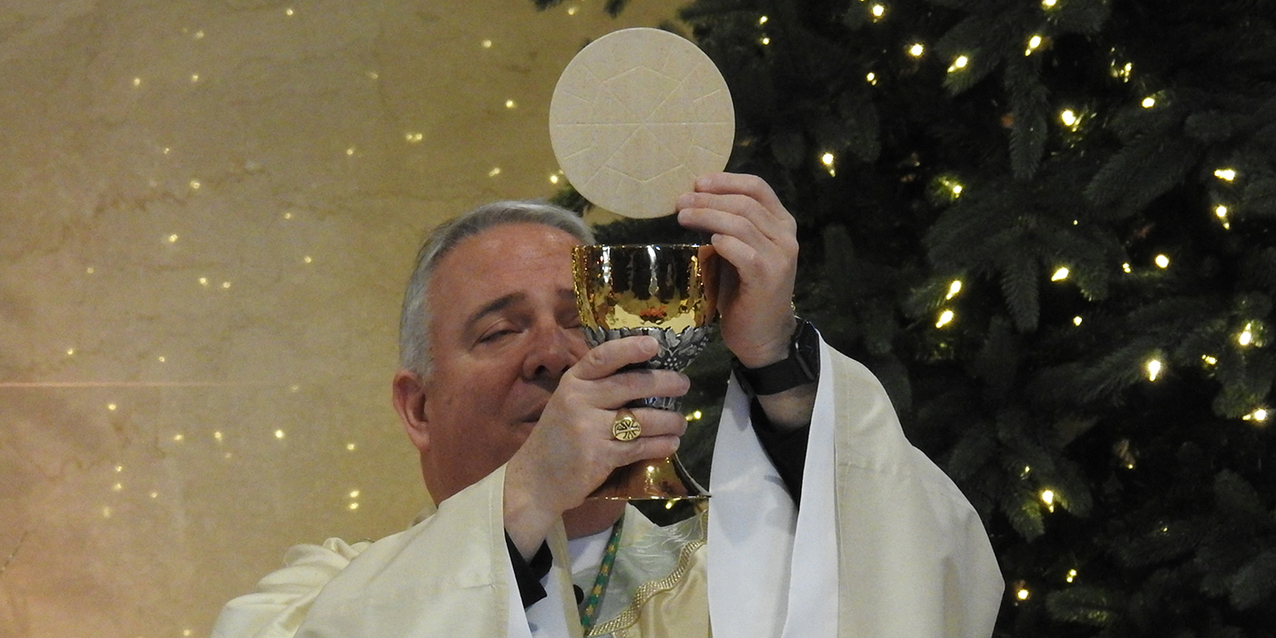 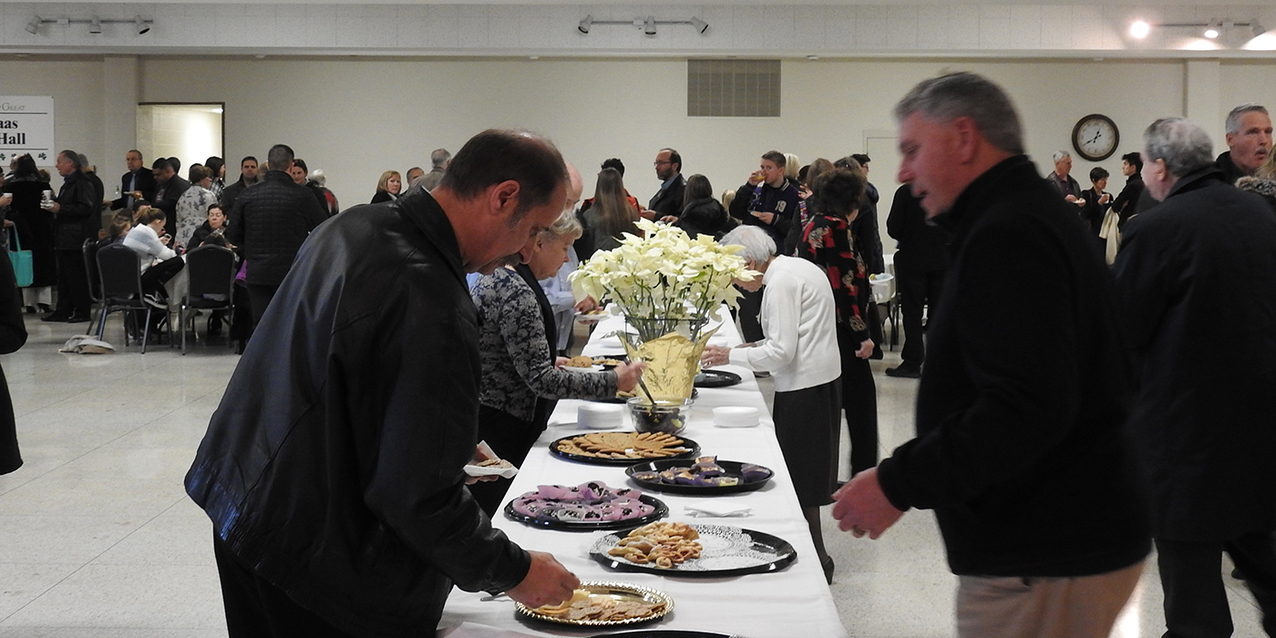 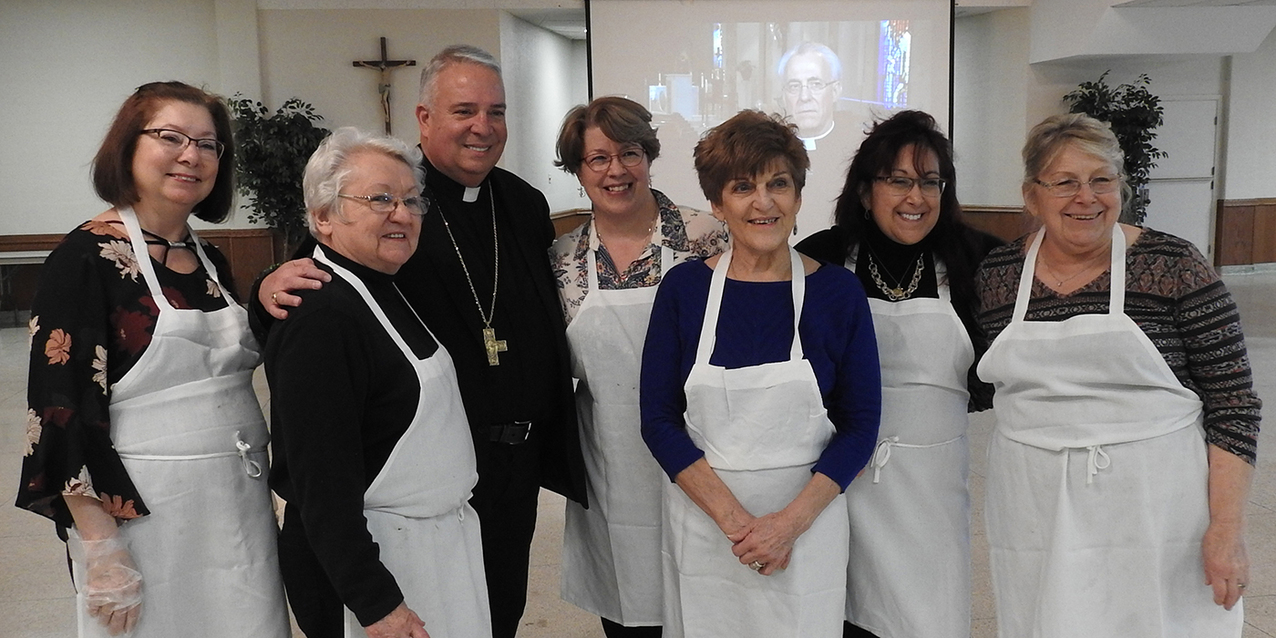 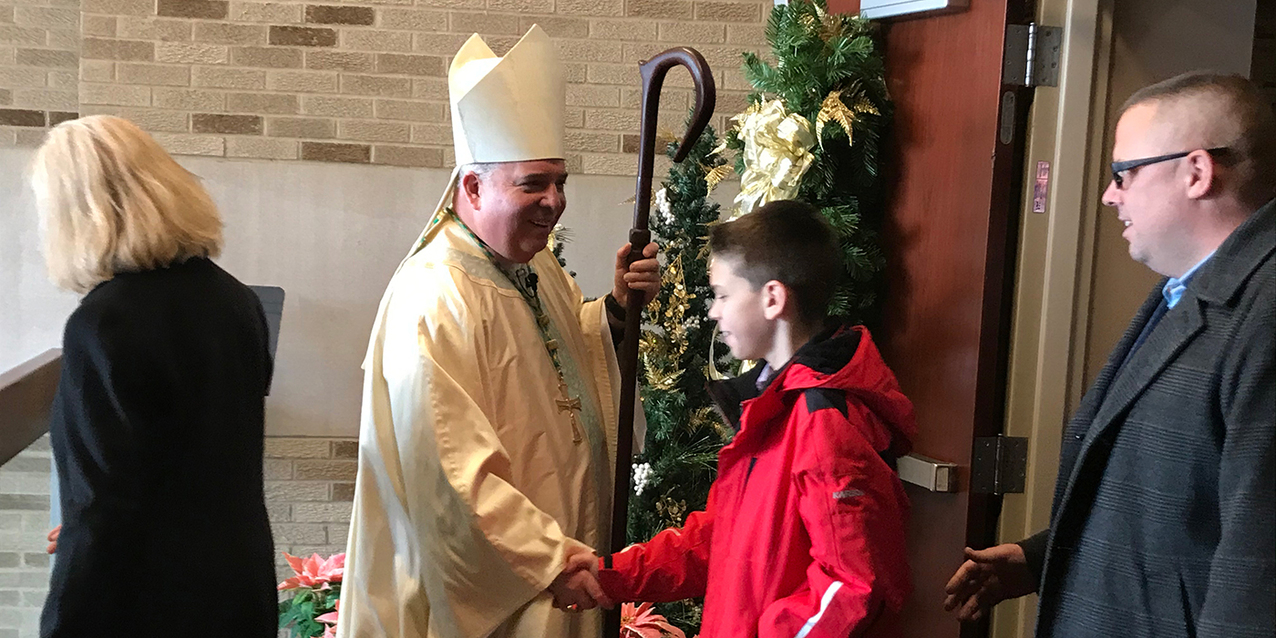 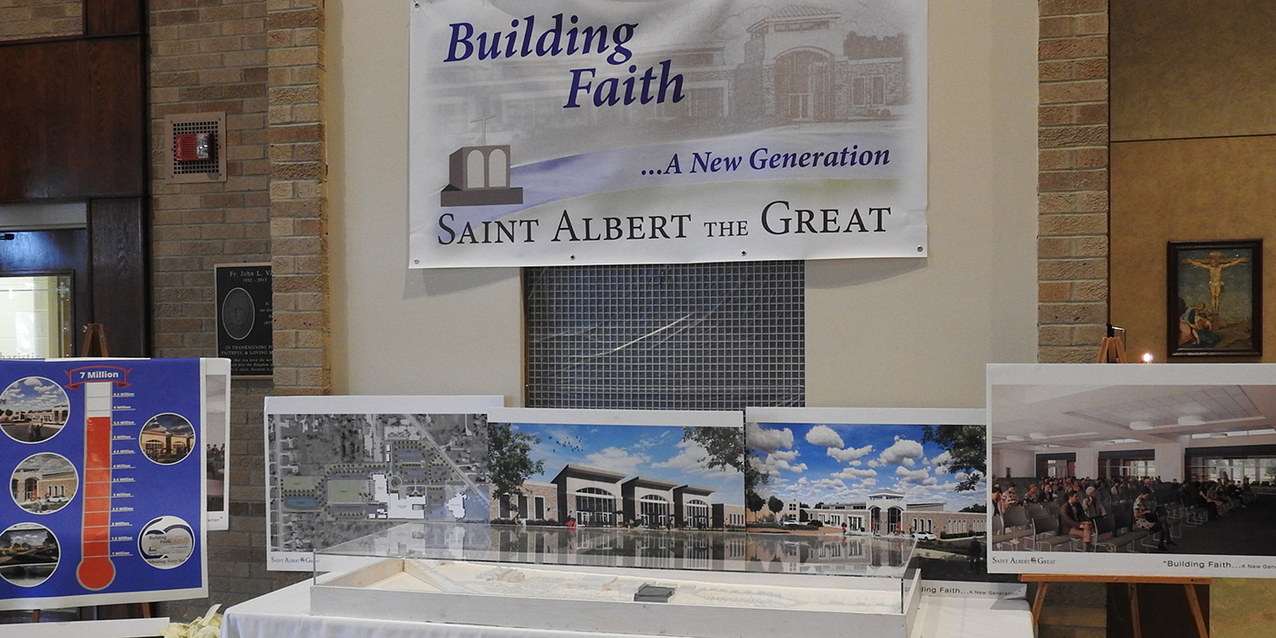 “The Church has asked a lot of me in the 30 years I’ve been a priest,” Bishop Nelson Perez told the congregation at St. Albert the Great Parish in North Royalton. He visited the parish on Jan. 12 to celebrate its 60th anniversary.

It actually was a double celebration because Father Ed Estok, the pastor, was marking 35th anniversary of his Jan. 12, 1985 ordination to the priesthood.

“I’ve been in three different dioceses, in different parishes and there have been changes in the Mass during those 30 years,” the bishop said. Because he is committed to a life of service to the Church, he said he has been moved around and put into various positions in different locations. “It’s like parachuting in. I just drop in. The Church is already there,” he said, noting that he just gets to work when he arrives at a new assignment.

Since “parachuting” into Cleveland almost 2½ years ago, Bishop Perez said he’s visited most of the 185 parishes in the Catholic Diocese of Cleveland.

“Three years ago, I had never heard of North Royalton, Ohio or St. Albert the Great Parish. But when I arrived, I heard about you. I heard you are a vibrant parish, filled with life. You are blessed. You’ve become a parish with vibrancy and that vibrancy results from what you’ve done for the past 60 years: celebrating the Eucharist,” the bishop said.

He told those assembled that before the church and school existed, a group of faithful Catholics gathered to celebrate the presence of Christ in the Eucharist at a public high school.

“The Father said to the people of North Royalton, ‘This is my beloved Son – listen to him,’ much like in today’s Gospel,” the bishop said.

He reflected on his recent trip to the Holy Land, where he visited the Jordan River. “It’s nothing like in the movies,” he said, explaining the river is dirty and shallow – maybe the width of four or five church pews – and soldiers from Jordan patrol one side while Israeli soldiers patrol the other side. “In the midst of that river, 2,000 years ago, the Father said, ‘This is my beloved Son with whom I am well pleased,’”

The bishop asked if anyone in the congregation had been at the parish’s first Mass 60 years ago. A few hands popped up. He acknowledged their contributions, along with those of Father Anthony Winters, the founding pastor. “They were the ones who began to shape this parish community,” he said.

The first Mass was celebrated on June 5, 1959 at North Royalton High School. In May 1964, work was completed on the basement church, which served as the worship space for 17 years.

Father John Viall was appointed parish administrator in June 1976. When Father Winters retired after nearly 19 years of service, Father Viall was named pastor. He embarked on a building campaign that financed a gymnasium and a new rectory. Work on a larger church was completed in 1981. Later, the old convent was converted to a rectory ad administration building. In 1988, a multi-year school renovation began that included a new computer room, new library, four additional classrooms, a school atrium and athletic fields.

An expansion and renovation of the church was completed in 1996.

The parish is in the midst of another capital campaign, “Building Faith: A new Generation St. Albert Campaign to Repair, Revive and Expand our Parish,” Father Estok said. He briefly updated parishioners on the progress of the campaign, which has raised about 75% of its $7 million goal. He said the campaign will ensure that the parish facilities, which are used heavily by about 1,000 people per day and about 3,000 during the weekend, will be ready to continue serving their needs for the next generation.

Bishop Perez reminded the congregation that they come and go, as do church buildings. “But the mystical presence of Christ in the Eucharist remains. You have a great school, staff and buildings, but the Eucharist touches more hearts than anything else you do. It’s where we’re fed on our spiritual journey,” he said.

The bishop told those gathered that Pope Francis talks about a parish being in the midst of the homes of its sons and daughters. “A church is a sanctuary where we quench our spiritual thirst. Only God and you know what is in your heart as you’re here today. You come here searching, seeking and thirsting for the transcendent presence of God.”

St. Pope John XXIII said the Church needed “to be aired out” and he began that journey, which continues today. “This parish was founded as that began,” Bishop Perez said.

He also spoke about how Pope Francis meshes the terms missionary and disciple – words that have two different meanings. When he was young, bishop said he thought of missionaries as people who went to other countries, to faraway places -- but Pope Francis combined the words.

A disciple follows a teacher and the ultimate teacher is Christ, the bishop said, describing a missionary and a disciple “like two sides of the same coin. Since its inception, the Church has been a community of missionary disciples,” he added.

Bishop Perez said the St. Albert the Great community knows what this means -- and they do it. He said the identifying characteristics of a missionary disciple are taking initiative, being engaged with the community, accompanying people, being fruitful and being joyful.

“You’re taking this community to another level,” he said, referring to the parish capital campaign. “You’re preparing to give a gift to the next generation; you’re doing what those before you did for you.”

He reminded them also that a church is not just a place we go to, it’s a place from which we go.

“Thank you, Bishop Perez, for ‘parachuting in’ to celebrate with us,” Father Estok quipped.

The congregation recited the parish anniversary prayer before the final blessing – and before the bishop told them, “Go.”

A reception that included photo opportunities with the bishop took place in the parish hall.