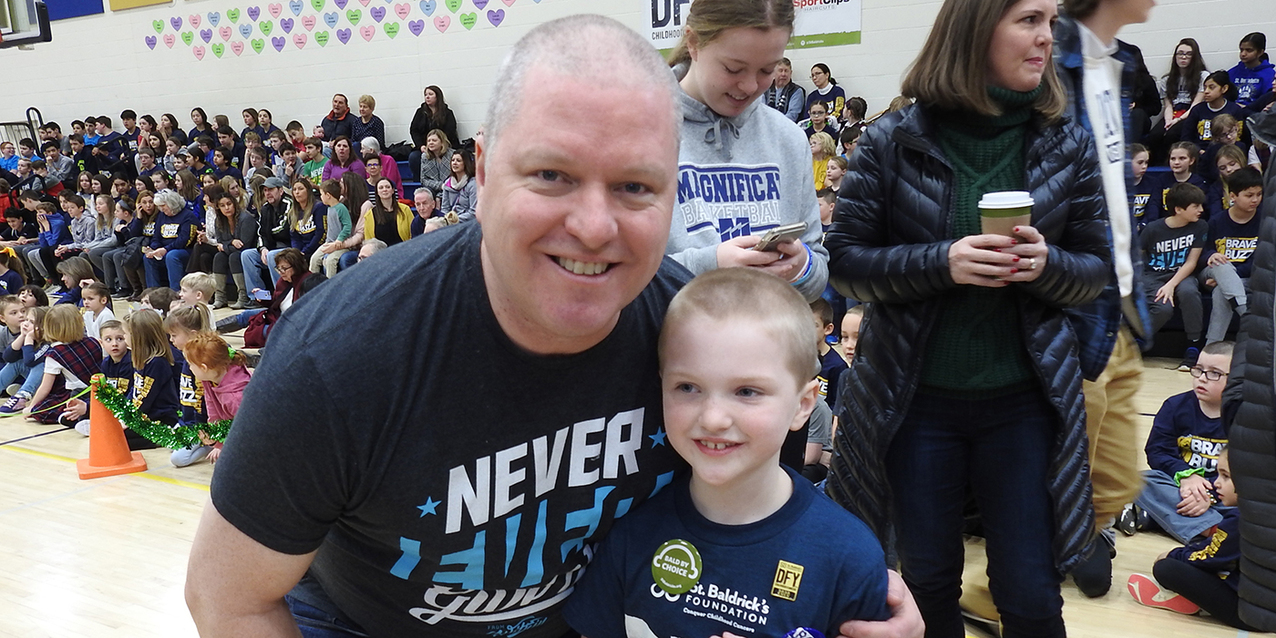 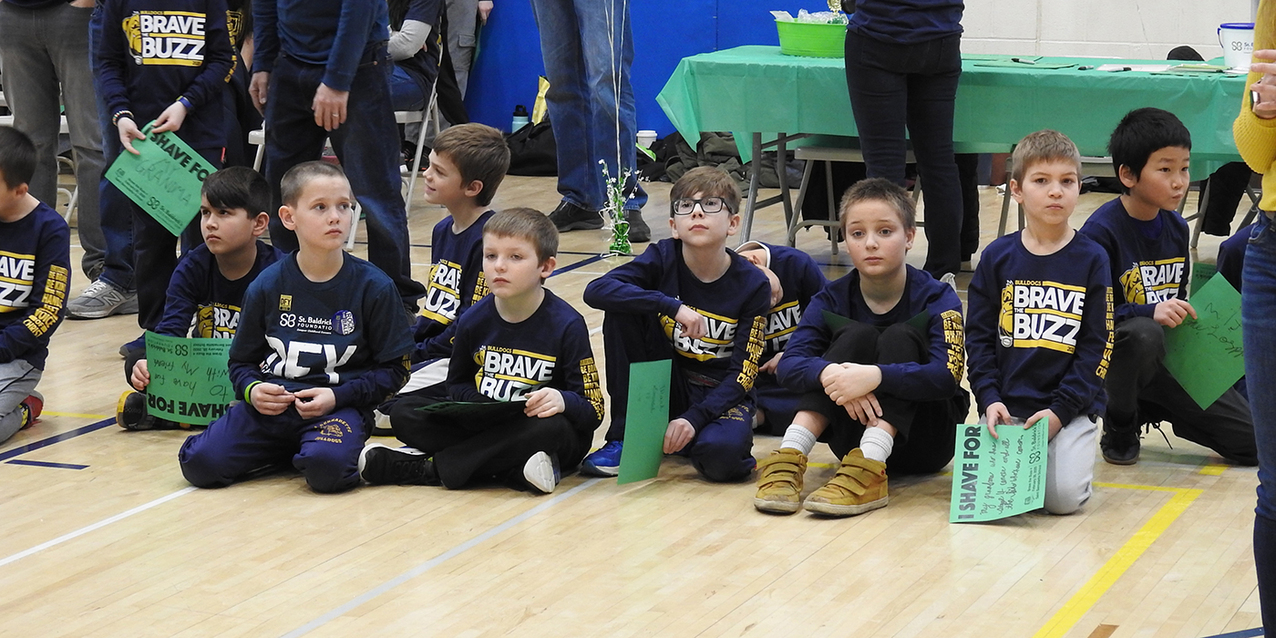 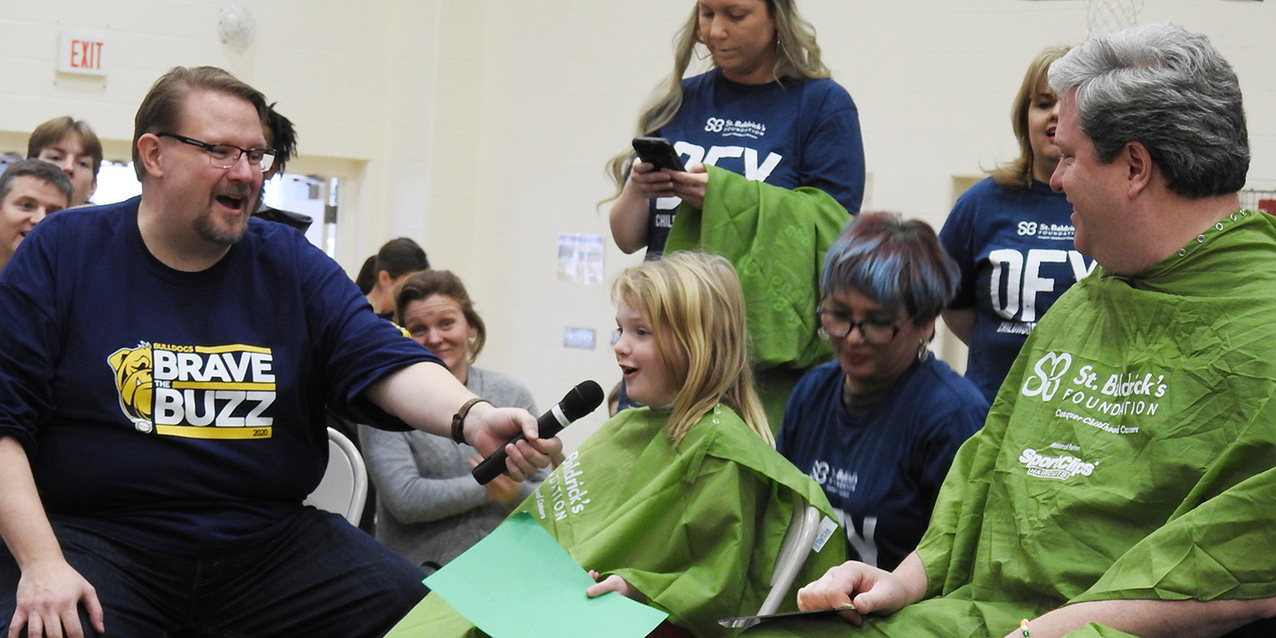 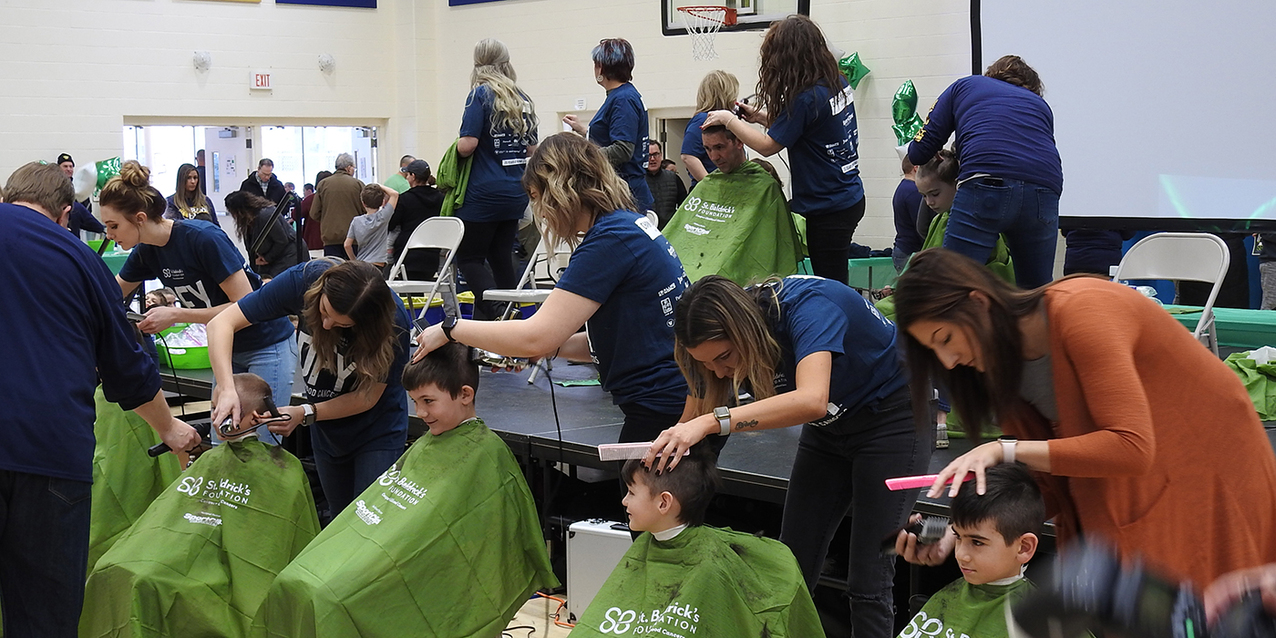 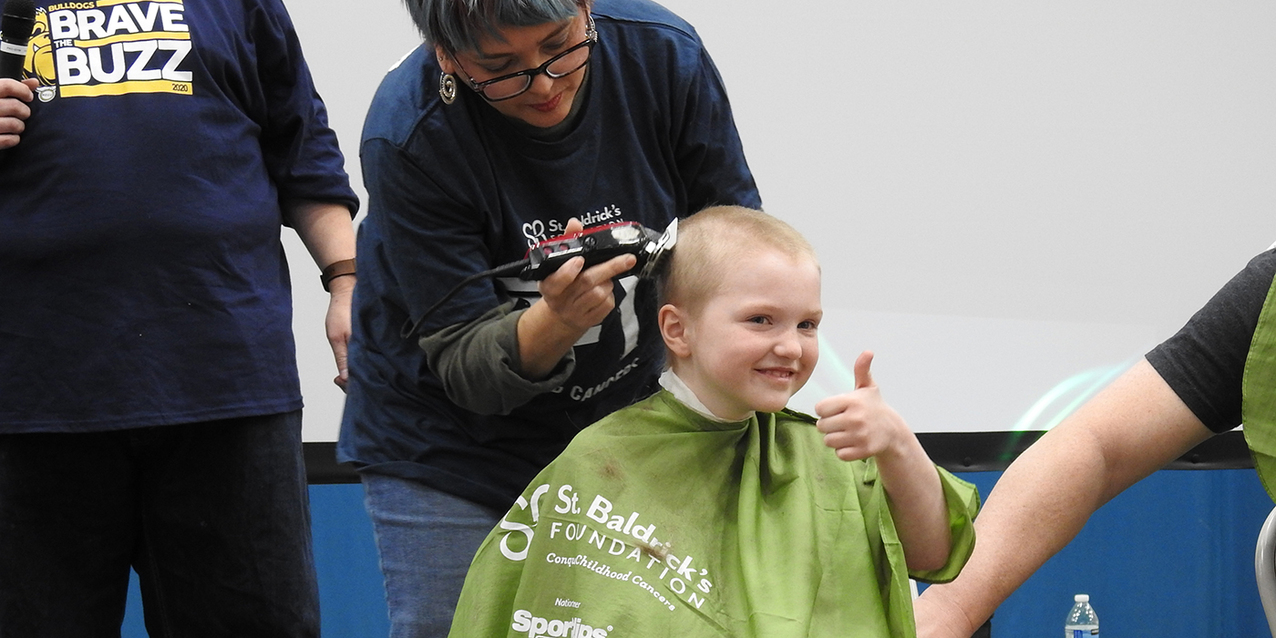 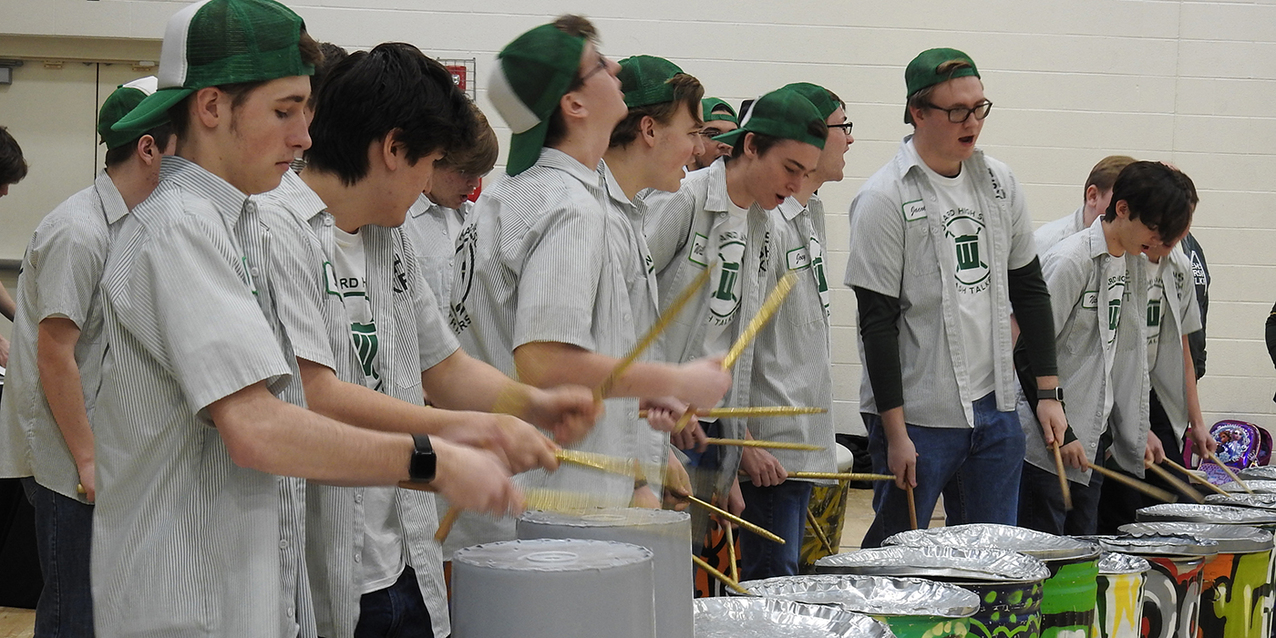 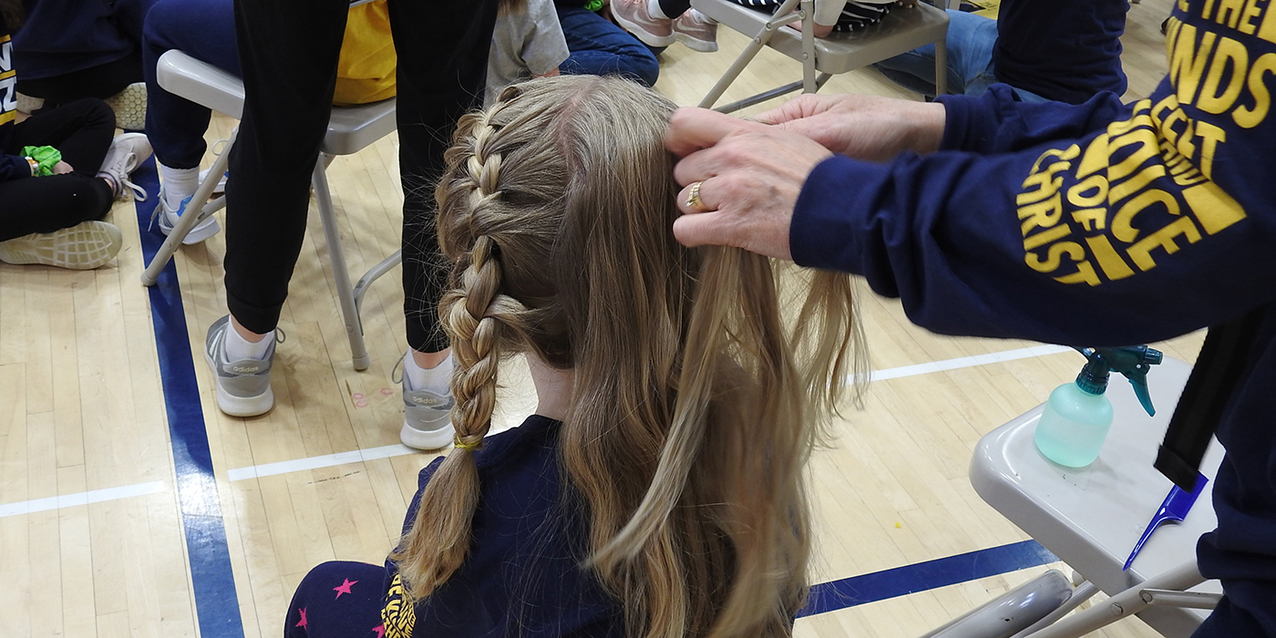 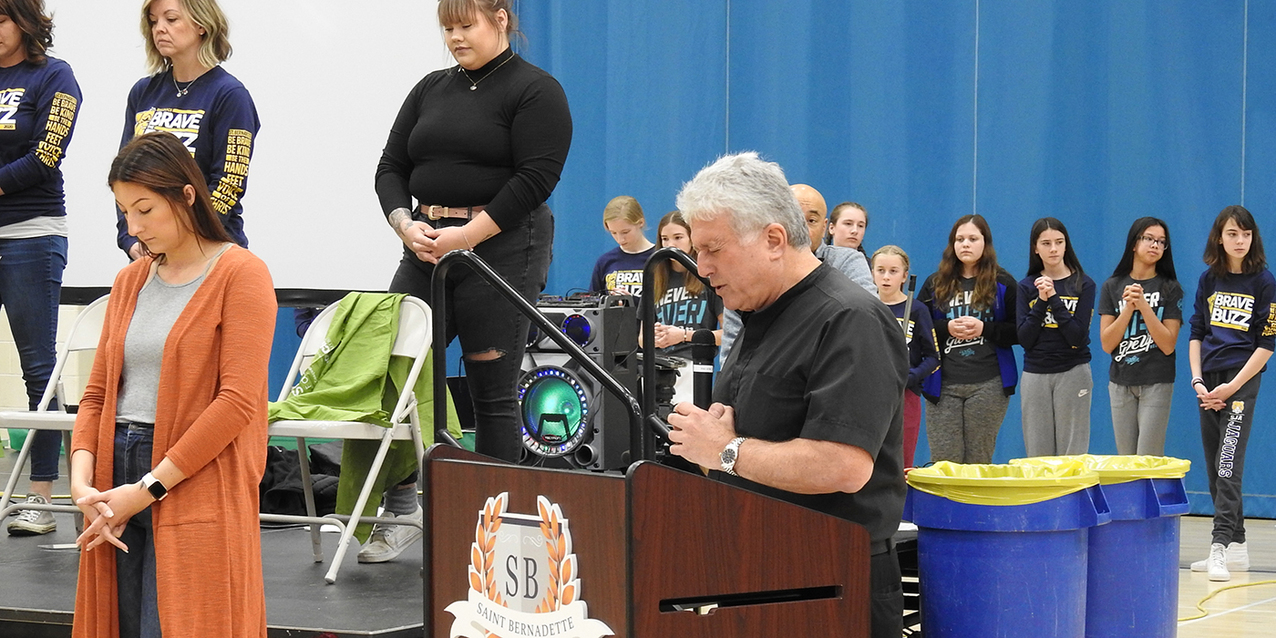 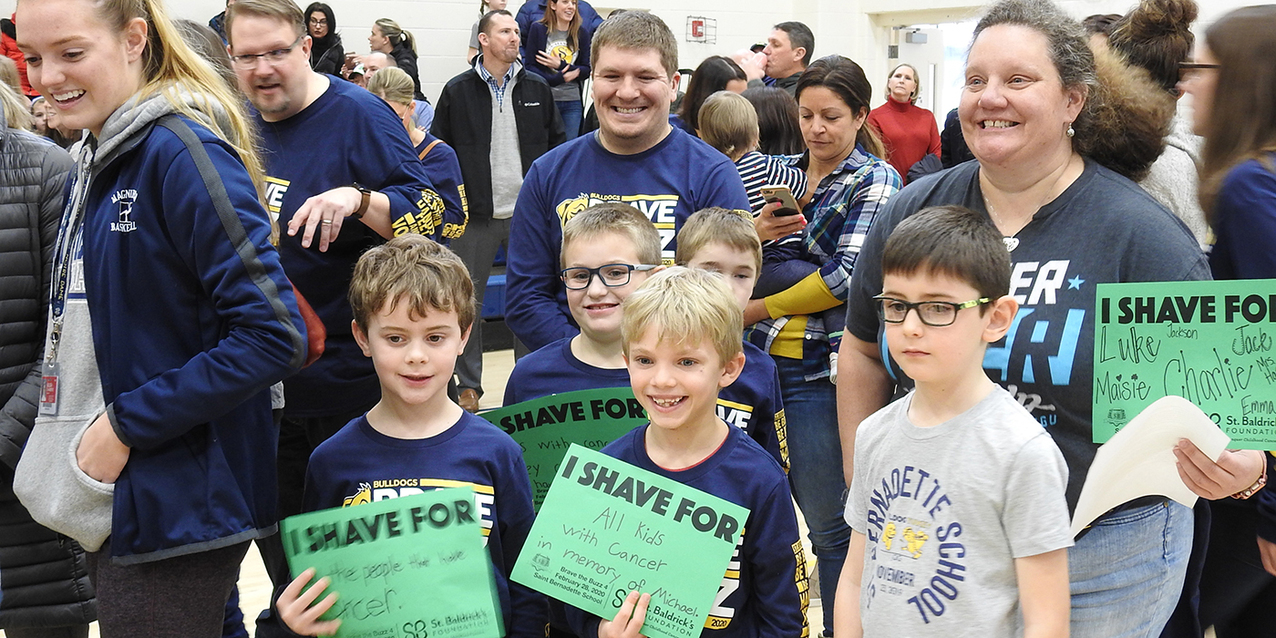 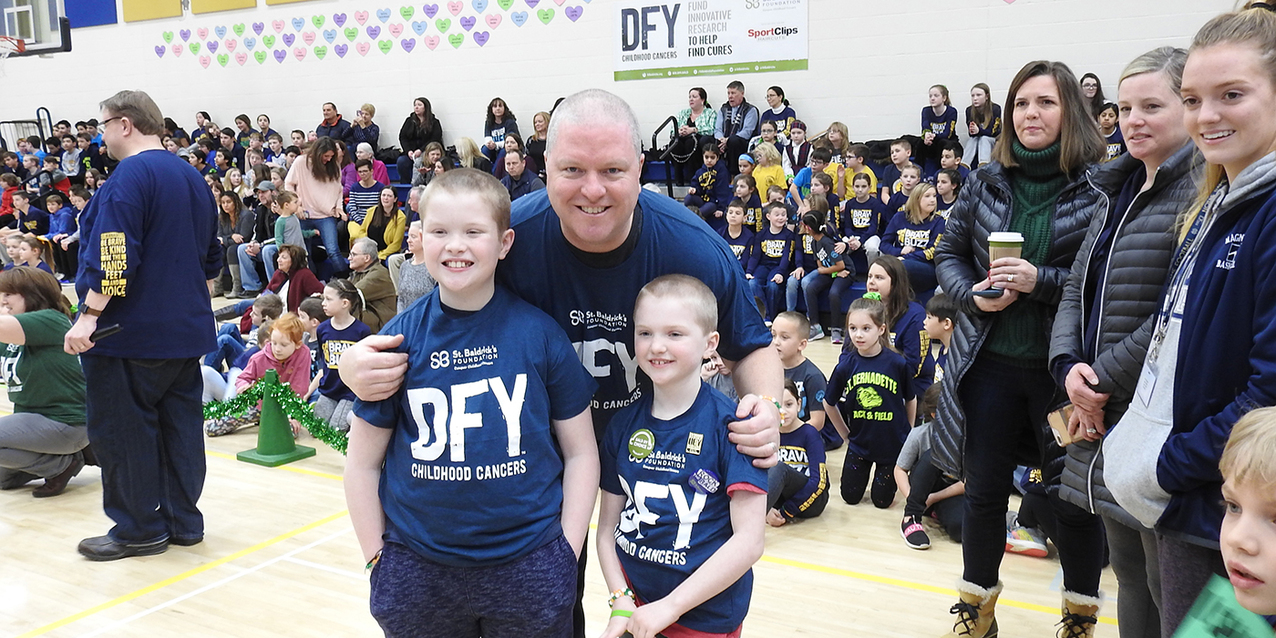 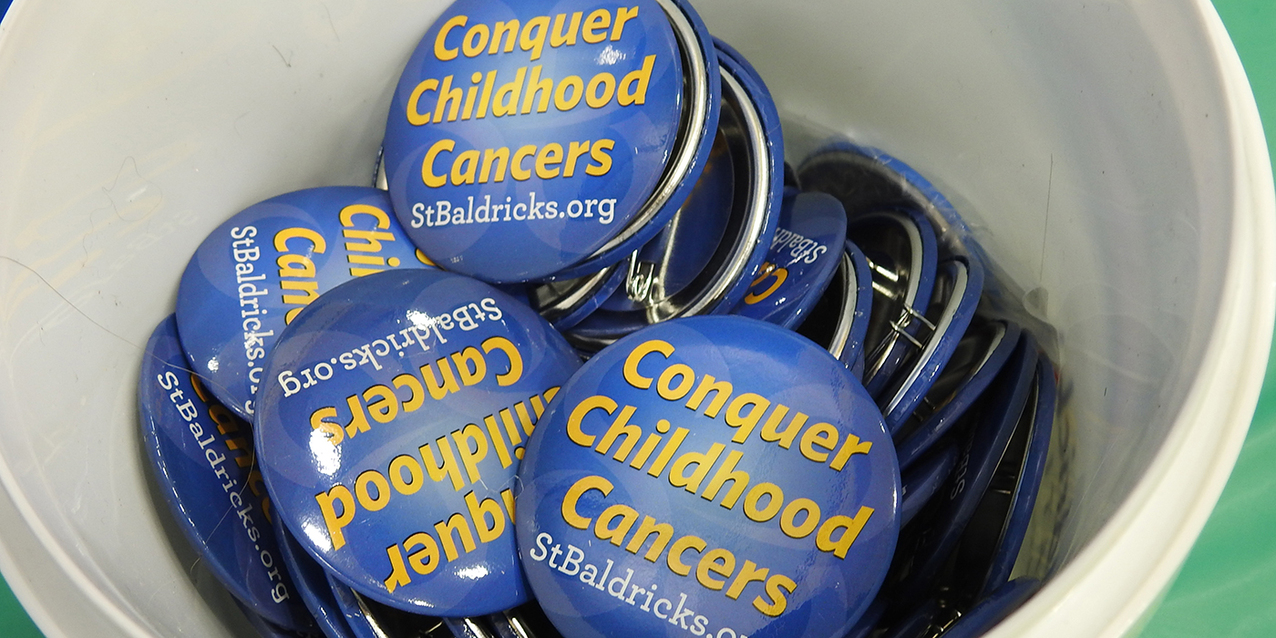 The hallways and classrooms at St. Bernadette School in Westlake were quiet and empty on Feb. 28.

But it was a different story in the school gym where the school’s nearly 500 students, teachers, many parents and other supporters gathered for Brave the Buzz 4. Many were wearing navy blue and gold BB4 T-shirts, one way to support the event that raised funds for the St. Baldrick’s Foundation, a nonprofit organization that supports childhood cancer research.

At St. Bernadette, the cause hits close to home since one of their students, Michael Orbany, died in 2014 from medulloblastoma at age 9. Many BB4 attendees also wore shirts bearing the message NEGU (Never Ever Give Up), a slogan adopted Michael and his family. Some of his family members attended the Feb. 28 event, which had a $60,000 goal. A teacher at the school also is battling cancer.

Father Phil Racco, St. Bernadette pastor, opened the program by recalling his first meeting with Michael and his family.

“When I learned (in 2010) I would be the pastor at St. Bernadette’s, I had heard about Michael. He was the first person I told I would be coming here,” Father Racco said. “Michael is now our angel in heaven,” he added.

After prayer, Assistant Principal Bart Chatfield took over as event emcee, acknowledging the participants and volunteers who made BB4 possible, including the stylists from several area salons and barber shops – Reagle Beagle, Bella Capelli, Ichiban, Brandon’s Barber Shop, Persist, Wise Guys and Ashley Adams Salon. Two rows of stylists lined the stage and the floor in front of the stage, clippers in hand, awaiting the more than 100 people who volunteered to have their heads shaved for the cause.

One of the first shavees was second-grader Maggie Chambers, who also was the event’s top fundraiser. Maggie raised more than $5,000, according to her dad, Bill Chambers, who sat next to her, holding her hand and offering moral support as her shoulder-length, strawberry blonde hair was cut and then her head buzzed by a volunteer stylist. The crowd chanted and cheered her on. As the stylist made the last few passes on her scalp, Maggie gave a thumbs-up and smiled. After leaving the stage, she headed to the area where shavees posed for “after” photos.

Bill Chambers was in the next group of shaves and his fifth-grade son, Jack, also had his head shaved. It was the second year for Chambers and the third year for Jack to have their heads shaved for the cause. In addition to Maggie’s fundraising efforts, Team Chambers was the top fundraising team, collecting more than $7,445 for BB4.

In addition to those having their heads shaved, the event offered other ways to support the cause. Some girls who made donations had their hair braided by volunteers. Some students also made hair scrunchies and bracelets which were sold as a fundraiser for BB4. And students could make a dress-down donation to help support the cause. Students who made donations or had their heads shaved could wear St. Bernadette Bulldog spirit wear, including BB4 or NEGU T-shirts.

Dozens of volunteers assisted with the event, including many parents and staff members at the school The Buzz 4 Core Committee included Mary Sue Anders, lead organizer and treasurer; Debbie Chinchar, treasurer; Mary Beth Sullivan, shavee recruiter; Mandy Sinchak, barber coordinator; and Jen Niehaus, volunteer coordinator. Students and parent volunteers helped sweep hair up after each group of shaves. They also helped sell “Lucky Charms” after weekend Masses, distributed posters and brochures throughout the community, greeted guests at the event, distributed T-shirts, helped coordinate shaves, speakers, activities and other functions at the event and coordinated and cleaned up refreshments and lunch.

Because the event met (and surpassed) one of its fundraising goals -- $40,000 by Feb.26 -- Principal Maureen Goodwin was taped to the gym wall after the head-shaving portion of the program.

Adding to the event excitement was an appearance and performance by the Trash Talkers of St. Edward High School. The St. Bernadette cheerleaders also performed during BB4.

The final tally is still being determined, but event organizers expect to meet the $60,000 goal.