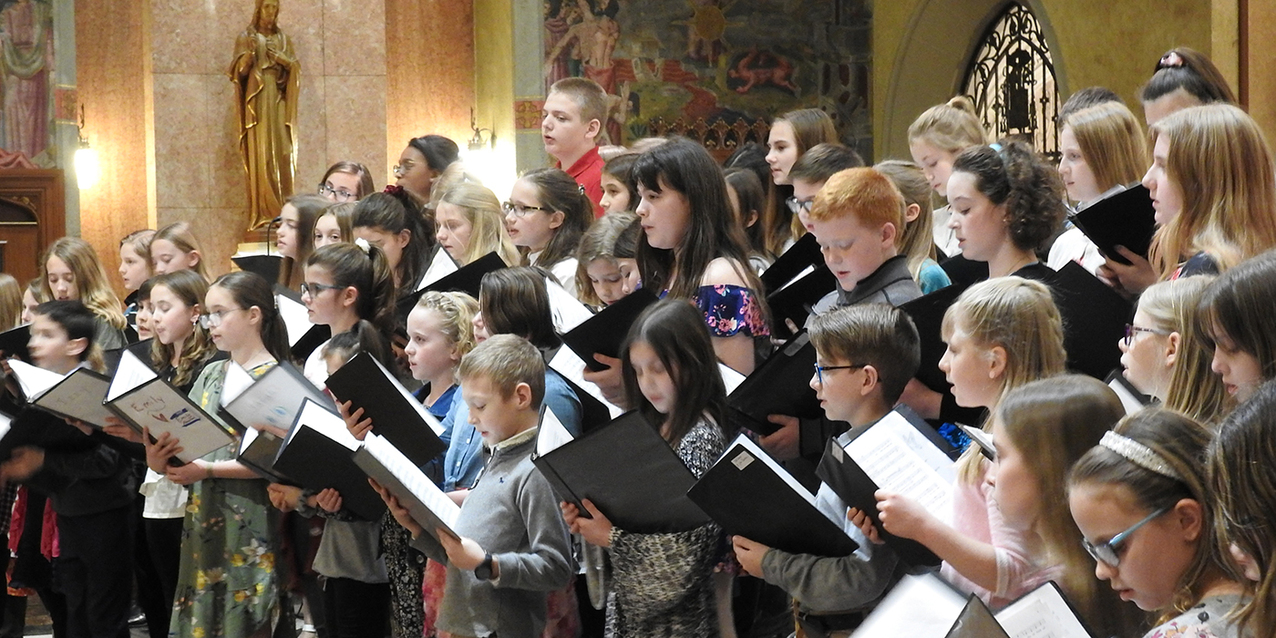 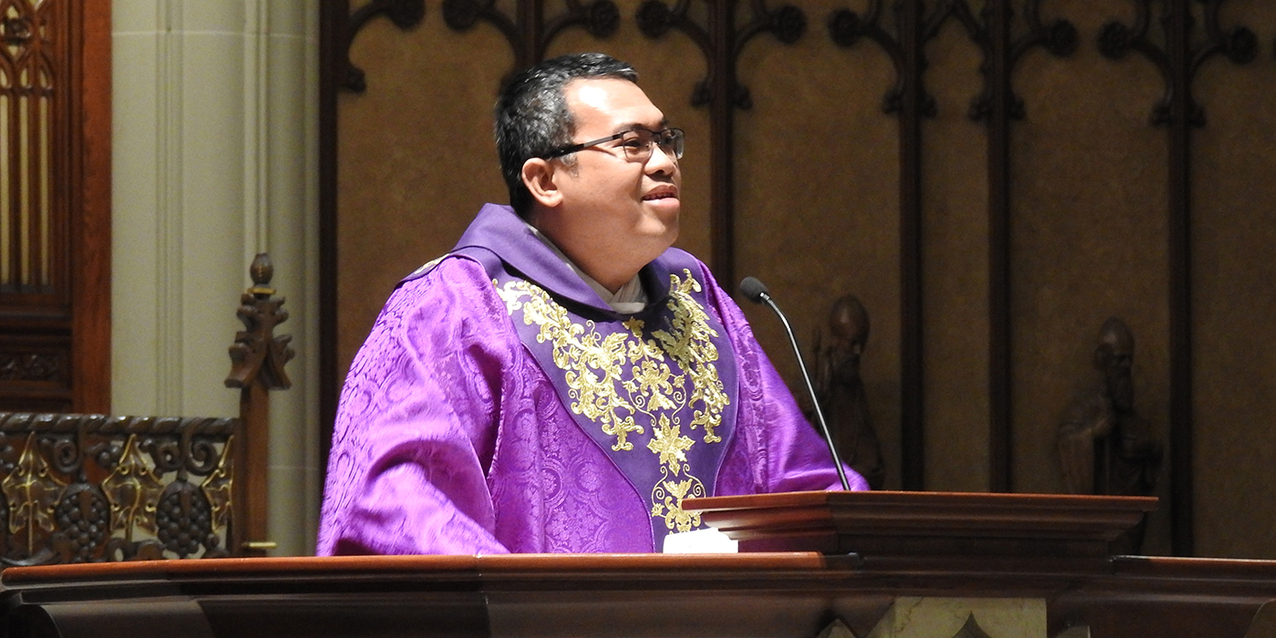 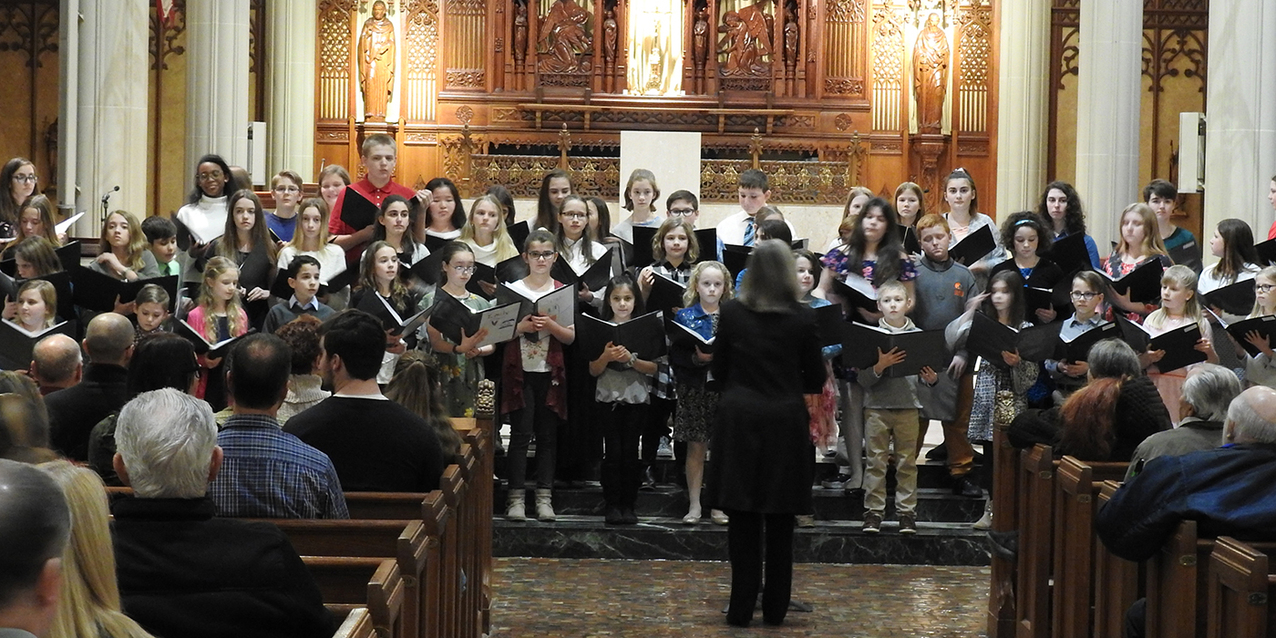 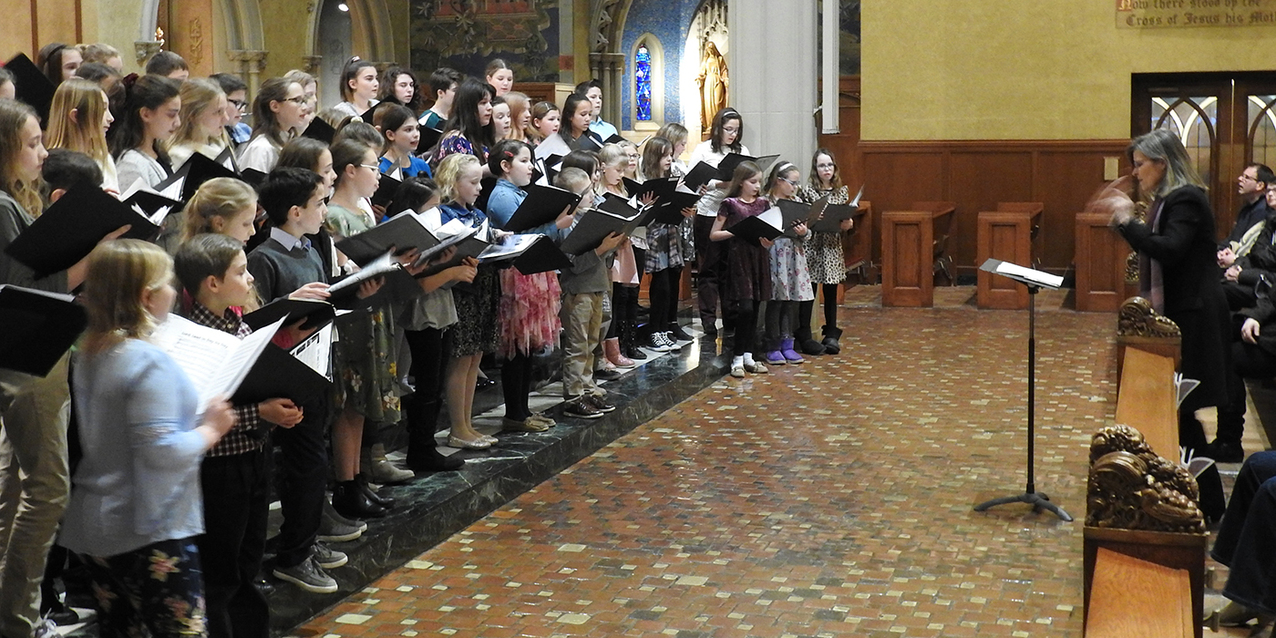 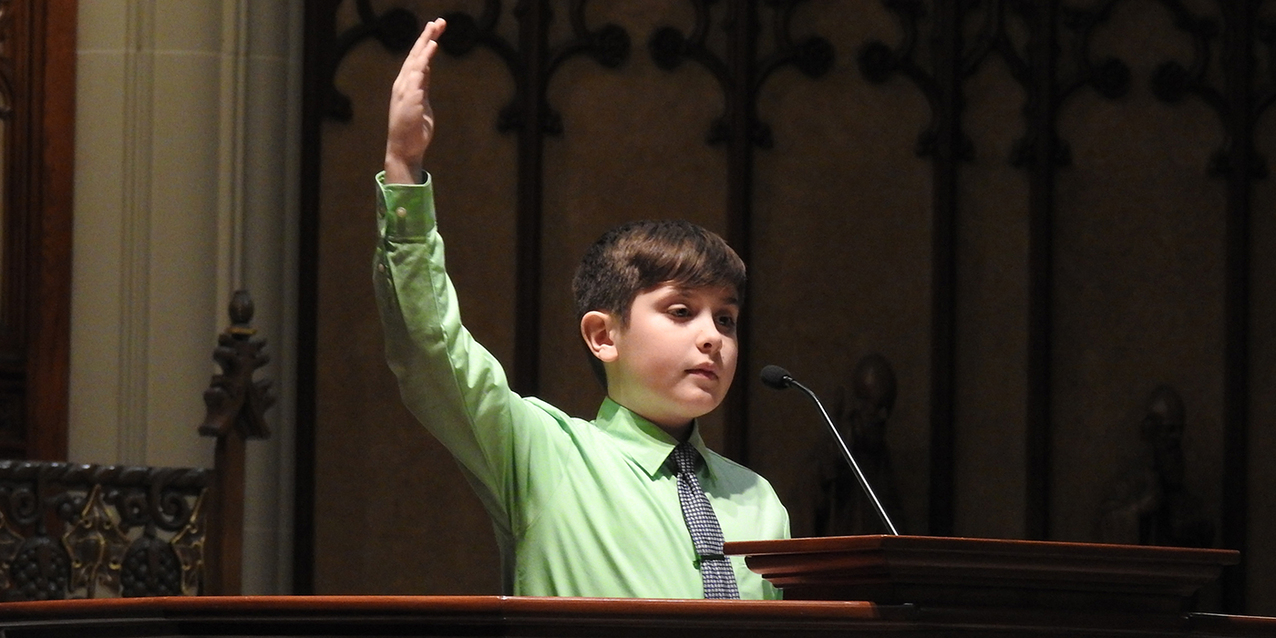 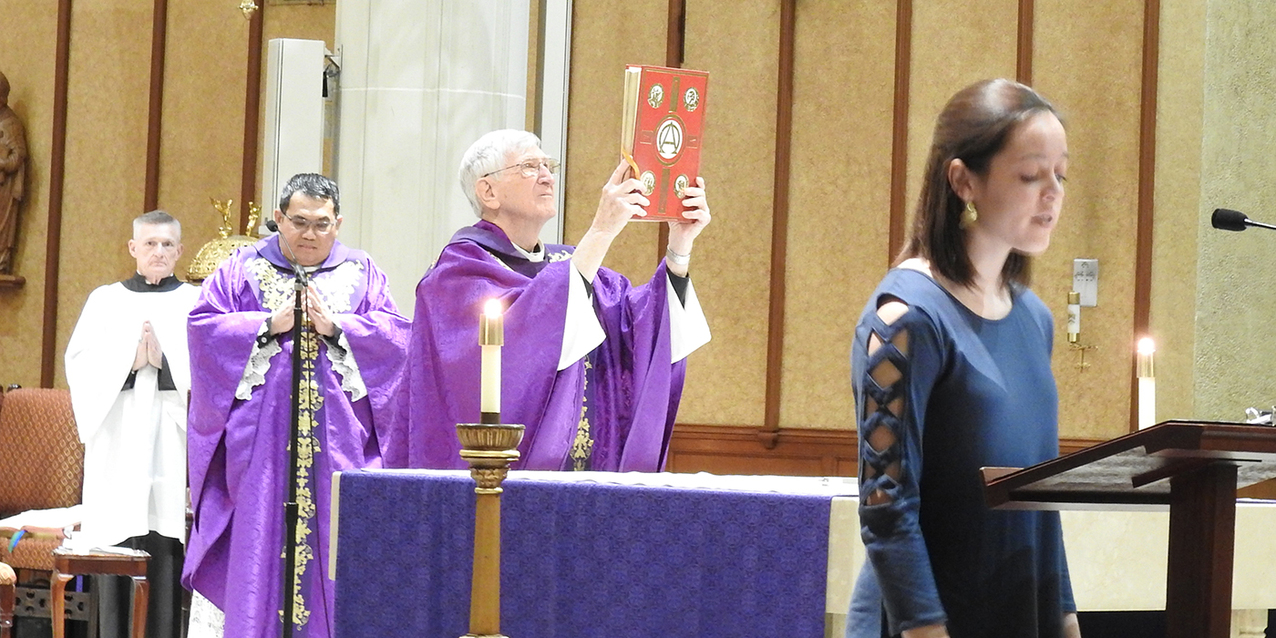 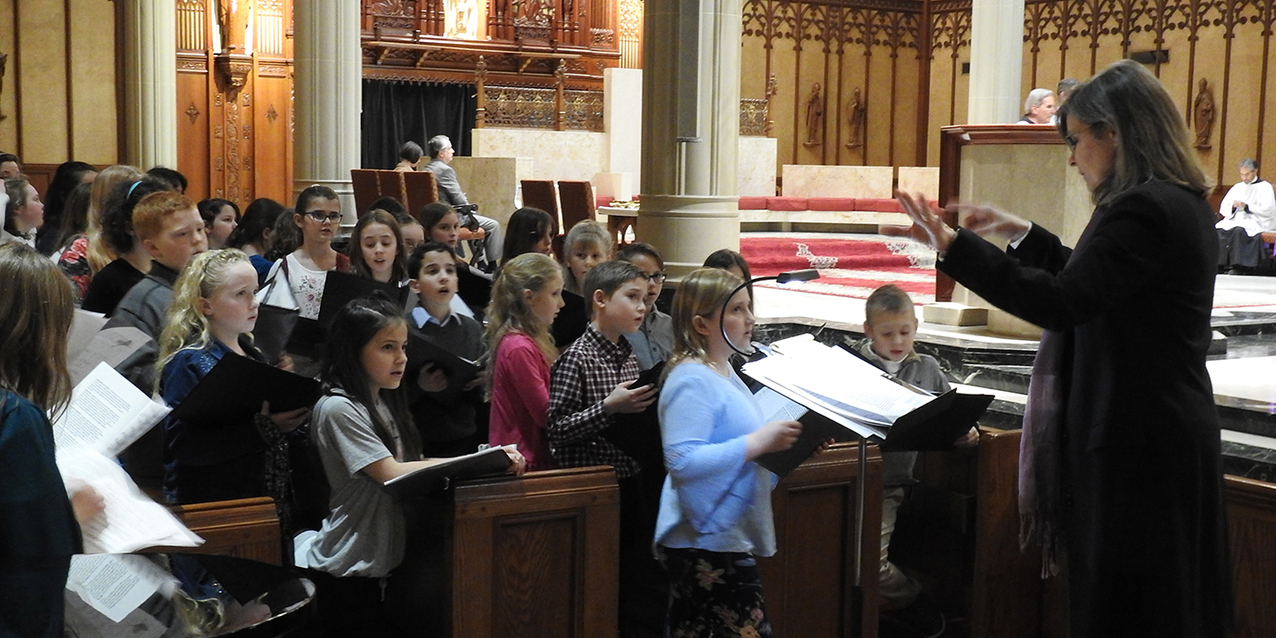 A daylong program of music that brought together about 70 children in grades 3-8 from eight parishes in Catholic Diocese of Cleveland culminated with the group singing at 4:30 p.m. Mass on March 7 at the Cathedral of St. John the Evangelist.

“What angelic voices,” said Father Arnel Lagman, celebrant of the vigil Mass, as he gestured to the Diocesan Children’s Festival Choir.

The choir gathered before Mass in front of the altar to sing some prelude music, including “Lord, Lead us Day by Day” and “A Mountain Psalm” (Psalm 121). The postlude, “Bwana Asifiwe (Praise the Lord)” was a Swahili song that featured some choir members adding percussion and hand gestures.

“We plan to do it again next year,” said Meg Matuska, director of music ministries at Communion of Saints Parish in Cleveland Heights and an organizer of the festival. It was the second year for the event.

Teri Larson, director of music at the Basilica of St. Mary in Minneapolis, Minnesota, was this year’s clinician. She spent much of the day rehearsing with the choir members and fine-tuning their numbers.

The choir gathered at 10 a.m. at historic St. Peter’s Church in downtown Cleveland to rehearse. After spending the morning in music, they took a break for lunch and walked to the cathedral about 1:30 p.m., where they continued to polish the songs they would be singing at Mass.

Matuska said it was a team effort to select the music for the festival. She worked with Larson and Greg Heislman, the cathedral organist and music director. Participating choirs rehearsed at their home parishes prior to coming together as a group for the festival.

“We try to choose music that is edifying for the children, doable in their parishes and that keeps with the cathedral tradition,” Matuska said.

Two choir members also served as cantors during the Mass, fifth-grader Irenaeo (Ren) from St. Matthew Parish in Akron and Emma Schoeffler from Communion of Saints. As is customary at the cathedral, parts of the Mass are sung in Latin, which didn’t faze the young people.

Matuska said the festival was made possible by support from the Catholic Diocese of Cleveland and the Cleveland Chapter of the National Association of Pastoral Musicians. Additional support was provided by three Knights of Columbus chapters: the James L. Martin Council 637 of Lorain; North Olmsted Council 4731 and the Ellet St. Matthew’s/Nativity of Jesus Council 4664, as well as Charlotte and Dennis Sideri.

Heislman said he was happy to welcome the children’s choir back to the cathedral. They are among parish choirs from throughout the diocese that reserve a time to sing at the vigil Mass.

“We had about a dozen more participants this year,” Matuska said. “I’m hoping to keep it growing.”