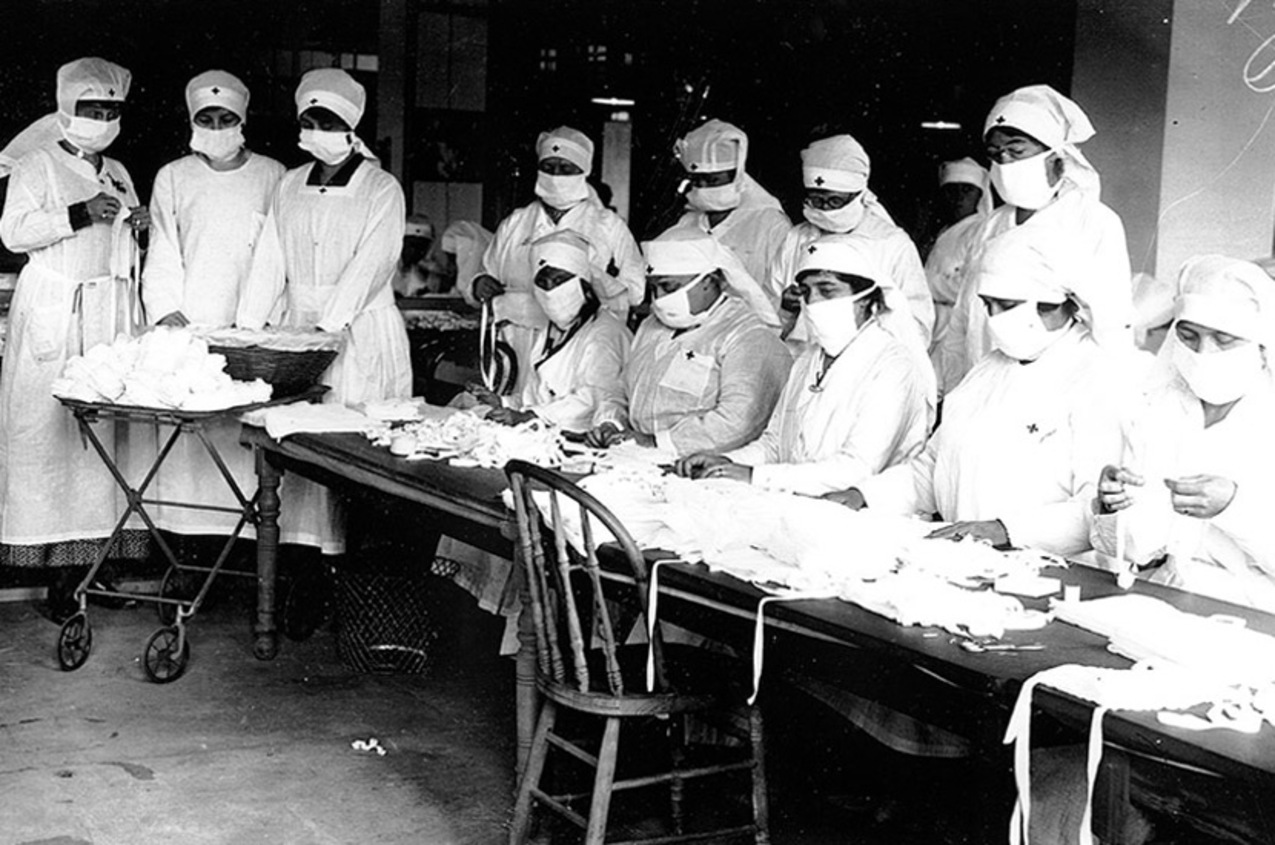 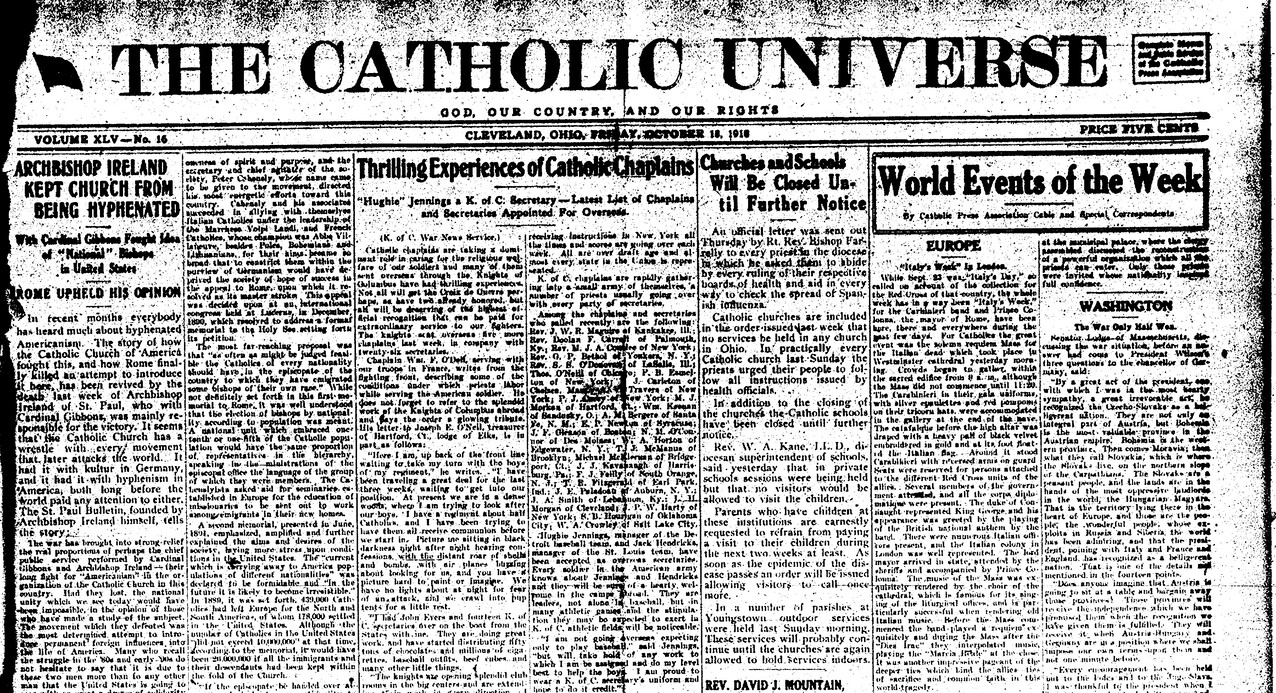 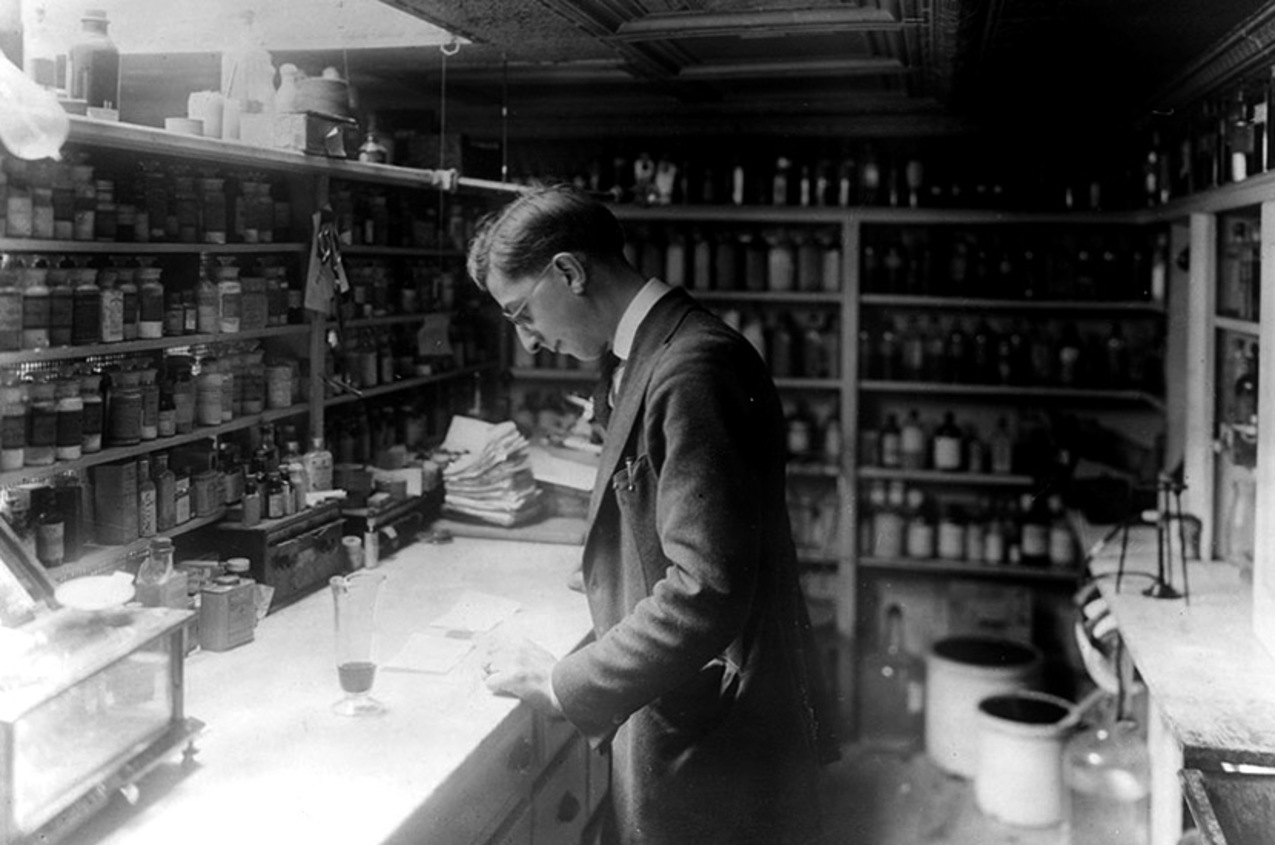 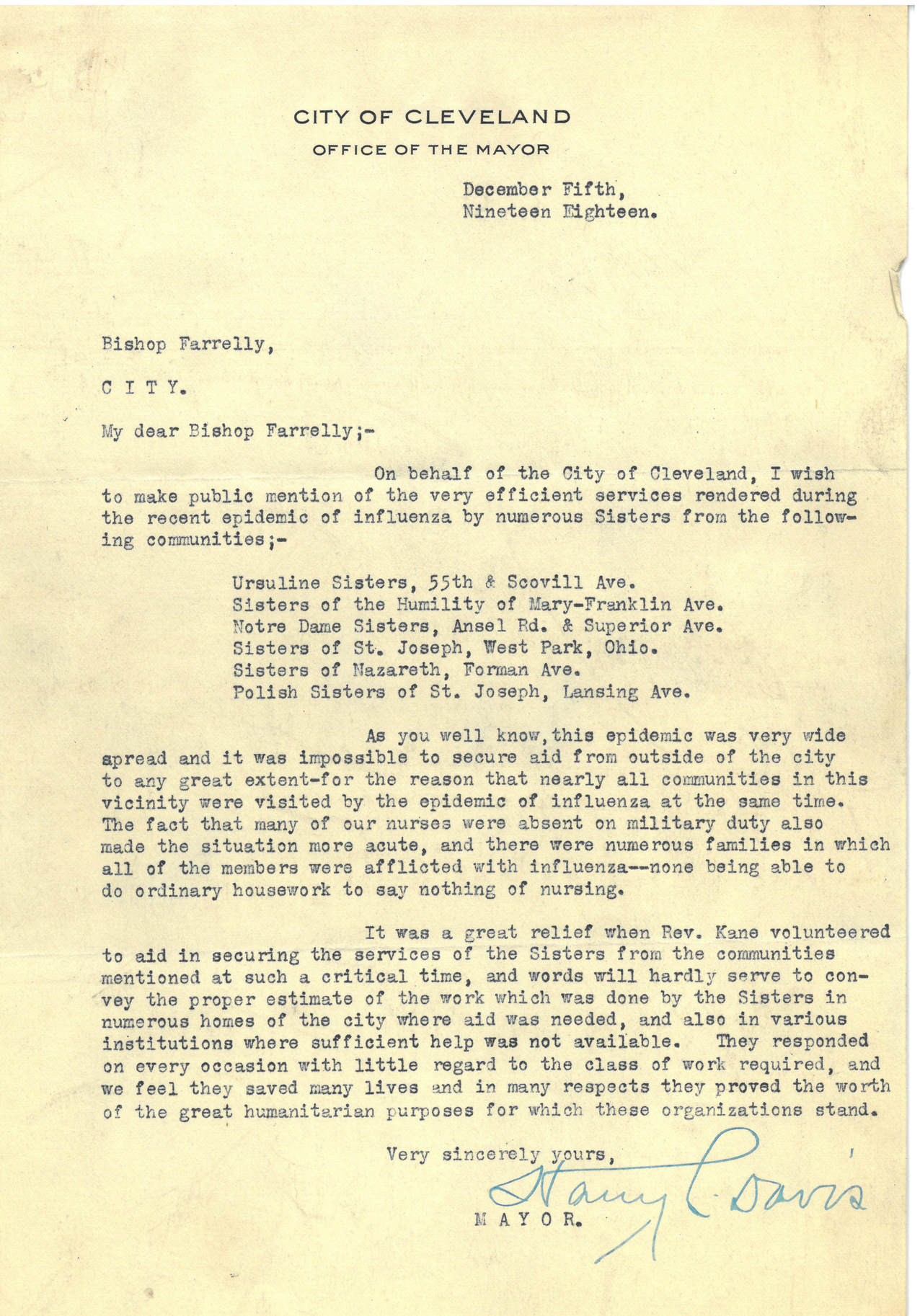 As the novel coronavirus wreaks havoc locally and across the globe, it brings to mind another major pandemic: the flu in 1918, which generally was considered to be the most severe pandemic in recent history.

The Catholic Diocese of Cleveland played a key role in helping to support those impacted by the flu epidemic.

Although some of the restrictions being imposed during the current coronavirus pandemic – including the closing of churches -- are being called unprecedented, many of the same prohibitions were invoked in 1918. Large gatherings were banned during the flu pandemic; churches and schools were closed; non-essential businesses were shuttered and public funerals were halted. These same restrictions have been phased in during the past two weeks.

The 1918 flu outbreak, caused by an H1N1 virus, began in January 1918 and did not fully subside until late 1920. The first wave in early 1918 eased after several months but the virus returned in the fall with an even more deadly second wave that necessitated stringent restrictions for the common good, according to data from that time. Reports of deaths attributed to the pandemic worldwide vary widely -- from as few as 17 million to as many as nearly 100 million.

Exacerbating the pandemic was World War I, which brought troop movements across Europe. The United States entered the war in 1917, shortly before the flu began spreading. Overcrowding in troop quarters, stress from combat and chemical attacks as well as poor nutrition also contributed to the high illness and mortality rates.

Some reports show that an estimated 500 million people worldwide were infected with the flu, or about 25% of the world’s population at the time. Much like the current coronavirus pandemic, people in 1918 were required to sacrifice some of their freedom for the sake of public health and safety.

When the disease reached epidemic status in Cleveland, which was a large, densely populated city at that time, Mayor Harry Davis and public health officials took drastic steps including banning public assemblies and gatherings in an effort to curb the spread.

Public health officials said they had hoped to slow or stop the flu if those holding public gatherings would refuse admittance to anyone showing flu symptoms. But they decided that more radical steps were needed. Once the situation was declared an epidemic, stricter rules were enforced including shutting down what were called less-essential parts of society and public gathering places. Quarantines and isolation also were enforced in an effort to quell the flu’s spread. Complicating the containment policies were war efforts.

Among the gathering places shuttered were dance halls, theaters, movies, churches, schools and other public meeting places. The closures were to last for two weeks or until conditions improved and the epidemic was arrested.

Before the churches closed, congregations were permitted to meet and pray for an abatement of the disease. The delay in closing churches also allowed pastors to educate their congregations in flu-prevention measures.

According to the Oct. 18, 1918 issue of The Catholic Universe, the diocesan weekly newspaper, Cleveland Bishop John Farrelly sent a letter to all priests asking them “to abide by every ruling of their respective boards of health and aid in every way to check the spread of Spanish influenza.” As a result, “churches and schools are closed until further notice,” the paper reported. Information about how to help curtail the disease was read in churches and published in local newspapers, including the Universe, which had a wide circulation among Catholics in the Diocese of Cleveland..

One of the more distressing things to both the faithful and clergy was the ban on public funerals. Bishop Farrelly told priests that the dead could be blessed privately and funeral Masses could be celebrated when the ban on public gatherings was lifted.

Without television and social media, newspapers like the Universe were instrumental in helping to spread the message. Priests helped provide spiritual guidance throughout the crisis by posting special prayers and sharing historical articles in the papers showing that quarantines, isolation and other public health measures were part of Catholic tradition. They also arranged for some outdoor Masses until the epidemic became so prominent that even those gatherings were banned. In fact, like today, people were asked to worship in their homes during the height of the epidemic.

With the advent of television, radio and the internet, it’s easier today for the faithful to remain connected with each other and the clergy locally and globally. Various platforms are being used to livestream or rebroadcast Masses, the rosary, stations of the cross and other prayers to provide spiritual aid during the pandemic.

In 1918, to help preserve unity, many pastors asked for services to take place at the same time in homes and shared information in newspapers about which hymns to sing and the Bible readings. Some specific prayers also were offered for relief from the flu.

The ban on public gatherings, including church services, was lifted on Nov. 13, 1918. “We may now return to God full of confidence in his love and thanksgiving for his mercy,” Universe reported in its Nov. 8, 1918 issue.

Cemeteries, including Catholic cemeteries like Calvary Cemetery on Cleveland’s Southeast Side, were inundated with bodies during the 1918 pandemic. Catholic Cemeteries Association records show that Calvary was faced with burying anywhere from 36 to more than 80 people in a day. Grave diggers were overwhelmed and city utility workers were pressed into duty to assist. Father Martin O’Malley, who was in charge of the cemetery, finally had to use a steam shovel to dig mass graves for the flu victims. Family members of the dead and others also volunteered to help at the cemetery.

Social and medical services were stretched to the limit during the pandemic so many Catholic sisters rolled up their sleeves to provide valuable assistance.

And when the worst of it was over in December 1918, Mayor Davis penned a letter to Bishop Farrelly thanking him and the local Church for their assistance and support. He specifically called attention to the efforts of the following orders of religious sisters: the Ursulines, Sisters of the Humility of Mary, Notre Dame Sisters, Sisters of Nazareth and Polish Sisters of St. Joseph, all in the city of Cleveland, and the Sisters of St. Joseph in West Park (which at that time was a separate city before its annexation to Cleveland).

“As you well know, this epidemic was very widespread and it was impossible to secure aid from outside of the city to any great extent – for the reason that nearly all communities in this vicinity were visited by the epidemic of influenza at the same time. The fact that many of our nurses were absent on military duty also made the situation more acute,” the mayor wrote.

He said it was “a great relief” when the services of the sisters were volunteered “and words will hardly serve to convey the proper estimate of the work which was done by the Sisters in numerous homes of the city where aid was needed, and also in various institutions where sufficient help was not available. They responded on every occasion with little regard to the class of work required, and we feel they saved many lives and in many respects they proved the work of the great humanitarian purposes for which these organizations stand.”

The original letter and copies of the Universe newspaper are preserved in the diocesan archives.