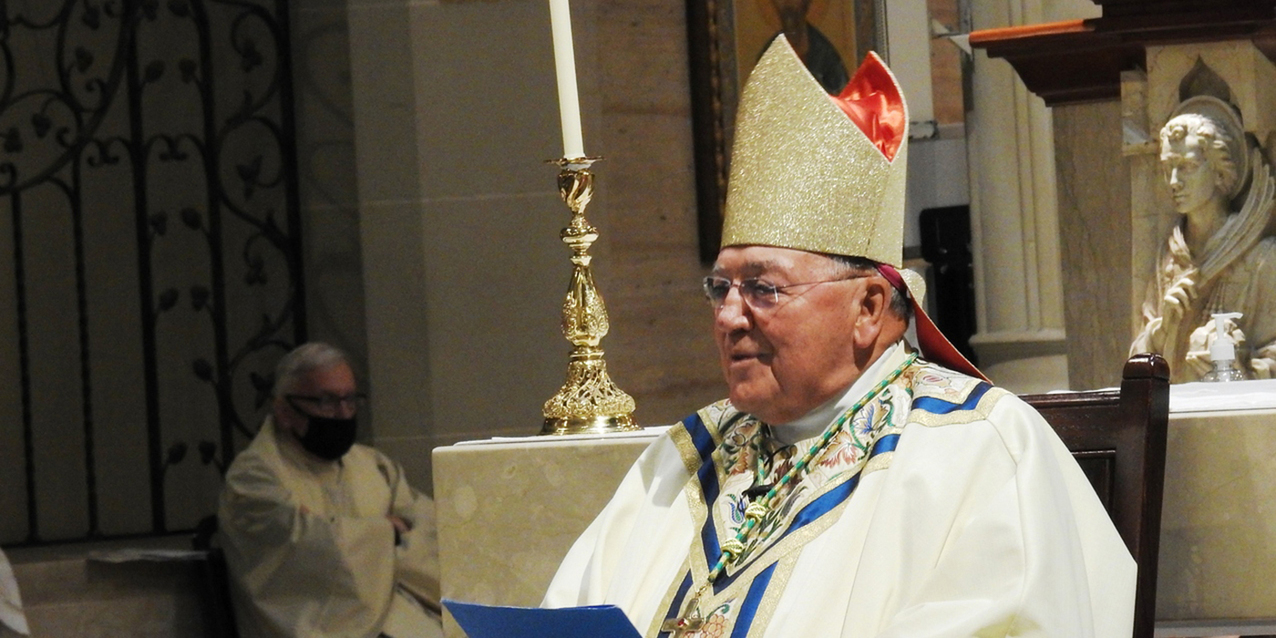 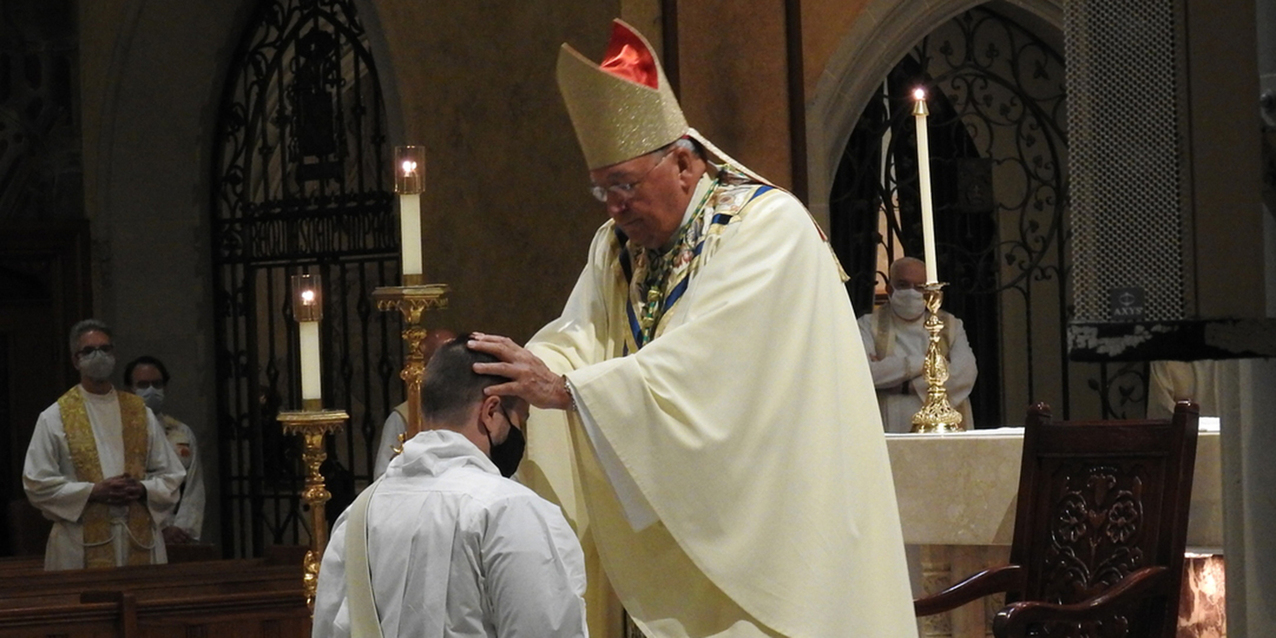 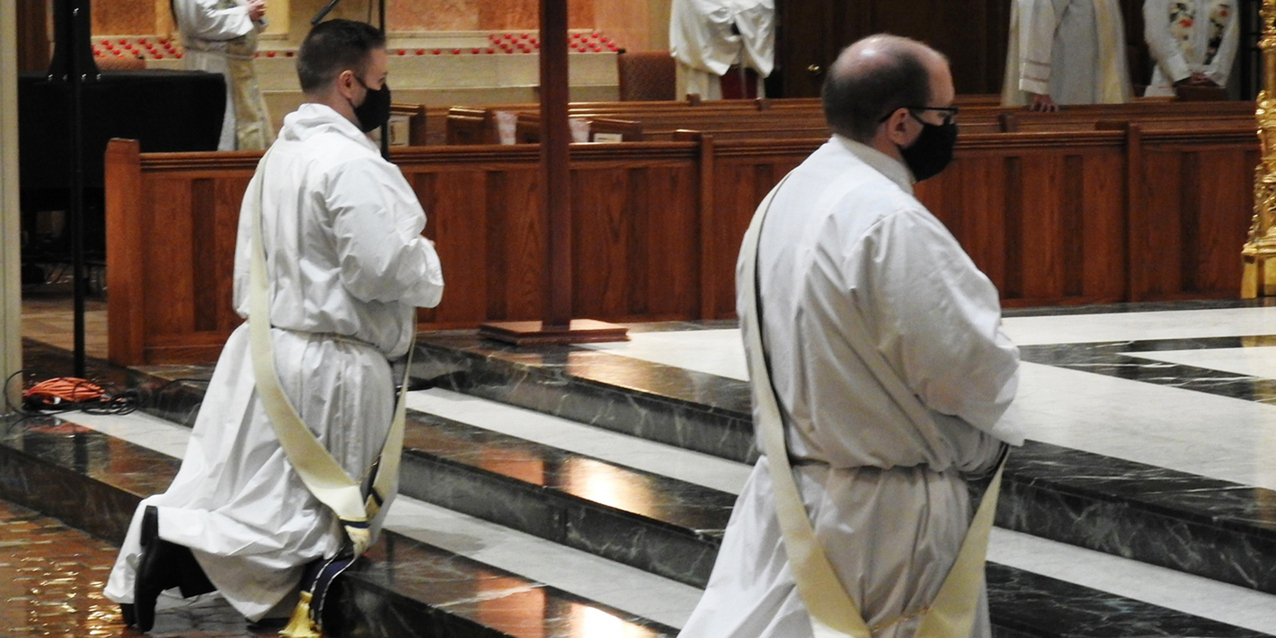 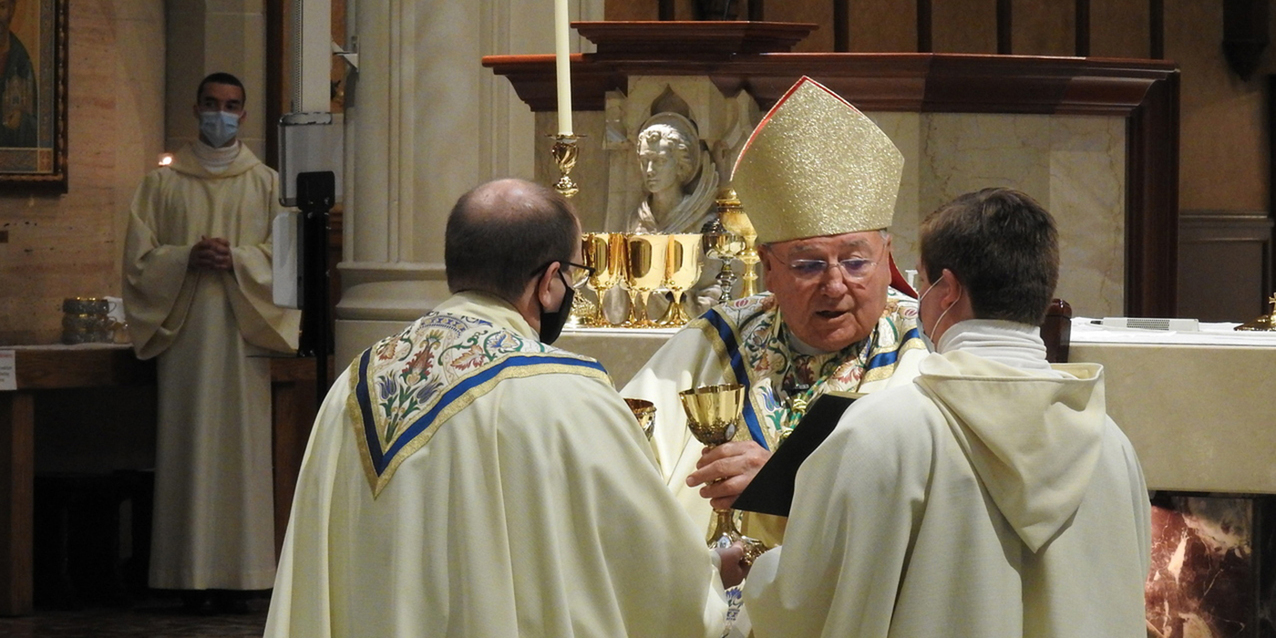 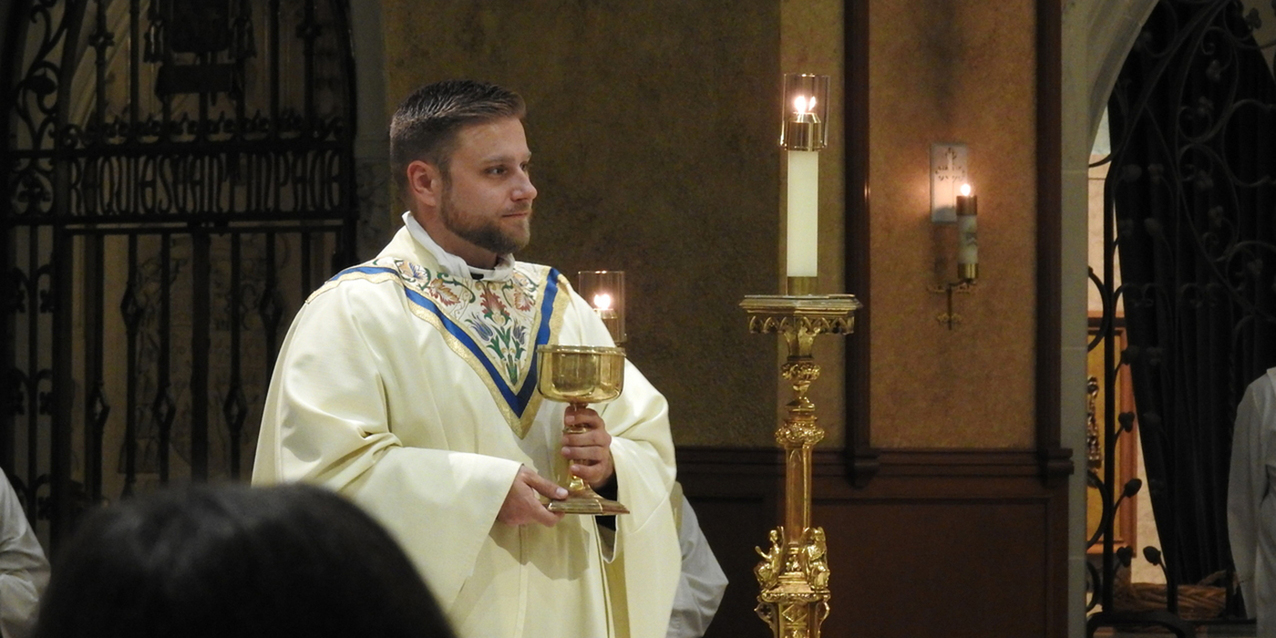 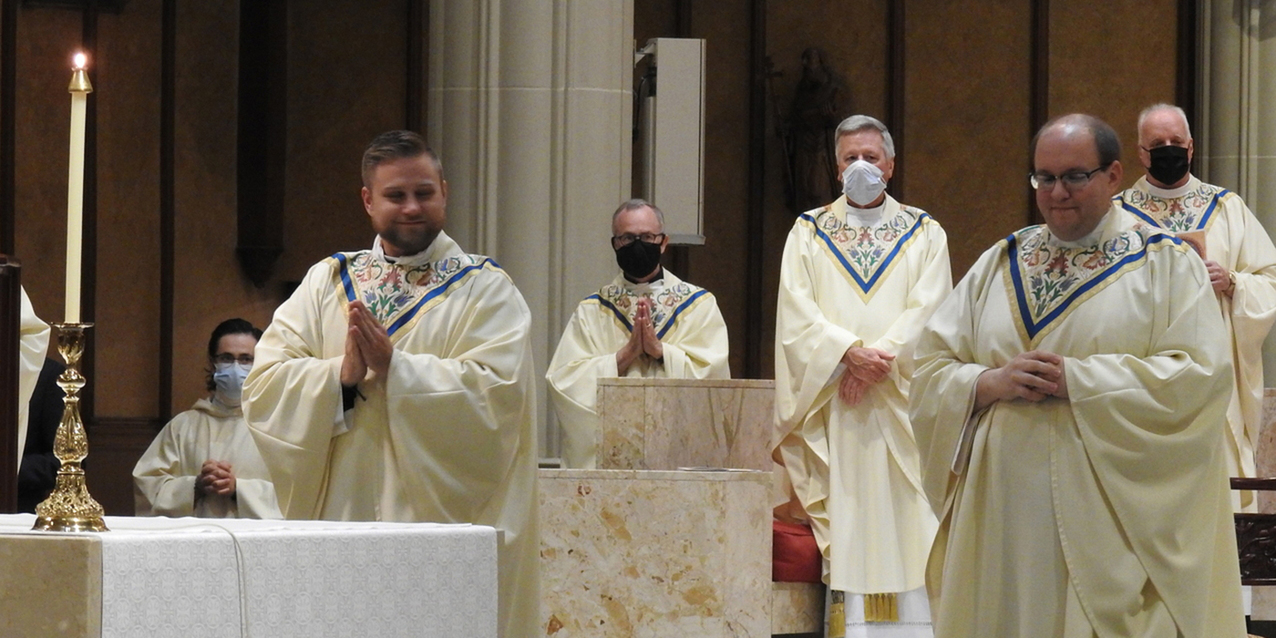 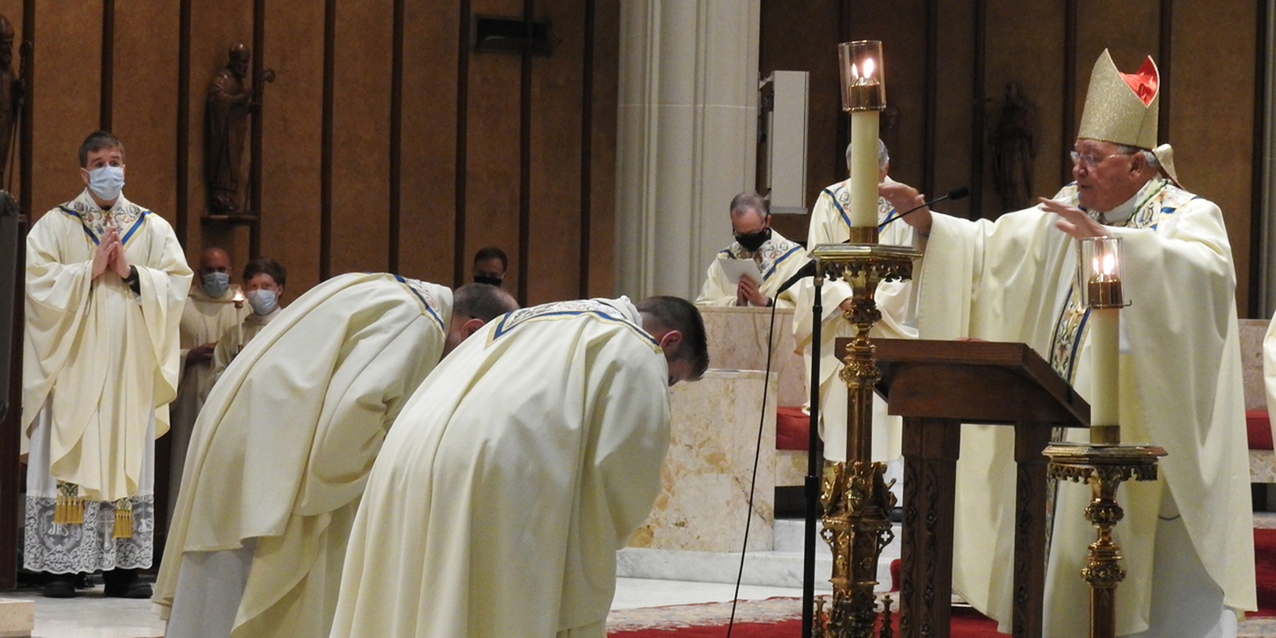 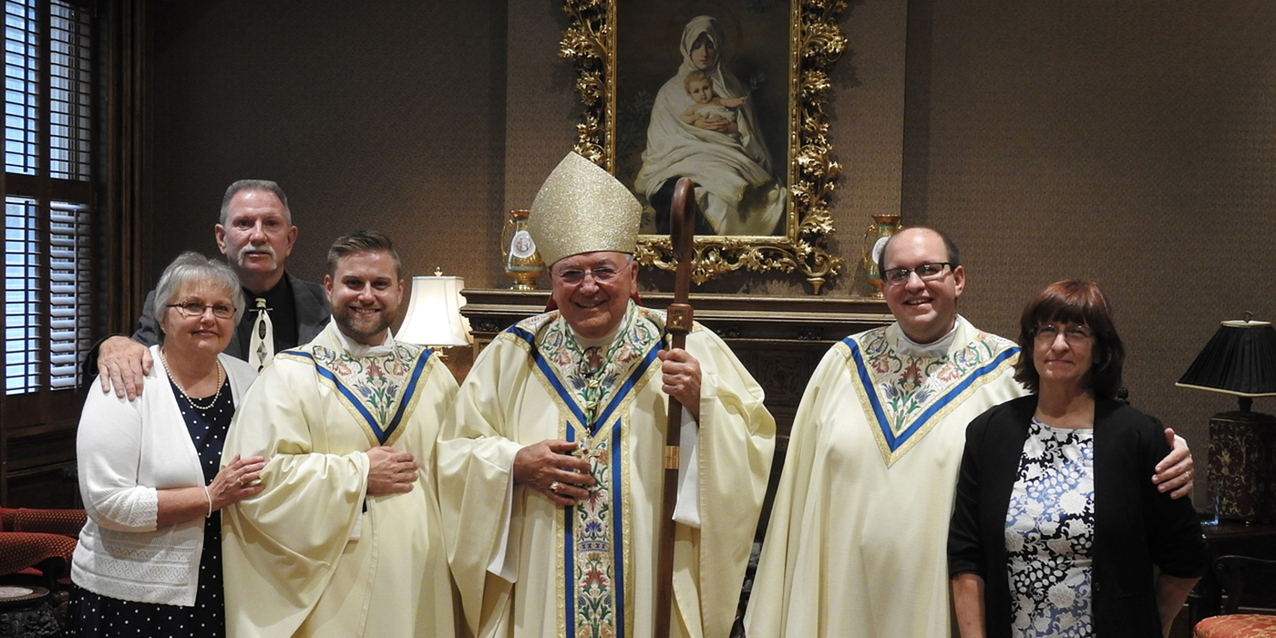 “You are a priest forever, in the line of Melchizedek.”

Those words -- from Psalm 110 in the Old Testament -- became a reality on Aug. 1 as two transitional deacons, Joshua Cochrac and Joseph Robinson, became the newest priests for service in the Catholic Diocese of Cleveland.

After nine years of study and formation, Auxiliary Bishop emeritus Roger Gries ordained them during a Mass in the Cathedral of St. John the Evangelist in downtown Cleveland. “The day is finally here,” the bishop said.

Because of the coronavirus pandemic, only invited guests could attend the Mass. However, countless others were able to watch the livestreamed liturgy on the diocesan website. In addition, the Mass was broadcast live by AM 1260 The Rock, Cleveland’s Catholic radio station.

The ordination Mass -- originally scheduled for May 16 -- was delayed by the ongoing health crisis. Those attending the ordination liturgy followed safety protocols including wearing masks, observing social distancing and the use of hand sanitizer.

“God is good,” Bishop Gries said, as the congregation responded, “All the time.”

Bishop Gries recognized Father Don Oleksiak for the hard work he has undertaken as diocesan administrator during the past several months. “He has one more month to go,” the bishop quipped. Bishop Edward Malesic will be installed as the 12th bishop of Cleveland on Sept. 14. He also thanked Father Sean Ralph, cathedral administrator, for opening the mother church of the diocese for the ordination Mass.

Father Mark Latcovich, president-rector of Borromeo Seminary and Saint Mary Seminary and Graduate School of Theology, also received thanks for his work in ensuring that the new priests and all seminarians are well-prepared for the priesthood. And Father Mike McCandless, who heads the diocesan Vocations Office, was acknowledged for the work his office does to foster vocations.

After a nearly three-month delay because of the pandemic, Bishop Gries said it was a day to rejoice. “There is no better time to be a bishop or a priest than in today’s Church,” he said.

Baptism is the foundation of Christian life, the bishop said. And he called each vocation a mystery.

“We can always be sure God is calling enough men to be priests,” he said, but they may not always hear the call right away. “But thank God that Josh and Joe answered the call.”

Fifty-seven years ago, Bishop Gries said he was ordained to the priesthood, with Bishop Clarence Elwell laying his hands on him. That was repeated in 2001, when Bishop Anthony Pilla laid hands on Bishop Gries during his episcopal ordination.

“It is truly an honor for me to share what I received,” he said.

He reminded the new priests of the obligations that come with their role, including daily prayer, Mass and helping to build up God’s Church. “Make every effort to die to sin,” he said. “Remember, you were chosen from among God’s people. Seek to bring the faithful together to God the Father.”

The bishop also noted that Jesus, the Good Shepherd, did not come to be served, but rather to serve others.

“Remember, you are joined to a great fraternity – the presbyterate. Be present to them. They want to see you and support you. We have a beautiful presbyterate. Cherish it,” he added.

“The whole Church of Cleveland will rejoice with you today. God bless you,” he told he newly ordained priests.

The rite of ordination included election of the candidates, consent of the people, promise of the elect, litany of supplication during which the new priests lay on the ground by the altar, laying on of hands, prayer of ordination, investiture with stole and chasuble, anointing of hands, handing over of bread and wine and the fraternal kiss.

After their ordination, the Mass continued with the new priests as concelebrants. They offered the congregation a blessing at the end of Mass.

The newly ordained took a few minutes to pose for pictures with their families and the bishop after Mass.

Each will celebrate his first Mass this weekend and they will begin their new ministry as parochial vicars on Aug. 4.

Father Cochrac is the son of Gwen and the late Raymond Cochrac of St. Mary of the Falls Parish in Olmsted Falls. He will serve at St. Charles Borromeo Parish in Parma.

Father Robinson, the son of Timothy and Faith Robinson of Mary Queen of the Apostles Parish in Brook Park, will serve at St. Peter Parish in North Ridgeville.