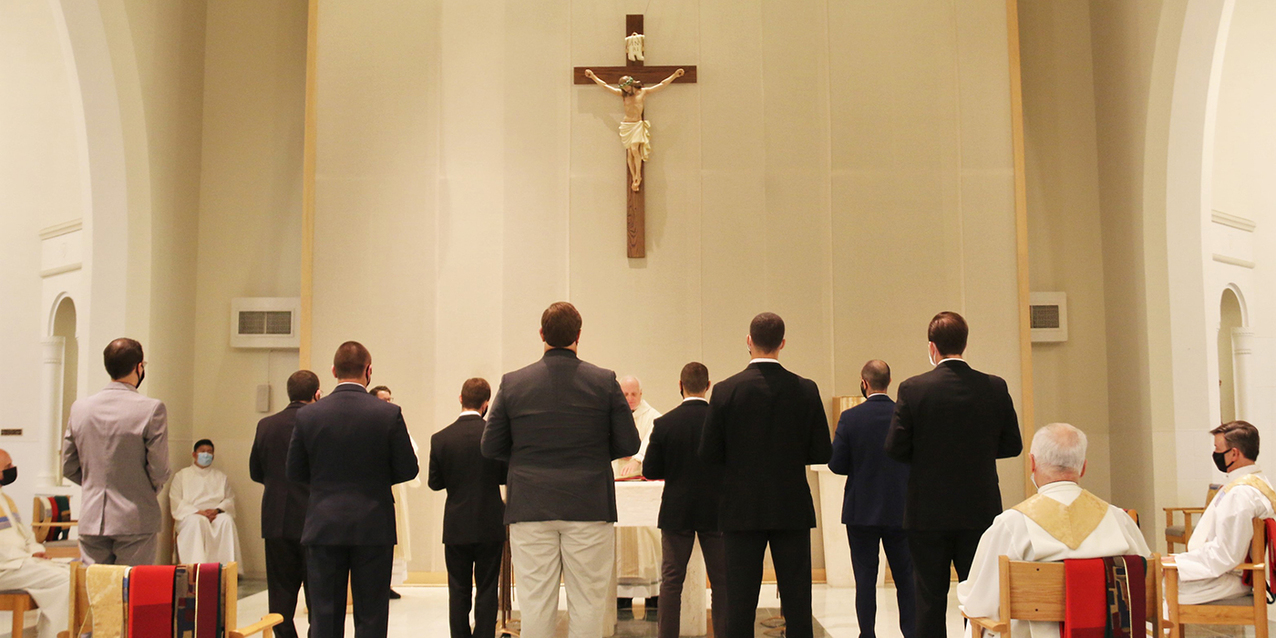 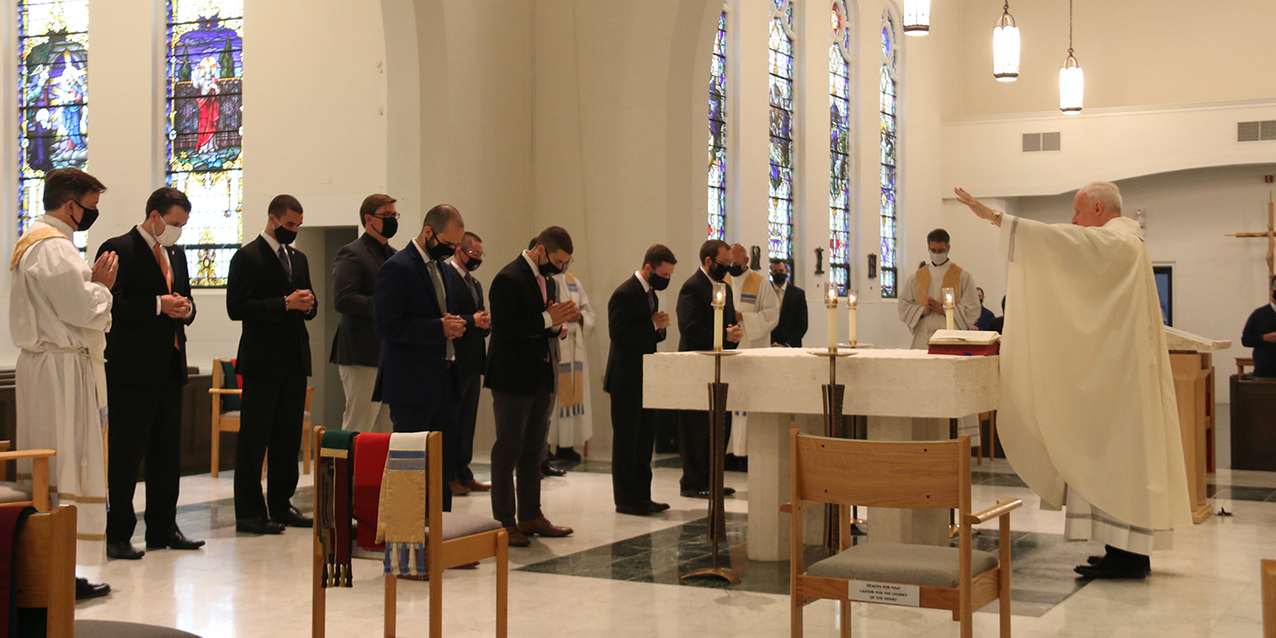 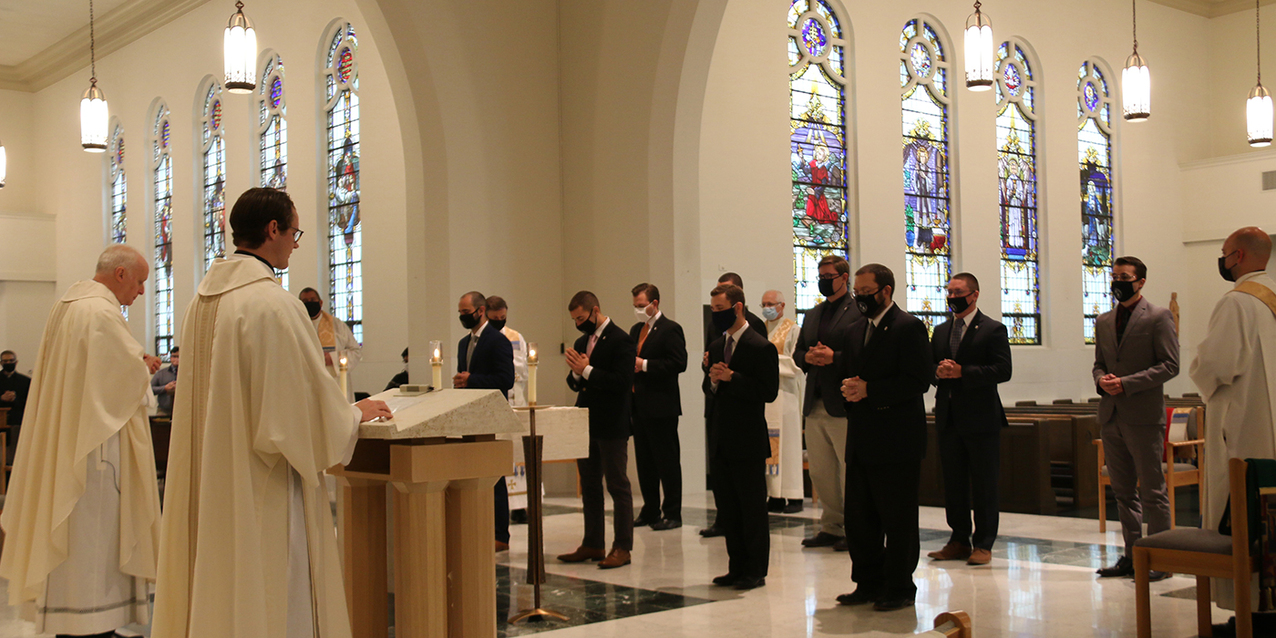 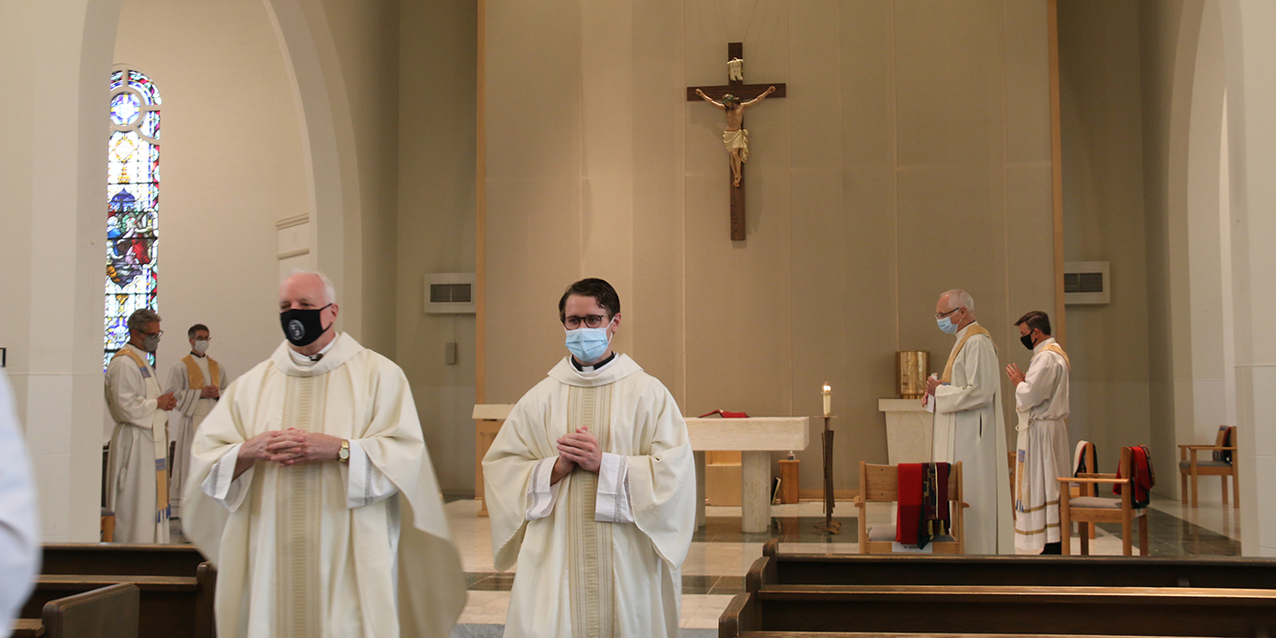 Nine students at Saint Mary Seminary were admitted to candidacy for ordination as deacons and priests during a Mass on Sept. 11 at the Center for Pastoral Leadership in Wickliffe, where the seminary is housed.

Father Mark Latcovich, president-rector of Borromeo and Saint Mary seminaries, accepted the men as candidates for the sacrament of holy orders as they continue their discernment and formation for the diaconate and priesthood for service to the Diocese of Cleveland and the Diocese of Youngstown. The Mass, celebrated by Father Latcovich, was attended by Saint Mary seminarians and faculty.

The men are in their first year of theological study and priestly formation. During the liturgy they publicly announced their desire to bind themselves to the service of God and his holy people and to complete their human, spiritual, intellectual and pastoral preparation for ministry.

Father Latcovich asked them to “put out into deeper water” by reflecting on this quote from Pope emeritus Benedict: “The Lord requires you to have your life completely at his disposal; and at the same time, the Lord entrusts himself entirely to you.”

He told the candidates that they are being called by the Church to embrace the configuration stage of formation and to embrace ministry now, which means giving themselves to others. Ministry is not just performing tasks, but real communion with others, he said.

“Jobs or tasks require special calculation and hard work that have an end date,” Father Latcovich said. “Ministry requires closeness, familiarity with others to serve. It means to draw near, to offer yourself. It requires obedience because we let ourselves be guided where we do not want to be led.” He said Peter didn’t really want to drop his net so close to the shore, but he listened to what Jesus said.

“Real service allows us to share our freedom with others to enter into communion with them,” he added.

“You are now members of a formation community and called to draw closer to brothers here at the seminary. You must help them discern their gifts as they help you discern yours.

“You will later be called as candidates for the ministries of lector and acolyte to proclaim the Word of Christ,” Father Latcovich told the men. He said they would not be following their own words, but rather they will be one who “lives under the Word (Christ) and serves the Word. You will receive daily nourishment from Christ’s body and blood.”

He said they will learn that Christ abides with them so they can move out of themselves and into community where they will be ready for the Lord to use them, to send them.

“Like Peter, you will feel like you want to fall to your knees and say, ‘Depart from me – I am a sinful man.’ You will feel humbled, but then the Lord will say to you, “Do not be afraid,” he said.

Father Latcovich told the men that he has journeyed with them over the past four years and “the faculty and I stand with you today ready to accompany you in this stage of formation.” He said like Jeremiah in the first reading, they should “Have no fear because I (the Lord) am with you.”