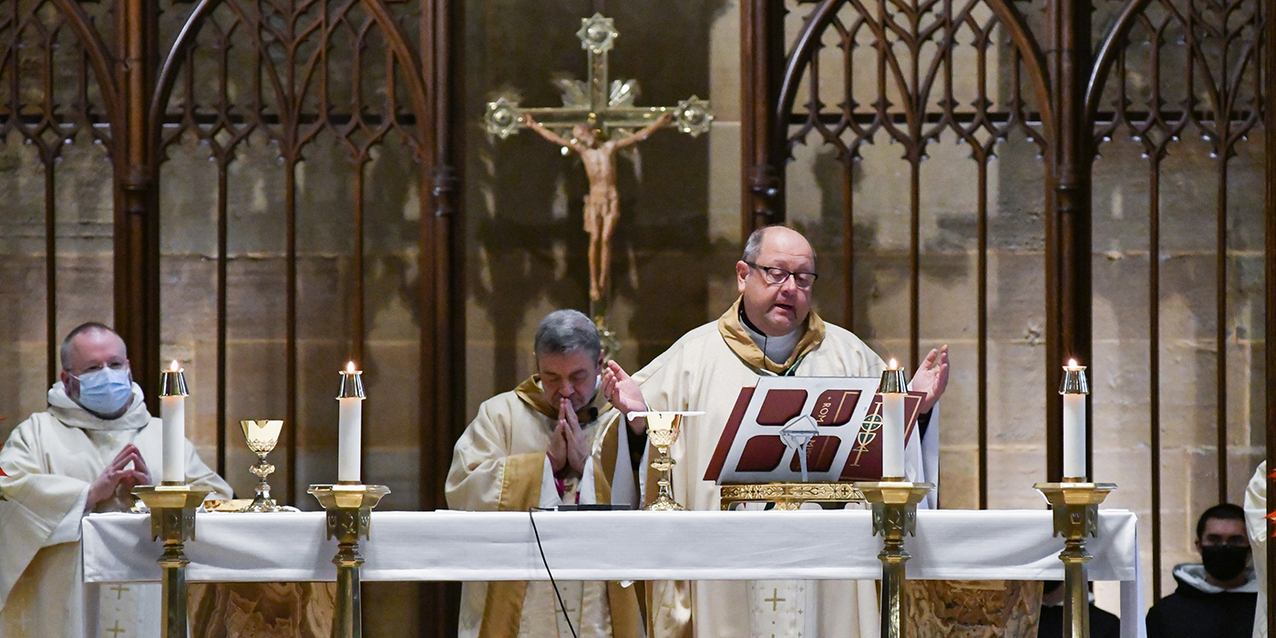 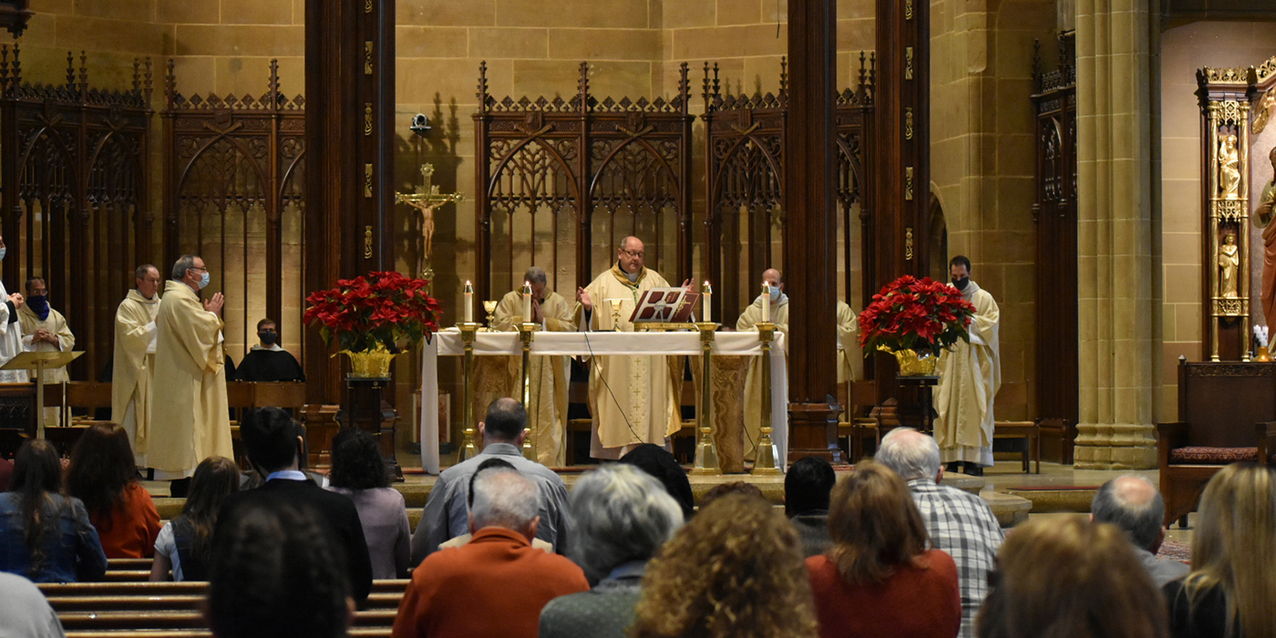 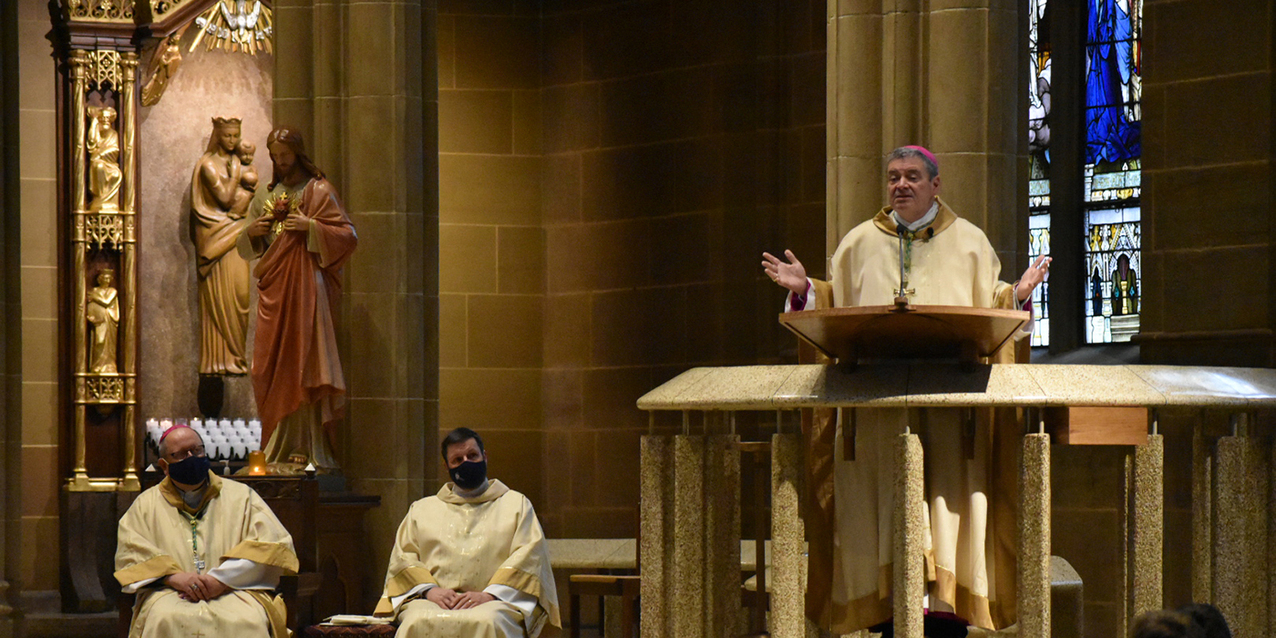 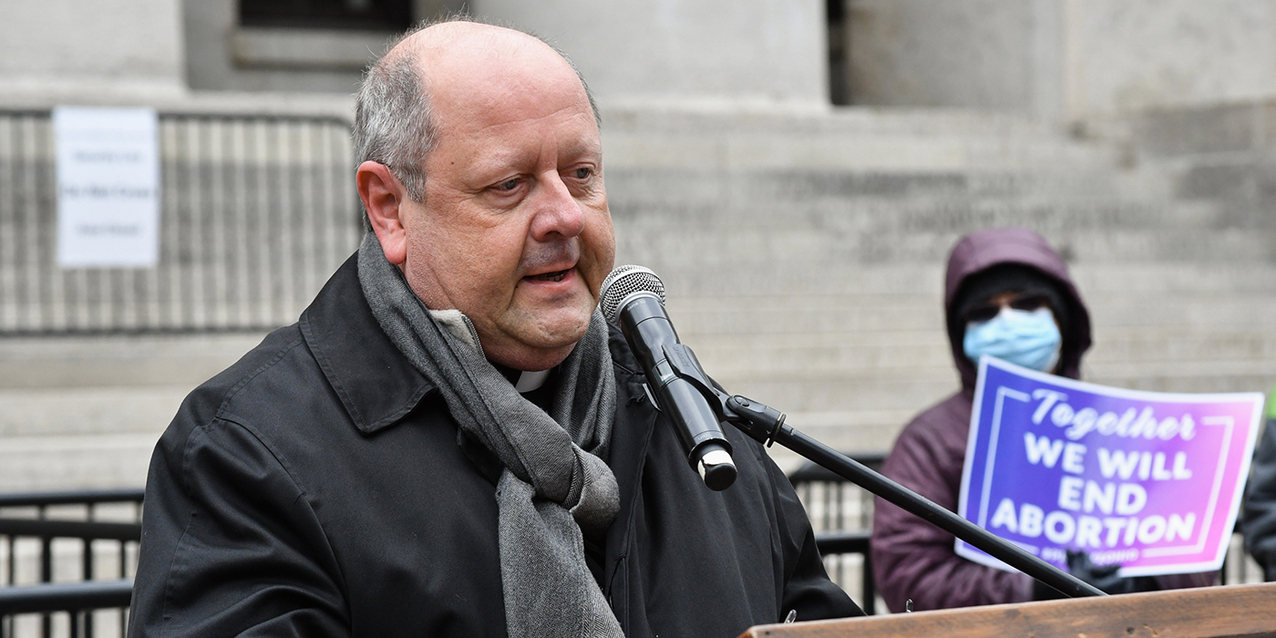 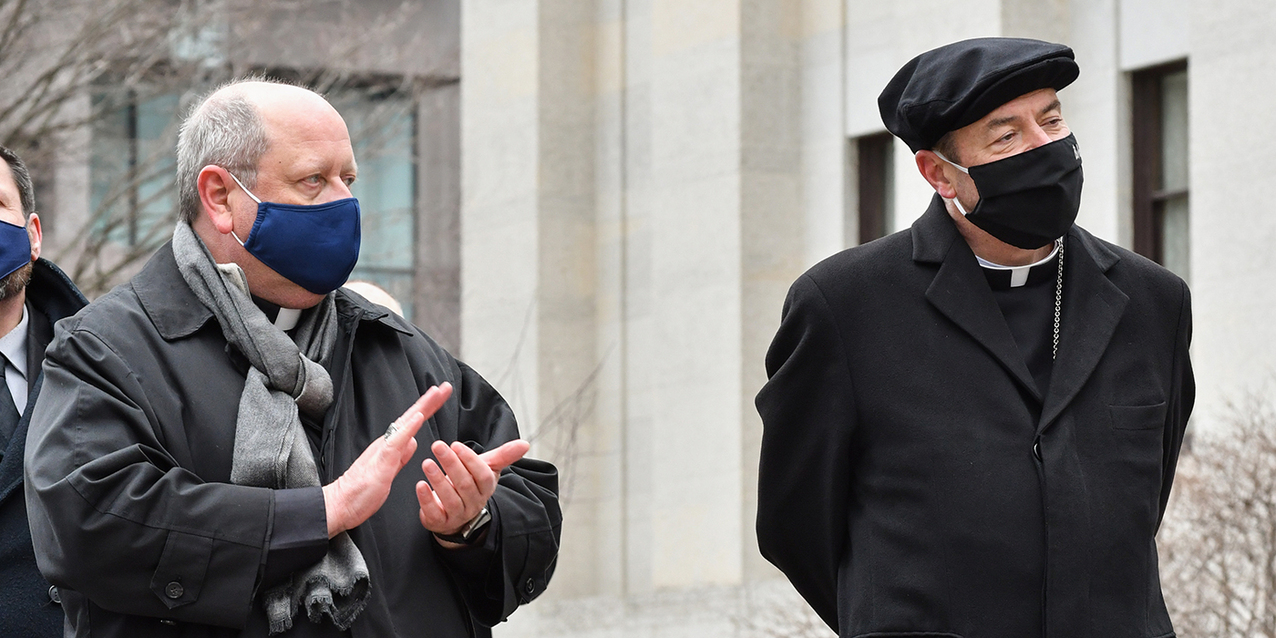 Bishop Malesic joined Bishop Robert Brennan of the Catholic Diocese of Columbus to celebrate the annual Respect Life Mass at St. Joseph Cathedral in Columbus before traveling to the statehouse for the rally, which marked the 48th anniversary of the United States Supreme Court’s Roe v. Wade decision that established a woman’s right to obtain an abortion throughout her pregnancy is protected by privacy rights guaranteed by the 14th Amendment of the Constitution. About 200 people attended the 10:30 a.m. Mass, which was disrupted briefly by a small group of protestors.

“It was sad that children had to witness that display of violence,” Bishop Malesic said, noting some of the children appeared visibly upset by the protestors, who also attempted to disrupt the Roe Remembrance rally.

The pro-life movement will prevail against pro-abortion forces through the strength of its arguments and the actions of its supporters, the bishop said at the rally.

“The fundamental right to be alive is what allows us to love everyone. There is hatred on this side of the fence. We won’t win this argument (against those supporting abortion rights) by yelling. We will win this argument by the strength of it,” he said in his unscripted remarks.

Referring to the protestors, the bishop said there are two sides to the abortion issue.

“Let me tell you, if I was an outside observer, I know exactly which side I would choose. There’s beauty and there’s ugliness; there’s peace and there’s violence; there’s love and there’s hatred; there’s life and there’s death. The Lord sets before us many choices. He asks us to take sides,” Bishop Malesic said. “May we side with life. May we side with beauty and peace and love and non-violence, including verbal non-violence. May we listen to each other and accompany each other so that in the end we will find ourselves where the Lord came to bring us: to a kingdom of peace and justice.”

Before entering the seminary at the Pontifical College Josephinum in Columbus, the bishop – a native of Harrisburg, Pennsylvania -- studied biology for three years at Lebanon Valley College near Hershey, Pennsylvania. It was there that he said he learned about the beginning of life, “a fundamental fact I learned in Biology 101. It’s science,” he said, referring to life beginning at conception.

“You are a great witness to the Lord, to love, to peace, to joy, to happiness,” Bishop Malesic said to the crowd at the rally. “You are a great inspiration to me. I am happy to be here with you.”

As he offered a closing prayer and blessing, the bishop prayed for those struggling with pregnancy, unborn children who are in danger, friends, enemies, those who love us and those who hate us.

“May we be a people of peace,” he added.

“The larger message is we should have respect for life – for all persons.”

Columbus Bishop Robert Brennan released the following statement regarding the protestors in Columbus:

“Today (Jan. 22) during our Respect Life Mass at St. Joseph Cathedral, a group of protesters entered this sacred space in an attempt to disrupt our worship. I am deeply thankful to the Columbus police, assisted by diocesan staff, for the quick response without injury to anyone present. I want to express my great admiration and thanks to all those attending the Mass whose respectful and prayerful response reflects the joy, hope and mercy that marks our pro-life witness. I also apologize to the families present whose children were exposed to this. On this day, in remembrance of the Roe v. Wade Supreme Court decision, I ask all to continue to pray for the unborn who died, for all those who have experienced the pain of abortion, and for those who cannot understand our divine and steadfast calling to champion this cause. “

(Photos courtesy of the Catholic Diocese of Columbus)