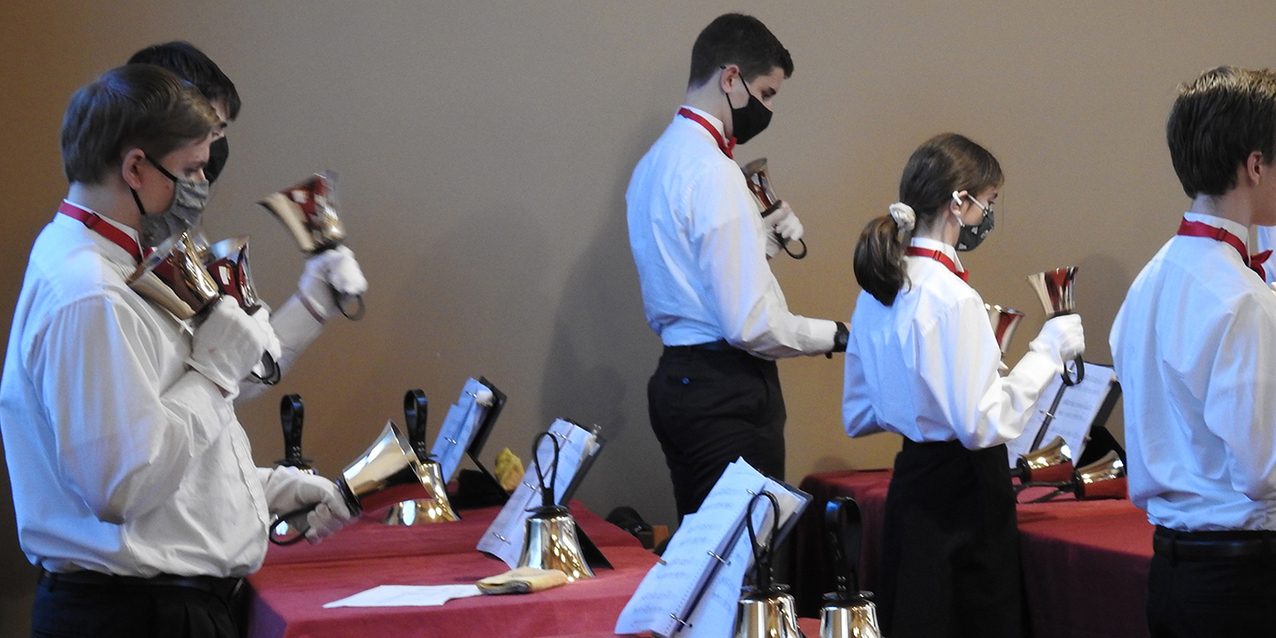 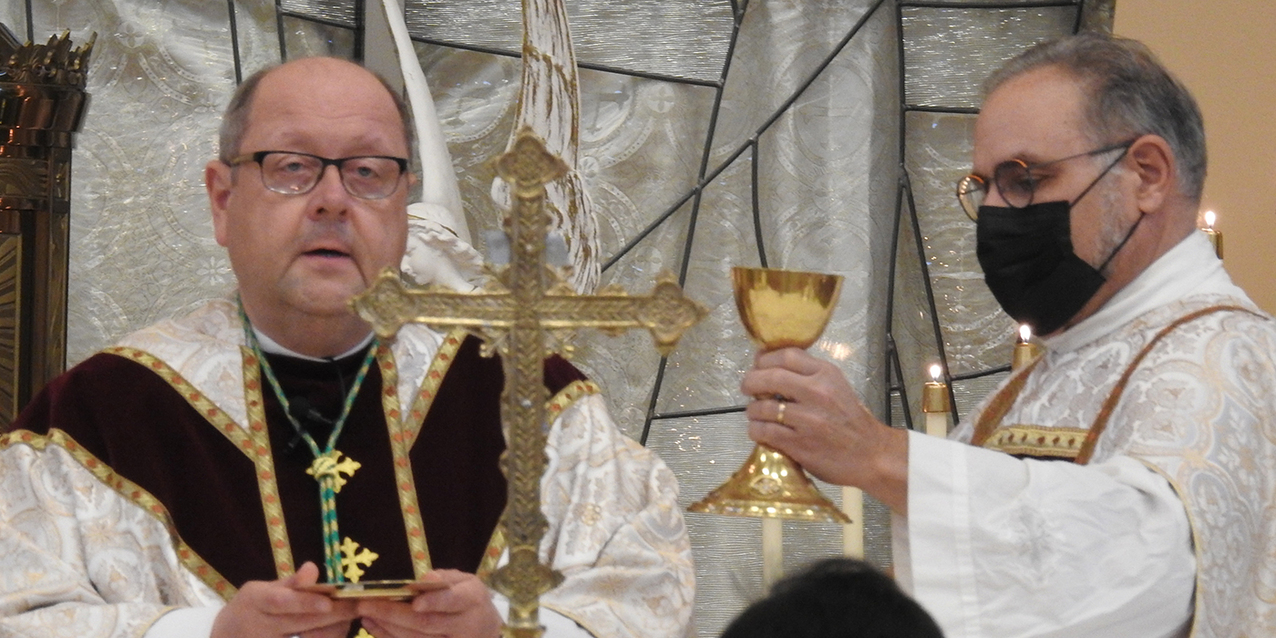 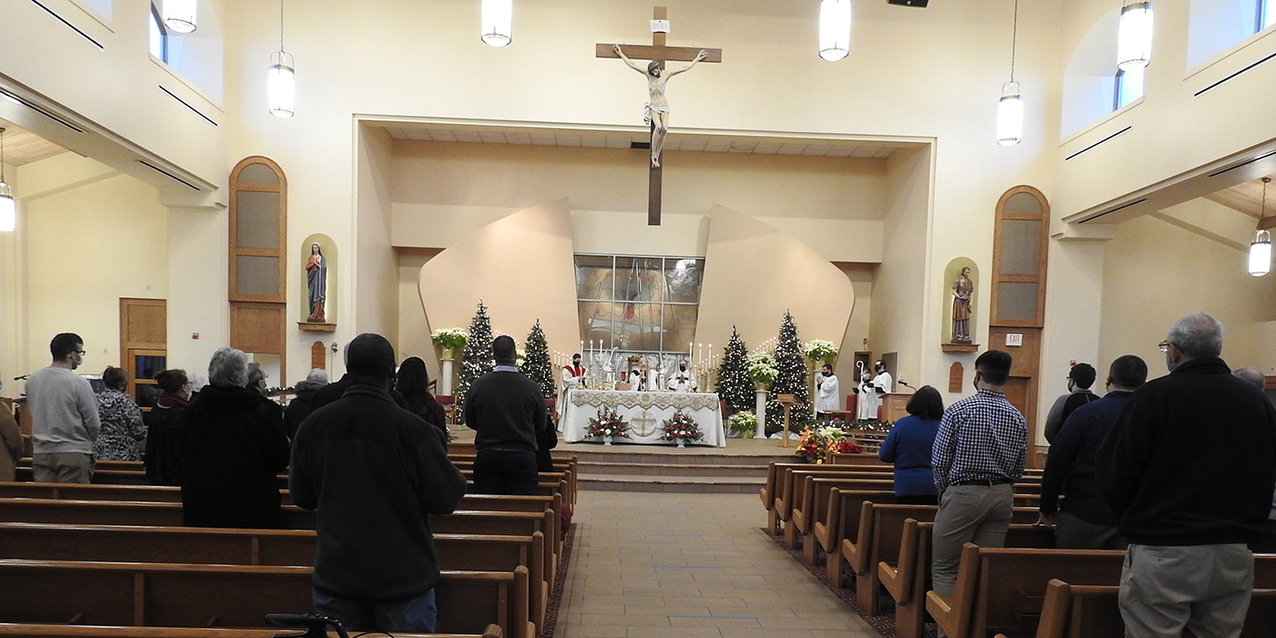 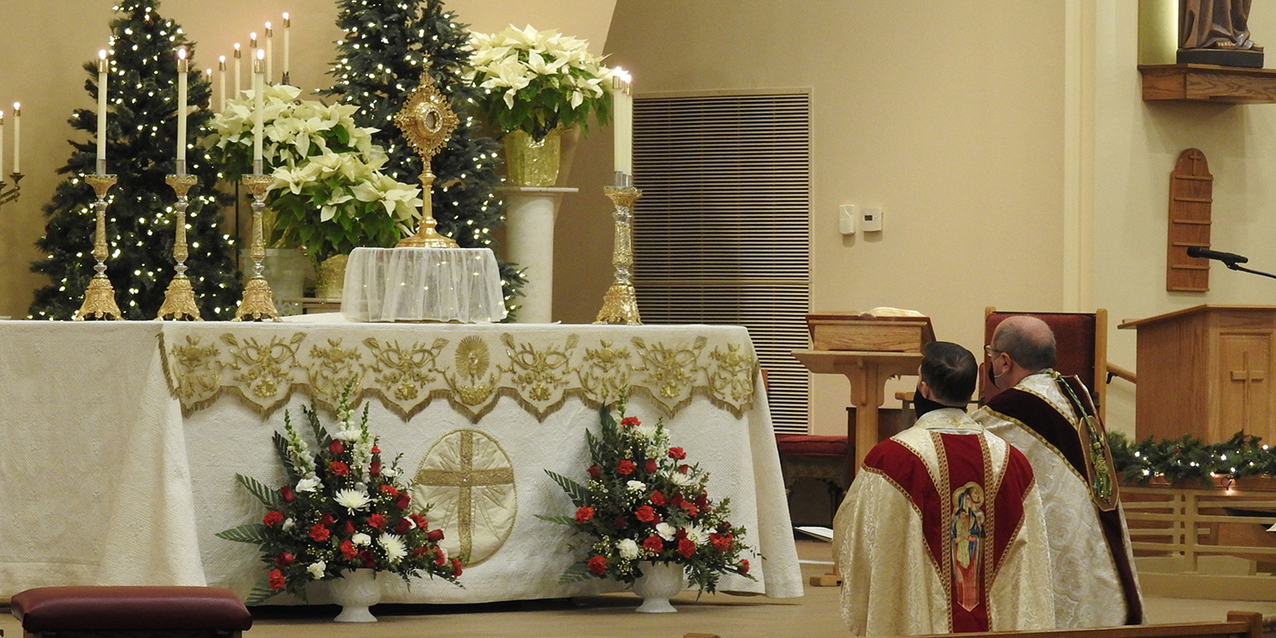 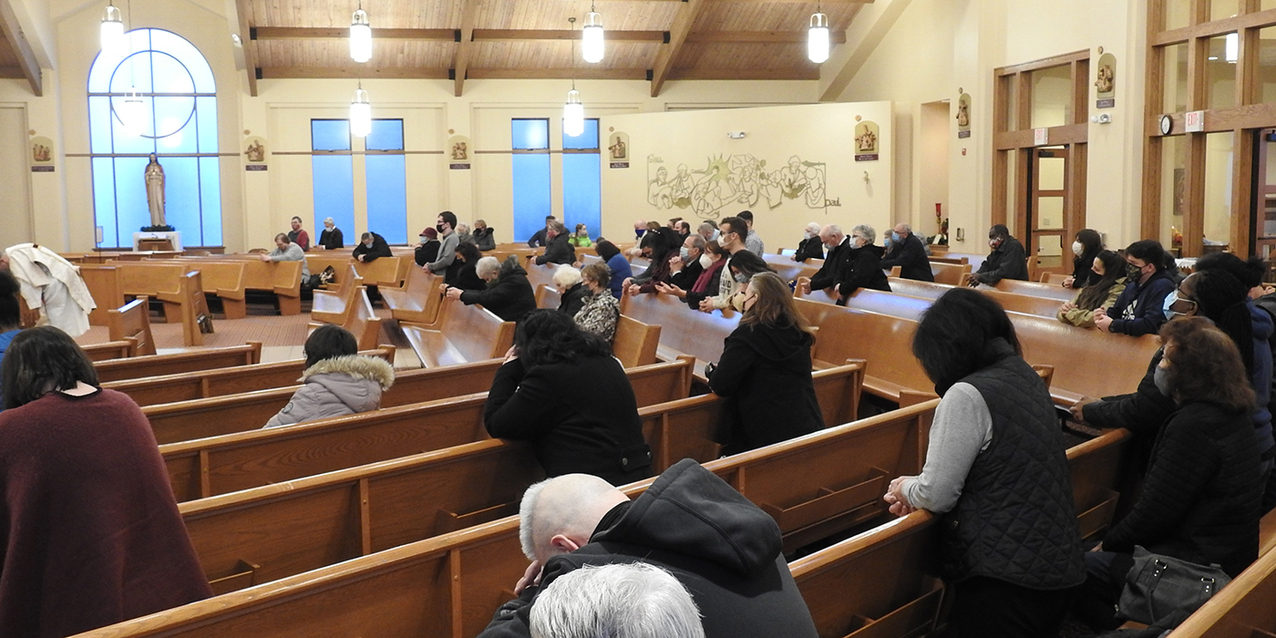 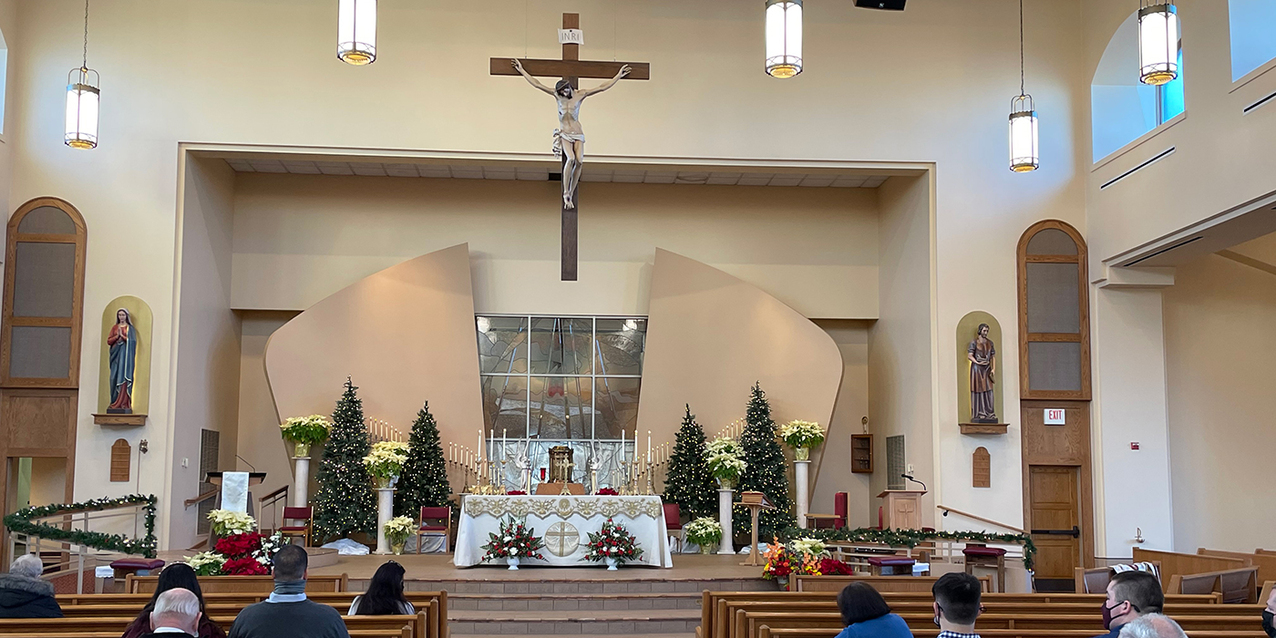 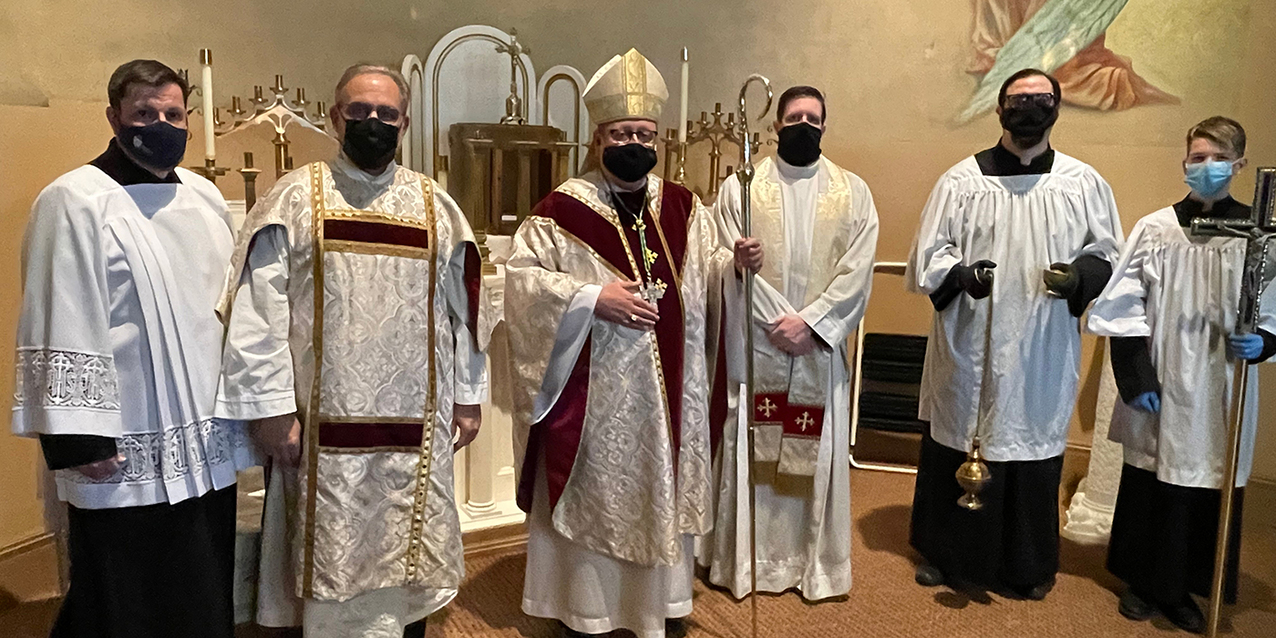 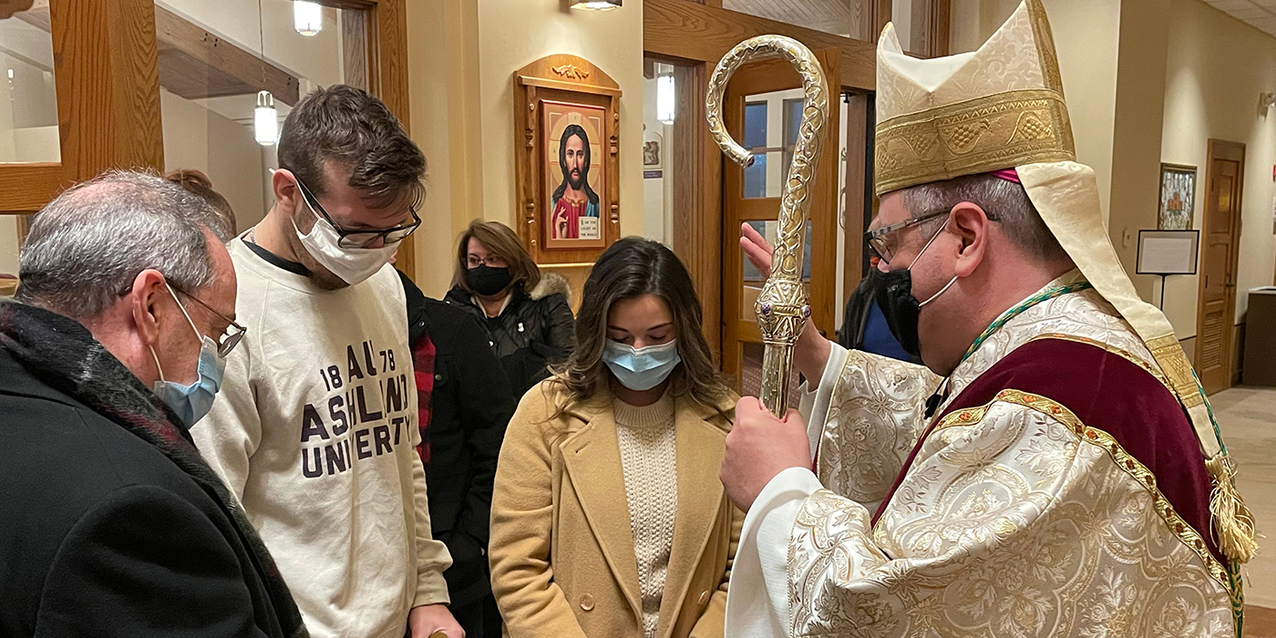 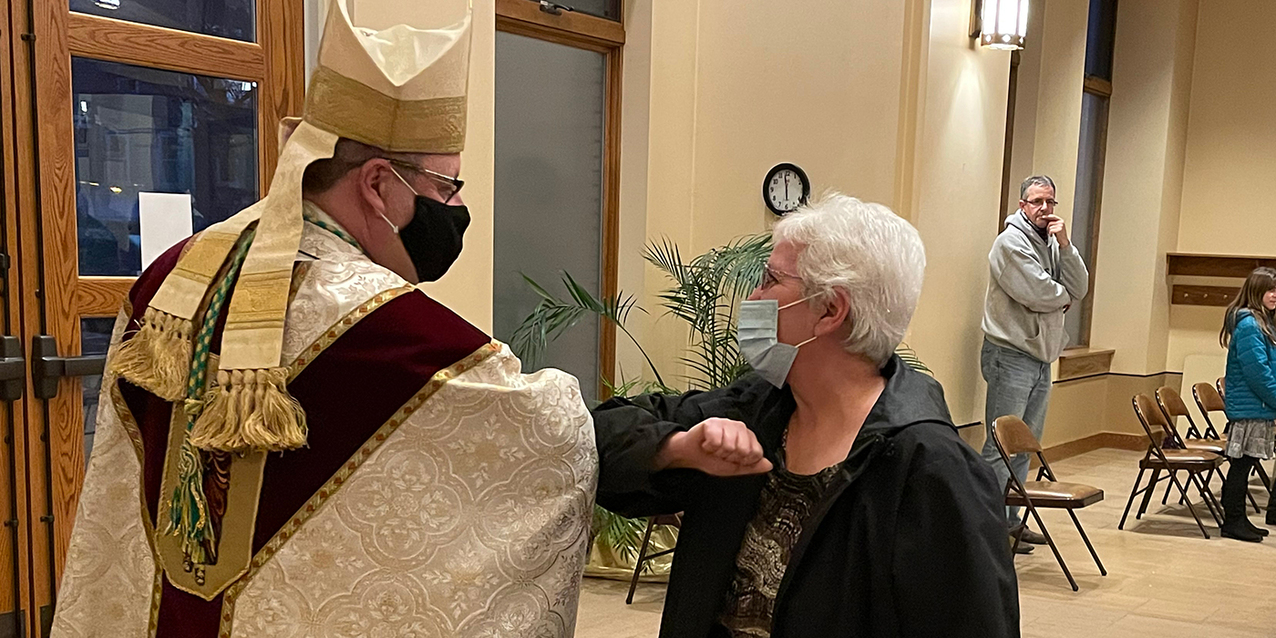 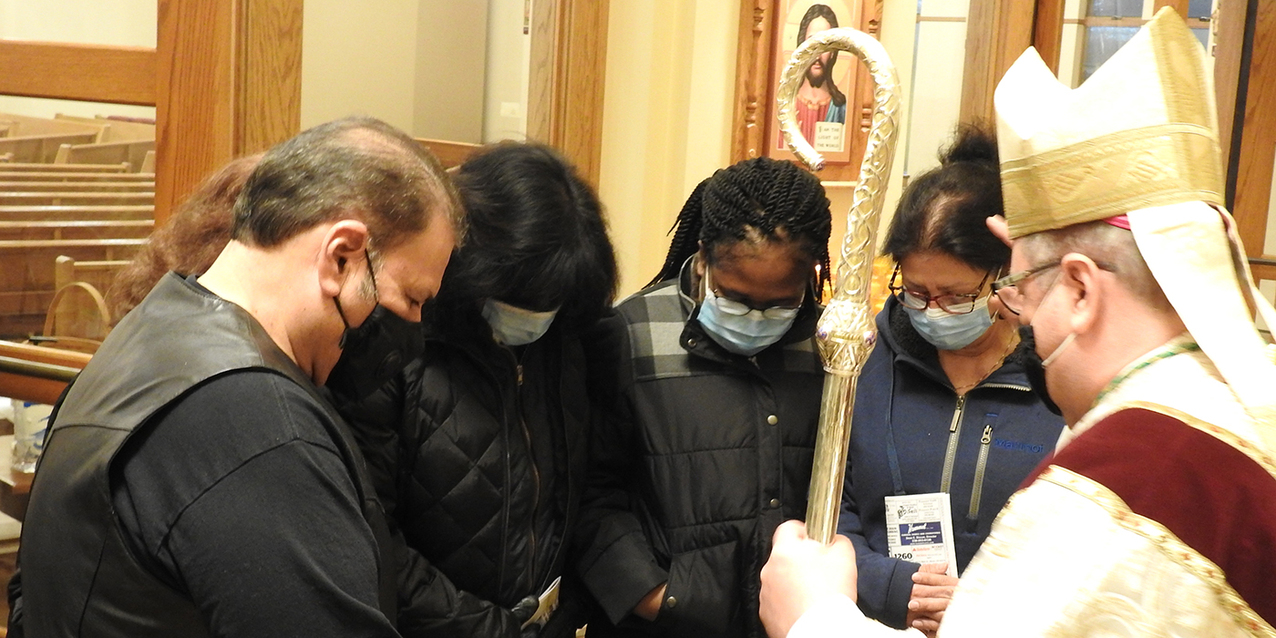 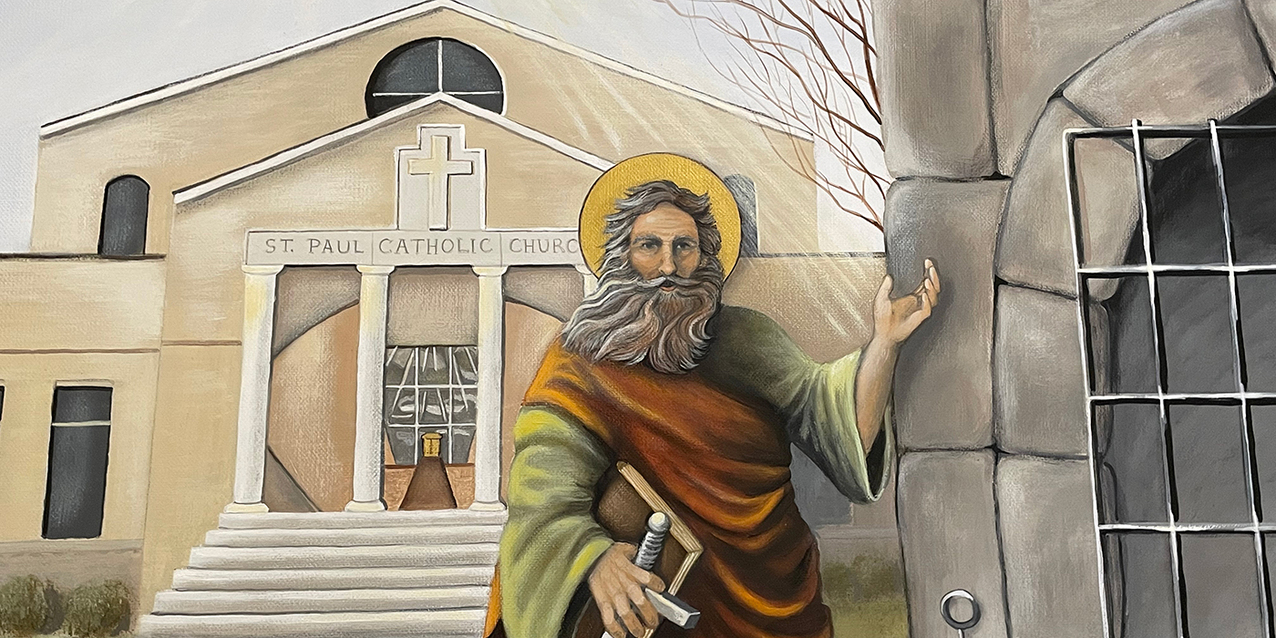 During a visit to St. Paul Parish in Akron on Jan. 23, Bishop Edward Malesic thought he recognized a voice – and he did. It turns out the cantor was someone he knew from his time serving the Diocese of Harrisburg, Pennsylvania. She came to Ohio to pursue a master’s degree, met her husband and they are parishioners at St. Paul.

“It’s a small Church,” the bishop said as he began his homily. He was celebrating Mass with Father Matt Pfeiffer, the pastor, in observance of the parish’s patronal feast day: the conversion of St. Paul. Also, Word of God Sunday was observed last weekend.

The first reading was the story of Jonah who was commanded by God to preach a message of repentance to the Ninevites. They were enemies of his people and he didn’t want to convert them; he didn’t want God to show them mercy, so Jonah ignored God, climbed on a boat and headed in the opposite direction.

A big storm came, he was thrown overboard and swallowed by a huge fish – possibly a whale. Three days later, he was expelled onto the shores of Ninevah, the last place he wanted to be. “It seems Jonah couldn’t escape God’s plan for him,” the bishop said.

Jonah, an unwilling prophet, “began to preach with the zeal of a wet dish rag,” Bishop Malesic said. To his dismay, the Ninevites repented, God forgave them and they were spared his wrath. Although Jonah wasn’t a good preacher, a message from God is always more powerful than the one who bears it, the bishop said. The people of Ninevah changed their ways “because of the truth of his message. God’s word, no matter how poorly it is delivered, can still change lives – even entire communities,” he said.

In the case of St. Paul, he initially persecuted the early Christians for following God’s word. He even played a part in stoning St. Peter and sent other Christians to prison. In fact, he was on his way to Damascus to further persecute Christians there when, as the bishop related, “the Word of God spoke to him with a power that knocked him to the ground and blinded him by the light of truth.”

St. Paul accepted Jesus as his Lord and began serving the Lord by preaching the Word of God to the Gentiles, converting towns, cities and countries. “Without St. Paul witnessing the Word of God, perhaps many of our ancestors would never have accepted Christ. And because of that, we wouldn’t be Christian, either. We would still be living in darkness,” he said.

Bishop Malesic said he can relate to St. Paul, calling himself “a rather lazy believer” until he received a Bible during his freshman year in college and he began reading the Gospels for the first time.

“It is hard to describe, but I found myself moved by the Word of God, like being struck to the ground,” he said. “I changed from a reluctant believer into a person who became committed to following Jesus as Lord of my life.”

In the Gospel, Jesus tells us to “proclaim the Gospel to every creature. And then baptize those who believe. The Word comes to us from heaven and gives growth to the earth like the rain does. It is the basic mission of the Church to evangelize,” the bishop said.

He recalled spending time in Columbus on Jan. 22 to concelebrate the pro-life Mass with Columbus Bishop Robert Brennan. During the liturgy, a small group of vocal protestors barged into the cathedral shouting and attempting to disrupt the Mass. He said children were frightened, but the congregation was peaceful and prayerful. Later, at a pro-life rally at the Statehouse, the same group tried to drown out those giving witness to Christ.

“They will not find true love until they listen to the Word of God proclaimed to them,” Bishop Malesic said.

It’s easy to focus on those who haven’t heard God’s word or accepted it in their lives, he said, asking the congregation: “Are we ready to be moved like St. Paul, who was knocked to the ground midcourse by the Word of God who spoke to him? And then, are we ready to go and announce the Gospel of the Lord and make disciples of others – proclaiming our belief in the power of God? And finally, are we ready to receive the Word made flesh, the Bread of Life and the true body and blood of our Lord? May that Word made flesh give us the courage to go into the whole world to announce the Gospel of Christ so that whoever believes in Jesus will be baptized and be saved.”

After Mass, there was a short period of adoration before the bishop greeted parishioners as they left the church.