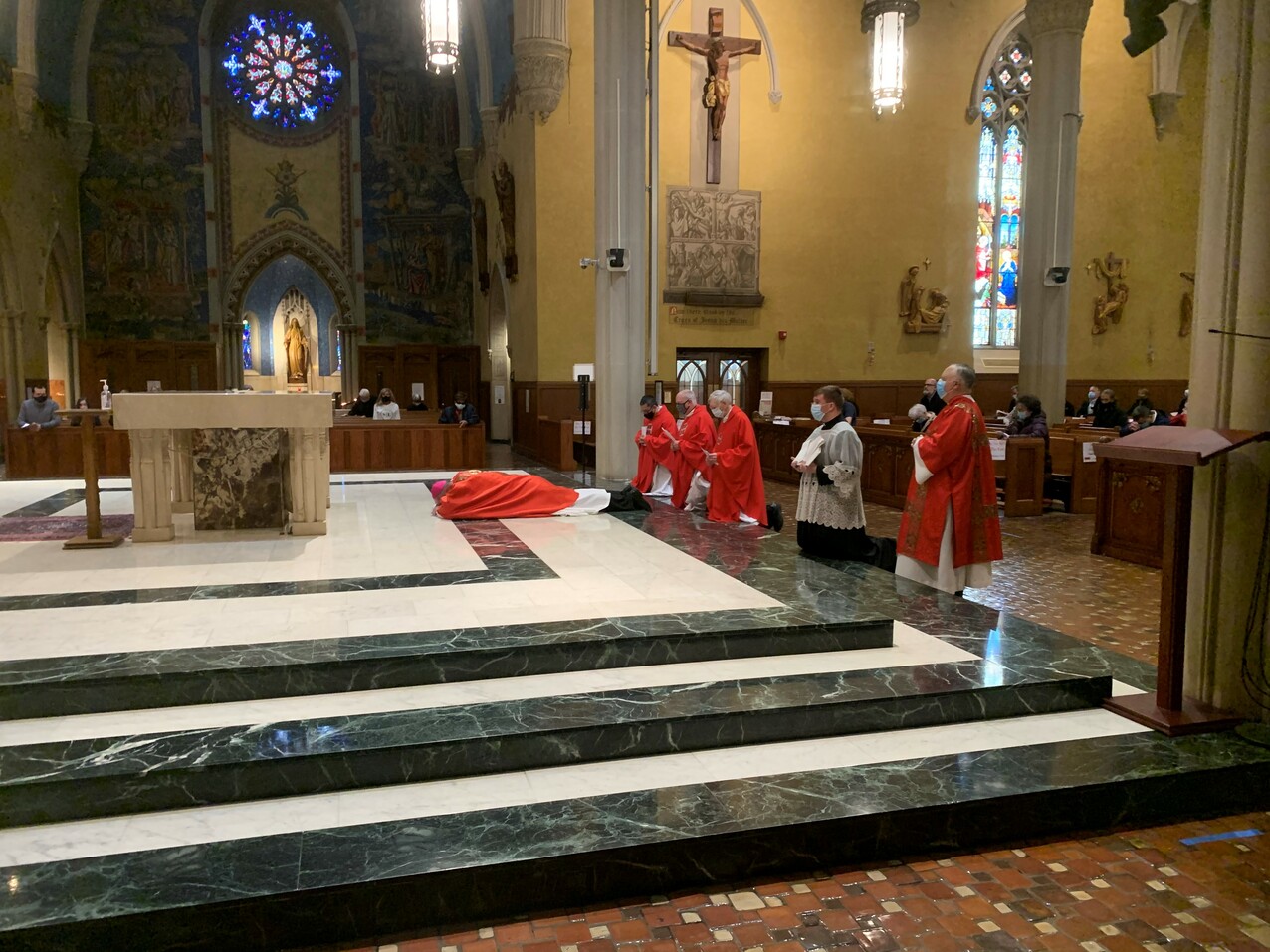 The faithful gathered in the Cathedral of St. John the Evangelist on Good Friday, April 2, for the celebration of the Passion of the Lord. Bishop Edward Malesic was the celebrant with Father Sean Ralph, cathedral rector, as homilist.

Good Friday is the only day when Mass is not celebrated. Instead, the Passion liturgy reflects on the passion and death of Jesus, with the anticipation of his resurrection on Easter.

The somber liturgy includes two readings and the Gospel, much like a Mass. However, there is no consecration.

After silently entering the cathedral, the bishop laid on the floor in front of the altar for a few minutes before beginning the liturgy. The readings and St. John’s Gospel recounting the Passion and Crucifixion were followed by Father Ralph’s homily.

He shared the story of three boys -- one a non-Catholic -- who were living in Orleans, France in 1935 and decided to play a prank on the parish priest as he heard confessions by making up the worst sins they could think of and "confessing" them. The priest caught on and after the non-Catholic boy made his “confession,” he was given his penance. The boy was told to go outside to the large crucifix, look Jesus in the eye and tell him five times, “I don’t care that you’re hanging on that cross.”

He agreed, went outside and recited his penance the first time. The next time, it was more difficult. Then his voice cracked, his eyes filled with tears and he lowered his head.

“When he raised his head again, he looked Jesus in the eyes and asked him, ‘Why are you hanging on that cross?’” Father Ralph said, noting that question is asked every Good Friday.

We all sin and as we get older, we gain a deeper appreciation of our sins and their consequences. “There is a price to be paid and today we see that price,” Father Ralph said.

“He was nailed to the cross to take away our sins,” he added.

“We ask, ‘Jesus, why would you do that for me?’ He does it because he is good and he loves us,” Father Ralph said. “Even if we stare at Christ face to face in the eternity of heaven, we can never plumb the depth of God’s love. The only response to that kind of love is to accept it as a gift and to strive to return it in the way we love our brothers and sisters.”

As for the boy in the confessional, Father Ralph said in 1940, he was baptized. Later, he was ordained to the priesthood and eventually, he became the cardinal archbishop of Paris.

The liturgy continued with a procession through the cathedral as four adult servers carried a full-size crucifix, placing it at the cross aisle where the faithful could venerate the cross. Due to the pandemic, adoration consisted of bowing or genuflecting before the cross. In non-pandemic times, people often kissed or touched the crucifix.

The liturgy concluded with holy Communion and a prayer over the people.