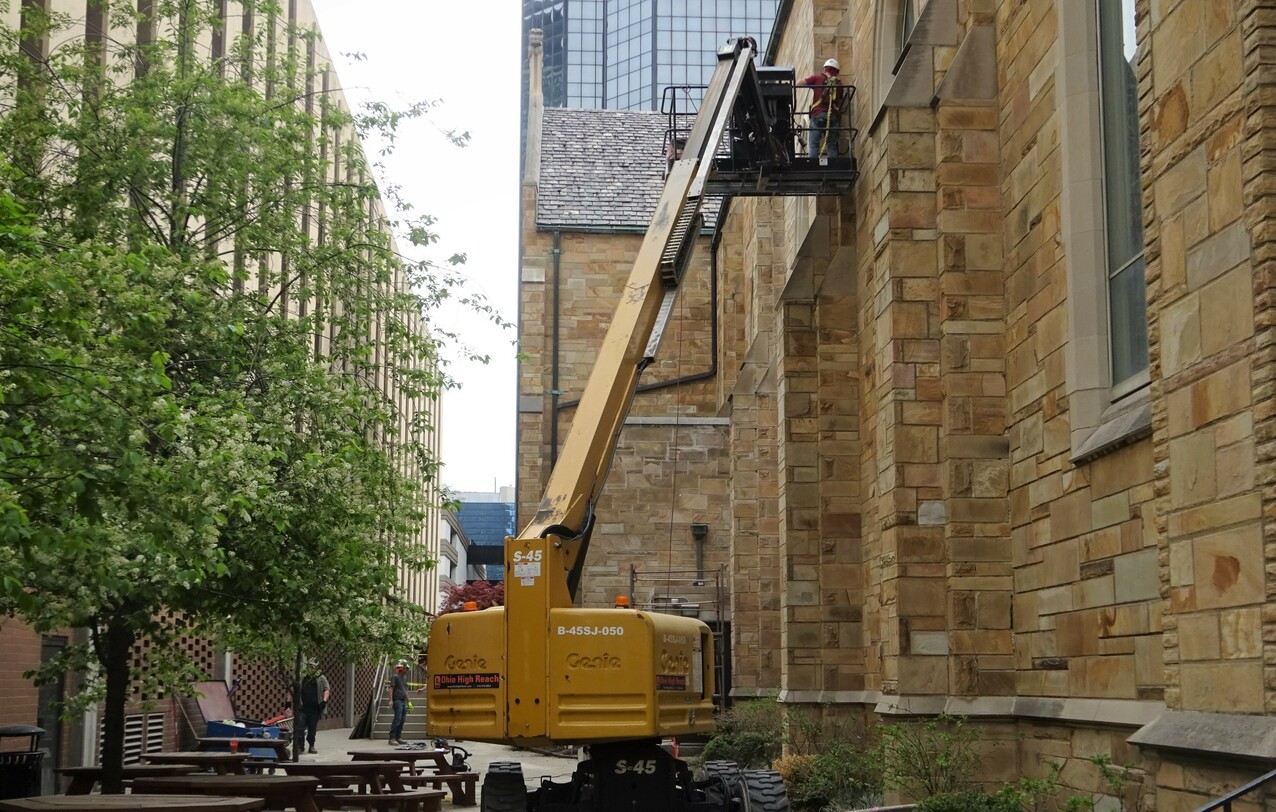 Those worshiping at and visiting the Cathedral of St. John the Evangelist during the next several months will find a major exterior renovation project underway. The work will ensure that the cathedral, the mother church of the Catholic Diocese of Cleveland, is in peak condition for the 175th anniversary of the diocese in 2022.

Crews began working on the north side of the building – closest to the parking lot and garage – shortly after Easter, said Father Sean Ralph, cathedral rector. The project will include work on the entire exterior of the building including the roofs and cleaning, waterproofing and tuck-pointing the sandstone. Exterior lighting will be added, all concrete including walkways will be replaced, the main steps will be removed and rebuilt, the handicap ramp will be improved and a snowmelt system will be added. In addition, Father Ralph said stair treads would be enhanced to improve safety. Inside, there will be some improvements to the sound system.

“We’ll tackle the façade one side at a time,” he said, in order to minimize inconvenience to worshipers and visitors. “Essentially, it is a big project that will address a lot of exterior maintenance on this grand old church.”

Father Ralph said the $4 million project should be finished this fall. “We’re hoping to wrap things up by November, before the snow falls,” he added. Work will be done Monday through Friday.

The project will mean closing some cathedral entrances as work progresses, but Father Ralph said two of the three exterior entrances will be available at all times. Currently, there is no access to the courtyard area between the church and the parking garage because of construction equipment and ongoing façade work. The gate on East Ninth Street is locked, but there is access to the handicap ramp from the parking lot.

However, as work progresses, Father Sean said a new, temporary ramp would be built at the Superior Avenue entrance so improvements can be made to the existing ramp. When that occurs, people can walk through the archway between the old chancery building and the cathedral rectory to reach the Superior entrance or walk to the front of the building and enter from East Ninth Street. 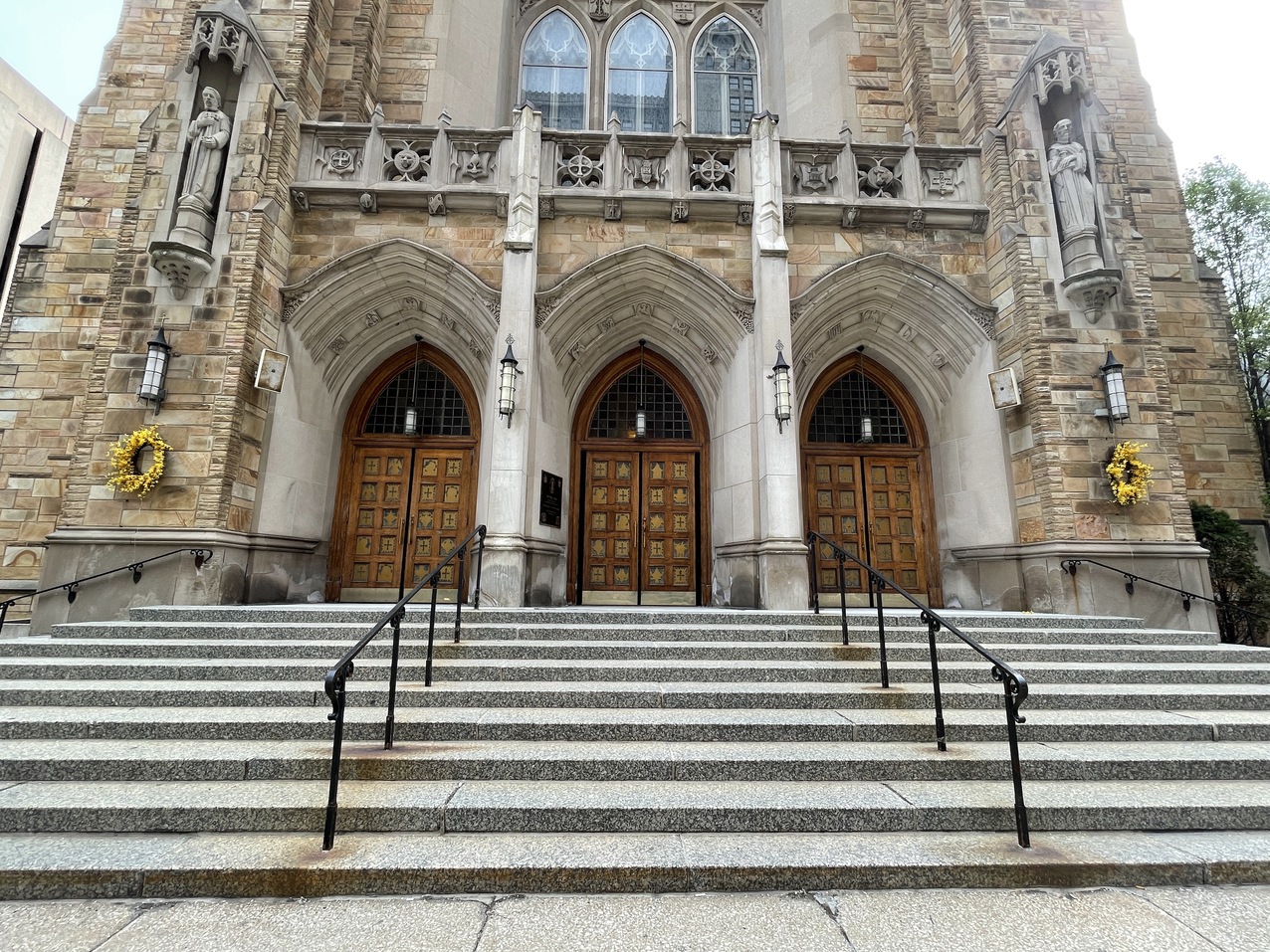 Father Sean said crews might tackle work on the front steps next. That will involve closing the cathedral’s main entrance for several weeks while the granite steps are removed, the substructure is rebuilt, drainage is improved, the steps are reconstructed using the existing slabs and the snowmelt system is installed. He said the improvements will make the steps safer and will address drainage issues. During this phase, access to the cathedral will be from the side doors off the courtyard and Superior Avenue.

This likely is the most extensive exterior project done on the structure since it was enlarged in 1946, Father Ralph said. The main section of the cathedral dates to 1848, a year after establishment of the diocese. The cornerstone was laid on Oct. 22, 1848. The first Mass was offered on Christmas Day 1848 in a temporary Chapel of the Nativity, which housed a school during the week.

The Gothic-style cathedral was finished in 1852, but financial struggles prevented completion of the interior and exterior decoration for two more decades. In 1879, a spire was added. A thorough interior renovation took place in 1884, which included the addition of stained-glass windows and black walnut furnishings in the sanctuary. During the cathedral’s golden jubilee in 1902, additional work included the installation of art glass windows from Munich, Germany.

Prior to the centennial of the diocese, the cathedral was extensively rebuilt and enlarged 1946-1948, retaining the same lines as the original structure. Marble work and hand-carved Appalachian oak reredos were added over the altar. The newly rebuilt cathedral was consecrated on Sept. 4, 1948. Then, in 1977, the interior was renovated to conform with the liturgical mandates of the Second Vatican Council. At that time, the sanctuary was redesigned and the main altar moved to its current location in the nave crossing which, ironically, is the same place the altar was in the original cathedral in the 1850s.

The Catholic Community Foundation is working with the cathedral to manage fundraising efforts for the work.

“This project will preserve the cathedral and keep it beautiful for the next generation,” Father Ralph said. “Please join me in praying for the effort’s success and for the safety of those who will labor for its completion. May our beloved cathedral continue to be a visible sign of our commitment to spread the message of God’s love today to future generations,” he added.