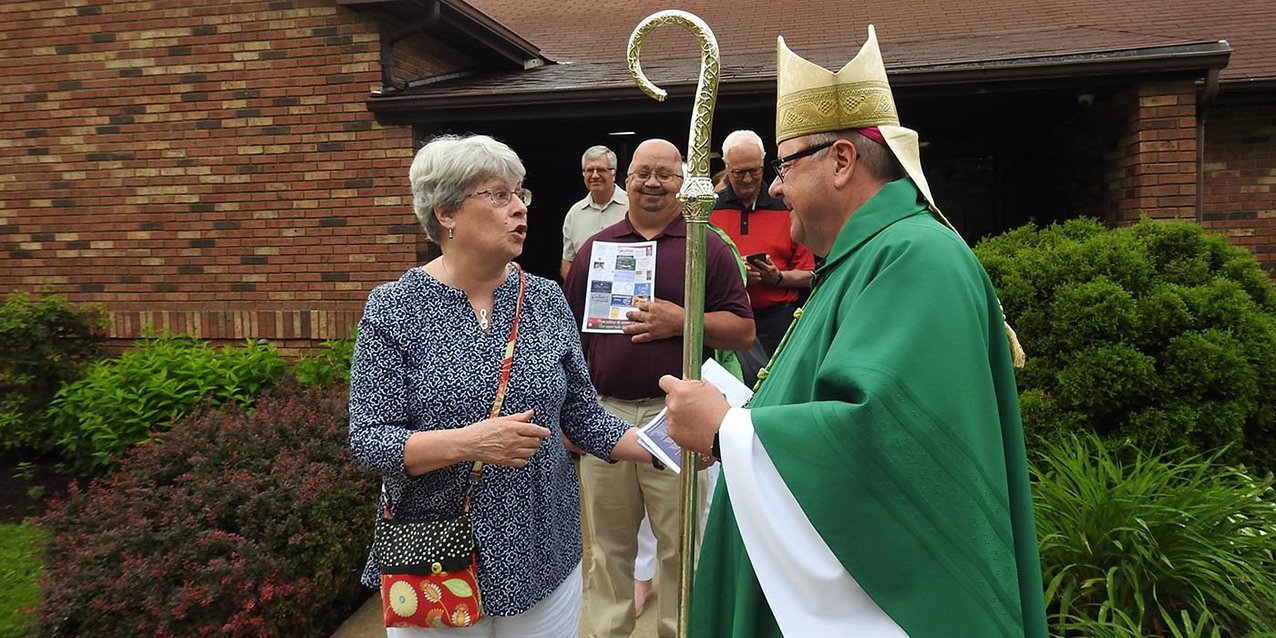 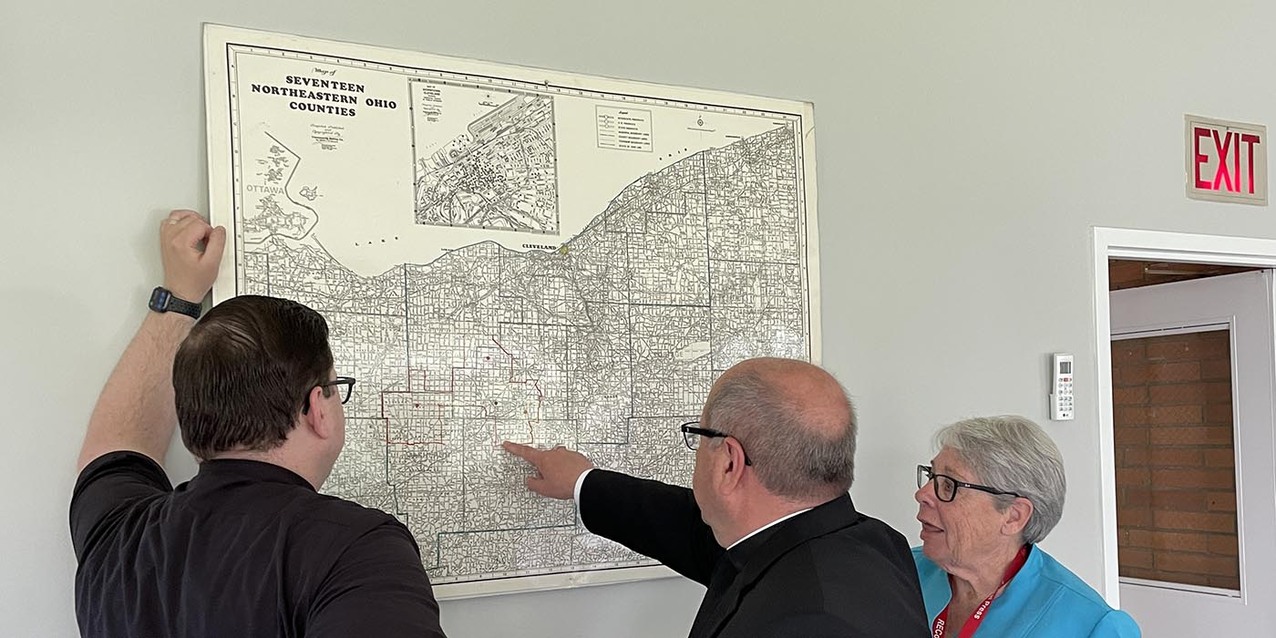 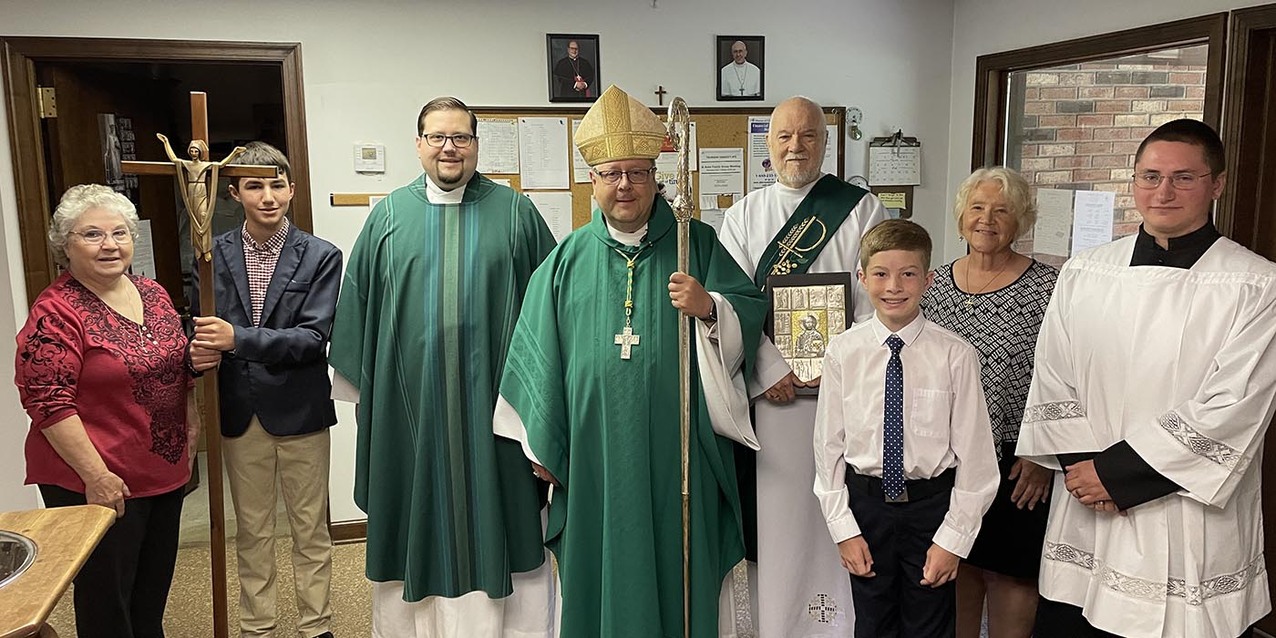 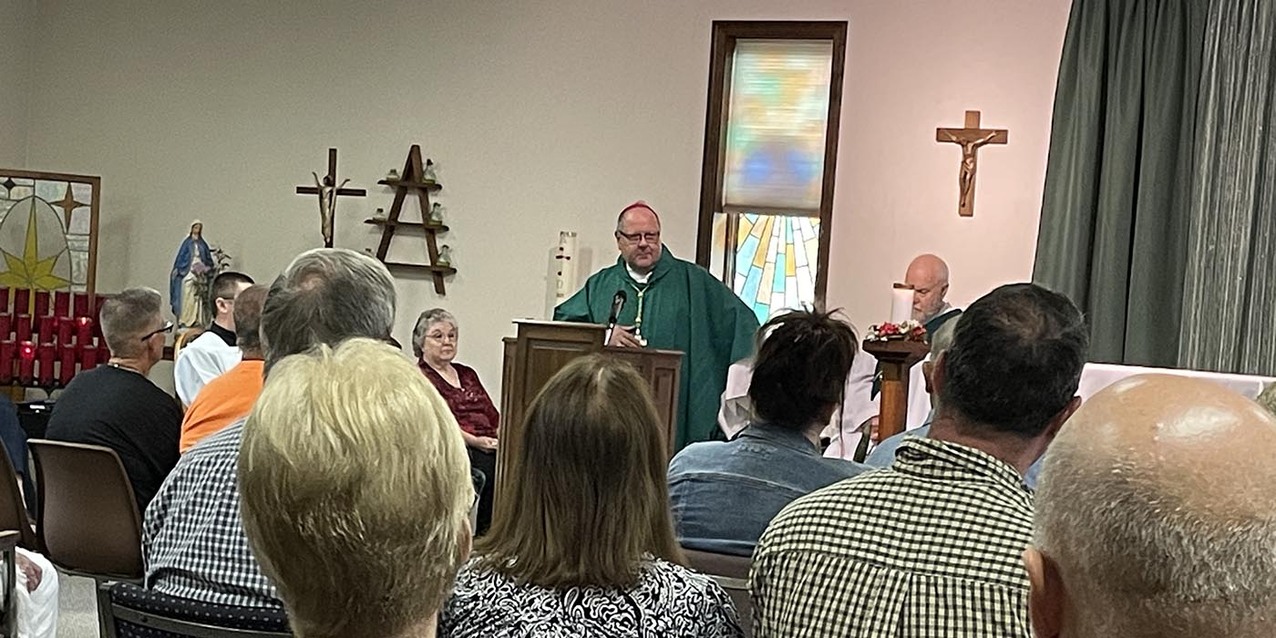 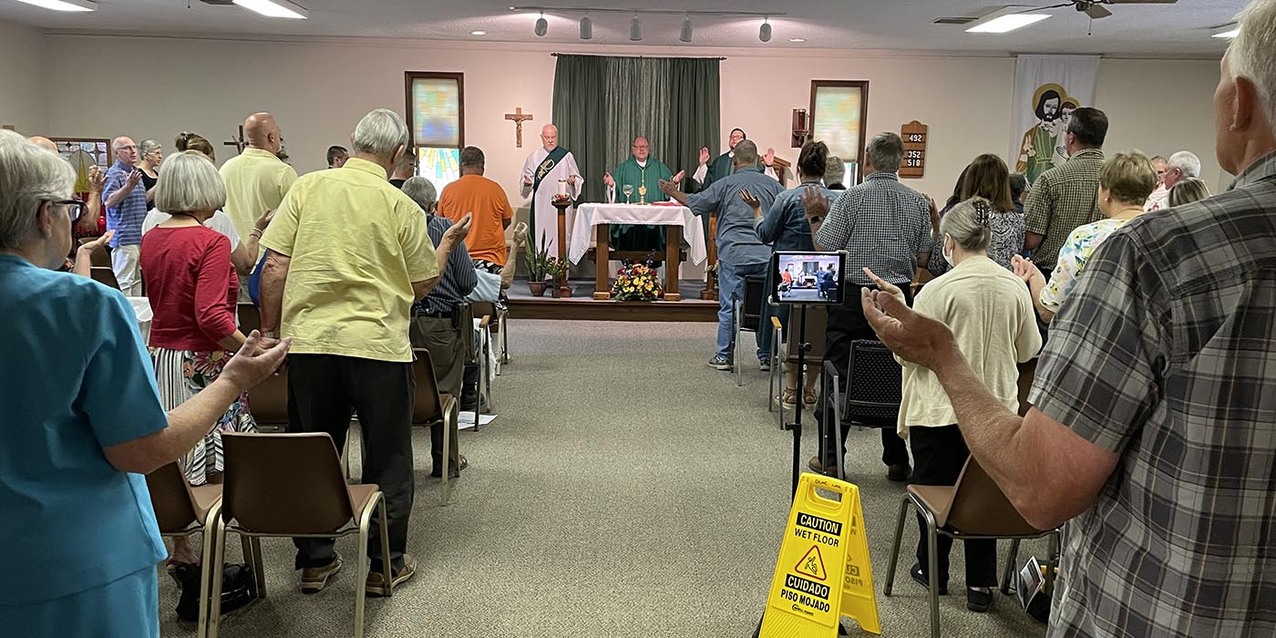 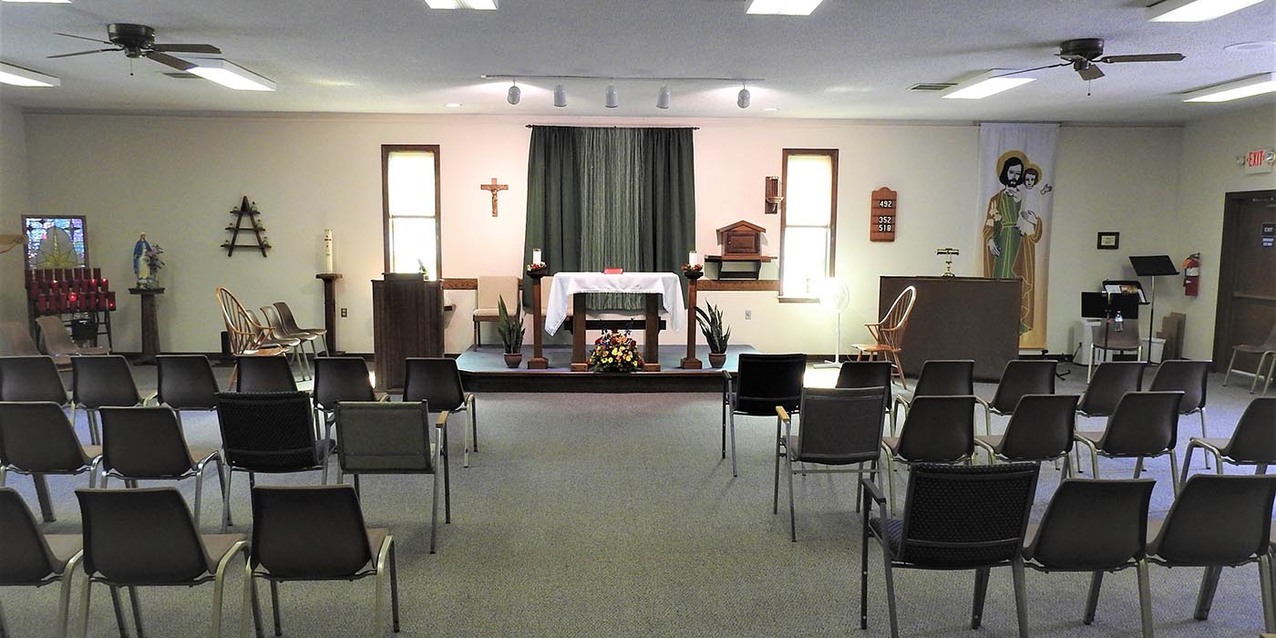 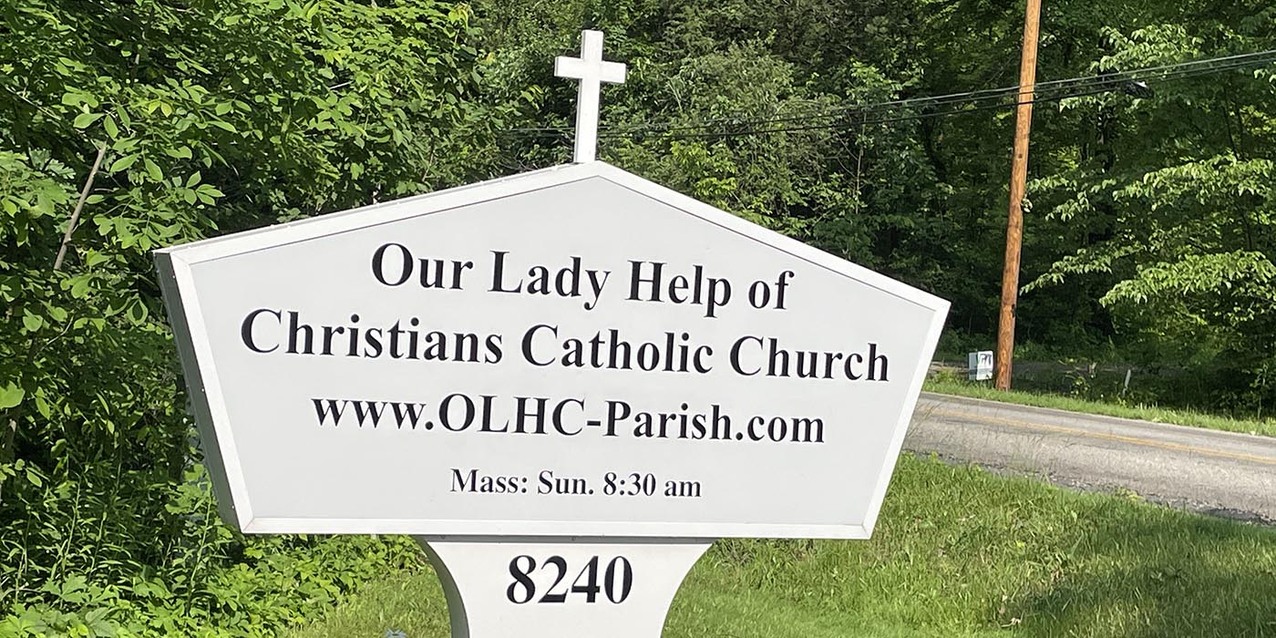 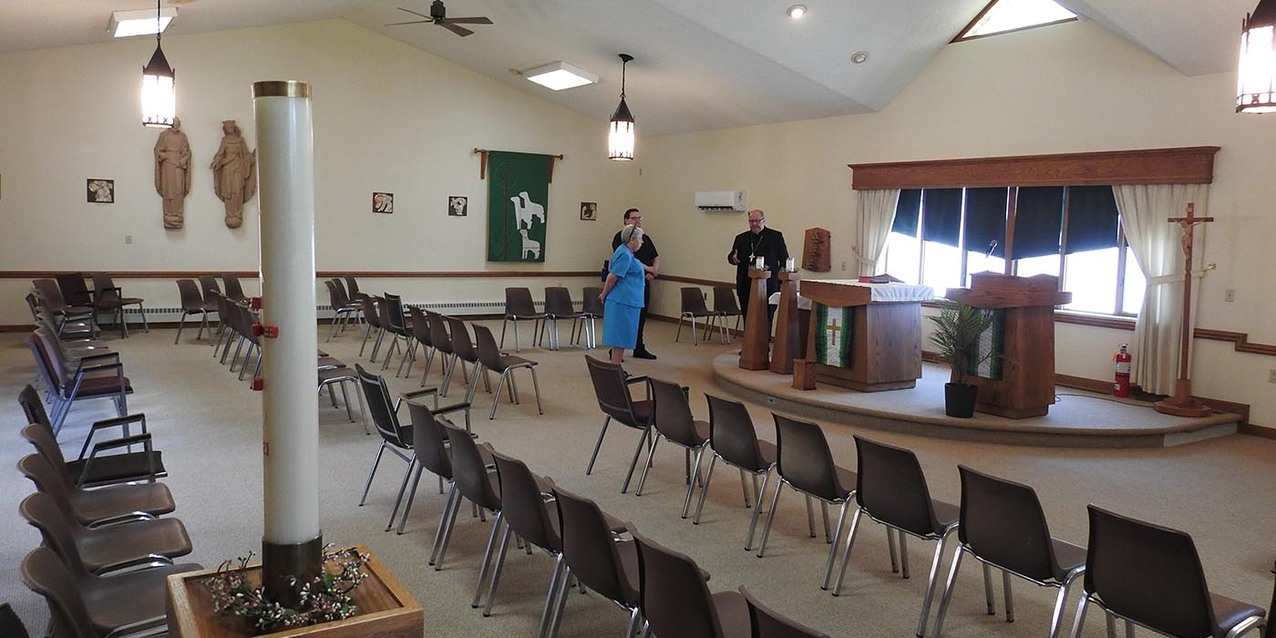 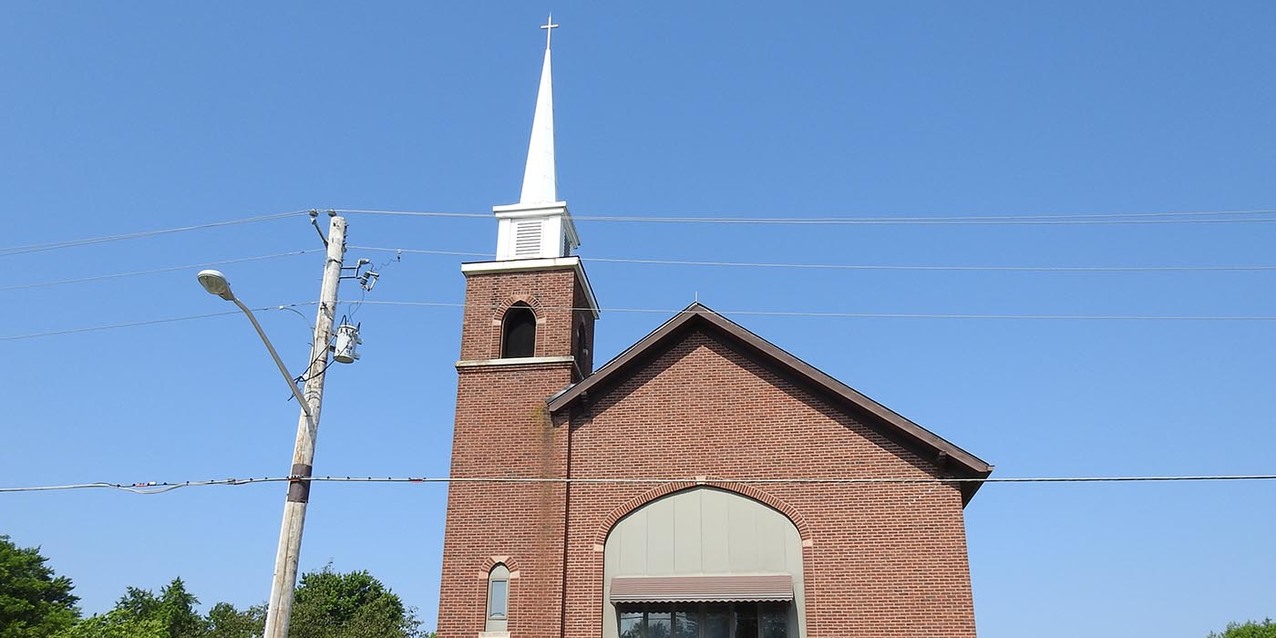 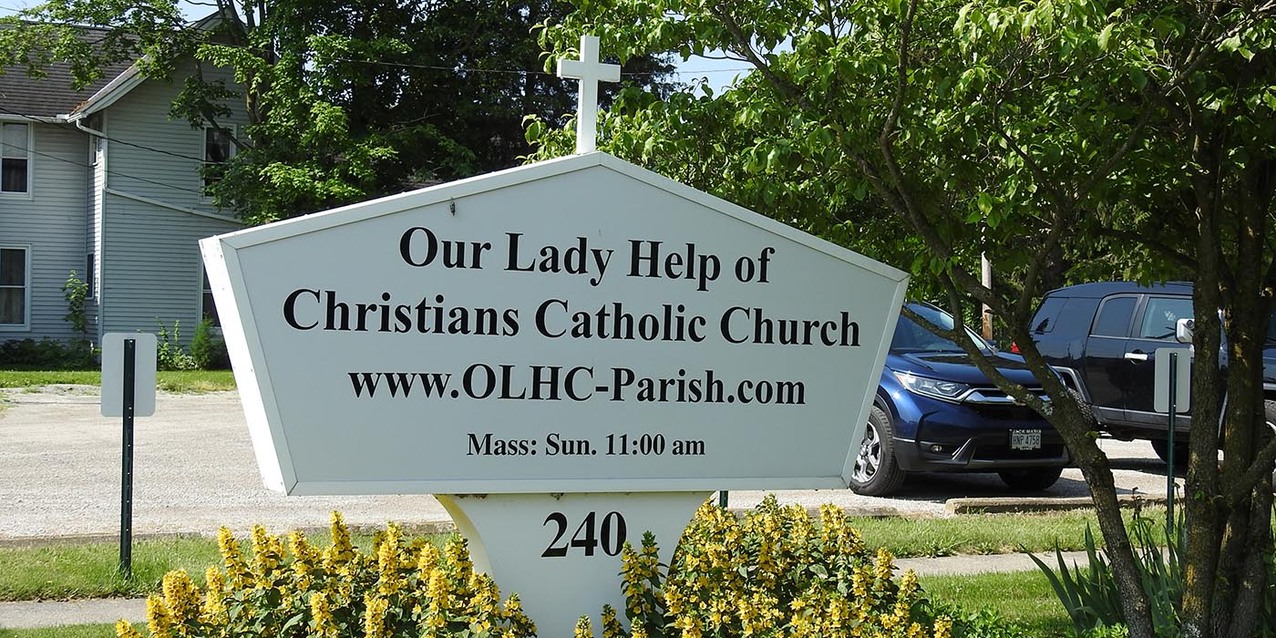 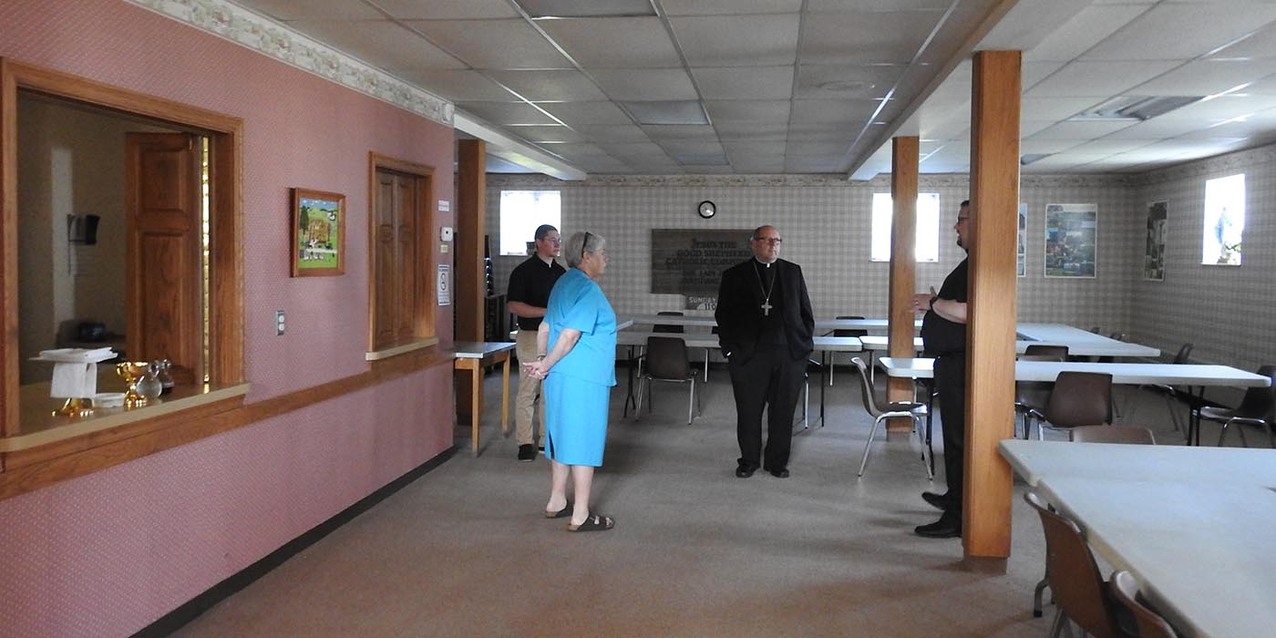 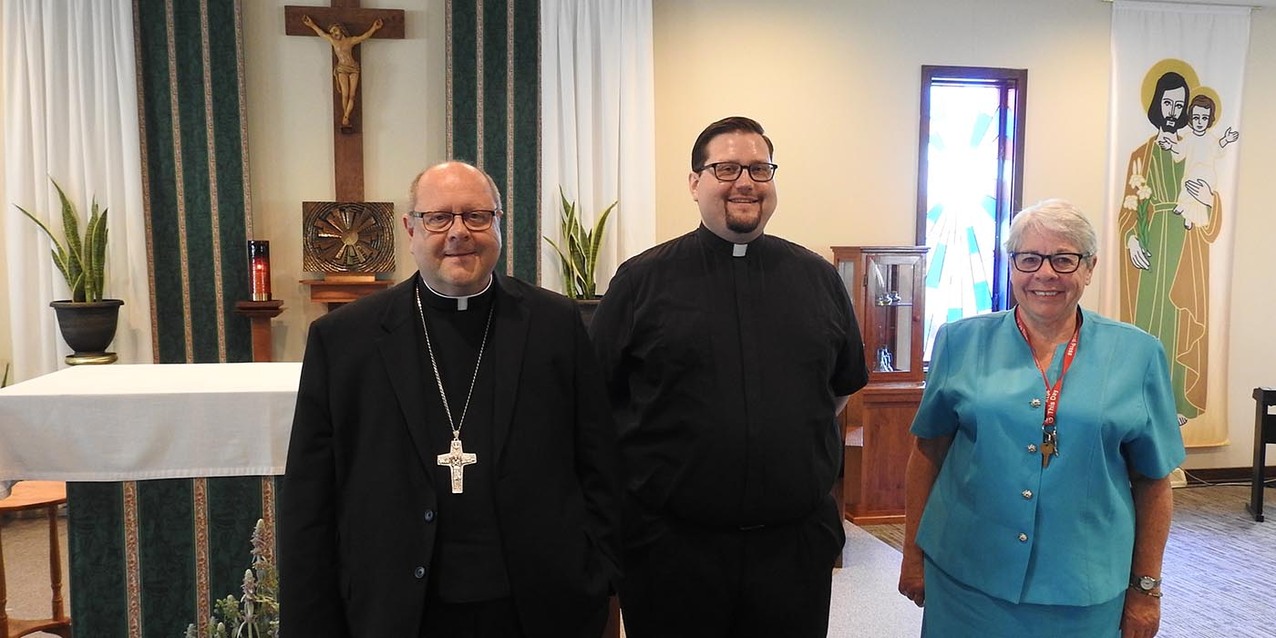 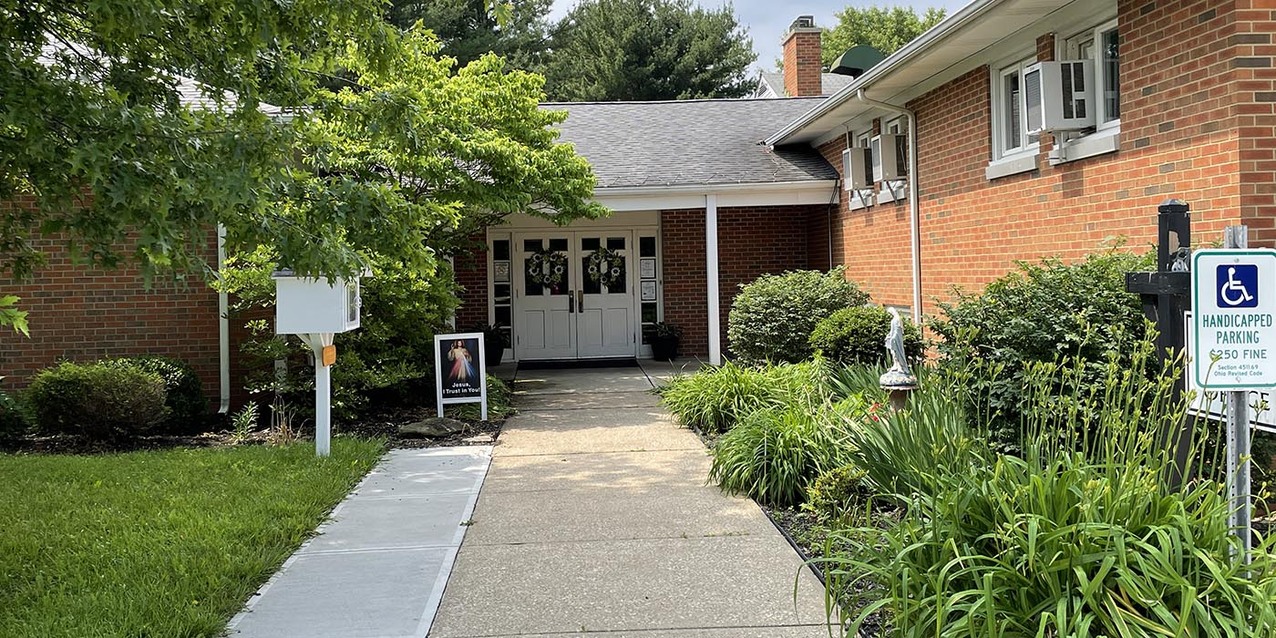 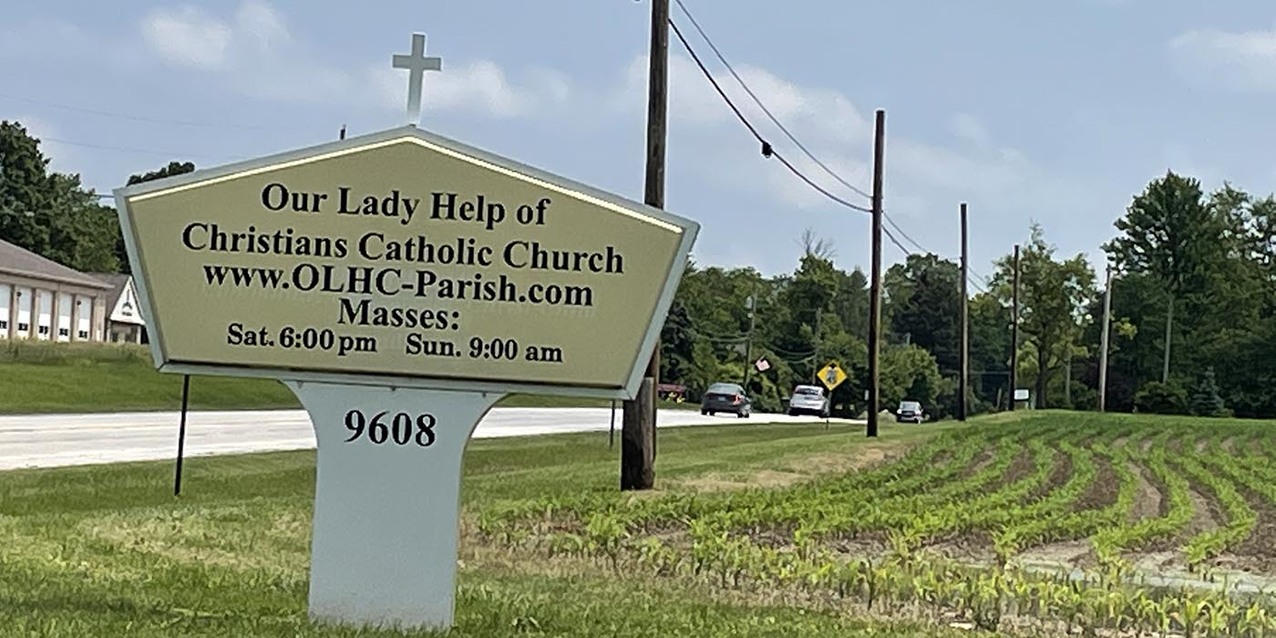 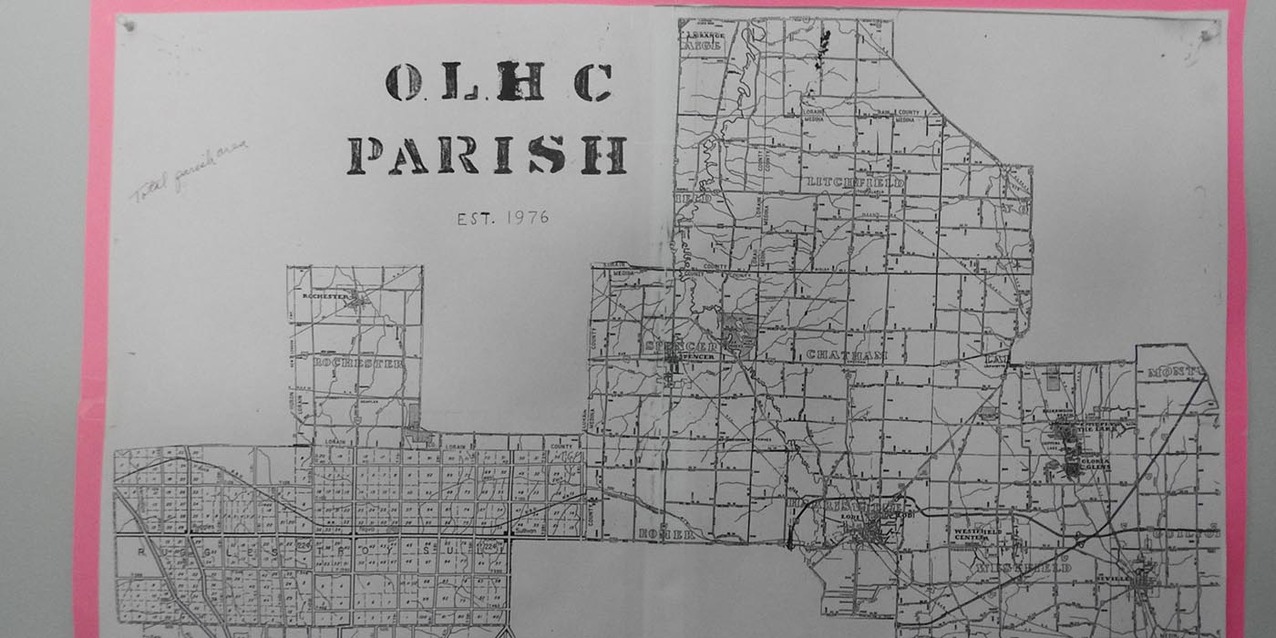 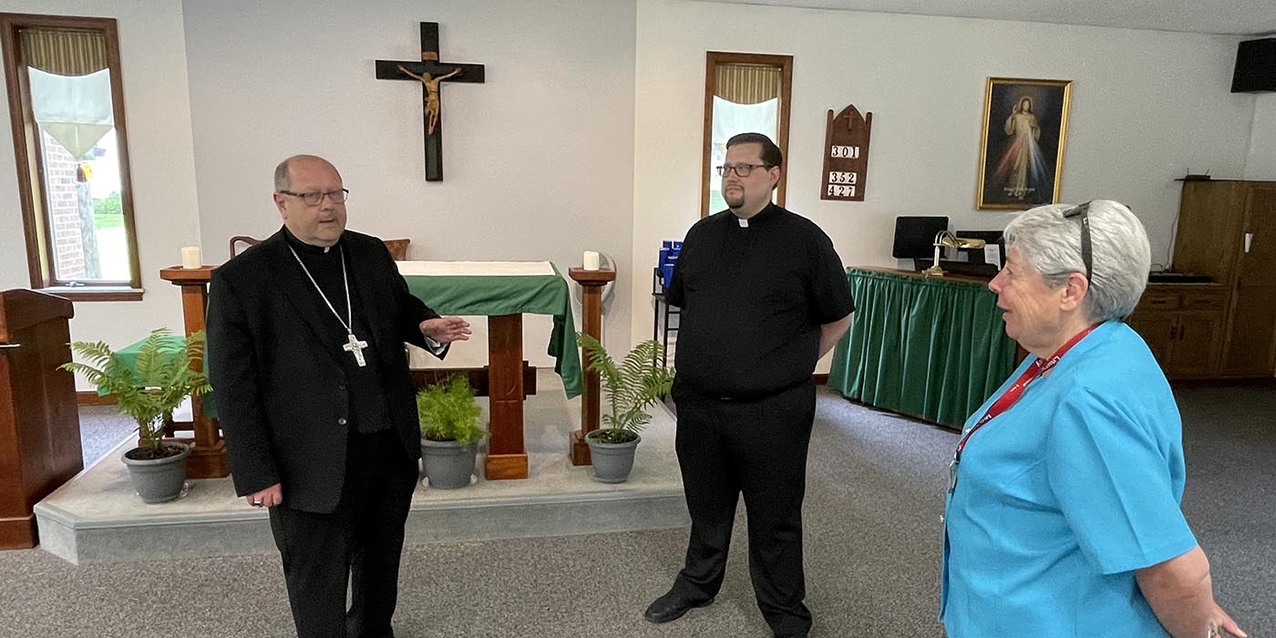 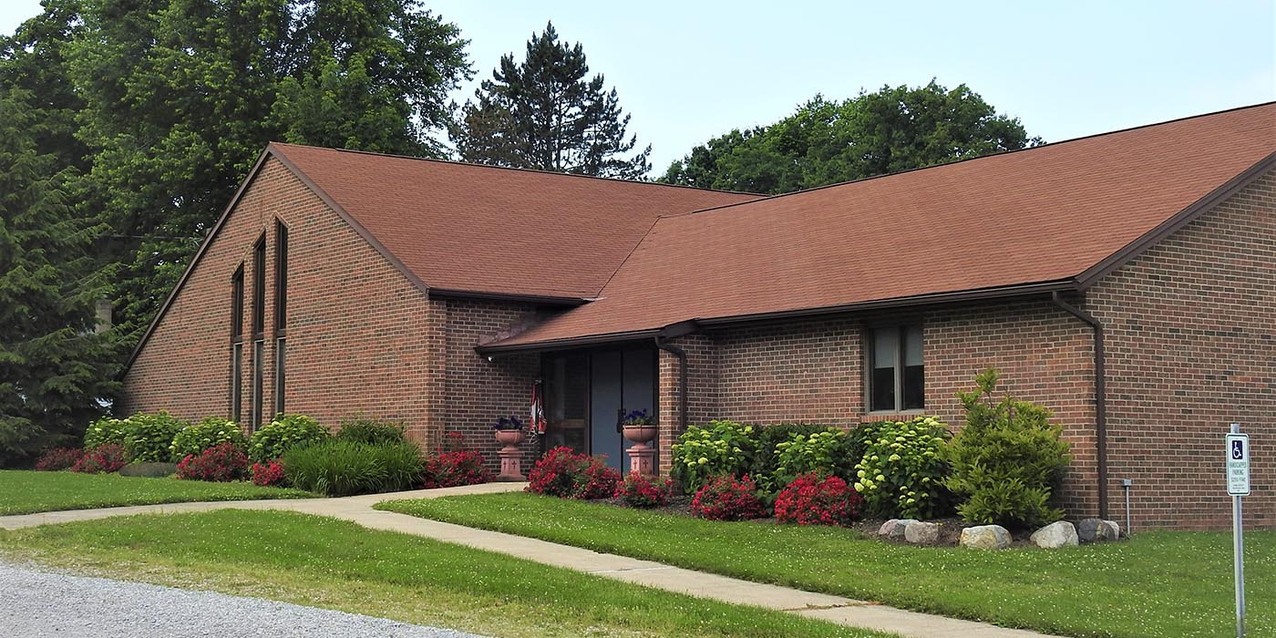 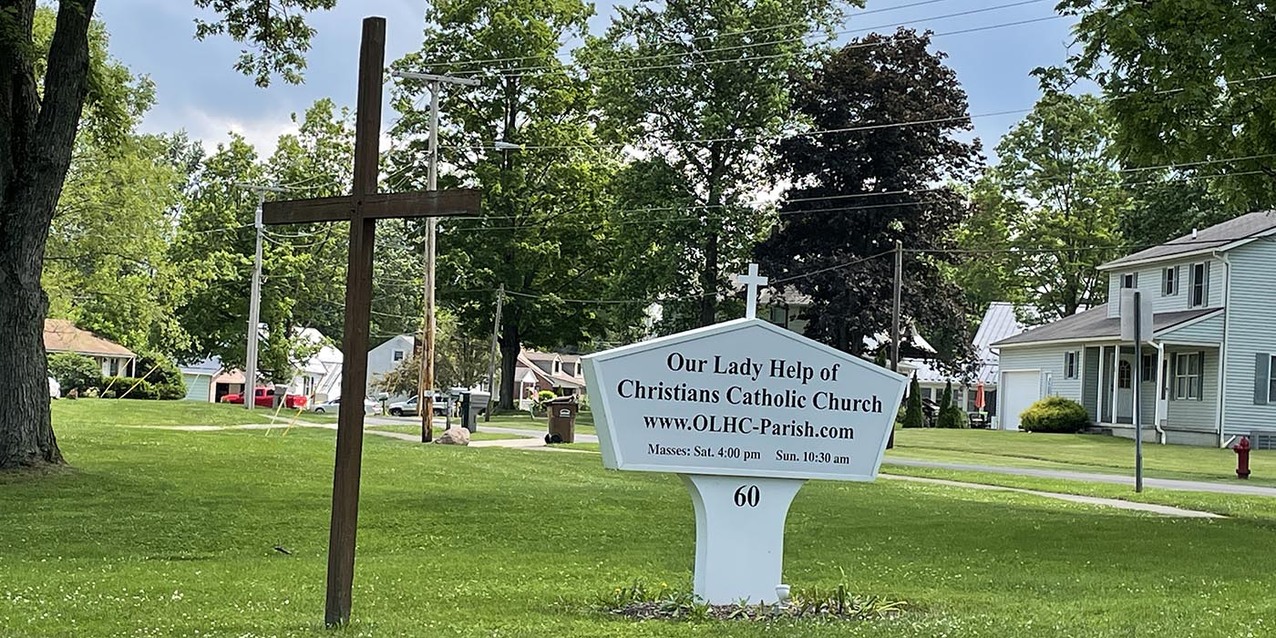 As he continues getting acquainted with the Diocese of Cleveland, Bishop Edward Malesic spent June 13 visiting and learning about the most unique parish in the diocese: Our Lady Help of Christians, which is celebrating its 45th anniversary.

Established in 1976, the parish’s footprint covers 500 square miles and extends into Ashland, Lorain, Medina and Wayne counties, four of the eight counties served by the diocese. There are worship sites in Litchfield, Lodi, Nova and Seville. After its creation by Bishop James Hickey, the parish functioned under a new concept with a pastoral team consisting of clergy – originally three priests – plus vowed religious and the first pastoral minister in the diocese. Today. The parish is served by its pastor, Father Edward Suszynski, parochial vicar Father Curt Kondik, Deacon Michael Jervis and Sandra Lynn, pastoral associate.

Father Suszynski said a former Catholic Charities’ site in Litchfield that once housed a home for boys with special needs was repurposed as a worship site, the administration site for the new parish and a home for the pastoral team. The Lodi and Seville sites feature multi-purpose brick buildings constructed with help from parishioners. For the Nova worship site, the diocese bought an old church that was built in 1874 and once housed the United Brethren community. Later, it was used as a recreation center. It’s since been renovated with parishioners doing much of the work.

Father Suszynski credits the parishioners, who he said took ownership of the new parish, for establishing strong, lasting roots. He said parishioners ensure the spacious grounds and buildings at each worship site are maintained. In non-pandemic times, the parish gathers regularly for functions that include members from the four worship sites. This week, the Seville site is hosting the annual spring rummage sale, one of the parish’s biggest fundraisers.

Bishop Malesic celebrated 8:30 a.m. Mass on June 13 at the Lodi worship site. He also greeted parishioners before visiting the other parish sites.

“You are unique,” he said. “This is a beautiful part of our diocese and even our state.” And referring to Father Suszynski, he quipped, “Good first name,” which drew some laugher from the congregation.

The bishop noted that much of the parish is rural and that brings back memories of his time in Lancaster County, Pennsylvania, which is largely farm country with lots of Amish and Mennonite communities.

“Thank you for inviting me. I feel very much at home,” he added.

Reflecting on the day’s Scripture readings and Gospel, the bishop talked about some simple elementary school projects he did to help understand the basics of life. These projects sparked his interest in biology, which he pursued in college before answering the call to his priestly vocation.

In one project, students cut the top off small milk cartons, filled them with soil, planted seeds provided by the teacher and placed the cartons in the sunlight on a windowsill. They carefully watered them and waited for a few days until the seeds sprouted. Soon, the plants grew large enough that the students could take them home and plant them in the garden. Eventually, a flower blossomed, the bishop said.

He admits they didn’t understand how the seed turned into a flower and how it could fit into that tiny container. The bishop also recalled visiting a priest friend from Kansas whose family had a farm. “I was surrounded by wheat,” he said, remembering that he had heard that if you listen, you can hear wheat grow. “Somehow, the wheat grows mighty fast in the Kansas soil, just like the plans in our farms out here. From tiny kernels come great things.”

We all began as just a few cells. The bishop asked if parents ever thought their children would grow so big. “Did you ever notice them change from one day to the next? But they did,” he said.

“Jesus was expert at using everyday experiences to teach about the mysteries of God,” Bishop Malesic said. He used parables in the day’s Gospel to teach about a greater truth: the kingdom of God. He said it’s like scattered seed that grows slowly until one day, we wake up and notice it. “Eventually, if we are patient enough, it is time for the harvest. And the day will come when even we are harvested home to God,” he added.

We aren’t far from the kingdom of God, but it might be dormant like a seed waiting for water to break the shell and light to help it grow. “Sometimes, it takes a bit of tilling the soil, a bit of loosening the environment around us, a fertilization from the word of God and a bit of nourishment from the sacraments and the support of those around us who keep reminding us that we aren’t that far from the kingdom of God.”

But sometimes we get impatient with ourselves. “It takes time to turn a seed into a plant. Or, as a wonderful confessor once told me, ‘You don’t go to sleep as a baby and wake up as an adult.’”

In fact, “God is patient with us, even when we are not,” the bishop said.

He recalled a story about Pope St. John XXIII who, shortly after his election as pope, was unable to sleep as he worried about the problems facing the Church. Then, he heard the parable of the man who slept and his crops grew. So, before he went to bed, he told God, “Listen, Lord, this is your Church. I’m going to sleep.” He did, and the Church continued to spread and grow, the bishop said.

“So, the story of today’s Gospel should give us great hope. Even if we don’t see the good things that God has prepared for us yet, it is all there packed within us. Maybe it’s there just in seed form; but even the smallest of seeds can bring about the largest of bushes, And even the smallest amount of goodness within us, when watered with faith and directed toward God’s Son and always with God’s grace, can bring about the best of things for us – salvation, peace, joy and finally, heaven itself,” Bishop Malesic said.