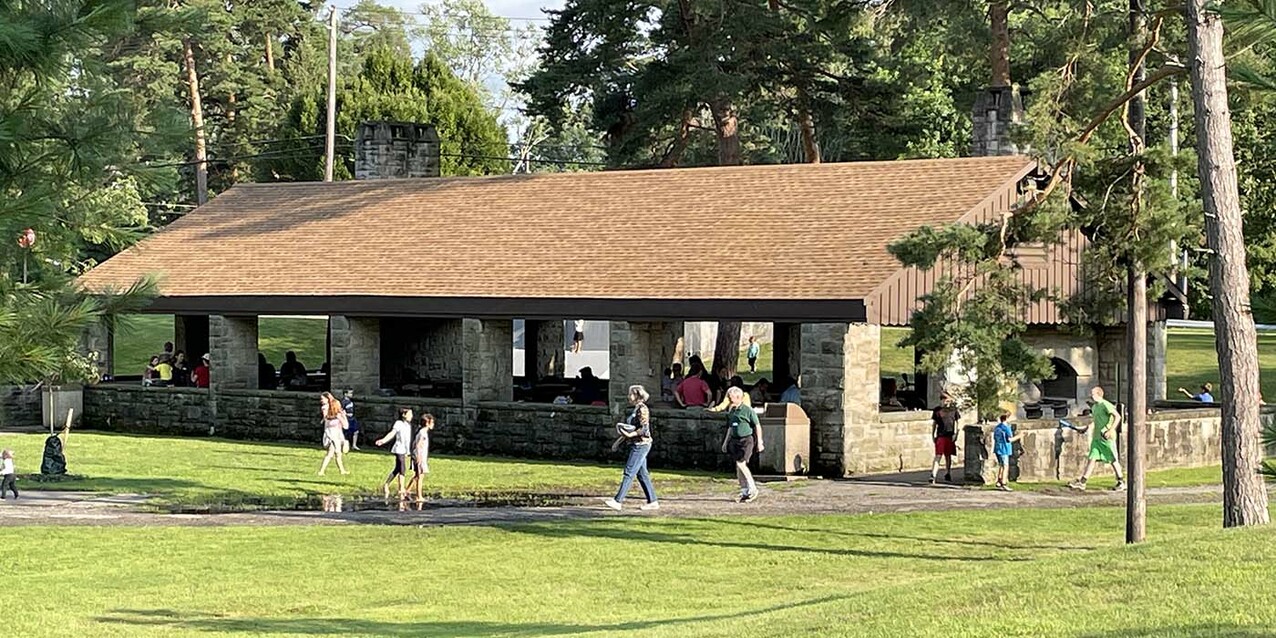 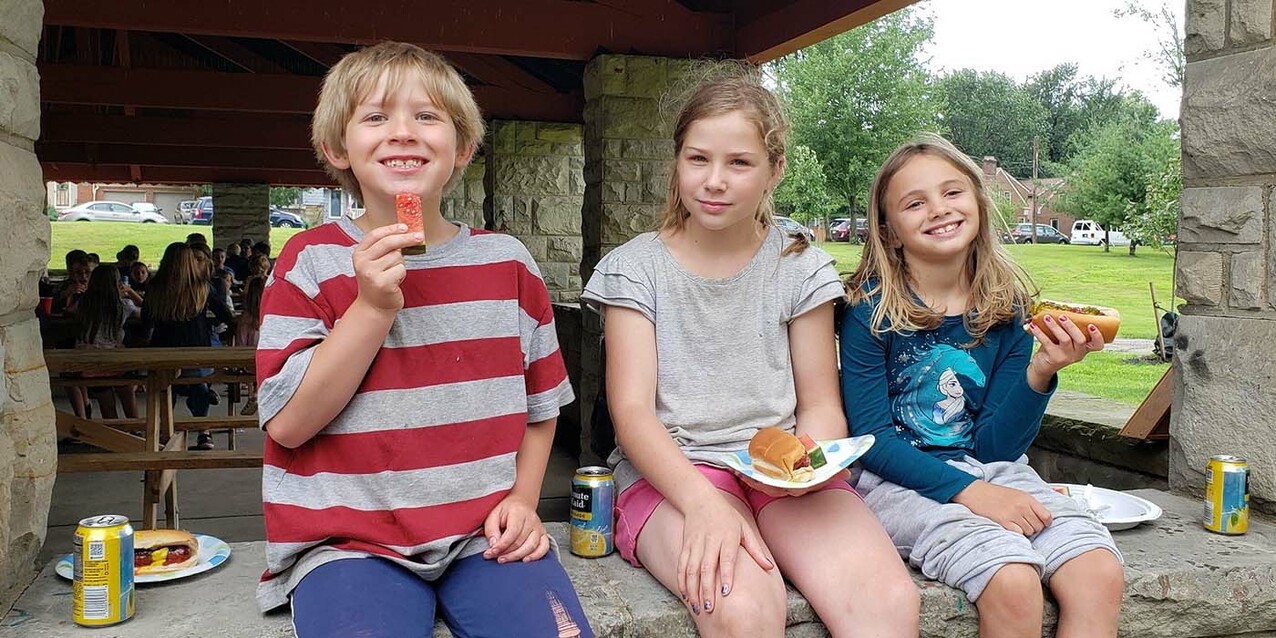 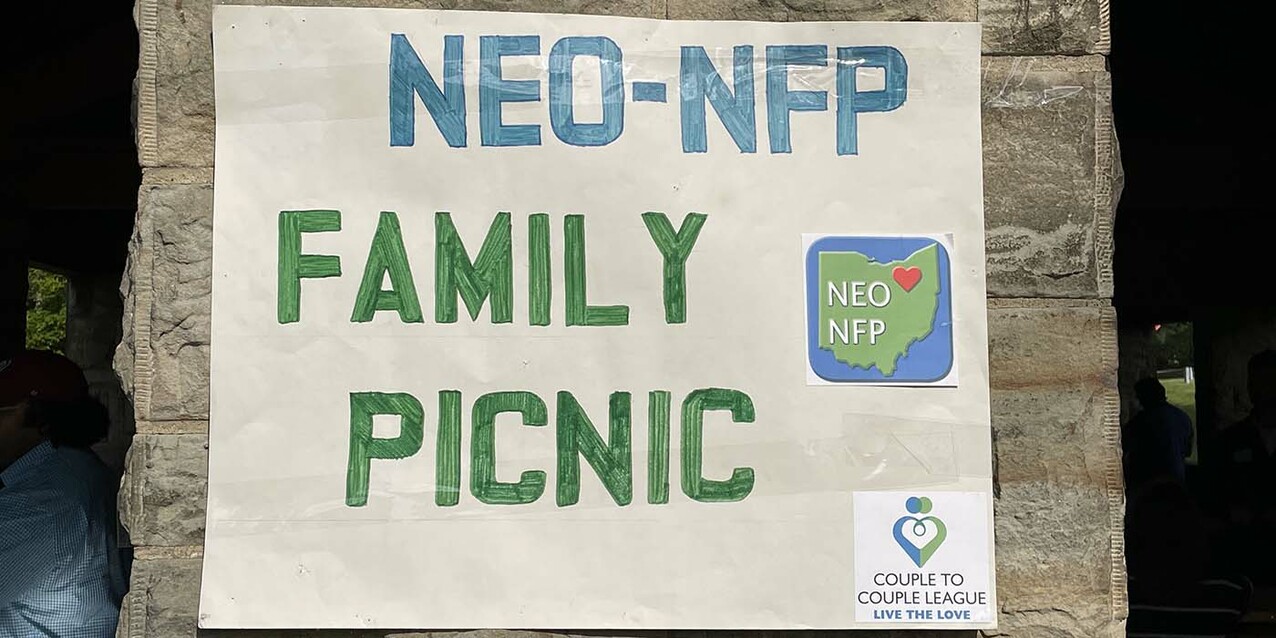 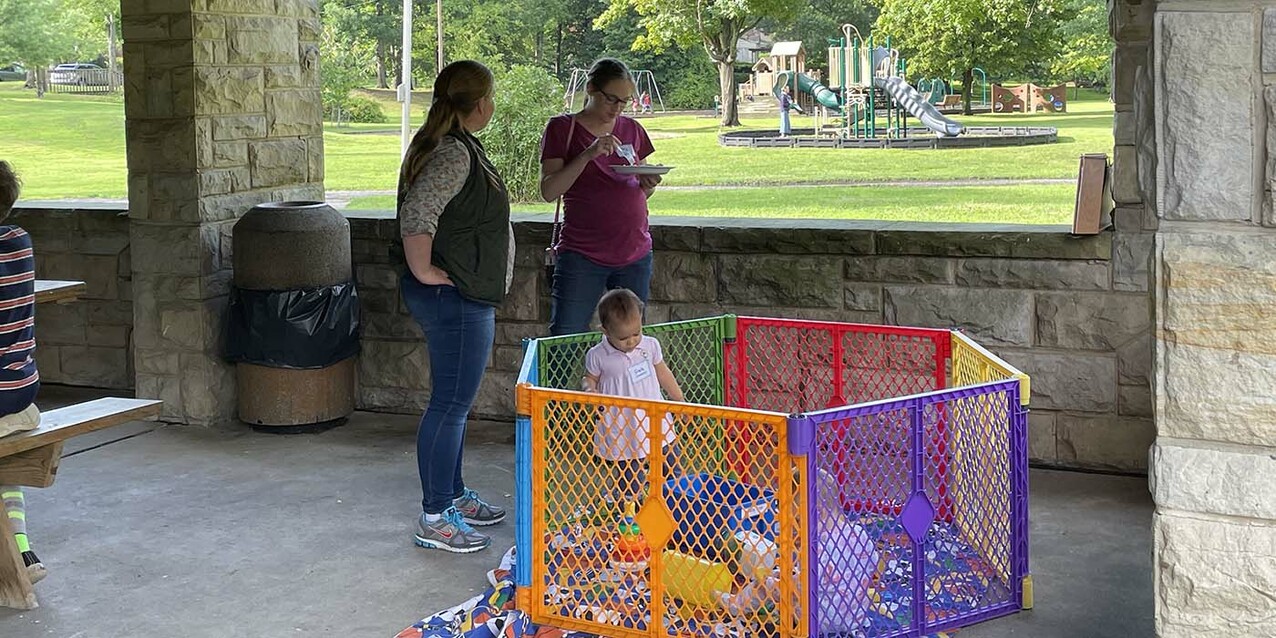 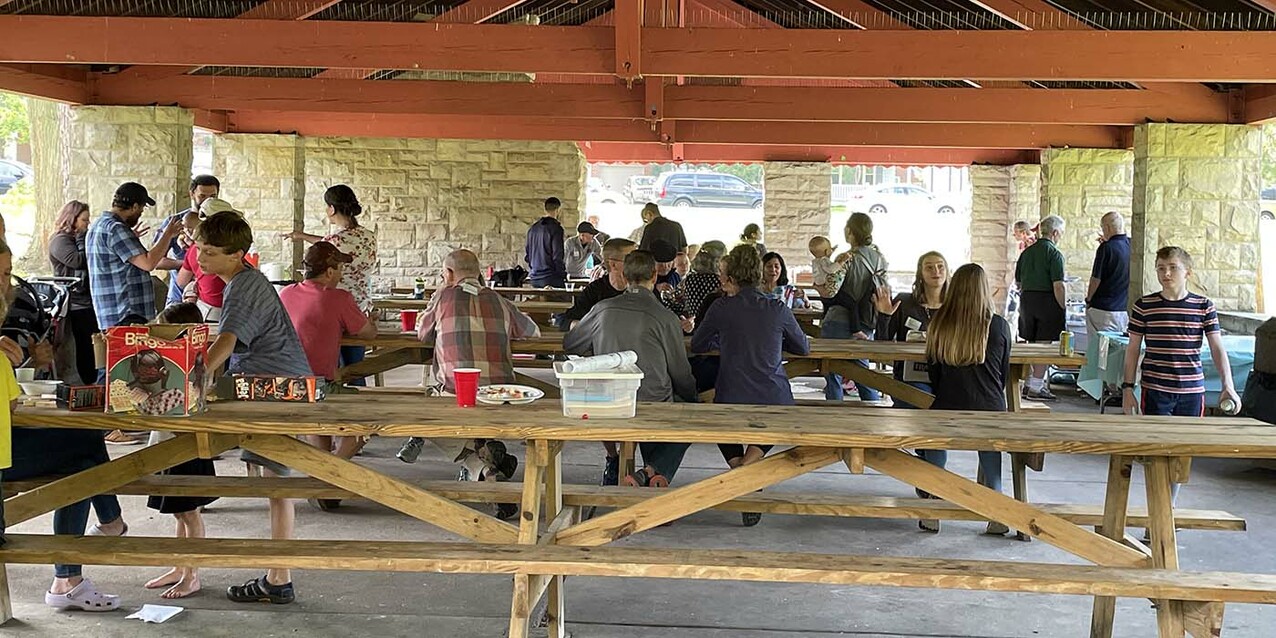 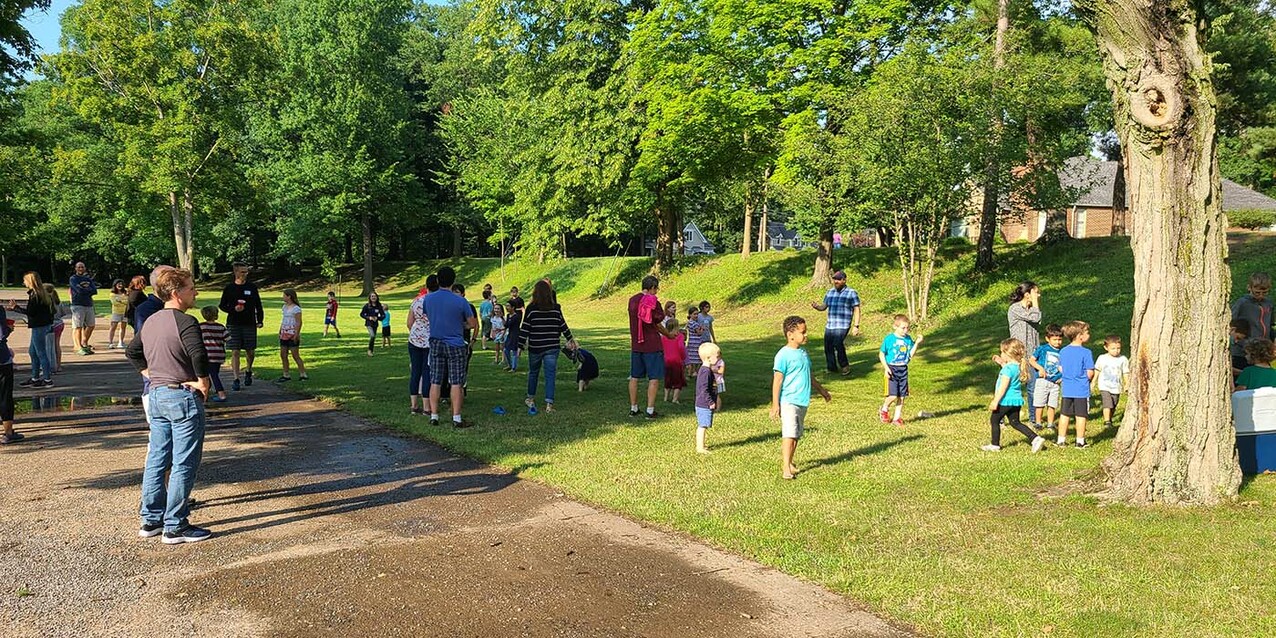 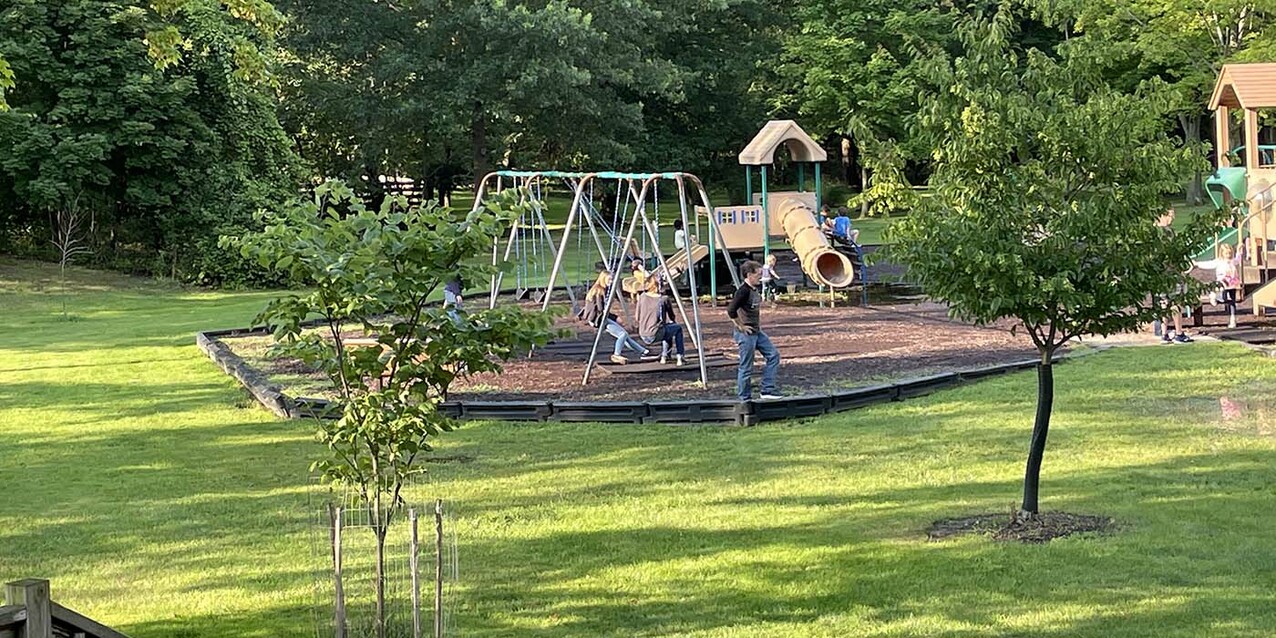 Members of the NorthEast Ohio Natural Family Planning group and Couple to Couple League were looking forward to the annual picnic on July 18, especially after the coronavirus pandemic forced cancellation of last year’s event. According to Mary Ellen Jakubisin, who helps coordinate and organize the groups and events, it was a chance for group members and their families to enjoy an in-person event after a year filled with pandemic restrictions.

Things looked a bit dicey in the morning as heavy rain flooded some roads, but by early afternoon, the rain subsided, the sun began shining and temperatures warmed up.

About 100 people from about two dozen families turned out for the picnic at the Bain Park Pavilion in Fairview Park’s Bain Park. Hot dogs and tableware were provided; attendees were asked to bring a side dish or dessert to share.

Dozens of children enjoyed playing on the swings and climbing toys. Others played games and ran around on the grassy areas while some of the younger children played in the pavilion under the watchful eye of their parents. One of the highlights of the afternoon was the popular balloon toss.

Rachel O’Donnell said the group was helpful when she and her husband relocated to Cleveland from Jacksonville, Florida about 10 years ago, shortly after the birth of their first child.

A native of Wisconsin, her husband is from Cleveland. They wanted to be closer to family and decided to move north, settling in Strongsville, where they are members of St. Joseph Parish.

“We have one set of grandparents here and the other in Wisconsin,” she said, so they are able to visit more often.

The O’Donnells struggled with infertility for a time before the birth of their first child. They follow NFP and now have four children, ages 10, 8, 3 and 1. “We belonged to a group of Catholic families in Florida and many of them followed NFP,” she said. When they decided to move to Florida, Rachel O’Donnell said she did some research on the internet and connected with Jakubisin, who introduced her to the local NFP group.

The group has several events throughout the year, including a cookie exchange at Christmastime at the Center for Pastoral Leadership, O’Donnell said. It’s a loosely structured group that provides peer support and friendship, she added.

Lina Simms grew up in Cleveland but moved to the Washington, D.C. area where she met her husband. They decided to move back to Cleveland about seven years ago because it was a better place to raise a family. “Mary Ellen was one of the first people I met,” she said, explaining she had done some online research looking for a Catholic group for families. “Two days after we moved here, I went to a book discussion group and met some people who have become fast friends,” Simms said. “We just clicked.”

The Simms family includes four daughters ages 8, 6, 3 and 1. They live in Lakewood and are active at St. James Parish.

“Mary Ellen is responsible for about 95% of the people I know,” Lina Simms said.

In addition to her involvement with the NFP and Couple to Couple League, Simms helped establish a family-friendly confession program at St. James and an Intentional Disciples group that she said focuses on “the beauty of being Catholic.” It meets monthly on Saturday. She also helps with a group called Light for Love, an evangelization group that meets monthly on Wednesday nights at St. James. They invite anyone into the church to light a candle and to pray for someone they love.

Jakubisin said more information on marriage and family life, resources for young couples, singles, NFP, the Couple to Couple League and more is available on the Catholic Diocese of Cleveland’s Marriage and Family Ministry web page