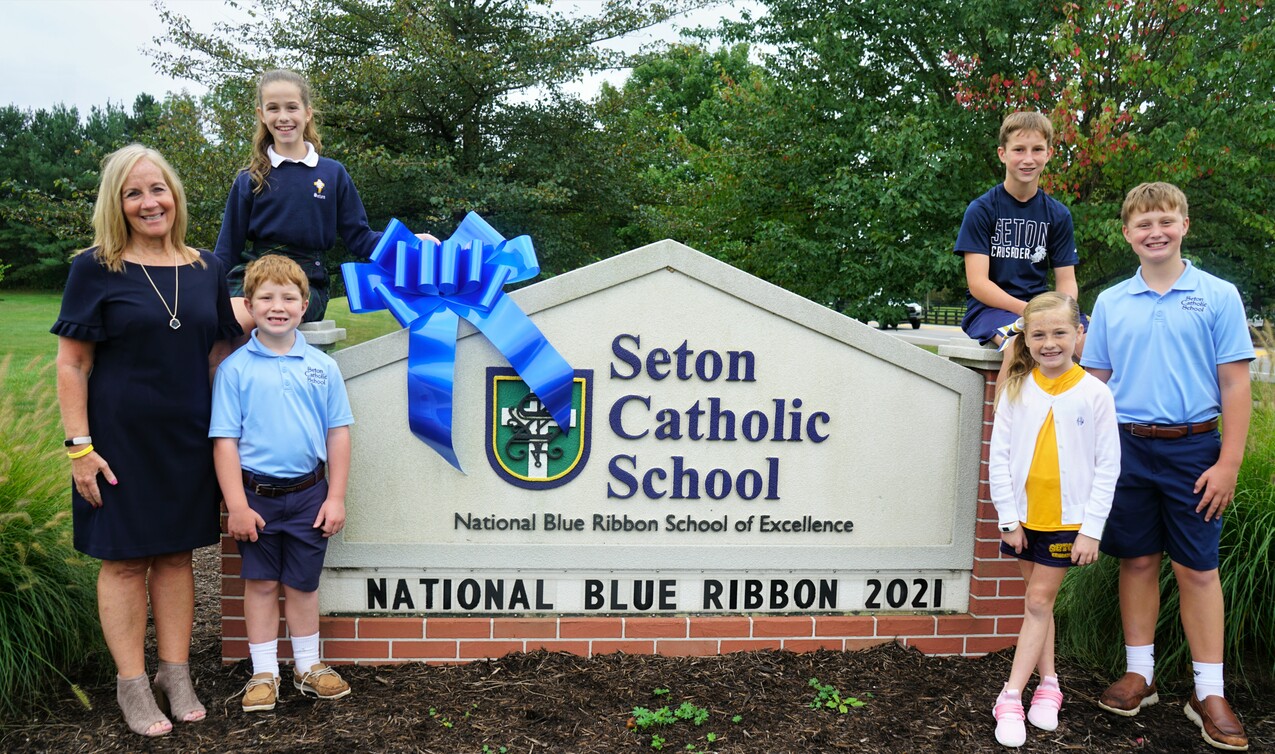 U.S. Secretary of Education Miguel Cardona recognized Seton Catholic School of Hudson as one of 325 schools nationwide and one of only 23 private schools in the nation as a National Blue Ribbon School for 2021.

The recognition is based on Seton Catholic’s overall academic performance as an exemplary high-performing school. Seton Catholic and the other winners will be recognized formally on Nov. 4-5 in a ceremony in Washington, D.C.

“I am so proud to share that Seton Catholic School has been named a National Blue Ribbon School,” said Karen Alestock, Seton Catholic principal. “This is the second time that our school has earned this prestigious award – the first in 2009 and now in 2021. Our strong faith-based community is dedicated to academic excellence and to meeting the physical, social and emotional needs of our students. I am grateful to my staff who ministers tirelessly, to our board of directors and Leadership Teams, and to all of our Seton families. Together we have been Seton Strong, committed to our faith, our mission and to one another.”

The National Blue Ribbon Schools award affirms the hard work of educators, families and communities in creating safe and welcoming schools where students master challenging and engaging content. Now in its 39th year, the program has presented approximately 10,000 awards to more than 9,000 schools.

The U.S. Department recognizes all schools in one of two performance categories, based on all student scores, subgroup student scores and graduation rates:

“This year’s cohort of honorees demonstrates what is possible when committed educators and school leaders create vibrant, welcoming and affirming school cultures where rich teaching and learning can flourish,” said Cardona. “I commend this school and all our Blue Ribbon honorees for working to keep students healthy and safe while meeting their academic, social, emotional and mental health needs. In the face of unprecedented circumstances, you found creative ways to engage, care for, protect and teach our children. Blue Ribbon Schools have so much to offer and can serve as a model for other schools and communities so that we can truly build back better.”

The Department invites National Blue Ribbon Schools nominations from the top education official in all states, the District of Columbia, Puerto Rico, the Virgin Islands, the Department of Defense Education Activity and the Bureau of Indian Education. Private schools are nominated by the Council for American Private Education.

Seton Catholic School was a dream put into action by a group of parents who wanted a solution to the limited options for a Catholic education in the Hudson area. They formed an exploratory committee in 1994 to determine the need and support for a Catholic school in Hudson.