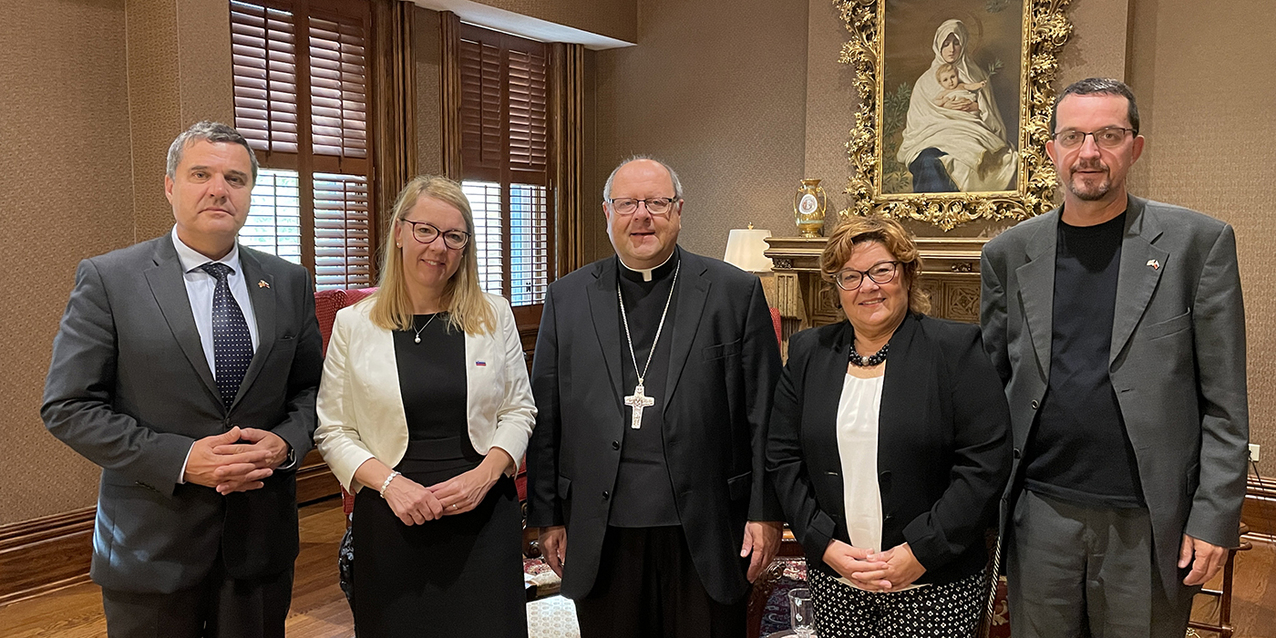 Helena Jaklitsch, Slovenian minister for Slovenians abroad, visited the Slovenian community in Cleveland last week. While here, she attended celebrations of the 30th anniversary of Slovenia becoming an independent nation and the presentation of Slovenia as the European Gastronomic Region 2021, as well as other events. The events were coordinated by the Slovenian Consulate General in Cleveland, headed by Alenka Jerak.

Jaklitsch met with Bishop Edward Malesic, who is of Slovene descent, on Sept. 18. Also attending were Tone Kajzer, Slovenian ambassador to the United States; Jerak, the consul general; and Zvone Zigon, the minister’s advisor from the Office for Slovenians Abroad.

“It is important to keep the culture and language alive,” Bishop Malesic told the delegation. He also told them the linden trees depicted in his coat of arms are a nod to his Slovenian heritage. 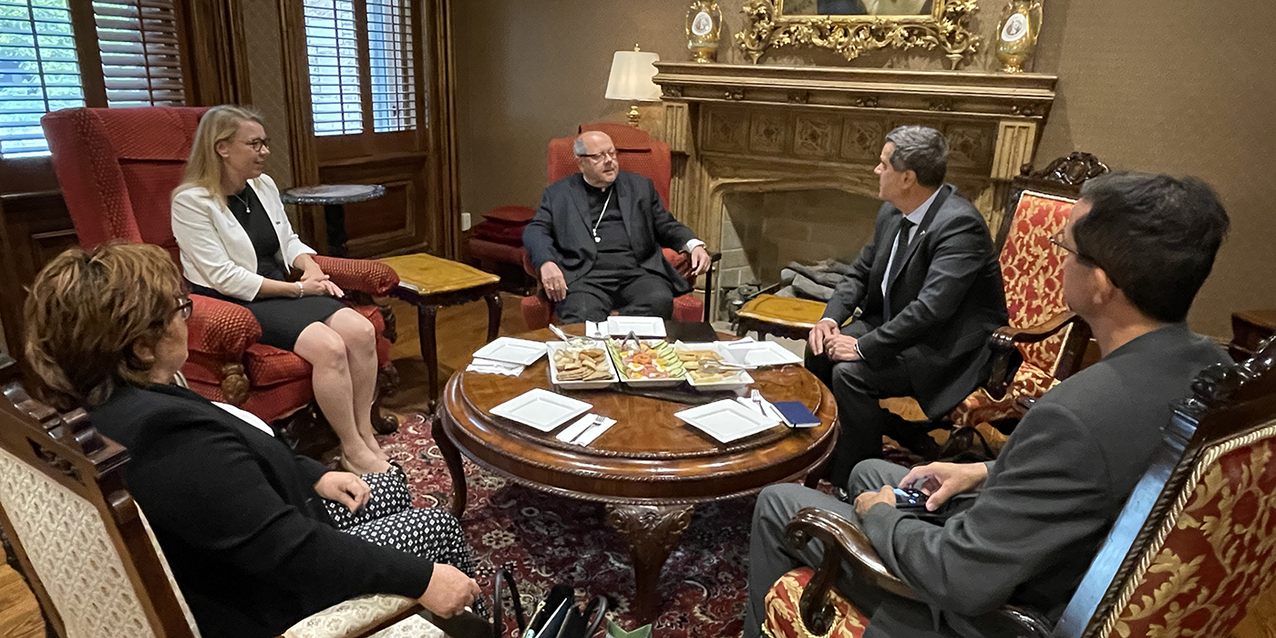 Jaklitsch expressed gratitude to the bishop for the recent appointment of Father John Retar as pastor of St. Vitus Parish, one of the predominately Slovenian parishes in the diocese. Father Retar is Slovenian and will continue celebrating Masses in Slovenian.

The bishop said he was planning to visit Slovenia this year, but said the pandemic forced cancelation of the trip. “I’m hoping to go next year,” he added.

The trip was planned by the United States Conference of Catholic Bishops. Bishop Malesic serves on the USCCB Subcommittee for the Church in Central and Eastern Europe.

Jaklitsch and the delegation discussed some of the places he might enjoy visiting when in Slovenia. She also invited him to visit her in Ljubljana. 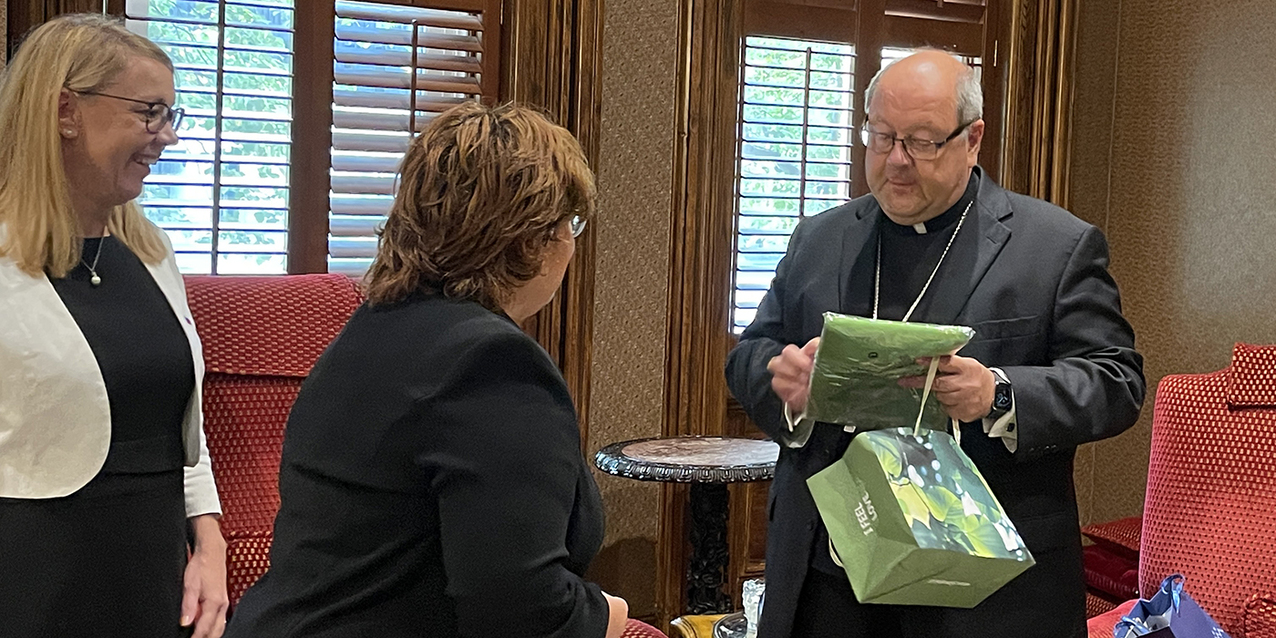 In addition, they exchanged views on the process of canonization for Venerable Frederic Baraga, a native of Slovenia, came to the United States in 1830 and served as a missionary among the Ottawa and Chippewa Indians in the Great Lakes region. He was named the first bishop of the Diocese of Sault Ste. Marie, but later moved the diocesan seat to Marquette, Michigan, which was in a better location. The name of the diocese also changed. Bishop Baraga served from 1853 until his death in 1868. Known as the “Snowshoe Priest,” he wrote seven Slovenian prayer books and authored 20 Native American books, including “Grammar and Dictionary of the Chippewa Language,” which is still used. He was the first bishop to write a pastoral letter in both the English and Chippewa languages.

Bishop Baraga’s cause for canonization has been ongoing for more than 60 years.

The group also discussed areas of the country with large Slovenian populations. 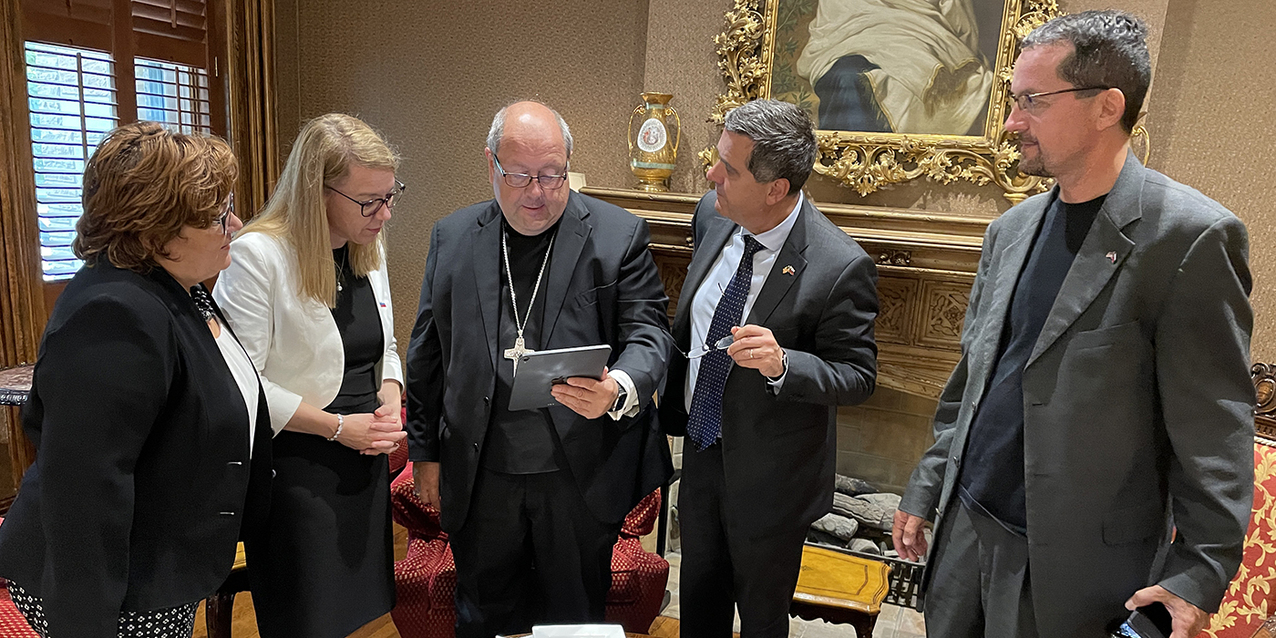 Using his iPad, the bishop showed the group a picture of his grandfather, who worked in the steel mills in Pennsylvania. His grandfather had been badly injured in a work accident, losing one hand and nearly losing his legs. “But I can still see him using his hook to pull the chicken from the oven,” he said.

Before leaving, the group posed for photos and gave the bishop some gifts from Slovenia.

Jerak said there are three things they’d like the bishop to do: visit Lamont, Illinois and Marquette Michigan, which have strong Slovenian communities, and to visit Slovenia.