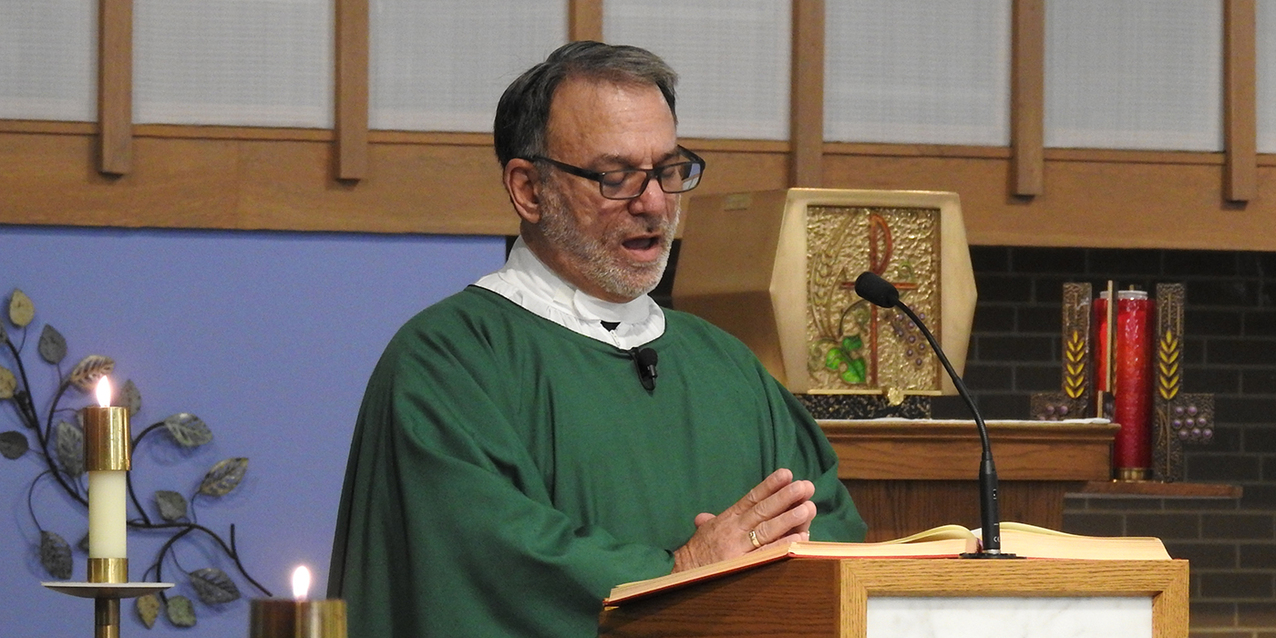 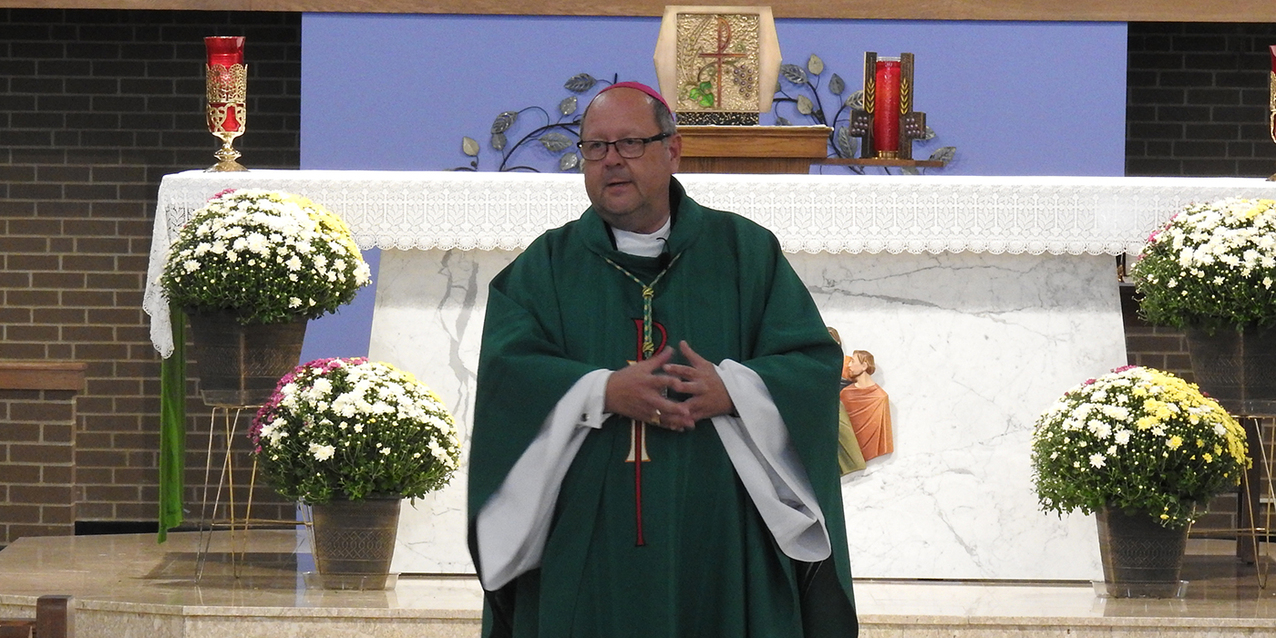 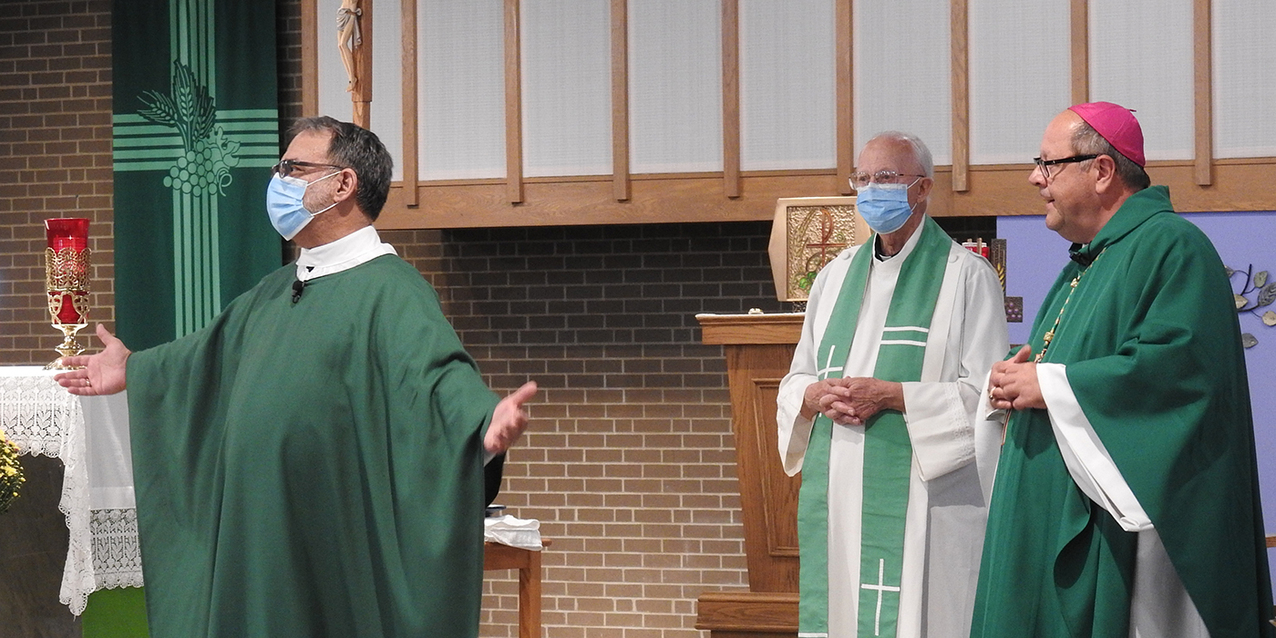 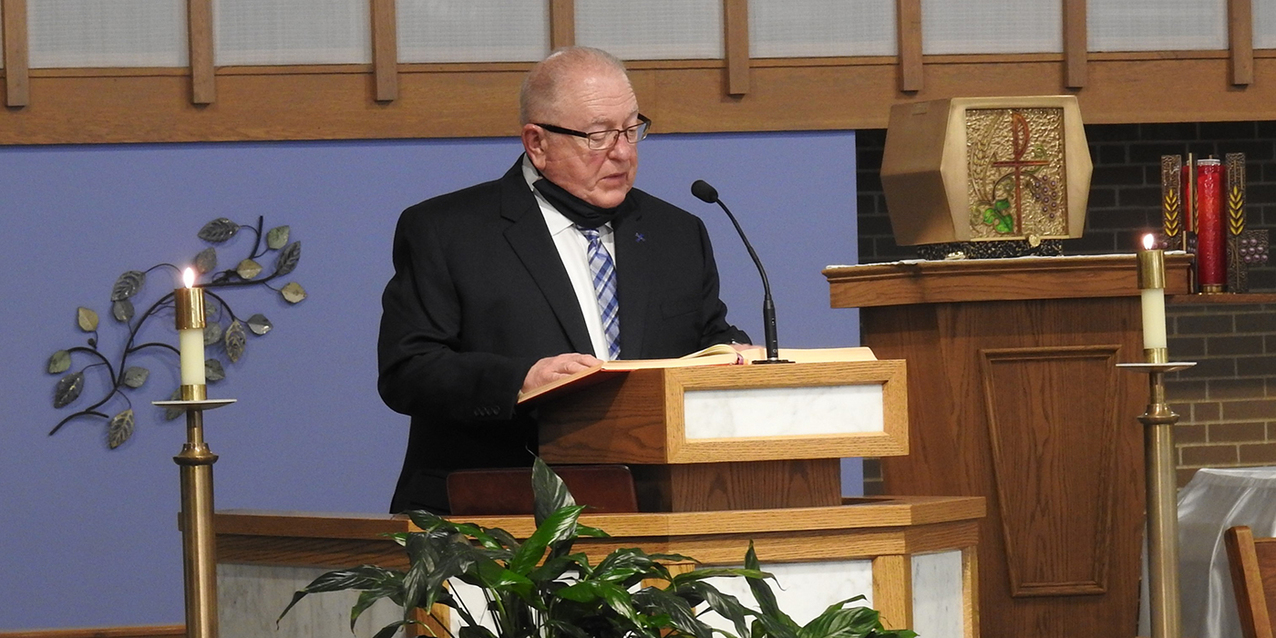 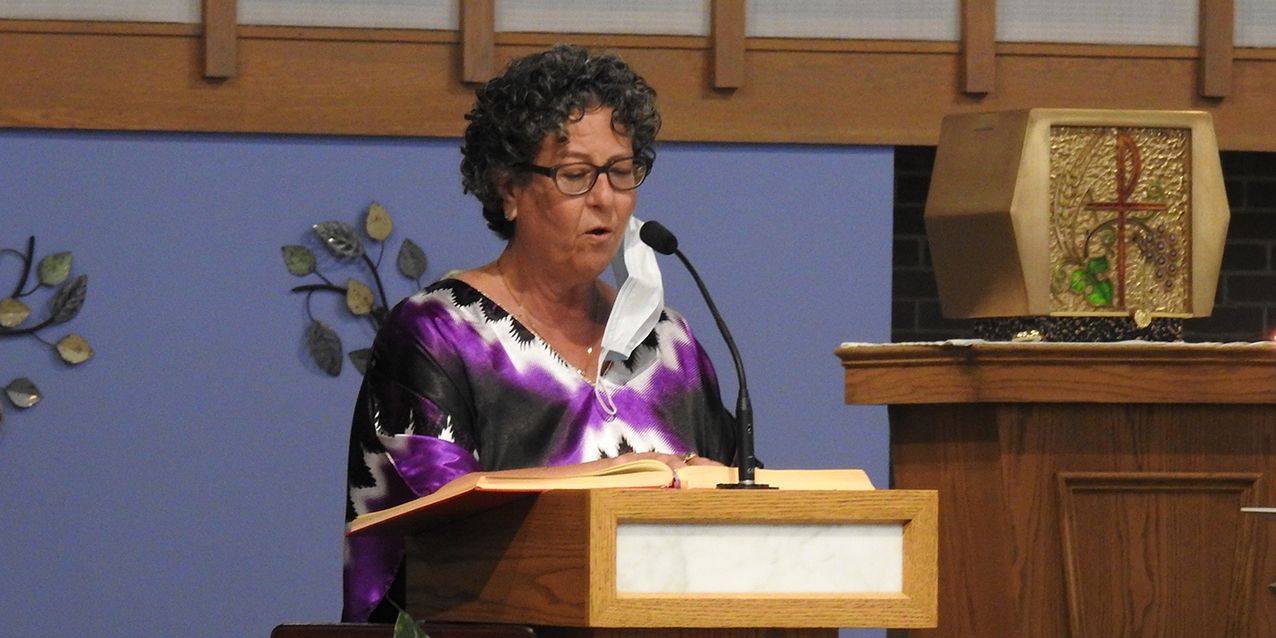 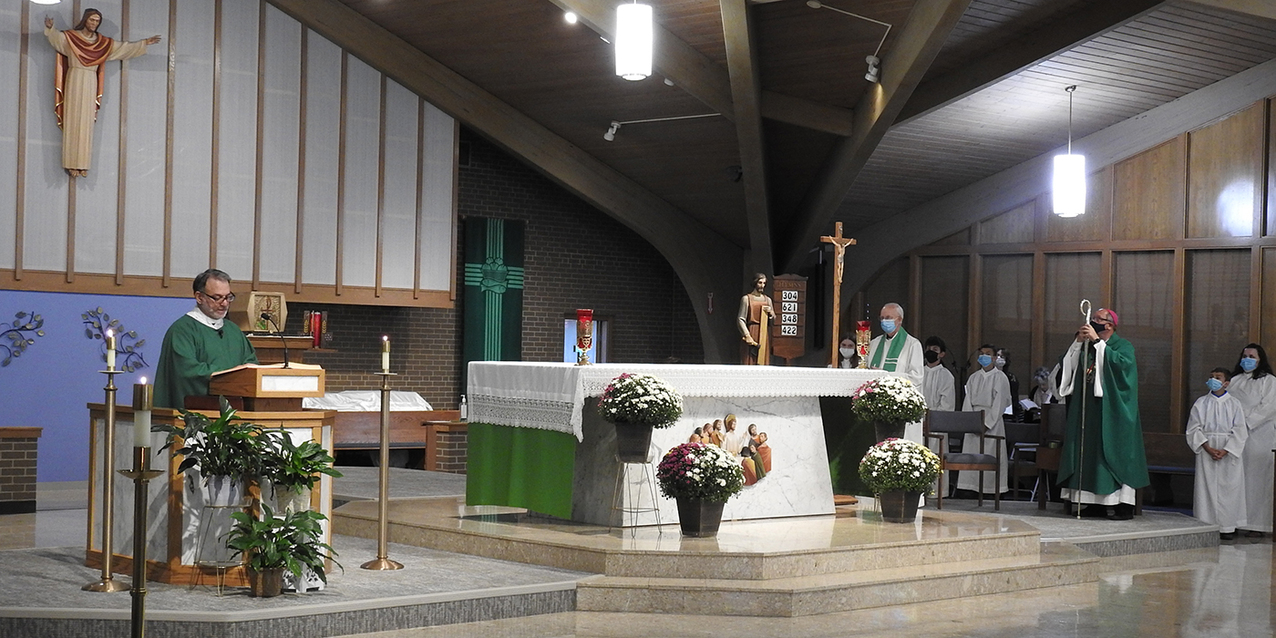 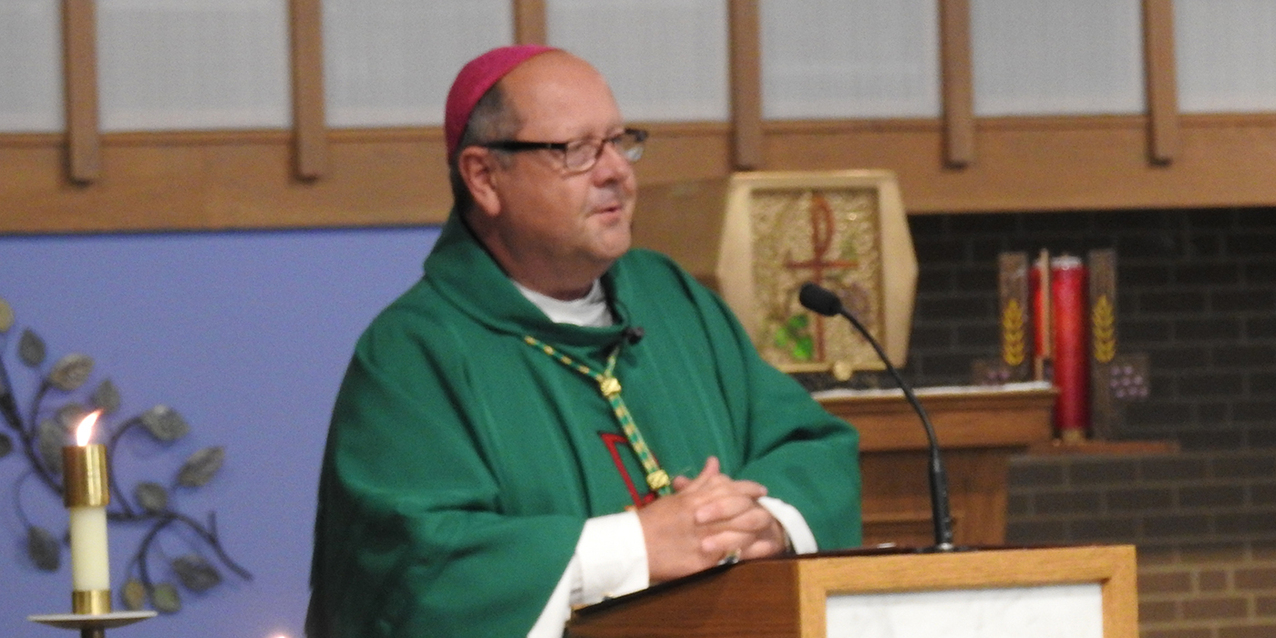 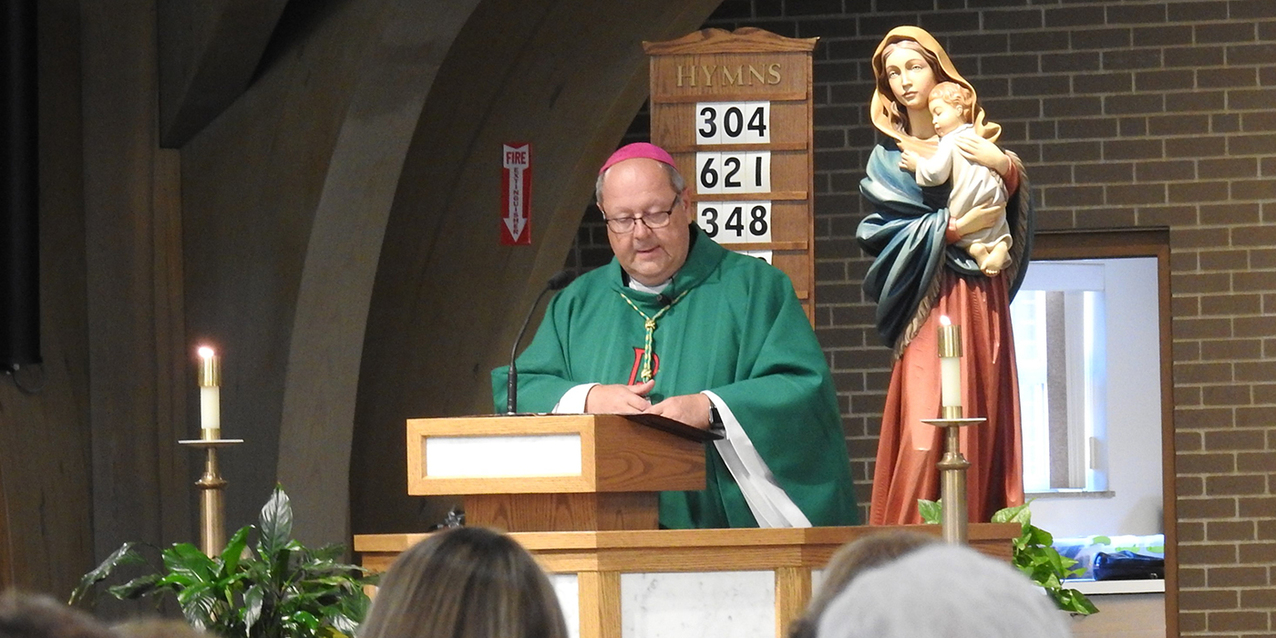 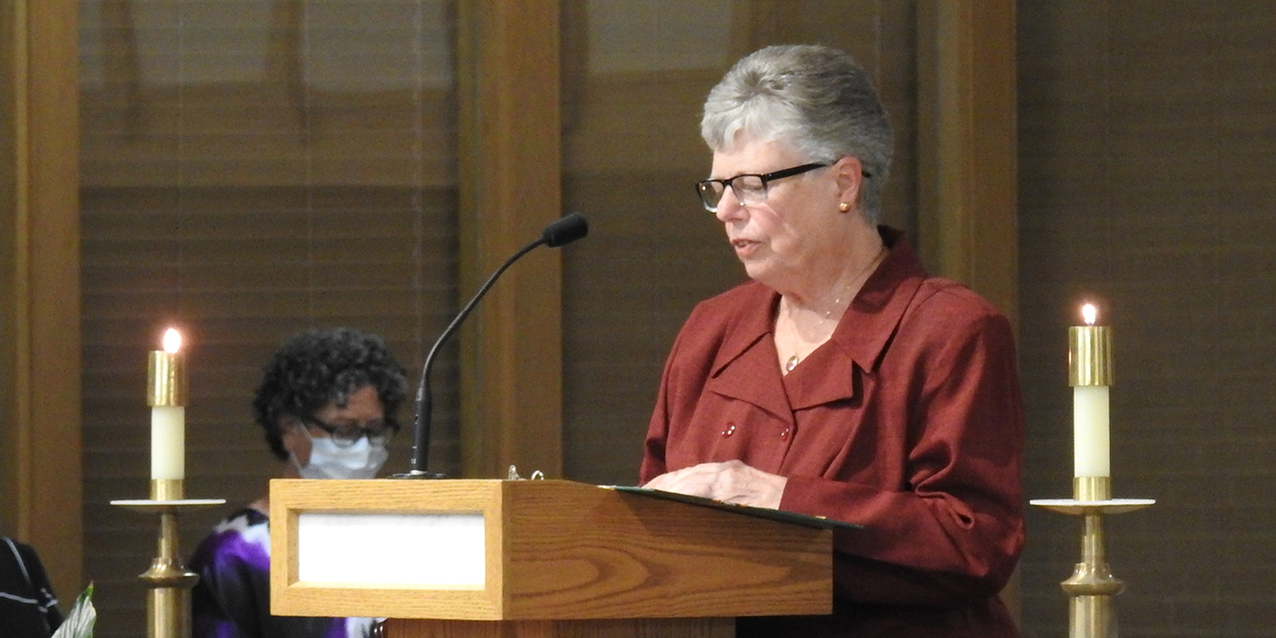 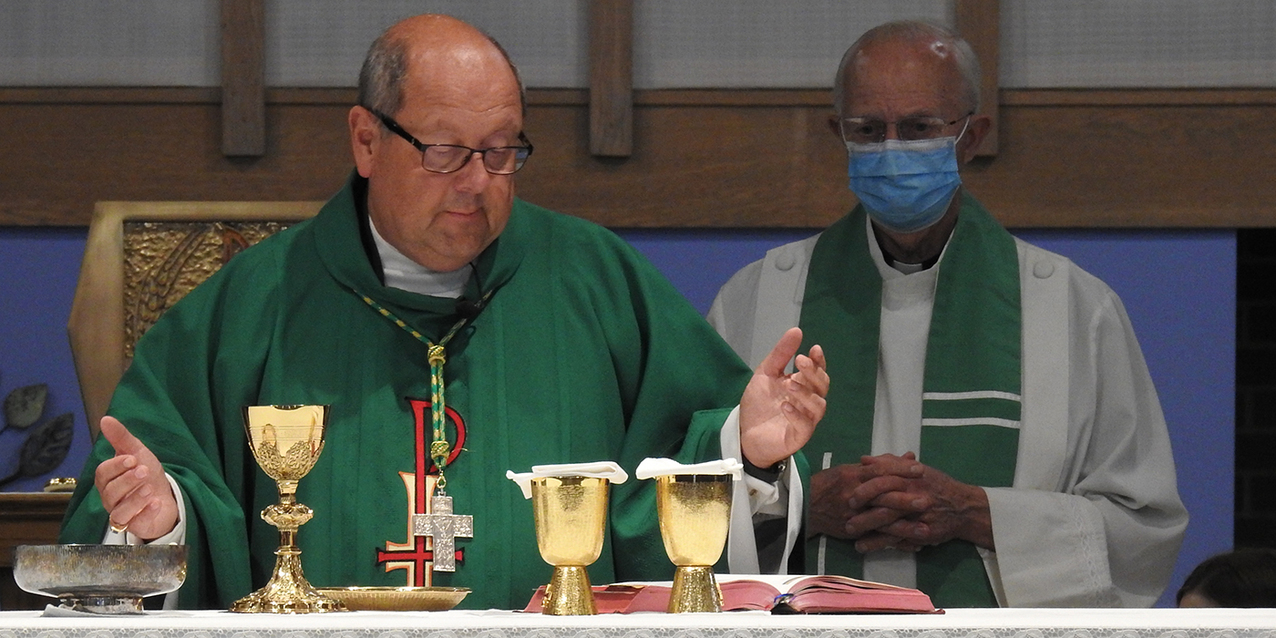 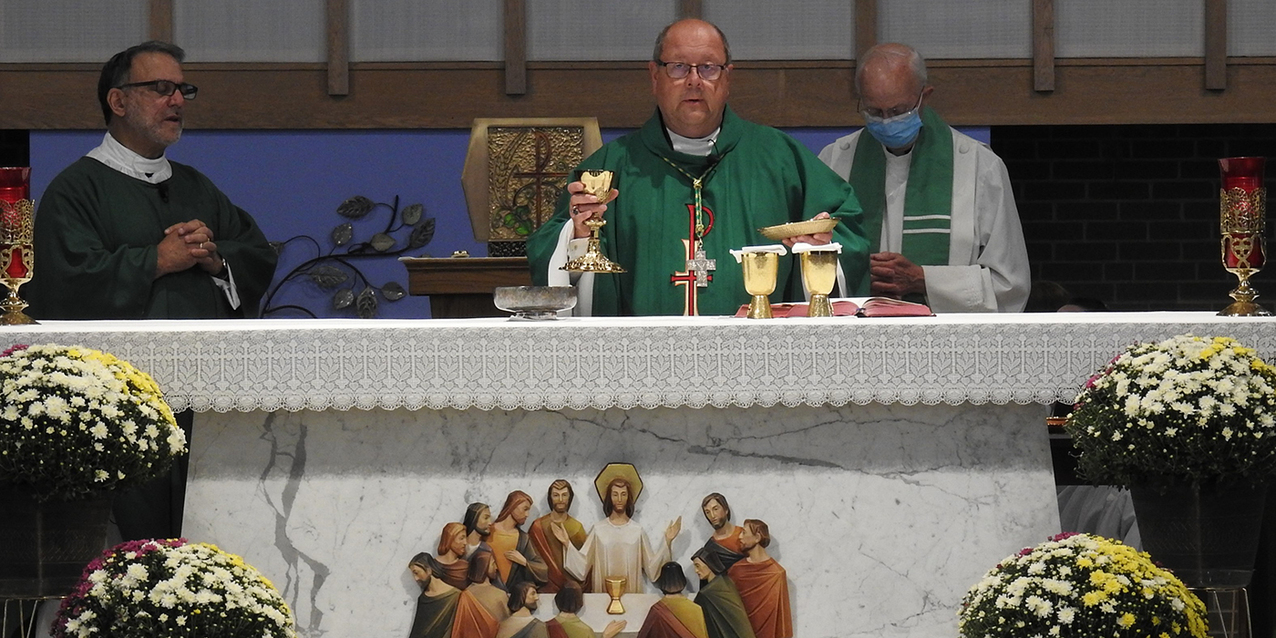 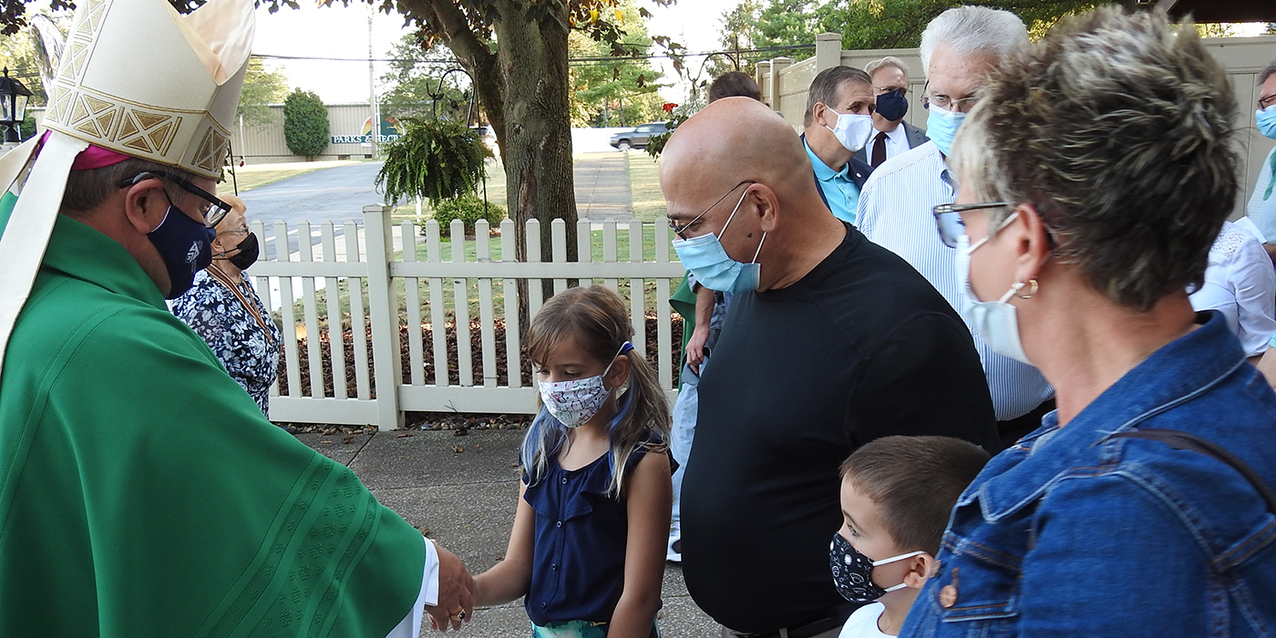 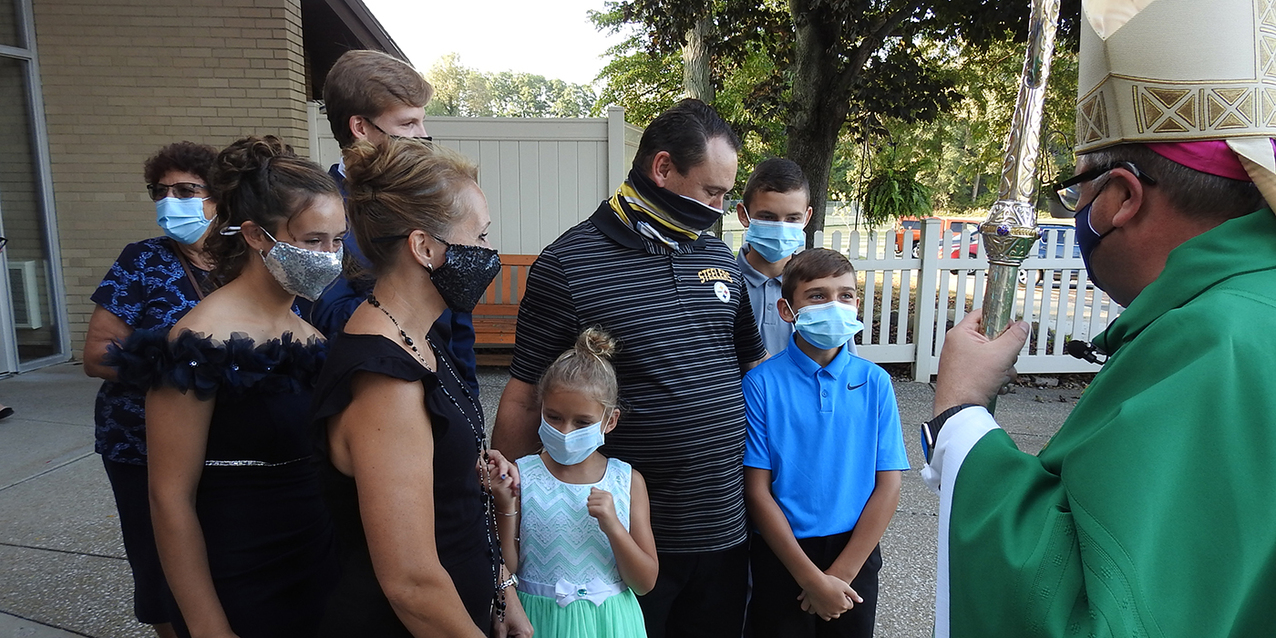 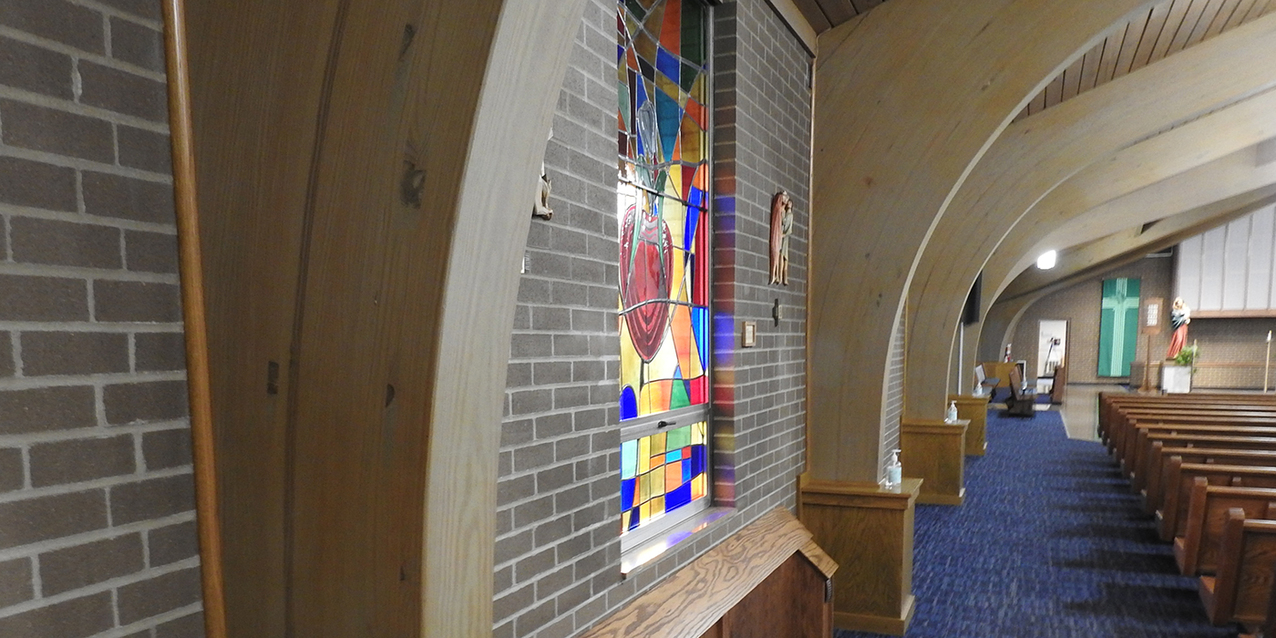 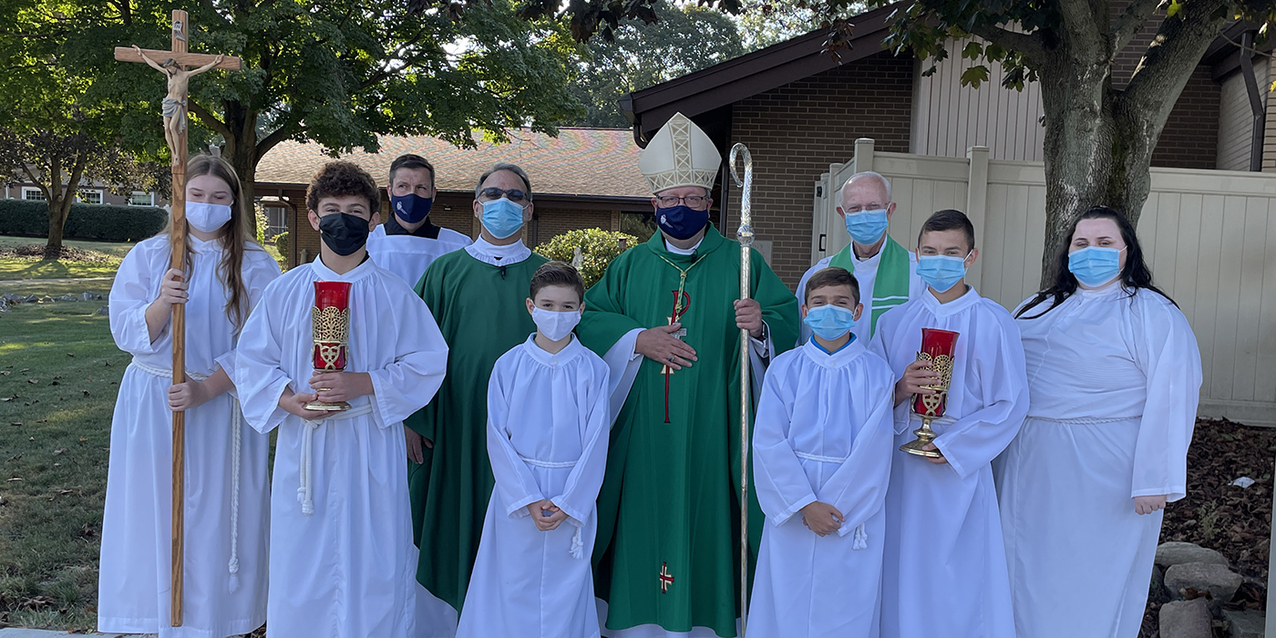 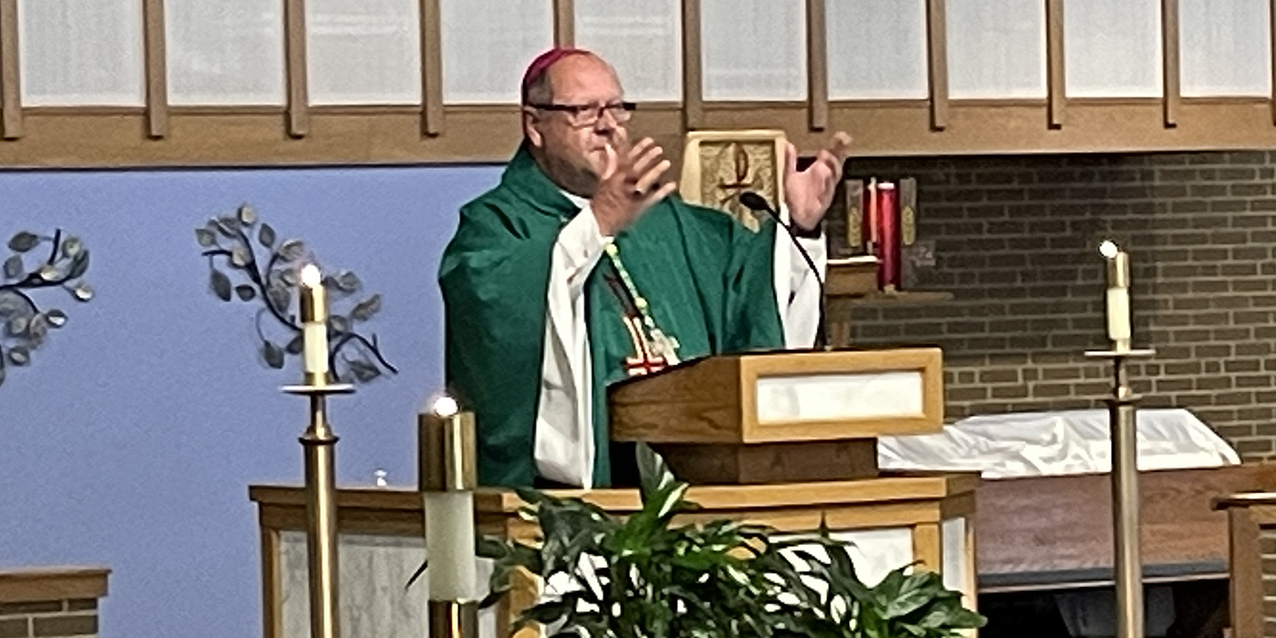 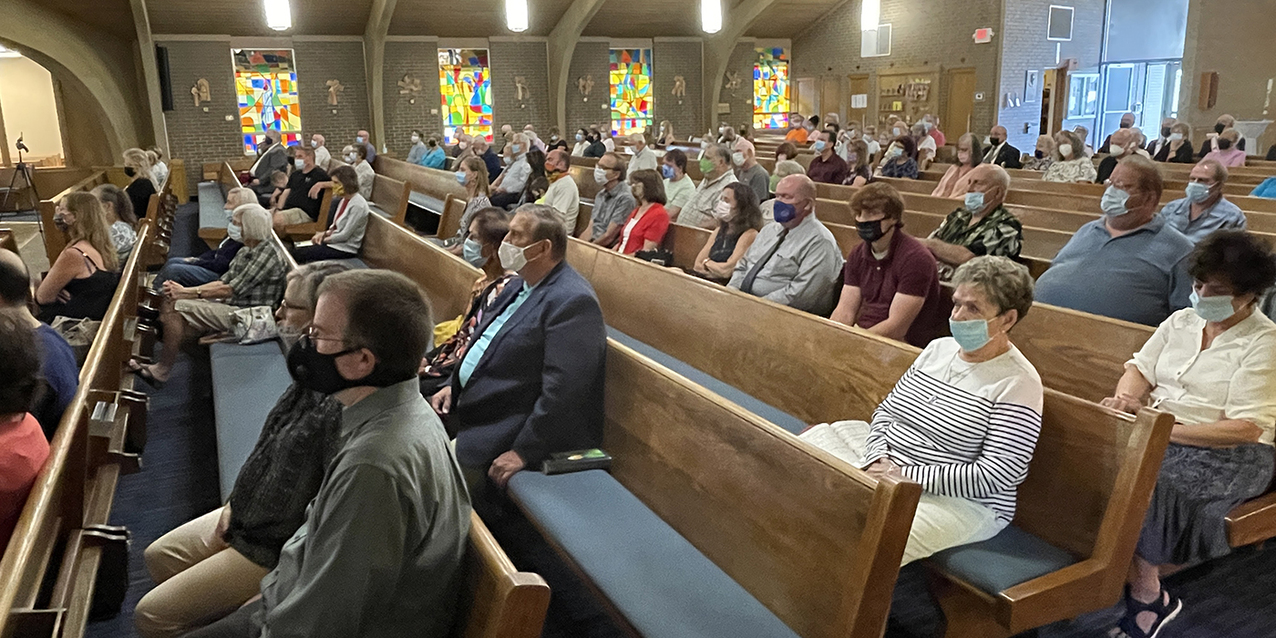 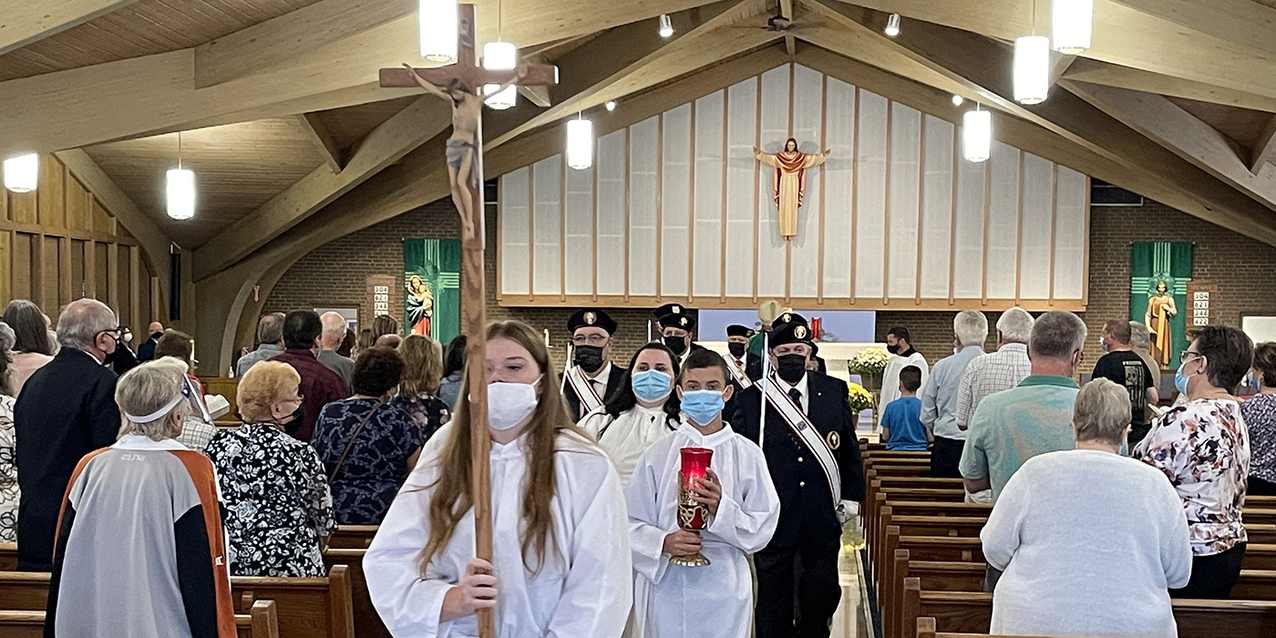 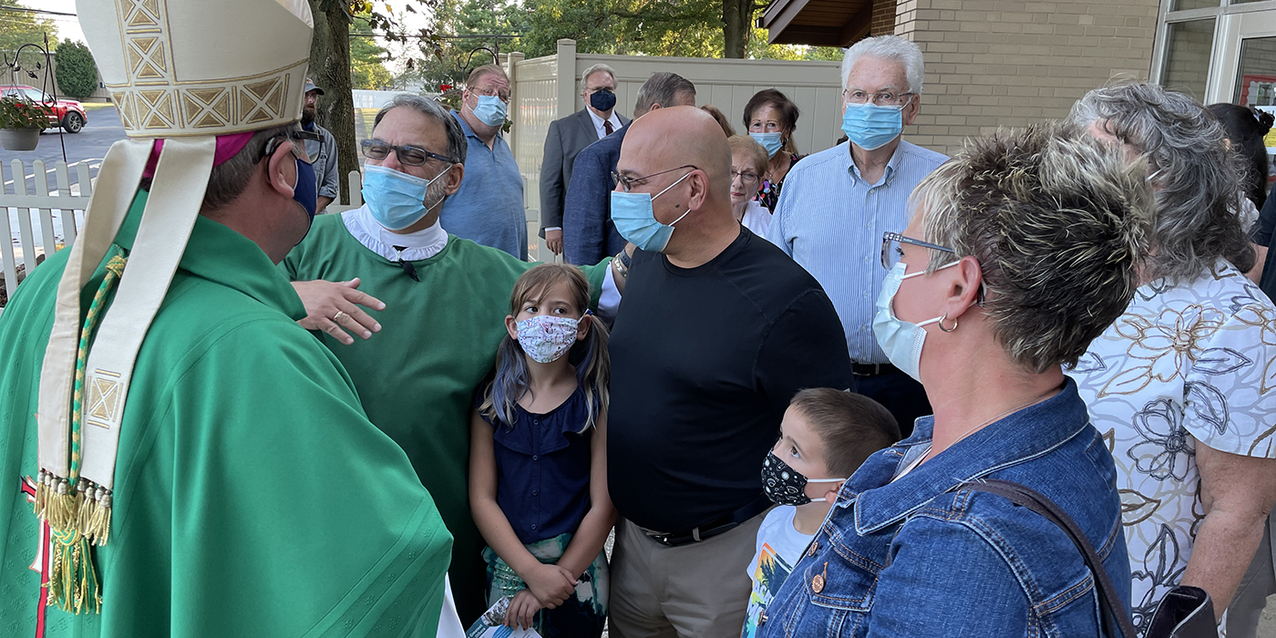 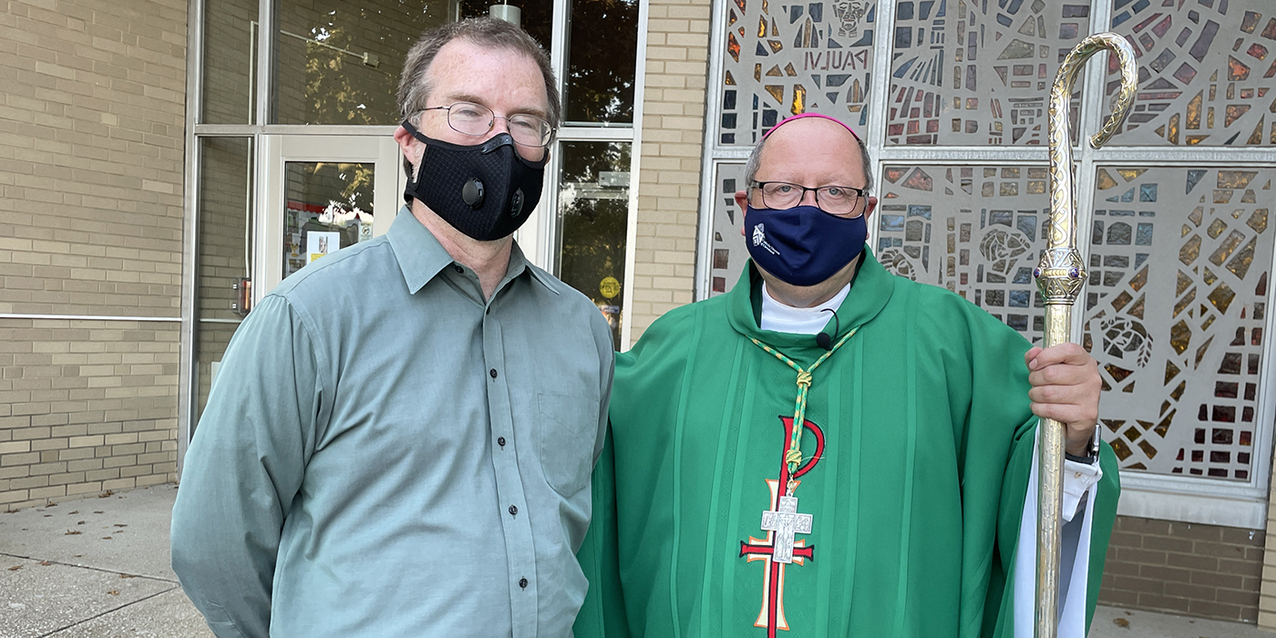 Father Pete Colletti said what began as some improvements to St. Eugene Church in Cuyahoga Falls turned into a major project that involved repairs to ensure the structural integrity of the building.

With the work completed, the parish decided to celebrate with a Mass of Thanksgiving on Sept. 18 and invited Bishop Edward Malesic to be the presider.

“It is good to celebrate the completion of the repairs and restoration to the church,” the bishop said. “It looks to be in good order and so do you,” he added.

Father Colletti said the tabernacle was moved from its previous location on the side to the center of the church behind the altar. New carpeting was installed and the marble was polished. But the “surprise” that caused more extensive repairs was the discovery that the pillars supporting the church were in poor condition and needed immediate attention. Father Colletti said an architect in the parish volunteered his services and they discovered that the pillars were rotting and had damage from termites.

“This church was not going to fall down on my watch,” Father Colletti said.

As a result, the church was jacked up and supported while the damaged parts of the pillars were cut off, replaced and anchored in cement to ensure structural integrity. The work was “hidden” by building table-like structures around the bottom sections of the pillars. One parishioner noted they provide a perfect place for the church’s hand sanitizer stations.

“You know, a church building is a symbol of the spiritual Church – us,” Bishop Malesic said. “So we must repair and restore our buildings, we must also constantly repair and continuously restore the living stones of the Church that is made up of believers.”

He said St. Francis heard that call when God asked him to “rebuild my Church.” Except St. Francis originally thought God wanted him to restore the Church of San Damiano, which was collapsing. Eventually, he realized that God wanted him to rebuild the people of God through prayer, poverty and peace. “He wants to build all of us up – over and over again, generation and generation,” the bishop said.

We have some housekeeping to do, he added, explaining we must “return to our Gospel roots, hear the all of Jesus over and over again, celebrate the sacraments that he gave to us with greater joy, proclaim his resurrection with greater fervor and be a Church that serves, invites and teaches what Jesus revealed to us.”

Also, the bishop said we must be a Church that looks like Jesus, which means constantly maintaining our souls, “Fixing in ourselves what needs to be fixed, polishing in us what has become dulled by time and remembering that we have good bones – we are a Church that was built by Christ himself on the faith of Peter, who said, ‘You are the Christ, the Son of the living God.’”

Even though the Church can be shaken up at times with various scandals and divisions, it still is the Church that Jesus built on rock-solid stone, Bishop Malesic said. “So yes, once again, we submit ourselves to the school of the Holy Spirit and ask the Lord, ‘What would you have us do for you, Lord? Teach us.’”

That’s what Jesus was referring to in the day’s Gospel, he said. Jesus took his closest disciples apart because he wanted their full attention as his days on earth were nearing an end. He told them the Son of Man would be killed and would rise from the dead three days later, but they were afraid to question him. “The truth is sometimes hard to accept and so we run from the truth,” the bishop said.

“But at the heart of the truth about Jesus is that he was the Christ, the Messiah, the Savior. He died. He rose. He will come back,” he added.

“IF we are ever put in a situation where we must explain our faith in three simple sentences, that comes pretty close to the fullness of our faith. Our Savior died for us. Our Savior rose from the grave. And Christ will come again for us. The central symbol of that faith is the life-giving cross of Christ. That’s why we embrace the cross of Christ and lift it up for all to see.”

The second lesson Jesus was teaching was about rank and authority in the kingdom of God. It was prompted by the disciples’ discussion of which of them was the greatest. When Jesus asked what they were talking about, they fell into an embarrassed silence, the bishop said. “But of course, Jesus knew they were talking out of pride and power.”

He said Jesus upended their thinking. “It is not the powerful who are important in the kingdom, but the weak. It is not those who give the most, but those who need the most. IT is not the wise and the clever, but the simple and the pure. In short, Jesus calls a child to himself and says, ‘Here is the most important person in the Kingdom of God. If you serve this child, you will make yourself great.’”

St. Paul delivered the same message to the Philippians, the bishop said, telling them to do nothing out of selfishness or vainglory. Instead, they should humbly regard others as more important than themselves.

“Isn’t that the story of Jesus himself, who was God, but emptied himself of his divinity so that he could come to us and save us. God comes to us in our poverty and God asks us to be like him, to be servants. That is the Gospel way,” Bishop Malesic said.

He noted that children need others to feed and care for them, which represents the poor, the unwanted, the needy and nameless in the world. “There are many children of God who are waiting to be served,” the bishop said, which is why Christians have built hospitals, homeless shelters, food banks and helped those suffering from addiction. “The world criticizes us for it sometimes, but make no mistake: Jesus commands it of us – to care for the least among us.”

As the new catechetical year begins, the bishop also said we must teach the children about Jesus because they will be saved only by coming to faith in him.

Worldly power is one of the most dangerous and lethal forces in life, he said. “We reject seeking worldly power for its own sake. We seek a different power – that power that comes to us from above.” He said that power from above is found when we help the person God sends our way who needs it the most. “That is love and it comes to us first from God. It is the love that God wants us to share.”