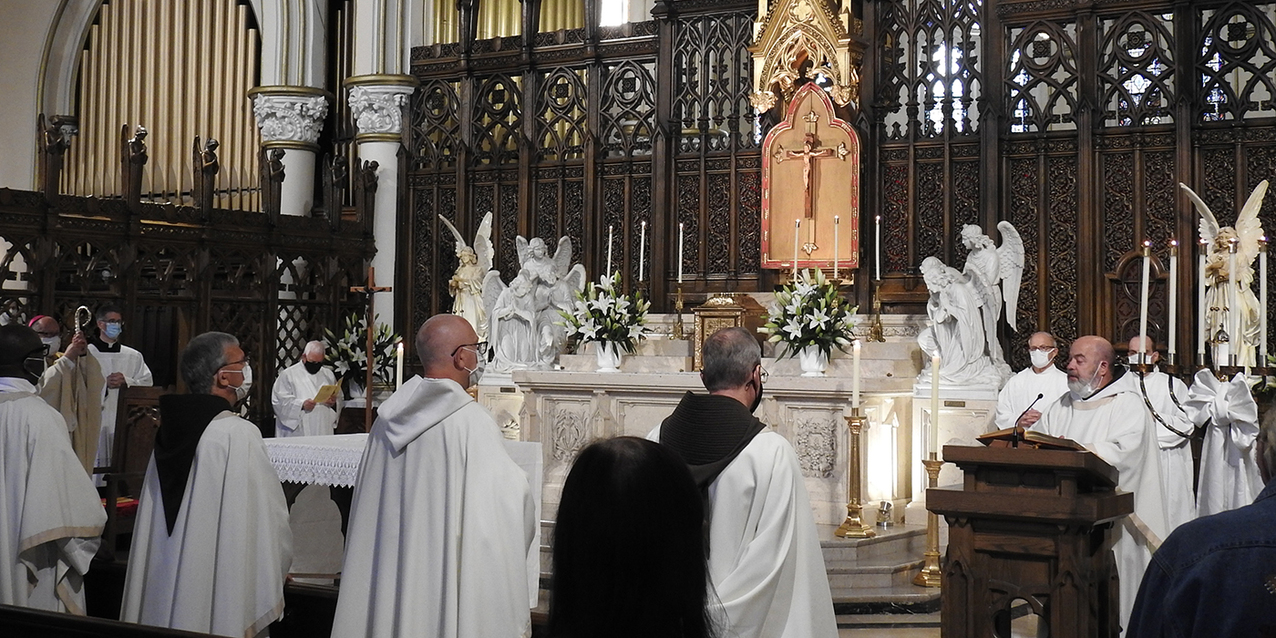 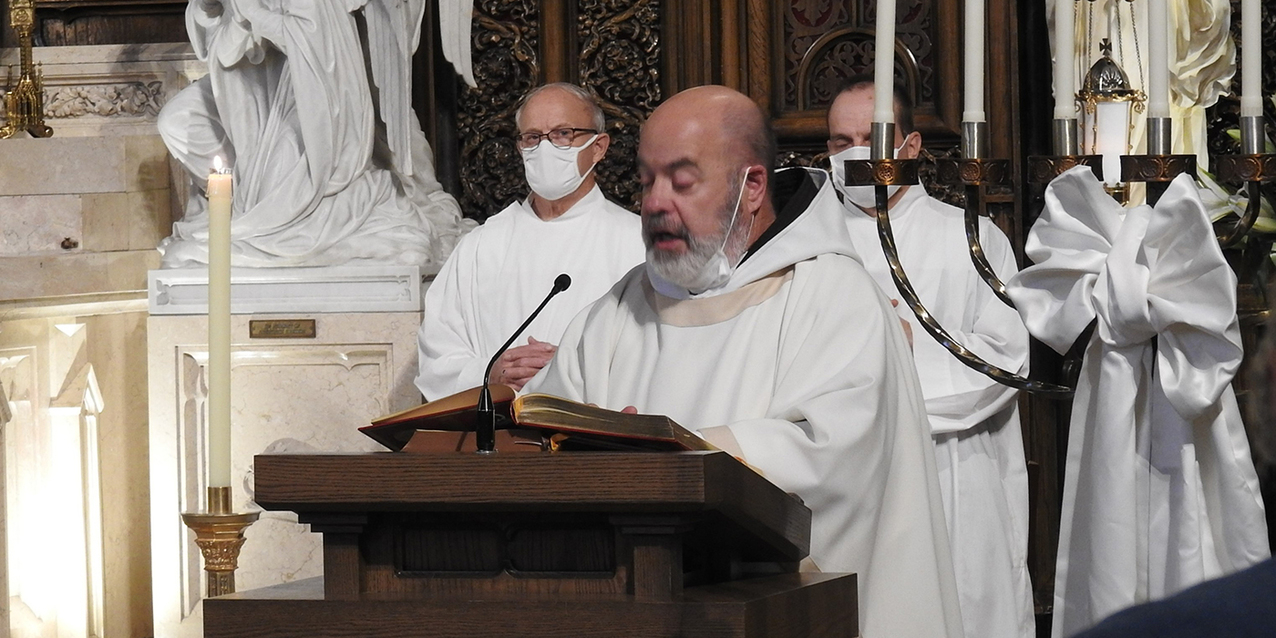 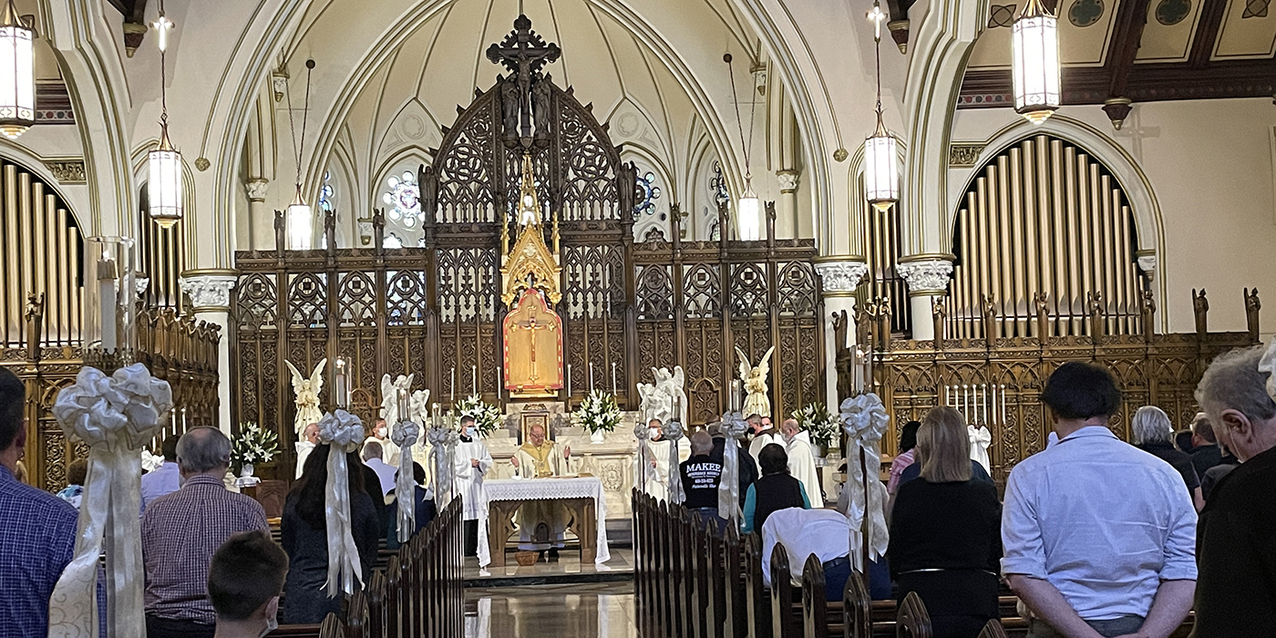 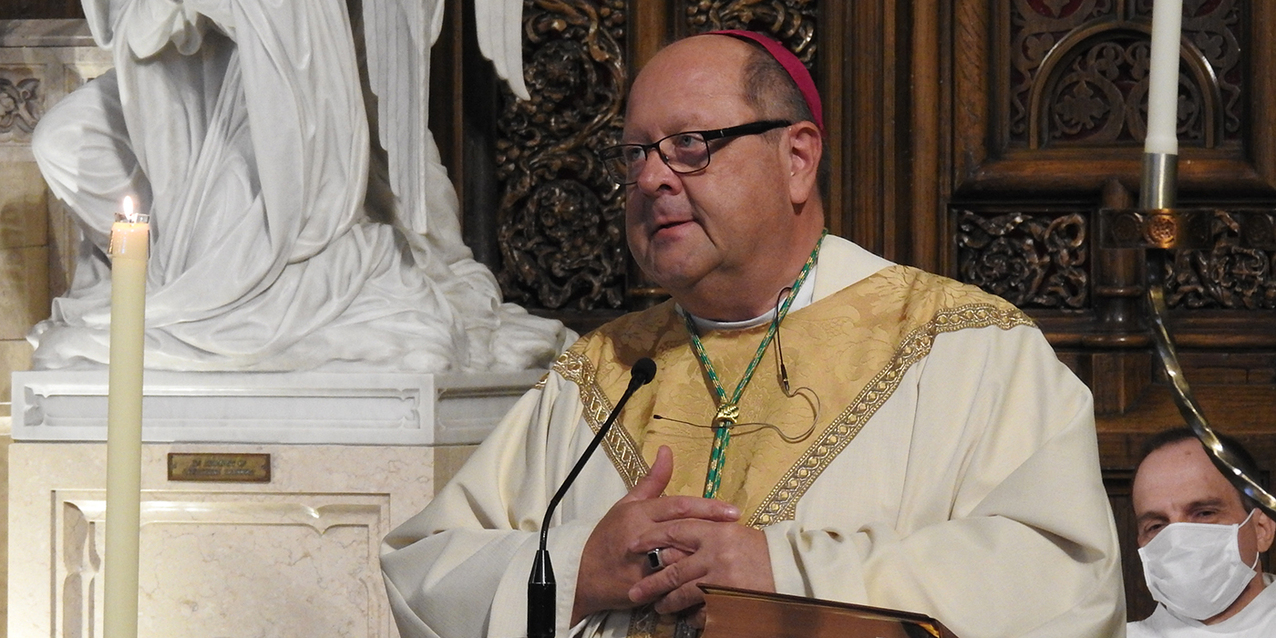 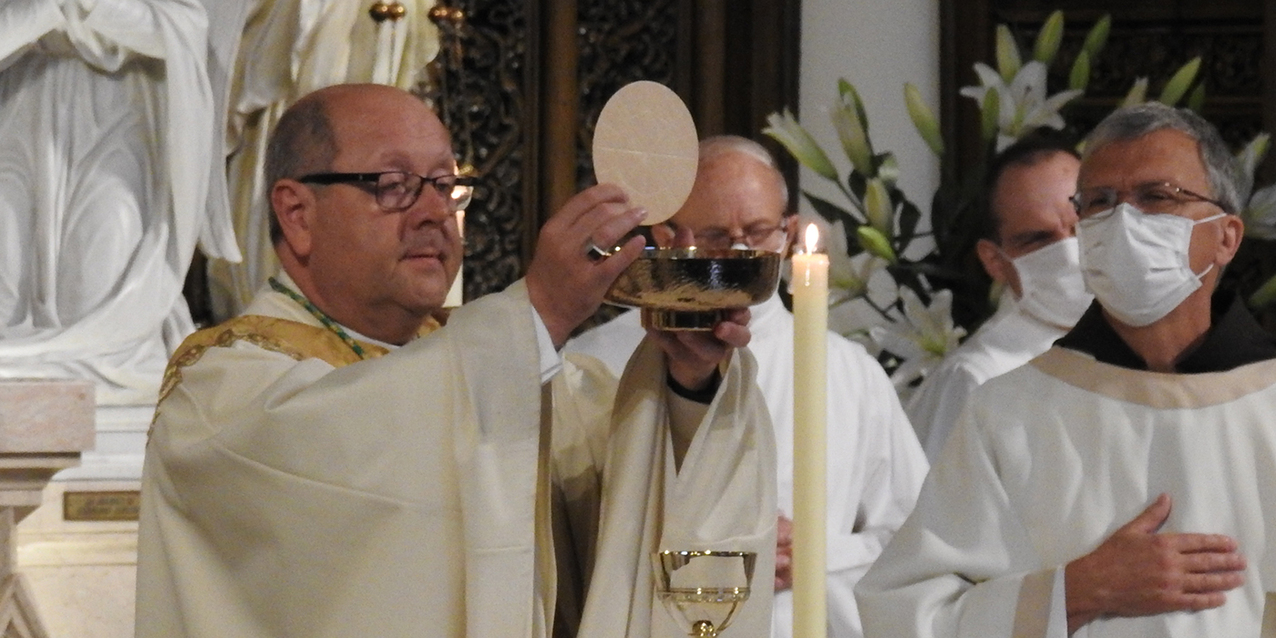 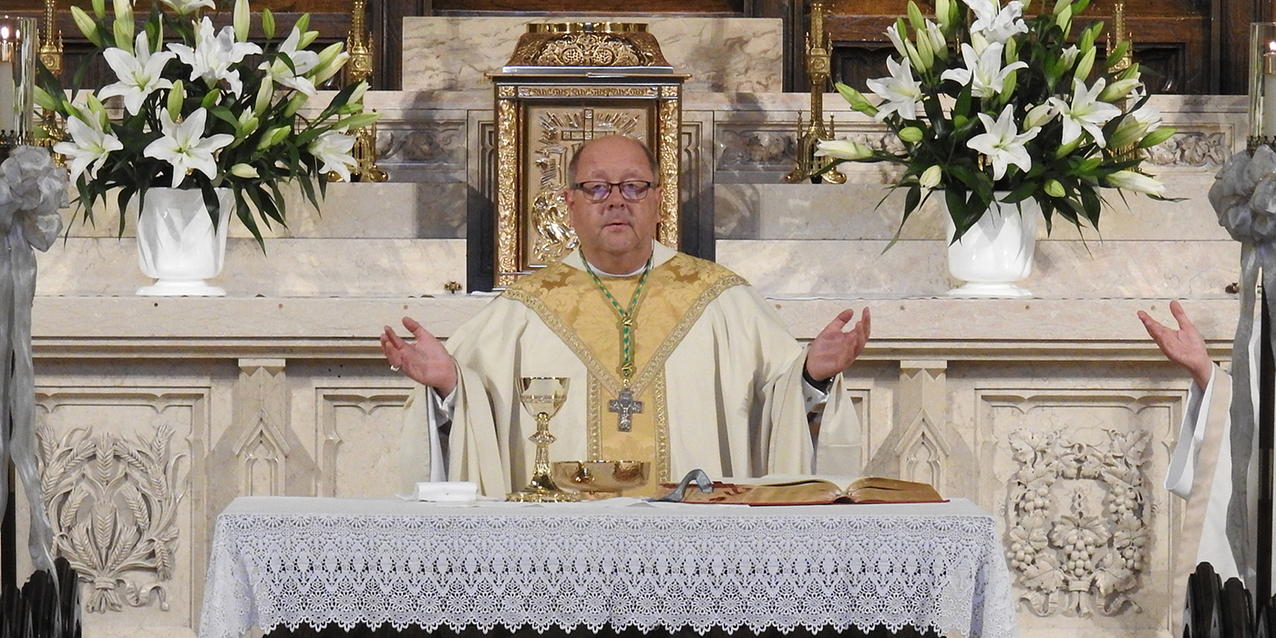 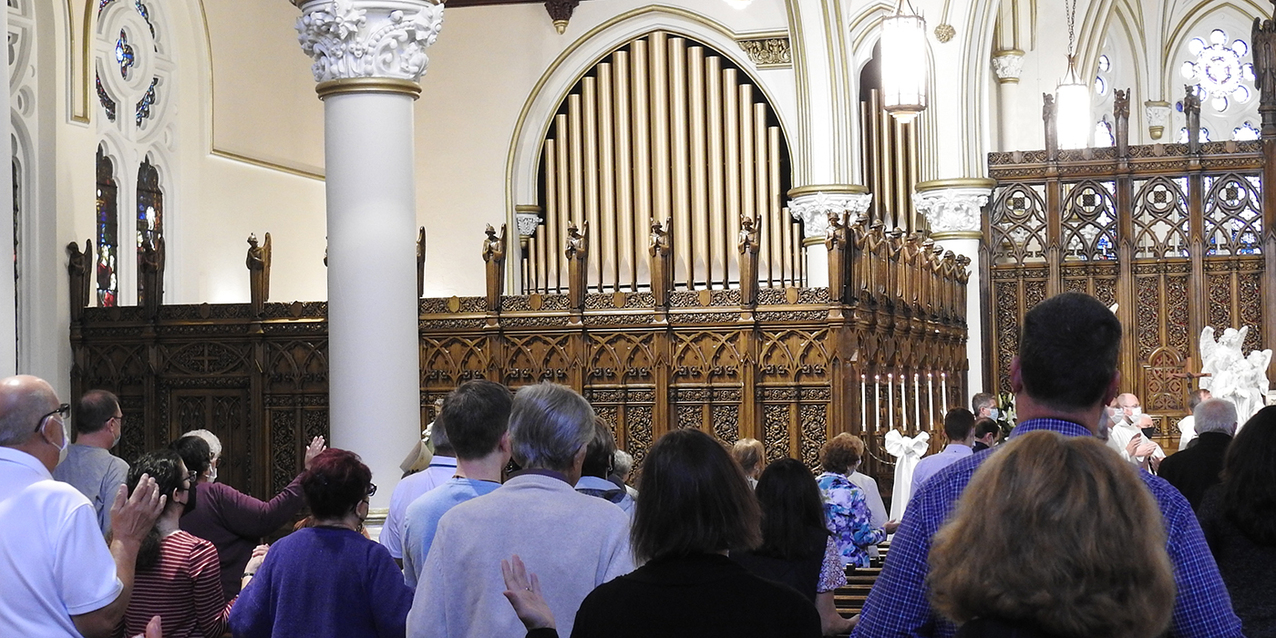 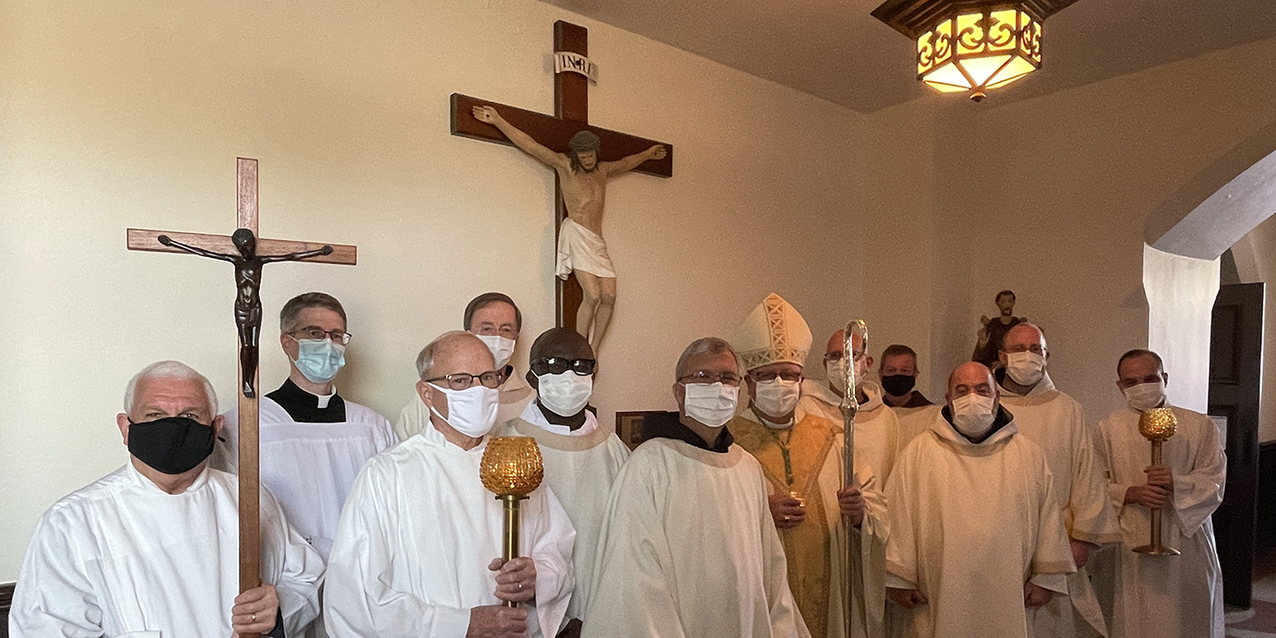 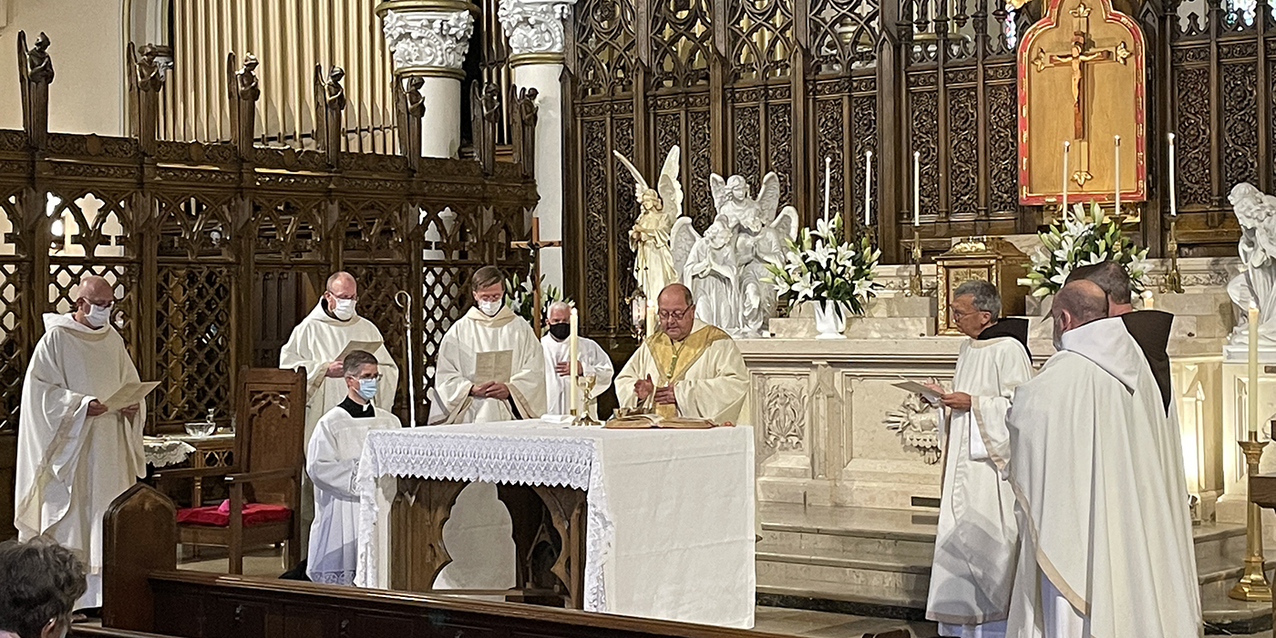 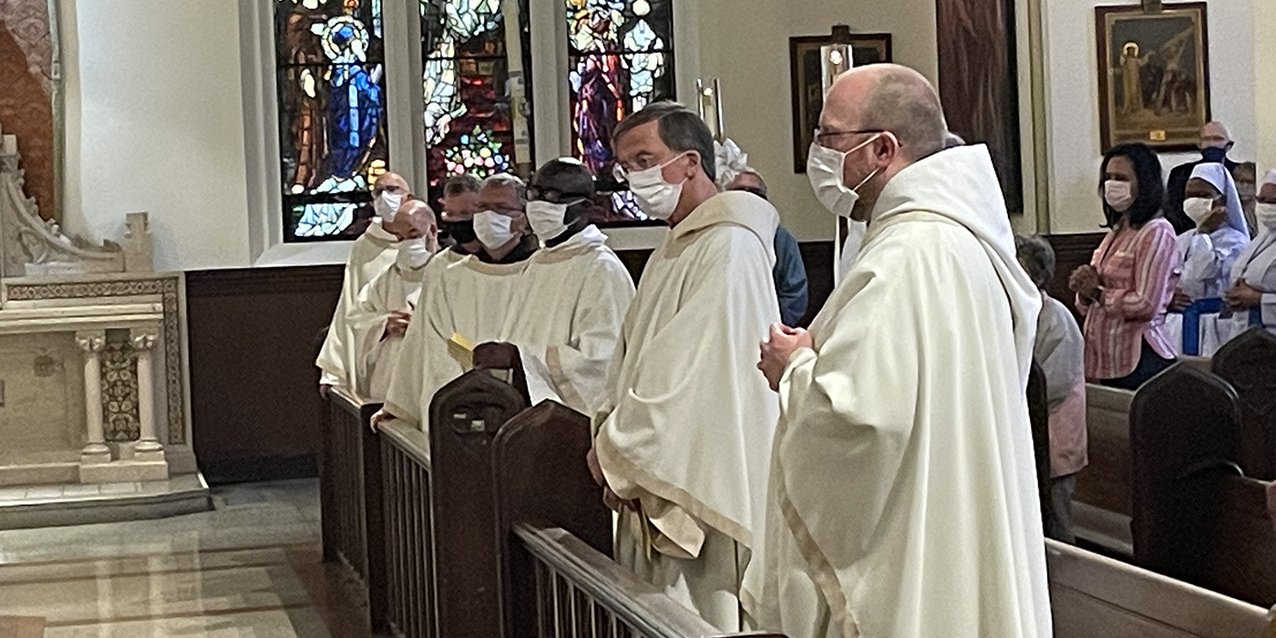 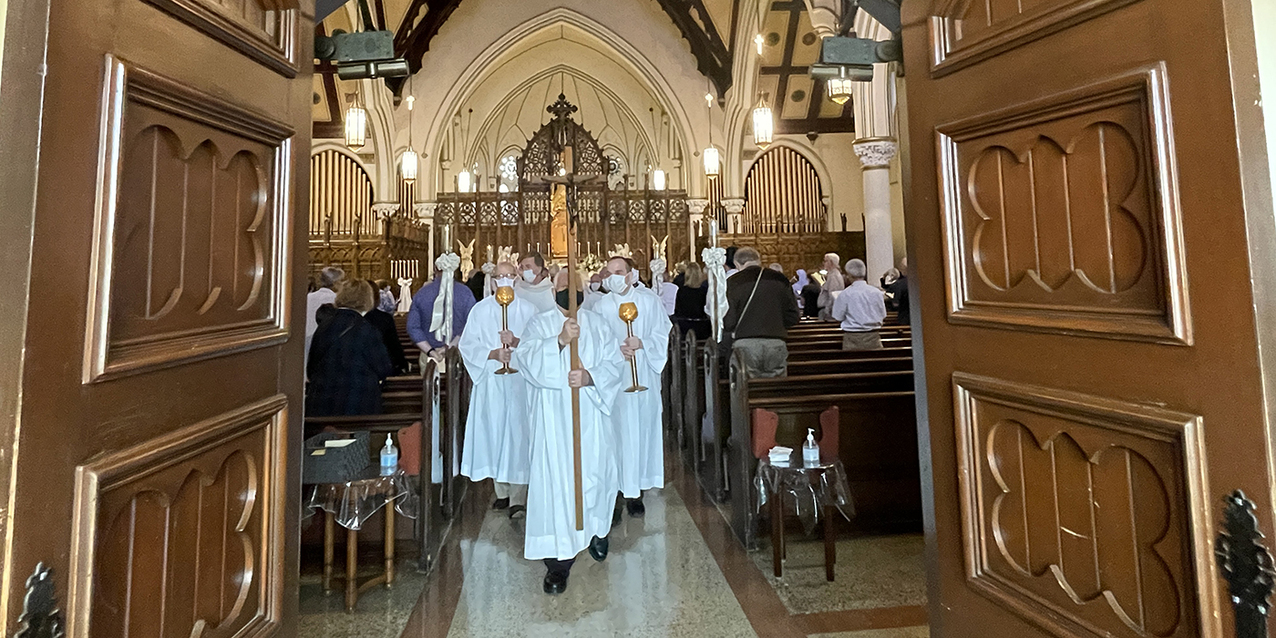 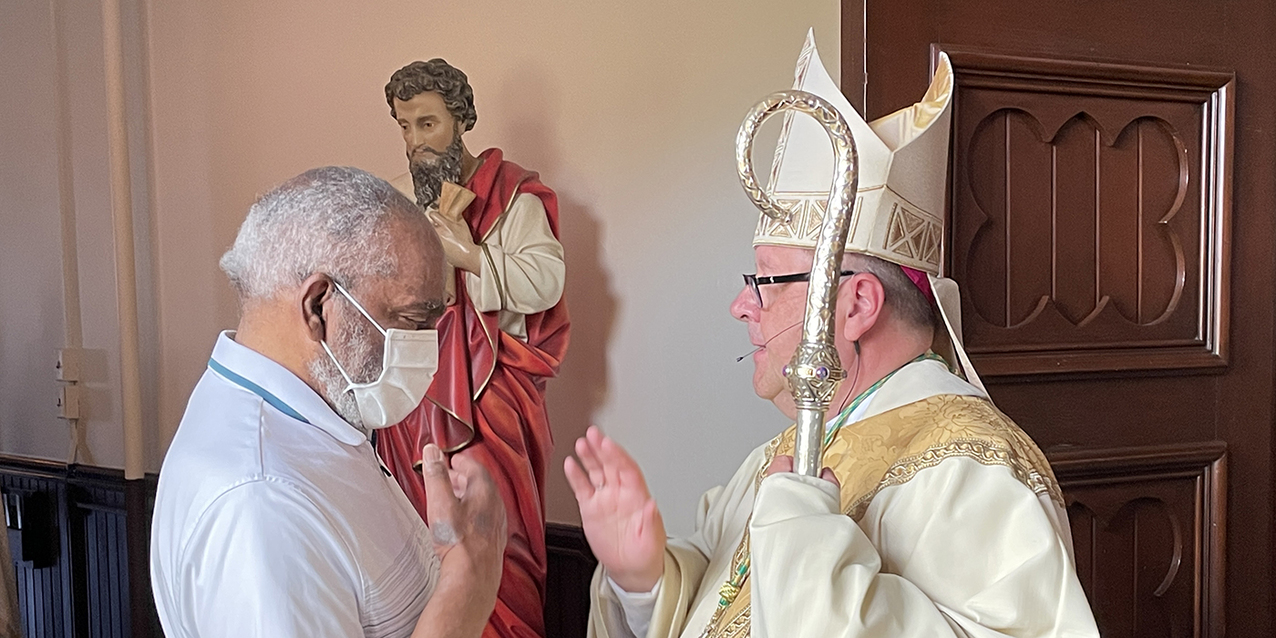 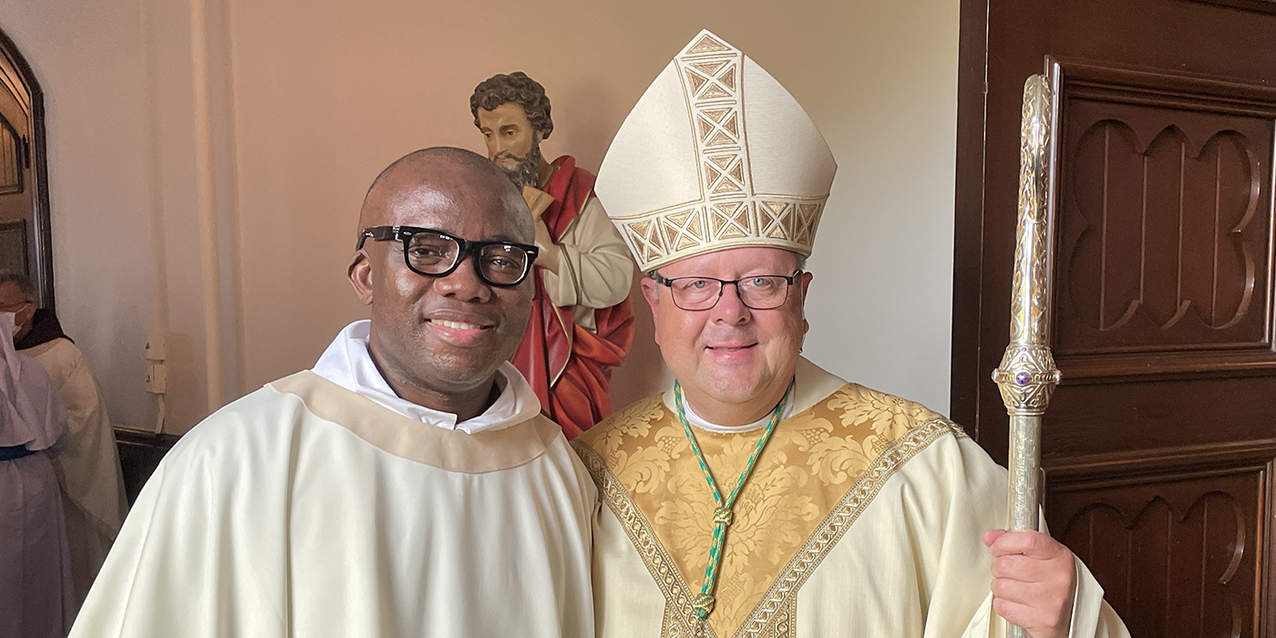 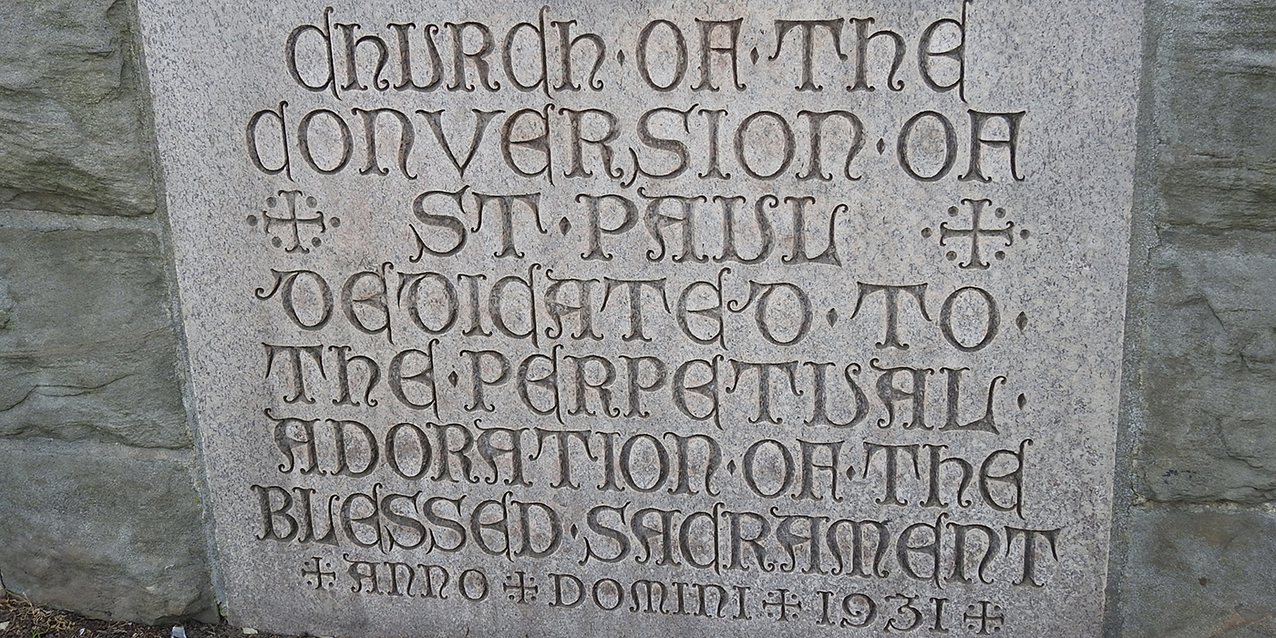 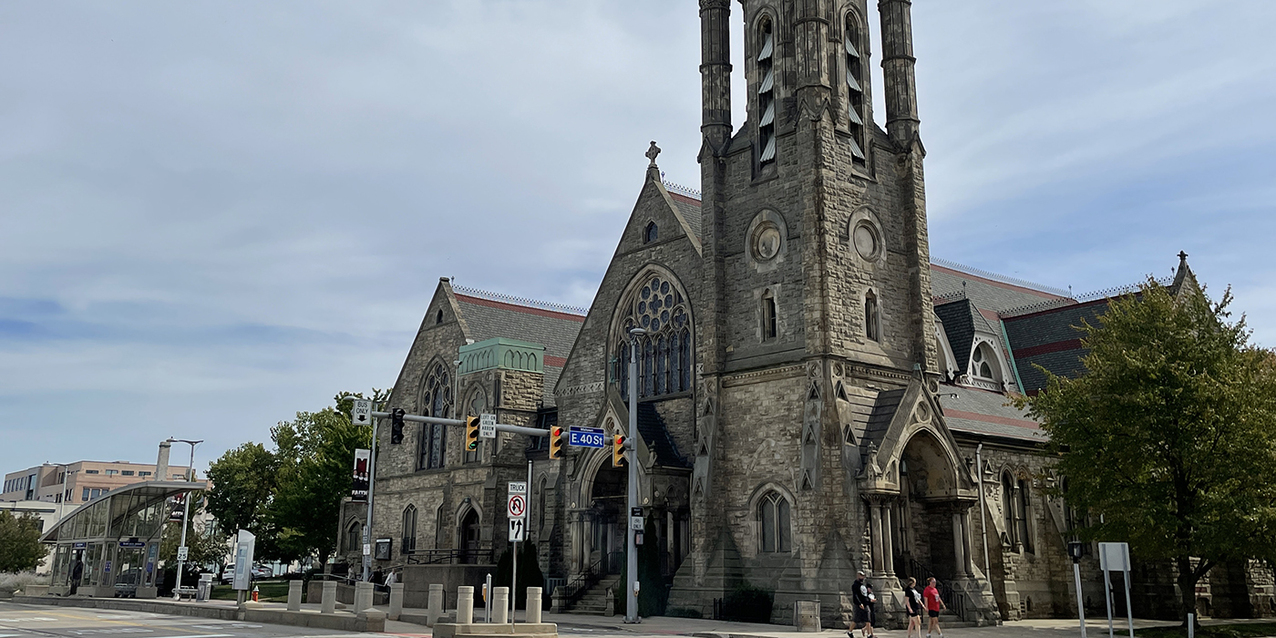 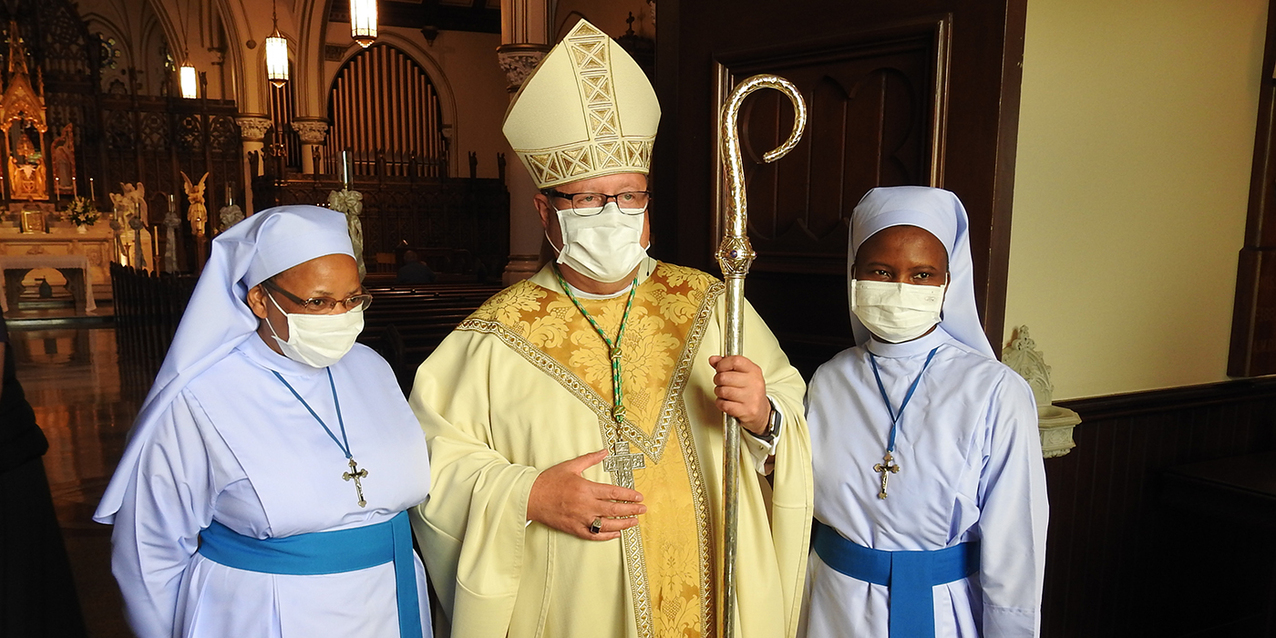 Two sisters, Mother Mary Agnes Eichler and Sister Mary Cyrilla Zotter from Vienna, Austria, arrived in early December 1921. They took up residence on Euclid Avenue near University Circle. On Christmas night 1921, Bishop Schrembs solemnly inaugurated the exposition of the Blessed Sacrament and designated the residence as a cloistered space.

As more sisters arrived, a larger monastery was needed. The bishop searched for a new location, settling on the former St. Paul Episcopal Church on Euclid Avenue. The church, built in 1875, previously served many of Cleveland’s well-heeled industrialists who lived on the storied Millionaire’s Row, as Euclid Avenue once was known. Cleveland grew, with population – and St. Paul’s congregants – moving further east. In 1928, needing a larger worship space, the church relocated to Cleveland Heights. That left the building at East 40th Street and Euclid vacant.

Bishop Schrembs saw the old church as an opportunity to fulfill his dream of establishing a larger monastery in the city where the Eucharist could be adored 24/7. He purchased the Gothic church in 1930 and had it refurbished. On Oct. 2, 1931, in the midst of the Great Depression, the Church of the Conversion of St. Paul was dedicated. A larger monastery also was built for the sisters.

St. Paul Shrine became a parish church in 1949, serving in this capacity until 2008, when it reverted to shrine status. Perpetual Eucharistic adoration continues at the shrine, which also has Mass at noon Monday through Saturday and at 10 a.m. on Sunday.

In 1978, Cleveland Bishop James Hickey invited the Capuchin Franciscan Friars of the Province of St. Augustine to take over pastoral care of the shrine, which is located in Cleveland’s Midtown neighborhood.

Recently, a $400,000 restoration was completed, including interior painting, and stained-glass window repairs.

Bishop Edward Malesic visited the shrine on Oct. 2 to mark the 90th anniversary of its dedication by celebrating the noon Mass. The Franciscan Poor Clares and Capuchin friars, as well as shrine benefactors and friends, also attended. The friars concelebrated the liturgy.

“One of the real joys of being the shepherd of a diocese is that I have the opportunity to visit beautiful sacred places and meet deeply faithful people. I am especially blessed to be invited to this magnificent Conversion of St. Paul Shrine and meet people who have dedicated their lives to God,” he said. “I am truly delighted to be here with you today to celebrate the 100th anniversary of the arrival of the Poor Clares of Perpetual Adoration and the 90th anniversary of the dedication of the shrine itself. May we praise God from whom all blessings flow,” he added.

The bishop thanked the shrine rector, Father Phil Bernier, OFM Cap and Mother Mary James Dyer, superior of the Poor Clares of Perpetual Adoration, for the invitation and for their ministry. The property is home to 16 Poor Clares and three Capuchin friars. The sisters, who remain cloistered, attend Mass in an enclosure at the front of the church.

Father Thomas Betz, OFM Cap, provincial master of the St. Augustine Province, which is based in Pittsburgh, Pennsylvania, concelebrated the Oct. 2 liturgy.

“What a blessing the men and women of these religious orders have been to the Diocese of Cleveland. Your dedication in remaining here in the heart of the city as a sanctuary of prayer is a testament to your love of the Lord and your desire to make him known, loved and served in the midst of God’s people,” Bishop Malesic said.

He noted Oct. 2 also was the memorial of the guardian angels, supernatural beings sent by God to watch over us and protect our souls. “I know the women and men dedicated to this shrine over the years had their guardian angels always watching, always protecting,” the bishop said, reminding the congregation that on Aug. 2, 1980, the Franciscan feast of Our Lady of Angels, a fierce thunderstorm hit Cleveland and caused major damage. Lightning struck one of the shrine’s spires and caused it to collapse.

“The damage could have been catastrophic, but by the grace of God, and without a doubt the protection of our guardian angels, the work to repair the damage was completed within months of the incident,” he said.

“More than that, I believe there is a power that flows from the constant prayer of adoration that blesses this shrine as the sisters, like the angels heard in our Gospel today, always look upon the face of God. The Sisters of the Poor Clares dedicate their life to perpetual adoration of Jesus in the Holy Eucharist. Thank you for imitating the angels, sisters,” Bishop Malesic said. “This sacred place is a wellspring of prayer rising up to the Lord. We are so blessed to have it here in the heart of the city, where it is needed the most.”

He said the bishops in the United States are seriously contemplating a nationwide Eucharistic revival, something he believes is sorely needed. The bishop said he has seen young people, when brought before the Blessed Sacrament, have their lives changed as they begin to have a personal relationship with Jesus. “I love to hear the testimonies of young people who say the Blessed Sacrament has made all the difference in their lives. Let’s get that word out.”

The shrine can be one of the centers of that revival of our devotion to Jesus in the Blessed Sacrament. “I hope so. Keep praying – I know you will. God hears you. I think of the contemplative communities as the engine behind the mission of our Church. You empower us to do great things by God’s grace and providence,” he added.

More information about the shrine and the Poor Clares of Perpetual Adoration can be found here. Click here to learn more about the Capuchin friars of the Province of St. Augustine.