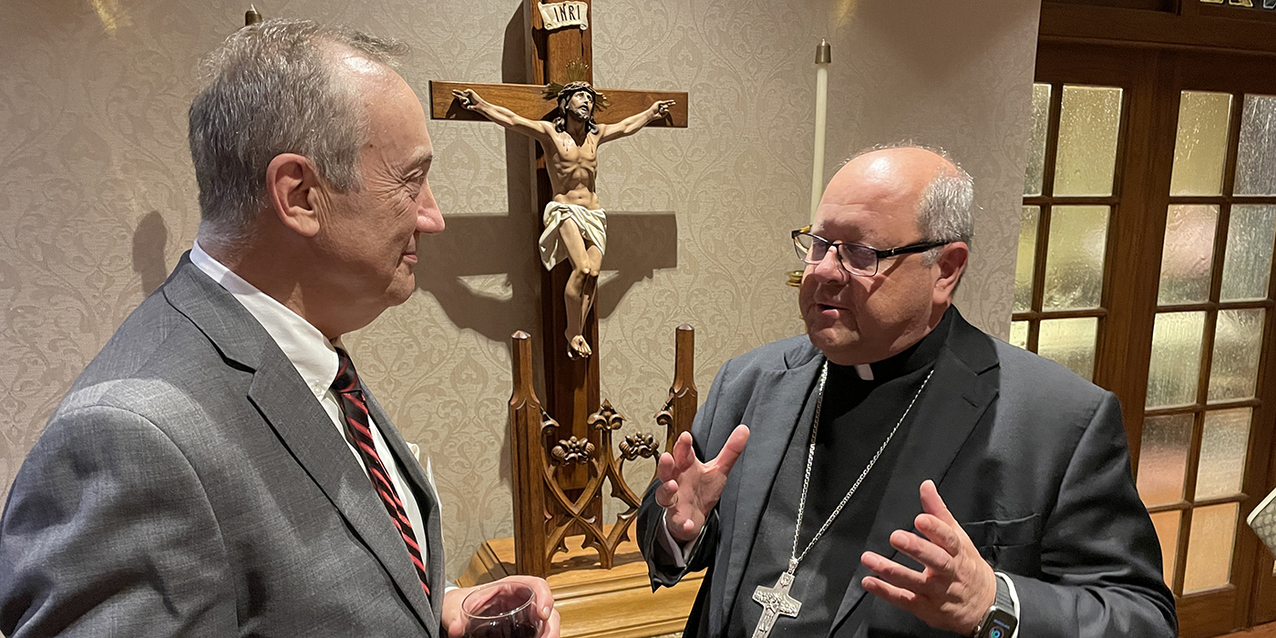 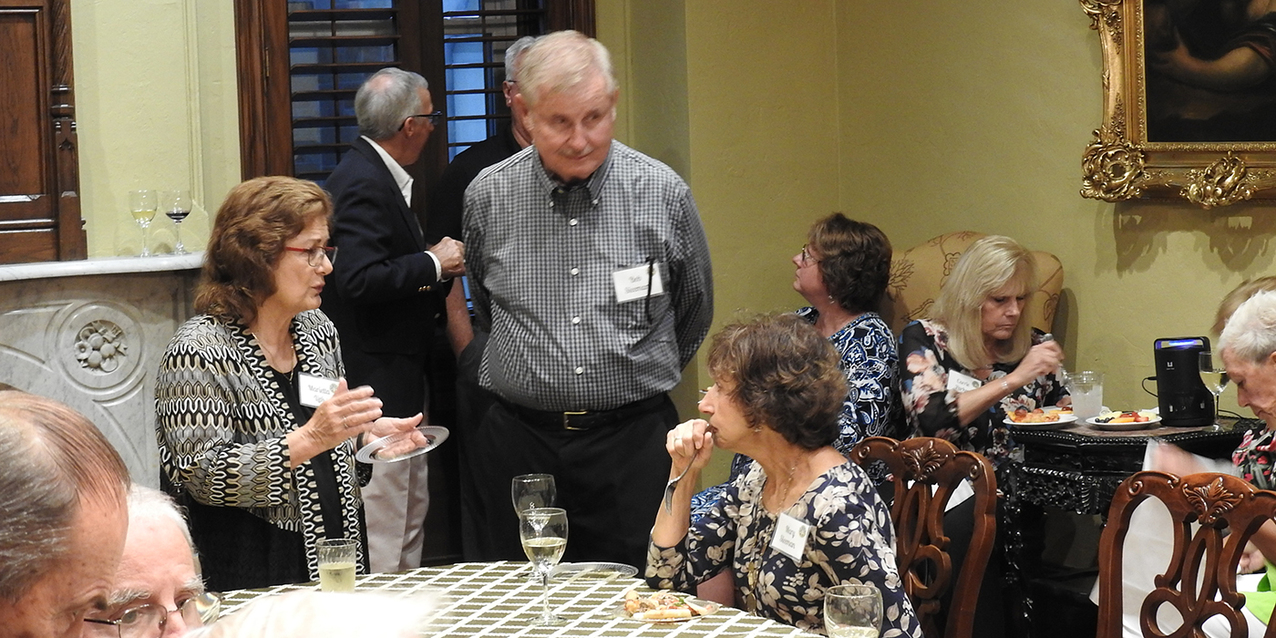 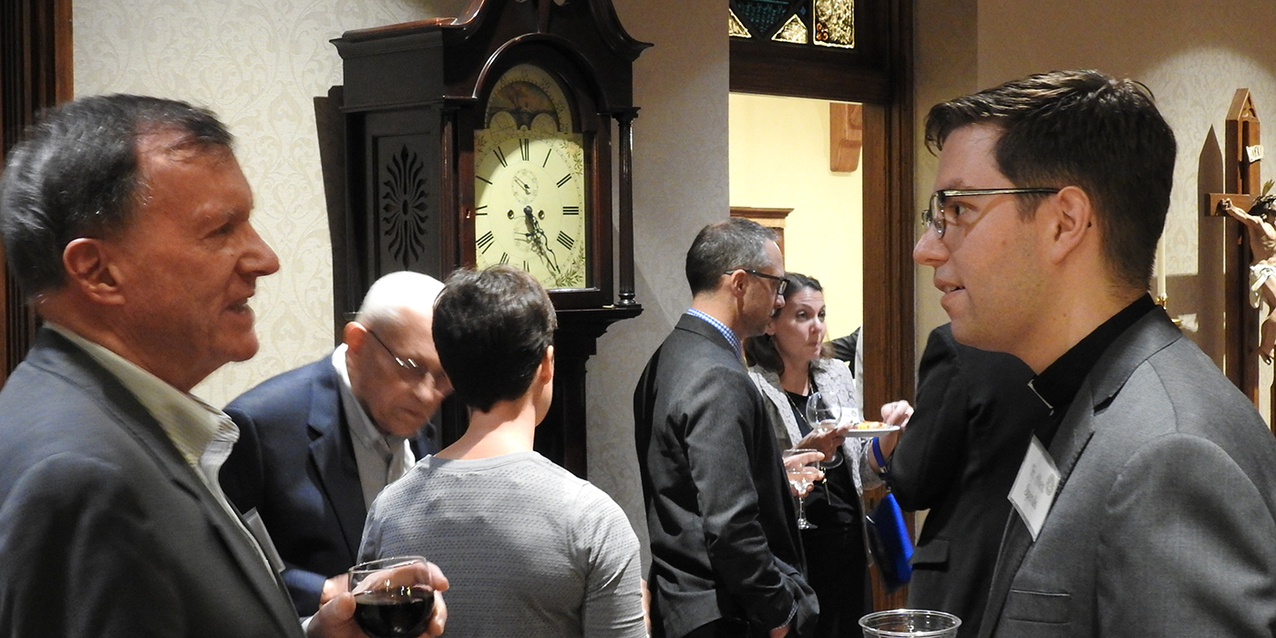 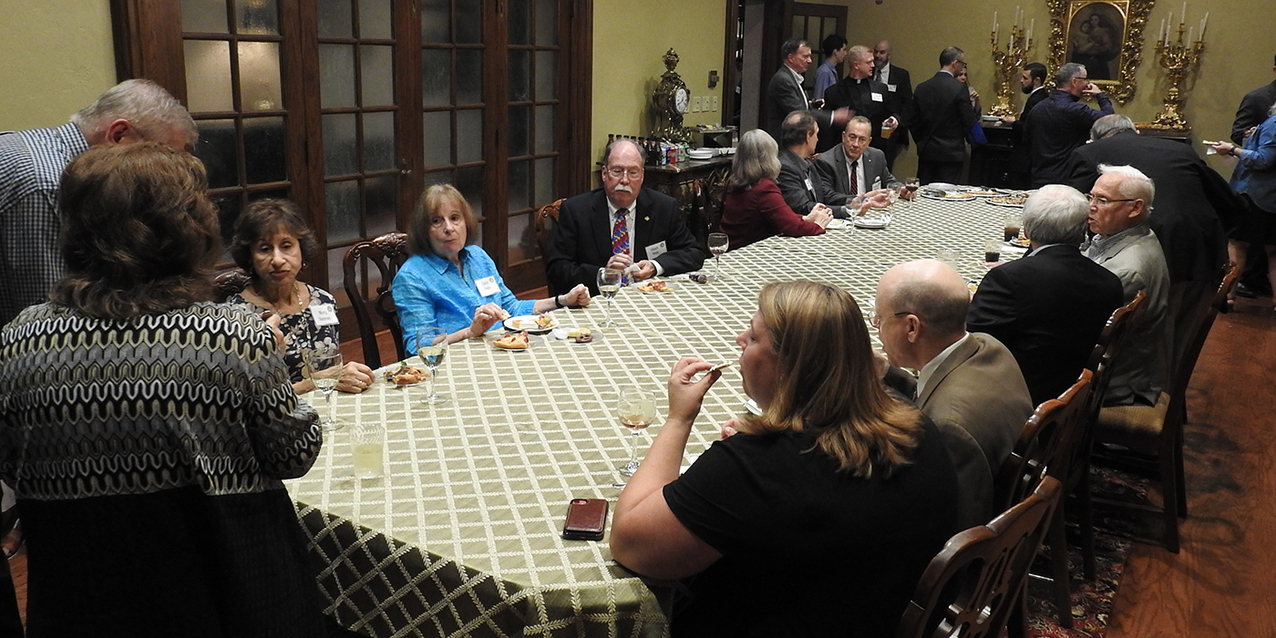 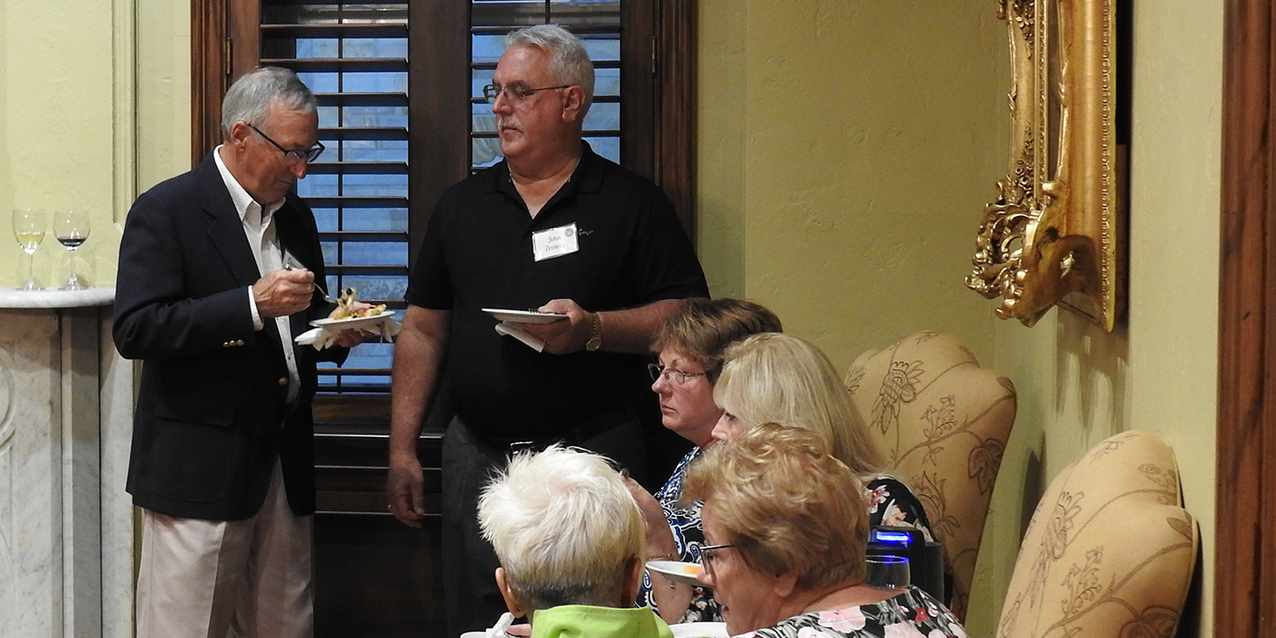 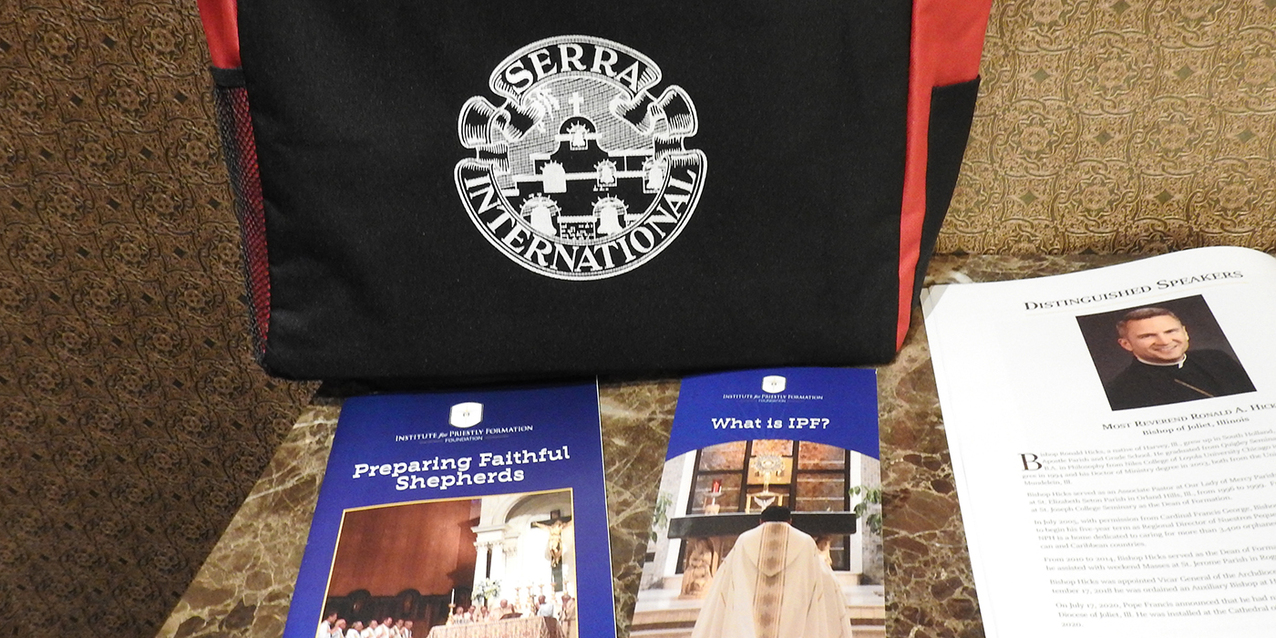 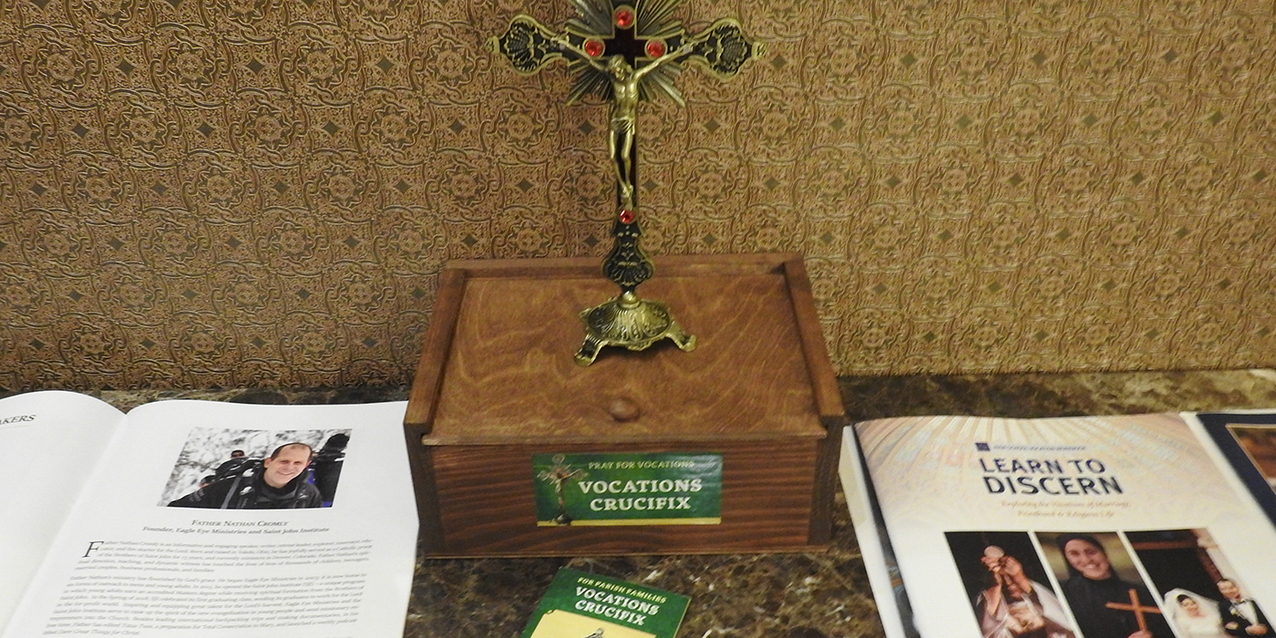 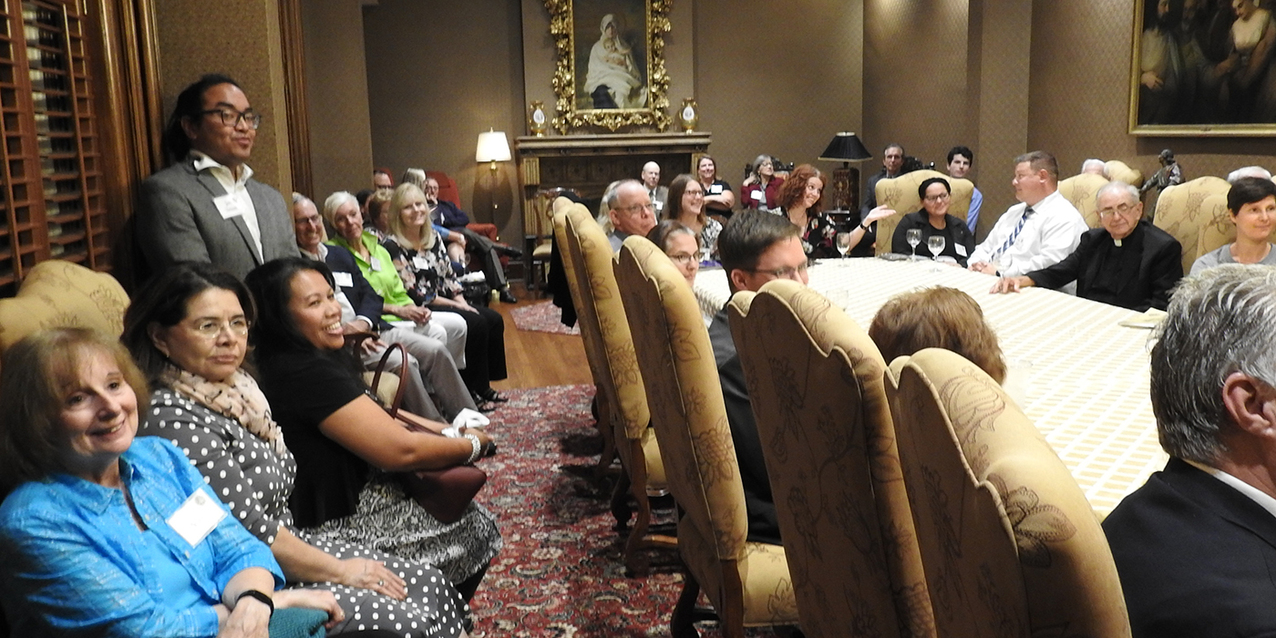 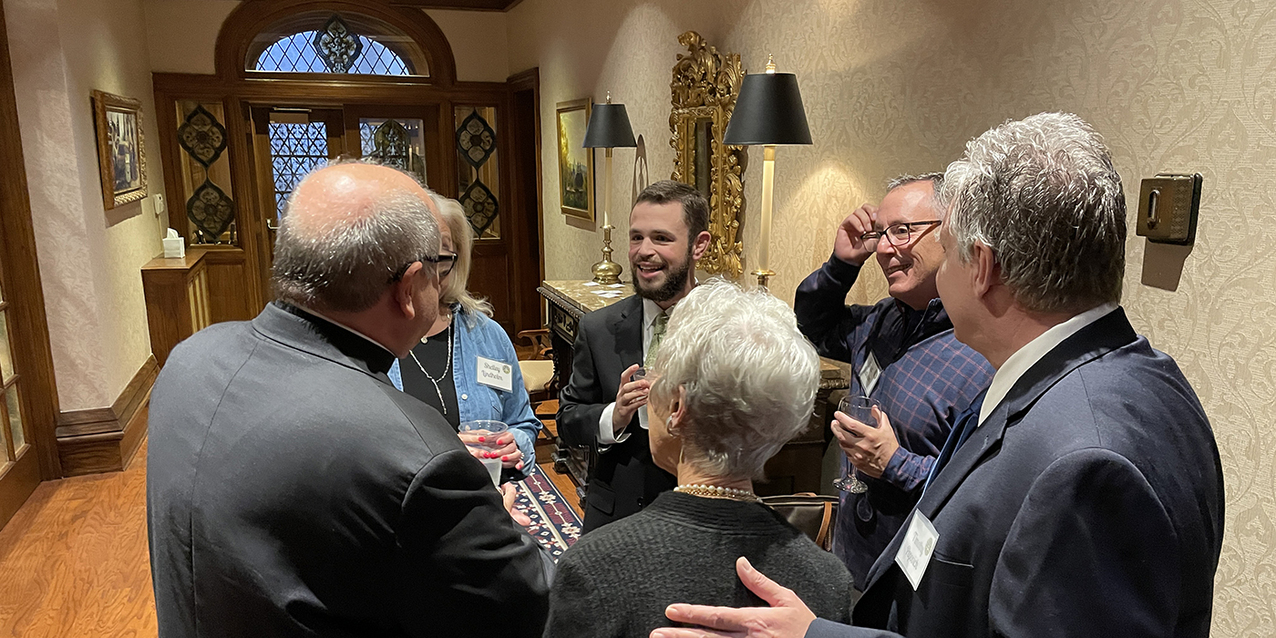 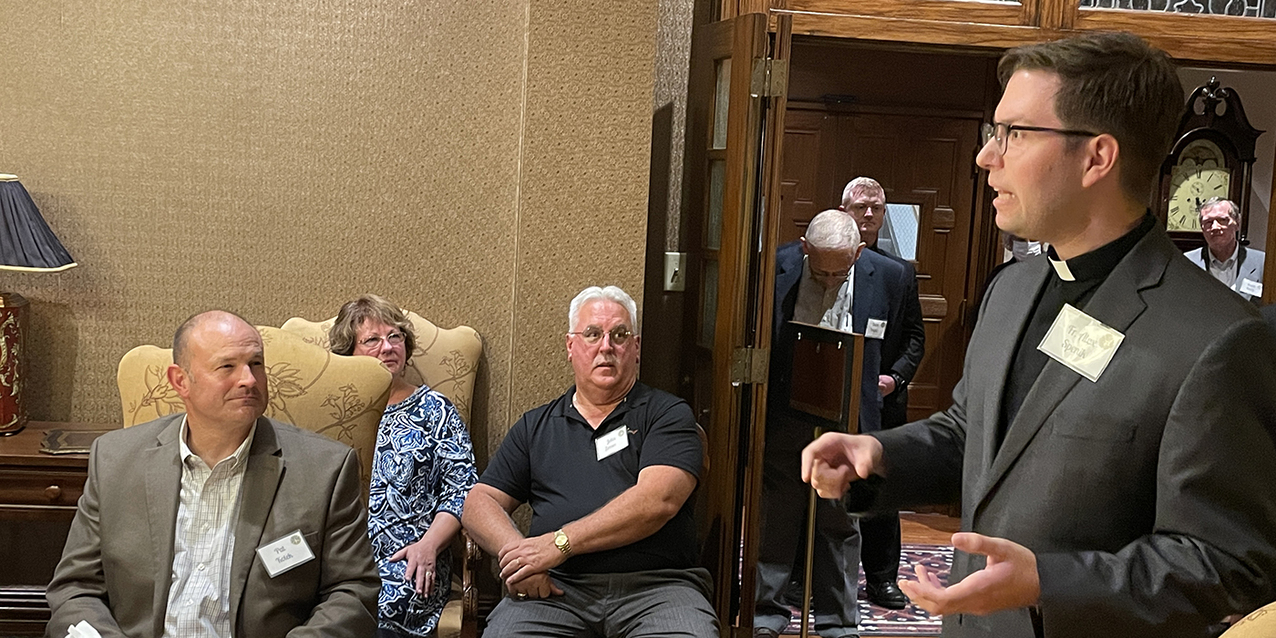 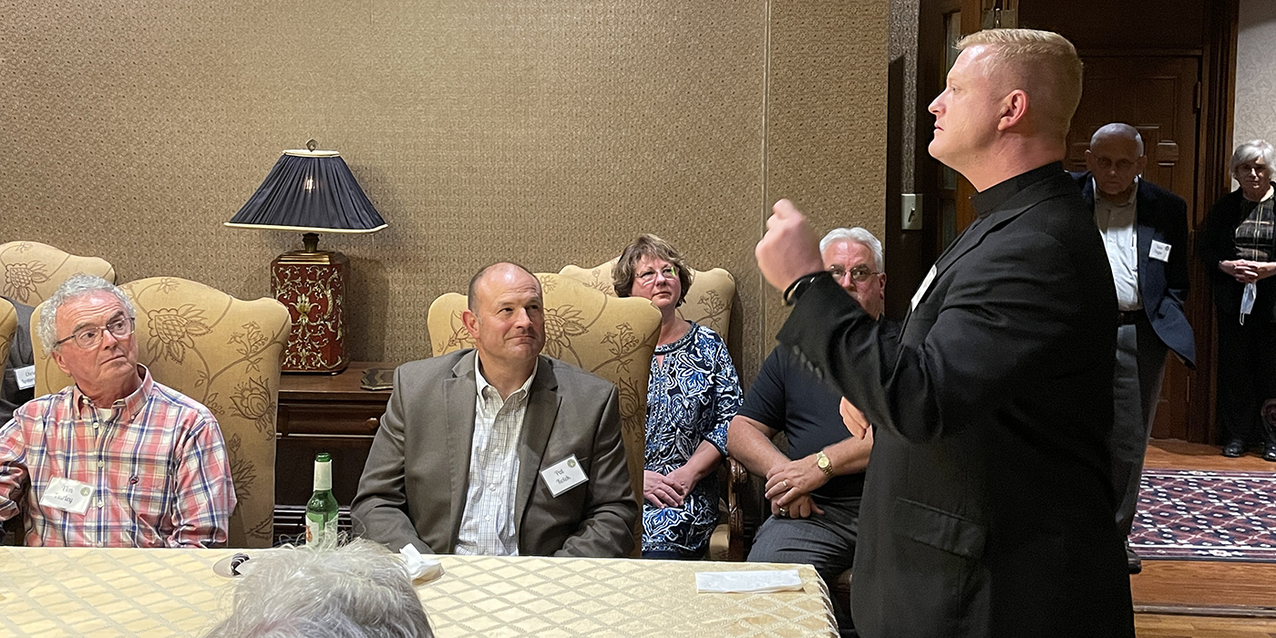 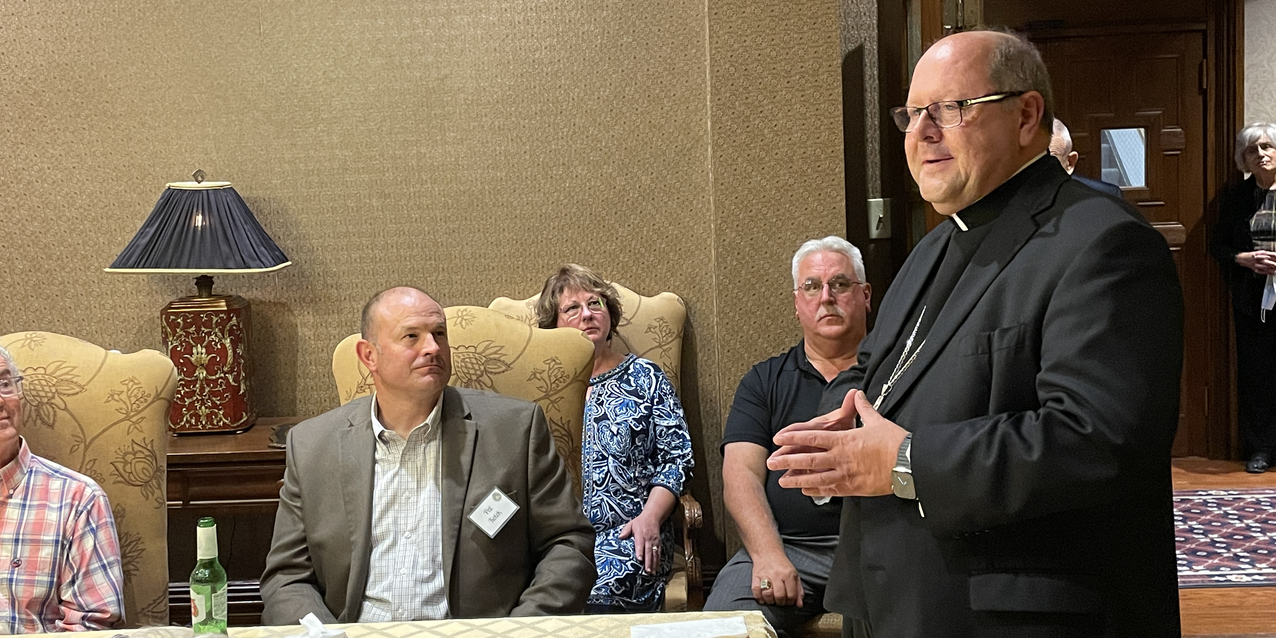 Members of the five Serra Clubs in the Catholic Diocese of Cleveland gathered at the cathedral rectory on Oct. 12 for an evening social, prayer and discussion.

“I’m delighted to welcome you to my home,” Bishop Edward Malesic told the group of about 50 who attended the event. Also present were Father Mike McCandless, diocesan vocation director; Father Alex Spenik, who was ordained in May and serves as parochial vicar at St. Mary Parish, Painesville; seminarian Jeff Lindholm from St. Bernadette Parish, Westlake; and Father Joe Hilinski, pastor, St. Barbara Parish, Cleveland, and the diocesan delegate for ecumenical and interfaith affairs.

Chuck Imes gave a brief history of the Serra Club, which was founded in 1944 in the Cleveland Diocese. There are five clubs in the diocese Akron, Cleveland East, Cleveland West, Lake/Geauga and Lorain. The club is named in honor of St. Junipero Serra, who founded nine missions in California.

The club has a bit of an identity problem, he said, since some people confuse it with the Sierra Club, an environmental organization.

Emily Cudnik, president of the Cleveland West Club, said Serrans foster new vocations, affirm existing vocations and strive to grow in their own holiness. Established in 1935, the Serra Club was recognized in 1951 as a lay apostolate by the Vatican. There are 700 clubs worldwide in about 40 countries.

“Archbishop (Fulton) Sheen asked, ‘Who’s going to save our Church? It’s not our bishops, it’s not our priests and it is not the religious. It is up to you, the people. You have the minds, the eyes and the ears to save the Church,’” Cudnik said.

She invited people across the eight-county diocese to join the Serrans in prayer, asking the Lord for more vocations or to become a friend of Serra. Clubs meet once or twice monthly. In the Cleveland Diocese, Serrans sponsor a dinner for the ordinandi each year. Cudnik said there is a curriculum sponsored by Serra that can be purchased and shared with schools and there is a traveling vocation crucifix that can be reserved for a monthlong visit at a school or parish.

The Cleveland West Club wrote to Mother Jeanette Estrada of the Mercedarian Sisters of the Blessed Sacrament to ask if they could adopt the entire convent at Our Lady of Mount Carmel Parish in Cleveland.

“Mother Jeanette responded with one word, ‘YES!’,” Cudnik said,. “And she said they would celebrate with a Christmas party.”

Father Spenik said the late Cleveland Bishop Anthony Pilla referred to the Serra Club as “furnaces of love that keep the Gospel moving like air through our lungs.” He related his personal experience with Serrans who supported him as a seminarian and continue to pray for him. Father Spenik said he spent three months at the diocesan mission in El Salvador during his seminary year and the Serrans supported him spiritually, “being a furnace of love. It was incredible. I wouldn’t be here without people like you. Thank you for what you do, for being that furnace of love.”

Lindholm, who is in his second year at Saint Mary Seminary, said he got a message from a Serra family who wanted to “adopt” him. “I have a family,” he said, so he was confused at first. He envisioned Serrans as older women who prayed for vocations. “I learned I was wrong. I was ‘adopted’ by a 30 something family. They are leading us closer to Christ. They’ve shown me the face of Christ,” Lindholm said. “The Diocese of Cleveland is wonderful ground for vocations because of the Serra Club. The Church is nothing without you embodying the work of Christ. I just wish more people knew about it. Thank you for embodying Christ and following his will.”

Father McCandless said someone asked him what he did all day as vocation director.

“I eliminate lies,” he said.

In college, Father McCandless said he heard a voice telling him to stay in school, study and run track. But Serrans were praying daily for vocations and that he would be open to God’s call. He shared the story of some people at his home parish – Holy Family, Stow – who watched him serve Mass. They asked him if he’d ever considered the priesthood, telling him he belonged on the altar.

“Jesus tells us he is the voice that eliminates the other voices,” Father McCandless said, adding that it takes sacrifice to answer God’s call. “But we want people in the seminary who are there because they are open to sacrifice. Are you willing to follow God?” he asked. He said we must be willing to ask the question about what adventure God wants us to live.

“All novices and seminarians struggle from time to time,” he said, telling the Serrans, “There is fruit in what you do. Your work impacts both heaven and earth.”

“Every priest knows there’s a Serra Club,” he said.

The bishop told the group that Christ sees us with our gifts and talents. We look to Jesus to save the Church, but he looks to us to work together. “Pope Francis tells us we must row the boat together,” he said.

Referring to the upcoming Synod on Synodality, Bishop Malesic said we are being asked to discern what the Lord is calling us to do for the Church and our parish. “How do we walk together to do this?” he asked. One way, he suggested, is to foster a culture of vocations.

“Our vocation is to be holy. We are all called to be saints, to go to heaven. There are different ways to do this,” he said, explaining that some of us are called to married life while others are called to the single life. Those in single life may be called additionally to the priesthood or to vowed religious life.

“There’s not only a crisis in priestly vocations but also in marriages in the Church,” he said.

“If you’re called to marriage and become a priest, you’ll be miserable because you’re not following your call. The same is true for a married person who is called to the priesthood,” he added.

“I guess that means God only wants ugly, stupid and lazy priests,” he quipped, adding, “Not!”

“Priests are always under attack because the devil wants to attack anything that points to God,” he explained. And he bishop also pointed out that “Priests come from marriages,” noting how important that vocation is, also.

“We all must row together to save the Church. I don’t make priests – only God does that.”