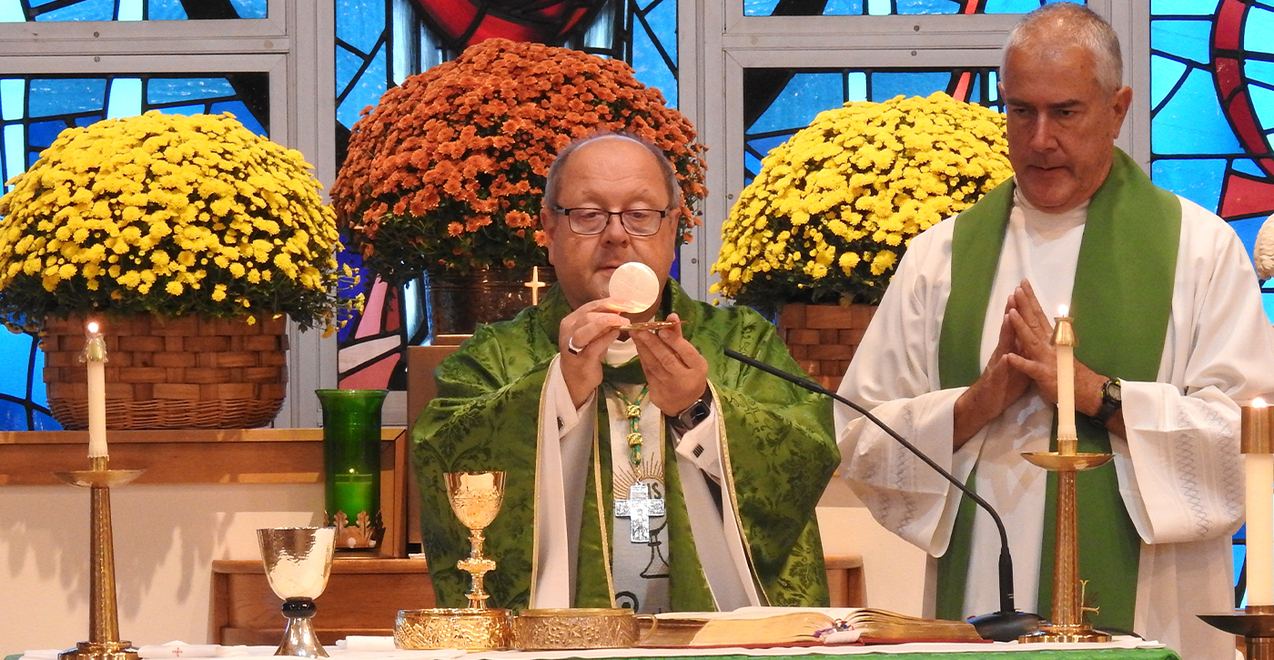 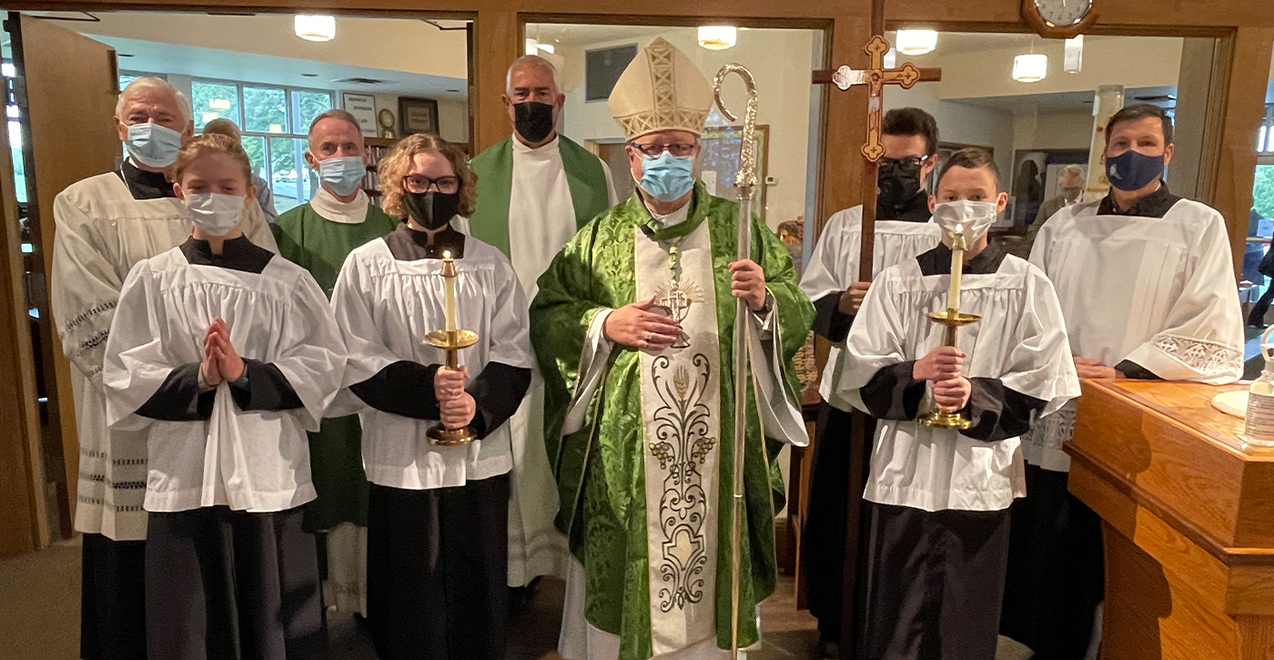 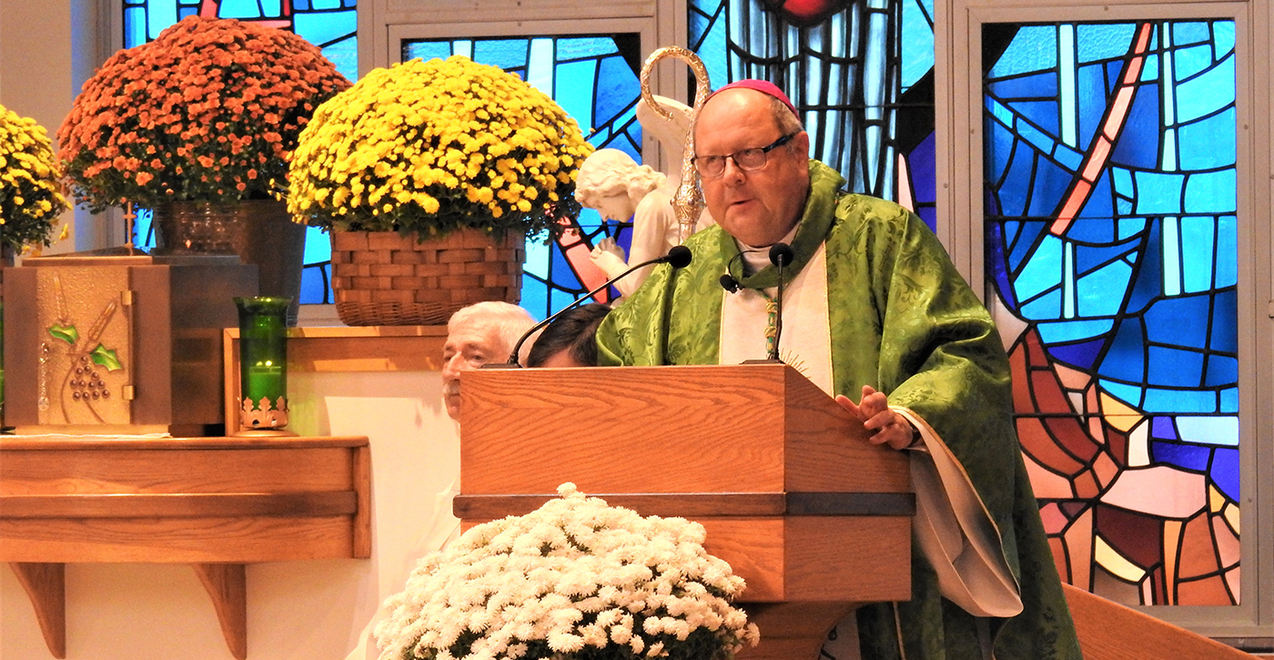 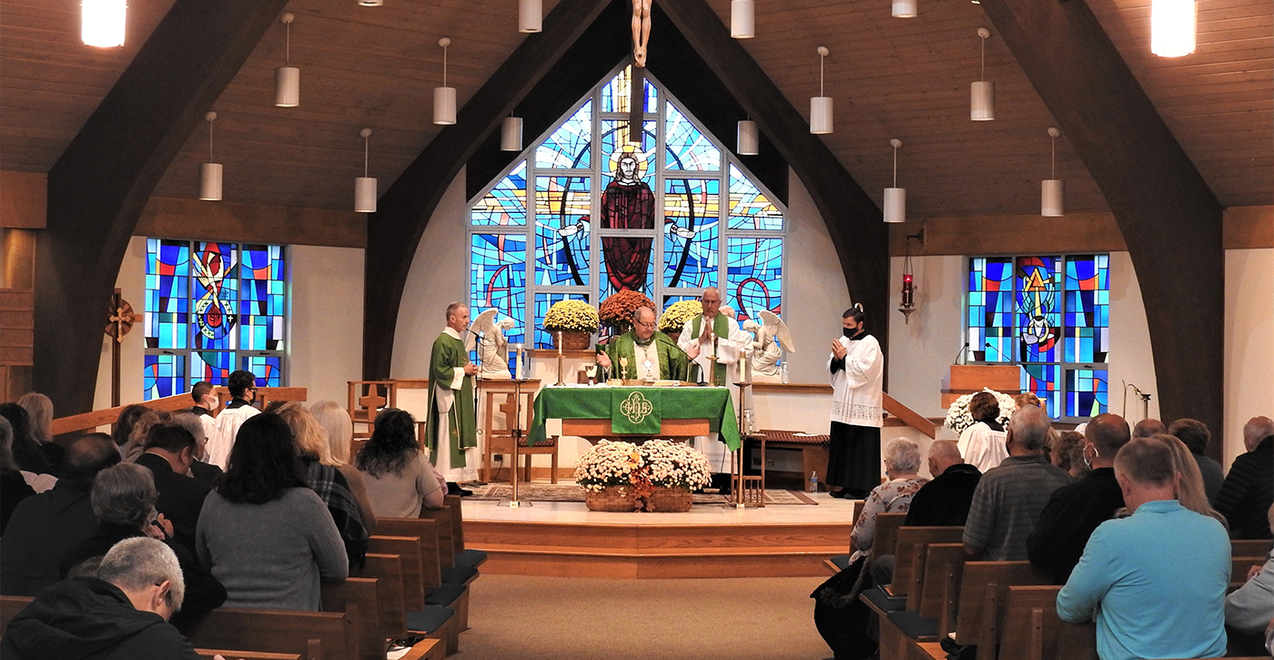 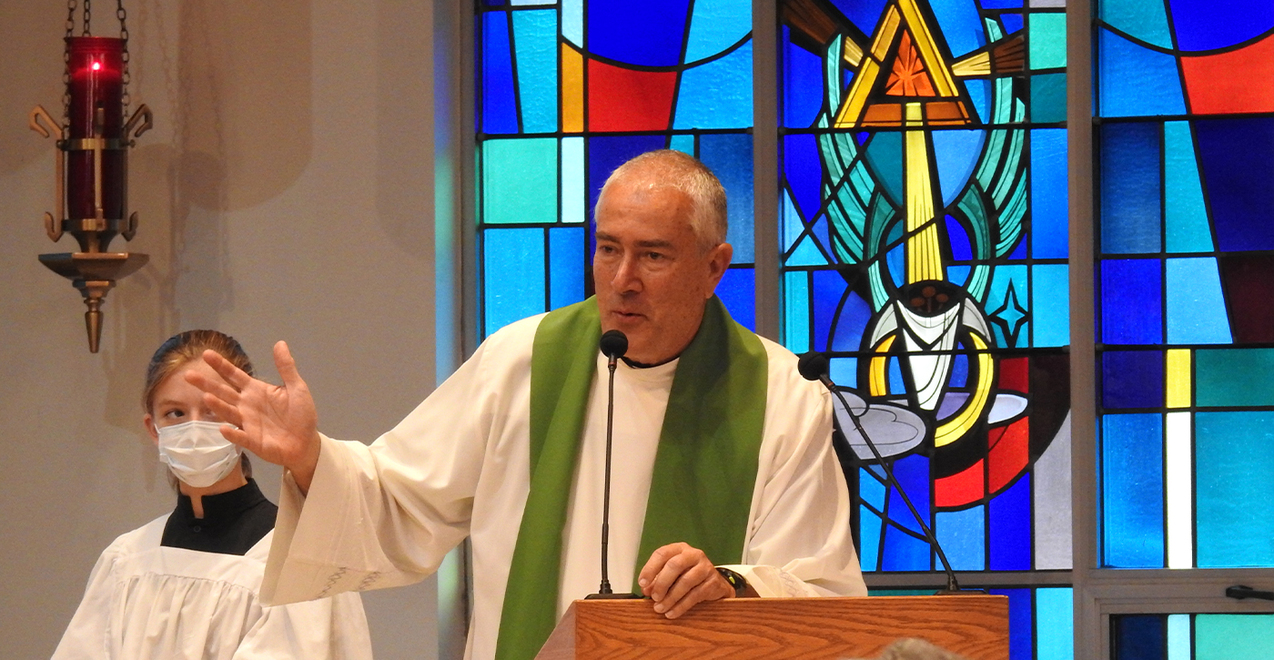 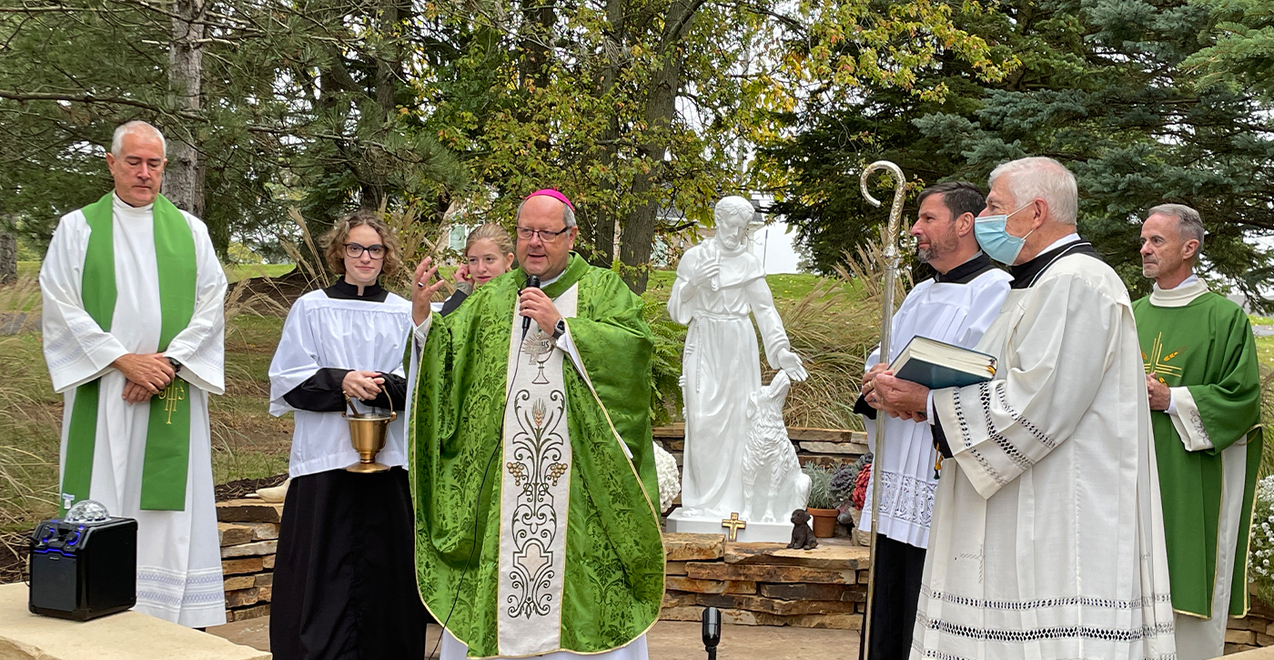 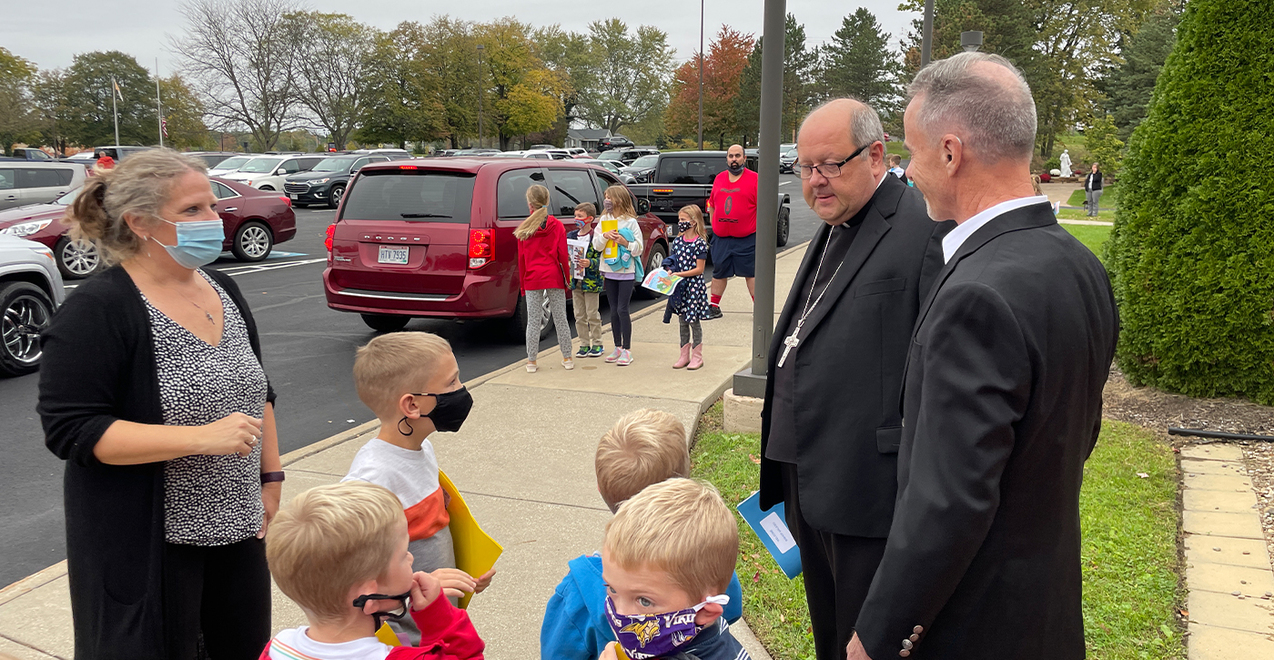 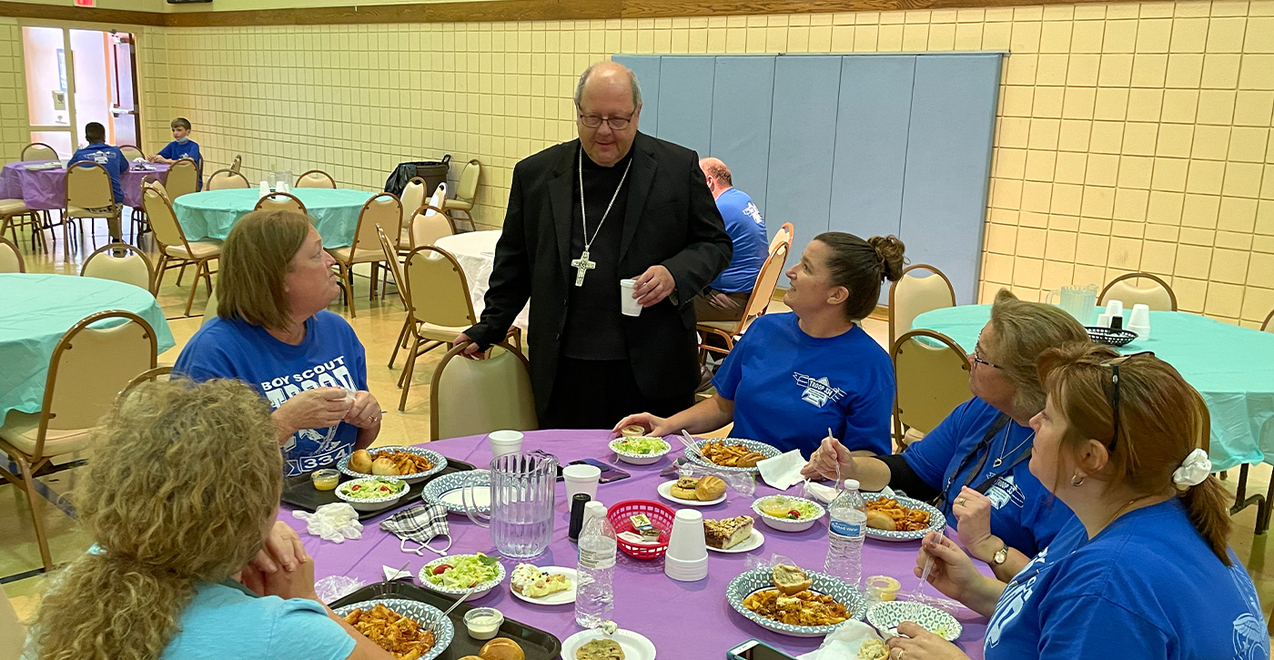 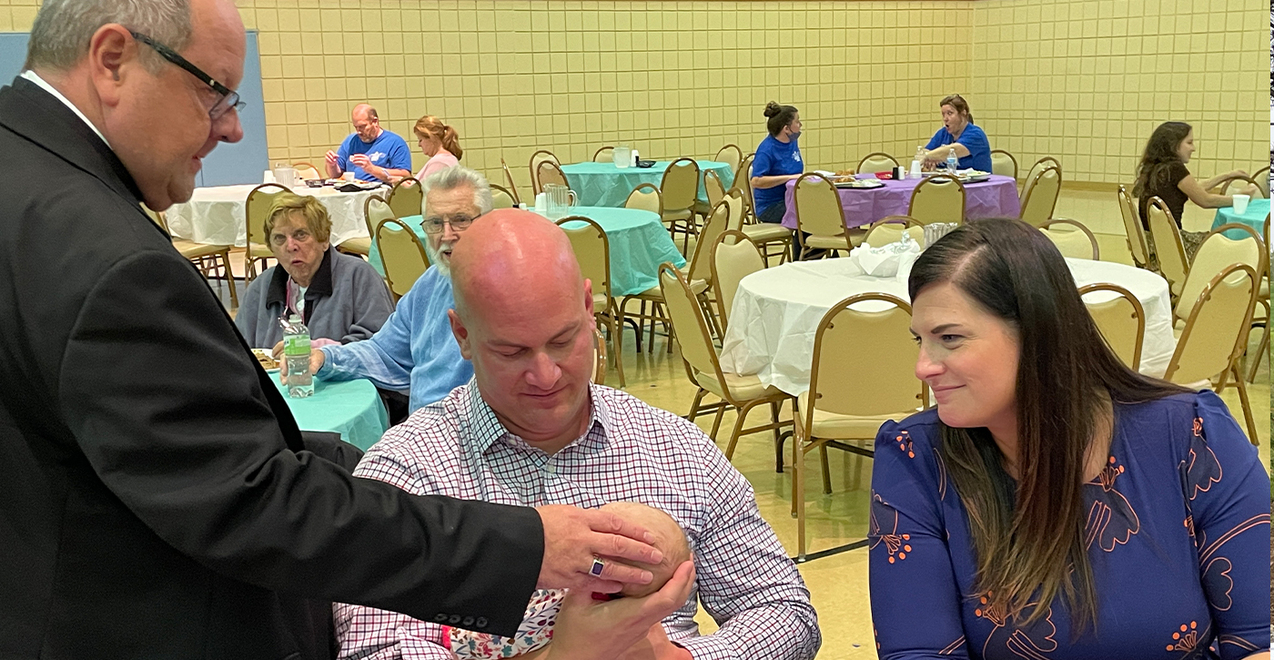 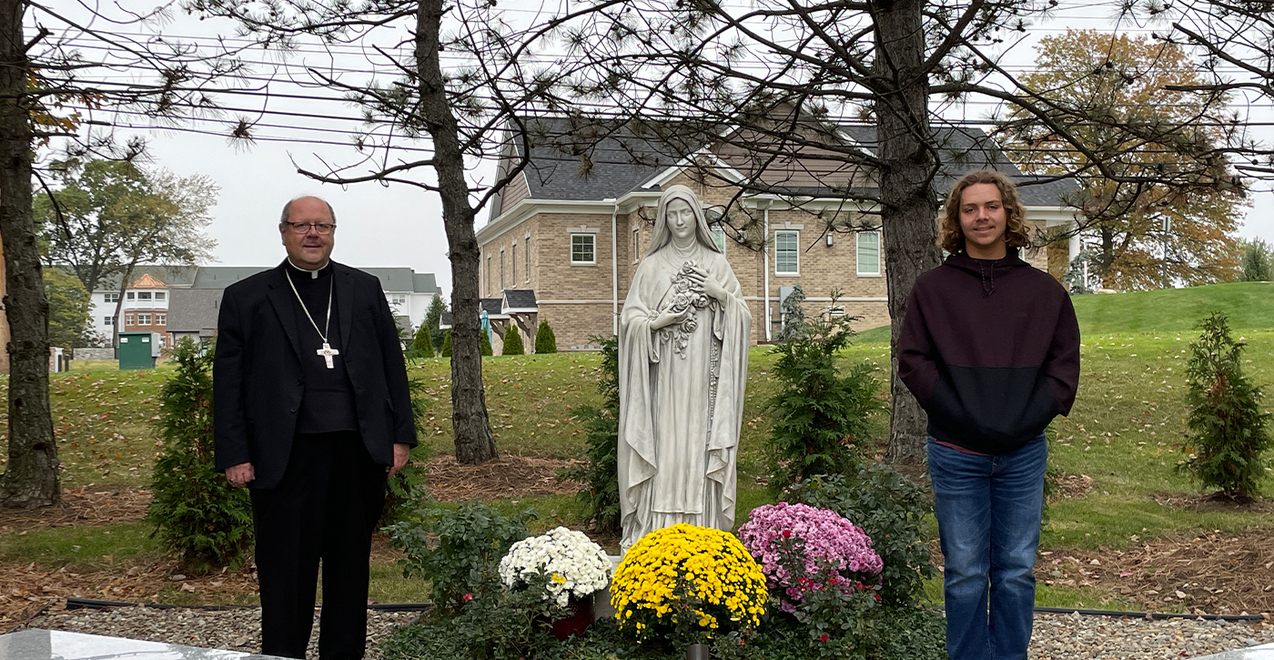 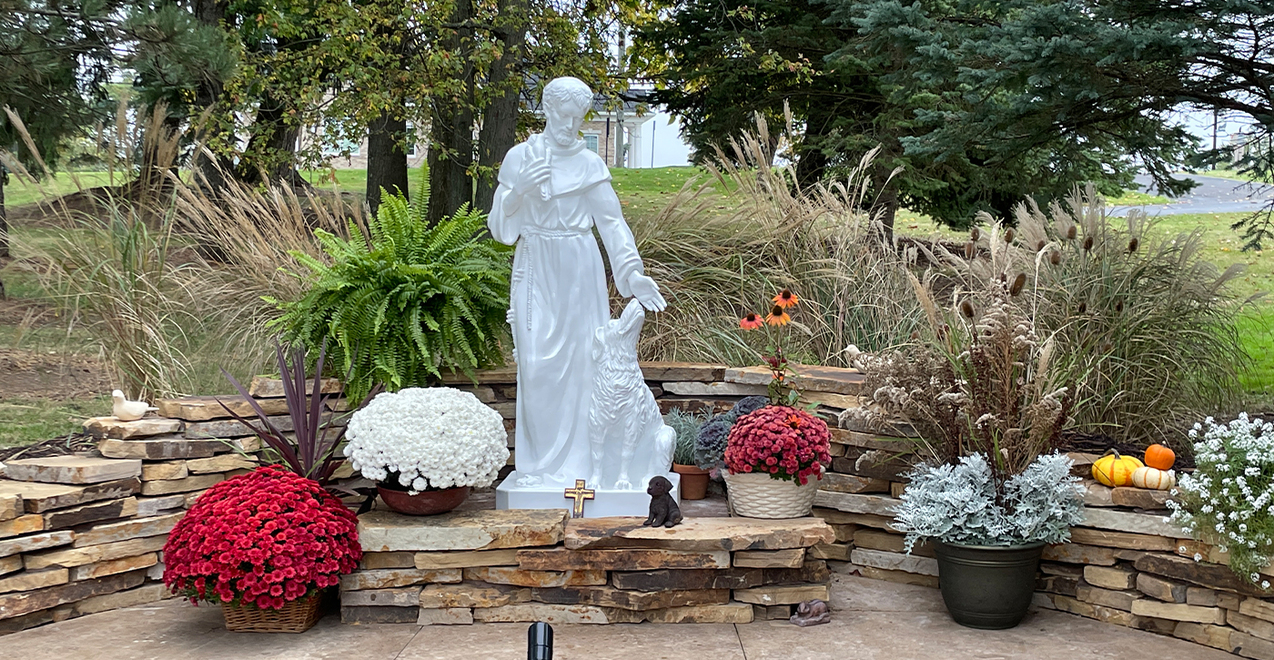 Bishop Edward Malesic made the most of his trip to Queen of Heaven Parish in Uniontown. Parishioners and Father David Durkee, the pastor, welcomed him on Oct. 24 for his first visit to the parish.

The bishop began by presenting his vocation talk to parishioners and some PSR students during the parish’s annual vocation breakfast. They learned how he spent three years in college as a biology major, intending to work in a laboratory in a hospital – until his vocation surfaced. He attended the Pontifical College Josephinum in Columbus where he continued his priestly formation and earned a master of divinity degree before being ordained on May 24, 1987 in his home diocese of Harrisburg, Pennsylvania. Later, he earned a licentiate in canon law, served in campus ministry, as parochial vicar, parish pastor, in the Harrisburg tribunal and as judicial vicar before being named the fifth bishop of Greensburg, Pennsylvania in 2015. He was installed as the 12th bishop of Cleveland Sept. 14, 2020.

After the vocation talk, Father Durkee and Deacon Stephen Makara accompanied the bishop across the parking lot to the church, where he celebrated the 11 a.m. Mass.

“You certainly believe in the adage if you feed them, they will come,” the bishop quipped, referring to the vocation breakfast and the rigatoni dinner scheduled after Mass. “Thanks for the community I find here.”

In his homily, Bishop Malesic recalled a young man at his parish in Harrisburg who was blind and served as a lector, using Braille to “see” the readings. “I used to marvel when he would get up to the pulpit, bring out his Braille reading, place his hands on it and begin to proclaim the word of God. As I got to know him better, I often thought he could sometimes see more than we could,” he said.

Although we take our eyesight for granted, the bishop said there are many ways to see the same thing – and sometimes not with our eyes. “It is the spiritually blind who are truly in the dark,” he added. Referring to the young blind man, he said, “Even if his eyes couldn’t see light, his heart could.”

The Gospel told the story of Bartimaeus, a blind beggar, who was sitting along the road depending on the charity of passersby. He heard Jesus was coming and had heard he could work miracles, the bishop said, so he was beginning to have the stirrings of faith. He called out to Jesus, asking him to have pity on him, teaching us that we should have enough faith to ask Jesus for help.

“The great Scripture scholar William Barclay once said there are three things that cannot come back: the spent arrow, the spoken word and the lost opportunity. Bartimaeus knew that the opportunity was here, now, and he wasn’t going to allow it to pass him by,” the bishop said. The blind man could see more than those sighted people around him could, he added.

The disciples told Bartimaeus to be quiet, the bishop said, much like the people who by their words and actions can keep us from meeting Jesus along the way. “While we are still in October, designated as Respect Life Month, we should be careful that we do not leave the blind, the poor, the lame, the unborn, the forgotten on the side of our roads as we pass them by and wish that they would not bother us. No, bring them to Jesus. Call them,” the bishop said.

Jesus called Bartimaeus, who sprang up, and asked what he wanted him to do for him. We are asked the same question by Jesus, Bishop Malesic said, adding, “Dream big when the Lord asks what he can do for you.” Bartimaeus did, and Jesus gave him his sight.

The bishop quoted Bishop Robert Barron who said that physical blindness is “an evocative symbol of the terrible blindness of the soul that all of us sinners experience.” There are blind spots that keep us from seeing God and appreciating the goodness around us. But if we allow Jesus to touch us, we begin to see him with the eyes of faith, the bishop said.

“And Jesus gives us the courage to let go of our past. He mends our present. He sets us on the path for our future with eyes of faith,” he added.

“With eyes of faith, as people on the way with Jesus, we will be able to see that in the breaking of the bread, Jesus revealed himself to us. And in this Mass, what looks like bread and tastes like wine, is no longer common food, but Christ himself,” the bishop said.

After Mass, Father Durkee thanked the bishop for his visit and shared information on the two outdoor shrines that were being blessed. One, dedicated to St. Therese of Lisieux, was an Eagle Scout project of parishioner Owen Frank. Another parishioner contributed to the shrine in memory of his wife, Kris Wagner, who died recently from pancreatic cancer. The other, in honor of St. Francis of Assisi, was donated by an anonymous parishioner.

The bishop concluded his visit by attending a rigatoni dinner hosted by Boy Scout Troop 334, where he was able to chat with parishioners and pose for photos.

Queen of Heaven Parish has about 1,500 families and 300 PSR students. For more information on the parish, click here.