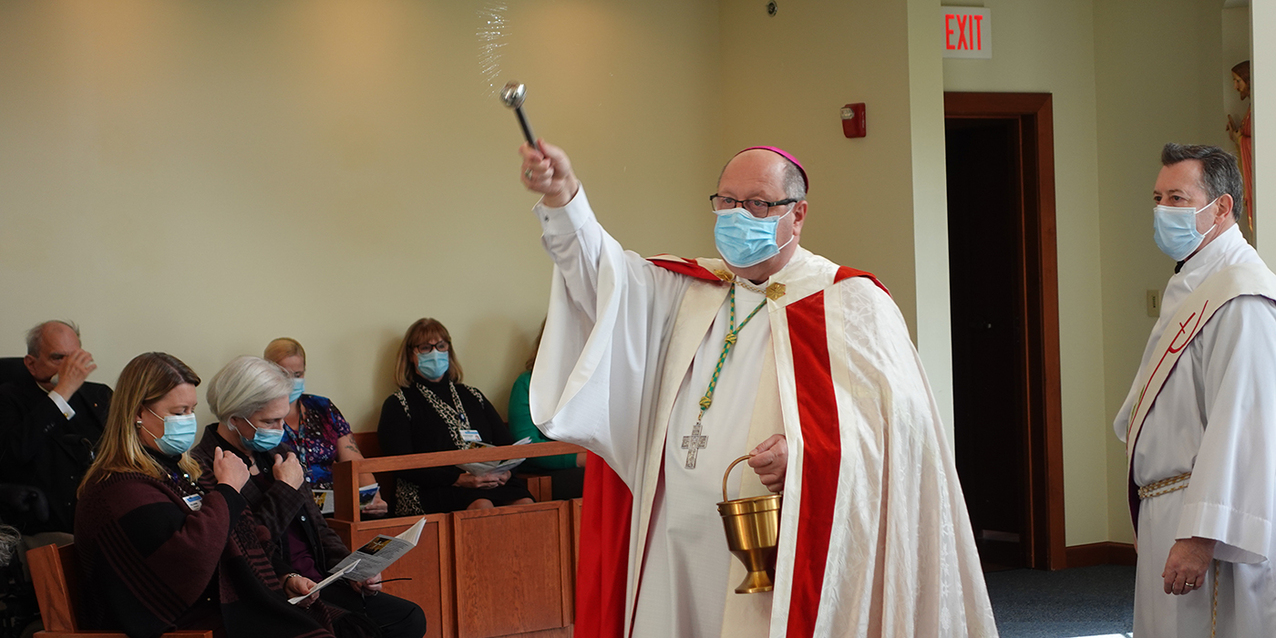 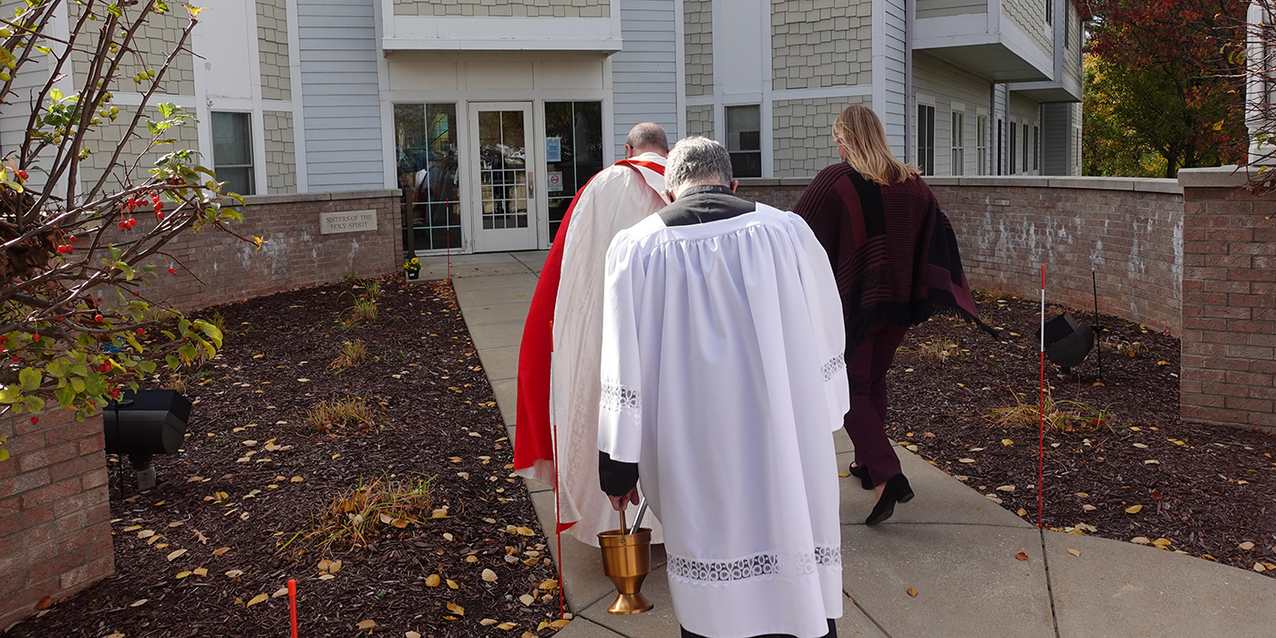 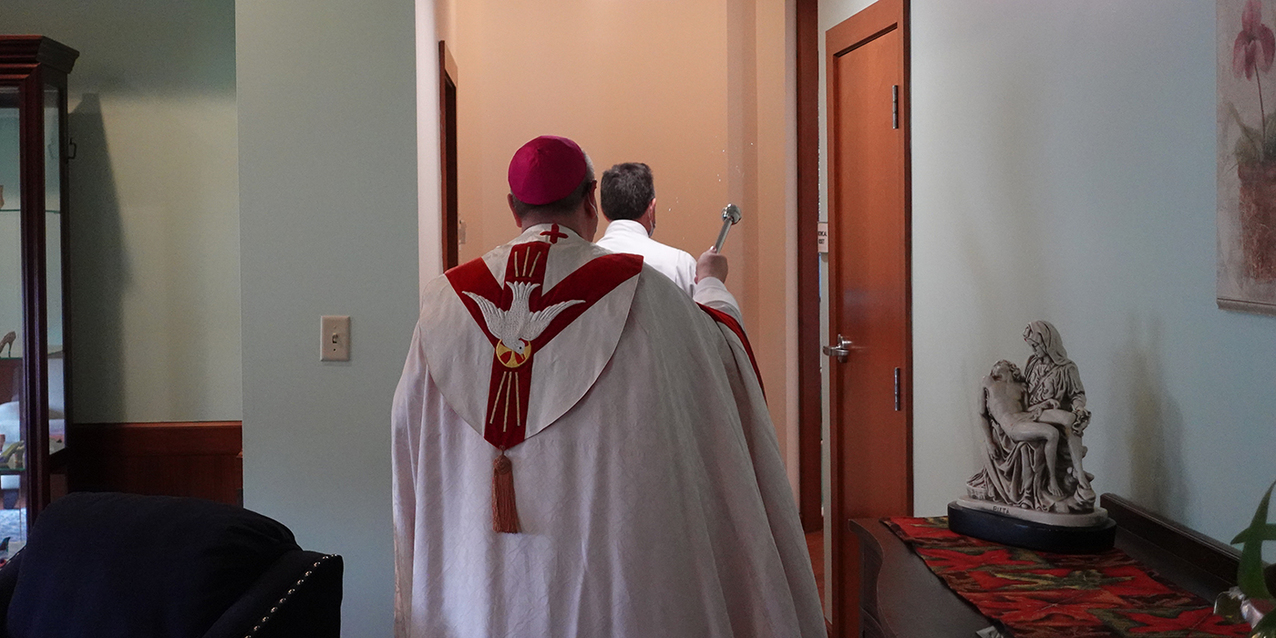 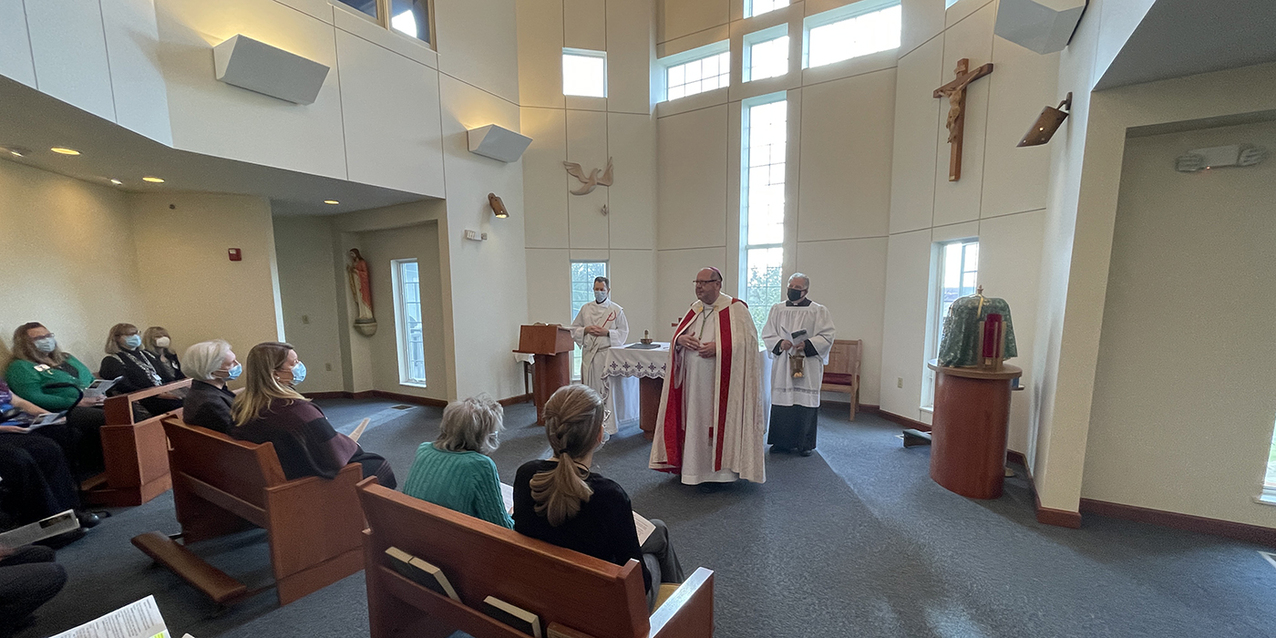 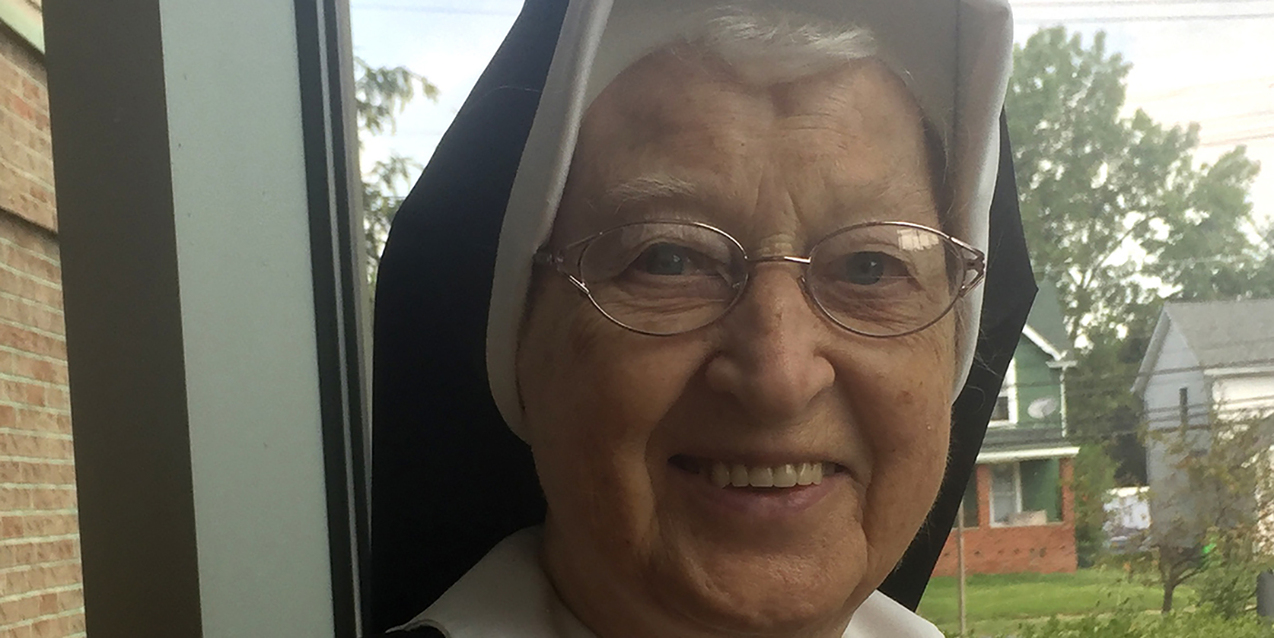 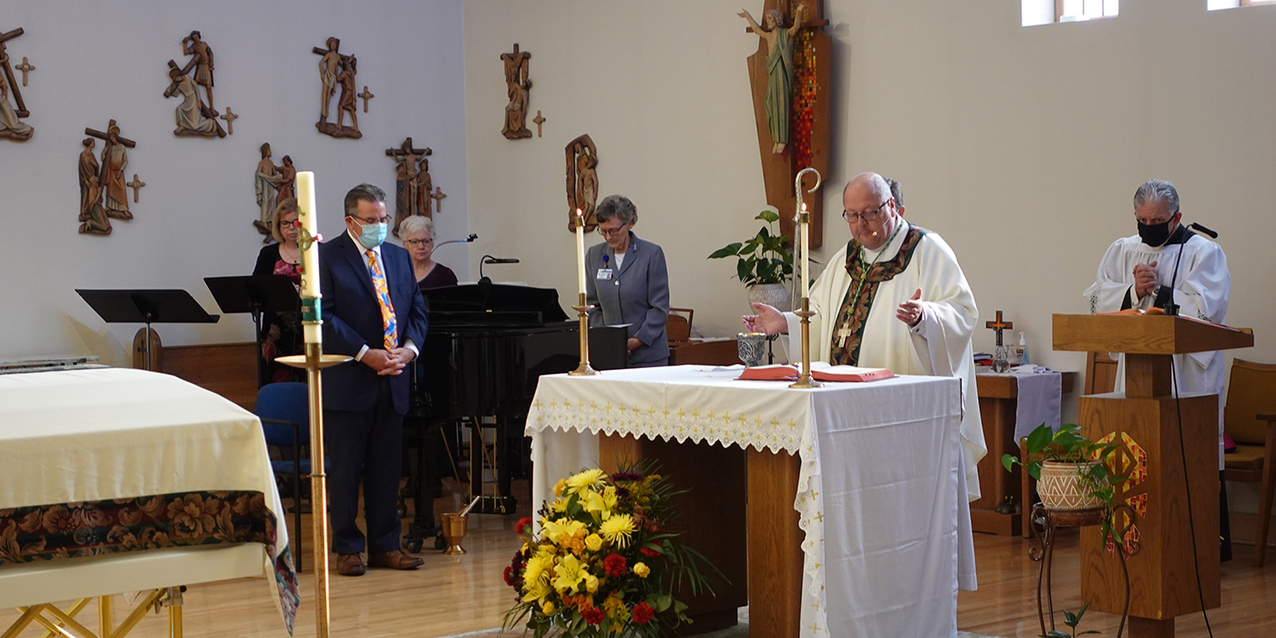 Jennings, the older adult community in Garfield Heights, marked both a beginning and the end of an era during a visit by Bishop Edward Malesic on Nov. 12.

Accompanied by Allison Salopeck, Jennings president and CEO; Deacon Dan Galla, director of mission and ministry; and emcee Deacon Bruce Battista, the bishop walked to Holy Spirit Ridge, Jennings’ new assisted living facility, to dedicate and bless the building and chapel. Previously, the building had been the convent for the Sisters of the Holy Spirit, who founded and ministered at Jennings since its inception in 1942. The sisters gifted the building to Jennings, marking its new beginning. Residents are starting to move into the apartments.

A small group gathered in the chapel for the ceremony, which included music, readings, a brief welcome by Salopeck, a prayer of blessing and concluding remarks by Bishop Malesic, who expressed his gratitude to the sisters for their nearly 80 years of ministry at Jennings and the care it provides to the elderly.

In his homily, Deacon Galla said the deepest longing of the human heart “is to love, to live and love and to be loved, regardless of the vocation God call us to.” He noted it was a historic day, since Sister Margaret Mary’s passing marked the end of an era.

“We are privileged to gather today first to honor a woman who lived her vocation of love to an extraordinary degree. And second, to give thanks to almighty God for what he has done through her,” Deacon Galla said.

He said Sister Margaret Mary, who began doing domestic work at Jennings Hall – as the facility originally was known – graduated in 1956 from Marymount School of Practical Nursing and in 1976, completed the training program for activities coordinators. She served as the first director of nursing for Jennings in the 1950s when the “infirmary wing” was added. She had other roles throughout the years until her retirement in the mid-1990s. Even in retirement, she wanted to remain active and volunteered full time with Jennings residents who were living with Alzheimer’s. She maintained her ministry until a few days before her death.

Deacon Galla said she was “known as the epitome of supervision. Nothing got by her.” However, she also was known for her compassion and great joy, as well as her love of life. She enjoyed crafts, had a reputation for being highly competitive as a bowler and loved to travel, especially with her sister. Among the places she visited were Poland and the Holy Land. She collected ceramic turtles from all over the world and her collection was shared with family and friends after her death.

“She was known as a model of religious life for the younger sisters,” Deacon Galla said, adding she taught wisdom of life as a bride of Christ and gave her whole self to him. “And in return, God gave her his son.”

He said she knew love and lived it with abundance. “Now it is up to us to carry on what she taught us.”

Bishop Malesic called it “a bittersweet moment.” He had been scheduled to be at Jennings to bless Holy Spirit Ridge and when Sister Margaret Mary died, was asked if he could celebrate her funeral Mass.

“It is a great loss,” he said. “It’s amazing that she knew age 15 what she wanted to do.” The bishop said her faith allows her life to continue. “When one life dies, we go forward if we believe in Jesus. Funerals are a sign of hope. We say goodbye and we allow her to continue to live her life with Jesus, whom she loved.”

A Cleveland native, Sister Margaret Mary was born Hedwig Grochowski on Jan. 29, 1926 She was raised in Our Lady of Czestochowa Parish.

Survivors include her sister Anna Varndell (Richard) and many nieces and nephews. She was predeceased by her parents, Alexander and Alexandra Grochowski; and siblings Helen Stokes, Zygmond, Alex, John, Sophie Cummings, Jenny Kontos and Irene Welch.

Donations in memory of Sister Margaret Mary can be made to Jennings.

The funeral Mass, which was livestreamed, can be viewed here.